Dr Jones Sr said:
Most of our Cons here have the same gun policy. I wear the holster with a prop foam-rubber donut shoved in it, it's the most popular part of my costume! Everybody gets a laugh out of it.

Congrats on the Red Wing Mocs! I've been searching but no luck. The problem is that I wear size 14 (regular, or wide).

That Minimum Mouse patch looks like the same pattern I use, though I got mine from a different seller, on Etsy.
Click to expand...

Damn that’s too bad that you haven’t found some Mocs yet. Size 14 does complicate that. I remember you doing a donut and also maybe a banana, which is a great idea. But C2E2 is the biggest con in Chicago, and it’s quite big. So I’m not going to even tempt fate. Maybe another time.
W

I got a couple Hawkins police patches from Minimum Mouse through Amazon. They also have an Etsy account. I must’ve let everyone’s know that the stitching is poor and they do not say Indiana like it appears they do in photos. The yellow stitching also doesn’t go completely to the edge. I don’t recommend them at all.

RPF PREMIUM MEMBER
Here's the patch I got on Etsy from DreamWorldByBrian. I see what appears to be the same patch sold by a number of sellers on Etsy and Ebay.

It's not perfect, with numerous deviations from the screen-used patches, but it's fairly close, and well-made. 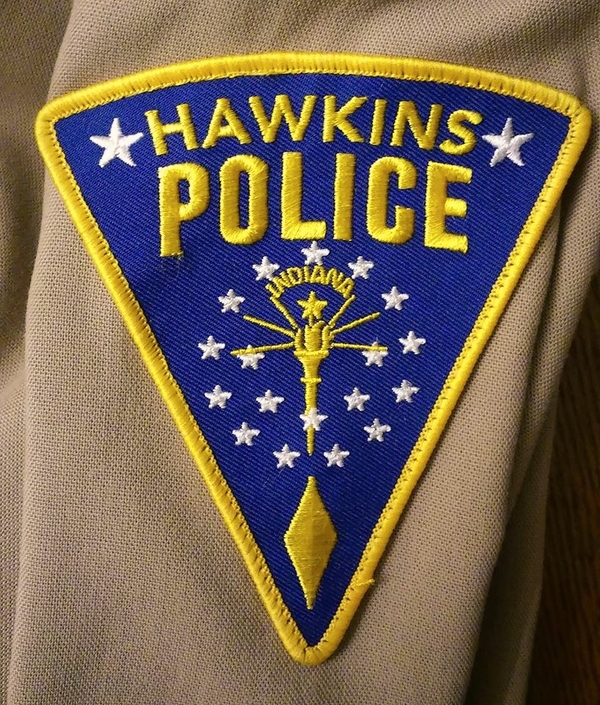 RPF PREMIUM MEMBER
I had a local hat shop make me a replica of Hopper's hat. It's a beaver blend felt in the shop's "Pecan" color. The only inaccurate thing about the hat is the band around the crown. I decided to have that added because, frankly, it made the hat look better. I want this to be my main outdoors/casual hat in addition to being something I can use for cosplaying Hopper. Turned out beautifully. I can't wait to really break it in during the fall and winter. 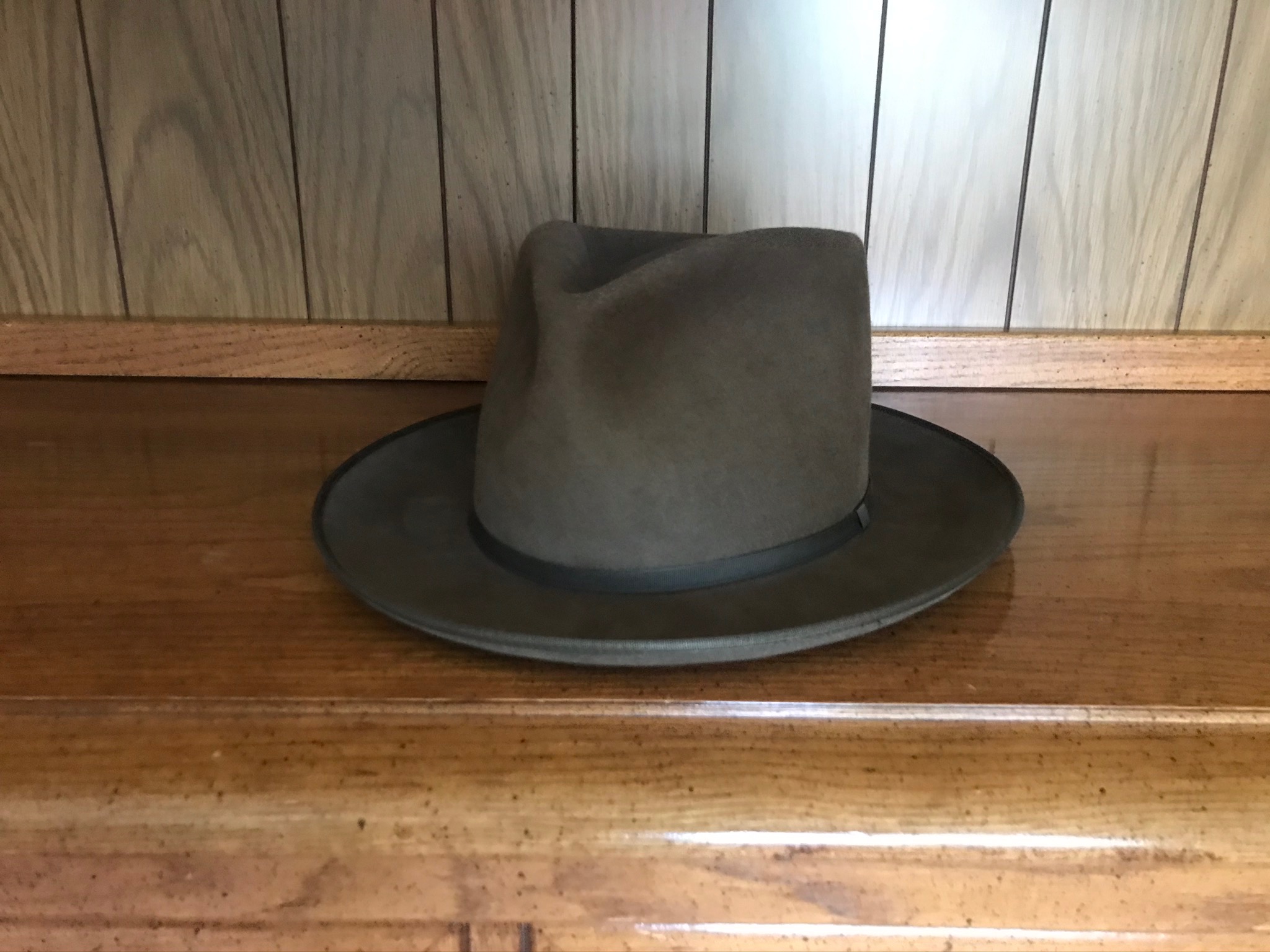 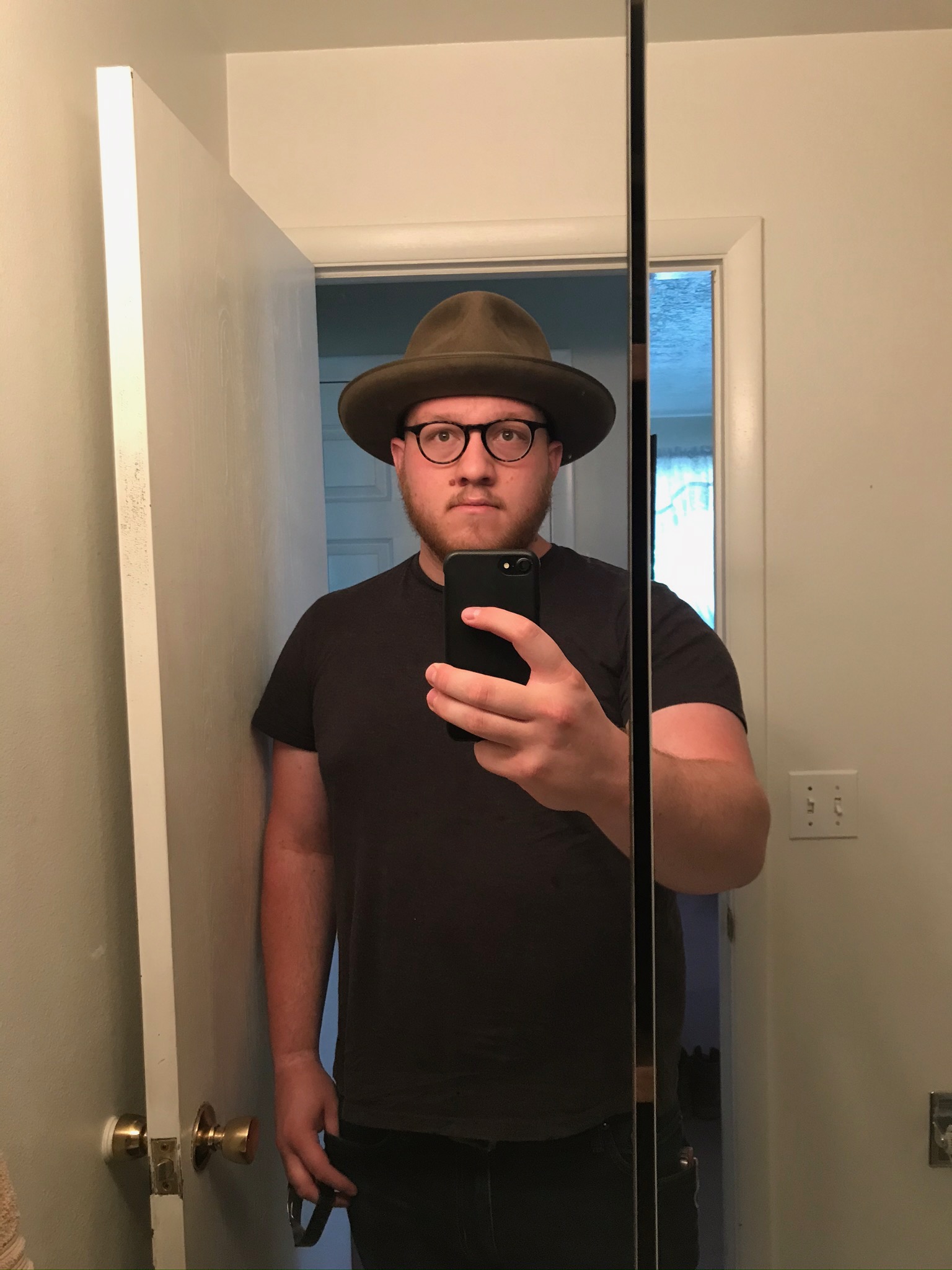 Wow, that is amazing! I love the hat for the hat, being a hopper Hat is just gravy. Beats trying to Reblock my old felt hat

DarthXeladier said:
I had a local hat shop make me a replica of Hopper's hat...
Click to expand...

I agree. The hat looks great.

Just a heads-up, there's a hat which is very close to the Hopper hat called the Biltmore Wilderness, it has just about the right crown, and also the right brim width.

Find many great new & used options and get the best deals for Biltmore 4X Wilderness Collection Hat at the best online prices at eBay! Free shipping for many products!
www.ebay.com

As you see the brim is flat and would have to be shaped. I don't know why this one is like that, I've seen other Biltmore Wildernesses with the typical Fedora style brim the Hopper hat has.

DarthXeladier said:
I want this to be my main outdoors/casual hat in addition to being something I can use for cosplaying Hopper.
Click to expand...

Yes that's exactly what my Stetson Stratoliner is for me, it's my go-to hat.

I wear my Hopper wristwatch all the time, and the boots sometimes too.

It's an Open Road in Caribou. The Open Road has the correct 2.75 inch brim, whereas the Stratoliner has a 2.5 inch brim.

And Caribou is a very close, perhaps exact, colour. (The hat's colour look different in the various photos on that listing, which is a typical Caribou thing.)

Of course the crown would have to be "bashed" or reshaped. 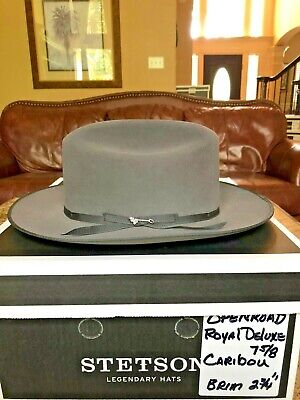 As seen on the heads of actors Jackie Gleason in. The Royal Tennenbaums. OTHERWISE THE HAT WILL BE NEW WITH NO FLAWS. BECAUSE OF THE PRICING WE. "We do not know the size of your head, but we do know the size of this hat".
www.ebay.com

RPF PREMIUM MEMBER
Every time I searched for the right airsoft revolver for Season 1 nobody had it. Either the barrel was the wrong length, or the ejector went all the way to the front, or it had the fat black rubber grips, or it was only available in black, or it was perfect but out of stock.

Just now I checked on Ebay and there's a pile of the correct airsoft revolvers, the Crown Model S&W M629 4 inch Silver.

There is, I think, only one problem: the grips are convex on both sides. As we have seen Hopper's revolver has a convex right grip and a concave left grip, called a "speed loader cut". 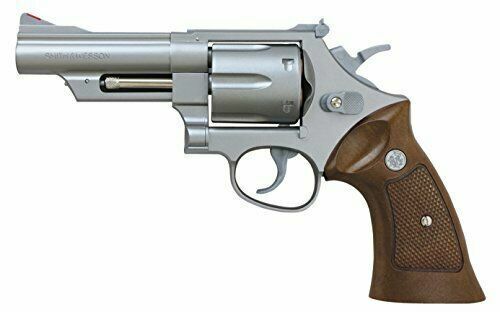 Find many great new & used options and get the best deals for Crown Model Hop up Air Revolver No.5 S W M629 4 Inch Silver 10 Years of Japan at the best online prices at eBay! Free shipping for many products!
www.ebay.com 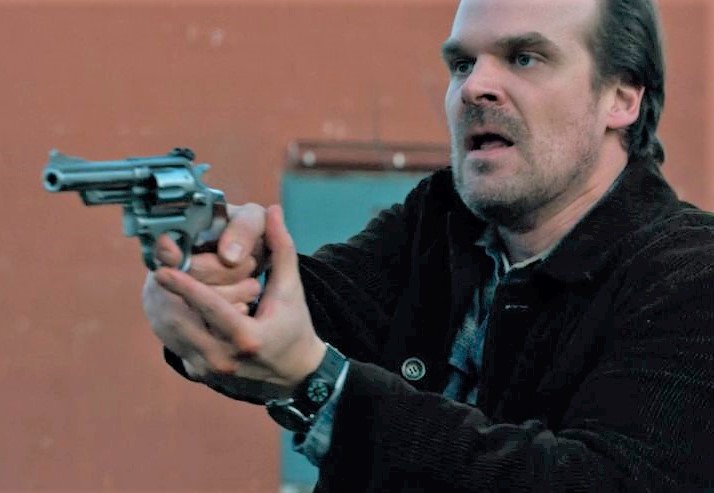 One thing to keep in mind when airsoft hunting is which revolver you want and which holster your’re trying to squeeze it into.

Hopper had a Model 66 (K frame, .357 mag). These seem to only be available in the higher end airsofts. On the other hand, what is much more readily available in the budget-friendly airsofts is the Model 629 (N frame, .44 mag).

There is quite a big size difference here, so if you already have a holster for a K frame, you might not be able to squeeze an N frame in there. YMMV.

RPF PREMIUM MEMBER
Thanks, I wondered about that. I did notice the airsoft was .44 but I didn't know how big a difference there is between than and the .357.

Thanks for posting that comparison photo!

When I was down the revolver rabbithole a couple years ago I did look at online frame/holster size charts but my memory is fuzzy on all that stuff.

This is a good comparison of various S&W sizes I just found. My L frame holster is in between the K and N frames (as one would expect!)

RPF PREMIUM MEMBER
I looked on Youtube and I didn't see any videos about the Hopper costume, so I made this.

I've distilled as best I could the huge amount of information that all of you have shared on this thread.

I've addressed the "close enough" approach for certain items which are either difficult to find or expensive.

I should point out that I don't receive any money from my videos.


Let me know about things that I need to correct or update.

These videos have undergone a number of updates.

The current Part Two and Part Three videos were put up on 18 October 2020.

I wanted a reasonably screen-accurate Hopper revolver, non-ferrous resin or plastic prop that could pass through the metal detectors which have become standard at our local US southwest Cons.

The Rick Grimes Colt Python is identical to Hopper's Season 2 sidearm except for barrel length: 6 inch versus 4 inch.

The zombie killer airsoft is widely available and very inexpensive, I've seen it as low as $20.

I took the airsoft revolver entirely apart and removed every bit of metal: screws, pins, springs, internal metal barrel, spring mechanism etc. I was surprised how many metal parts had to be removed, dozens.

Then I chopped the barrel and top sight ramp and reassembled the pistol using plastic pins where necessary. I still need to find a substitute for the screws.

Another thing to do is to glue the trigger and hammer in place; some Cons ban anything (even water pistols or Nerf guns) that have a moveable trigger.

Here's the original to upper left and the final at upper right. 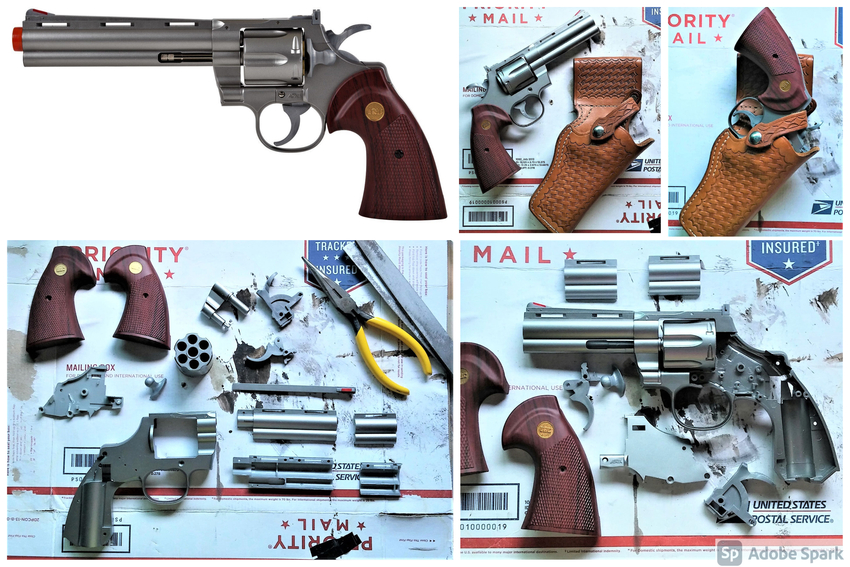 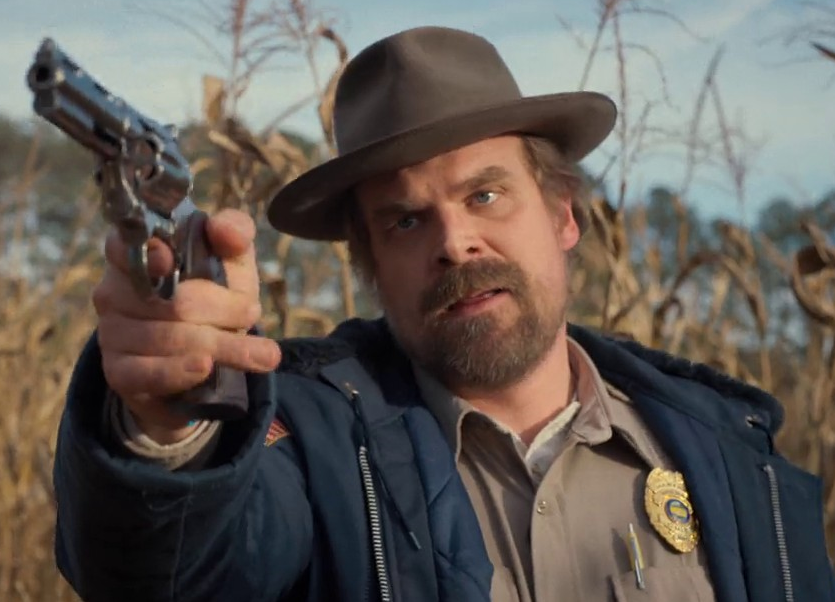 Here's my costume with the Season 2 revolver and Season 2 belt. 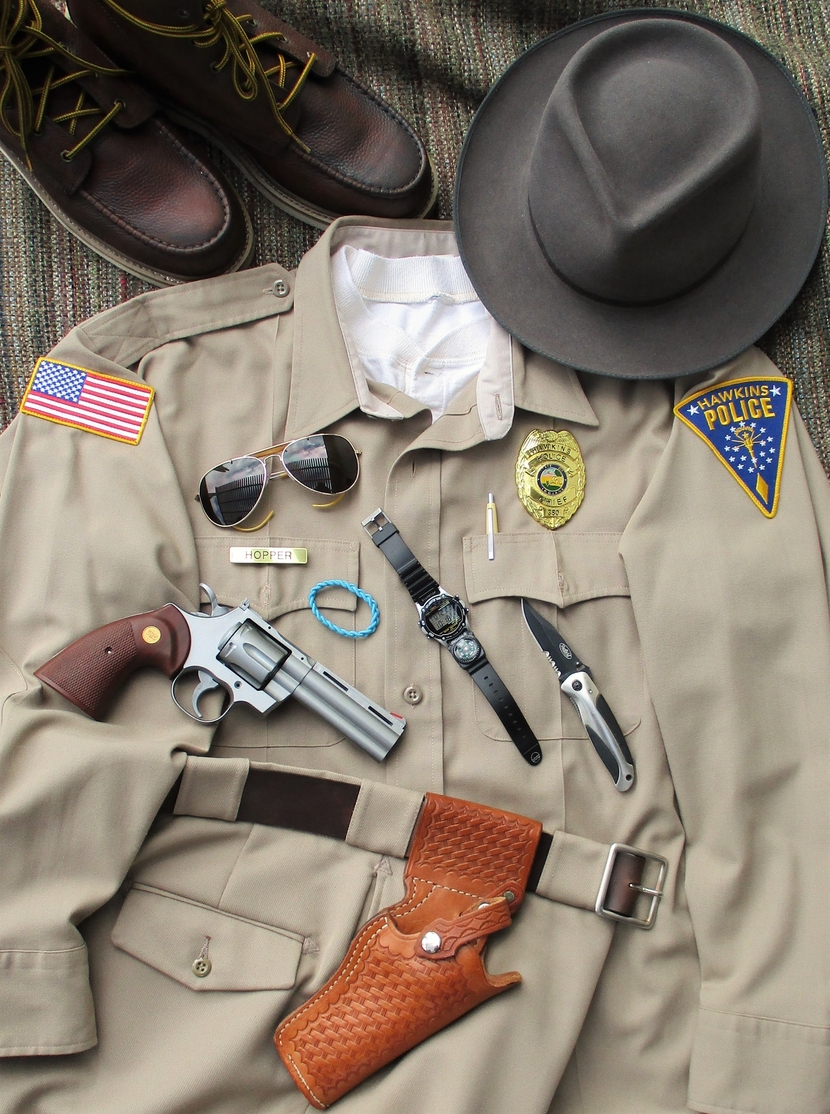 RPF PREMIUM MEMBER
I know interest has dropped on the Season 1 and 2 Hopper, but that's my only Hopper.

Just today, Halloween afternoon, I quickly put together Hopper's Season 2 belt, a longstanding "to do" for me.

The buckle came from Gould & Goodrich who make law enforcement belts, holsters, and other equipment.

Both belts are called "garrison belts" in ordinary parlance.

Both buckle styles come in highly polished nickel, while the "hero" buckles have a satin or "brushed nickel" finish. I took 300 grit sandpaper to turn the polished buckles satin.

Here are my belts, S1 above and S2 below. 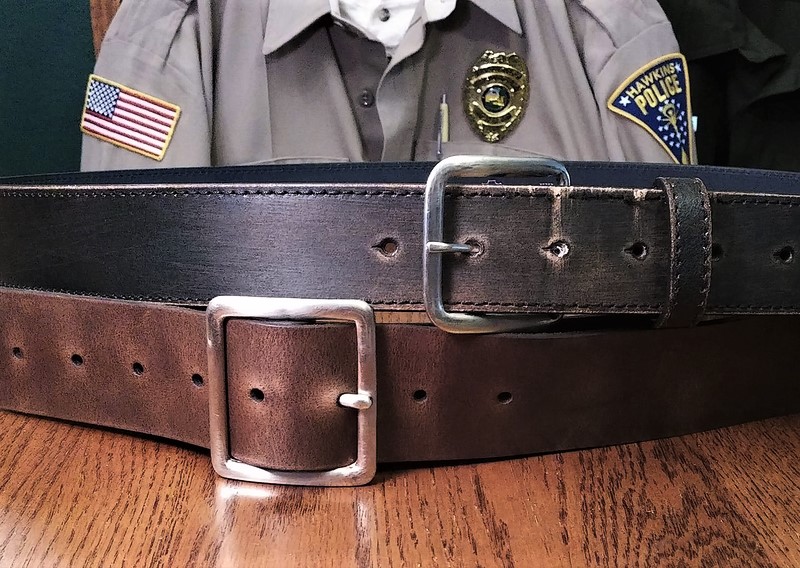 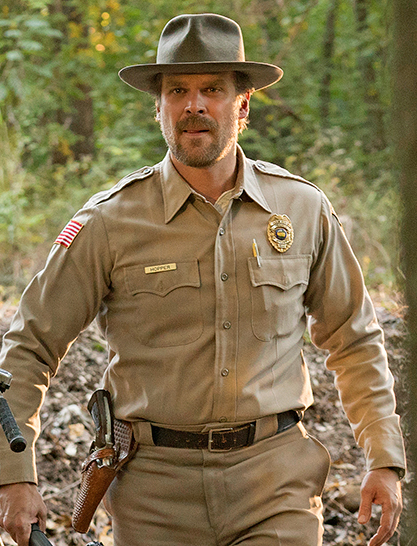 Hopper wearing the S2 belt. It looks darker than it is in this photo. 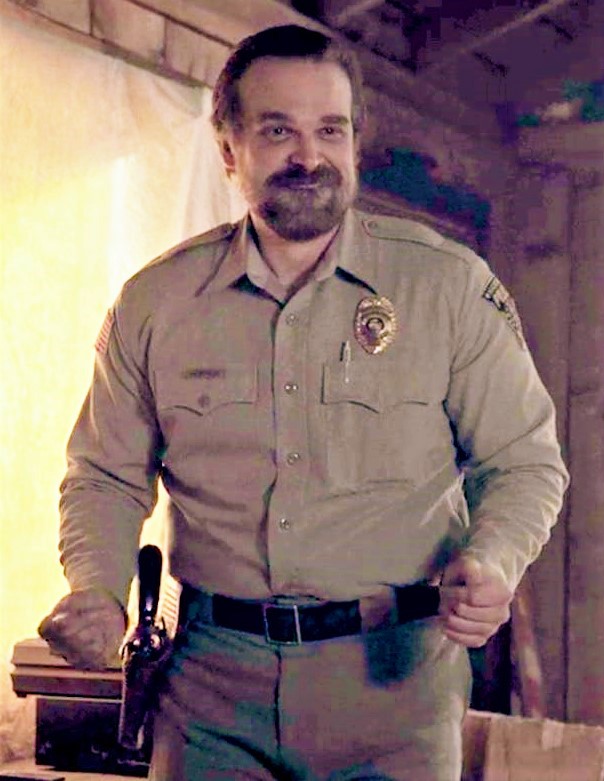 The S2 costume on display at the FIDM Stranger Things exhibit. 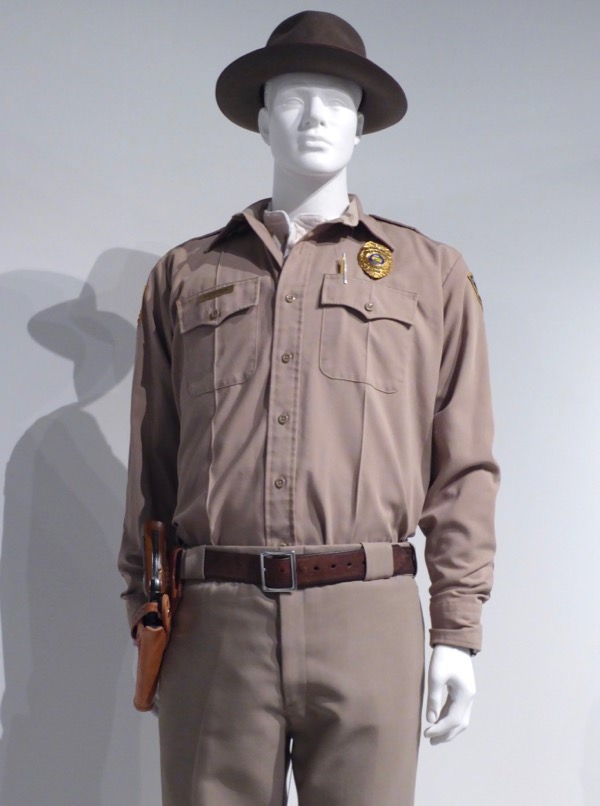 Closeup of the S2 belt. Interesting is the crude extra hole, as if Hopper had lost weight at some point and had to punch an extra tighter hole in a hurry.

Note that the detachable little tab on the holster is missing. 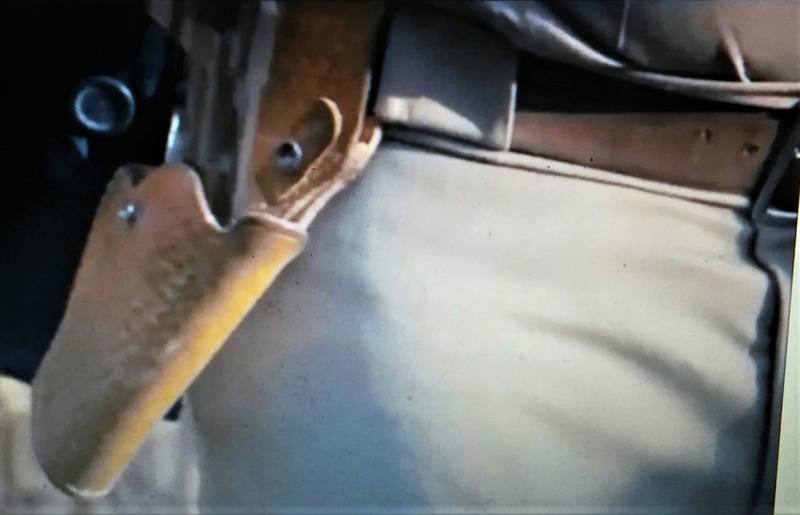 RPF PREMIUM MEMBER
Back to the matter of the Hawkins Police Department patch, I recently got one from "smileyproducts13" on Ebay (left).

Here it is compared to the one I've been wearing for a couple years, which I got on Etsy from "dreamworldbybrian" (right).

And below them two screen shots provided by Pinder for comparison. 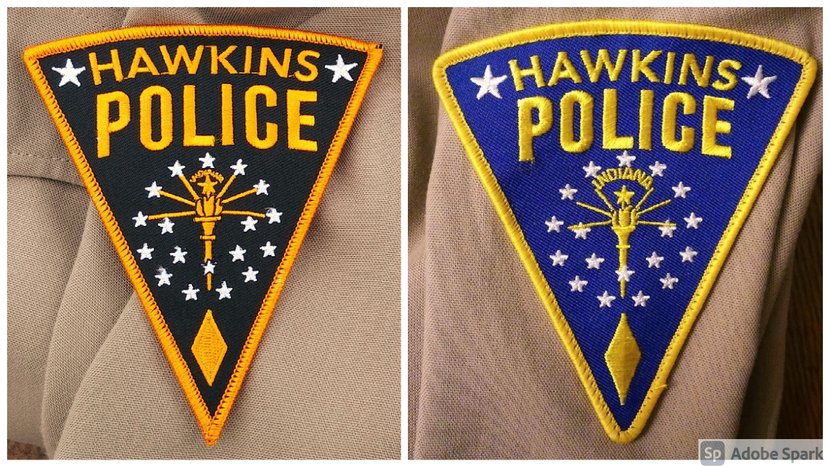 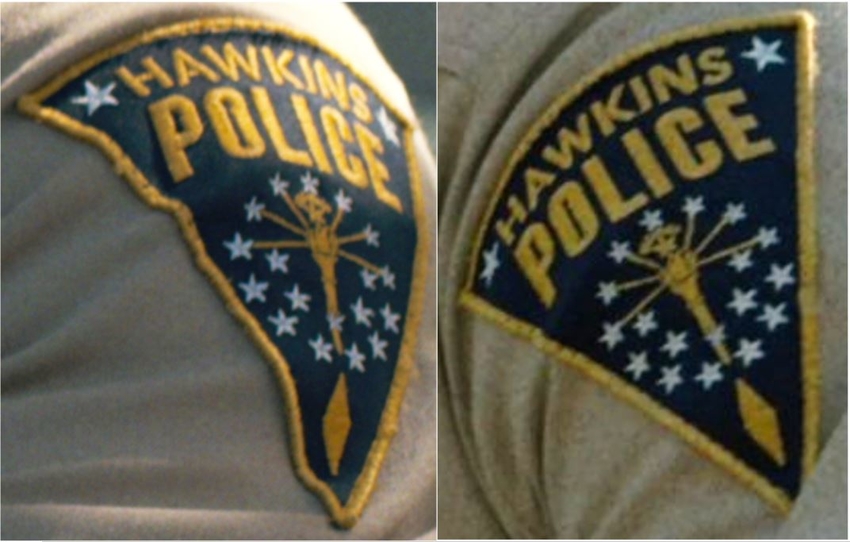 Seems to me the replica on the left is more accurate overall.

However it has three major problems:

2) the diamond at bottom is far too fat

3) the colours seem off. Yes I know US police "blue" uniforms are extremely dark to the point of appearing black in all but strong sunlight, yet I've taken this patch outdoors and it looks black. And the "gold" is somewhat too orange.

The other patch's colours are off in the opposite ways. A middle ground would be nice.
Last edited: Feb 9, 2021

View attachment 1427285
Could someone tell me what jacket he is wearing? I found the walls blizzard pruf and the big smith western jackets but don’t know for sure.

After a year of research and looking at still photos I figured out what boots Jim hopper wore in season 1 and season 2. They look like red wings 877 or 10877. But the color never matched, there is some extra stitching on the inside of the boot, and the upper leather texture was different than red wings. They are Woolrich Speculator boots. I order a pair and I will let you guys know how the fit of them are if anyone is interested.
Last edited: Sep 28, 2021

trentonc93 said:
View attachment 1427285
Could someone tell me what jacket he is wearing? I found the walls blizzard pruf and the big smith western jackets but don’t know for sure.
Click to expand...

There was a thread a while back about the jacket, here it is Stranger Things: Chief Jim Hopper's winter jacket?