Fantastic Joe.....simply breath taking! I can't wait to get started on this kit!
P

Hiya - first off this is absolutely amazing - BR2049 is one of my most favorite films and I'm super glad to see this project still in the making!

So after this build is complete, what would the run look like here? Would this just be a kit? If it is, would it be finished (aka no painting of parts?)...would there be a completely assembled & finished version as well? What kind of pricing would we be looking at? Thanks!

pcenginefx said:
Hiya - first off this is absolutely amazing - BR2049 is one of my most favorite films and I'm super glad to see this project still in the making!

So after this build is complete, what would the run look like here? Would this just be a kit? If it is, would it be finished (aka no painting of parts?)...would there be a completely assembled & finished version as well? What kind of pricing would we be looking at? Thanks!
Click to expand...

Thanks for the kind words adn welcome to the RPF! The general rule around here is that we keep talk of runs and such in the junkyard, where there is a thread for this: 2049 Portable Voight Kampff

That's just so we don't clutter up build threads with info that will get outdated and such.

In other news:
I have a build update incoming. The programmer is just about done with all the code! Stay tuned...!

Ok, after a couple weekends of tweaking and going back and forth with the programmer, the animations and sound are done.

Lots of small changes in the animations- especially the 'scan sweep' on the right, but one addition is that it now does a proper 'analysis' of the eye-white before relaying all the info about Sapper Morton.

The programmer could only get some rudimentary sound in there- it was dangerously close to killing system performance in terms of frame rate, and unfortunately, the piezo speaker has such a limited frequency range that a proper 'camera flash whine' simply can't be done, and if it had been made even longer, you would be able to hear each frequency shift in s step-like fashion. The sound was also made intentionally low-volume so as not to be irritating. (I might even lower it more with some tape over the speaker when I start putting it together. And it can be left out altogether for a silent unit.) The sound was the least important part of it after all, so at least there is something!


I just got a programmed set of components from the programmer, so I'm going to start soldering and building over the Christmas break. More photos and info on my progress as and when I have it!

Even with the inaccuracies, the audio still captures that gross, almost insectile quality that the technology of the film had. I think it sounds great.

AnubisGuard said:
Even with the inaccuracies, the audio still captures that gross, almost insectile quality that the technology of the film had. I think it sounds great.
Click to expand...

Thanks, I'll relay that to the programmer! : )

(He's actually not a fan of Blade Runner (either of the two) at all, but he does like the Alien franchise so I suggested he listen to the computer sounds in Alien and Aliens for some inspiration, and to make it sound old-school Commodore 64-ish!)

RPF PREMIUM MEMBER
It's been quiet for a while. Hope y'all have started the new year on a good note.

I finally managed to find some time to solder the electronics together.

After going back and forth on what type of LEd to use for the small red one in the center of the popup arm, I decided to go for screen accuracy and use a 2mm surface-mount: 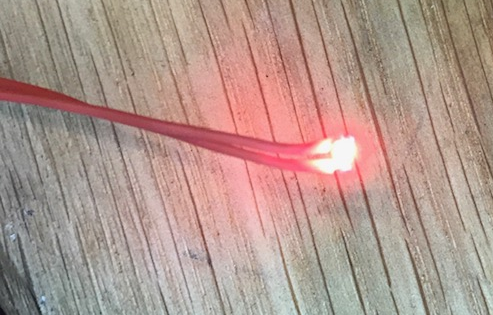 They are rather small, but after looking at a tutorial on youtube where they used double-sided tape to hold it in place while soldering, it turned out to be a lot easier that I first thought it would be.

Closeup of the main RGB LED. I sanded down the capsule. The screen used prop seems to use some kind of surface-mounted LED, but I've checked hundreds of available components and can't find anything close enough. (My guess is they used a special-made LED from some piece of scrapped Sony equipment. )

I added a couple of small 'guide wings' to the LED bezel to hold it in place. They're not screen accurate, but they won't really be noticeable once it's all put together, and precision is important in positioning the LED. 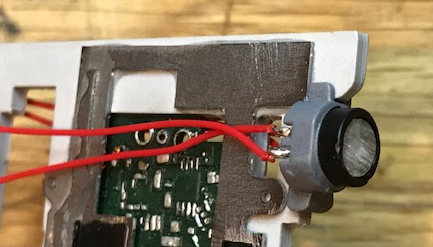 (Note: the parts in this assembly are not polished... they're to test functionality only. Once I get the final laser-cut alum parts, I'll make 'em look nice!) 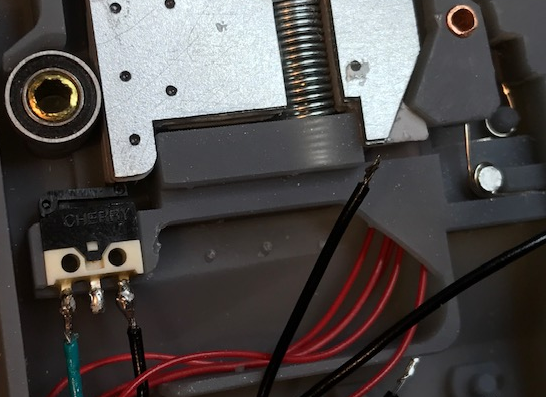 Video of the final electronics:

Everything works and it's under battery power. I used a piece of perforated brass as a ground plate (the mass of black wires) but in hindsight, maybe that was overkill. Next steps are gluing down all the cables where they are soldered to prevent them from snapping off when I squeeze them all into the chassis. (Repeated handling of thin wires runs the risk of them breaking at the soldering point. Some epoxy around the joint will hold them pl place so that only the insulated parts move around. It also protects against accidental shorts if a stray strand of wire should come loose!)

I was careful to measure out lengths of wires, so that the insides wouldn't have longer wiring than is needed. (Even thin wires take up a LOT of space.)

After this, I managed to cram everything into the case... video of that coming SOON. But I've decided to make the unit a little thicker, maybe 1mm or so, to give the internals some more breathing room. It's just a necessary reality of using a real working screen and circuit boards instead of a piece of plexiglass with green tape! It's not going to really matter once it's all put together though.

RPF PREMIUM MEMBER
Aaaand just when I said "done" to myself, I decided to do more tweaking. (I've basically used up all of my current supply of resin on this now... the machine is running on fumes!)

This is still a test, and may not be in my final build, but I'm almost certain it'll work.

LiPo batteries don't last forever. One of the downsides of products like the Wand Company Trek Phaser, communicator and anything else rechargeable these days is that they will some day stop working due to battery death. And they need to be charged periodically to extend battery life. The eye scanner will be a 'sealed' unit once assembled. There's no practical way to be able to open up the whole thing with the functional screen in place. (Well, it could be glued with a soft epoxy that could be pried open... but that might not be practical in the long run.) I wanted to see if it's possible to maybe access the battery at least, once it's put together.

So, I went back and started making some changes to the shell, resulting it this: 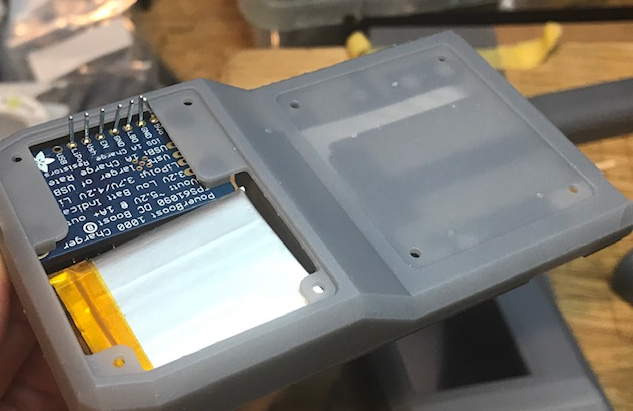 Looks like it'll work. (ignore the pins on the power booster... they are from the breadboard mount.) This meant that the screws on the bottom now have to be functional. And today I just picked up the specially ordered screws. 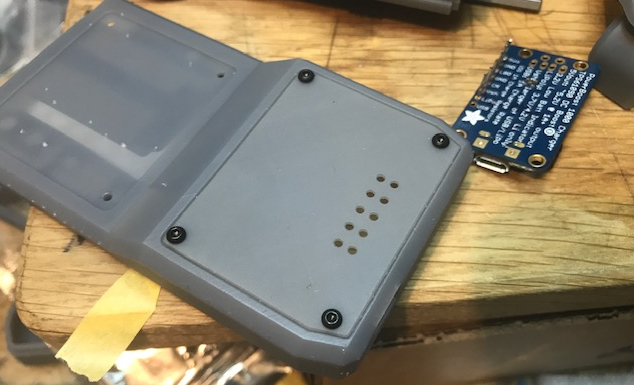 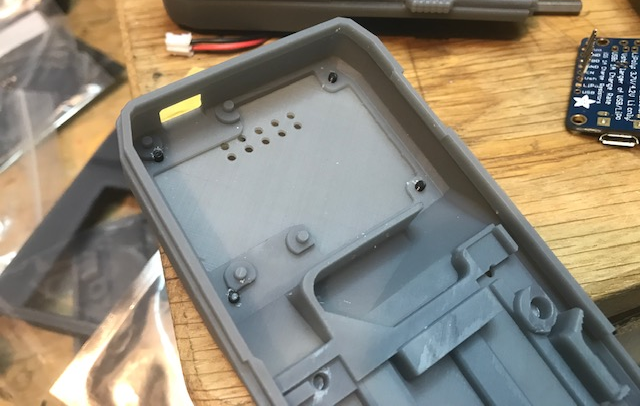 I also went and tweaked the charge port opening, to make it as small as possible. (The bottom half needs to be open so that I can get at the hidden on/off switch with a toothpick.) 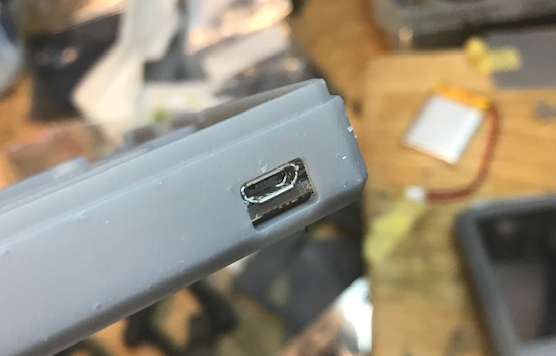 I still have to do a full assembly with this new shell, but after that, I'm really hoping to be able to say "done", at least as far as the engineering of parts goes.

Fabulous! I hate rechargeable batteries for that exact reason, my Wand Phaser and Screwdriver are both bricks now and I barely ever got to enjoy them. It's a great idea.