I haven't been here in quite a while but I wanted to share this as it may help some folks figure out how to add moving wings to their costumes. This is a single servo mechanism I originally created for an Asuna Sword costume but it could easily be used for other purposes (think Wasp, etc.) The goal here was to have the wings raise up and also fold back at the same time- while keeping the mechanism very small and light. With the original character the wings appear to almost "float" on her back around a central component. It took a long time to wrap my brain around this! Obviously if you only needed to raise the wings and not have them fold it becomes much, much simpler. If anyone has any questions just ask- I'm always happy to help figure out this crazy stuff!

It's pretty neat that you can four wings move like this using a single servo running on 4.8V (it'll move much faster on 7.2V) The wings are polycarbonate and the wingspan is approximately 62" (the mechanism base plate measures just 7" wide.)

I have no intention of manufacturing these as it's an enormous amount of work to make (only this one is available so PM me please.) I'll be writing up a full tutorial soon but for now have a look at this test video-

Awesome sight and finding
How did you plan on making them fold though?

George said:
Awesome sight and finding
How did you plan on making them fold though?
Click to expand...

They do fold backward as they raise up. Here's a pic that shows how far back they move- it's hard to see in the video due to the camera angle. Are you thinking of something else like having an outer wing section that folds independent of the inner wing (like on large feathers wings? ) You could definitely do that using a small linear servo. 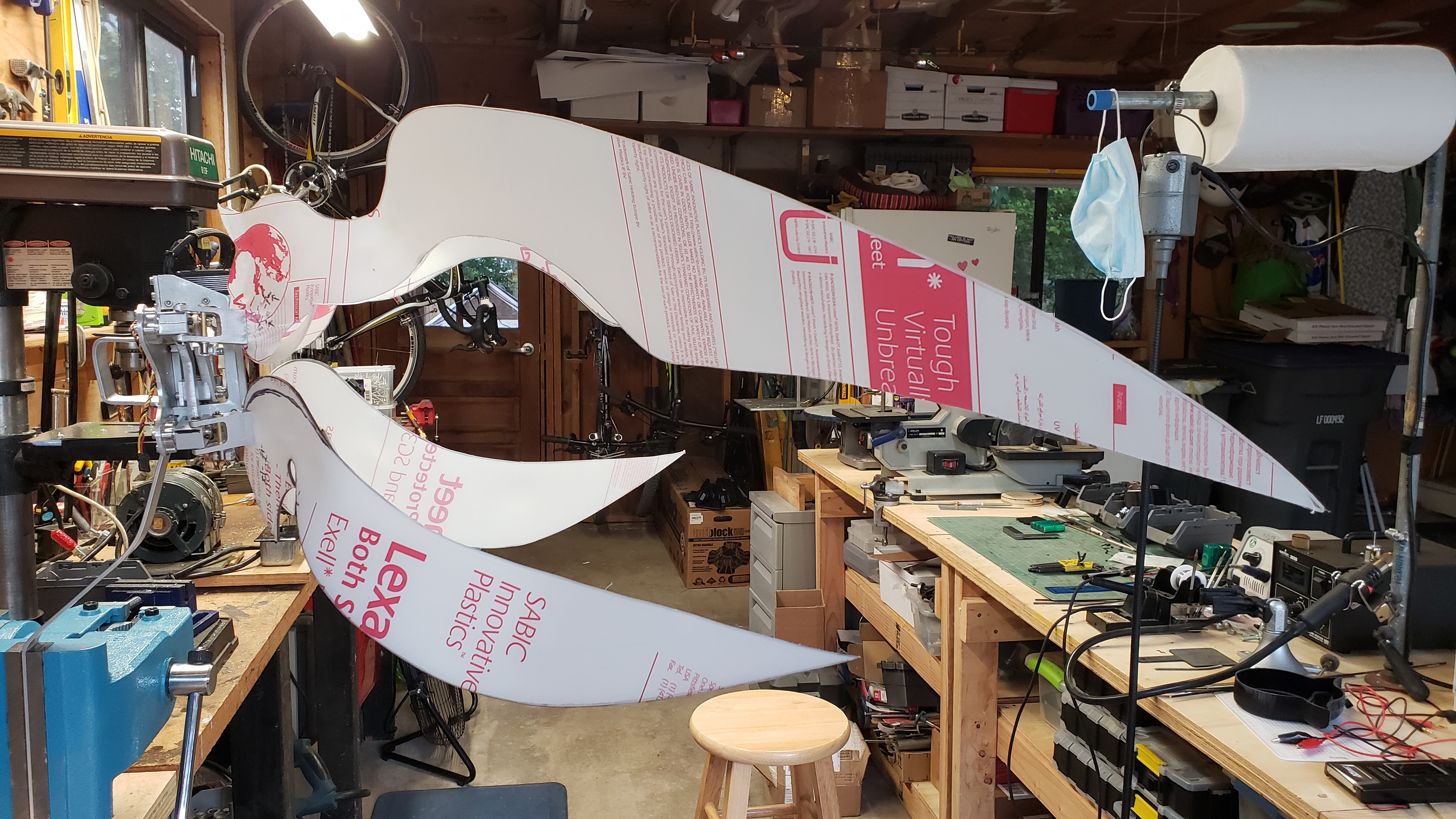 Here's a pic of the mechanism- 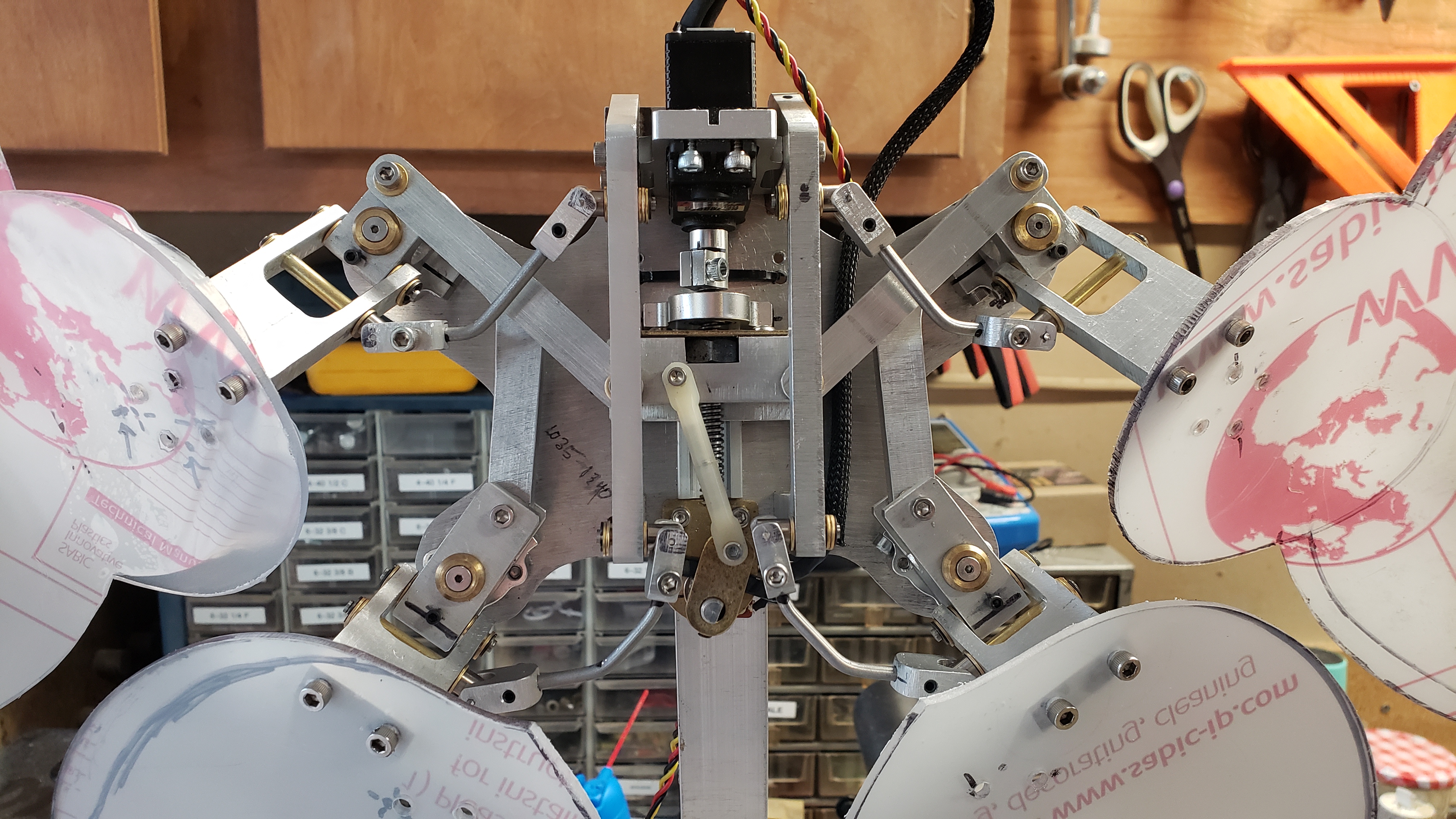 Holy cow that looks amazing! And way more complex than I could ever think of, but then again this isn't my expertise.
I would definitely consider using something like this in the future, but I would want to do it right.I'm stumped though on how to fold the wings mechanically as opposed to with gravity... how about a nylon cord attached to the end that rolls up like the one on a fishing rod with reel, and in doing so retracts the tip or the wing? Because it's nylon it would be translucent to the public.
Last edited: Jul 5, 2020

With wings it's all about leverage ratios. You have to remember that a wing is just a big long lever and how hard it is to move depends greatly on how much leverage you can exert on it. If you try to raise a wing at its base it will very quickly burn out a servo unless the wing is extremely light weight. It's like trying to pick up a broom by the very end of its handle. Often a servo has the torque to lift the wing but then it can't hold position or it can't move the wing in a controlled manner.

Linear servos are different in that they use a lead screw to convert rotary motion into linear motion. A lead screw is essentially a wedge that moves a drive nut or output shaft. A lead screw type linear actuator will hold position even when power is turned off.

If you try to use a cable it can work if you have a lot of leverage on the spool to get it to rotate and draw the cable and you have a very secure method for fastening the cable at the opposite end. Cables also stretch, even braided stainless steel cables so you also have to have a method of adjusting the cable tension. In my mind cables tend to be a last resort when no other mechanical means can work.

Here's a close up video of the mechanism working.