RPF PREMIUM MEMBER
Hello gang!
Recently picked up on of JoeZ's Rebel Transport kits and fell in love with it. My goal was just to have a fun and simple bird to park next to my JPG Medical Frigate, but once the transport arrived, I now have a 1/350 fleet obsession. 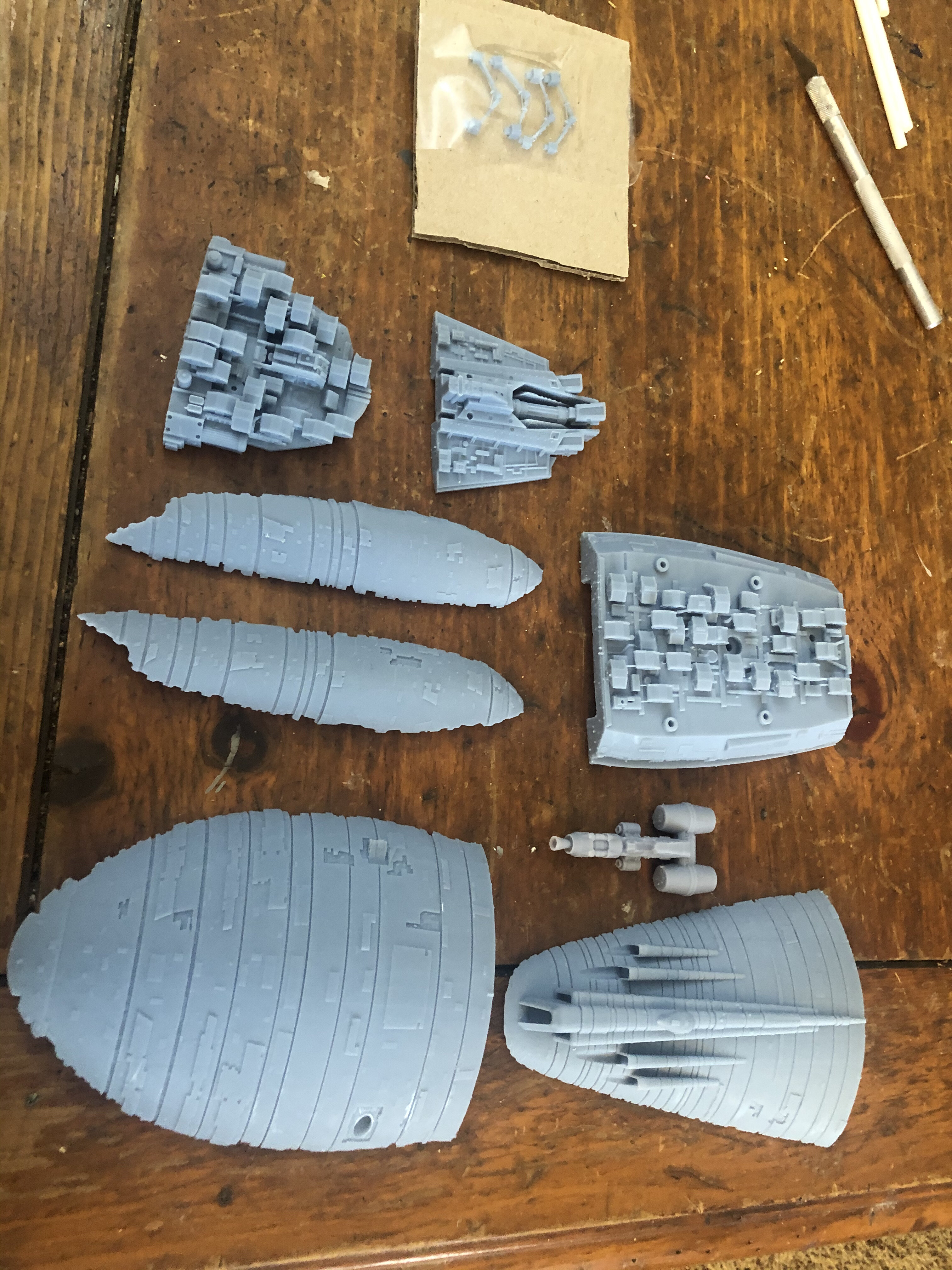 The kit is simple. and beautifully printed. 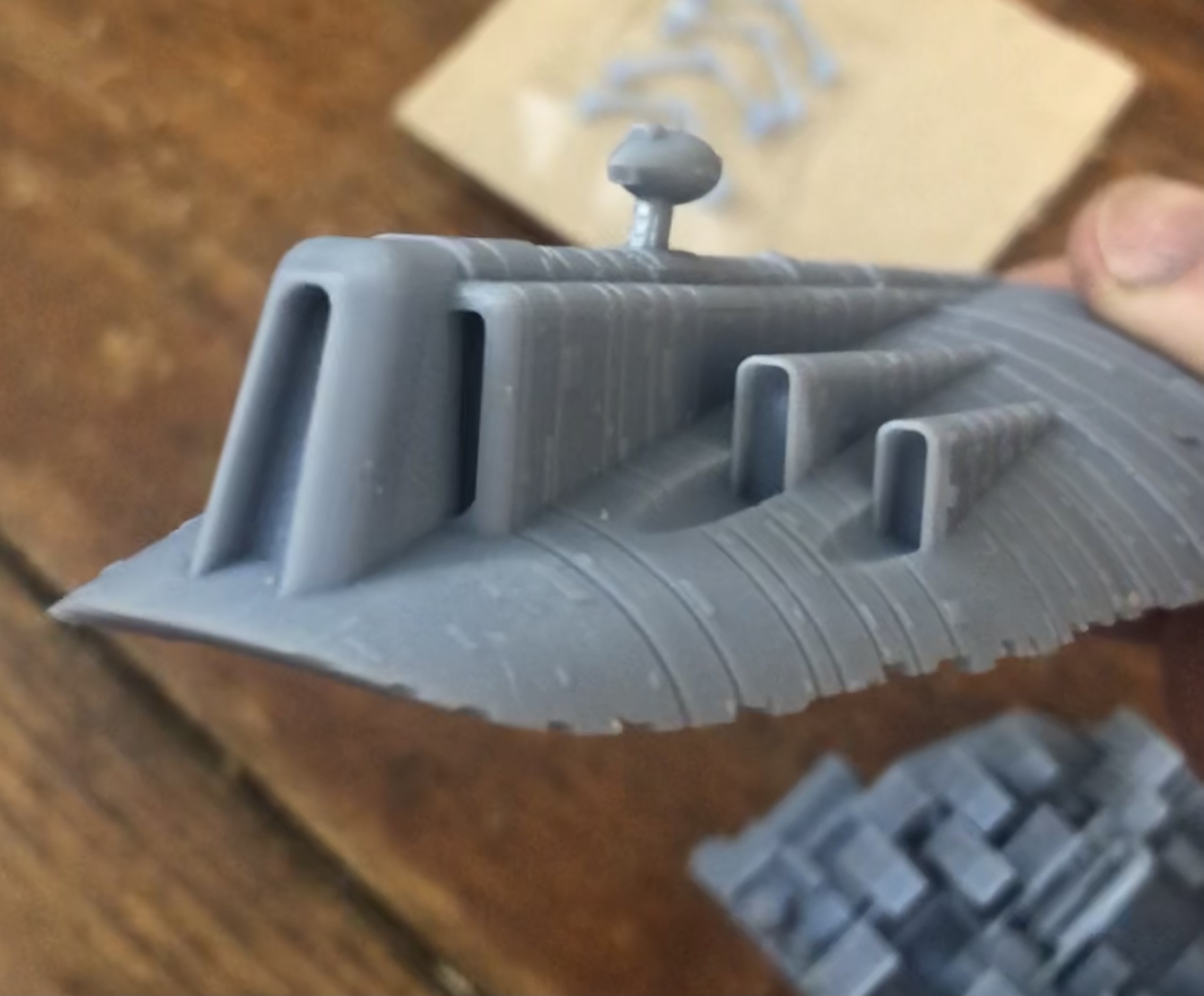 Sharp detailing, especially on the shield dome above. 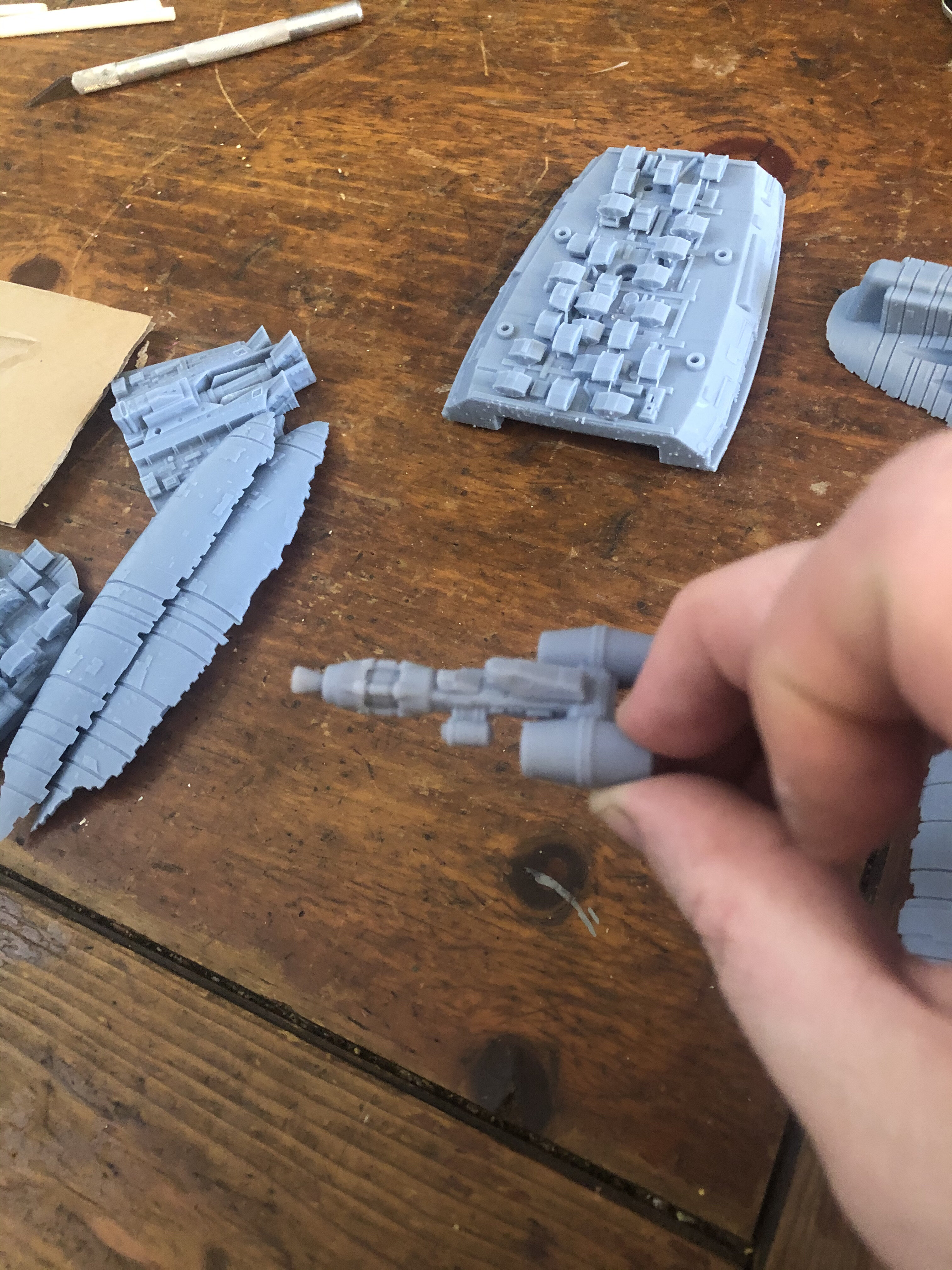 This made me snicker with glee! Little portable gas station lol (this was a background kit bash ship) 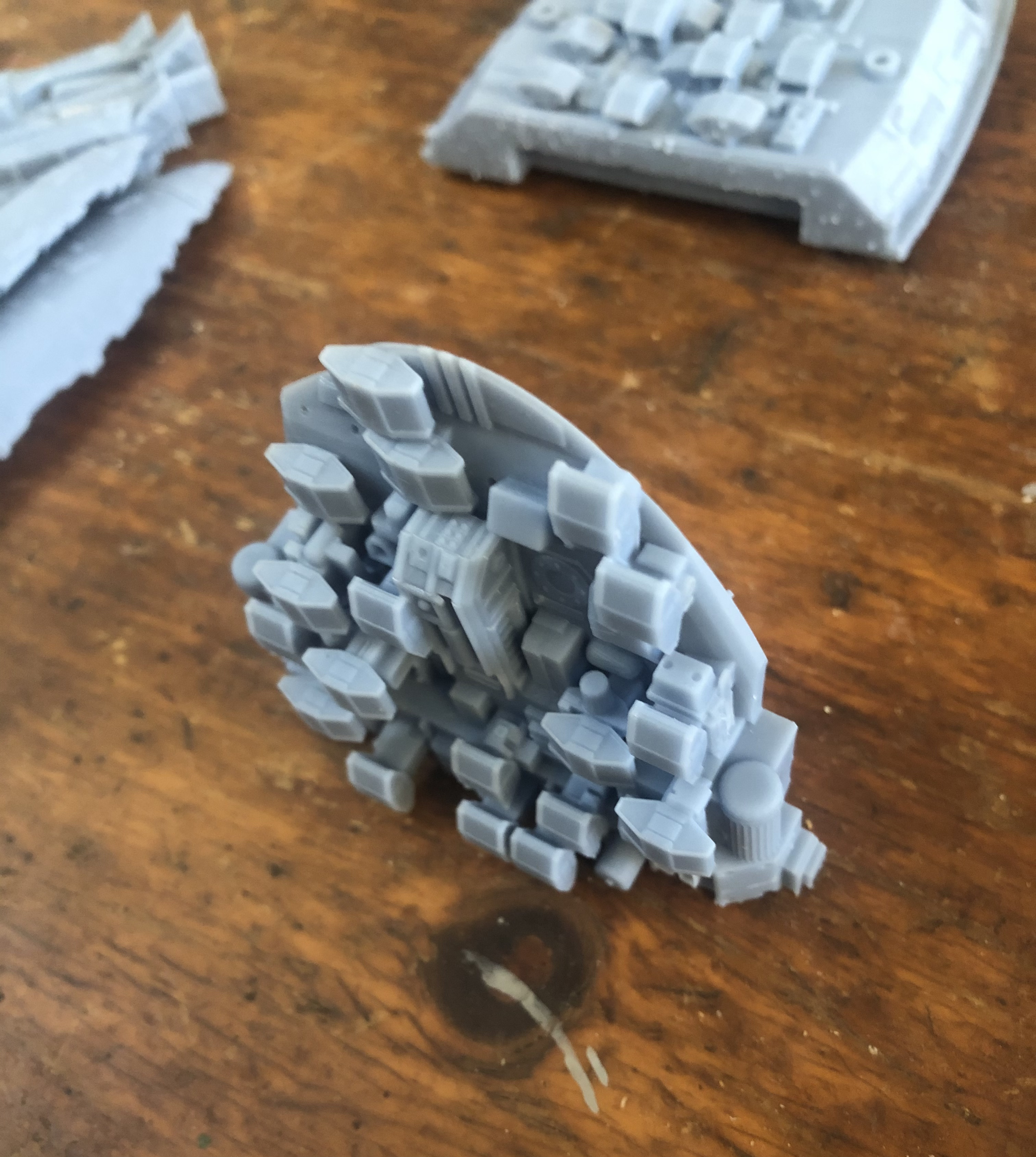 Holding this and seeing it up close became on of the final nails in the coffin to invest in a resin printer. Just stunned by the lack of flash, anchor points, etc. Beautiful piece. 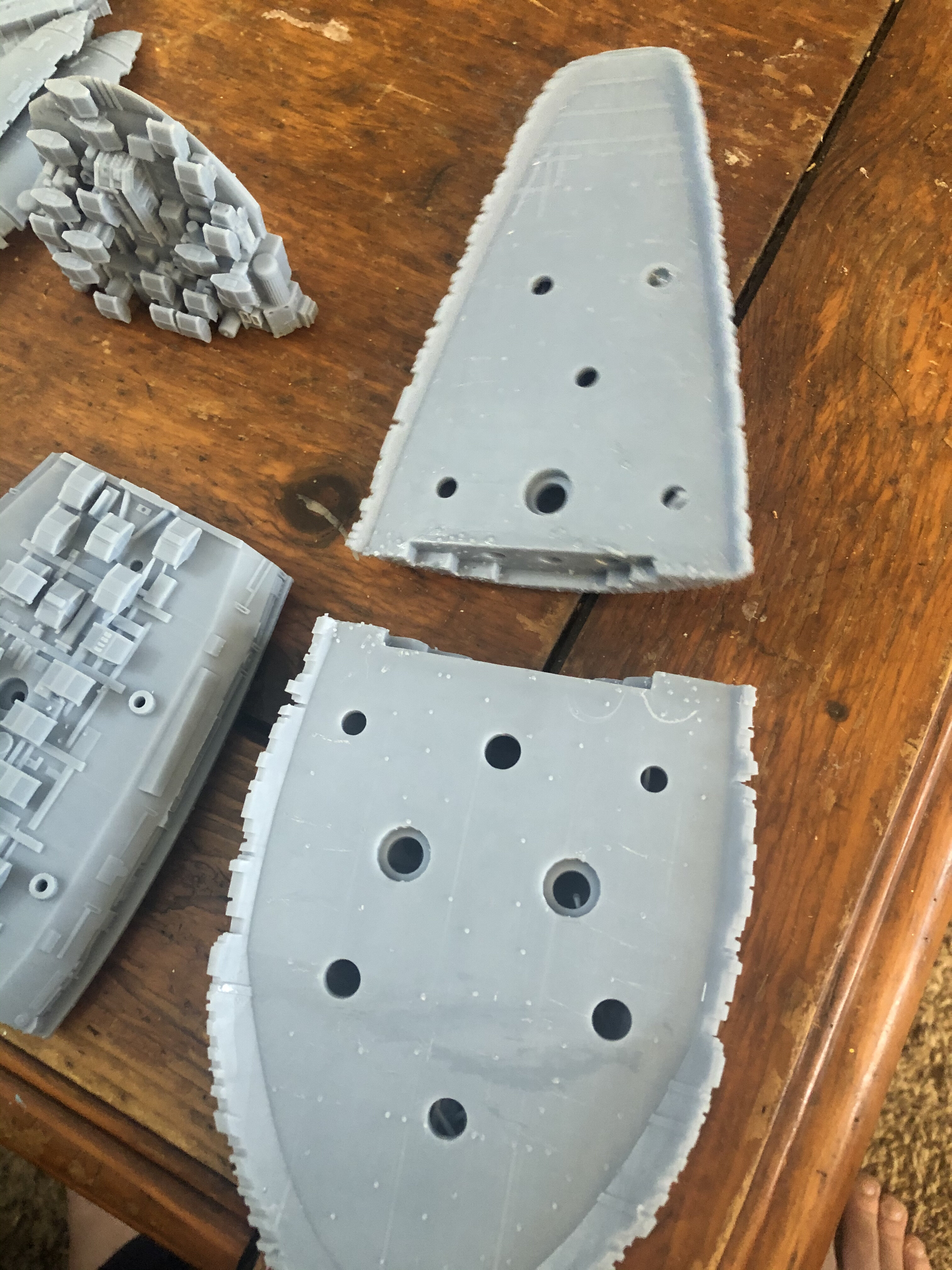 Was excited to learn the hull was hollow, having limited experience with printed kits, I now know this is common. Will make lighting way easier. 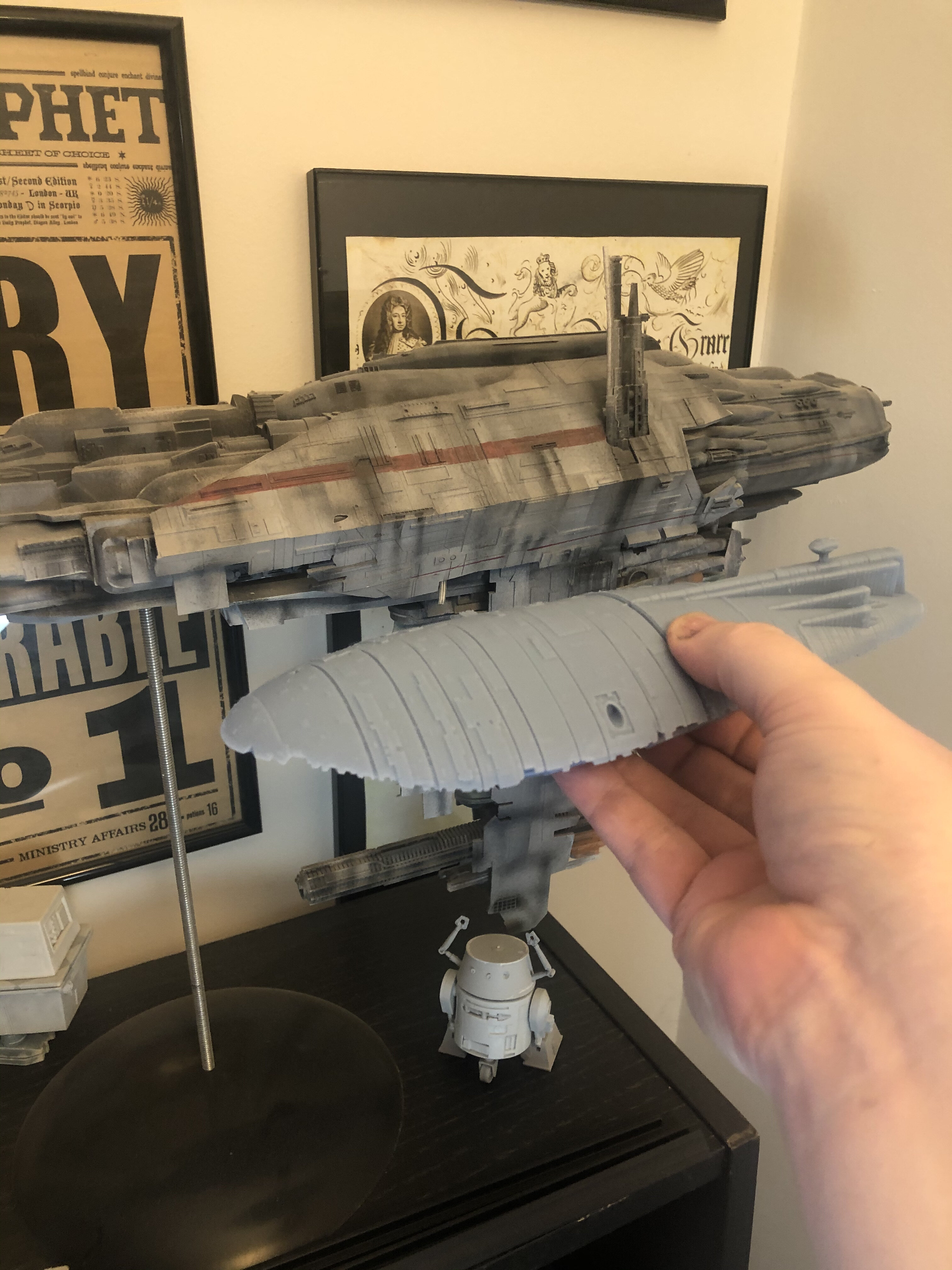 Next to the big Medical Frigate kit (and Chopper lol) It matches nicely with on screen references.

RPF PREMIUM MEMBER
Lighting the little guy was simple and straight forward.
But I must impress upon you, go SLOW with your drill. you could melt or shatter pieces, so take your sweet time and keep your drill bit cool.

I started by carving out the rear of the hull to not only run upper engine light, but to run the three large engine bells below.

This hole will be covered by the rear engine section. 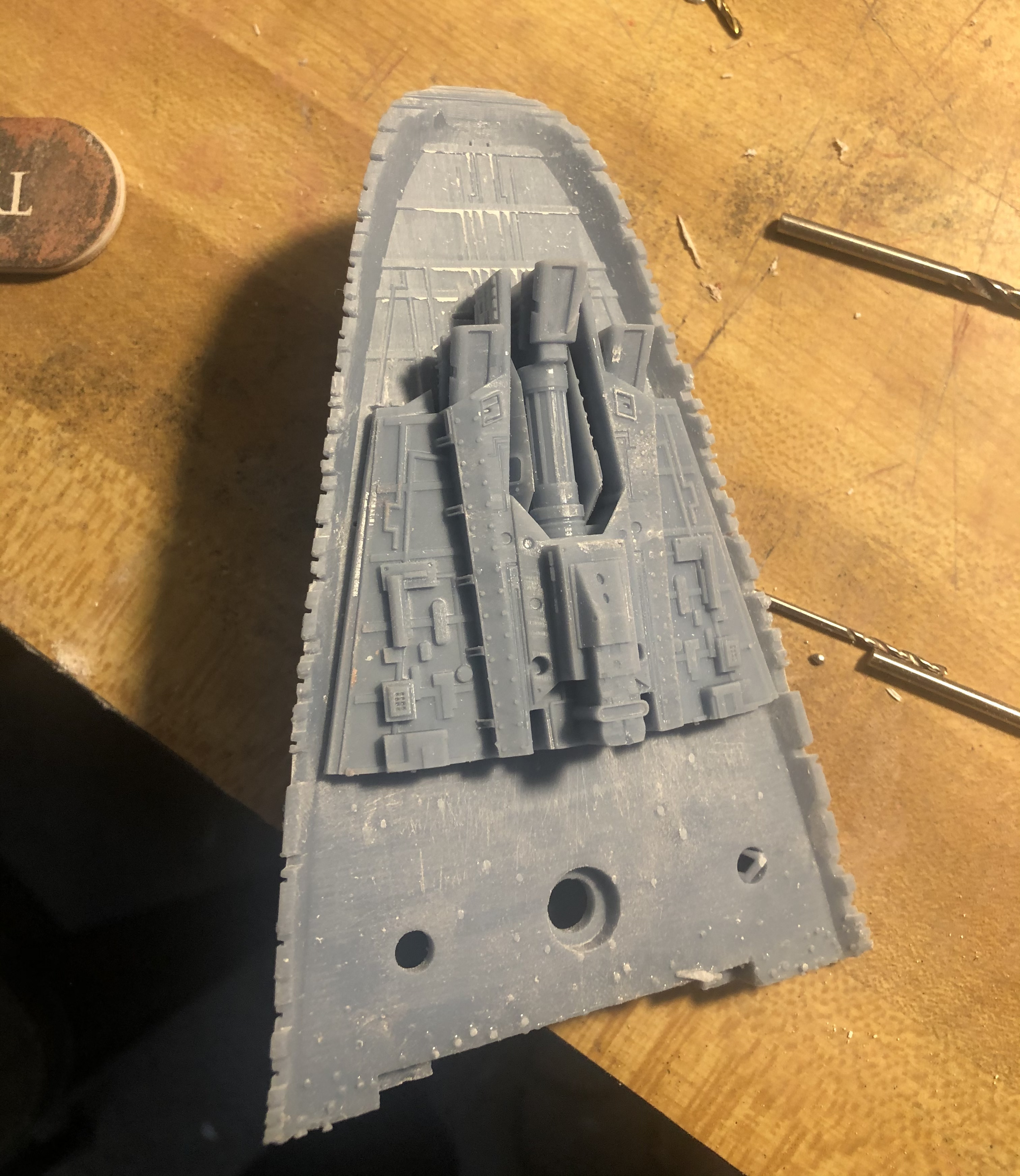 then I sliced out a section to run the wires out to the base, battery, and switch (will run on a 2032 coin battery). 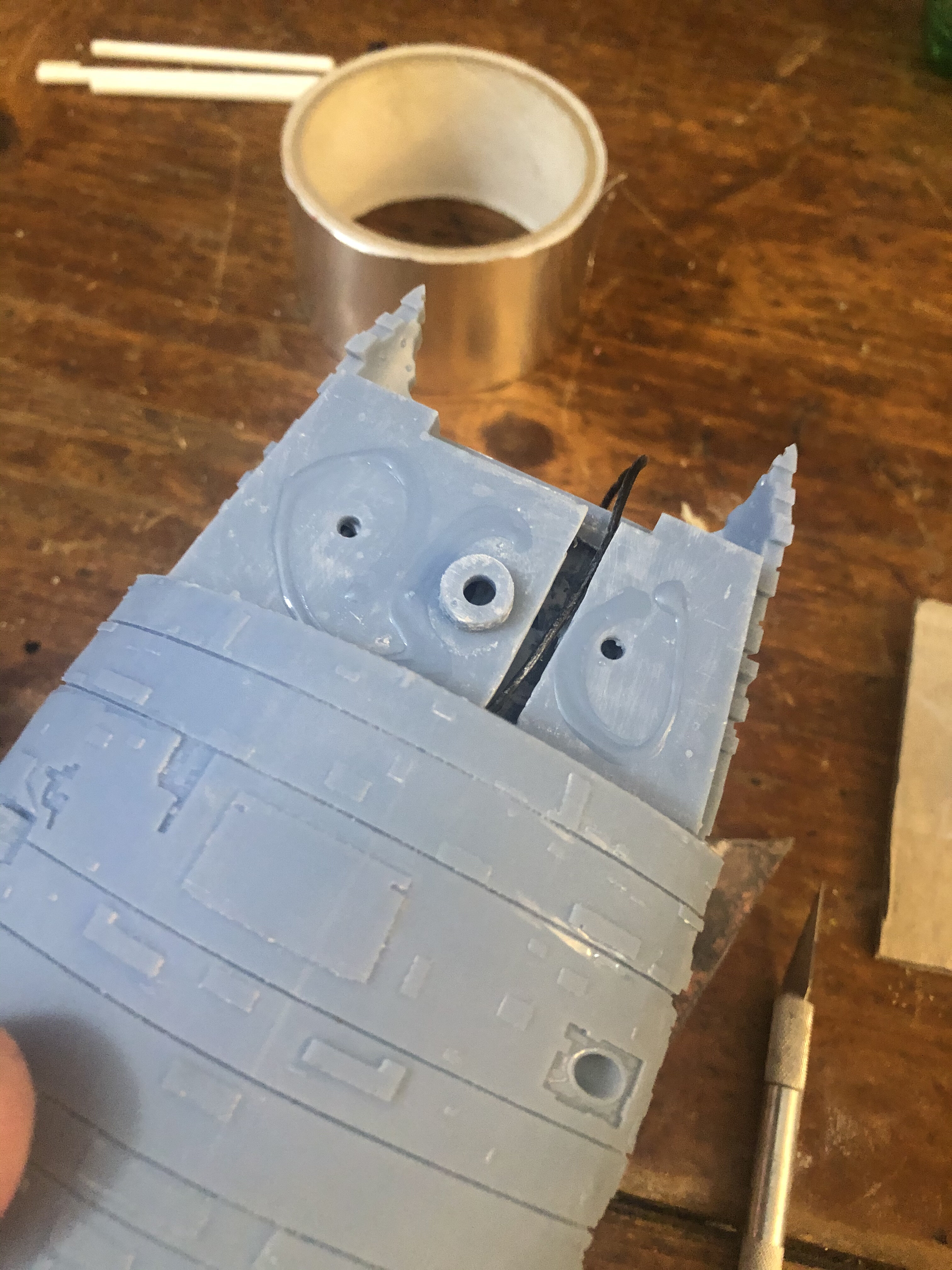 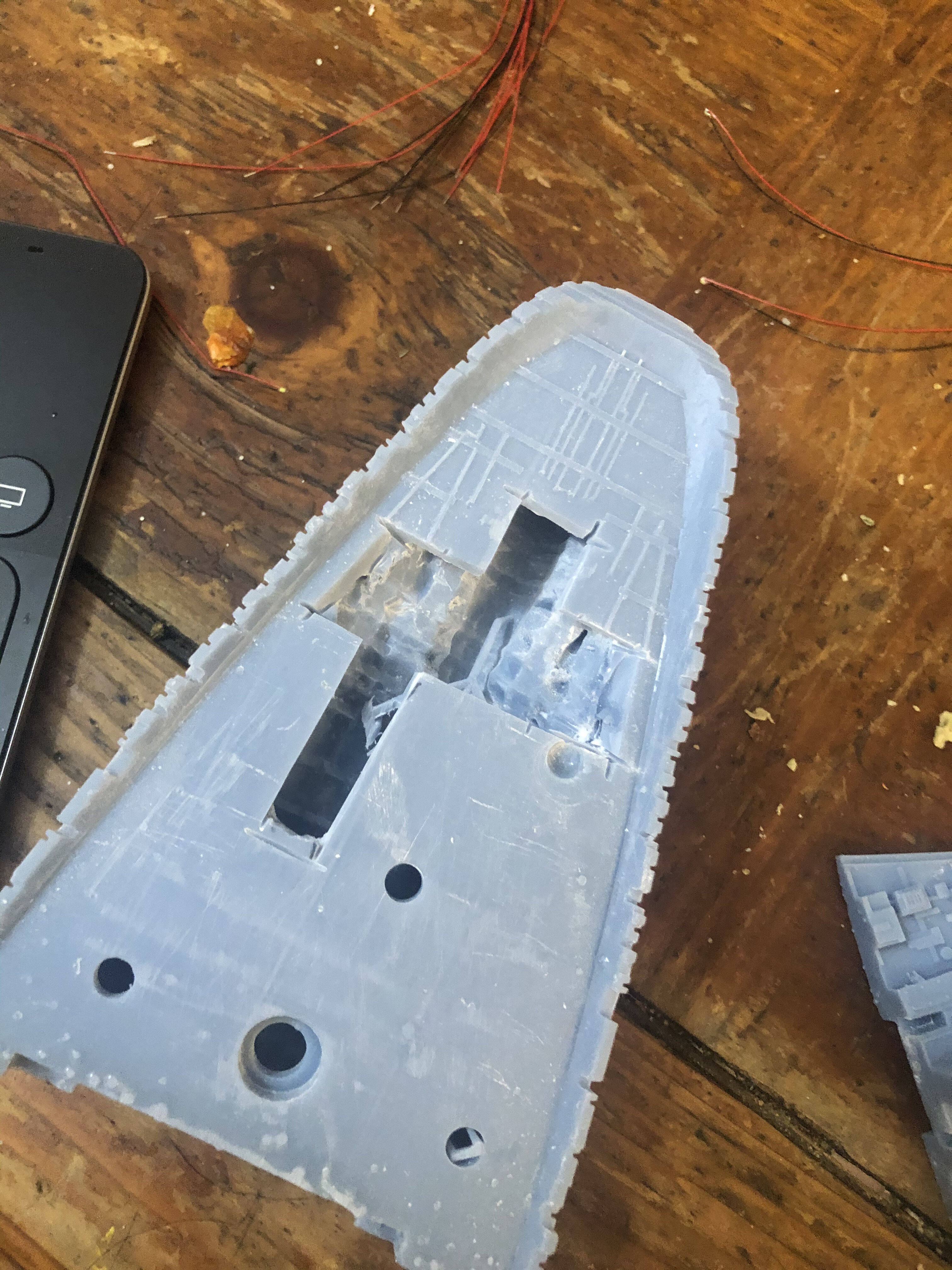 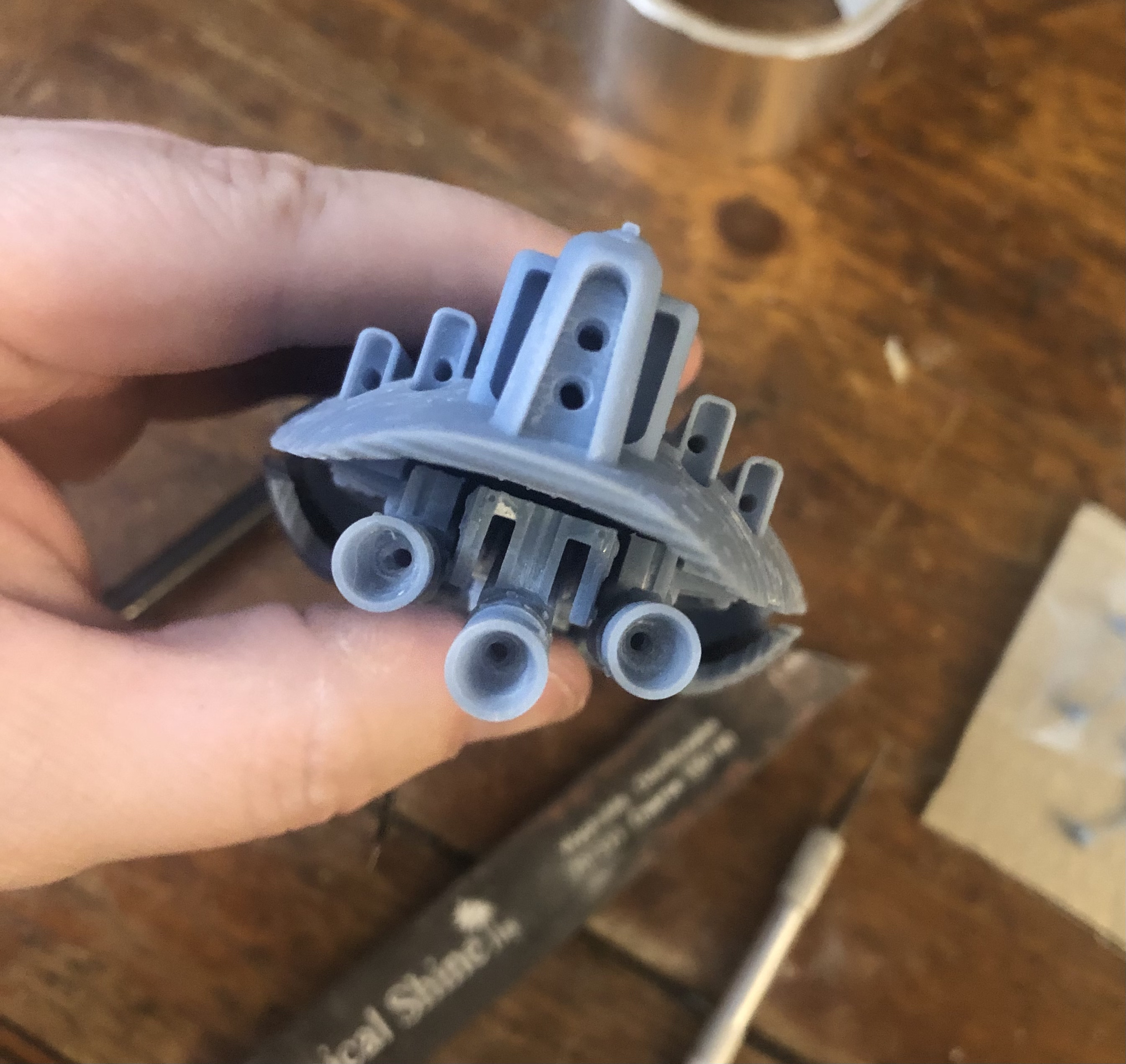 RPF PREMIUM MEMBER
Our lights are just going to be cool white micro LEDs, and each will be placed snuggly with a drop of hot glue to disperse light. 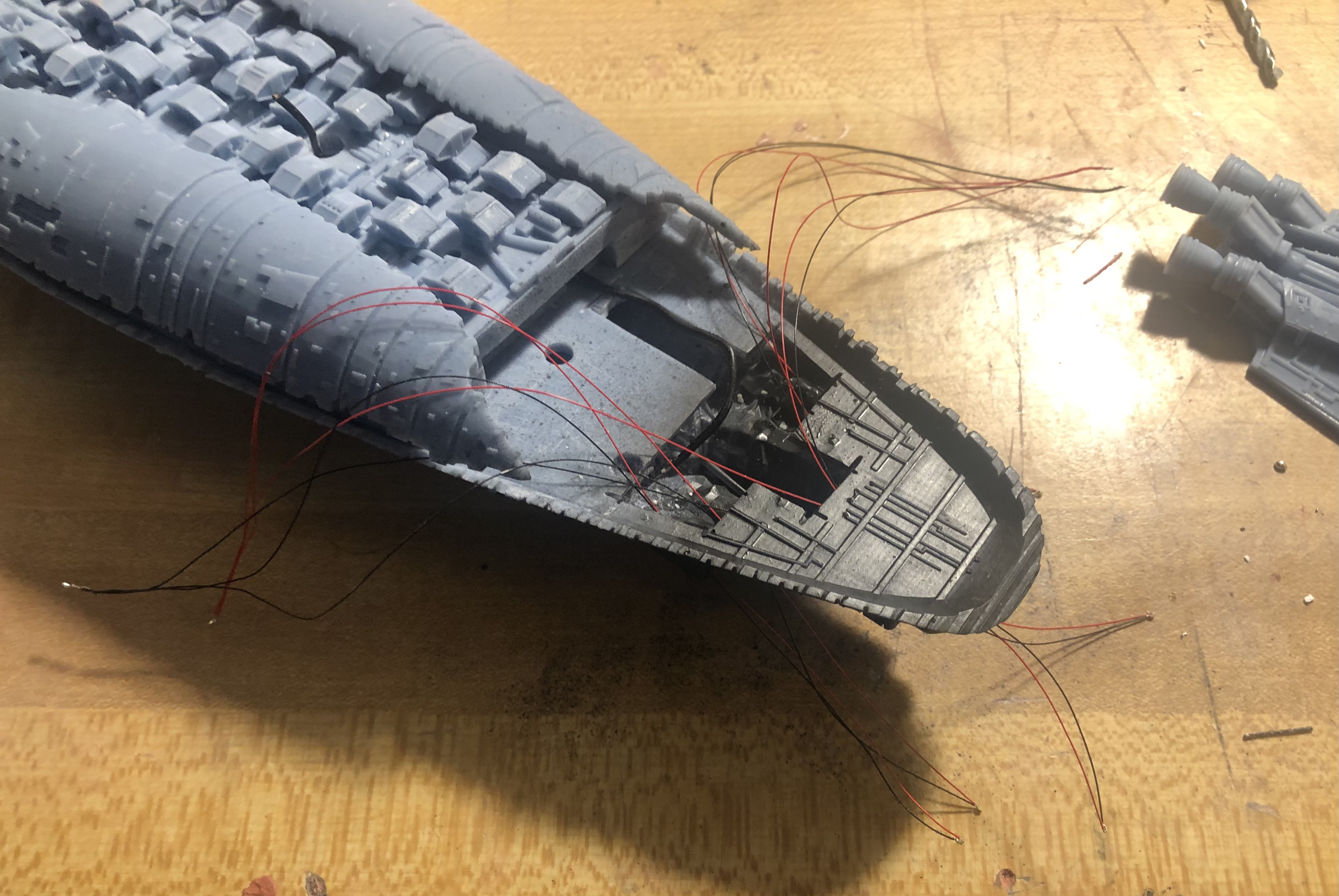 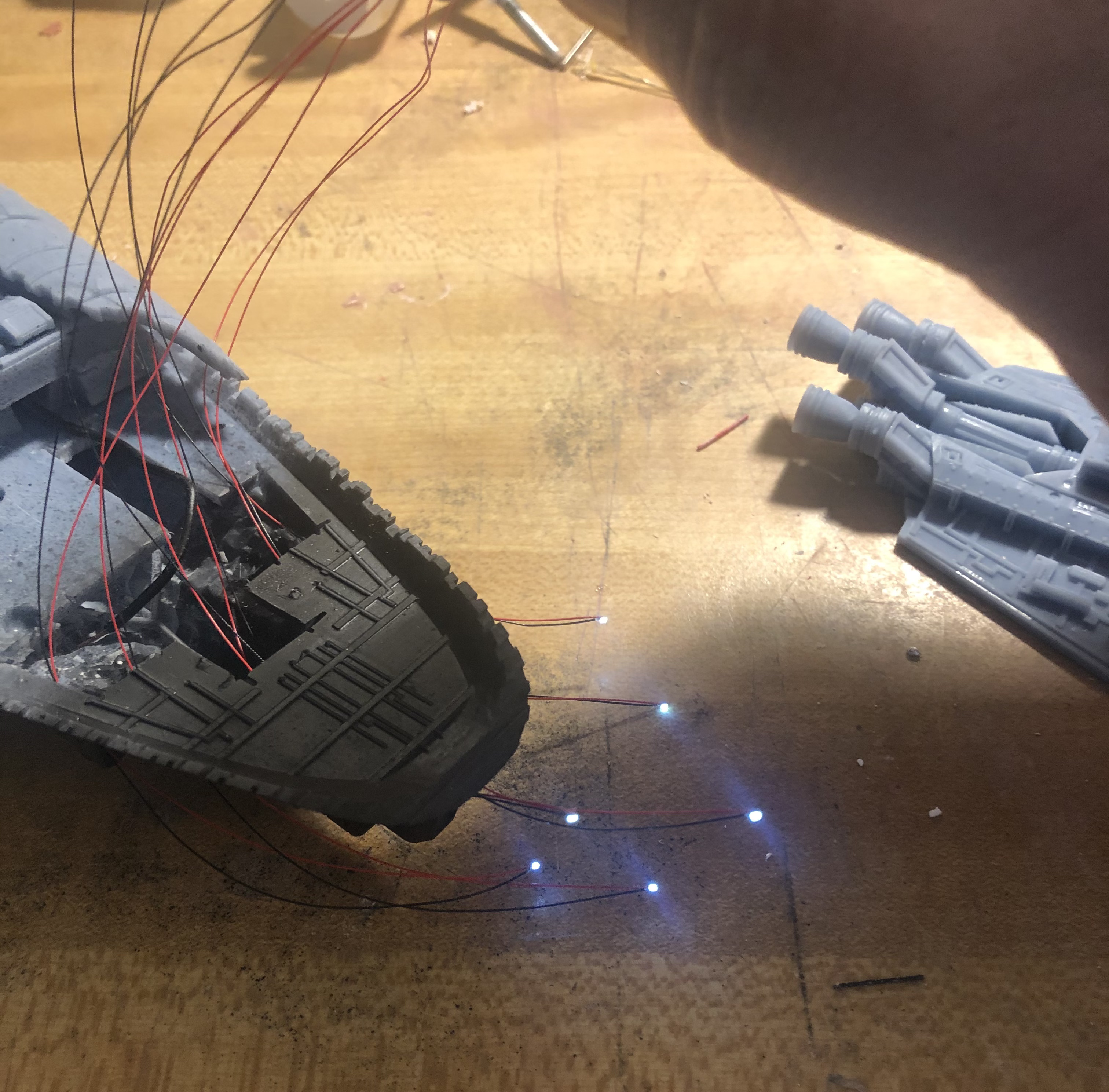 I very slowly pulled each wire into place, then secured. 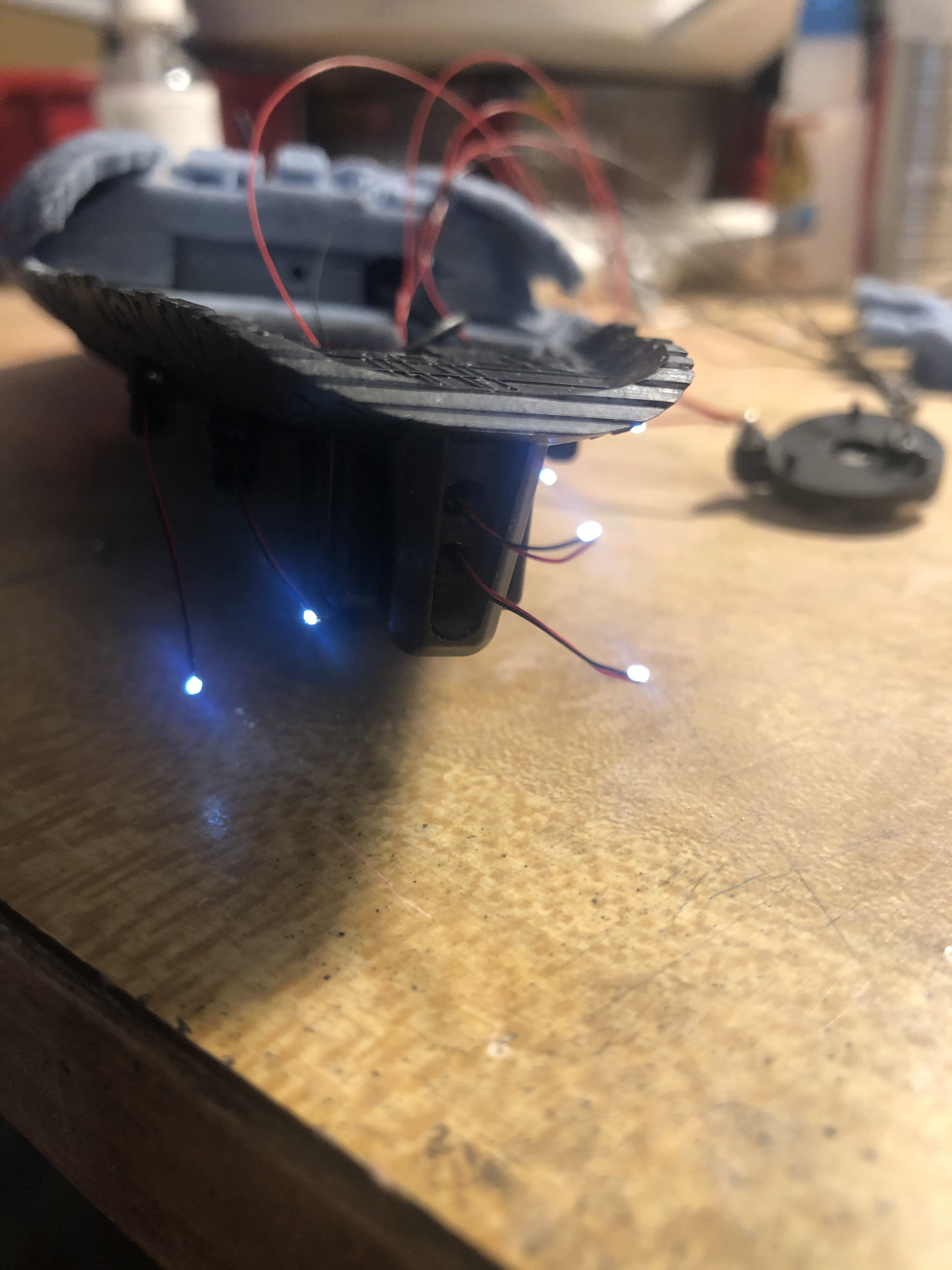 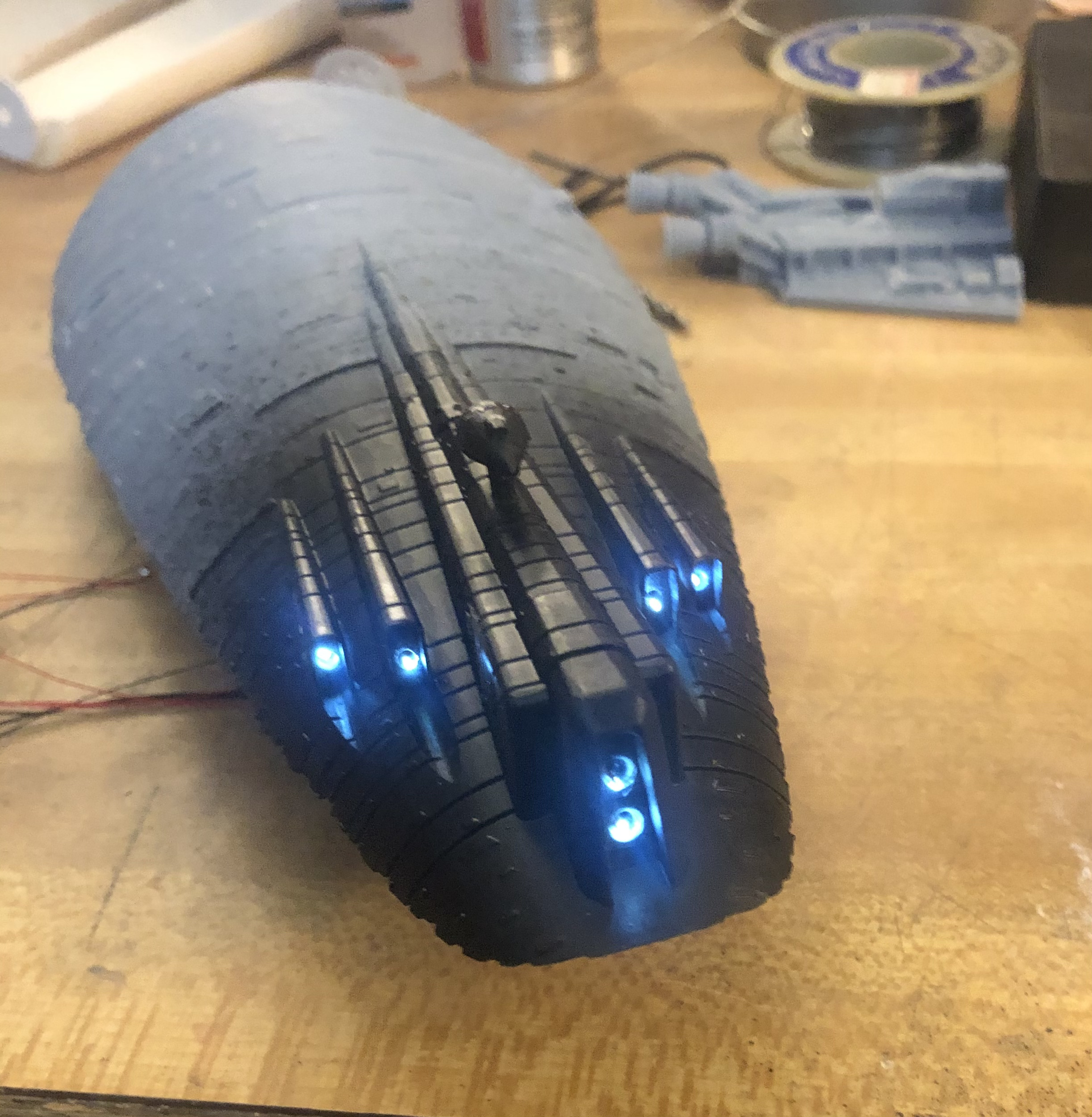 I then discovered my references were incorrect and the middle section does NOT have two engine lights. I finally dug into my pysical library and found everything I needed. Interent failed me for once.

Time to light up the engine bells and seal her up. 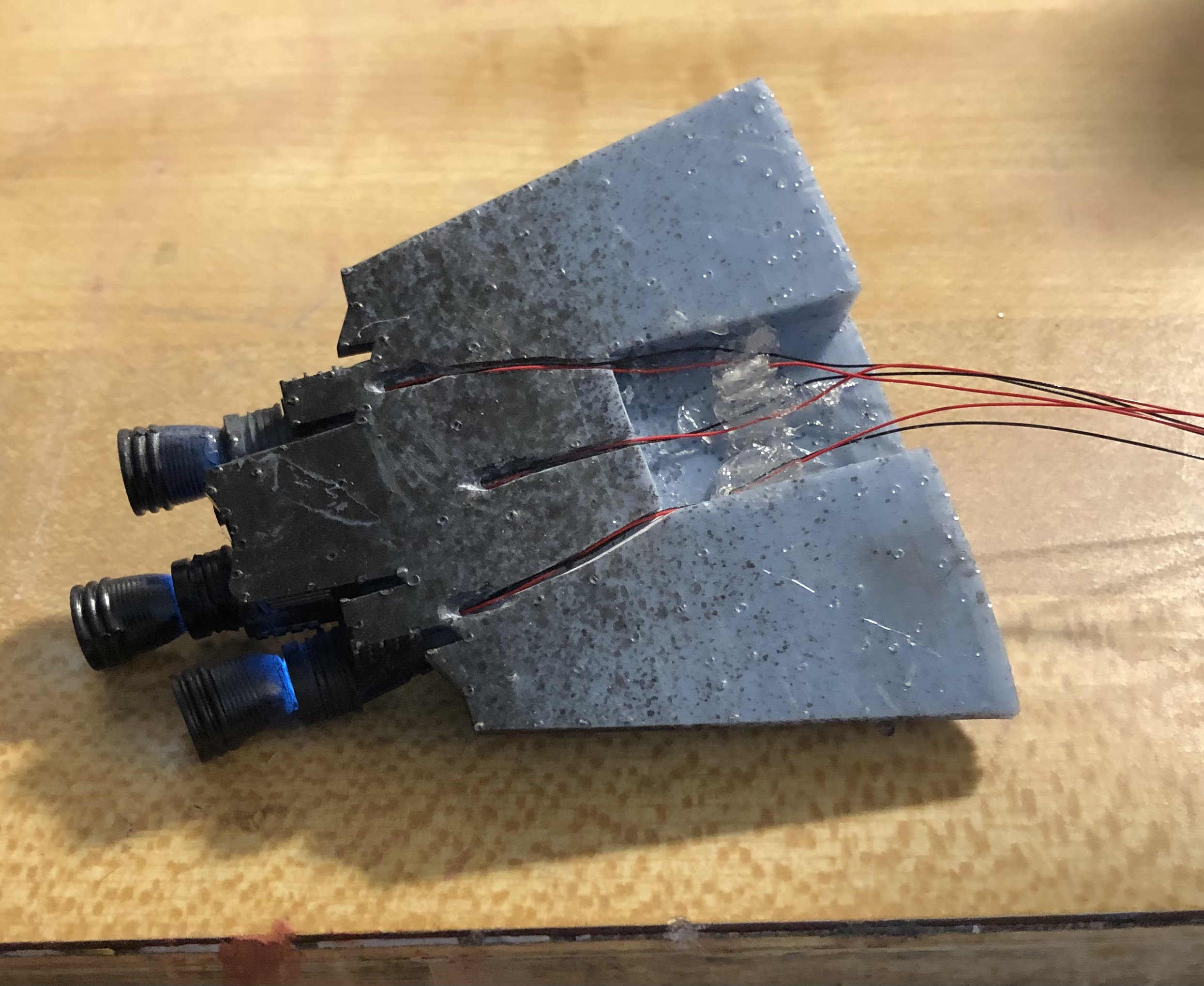 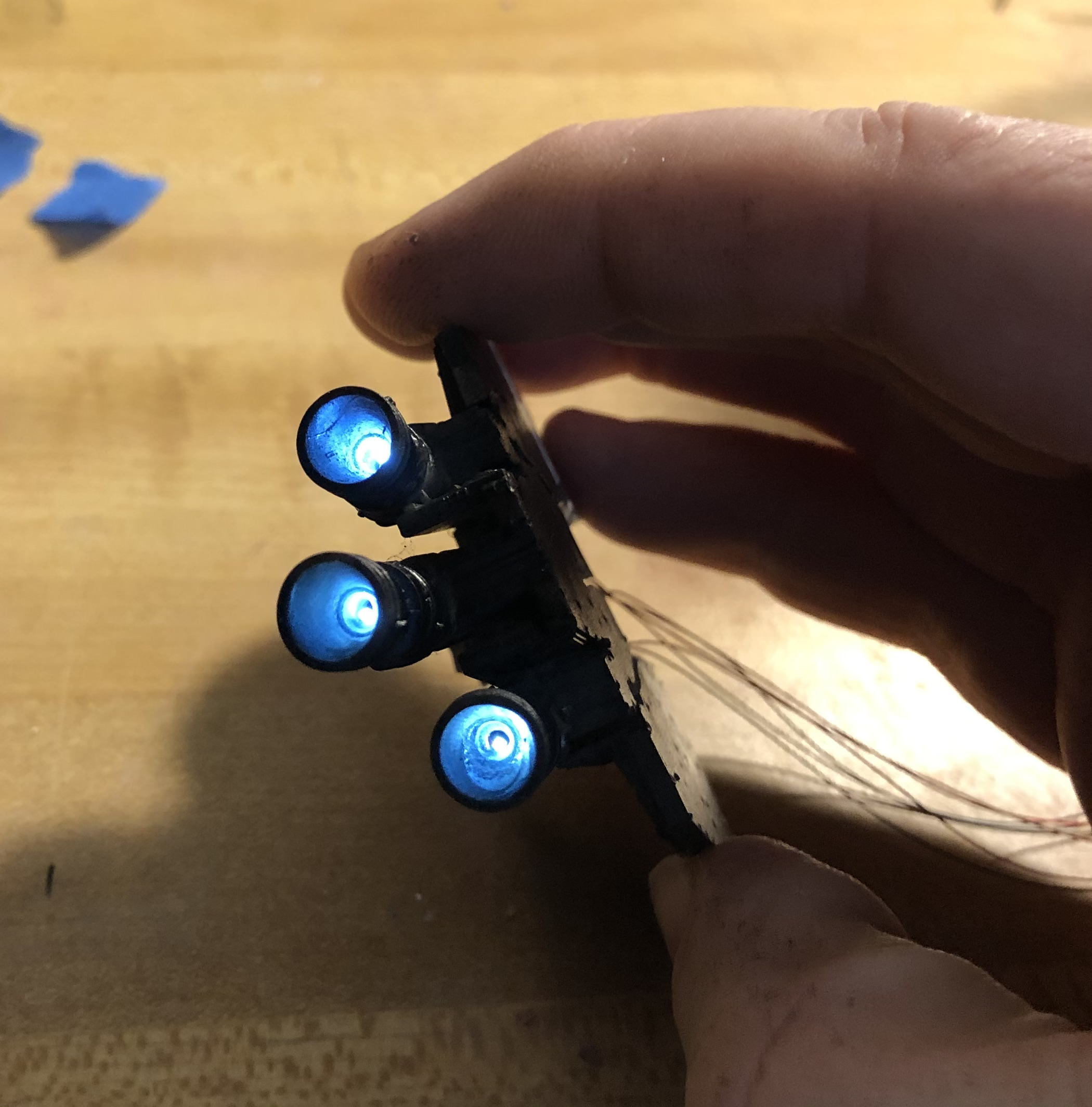 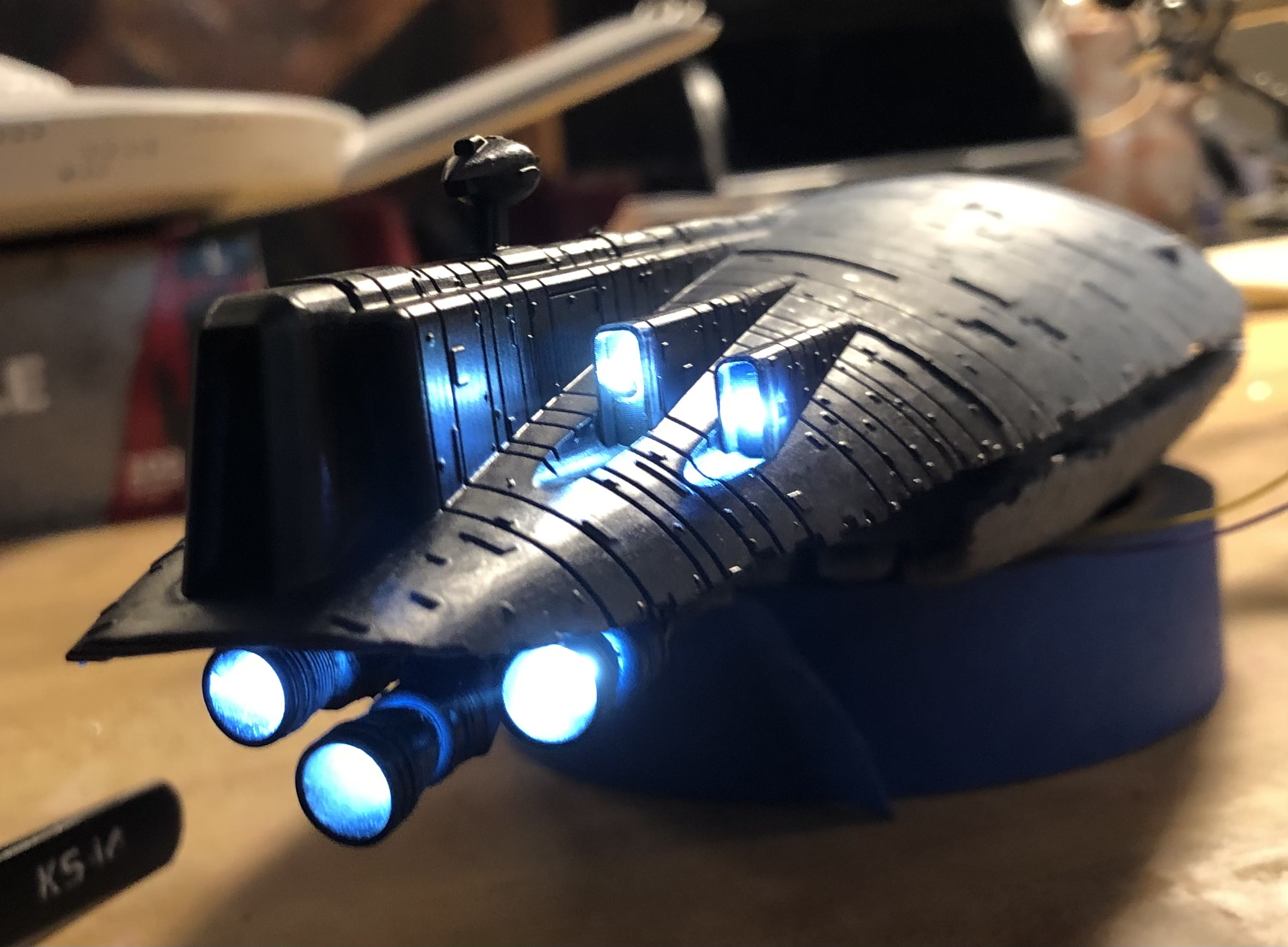 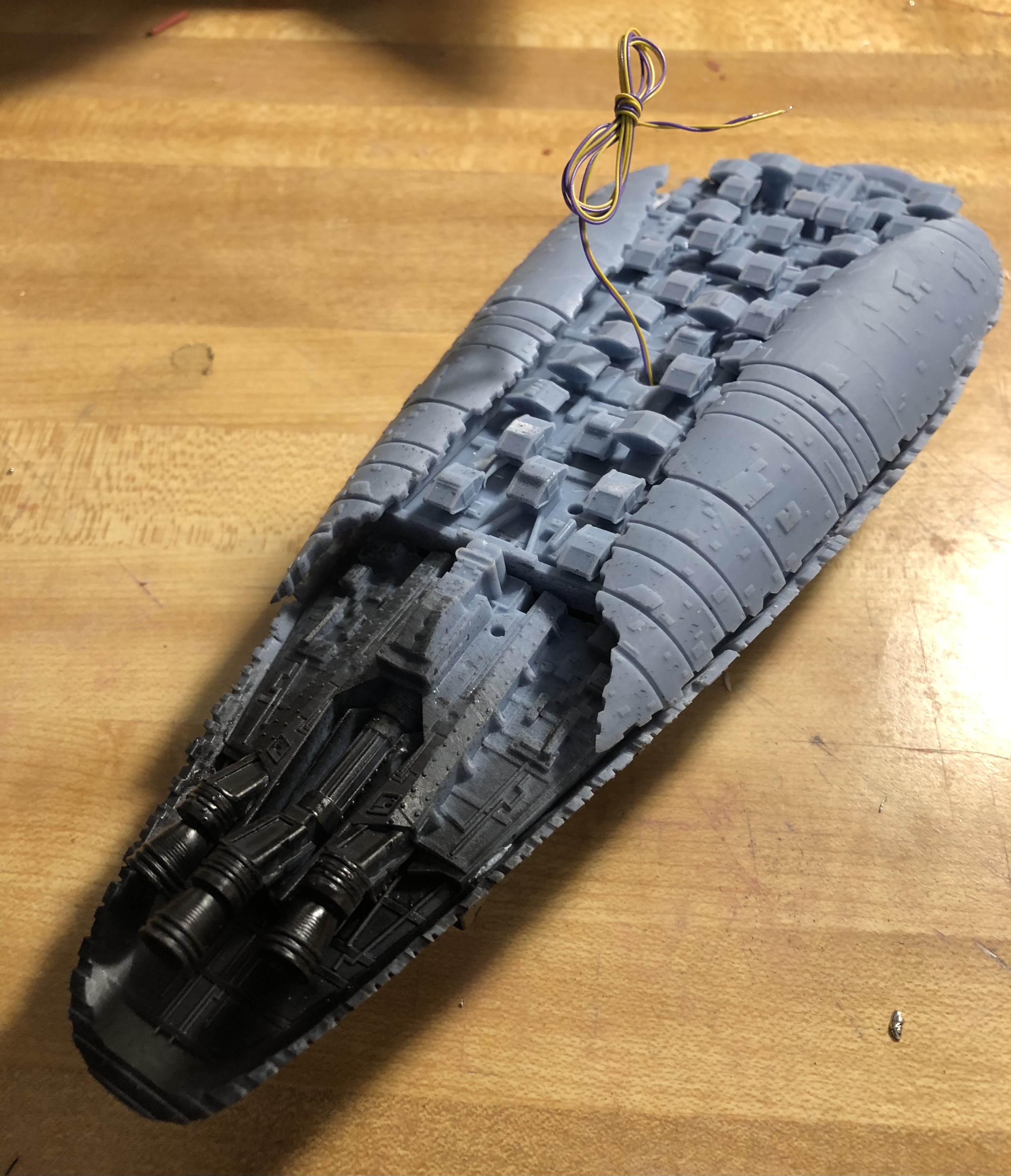 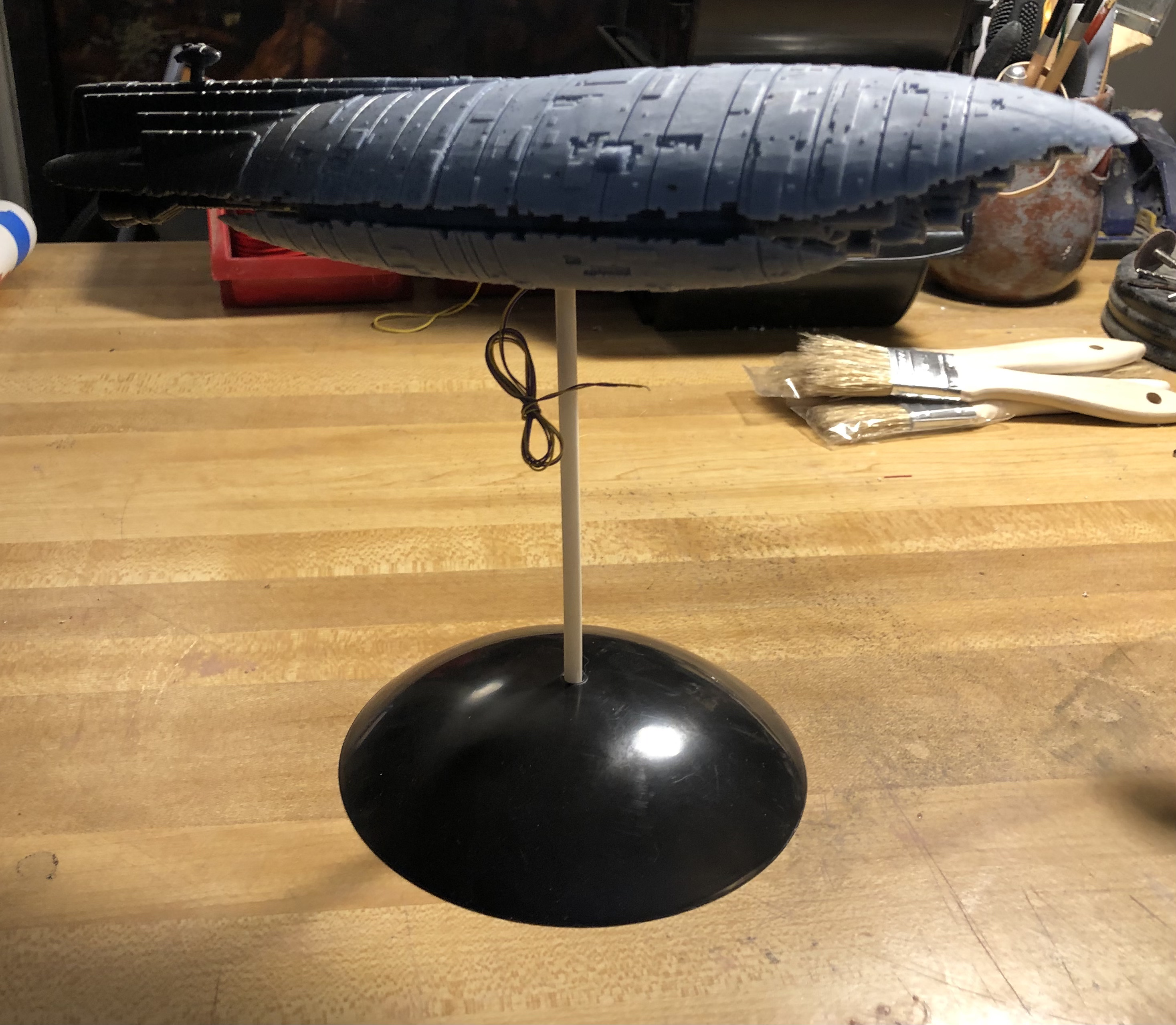 Wires ran, and she's mounted! (I wish I could find more of those Round 2 display stands, I LOVE them!)
Lastly, before priming, I had to see how she measured up to her OTHER new 1/350 buddy (scored this on eBay, blind luck) 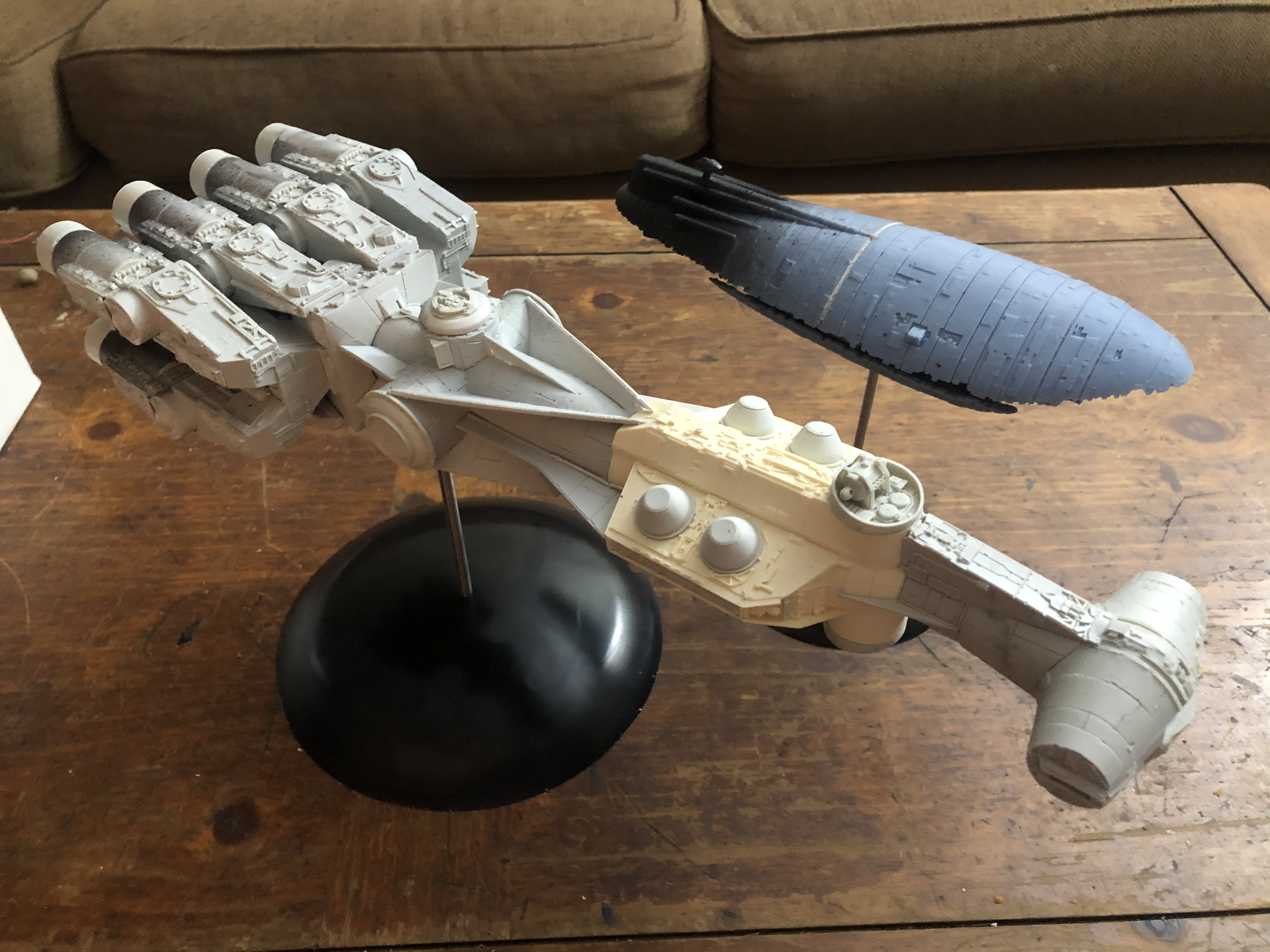 Onto Primer and Paint!

RPF PREMIUM MEMBER
Painting an ILM studio model replica is something that people always seem to make harder than it really is. These were not great works of art (at the time) that were slaved over and detailed with love and affection. They were work projects that were annoying and on a tight schedule and budget. The Rebel Transport was no exception. See only have a few shots in the film, and one was a dang matte painting (Rebel Base Hanger shot).

So I approached this with a simple color palette, which I lightened a touch for the sake of scale. Startedby light blocking the rear in satin black, then with Tamiya grey primer. 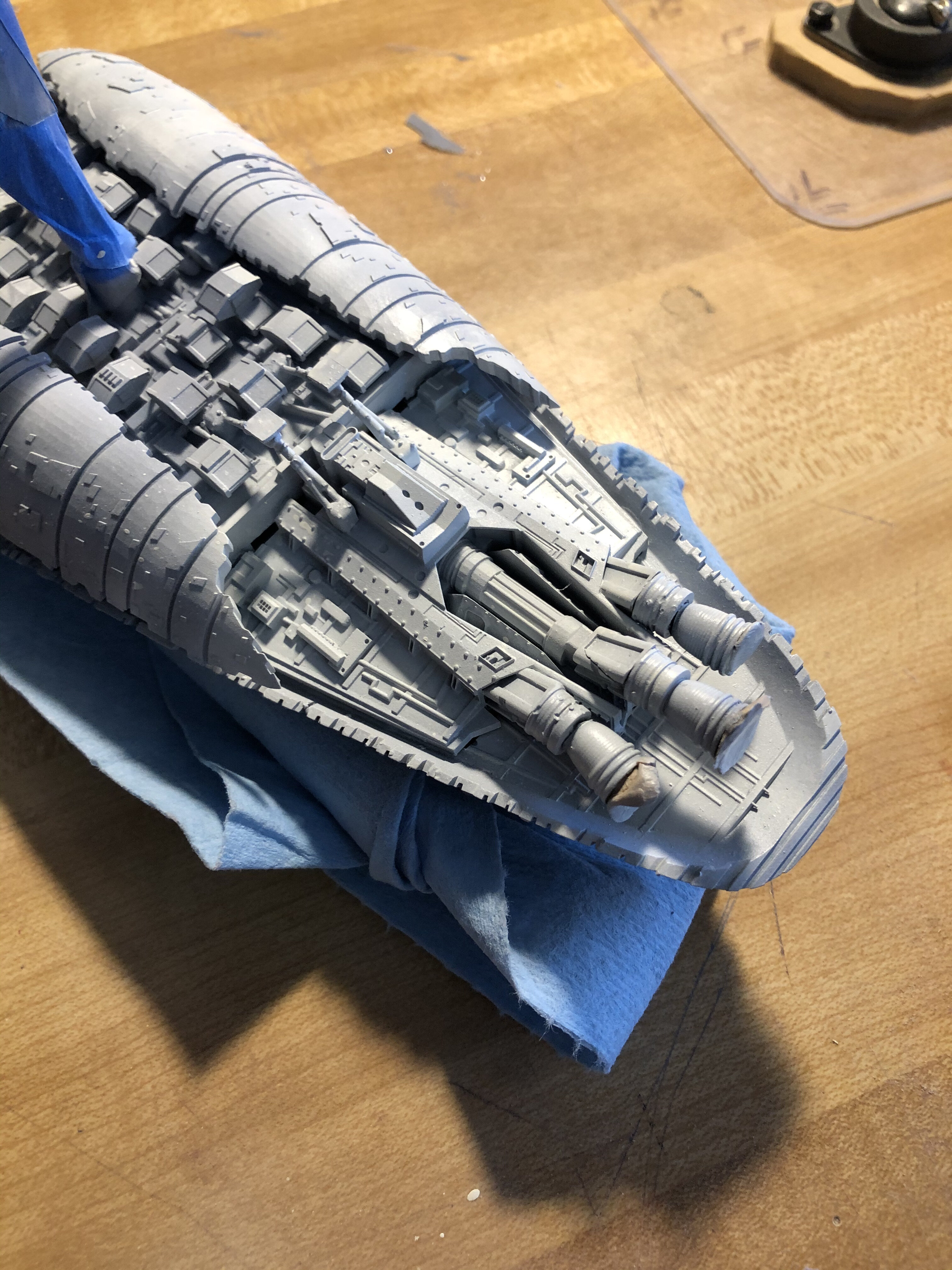 Oof, that detail.
Once the primer was on, I fired up the airbrush and did some light presiding in white. I followed panel coloring from my references. 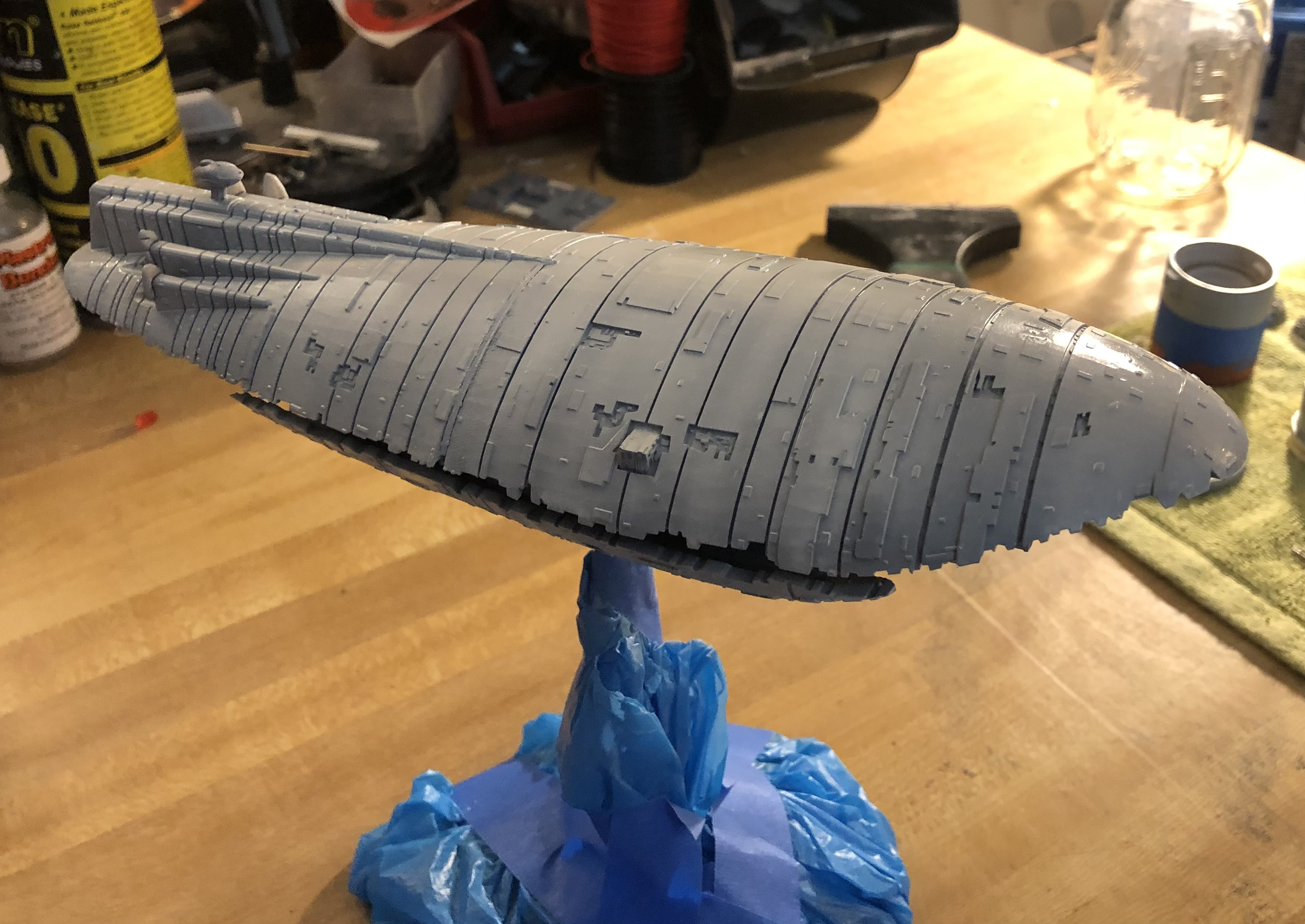 Then I gave her a base coat of that famous Rebel warm off-white color they seem to love, and went darker and heavier in spots, and lighter in others, using the grey primer underneath to my advantage. 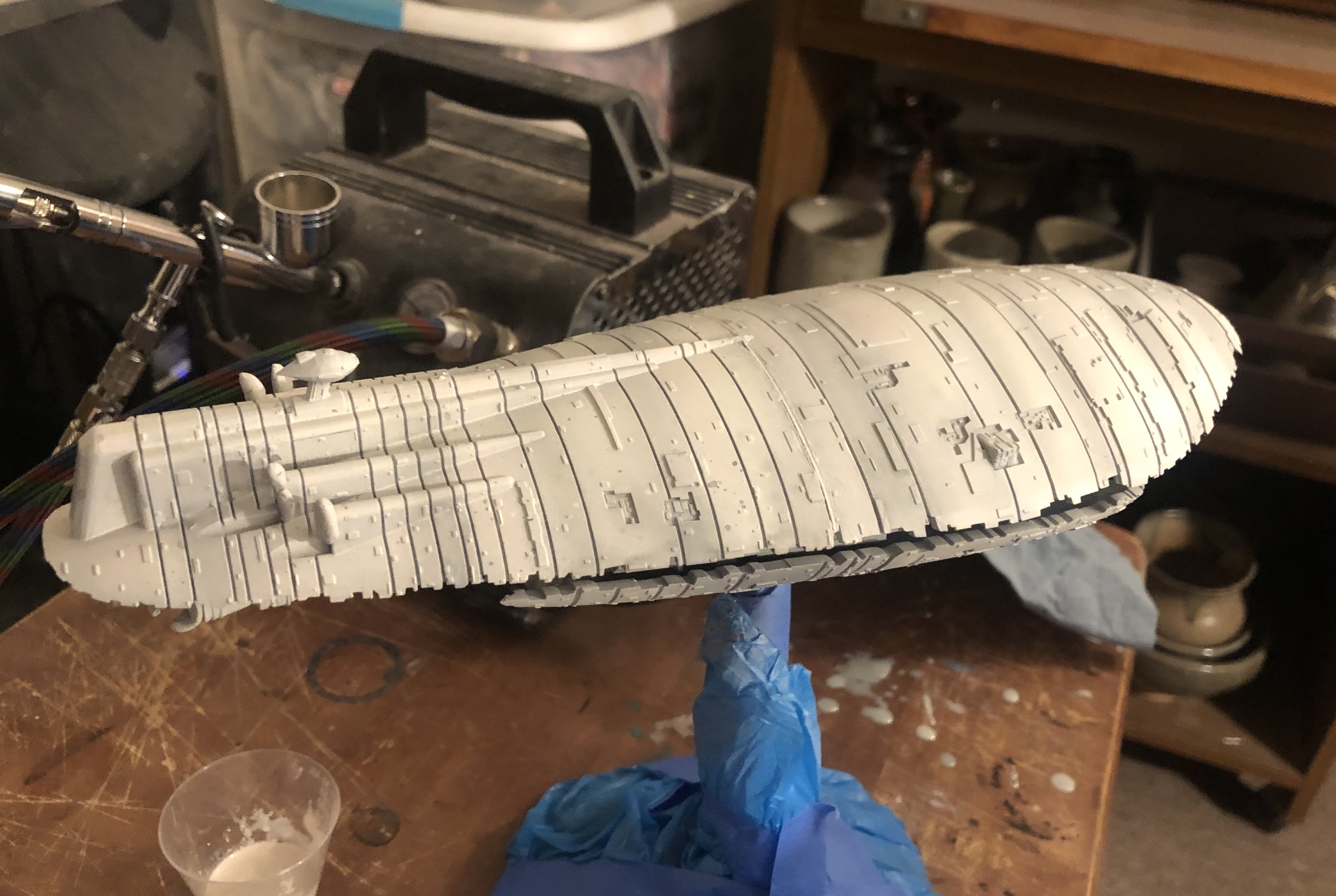 Then, using a tried and true ILM technique, the post-it note, I started to add the panels and coloring, using the typical Star Wars colors of pink, brown, grey, and white. I kept it light since we are trying to keep her in scale with the other ships. Too heavy a paint and she'll look like a out of place overweathered freight train. 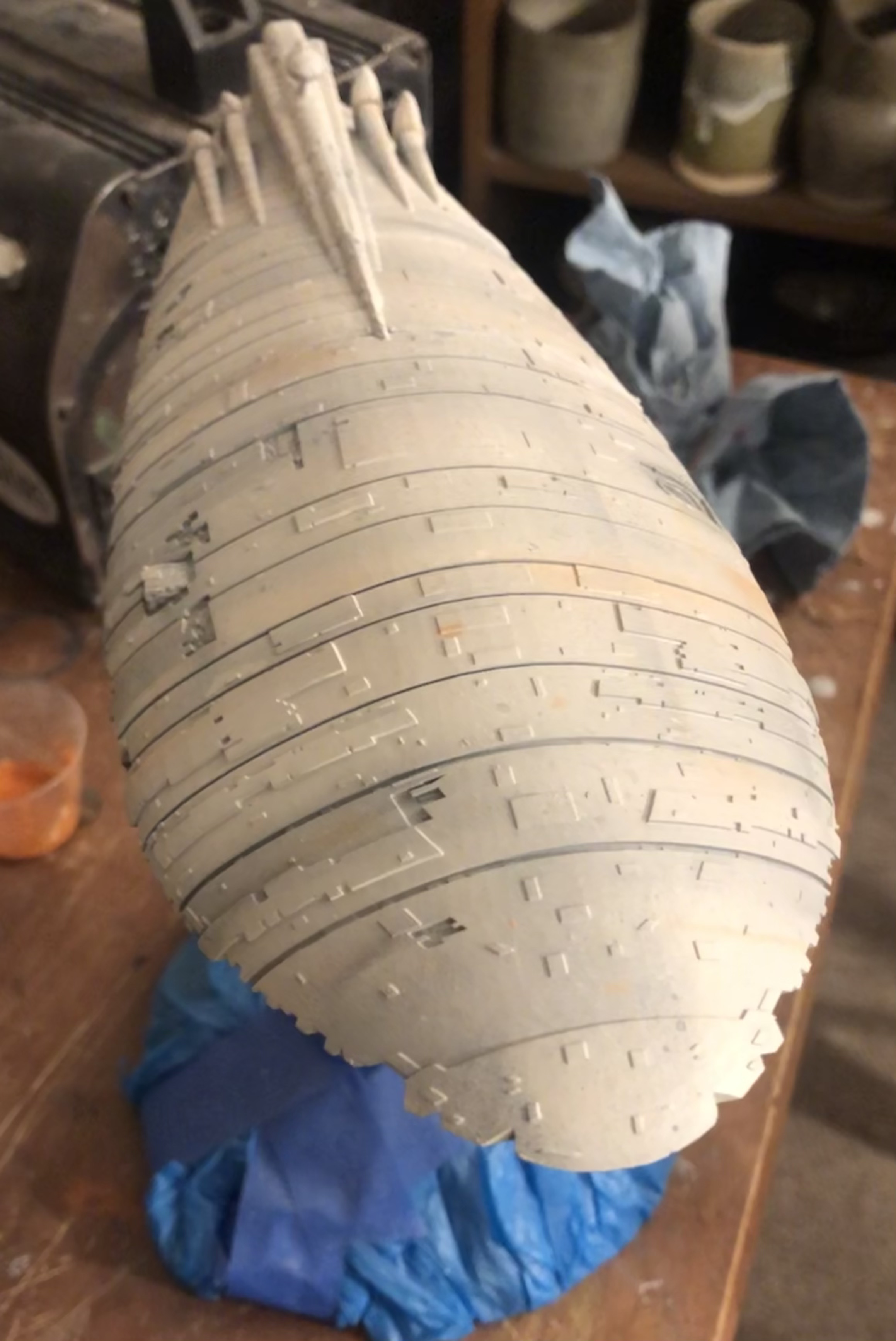 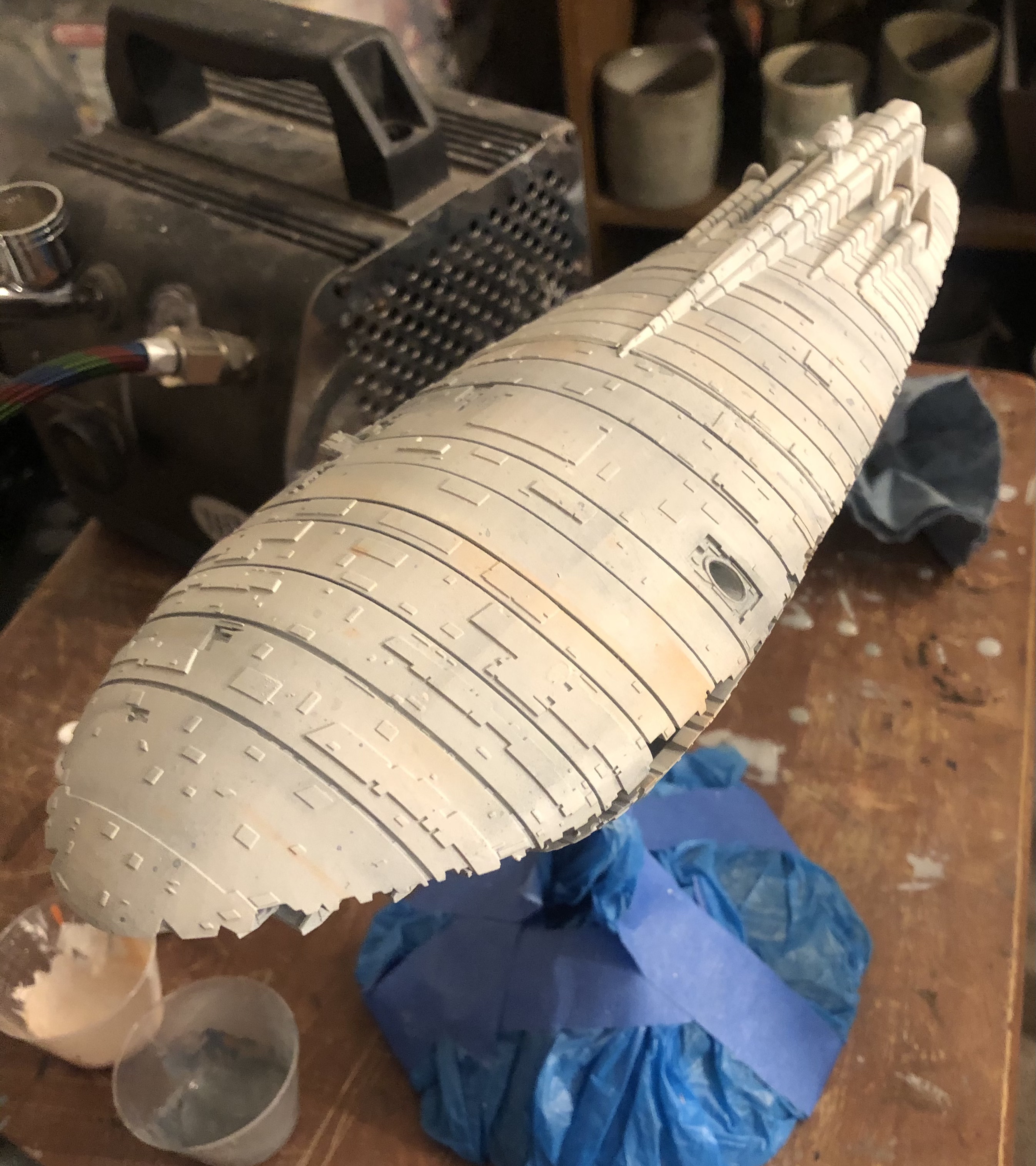 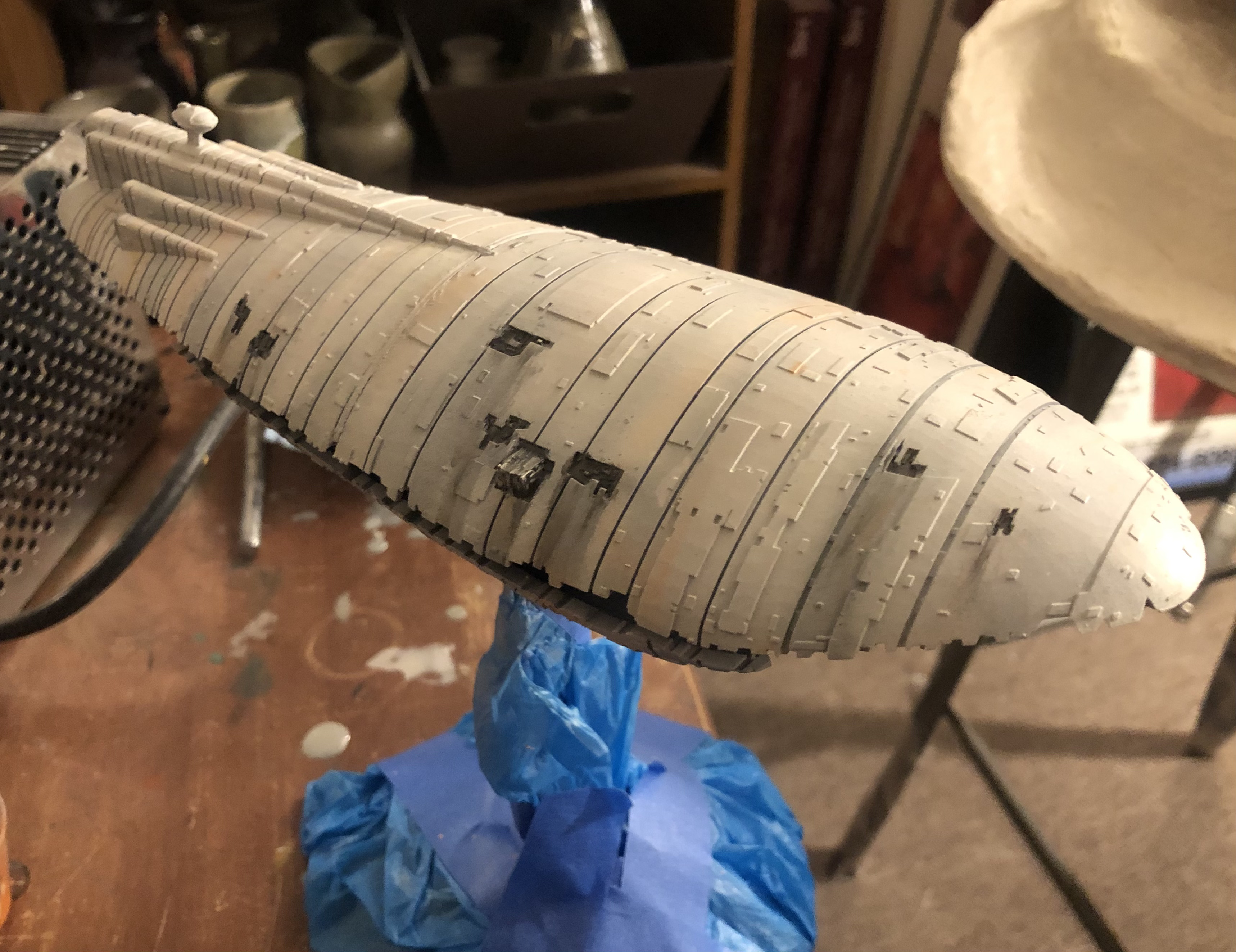 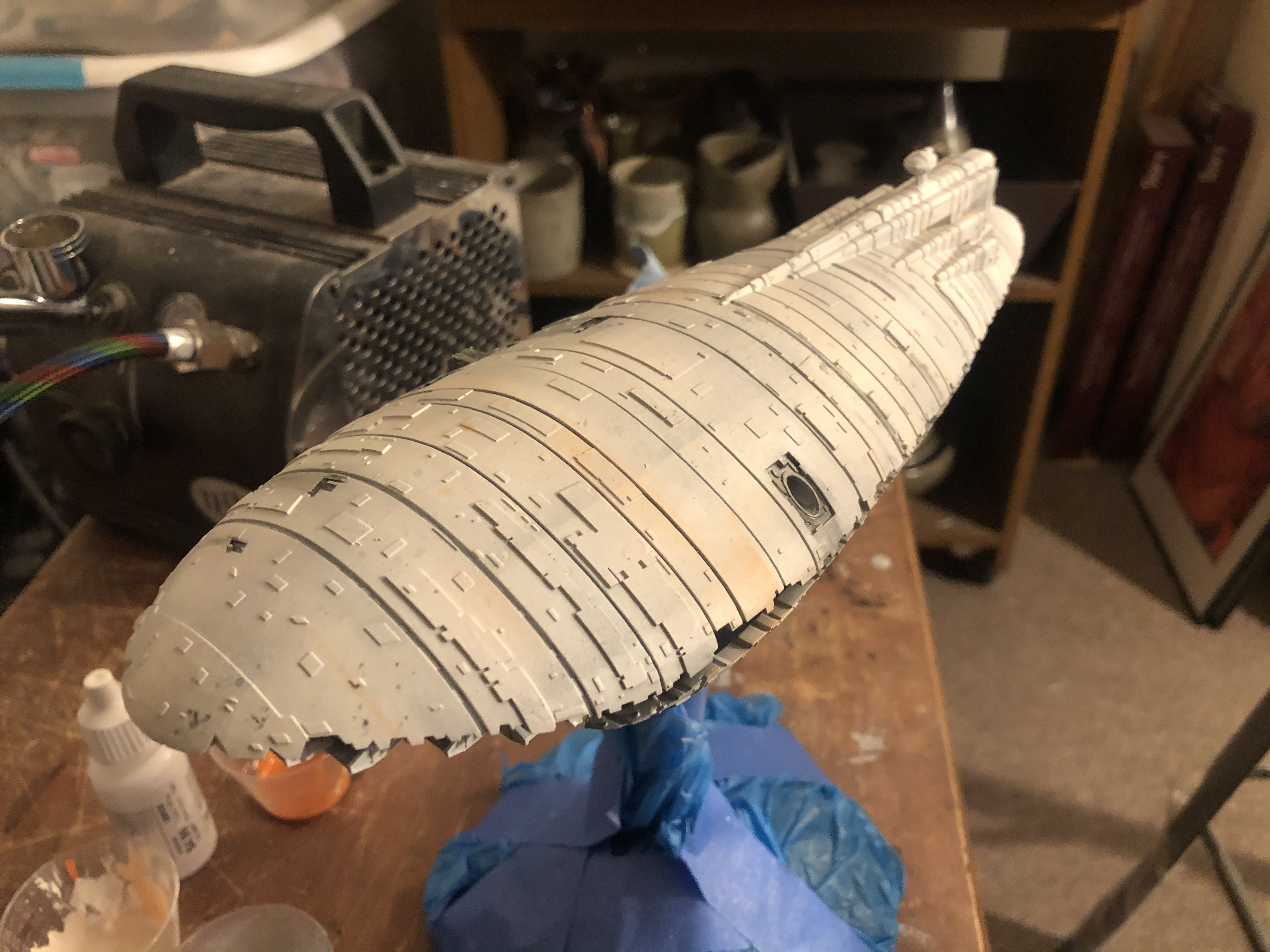 Then one last blast of detailed weathering and streaks. nice and oily... 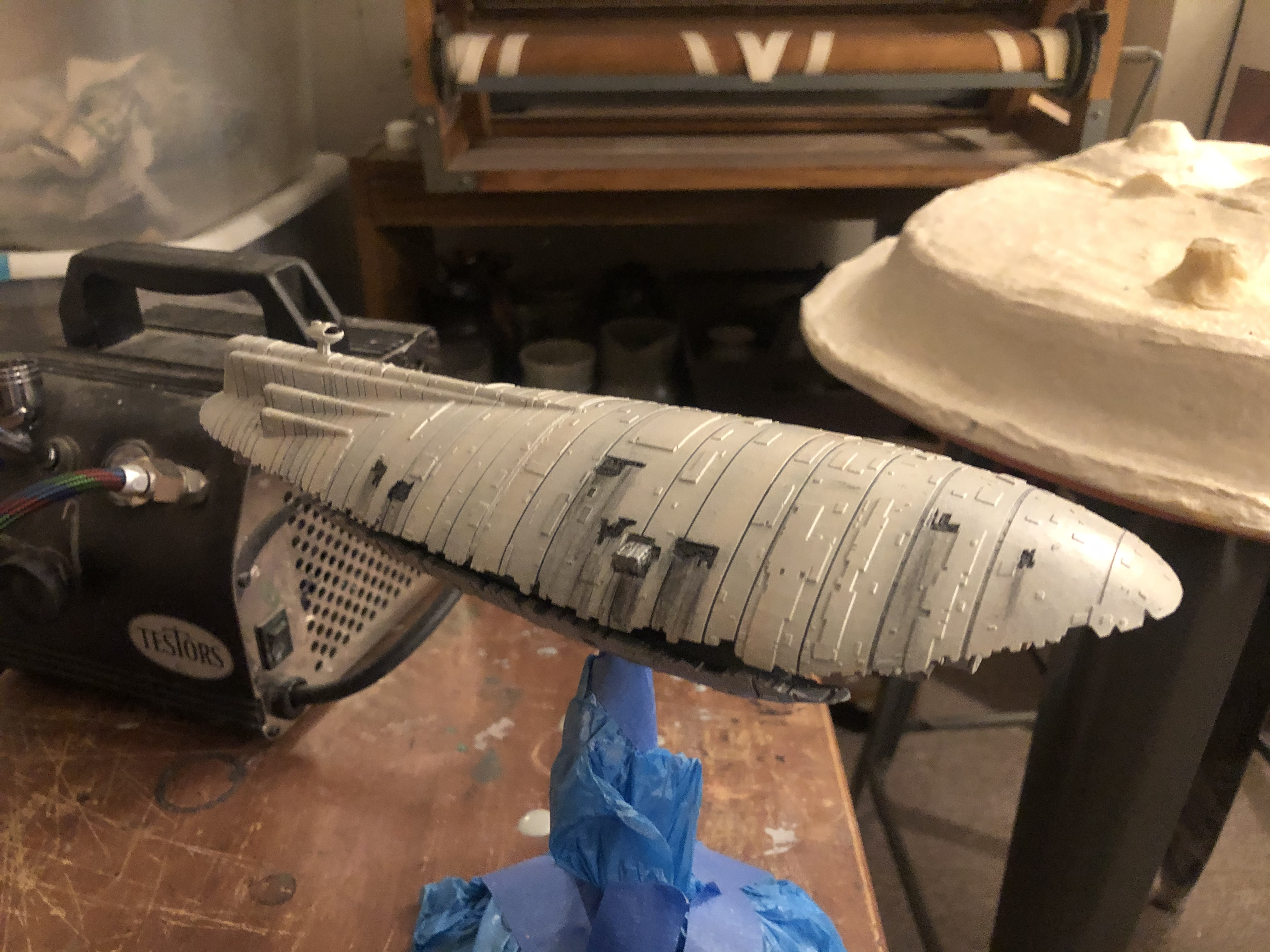 and then a final misting over top of the 'buff' off-white color to balance it and tie it all together. 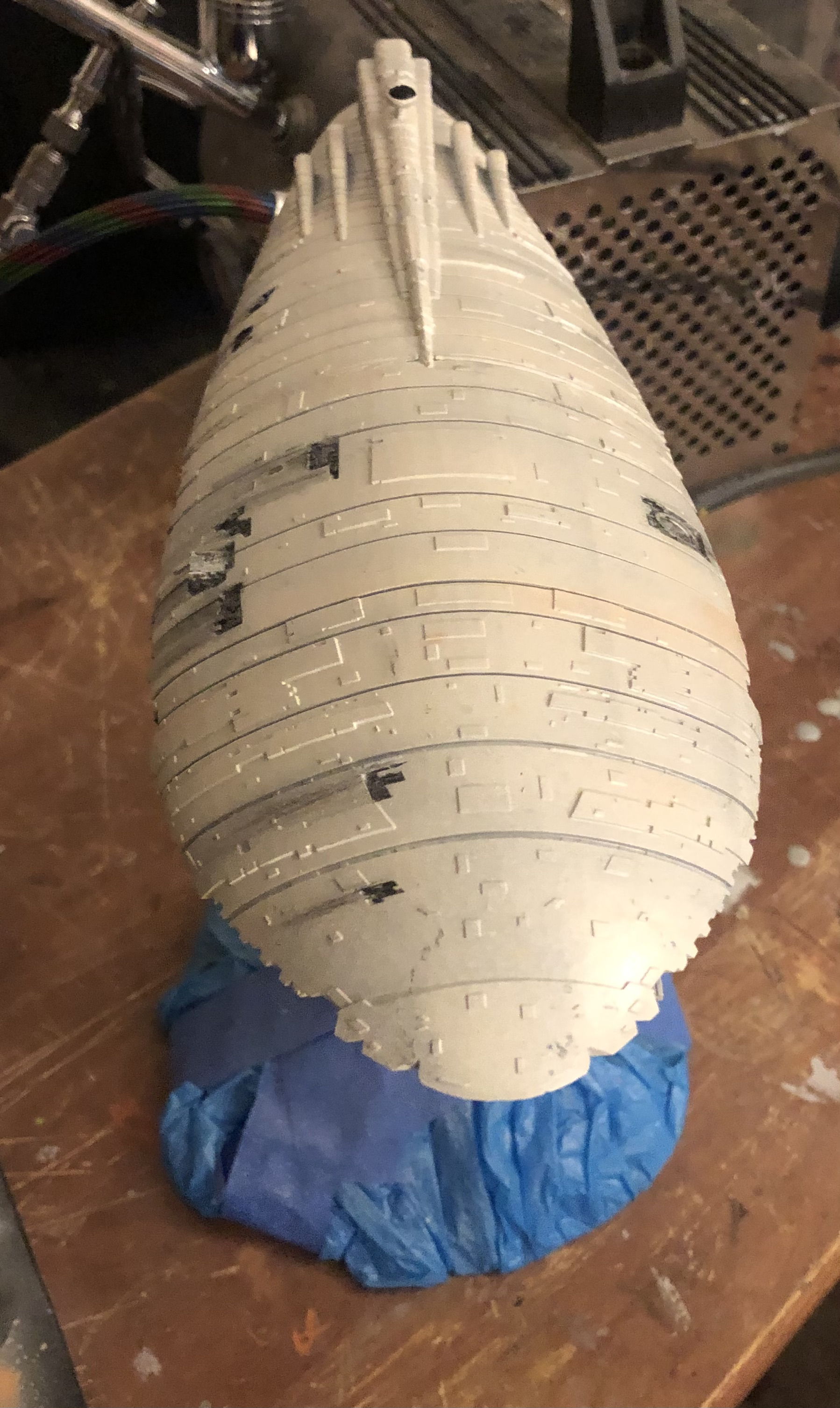 After this there will be some detailing of the brown 'panel's peppered all over her hull via frisket, and some splatter and dressing near the engines will complete the top. Then I'll seal in satin clear coat.

Coming next, the underside and allll those cargo containers!

You sure turned this into a work of art quickly! Lovely job lighting it and painting it.
I too am feeling the pinch for a resin printer now, not traditional but the scope of modelling you can achieve is insane.
Cheers,
Josh

Love the lighting mods you're doing to it too