You will feel an itching... DUNE fans, rejoice! :)

I'm sure we missed quite a few Atreides, Fremen, Harkonen, and Sardaukar weapons and props throughout the film because the scenes were either cut or they were obscured in the background behind the action. I don't recognize any of them, but maybe some of you can:

I have the hi-res shots of each of the small ones in my composite, so if anyone would like to see a particular prop enlarged, please just specify which one. Many of these are supposed to be static electricity generators, collectors, and wands (even the spears), while others are water distillation and storage devices. I believe that in the shot of the Fremen canteen (second from bottom left), there's an early mockup of the Pain Box and a weirding module throat piece:

*BUMP* for those who haven't seen this thread, and in the hopes it will get archived for its wealth of behind the scenes prop info.

Gabe... Didn't see any shots of this in your photos but thought you might like some pics to go with your find.

Congrats on an awesome piece.
Chris 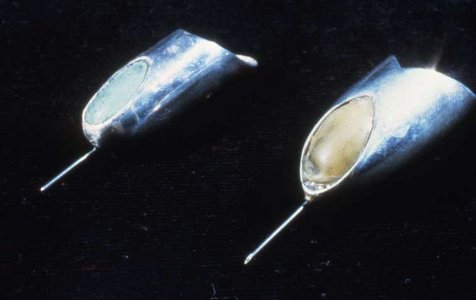 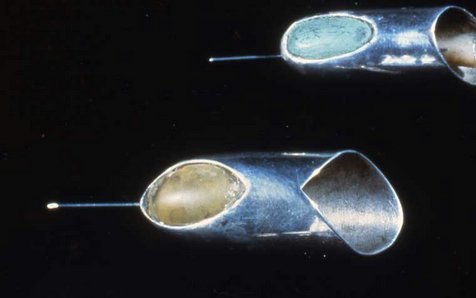 Another shot from durring the production... This is from a series of Polaroids I picked up a few years ago. Its a nice shot of your new toy in use. 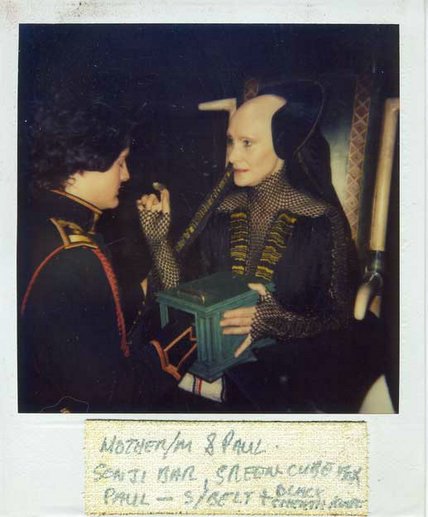 Hope you enjoy... If you want a higher resolution of this or of the Gom Jabbar shots just let me know.

Holy Shai-Hulud, Chris - those are SWEET... :eek What other DUNE goodies do you have? It's so hard to find ANYTHING from the production still around, which is why I consider my score a minor miracle...

And yes, I would absolutely *LOVE* to receive hi-res versions of these two photos, and anything else you care to share. I'll try to repost all the original thread pics back up later tonight or tomorrow - I just need to make sure they're all in the same order... And of course I'll extend to you my offer for hi-res copies of anything you like. My e-mail address is proprunner@aol.com

Thanks again for sharing your find. That is some awesome stuff.

Now where can we buy some stillsuits?. ha.
Chris

Awesome score!
It really is one of the MANY memorable scenes from that movie.
Ron Miller is a really approachable and friendly guy - he was kind enough to loan Me several of the original model blueprints for Me to copy for My Dune "Special Edition" project... though I think he has sold most of his collect off now (Josh Zyber over at Dune Stuff has a HUGE Dune collection)

I see other props/models/costumes up for auction on ebay from time to time.

You can see more of My models over at My blog: http://dunese.blogspot.com

RPF PREMIUM MEMBER
Re: You will feel an itching... DUNE fans, rejoice!

Guess the new guy didn't notice this thread is about 100 years old and the author has been banned.

RPF PREMIUM MEMBER
Re: You will feel an itching... DUNE fans, rejoice!


Rylo said:
Guess the new guy didn't notice this thread is about 100 years old and the author has been banned.
Click to expand...

Looks like he's just interjecting into any thread he can find pertaining to [Lynch's] Dune. *shrugs*

I wondered why all the pictures we're broken when I opened the thread and then noticed it was 5 years old. :lol

Sorry about that.
I'll read things a little more carefully in future...

No - you did nothing wrong.
A certain member with 1000's of posts to his name recently posted on a 4 year old Alien thread...
Resurrecting old threads is fine- when was the last time Dune was mentioned ?
;-)

PS The sandworms in Dune were brilliant

I"m sure he meant well
L

still need to have the parts made for mine:

RPF PREMIUM MEMBER
I say resurrect is you have something pertinent to add. If it is a 'gee, cool stuff ya got there' then don't bother. Of course what I say means nada.


clutch said:
I say resurrect is you have something pertinent to add. If it is a 'gee, cool stuff ya got there' then don't bother. Of course what I say means nada.
Click to expand...


Heck, I say issue an infraction point for anyone who bumps a thread that is like two years old just to say "Bump" or "cool". Honestly, nobody cares if you think a three year old thread is cool :lol

If you don't care, then don't post. Sure this thread is old, sure the starter of it is banned, what does that matter? Its about the information contained with in it, which is good

Yesterday at 10:30 AM
vitacura

What’s on your print bed?

Yesterday at 4:03 AM
skiffy