RPF PREMIUM MEMBER
Has anyone ever heard/read any information about the brand of cigarette lighter used by Sean Young in the VK-test scenes of Blade Runner?

From multiple viewings, and the lighter my mother handed down to me, I believe Rachel's lighter could be an S.T. Dupont lighter. I base this off the fact that when she strikes it, she strikes the side, NOT the top as you'd see in a Zippo or Ronson lighter. The S.T. Dupont lighters have a cylinder striker built into the side of the case as well as a flip top lid. The lighter I have has an adjustable wheel/lever that determines the height of the flame.

A Zippo lighter wouldn't produce a flame that high that is that tapered at the bottom of the flame. The S.T. Dupont lighters used pressurized butane where Zippos and Ronson lighters use basic lighter fluid. The fuel is under pressure, and if the wheel is set to maximum flow it will produce a flame that high that tapers as it reaches the nozzle. I'm by no means an expert, but from the footage in that scene we see her do two things, one is flip open a lid on the lighter, and the other is light it by swiping/striking the side of the casing, aside from the lid, Zippos and Ronsons use a top down striker wheel or lever, but not a side mounted one.

Here's a pic showing the difference between the mechanisms

Here's the website for S.T. Dupont, have a look and you'll see that the design is very similar. As for which model might have been used, there's not enough visual images to make a positive determination.

RPF PREMIUM MEMBER
Thanks Collektor that's great info about the pressurised fuel and it agrees with my research.
I watched a youTube video of a guy reviewing a vintage Dunhill Rolagas lighter and it struck me really hard that the actions he uses are pretty much the same as Rachel's; He flips the lid, rolls the side-striker with his thumb and then he turns the lighter over in his hand and adjusts the flame length using the button-wheel on the other side. This seems to be exactly what Rachel does in the VK scene.
The Rolagas lighter also seems a bit slimmer than the Dupont, which may fit the feminine hand better.

I think after all these years this is probably one of those small incidental props which will never be clearly identified. 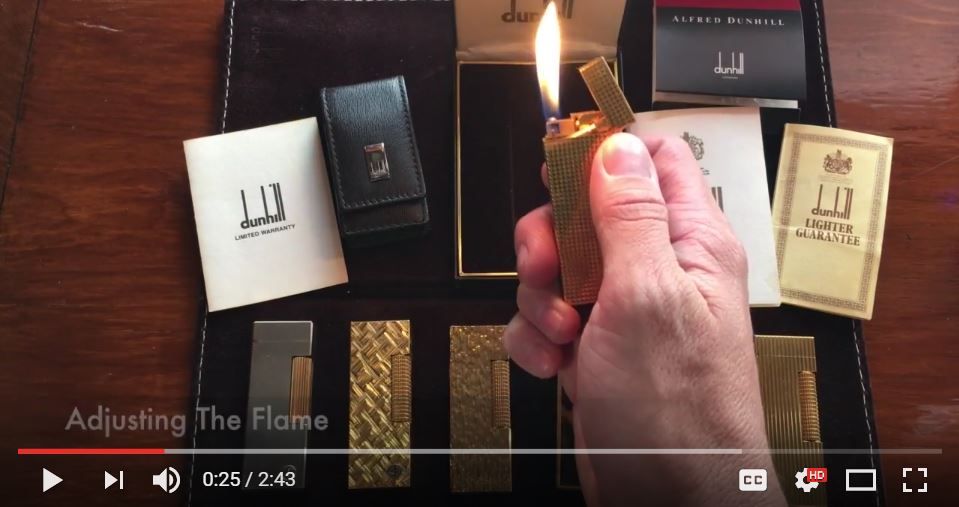 RPF PREMIUM MEMBER
Looks right to me, @userd1402. Reminded me a lot of Betty Drapper's lighter from Mad Men(lots of shots throughout the show). The show was based in the mid 60s and a quick google search I came up with this:

Which looks a lot like the bottom row of lighters in the picture. So I'd say, solved....?
T

RPF PREMIUM MEMBER
Well, if I get the gold Rolagas model and it turns out to be wrong I can simply swap it from my Blade Runner display to my Kingsman: The Secret Service display as it was used in that movie by Taron Egerton and Colin Firth as a disguised grenade. 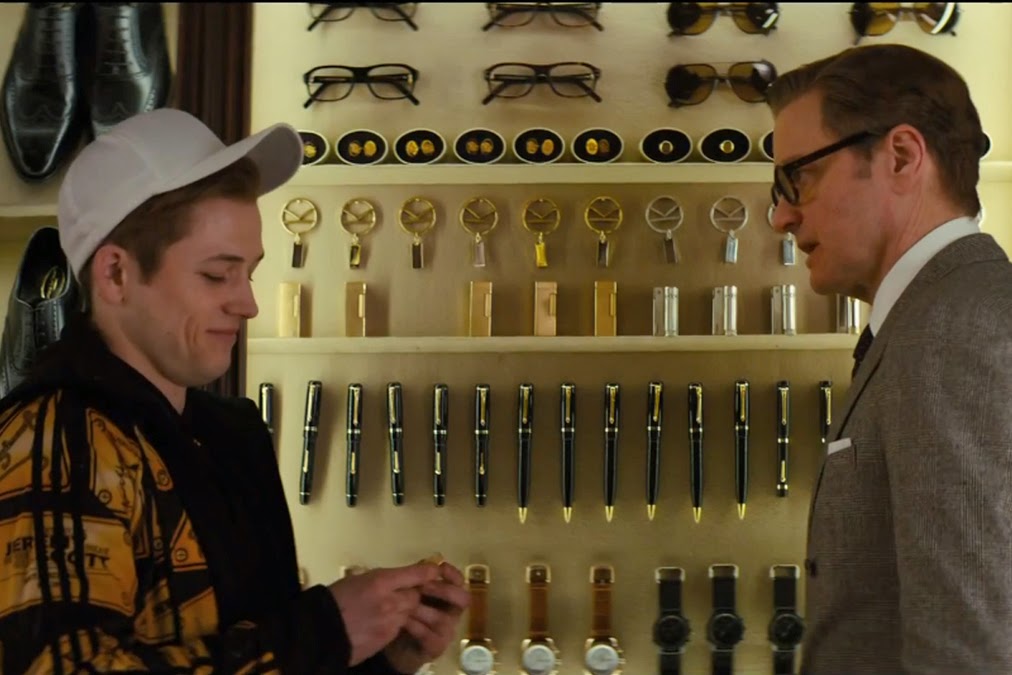 Problem is: there's no lid and no wheel on Rachael's lighter. Push button and pressured butane, sure...but that's about it. :confused

RPF PREMIUM MEMBER
Just watched it again in HD and I agree there's no lid flip. But I still see a side thumb-roll.
Last edited by a moderator: Nov 9, 2018

This movie is a funny one in terms of props and how the set decorators applied Ridley sense of design (don't forget, he made commercials for years before going to film making).
Many props are changed, replaced, put back again in different places (just study Deckard's apt. and you'll see what I mean).
There are pics of Rachael with a lighter with a wheel at the side. But, in that scene, you can see clearly that she's not using that type of model. (I've used one and I know that your hand (thumb in particular) will not do the movement she does using the lighter. It was easy to have a push button type: fires right away and is better in terms of the way Ridley sees the Replicants: perfect and without flaws. Look how she prepares the whole movement: take cig from box, start the lighter and light the cig. Seems she has done that action a thousand times. It's like those SS officers lighting a cig. No waste of movement or time.

joberg said:
There are pics of Rachael with a lighter with a wheel at the side.
Click to expand...

Try as I might I can't find any. Do you have any reference material?
Last edited by a moderator: Nov 9, 2018

If I remember correctly, there's a B&W pic of the Tyrell's set (table + V.K. suitcase and various props) on Hunterwasser (Futur Noir site) or on Propsummit...

This question of what Rachel's lighter was came up in my Lighter thread on lighters used in movie props. I did find this picture of the lighter. I'm still looking, but I'm not sure what it is. It does seem to match the lines on the side and the top doesn't open.

Found a photo of the front too ("Dolly" is probably not the brand or model name, but an engraving): 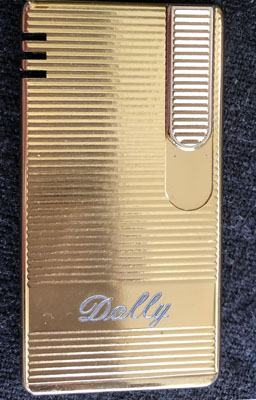 RPF PREMIUM MEMBER
The lighter was identified recently by a friend on the Propsummit facebook page. It’s a vintage Colibri Electro-Quartz model. They seem to be pretty rare with this configuration button. Two friends have found them. I’m still looking for one myself.

userd1402 said:
The lighter was identified recently by a friend on the Propsummit facebook page. It’s a vintage Colibri Electro-Quartz model. They seem to be pretty rare with this configuration button. Two friends have found them. I’m still looking for one myself.
Click to expand...

It's funny. I was actually looking through Colibri lighters (as they had some similar "slide switch" models), but I couldn't find that exact one (not even a picture beyond that page that showed those two pictures off but didn't identify them). I'm having a similar issue trying to find the pocket lighter from the movie All Through The Night with Bogart. It looks like a Thorens "style" lighter, but I can't find the exact matching "top" that goes with the movie. Maybe it's just a hard to come across model.

How does he know it's that exact model? You can only see the top corner of it, really (Rachel's hand hides the rest). I found another model that looks the same in the top corner, but doesn't match the one shown there. It's also an electro-quartz and quite reasonably priced (although it does have engraved initials on it...too bad they're not Rachel. 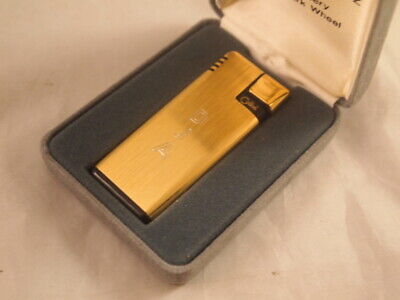 The lighter has DJA inscribed on one side of the lighter. I'll get back to you asap.
www.ebay.com

This is interesting.... same top/side, but "WIN" brand/labeling. From all you can see in the movie, I don't see how one can assume it's a particular model when several match the "top/side" part shown in the movie unless someone actually saw the original prop. 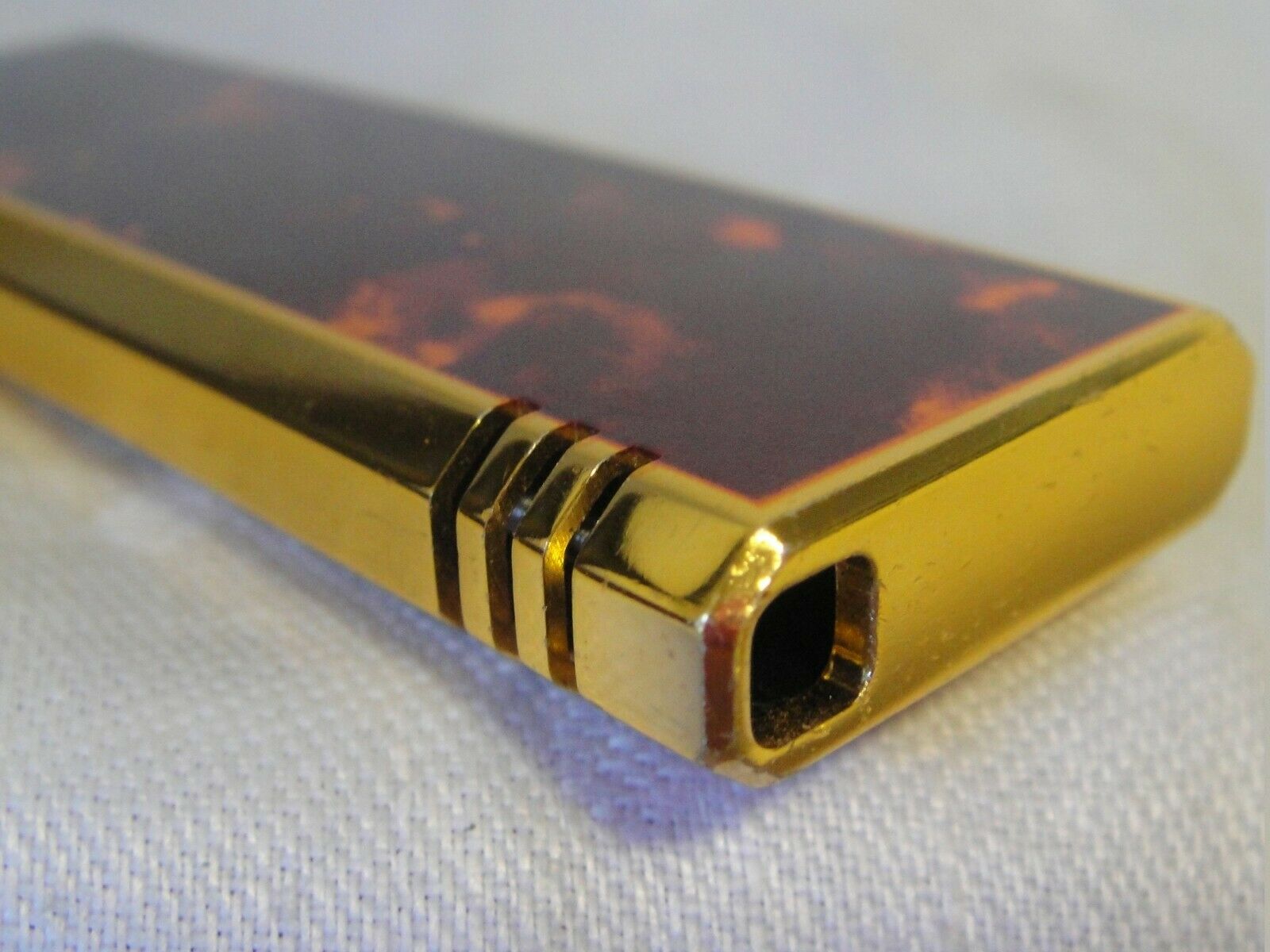 I went ahead and ordered the "WIN" lighter above (for $19 shipped, I figured what the heck). WIN is a Japanese brand lighter that seemed to do similar looking lighters to other famous ones. Given the Asian presence in Blade Runner, it could fit too. I'm not sure if it's electric quartz or not (doesn't say, but ha a similar slide switch on the side). This one is gold with tortoise on the side (can't see any pattern or lack thereof in the movie as her hand covers it). I'll probably put it under my Blade Runner 2049 poster as I don't have an original Blade Runner poster in the room (can't fit everything).

Well, even if it's not the same lighter Rachel used in Blade Runner (The Colibri and WIN models looks almost identical on top and the top corner from the tiny bit of it you can see in the movie, IMO. This one is gold with a tortoise finish (her hand covers it so who knows), but either way it's a pretty sweet lighter. Electro-Quartz (piezo electric) spark butane powered with an adjustable flame from about 1 inch to 6+ inches with a jet flame adjusting the screw on the bottom. I've got to say I might have to make this my new regular lighter instead of putting it on display. For $19, it's a sweet lighter regardless of how similar it is or isn't to Rachel's lighter in Blade Runner. 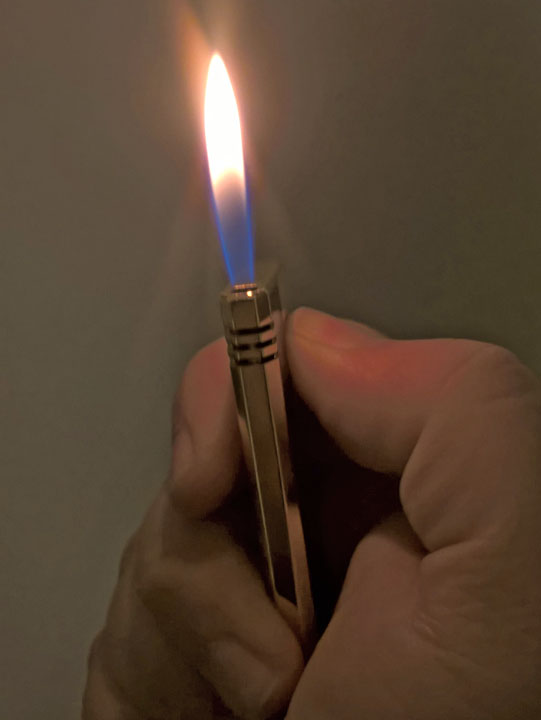