The Trek II and Trek III Enterprise models HAD the engraving in it. It was something added when Ertl took over AMT. What made them different from the Trek IV kit was the stand as the TMP, Trek II and Trek III kits had triangular stand bases that were remeniscent of the stands found in the long box versions of the AMT models from the 1960s (Enterprise, Klingon, Leif Ericson).

Here is a quick and dirty synopsis of the refit kit changes:

TMP Version- Smooth hull with no "mall floor" tile pattern, lights in the saucer, batteries in secondary hull, rainbow stickers for warp engines, rub on transfers for other markings. Triangular stand (which you had to glue to the base of the model to use it)

Trek IV- Same as Trek III except stand changed to Starfleet Arrowhead style where model could be clipped on securely without gluing. Decal markings changed to Enterprise-A logos.

Lighted Enterprise- Issued after Trek V, this kit had lights in it for the saucer and warp engines, blue glowing navigation deflector and a unique stand for batteries and sound effects (TV style phaser and photon effects). Mold altered with openings in saucer and warp nacelles for navigation lights (not sure if this kit had the shuttle)

Trek VI Enterprise- Same as Trek V (including shuttle) except it used the altered molds from the lighted kit (old Nav deflector though), so the saucer and warp engines have openings for navigation lights. Clear parts tree added with raised lights for these areas. First run of the kit included a sticker on the box mentioning the kit had a mini Enterprise D in it. The Mini Enterprise Ds were leftover Galoob toy premium Enterprise Ds that were randomly inserted in specially marked boxes of Cheerios back during ST:TNG's premiere season. ONLY the first run of the Trek VI kits had these as all subsequent runs did not. So if you find a shrinkwrapped Trek VI kit with no sticker mentioning it, it does NOT have it.

As for reissue possibilities... not likely. Reps from AMT/Ertl after they acquired PL and reps from Round 2 after they acquired the rights to the AMT tooling catalog (and Round 2 NOW owns the assets of AMT and Polar Lights, YAY!), said that the 1/537 refit E mold was completely worn out and not cost effective for reissue given its hard life. It has effectively been retired. Only way we might see another one in that size would be if Revell of Germany does one as Round 2 already has the 1/350 and 1/1000 refit kits.

I restored the link the the pic in my first post. Hopefully it sticks this time.

Sometimes, I think that box art is a lost art. I love the art work on this model box - simple, clean, and uncluttered. I love the font of the lettering, and I love the clean black background.

I see what you mean about the removal of the lighting from the box art from Trek II: 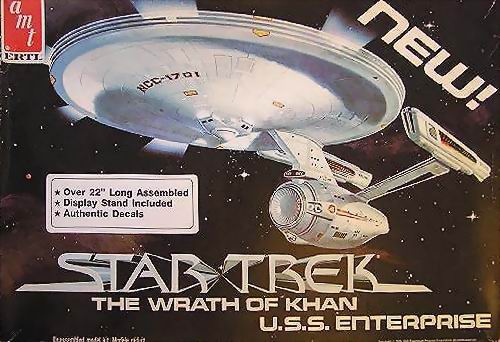 Yup. I love good box art myself and the TMP/Trek II box art was very nicely done (Trek III wasn't quite as good as they got rid of the stars in addition to trying to remove the light glows). The artist that painted it put a lot of effort into getting the TMP E to look right.

In my case I sort of fell for the lighting hints. I bought a Trek II version just a few days before Trek III came out in theaters and I was thinking it had the lights from the first issue in it. It didn't. I was a little confused at the time though since in addition to the box art, the side panels showed pictures of the built TMP model with an obvious light source in the saucer.

It took me a few years before I finally got my grubby paws on a TMP "Smoothie" and there I could see just how much the mold got altered. Some of it was for the better (such as the detail on the warp nacelles). Other bits (the tile pattern) were not.

RPF PREMIUM MEMBER
Open it and build it!
J

Not that rare I don't think? It is a re-release by ERTL when they bought out all the AMT molds. I have an original M.I.B Enterprise re-fit from STTMP.That kit is at least 30 years old and often auctions between $50 and $100 (typically closer to $100).I guess you can try to get as much as you can for it?I'd say the STIII ERTL re-release is worth at least $30-$40.Subsequent releases and re-releases of the kit were modified by ERTL further screwing up the Enterprise and they are worth less.Rule of thumb, the older the kit and the more sought after kit are the first releases of the re-fit Enterprise before ERTL got their hands on it and started F.U.B.A.R.ing it.Most folks who want an Enterprise kit in that scale (1/537 approx.) want the old kits,they are a bit better made and less work done to them.
F

I really like the size of this kit, but given the 1:1000 and 1:350 versions out there now, and the amount of work this particular kit needs (even the 79 smoothy) I don't think I'll ever build another one. In fact I have a smoothy in my stash somewhere that may be donating it's nacelles to the Reliant reissue...

Hearing the differences between the later versions and the smoothies, I find myself compelled to see two completed models side by side for comparison.
J

When it comes to building either of the kits (the ertl re-issue) or the orignial AMT re-fit, I'd have to say that the better kit is the original AMT re-fit. Both kits are idetnical,but the HUGE difference is the quality of plastic.The ertl kits seemed like the styrene was really gummy (at least to me) and the ertl re-issues had that horrible panel engraving.The AMT kit is just made better, and these days, between the acurized decals that are available and the upgraded resin and I think photo etch parts you can make a really nice re-fit in the AMT 1/537 scale.That's just my opinion, but there you have it.

I had this kit back in 1984. Painted it using the directions of spraying the entire hull silver, then misting flat white over top while the silver was still wet. Produced an interesting effect of making the hull look "pitted" by space debris or something. I didn't have a clue about Aztec patterns at 14. :lol

That was my first refit kit. Had it for a couple of decades before she took a bad fall and had to be decommissioned.

Monster Dave said:
Hearing the differences between the later versions and the smoothies, I find myself compelled to see two completed models side by side for comparison.
Click to expand...

Structurally they will be almost the same and share the same issues with the same fixes. The big difference is going to be that the TMP version is smooth and has dry transfer decals, and the later releases have the engraved panel "detail". The other main difference is that the TMP version does not have the grills molded into the nacelles and the later versions do. That's really about it. CultTVMan and Starship Modeler probably have many examples of these kits - smoothys, hand-smoothified later releases and unmodified later release versions.

If you think you might want to fix the kit's issues and would like to see what you would be getting into this is a good place to start. If that seems overwhelming, you can build a nice representation out-of-the-box if you just take care of the basics (seam filling, decent paint and decal job) or you can aim for something in between.

If it were me I would keep it in the shrink-wrap as a collector piece or to sell and i would build the PL one.
U

I'm doing a build-up of a 1979 Lesney Smoothy, I wonder what that's worth? I've still got three in the box in the garage...

Yesterday at 7:13 AM
Hotshot