So, I've decided to try to make a full body armor of Sauron.

The entire armor will be 3D printed. With this I will be able to iterate on the design a lot, until it's as good as I can make it. It also enables me to put in incredible amount of detail and precision into it. The idea is it will not just be the general shapes, but will include all the detailed patterns which covers large portions of the armor. 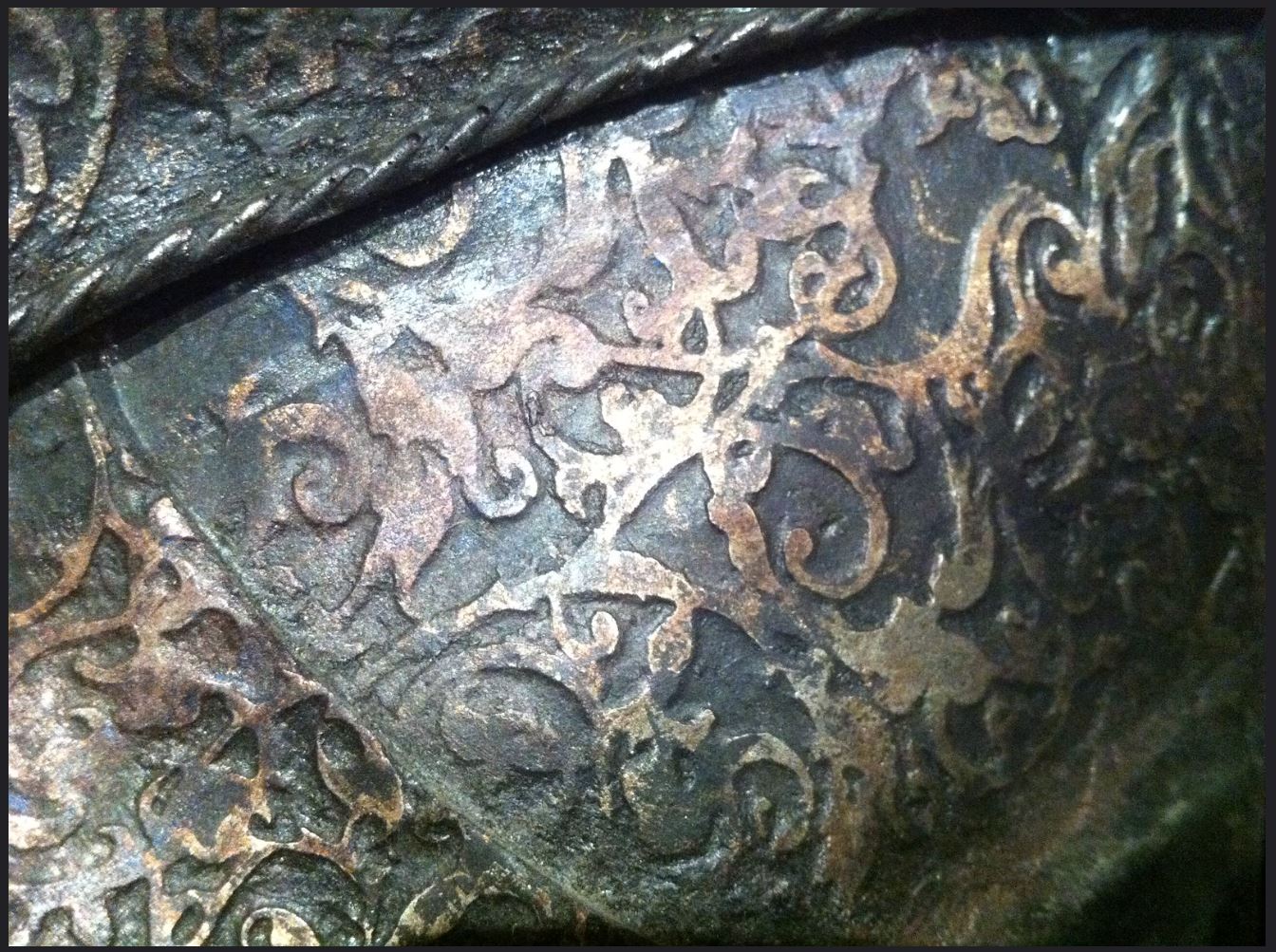 Sauron's armor is pretty weathered, I'm considering making mine slightly more pristine. As if it was closer to being newly forged.

The entire armor will obviously take a lot of time to print, but, I can do things in parallel. I can print a part while im working on the next one.

Given the limited amount of time he is even visible on screen there is not a lot to go on. Even photos of the armor from exhibits are surprisingly few. And there is only so much visible in the extra material footage.

Another challenge is making the armor fit my actual body, It obviously it has to be big enough that I can get it on, but not so big that is slides around, so the precision has to be quite precis. Will likely need to print many parts several times for a perfect fit. But I want to keep this down as much as possible, feel bad about wasting plastic.

So, I've already finished the first pass of the entire armor, so I could essentially start printing if I wanted to. But I want to achieve as high accuracy as possible. So this is where you come in. I would be very much appreciate ANY FEEDBACK anyone might have as to any inaccuracies the armor has, or even more so, if anyone has any photos of the actual armor. I believe it has been shown on various exhibits throughout the years. If anyone has any photos, please post some.

I know of 2 pieces that are missing here. There is a elbow guard and a piece in the inside of the knee, not sure I will include those. 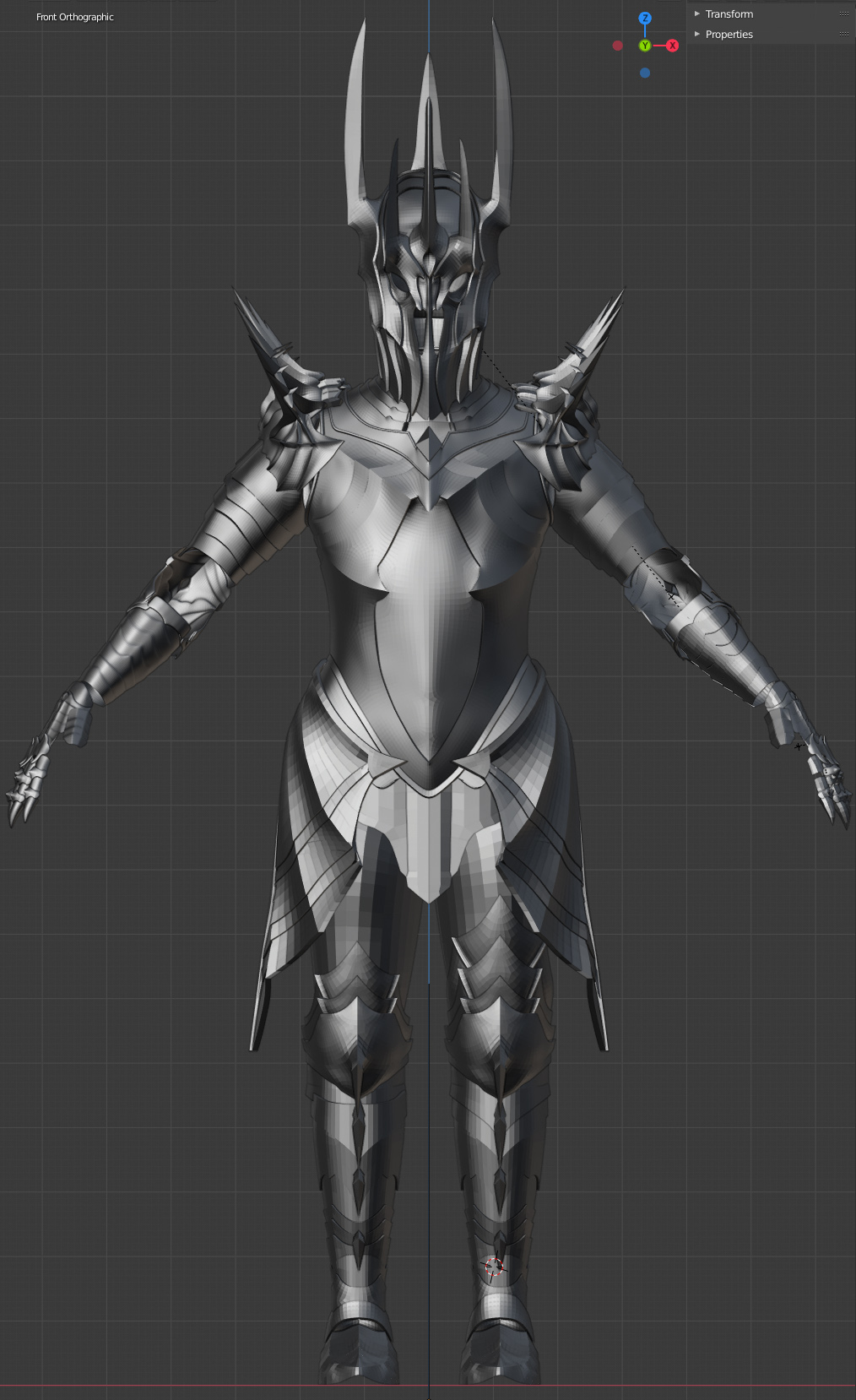 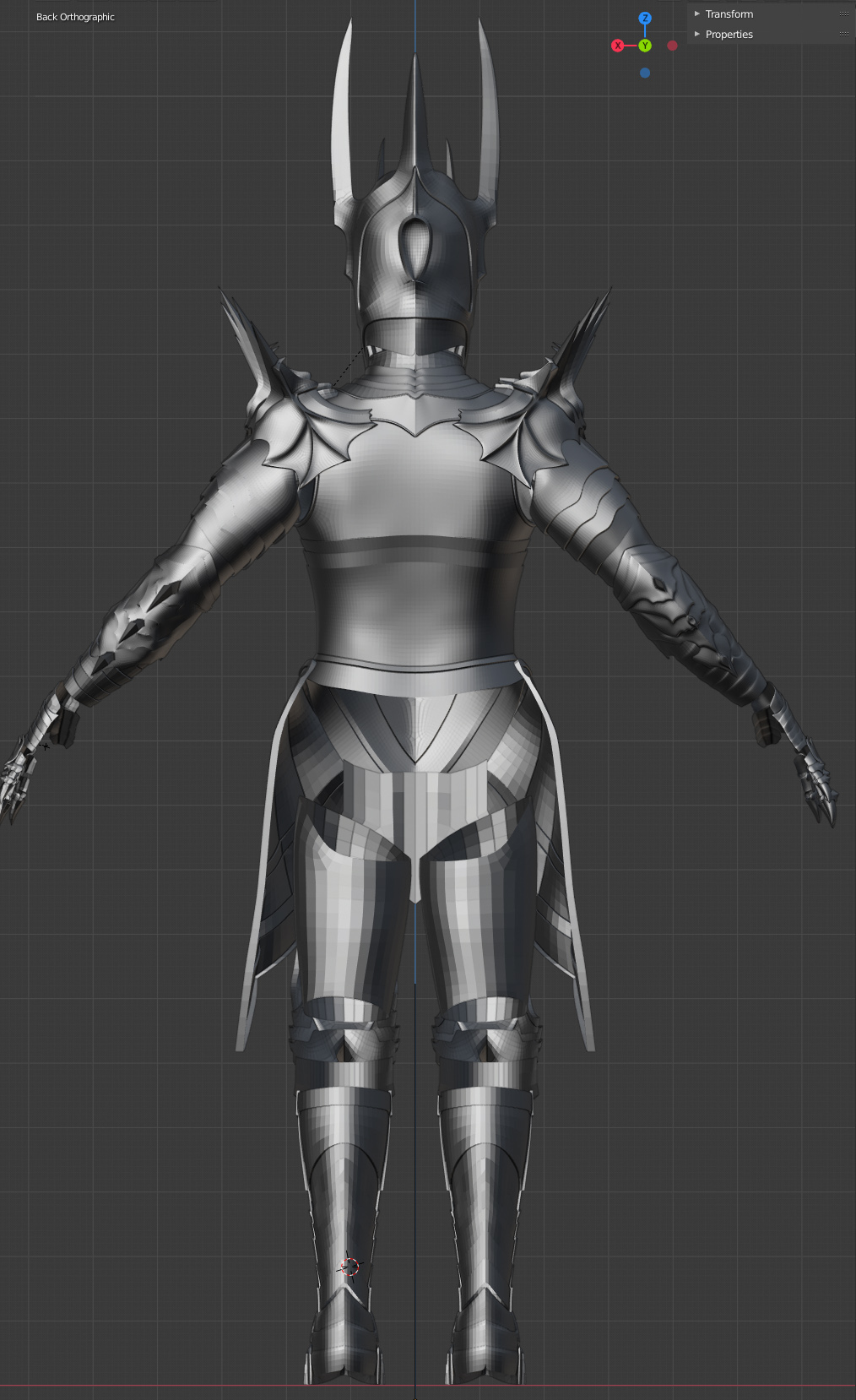 Some of the best references I've found are the large status that exists and from what I can tell, and they are pretty accurate, I have found only a few errors, but it gives you a lot of indication of what it looks like from many angles.

I've done a whole bunch of print for the gauntlets. Getting the fingers to move just right is a real challenge, but i think I have it mostly figured out. The fingers are easily some of the most challenging parts, since the margins are so thin.

Beyond just using photos, I have used photo scanning whenever I can. For the helmet, I've actually been able to do this from Youtube videos, with varying results. I can't get the entire helmet, and, they are hardly smooth but it still helps to improve the accuracy. I trust that United cutlery has got the basic shapes very accurate with better access to the source material. Here are the result of 2 different scans. I believe it's 2 different version of the helmet.

Since the first pass on the entire armor is done.

* Hope for helpful feedback
* Photo scanning and measuring myself to try to make sure it the armors will actually fit nicely on my body.
* Vectorizing pattern for the textures to be used on the armor.
* Modelling the entire inside of the armor
* Test printing thing to make sure joints and mechanics work.
* Cutting up the model various places, adding hinges and figuring out places where i can put leather straps etc so you can actually get into the armor.
* UV mapping all the armor
* Model the mace. (im not worried about this, its almost is own side project and can be finished quickly, since its so well documented.

Again, If anyone has photos from exhibits or other occasion where the actual armor has been on display this would be very useful. Especially the patterns that will be on the armor.

RPF PREMIUM MEMBER
Interested to see how this turns out! Very cool so far.

Worked on the mace this weekend. The base is done, but the details take forever to make. For the mace I'm doing all the details hand-modeled, instead doing an extruded texture, mostly because the surfaces are flat.

The details are from the United cutlery version, don't know if those details are correct, impossible to know, but they look fine, so I will go with those.

I did stumble upon a frame from behind the scenes, where the actual mace is clearly visible, and the movie version is clearly longer than the replica version. I know that some of the replicas are "actor size" and others are "actual size", and Sauron being much taller than normal people, these props are pretty big. So I guess when they made this prop the actual size just turned out too big, so they shortened it a bit. I have made the mace in the actual proportions, but will print it in normal person scale. 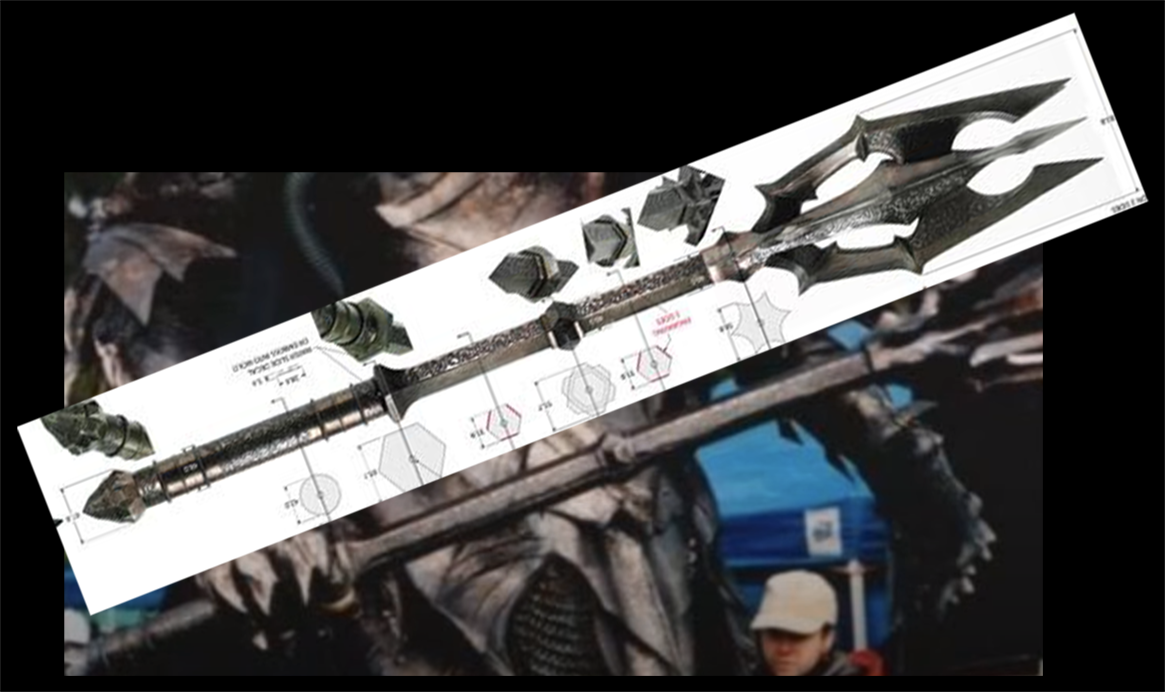 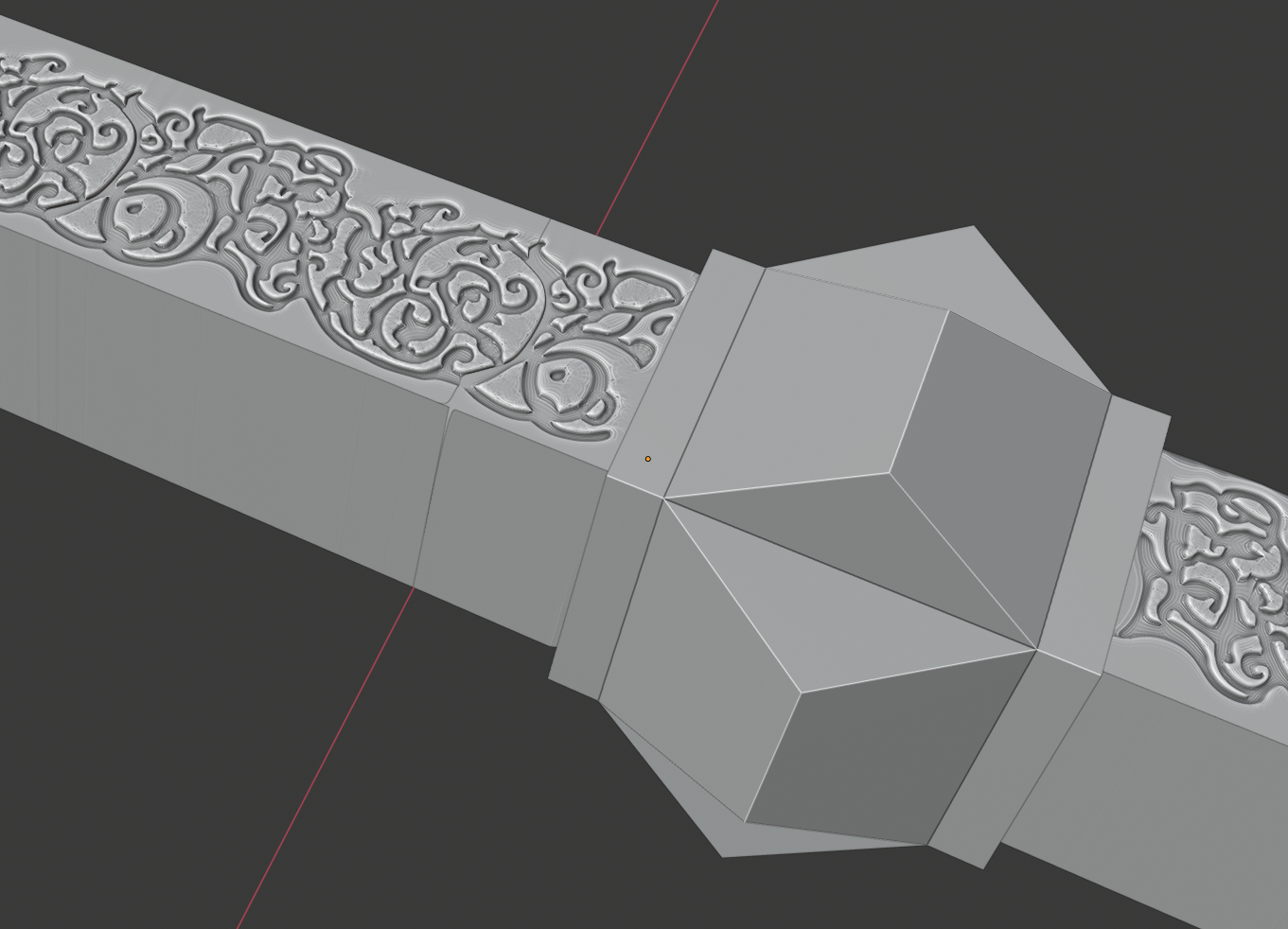 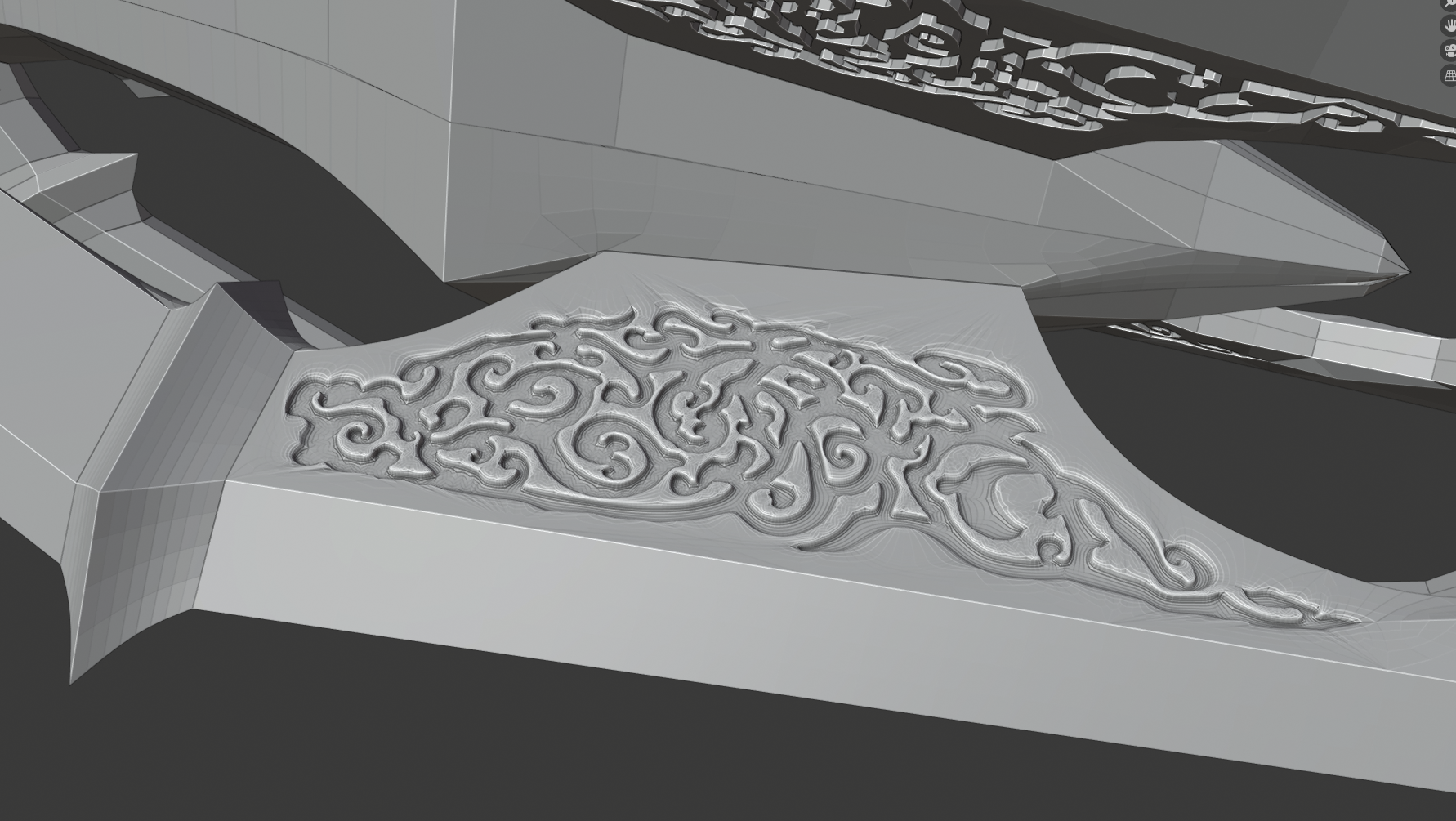 You are doing amazing job and looking forward to seeing your finished project! Here is some photos I have and hope they help.

WOW, those images are fantastic, those will help a lot.
Thank you!

And you can clearly see that the United Cutlery patterns are very accurate.
Last edited: May 18, 2020

Aerie said:
WOW, those images are fantastic, those will help a lot.
Thank you!

And you can clearly see that the United Cutlery patterns are very accurate.
Click to expand...

Yes they are, I have all 3 UC Sauron pieces (Helm, Mace, and gauntlet) if you need any additional pictures or measurements.

I will definitely take you up on that. What i would really need is the several shots from different angles of the decorations (the more straight the better) so then i can stitch those together and build that. Secondly would be to a shot of the gauntlet straight from above (to get backhand plats right). 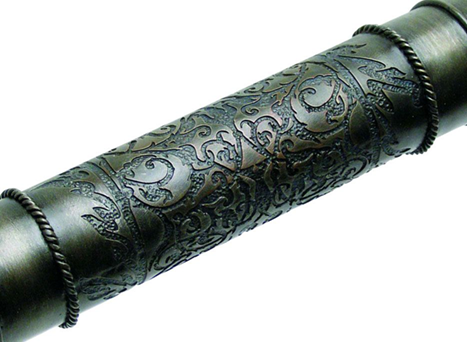 If your feeling really brave we could photo-scan the helmet properly, but that's a lot more effort. But its a great tool.

Is the software free to do the photo-scan? If so do you have a link? Maybe something I can try when I have some time.

Here is some mace photos, photos are numbered and go in order. Some of the gauntlet as well

Ohh man, this is going to be a fantastic build, looking forward for more of it

Perhaps this may be of use, even only as reference material:

Sauron Complete Armor Finished the Armor. ( Yeayyy) This is my first COSPLAY based model. so it is mainly created with Cosplay in mind. as some pieces ( like the hands and fingers Armor plates are separate) will glue on the glove chest plate, shoulder plates will need straps of some sort or...

And an old thread for reference:

Hey guys. I've decided to start a project I wanted since I was 12 years old. Full Sauron Armor. It'll be all free handed. So far I've made the helmet and the gauntlets. I'm already working on the templates for the vambraces. Here's the pictures I have so far.

Stivie said:
Is the software free to do the photo-scan? If so do you have a link? Maybe something I can try when I have some time.
Click to expand...

I use meshroom, which is free, and excellent. Its really easy to use. You take a bunch of pictures, drag and drop it in, press start and wait a while. Then you get the 3d object as a a .obj file.

AliceVision is a Photogrammetric Computer Vision framework for 3D Reconstruction and Camera Tracking.

Some tips:
Given the right pictures you can make it work with 6-10 images. I usually end up using about 60 or so, but have used as much as a 100. More will not help much, it just takes a lot longer to process. You want as many angles as possible, with some overlap between images.

I usually go 3 rounds around the object. Taking pictures from high angle, mid and from below.

You of course want the pictures to be as sharp, and high resolution as possible.

The most important thing to take photos with even light. So best result is always outside on a day with overcast clouds. Using a camera with fixed exposure settings. If you do it indoors, there is usually a window somewhere, which has lot of light, which gives the picture way different light. If there are now windows there is just too little light, unless you have studio.

You might think that having a neutral background would help, it does not, it hurts it a lot. The software uses the surrounding to help track the images. So the more stuff that is in the picture the better. Also, never ever rotate the model, always move the camera around the object. It can be made to work rotating the model, but rarely works out well.
Last edited: May 19, 2020

Awesome post thank you for sharing your tips and tricks

Modeled the small and large patterns for the handle. 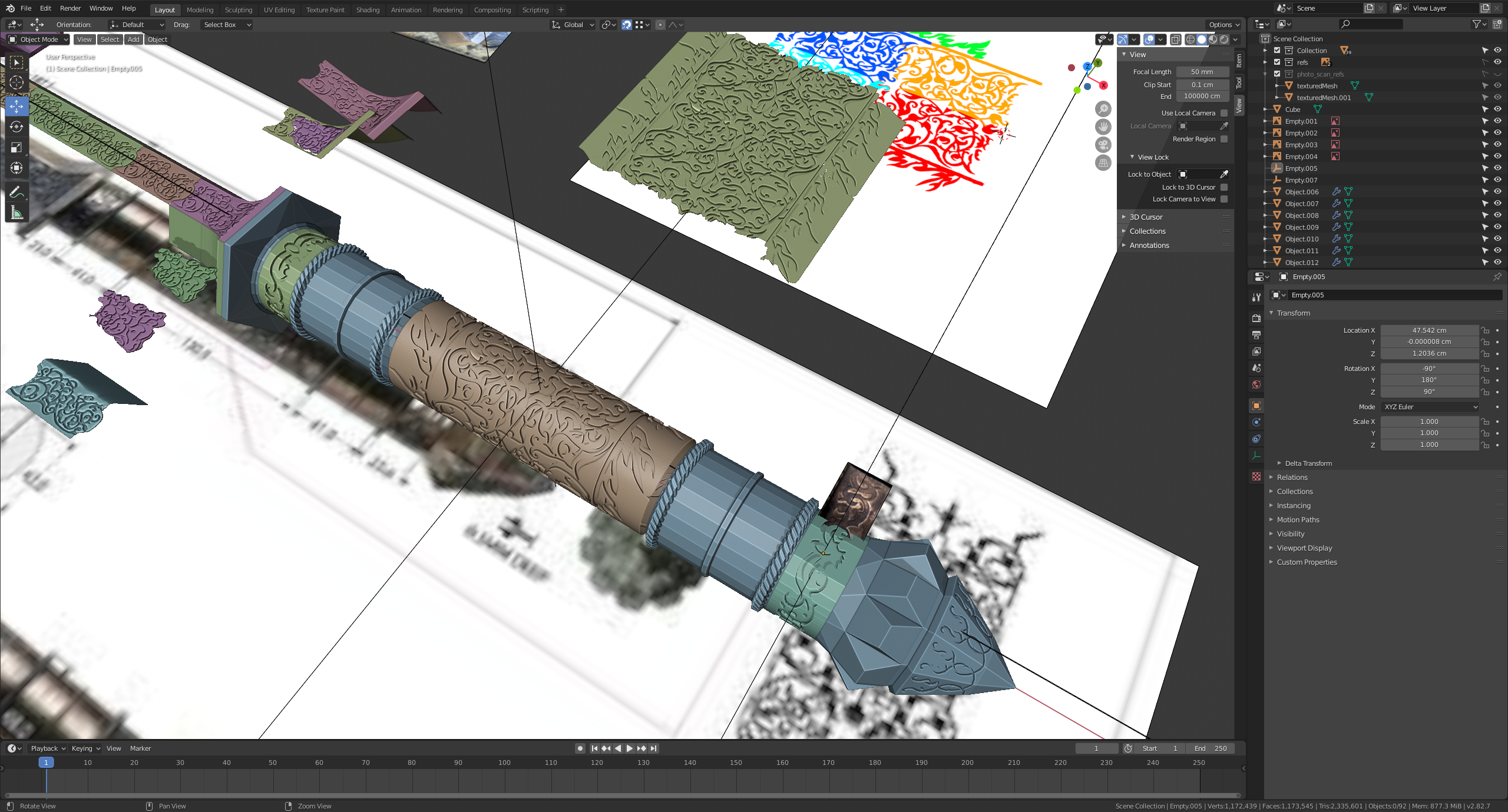 Wow, your an exceptional modeler. I'll try and get you some more helmet pics this weekend. Thank for the link and software hints as well!

Tried Meshroom and got an error, apparently I'm not brave enough.

Wow, thanks for trying to scan it. Even if it did not work, I will definitely be able to use some of this.

As for the photo scan, the reason it did not work was you missed this rule "never ever rotate the model, always move the camera around the object" The object must remain static in its environment. If you do try again, and i hope that you do it really cool when it works, do it outside, in shadow (not direct sunlight). Your photos were really good, the program just does not understand what to do, when the room is standing still and the object in the middle is rotating.
Last edited: May 21, 2020

Done with all the details on the mace, and its all integrated into a single mesh. 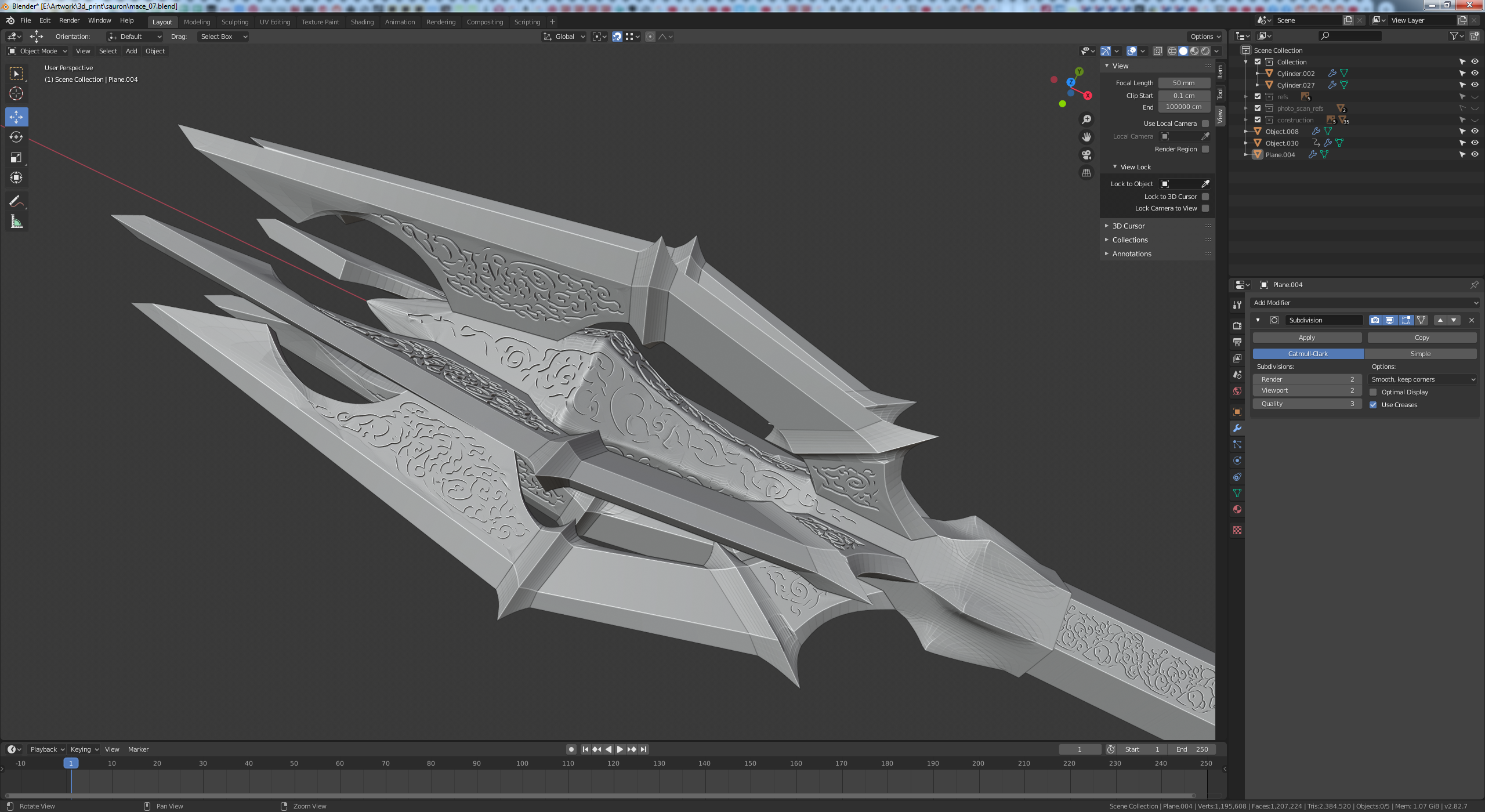 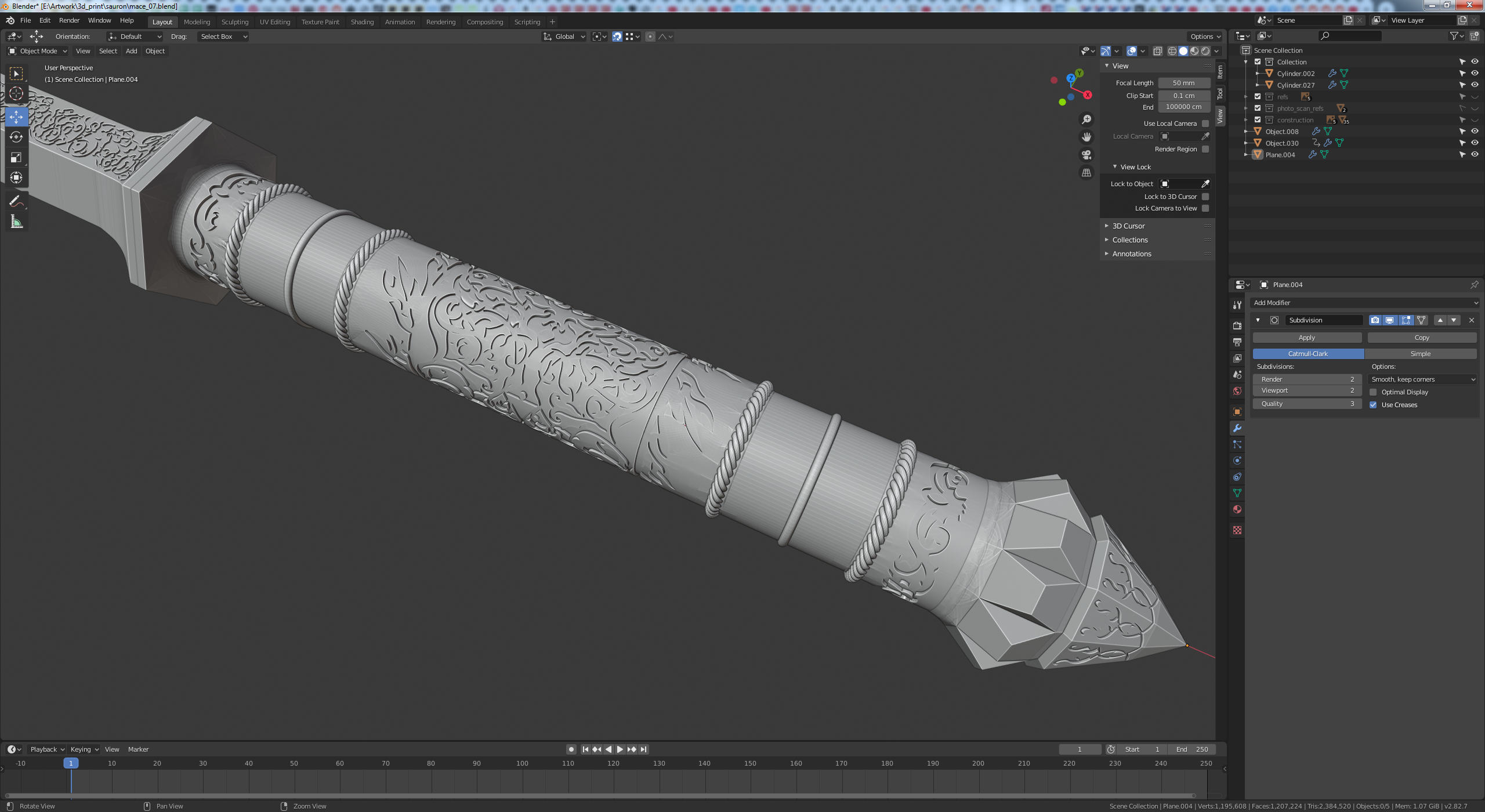 I've now done all work to prep the mace for print, which always takes a lot more time than you think, even when your think you are completely done there is so much to consider in manufacturing.

I've also done some test prints and mock-up's for size. 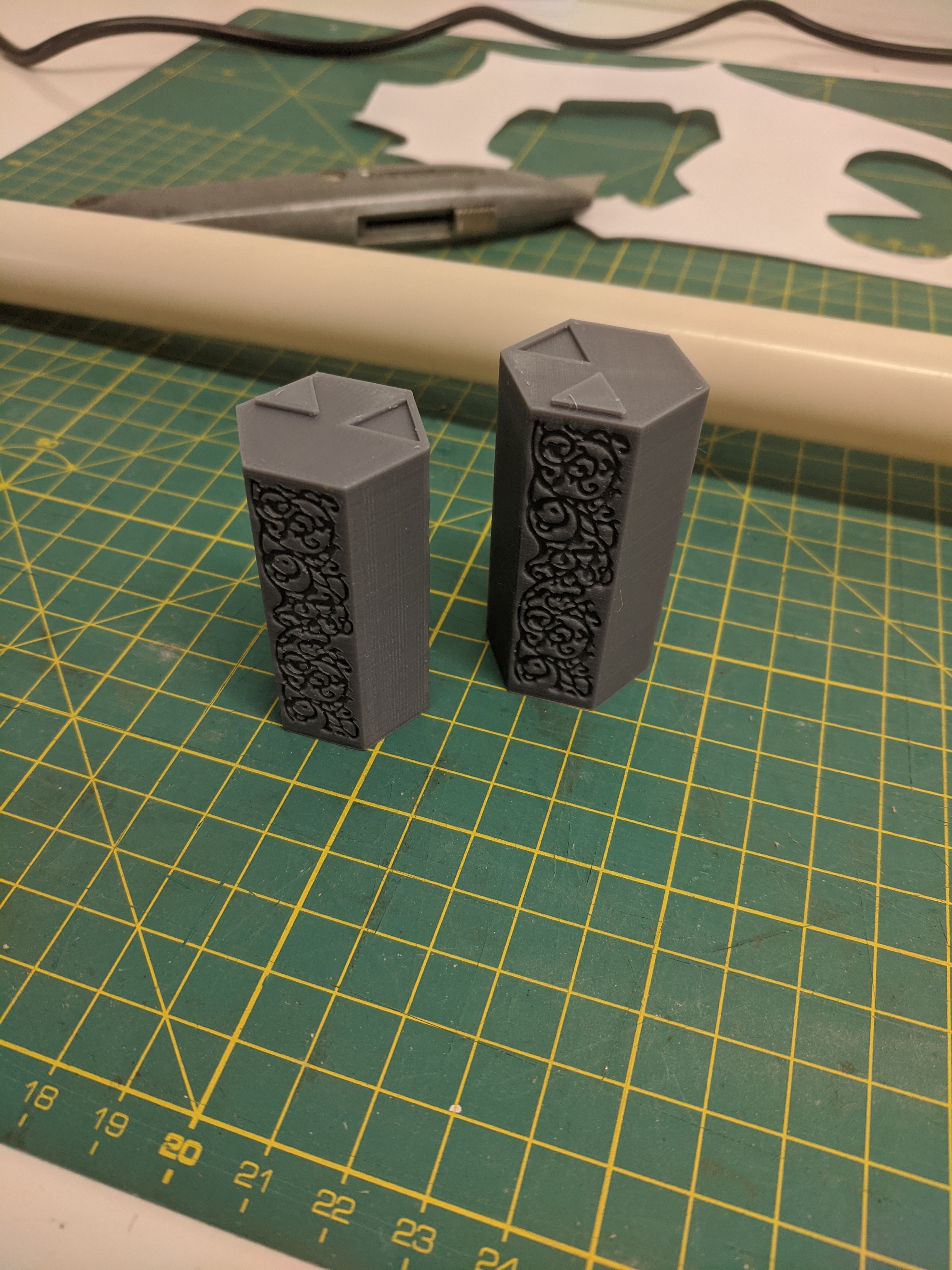 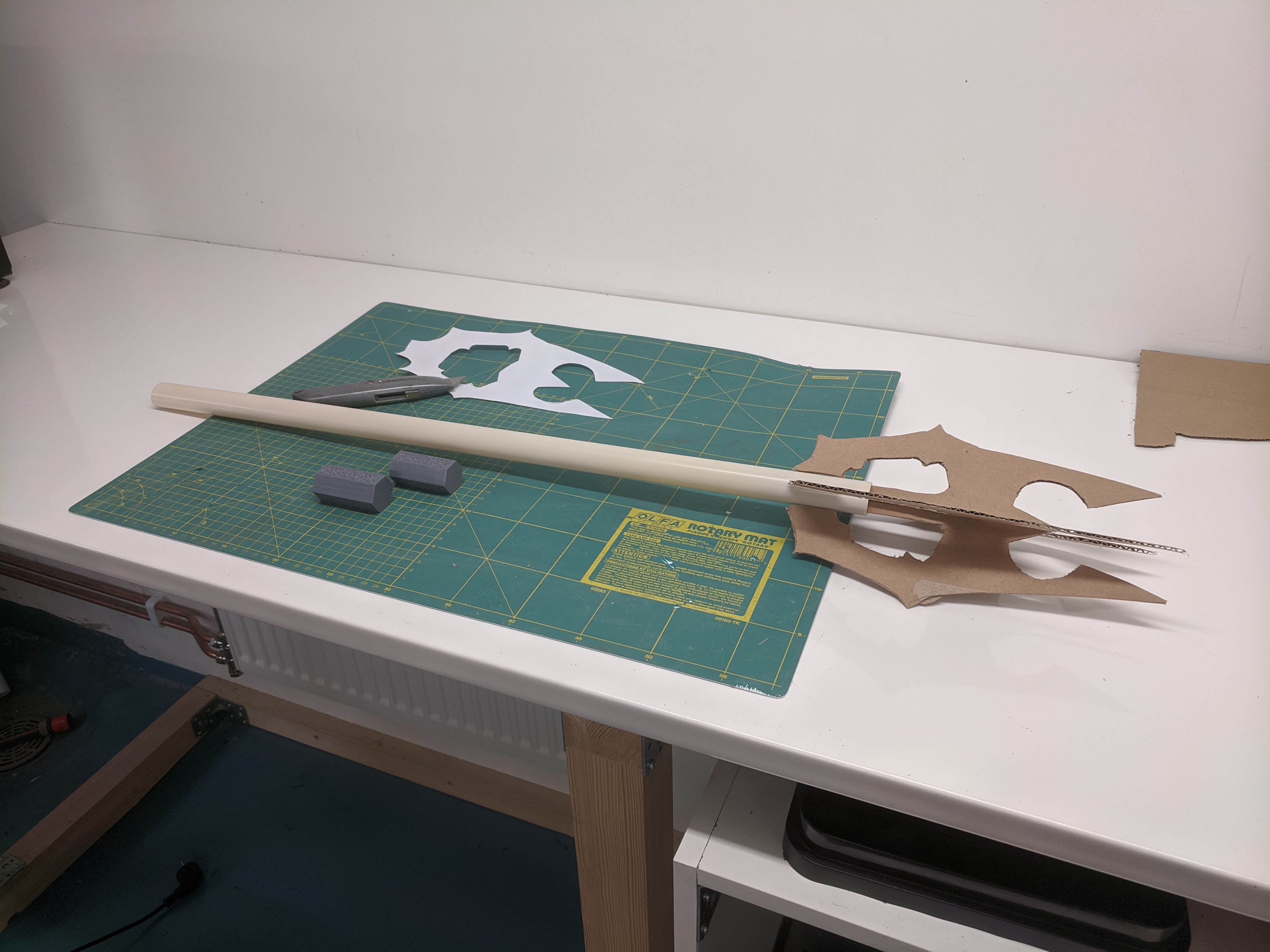 Will do a test print off the entire thing. With lower quality and basically hollow. This will take a bit more than 3 days. It's worth doing a test since there are always any number of thing i might want to change. Length, thickness, depth of pattern etc. I don't think i could nail everything on the first attempt.

The final version will take almost 6 days and will be solid, but with a rod inside for stability. Will also save on material. 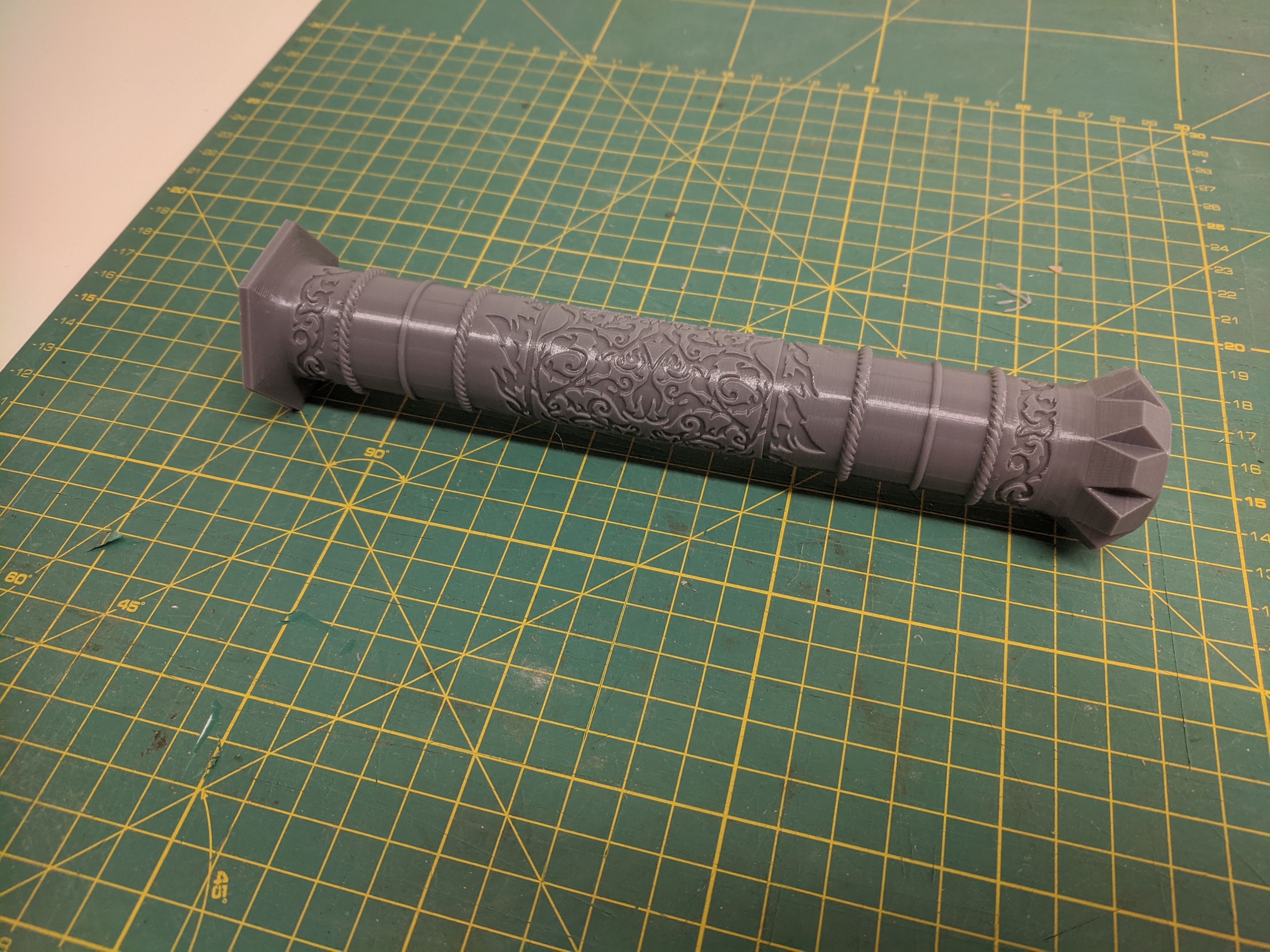 Awesome job! Are you using an SLA printer?