RPF PREMIUM MEMBER
Yeah, so I was learning "Ride of the Valkyries" on trombone and thought, what the hey. The thread title is what I posted into the search engines because that's exactly what I wanted; the totally a-historical cartoon horned helmet.

(Which actually has a specific origin in, in fact, the staging of a Wagner opera but let's not get carried away with research here.)

The other part of the build was to try to do it without breaking quarantine. To as much as possible make use of what I had laying about the shop. So it was a learning project, in other words. 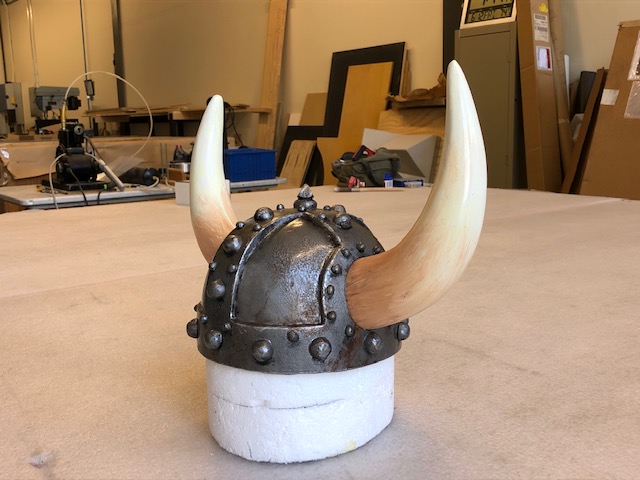 So here's the experiments:

There's a hundred ways to build a helmet. The first thing I tried was EVA foam. Except I didn't have any. Had some pink foam, 1" thick. Was able to edge-glue it with barge cement and make a sort of helmet shape but that was not really working out for me. I wanted cheap and silly but that was too cheap and silly.

But now I had a nasty pink thing that fit my head. So I transferred that to white expanded foam and made a primitive wig block.

Wrapped the wig block in cling-wrap (I had access to the shipping department so things like four foot wide rolls of cling film are totally fair for this project.) And then did up the basic shell in glue-muslin.

That's an old theatre technology. Actually, we use glue-muslin to protect things carved from, well, expanded foam. The real thing to use to make a hard shell would be celastic. You know, the bandage substitute thing that you dip in acetone. Oh, and plaster bandages work. And so does fiberglass matting -- but I didn't have any of these. I didn't even have white PVA, which is the go-to for soaking your muslin strips.

If you've never done it, you hand-tear the strips so they don't have visible edges. Forgot to mention the other big use of them in theatre is to hide the gaps between soft-cover flats. Anyhow, yellow carpenter's glue cut with water worked -- it just took ages to dry. I finally stuck the helmet in front of a floor heater and rotated it every couple of hours over a day or two.

Then the decoration. I just happened to have a bunch of scraps of that thin, dense carpet we used to call ozite. So cut some strips of that and soaked that in the same glue and put them hard-surface out. And then waited another couple days for THAT to dry.

So I wanted to build up a nice textured surface with something like spackle putty but the only stuff I had was that soft white crumbly stuff that barely holds up to a paint roller going over it. And when I pulled the muslin shell off the wig block, it was way too flexible to be comfortable working with. So what can I use to smooth out the criss-crossing fabric and give it some stiffness? Why, the old friend and standby, Bondo.

Which was nearly dried out and was impossible to smooth and for a while I wasn't sure it was going to set up at all. Well, at least THAT old can is empty now and can be thrown out.

So the smoothing and the hiding of gaps was, finally, wood putty. I'm sorry I didn't get any pictures, but ninety percent of them would have been struggling to sand the chunks of old manky Bondo and wondering if it would have been better to smooth FIRST, then do the strapping SECOND.

But finally was there. So time to show off a little. Instead of going to the hardware store for something appropriate for all the studs or whatever those things are, I carved a dowel to the right shape and set about making a mold from...something...around the shop. Hot glue did not pan out. Sikaflex was an interesting experience. It was too stiff to do anything with, when I tried acetone to reduce the viscocity it ate the container and acetone and Sikaflex went all over the workbench, and did I mention the stuff is starkly black and really, really, really sticky?

Finally found one dusty tube of silicone bathtub caulk and although it was completely clogged, once I'd sliced the tube open there was just enough to fill a pot with and make my mold. Yeah, eventually I broke down and used up the last of my Rebound making a new mold, but I ended up mostly using the pulls from the bathtub caulk one.

The actual casts? Why, that would be Durham's Rock Hard Water Putty. Since it sets up within an hour, I could run the things off one after another through the day while I was doing other tasks.

The horns I carved from white expanded foam. What else. I didn't bother with elaborate templates or otherwise getting other than a rough visual match. The white expanded foam (some people call it bead board) is coarse in texture. You can get down to 120 grit sandpaper in shaping the stuff but it will only take so much.

The plan was to fill and smooth with alternating coats of spackle and white glue and then glass them for strength.

Did I mention I didn't have a good spackle or a white PVA? Plus I was concerned that the glue layers might separate. So instead I used wood putty. The usual technique for stuff like this is to get the surface about as good as you can then spray with filler primer to give you a uniform appearance and help you see better what still needs to be fixed.

What needed to be fixed is the wood putty didn't isolate the expanded foam sufficiently and the spray started to eat it.

So I needed to glass it right away and try to protect it. I'd verified previously that the industrial resin mix I just so happened to have in the shop (this is what you get when you borrow the company shop for a prop project) didn't eat foam. It also flows far too well and sets up far too slow. So I hit the books and you can thicken it with a dozen things I didn't have, and two I sort of did.

Barley flour didn't work well. (Why do I have barley flour? Because you use it to make a classical ceremonial drink described by Homer.) An acceptable plaster-of-paris substitute was -- you guessed it -- more of the Durham's Rock Hard. As a bonus, it also tinted the stuff so you could tell where you'd put it.

The stuff still dripped far too well and it took two coats but at last I had a firm working surface I could smooth. You know the routine. Smaller and smaller dabs of putty until you are down to the Bondo Spot Putty for the tiny remaining holes.

Which got bigger and bigger.

Oops. Bondo spot putty DOES eat expanded foam. It worked very slowly, but left overnight I'd find a giant void eaten into the foam below the resin shell. So. Back to the Durham's. I mixed up a bunch of the stuff and poured it into the holes. Then used nothing but that until I was sure I had everything covered. Then back to wood putty. No more Bondo ANYTHING on this project.

At last the smoothing is done so I lathered on white house paint. Then painted up the details with a starter set of Windsor-Newton acrylics I've had since college. Or maybe high school. And at this point it should be spray-safe, right? Nope. But there were only a couple of tiny pits before I went to my other regular savior; Blair Spray Fixative, which goes over everything -- seriously, I've never had it react to anything. It also isolates like a champ.

So several coats of Krylon crystal-Klear gloss (or is is Krystal-clear? Dammit, Krylon). And set those aside.

Broke the unsaid rules of the project and ordered hammered finish pewter because the closest thing I had was shiny silver and that wasn't going to work. And dabbed at it with the Windsor-Newtons (I've never gotten a satisfactory black wash, though. The closest on this was to mix with dish soap as a surfacent, dab it into the cracks with a brush then spray with water to try to soften the effect.)

Then Blair Spray Fix to take down the gloss a bit. (Really, Krylon? You are putting gloss on a metallic finish?)

I hadn't given a single thought to how the horns attached so, given their fragility and my previous indiscretions with Rebound 25 and so forth I mixed up a bit of Apoxie Sculpt to secure them firmly into their holes.

Thus -- and taking far too long in the process -- I have learned so many, many things.

Except "Ride of the Valkyries." Seriously, my trombone lip just isn't up to snuff yet.

My take on the Keymaster helmet from Ghostbusters