So, I decided to make a Nerf version of the Aliens pulse rifle...I looked at a few different Nerf guns to use as a base, and the Stampede stood out from the start, as it was a full-auto gun. Once I got down to it though, the dimensions just weren't right, and I went a different route.

In the end, I used a Nerf Recon for the body, Longshot Front Gun for the front/grenade launcher, and the Raider's sliding stock. My plan was to make the entire gun portion out of Nerf and then scratch build the rest out of styrene...

So, here she is, from start to completion

^started with the 2 Nerfs

^styrene mostly done. For the clip, I used a cut-down 18 dart Nerf clip, then reglued it bck together to hold 12 darts. 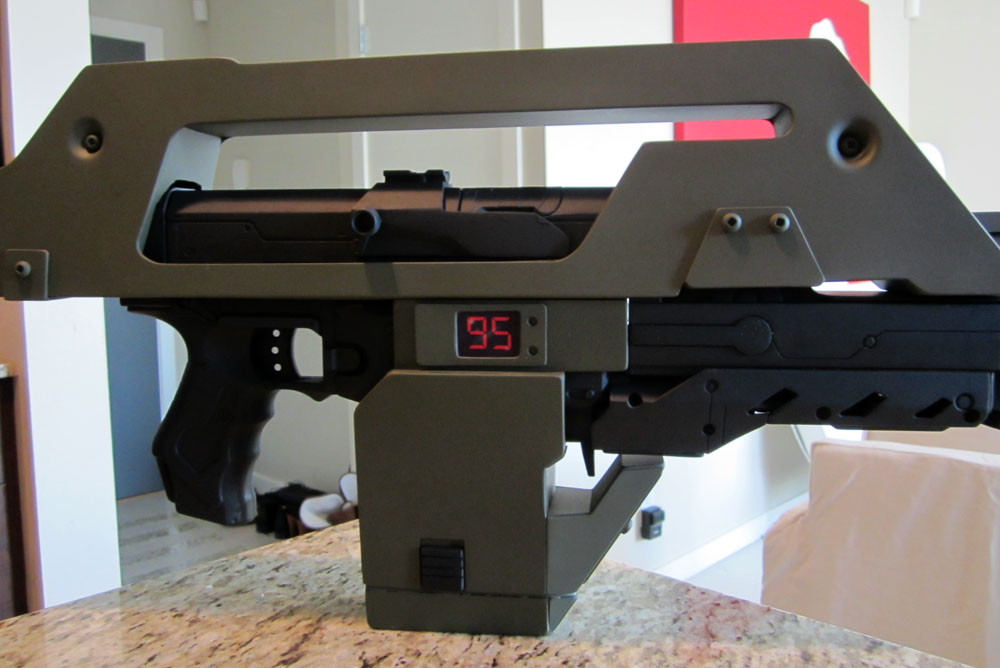 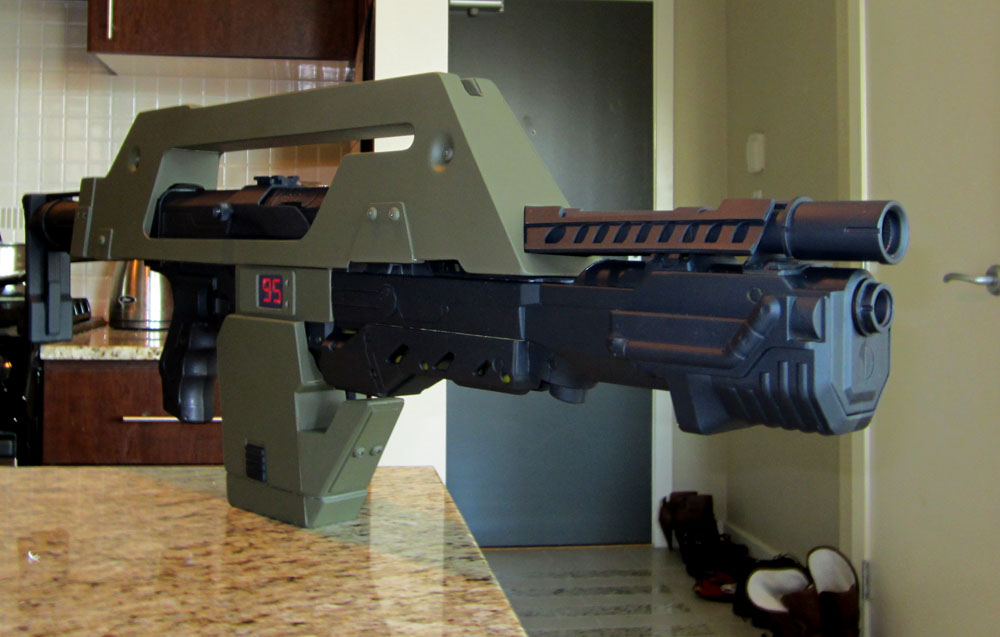 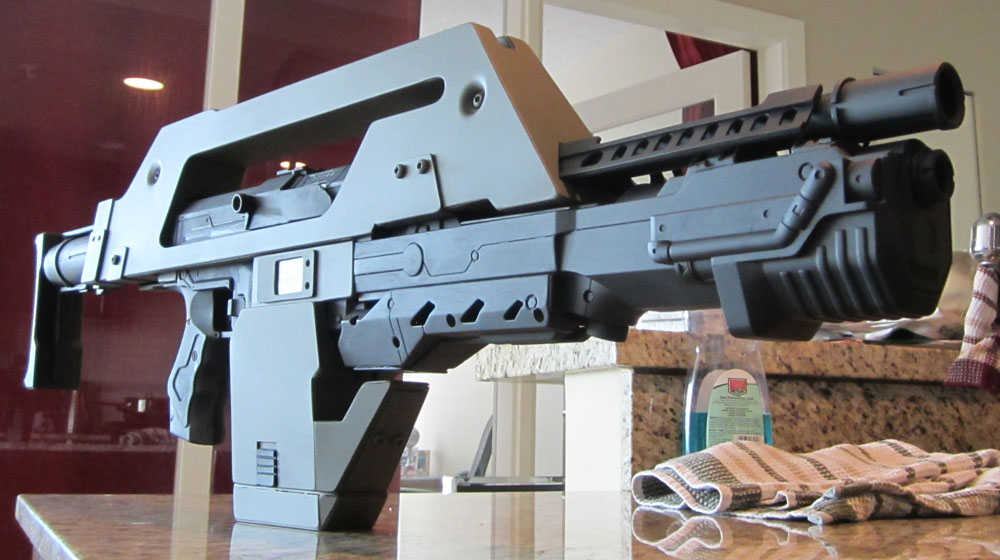 ^and a couple artsier shots to end it 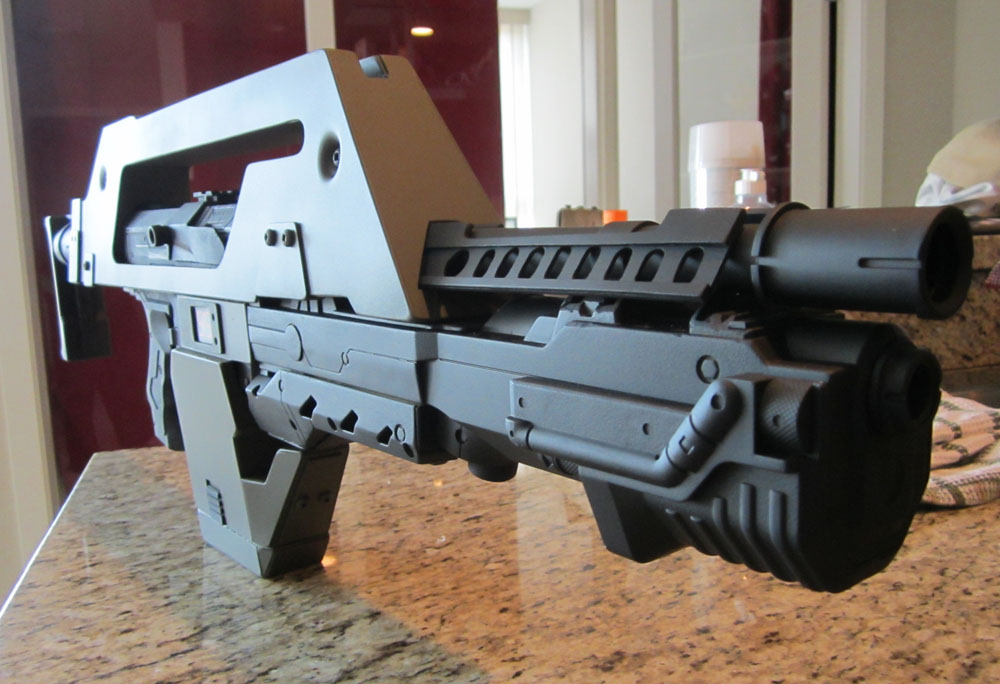 Still need to cut off the ends of a few screws to get em in the holes without blocking the clip or stock from sliding, but other than that she's done.

Super happy with the way it turned out. It's very sturdy, and pretty hefty too, since I filled a lot of the innards with loads of hot glue to add some strength and weight.

Update: *** here's the templates for anyone else that wants to make one http://mobiusdesigns.com/nerf/Nerf_pulse_rifle.rar ***
Last edited: Jun 28, 2012

Wow very nice, I love it. I have an Icons Pulse Rifle and I don't know how many times I've picked it up and wished I could shoot Nerf darts out of it!

How long did the project take?

That's awesome and i think i'll keep an eye out for these nerf guns on sale.

Bish - it was probably 2 days of planning, 2 or 3 days of fiddling and styrene work, and 1 day to prep and paint. I could have done it quicker, but I've never really worked with styrene or done any modelling like this before, so it was a lot of double-checking and waffling before I made any cuts.

Wes: if you're looking for guns, craigslist is the way to go. These Nerf guns pop up all the time for really cheap (I got the raider and longshot for $25 total).

That's awesome!!! I have the Stampede and always thought it reminded me of a Pulse Rifle!

For never having used styrene before, you did some really impressive work with it!! I'd love to see some shroud building pics if you took any.

This is very much what I would picture as a "seburo" pulse rifle. The nerf gun design aesthetic lends itself to seburo guns anyway, but when you chop them up and make those kinds of lines, I really like it.

unfortunately, no building shots that show anything different than the current pics...I have a few with the gun painted black and the shroud still in white, but that's about it. I would always pull out the camera at the end of the day, so missed all the progress shots.

and yea, Nerf definitely fits in the Seburo style...the new Rayven especially. I was going to make the grenade launcher more screen accurate at first, but once i glued the logshot part to the bottom, I liked it too much

Gone but not forgotten.
Now that's what a real world PR would probably look like! Great job.
M

Sweet,i may have to give this a try sometime...Nice work

That is simply jawdropping! Wow!

The pump handle is there, if you look at the rifle before being painted, it's gray on yellow. Notice how it's forward in one shot, back in another.

It may not be screen accurate but it is badass cool.
G

WOW, that's a mighty impressive mash-up! If that's your first time working with styrene you might want to start thinking of your second and third projects because your a dab hand at it. You managed to blend the the parts together very naturally and best of all everything still works. All you need is some loops and one of Noble's PR slings to help seal the deal.

I do have to ask if the shroud makes it difficult to cock the recon?

Once again, Bravo on a fantastic conversion.

That is a sweet piece of eye candy, and I am sure that others will follow your lead and this will become a standard RPF build comparable to Luke's light sabre