Anyone have any info on Max's Jeep. Year? Model? Mods? 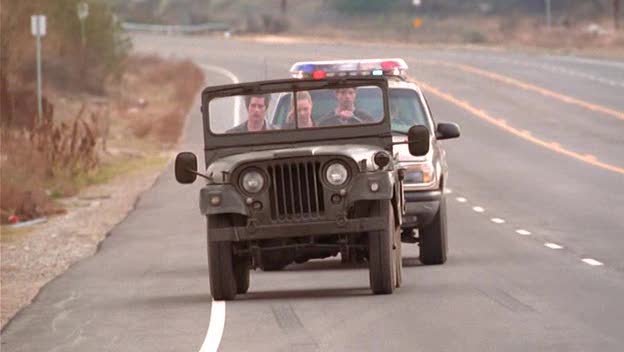 as for mods dont remember any sorry def not a jeep wrangler as some people suggest :rolleyes

standard front arches/fenders removed. added plastic\fiberglass arch parts with reflectors/side lights in the front of them? different mirrors too
*note this is the wrong moddel noticed max's has other type of folding front screen

this seems to be right one

It might be a later model jeep with a fiberglass kit to make it look vintage. ( there are many availble) Production crews often do that because a newer vehicle is more reliable. There are many things in the posted screencap (mirrors, lights, etc.) That look out of place on a vintage jeep.
L

I read somewhere (awhile back on some Roswell fan site) that the vehicle used was a 1952 JEEP M-38A1 (MD). The pics below even matches the two-piece windshield of Max's Jeep.

they may have used a fibreglass shell or one of the kit cars, but following the plot line of the series, it is based in roswell new mexico, about aliens, and obviously close to groom lake, it is pretty much assumed from the series that it is an ex military vehicle from the base, as for the modded parts, could just be because Max was in his early 20's, alien, adopted family not much money, and in the show they went to a scrap/junk yard to get parts for a vento so maybe he needed parts to fix up his jeep and pulled off anything that looks right to bolt on lol anyway check out the Jago Jeep kit car if ur in uk its a good base second hand. it is based on mk2 ford escort running gear tho. cheeper than the jeep wrangler as a start

I hear ya, the only diff is that the '52 has the split windows and didn't have the right-side headlight single bar compared to the '53. But the model you posted was spot on.
Last edited: Aug 27, 2011

must have been tired last night cos i didnt notice my pic didnt have split screen lol. i enjoyed the series was interesting and a bit diff
K

Thanks all. I didn't know about he Jago's. They're interesting but I'll have to look around as I'm in the U.S.

How hard is it to find parts for the 52' authentic jeep? This would be a first car for my son (we really dig the show). His brother has a 1967 impala that we are tricking out to look like the car from Supernatural so I don't mind some work if parts are around.