Let's Discuss D-Rings and What We've All Got

RPF PREMIUM MEMBER
As I've been going through my various builds, I've been combing the varied threads on here looking for all the minor details about components. I've often discovered that the information is hard to follow and so spread out as to hard to understood. I wanted to to start a discussion on d-rings as I think I've made a good discovery while also ruling things out.

Let's start with. what I think is a fairly easy search for others to use to find a nice supply of d-rings for a Vader build.

Based on the genesis of variosu sabers in the series, it makes the most sense that looking towards camera gear is a solid step. Past posts have found suitable d-rings on old Graflex cases.

With that in mind, I figured it was worthwhile to look at vintage camera bags. My searches kept coming back to a bag in particular and what I liked about it was it's generally cheap. In abundance. And the d-rings look very good in particular for Obi and Vader builds. 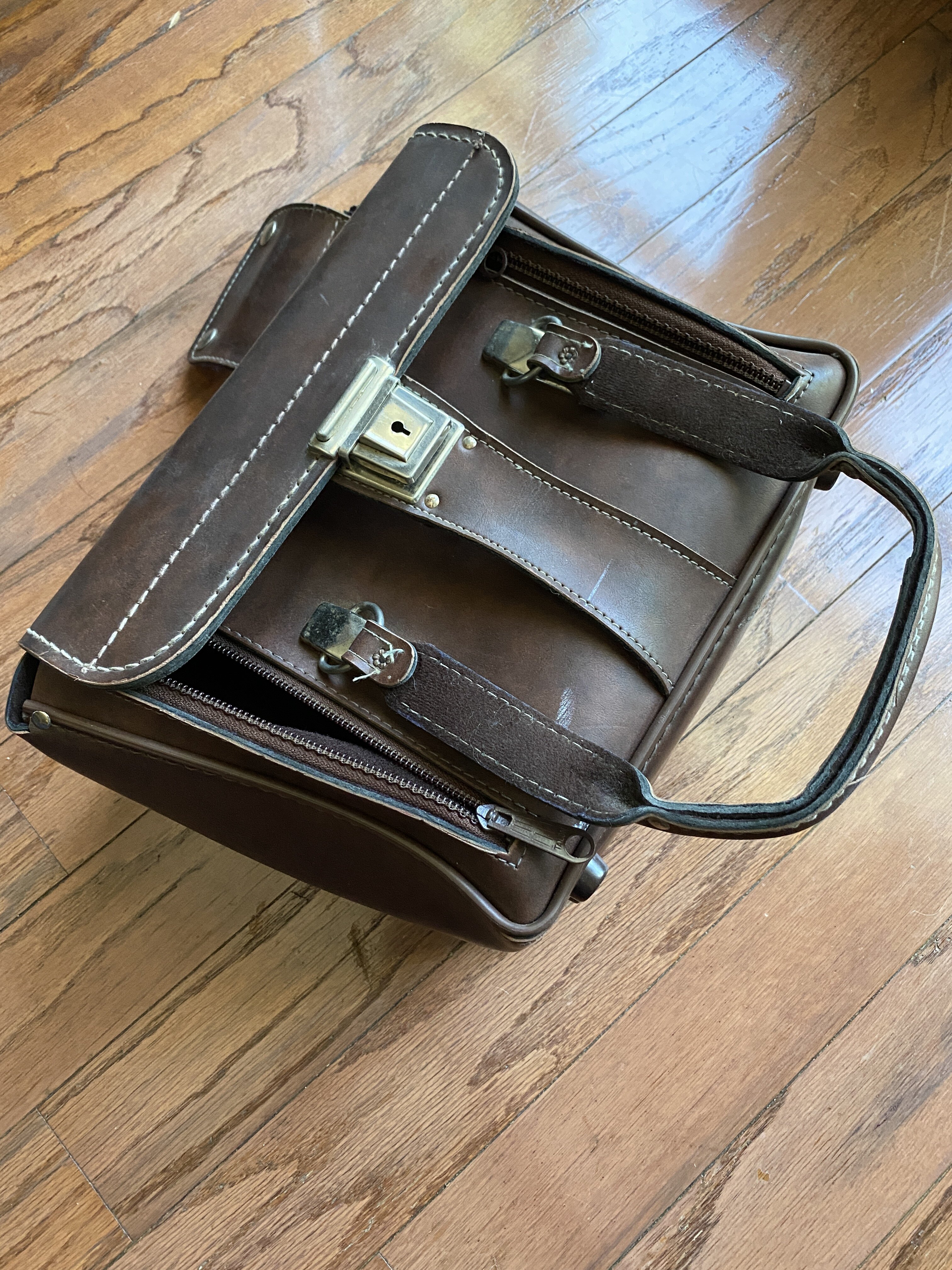 Here's the listing on eBay where I bought it: 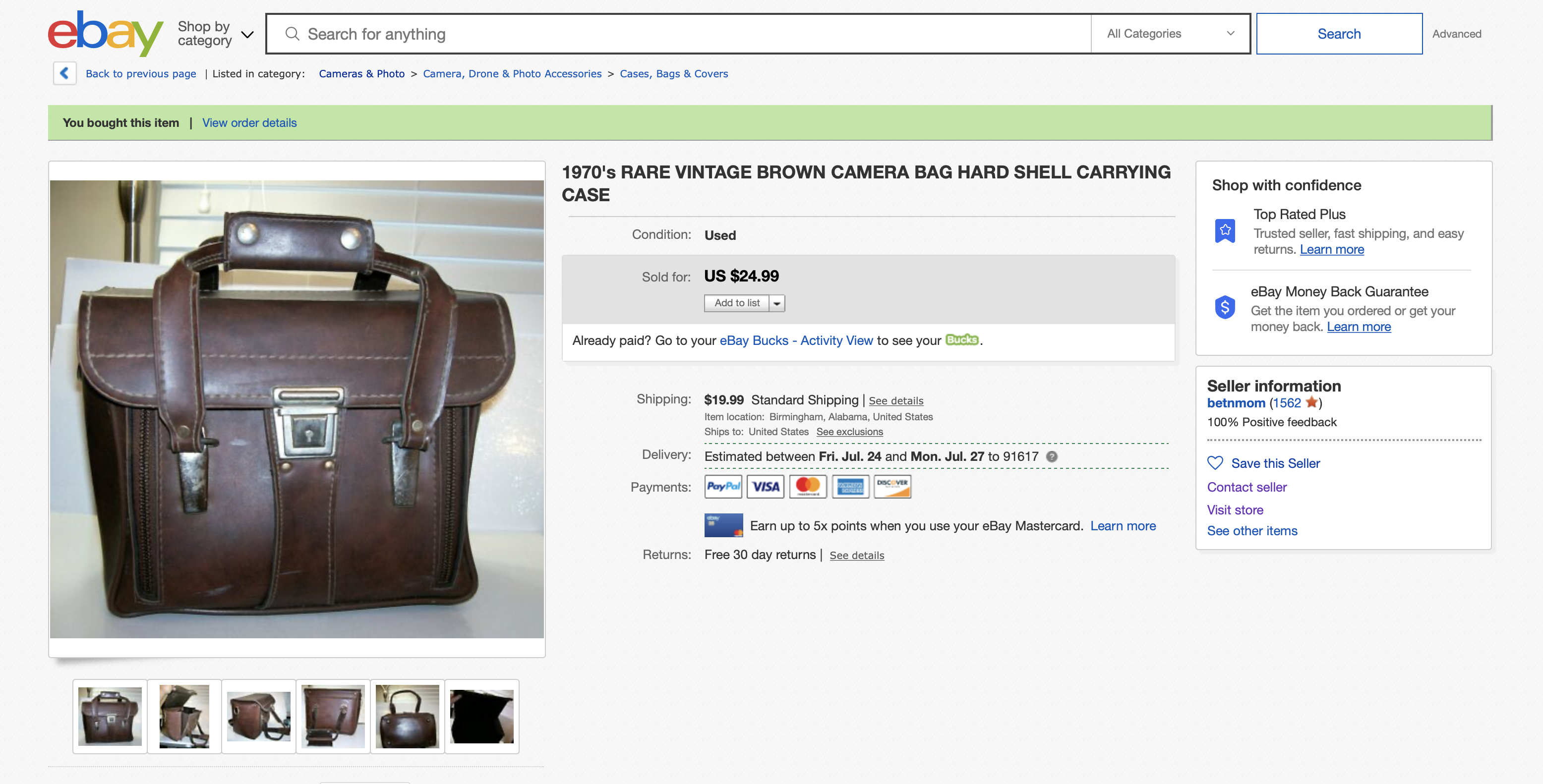 And if you look for this style of bag, you'll find quite a few listed at or around this price point. I used a basic search term, like Vintage Camera Bag (Case)

Even better was I harvested 6 d-rings off of it: 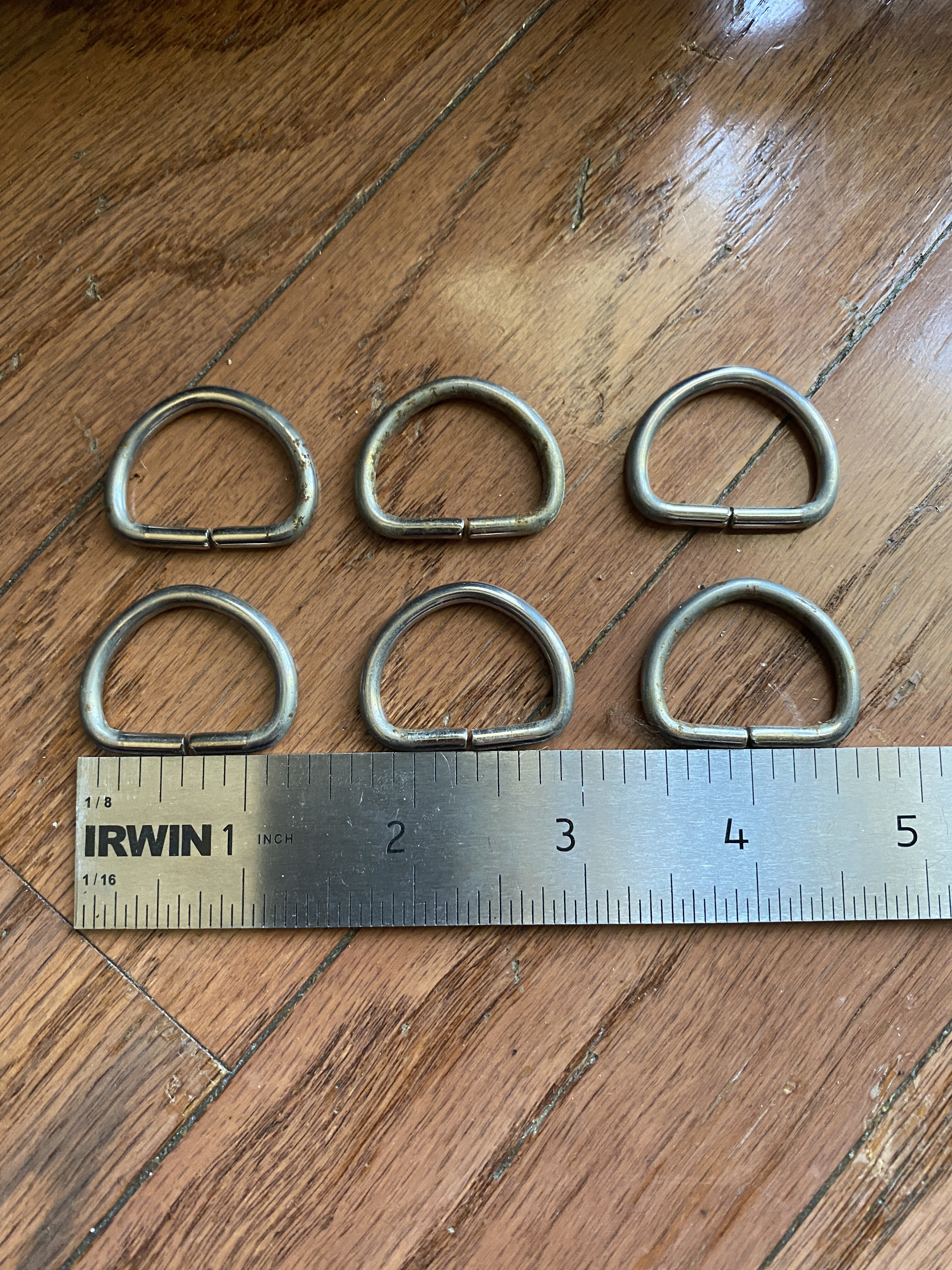 These d-rings have a nice point to them and the size seems good.

So, I'd say this is a solid find for our needs.

I'll be posting more info as I go. My builds thread has a solid rundown on my trials and tribulations so far as well and I may just transfer those posts here too to keep the info consolidated. Hopefully some of you ahve more to add to thisand can post your finds in here. Thanks for participating!

Because I'm on a bit of hold while pieces come in and slowly and proceed with a slowed down t-track install I figured it was worth posting some of my findings in regards to vintage d-rings.

These are the bits and bobs I picked up recently. 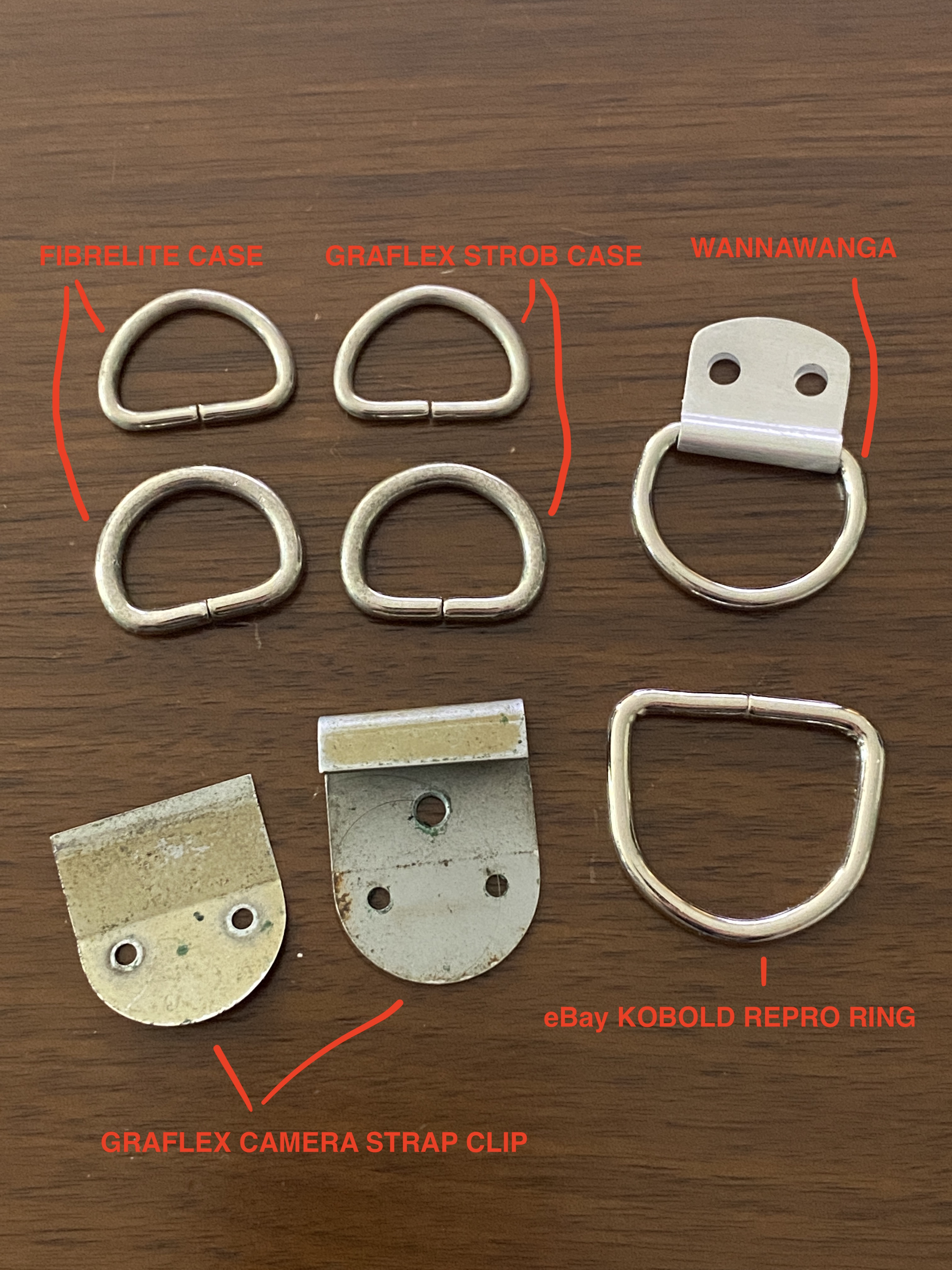 These are all in pursuit of vintage parts for my ANH Luke build. My first purchase after some searching led me to the Fibrelite cases. I saw images of that brand (but not named) in other threads during my research. And while the blue cases were mentioned I saw no follow-up about if they actually were the ones. Fibrelite cases are generally used to carry photo equipment so that tracks with the overall photography gear theme in which lightsabers have their origin. It wouldn't be surprsing if that's where the d-rings came from (and other posts on here have searched that out). So I ended up finding a cheap-ish case and ordered it which I posted earlier in this thread.

These are those rings (2 on one case) removed and compared to the Wannawanga repro parts: 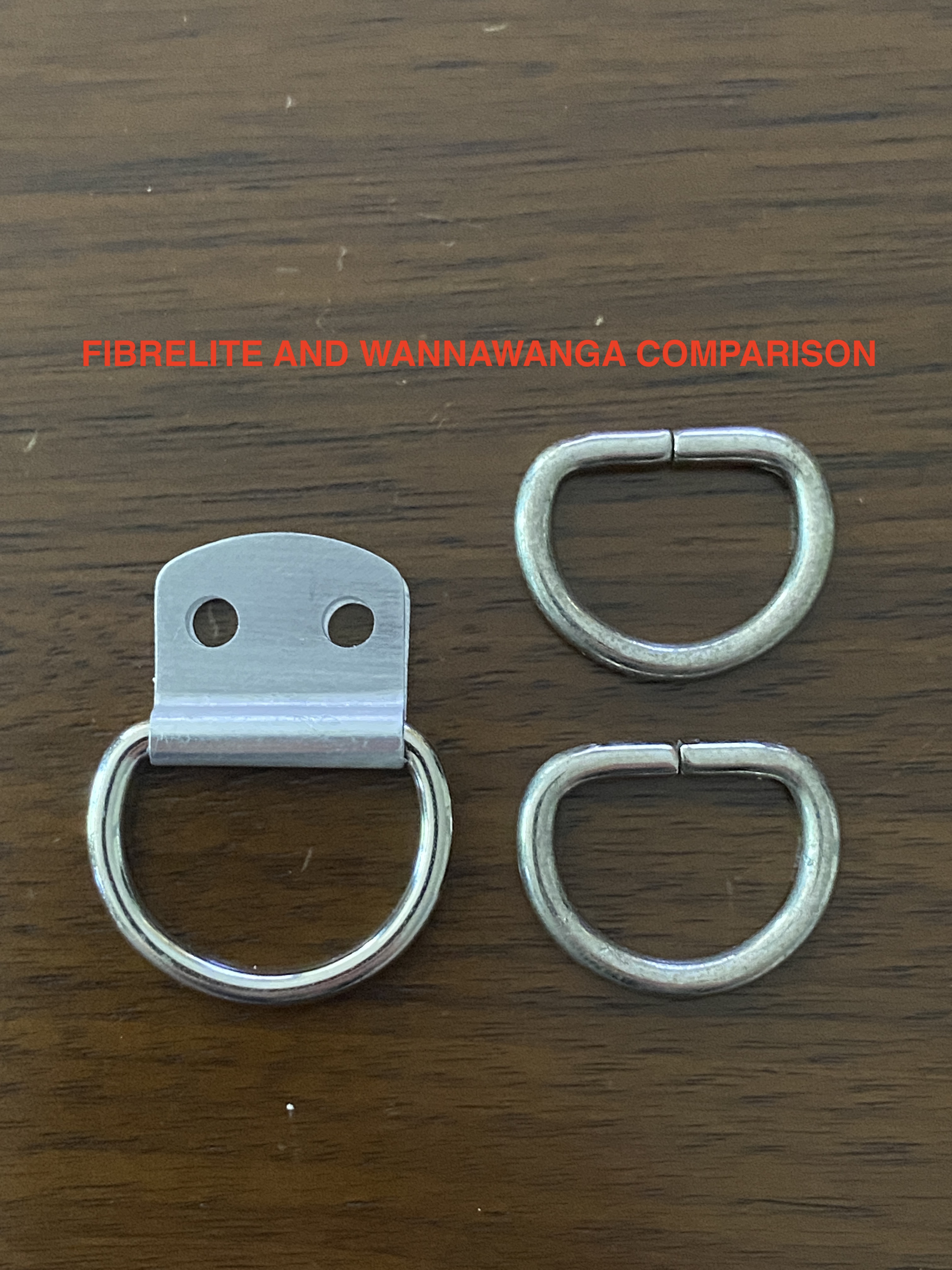 Similar profile but a bit too small based on the most recent Elstree discovery which informed Roy on his updated d-ring he offers. Also, getting Roy's version was very helpful in the search as it gives a baseline to go off of.

The next d-rings I found came off of a Graflex Strob case. Here's an example of that case and the d-ring is slightly visible on the right side of it. 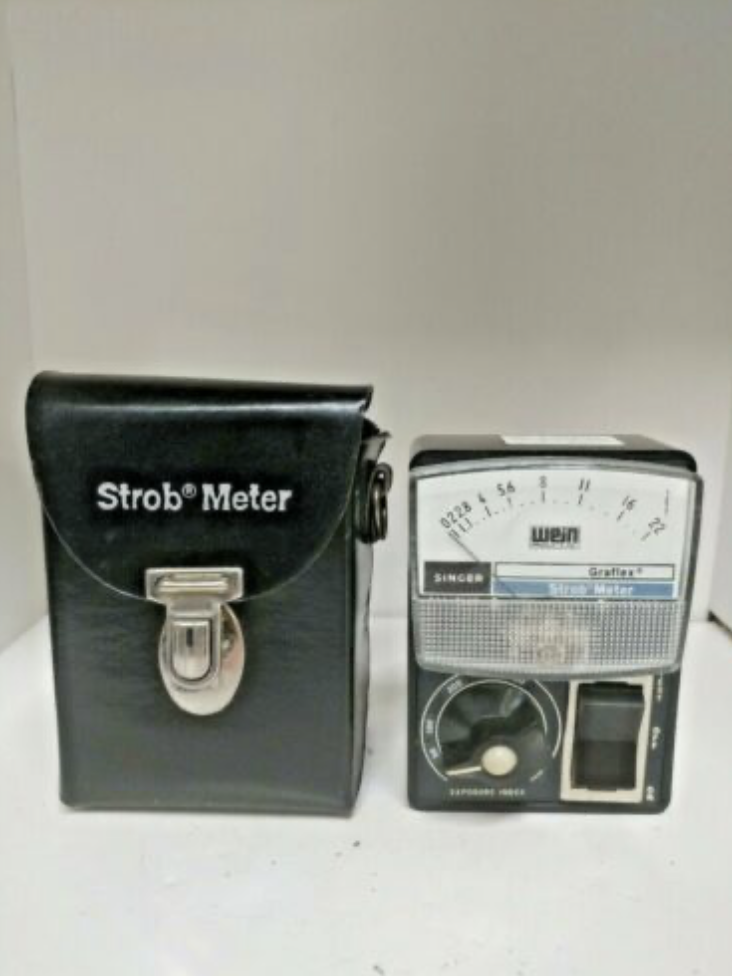 And here they are in comparison to the Wannawanga repro: 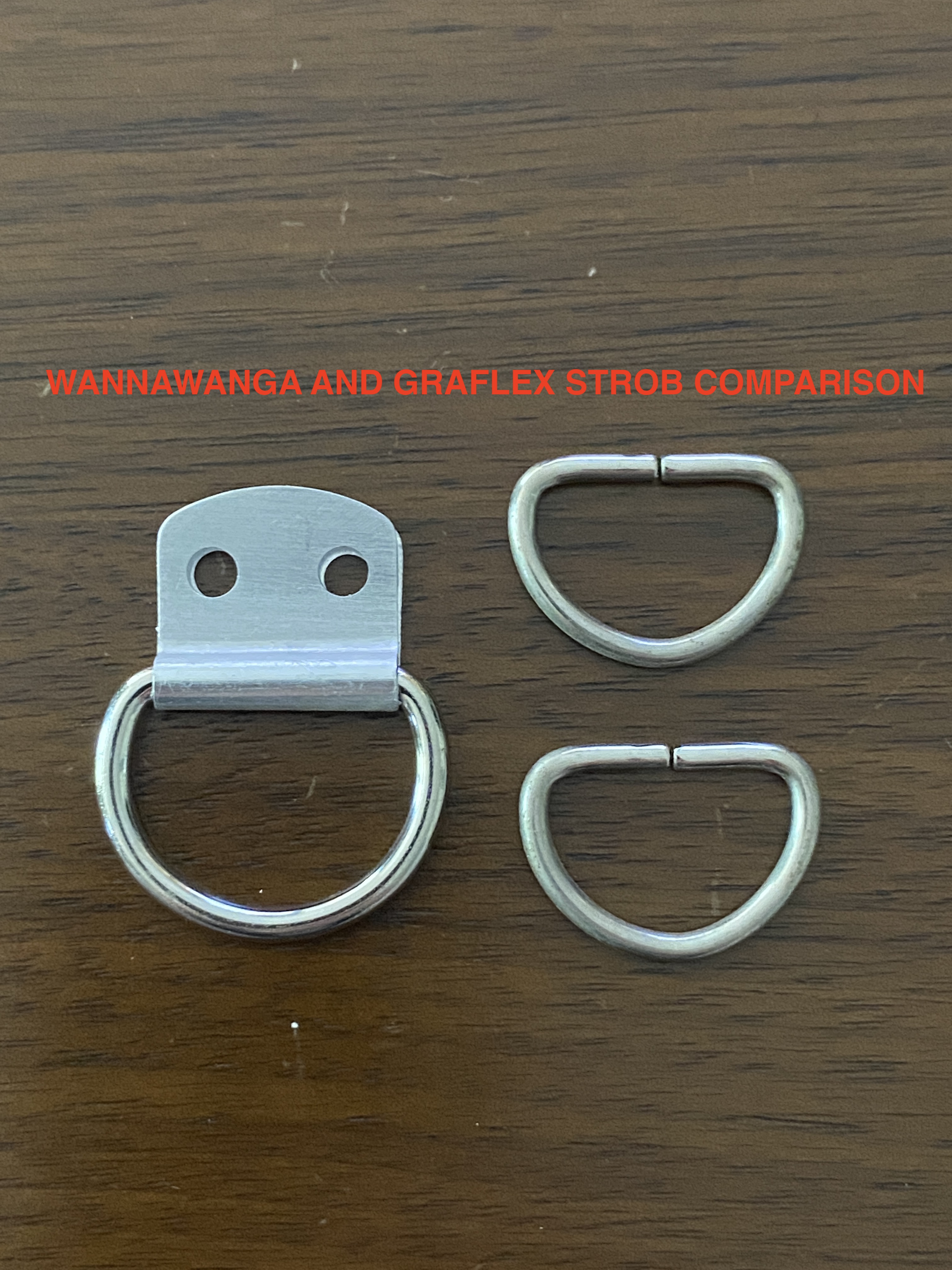 Smaller than the Fibrelite and differently shaped as well. Not a good solution unfortunately. 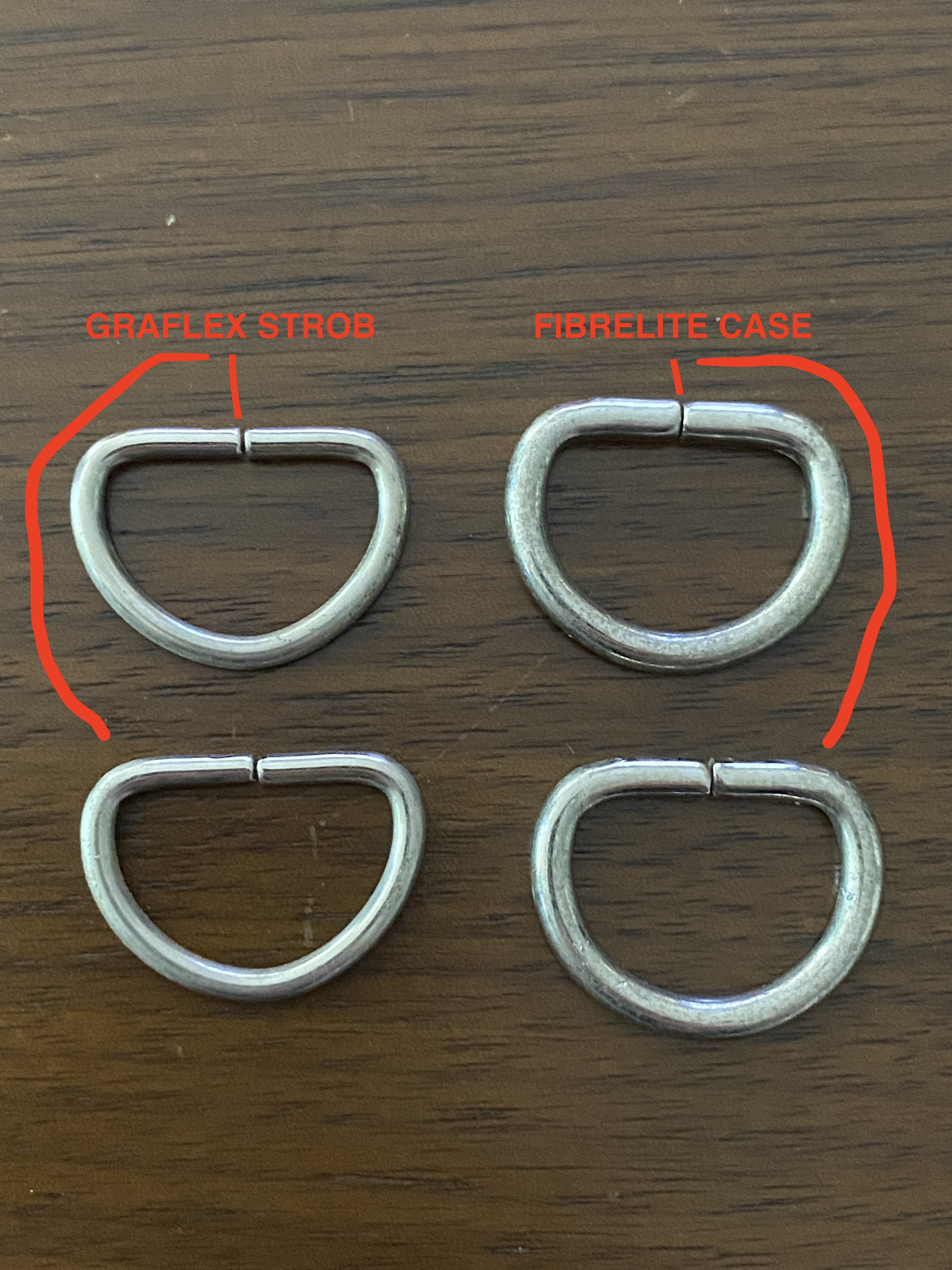 I do think the Strob rings are intriguing as a possible Vader d-ring but we'll see in future posts.

Finally, we come to the clip that rivets into the base of the Graflex. This was a bit of a longshot and funny enough I saw it mentioned as a possibilty on this very forum but it didn't seem tp get any responses or traction from what I saw.

This is the strap clip setup for a variety of the smaller format "Baby" Graflex cameras. Here's a sample of what I mean: 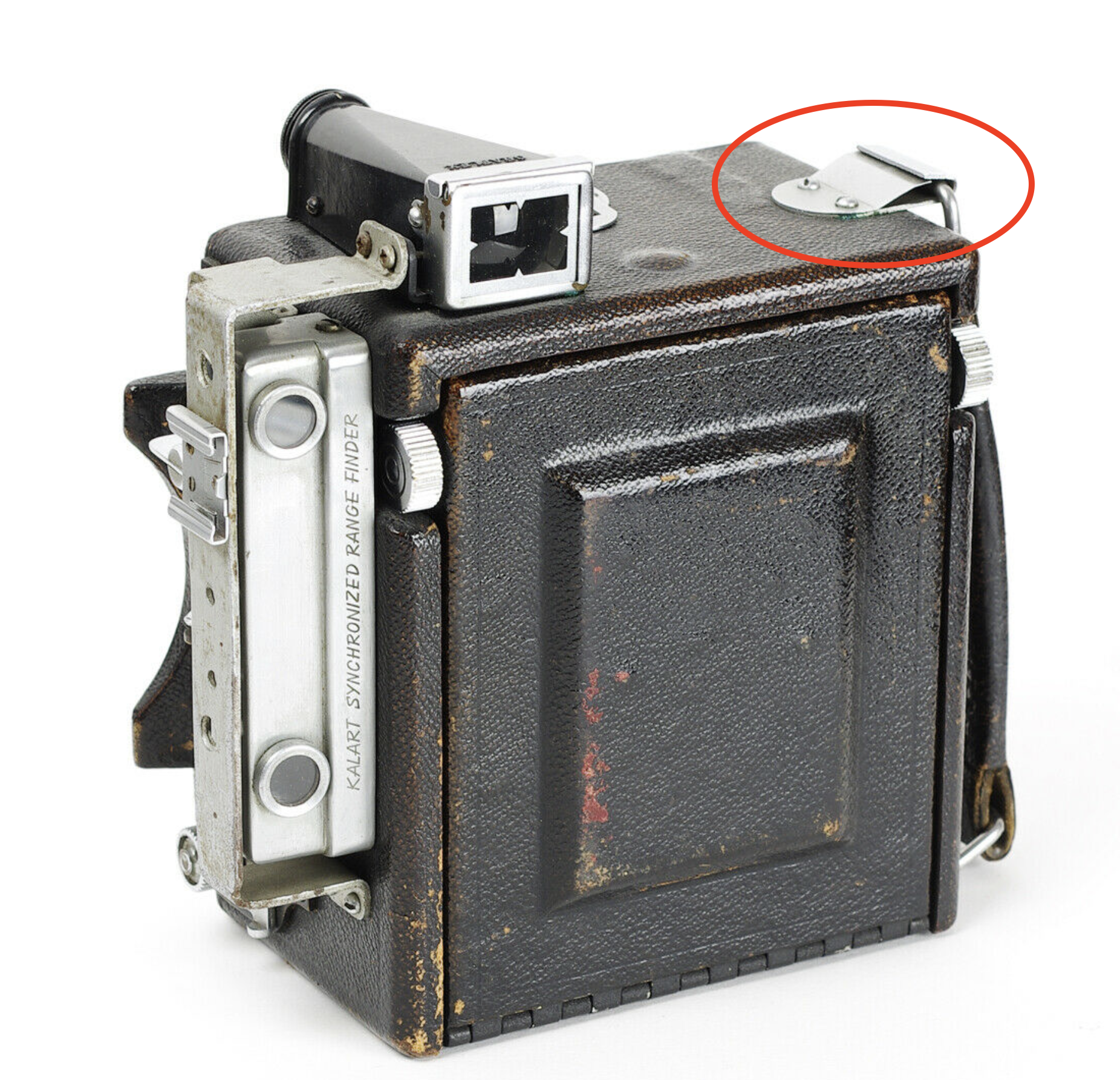 It's composed of two pieces. The lower pieces is a thicker metal(?) lug and the upper bit is the springy retainer piece that the strap loop pushes down on ands then clips into place and is locked in. Interestingly, the thicker bit does not react to a magnet but the thinner piece does.

Both of those bits seemed intriguing, both lower and upper. And after receiving them I was able to compare to the Wannawanga d-ring. 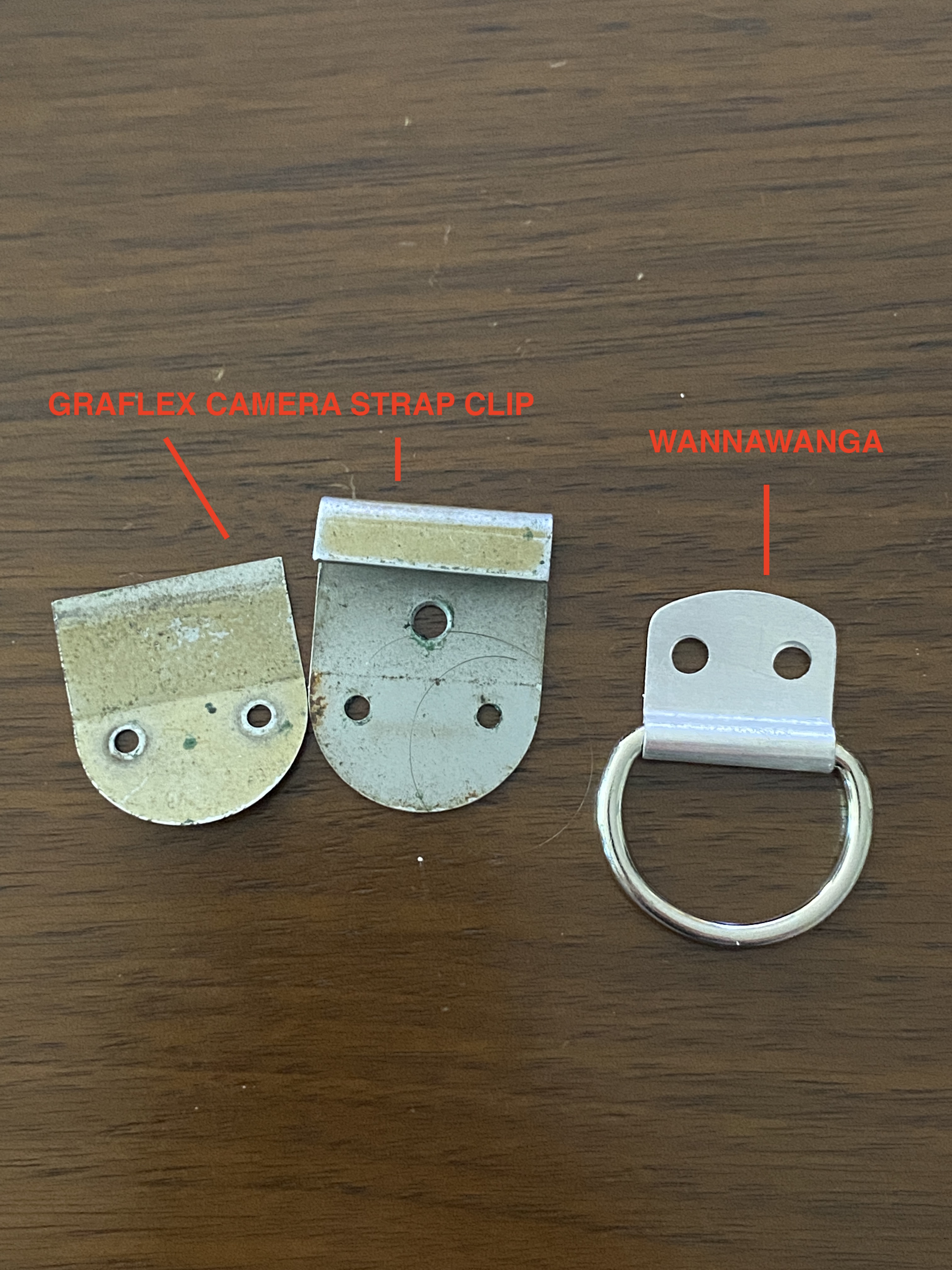 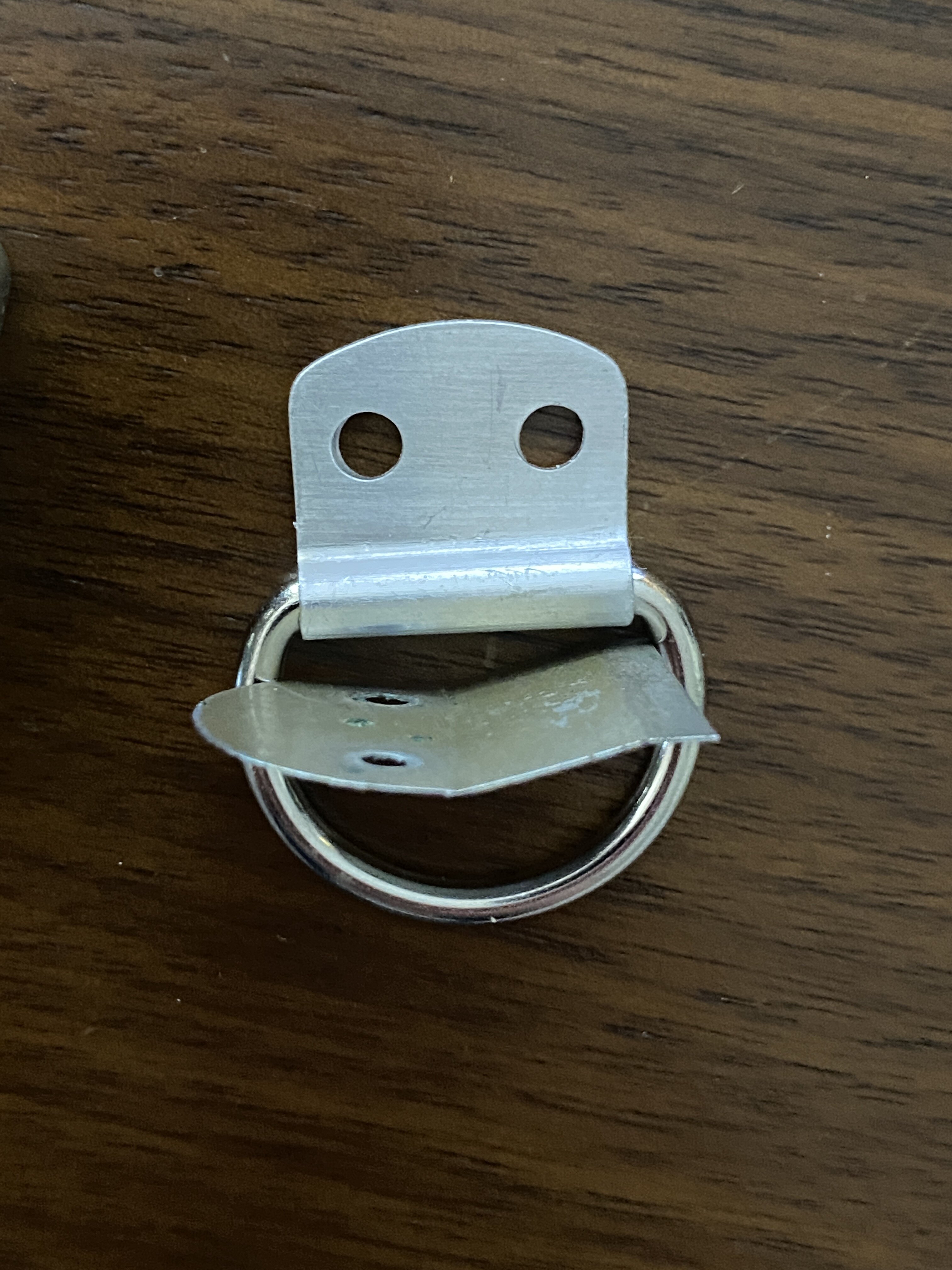 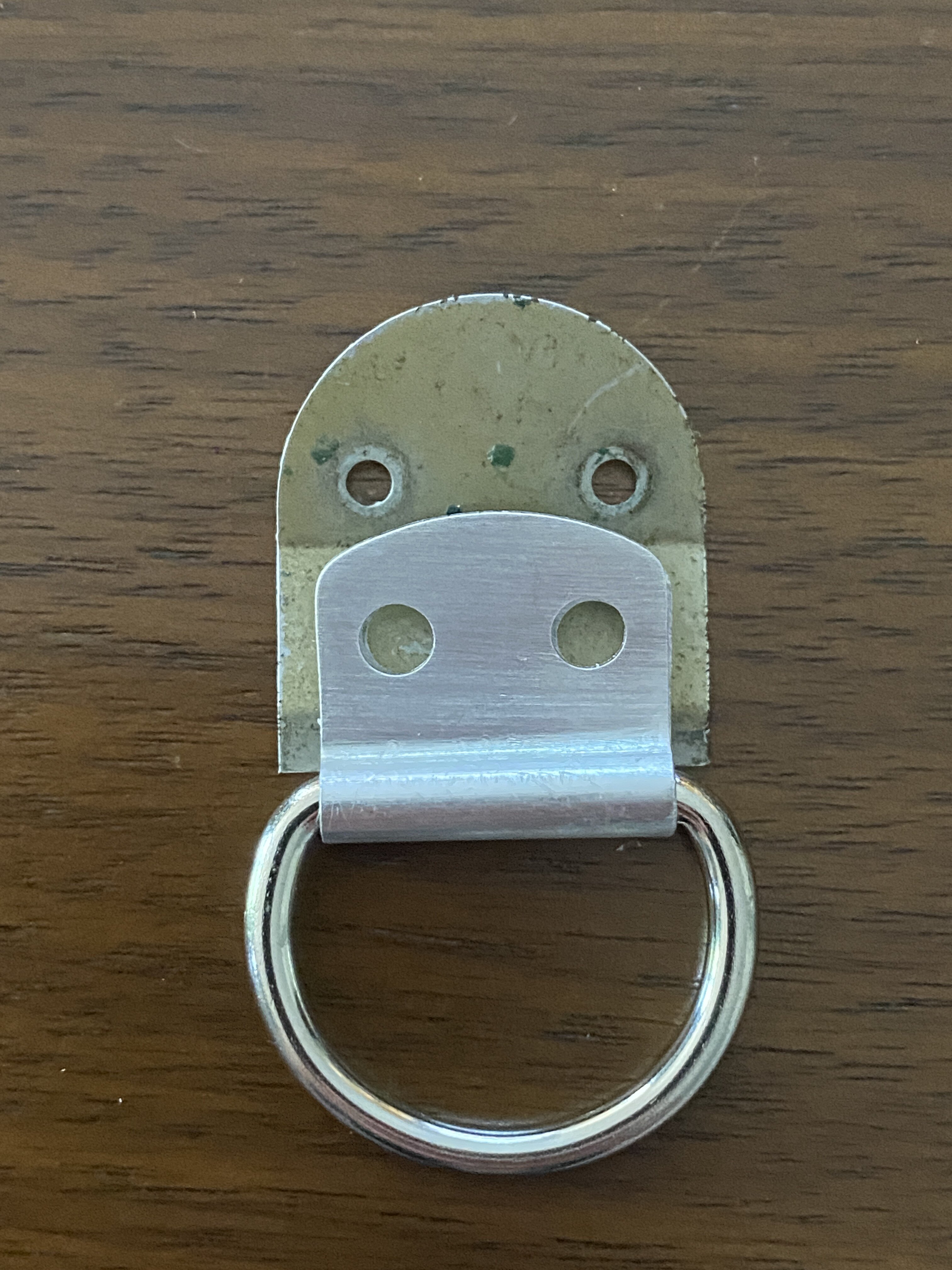 And while they don't align perfectly, they doo make for interesting vintage options if you want to go that route.

The shape is different as it's rounded and not semi-squared off, though the only version we've seen ( please correct me if I'm wrong) of the squared off look is the Elstree saber.

Also, the rivet holes are further apart as well, but again, that's based on the Elstree saber. And I fully concede that the Elstree saber for now is the authoritative version of the d-ring.

And looking at the Graflex clip, why go througgh the effort of re-shaping it and bending it to form a loop for the d-ring to sit in, especially the thicker metal piece which is very solid and hard to bend.

That's it for now. I'm still looking and hope to find suitable bits one day but the hunt is part of the fun. Not for my wallet though, lol.

RPF PREMIUM MEMBER
Hmmm. Your ideas are intriguing to me and I wish to subscribe to your newsletter.

RPF PREMIUM MEMBER
You replied so you just did! I have some other ones coming in and I'll update as it goes. I'd love to nail a reliable vintage resource for these things. It's been such a roller coaster to get to this point so far. The more info available the better for everyone so people don't waste their time with mis-buys.

Small update to my d-ring analyzation.

I really wanted to use a vintage d-ring. I started to think maybe I could use the previous camera clips I mentioned but they would need to be rolled. I figured I could try to roll them by hand, and that was pretty much impossible. 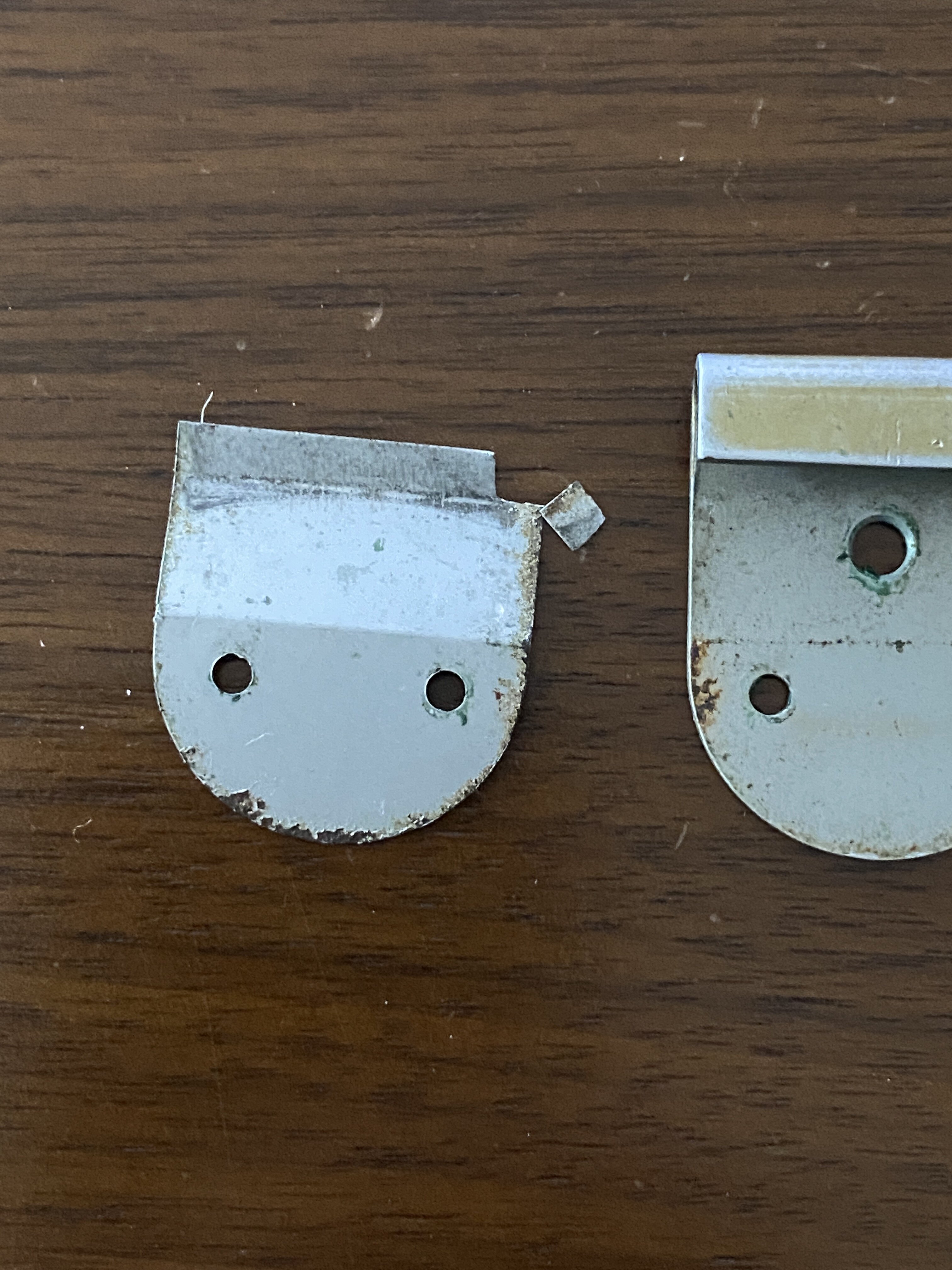 The thicker piece was too hard to do and the thinner metal just plain snapped so I think it's safe to say they weren't used for the clip.

But, did think it would be possible to use the previous rings I had acquired. I decided to stretch them and see how it went. 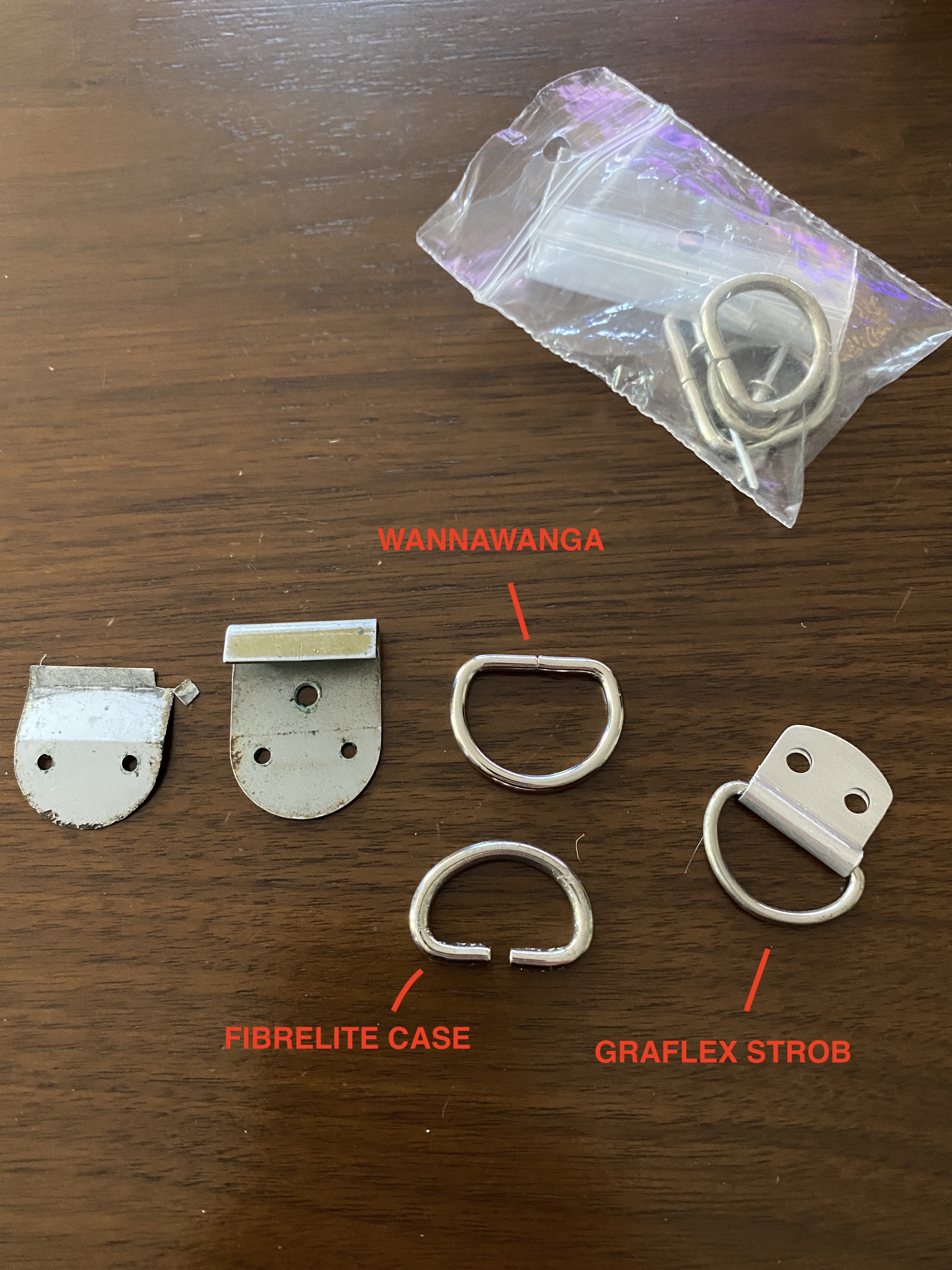 While the Fibrelite case one more resembled Roys sourced d-rings, the Graflex Strob one just fits and looks better with a smaller profile. So, I'm going to go with that. 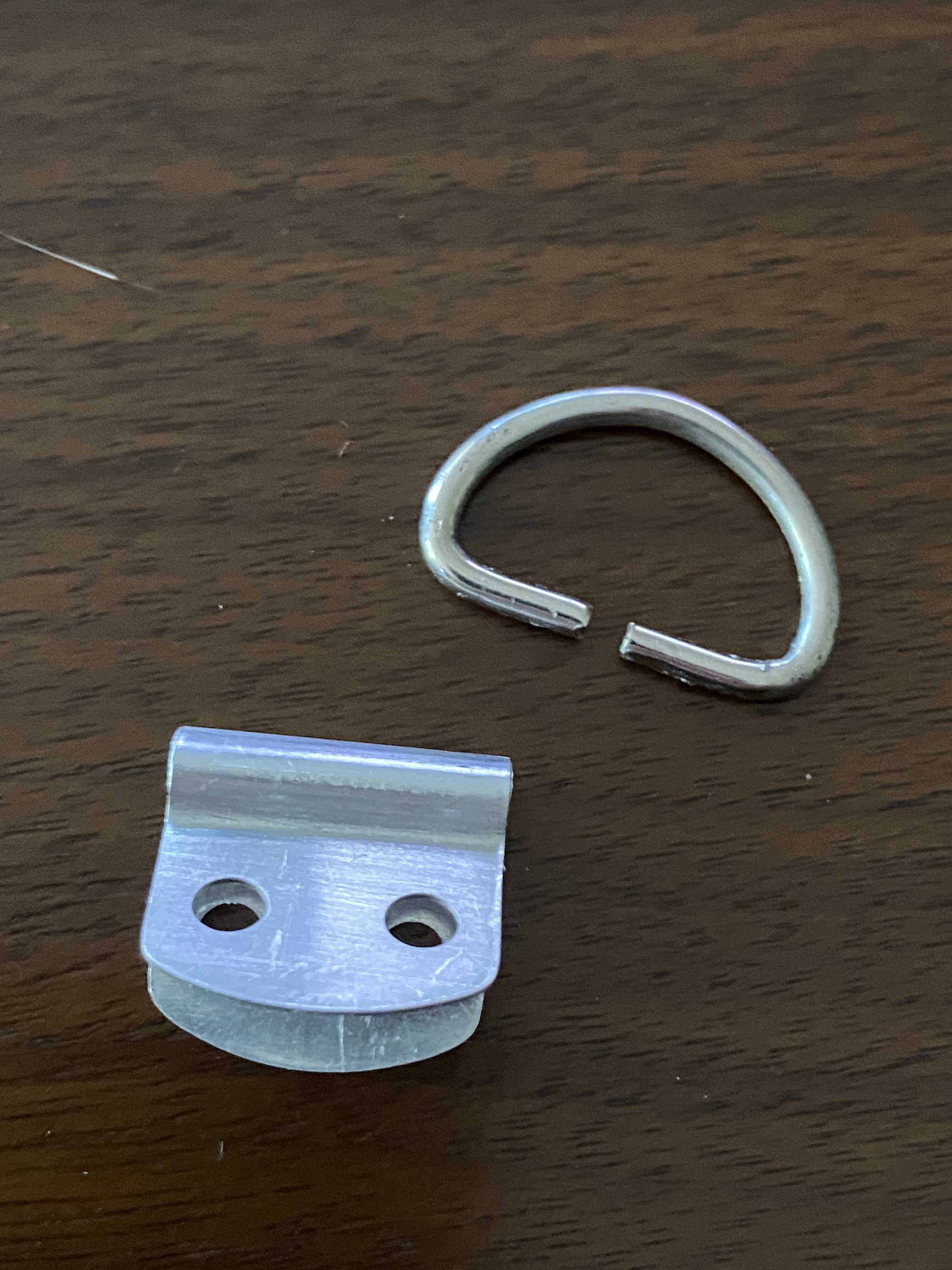 2Cell said:
I'd love to nail a reliable vintage resource for these things
Click to expand...


That to me would be awesome. While I still have yet to add a d-ring to my all vintage Obi ANH because I'm too chickenshit to drill the faucet knob, when I eventually do, it'd be great if it were a vintage part.

RPF PREMIUM MEMBER
Just reading the thread where the process is detailed gives me the willies, lol.

RPF PREMIUM MEMBER
I did it by eye with a cordless drill! Not to say a drill press or mill isn't helpful, but you can do it by hand too My obi D ring was from an old Army first aid kit. It actually had the year stamped on it, something like 75 or 74 if I'm right. I think the one for my Luke also came from some old Army thing, I ended up doing a load of looking around Army Surplus stores to find suitable pieces. I did so with a replica D ring that was about the right size in hand to reference against

schrodinger555 said:
I did it by eye with a cordless drill! Not to say a drill press or mill isn't helpful, but you can do it by hand too My obi D ring was from an old Army first aid kit. It actually had the year stamped on it, something like 75 or 74 if I'm right. I think the one for my Luke also came from some old Army thing, I ended up doing a load of looking around Army Surplus stores to find suitable pieces. I did so with a replica D ring that was about the right size in hand to reference against
Click to expand...

The problem with the vintage cubes is they are brittle. You can be as careful as you think and still crack or crumble them. The safest way to drill your cubes is very slowly by hand. I meen drill bit between your fingers. No drill motor. And even that could back fire.

schrodinger555 said:
I did it by eye with a cordless drill! Not to say a drill press or mill isn't helpful, but you can do it by hand too My obi D ring was from an old Army first aid kit. It actually had the year stamped on it, something like 75 or 74 if I'm right. I think the one for my Luke also came from some old Army thing, I ended up doing a load of looking around Army Surplus stores to find suitable pieces. I did so with a replica D ring that was about the right size in hand to reference against
Click to expand...

What are the measurements of your d-ring?

RPF PREMIUM MEMBER
My phone won't let me quote for some reason, but anyway! I didn't realize the sink taps could get brittle that badly! And here's some photos of my ring on the obi! 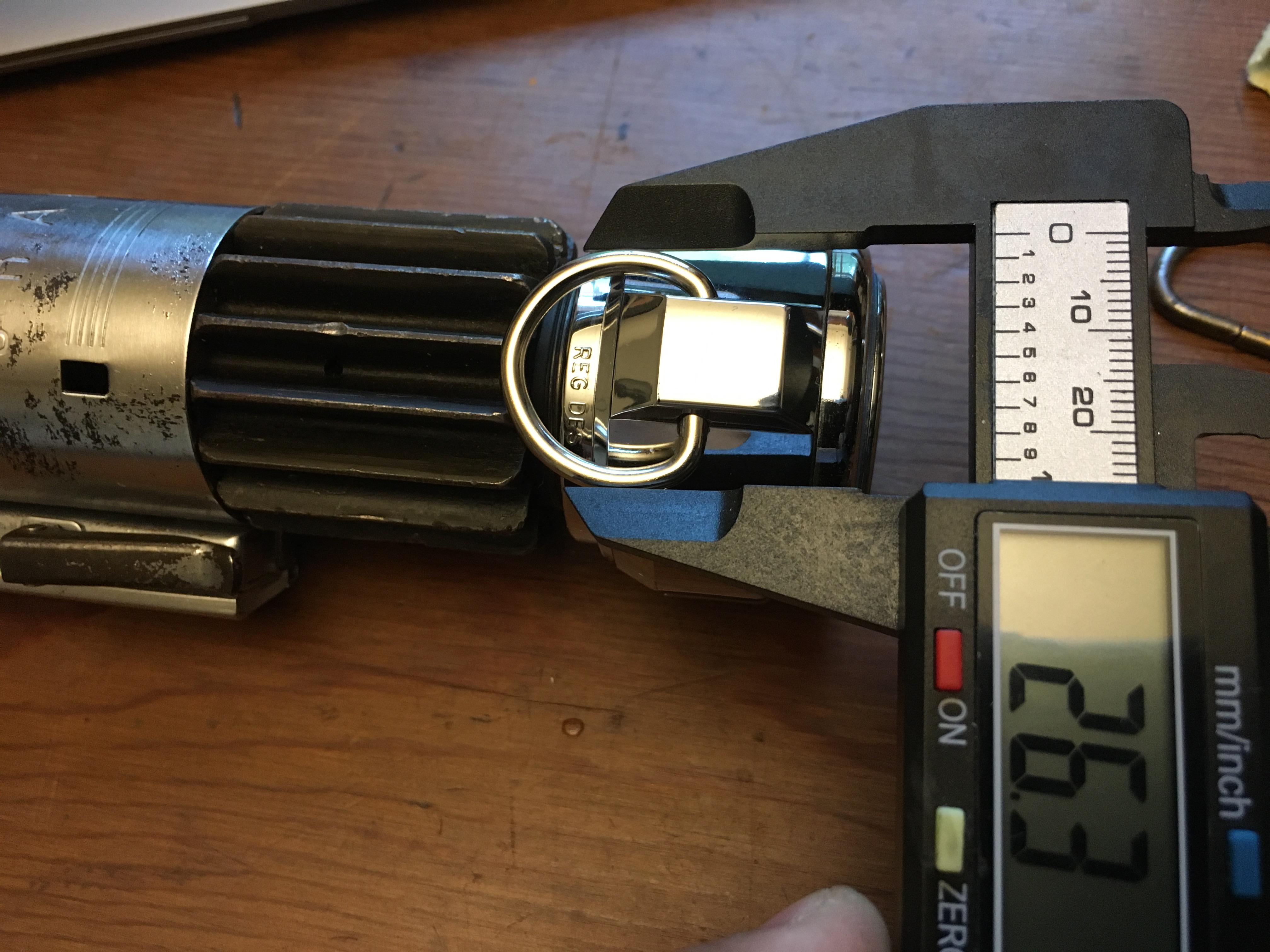 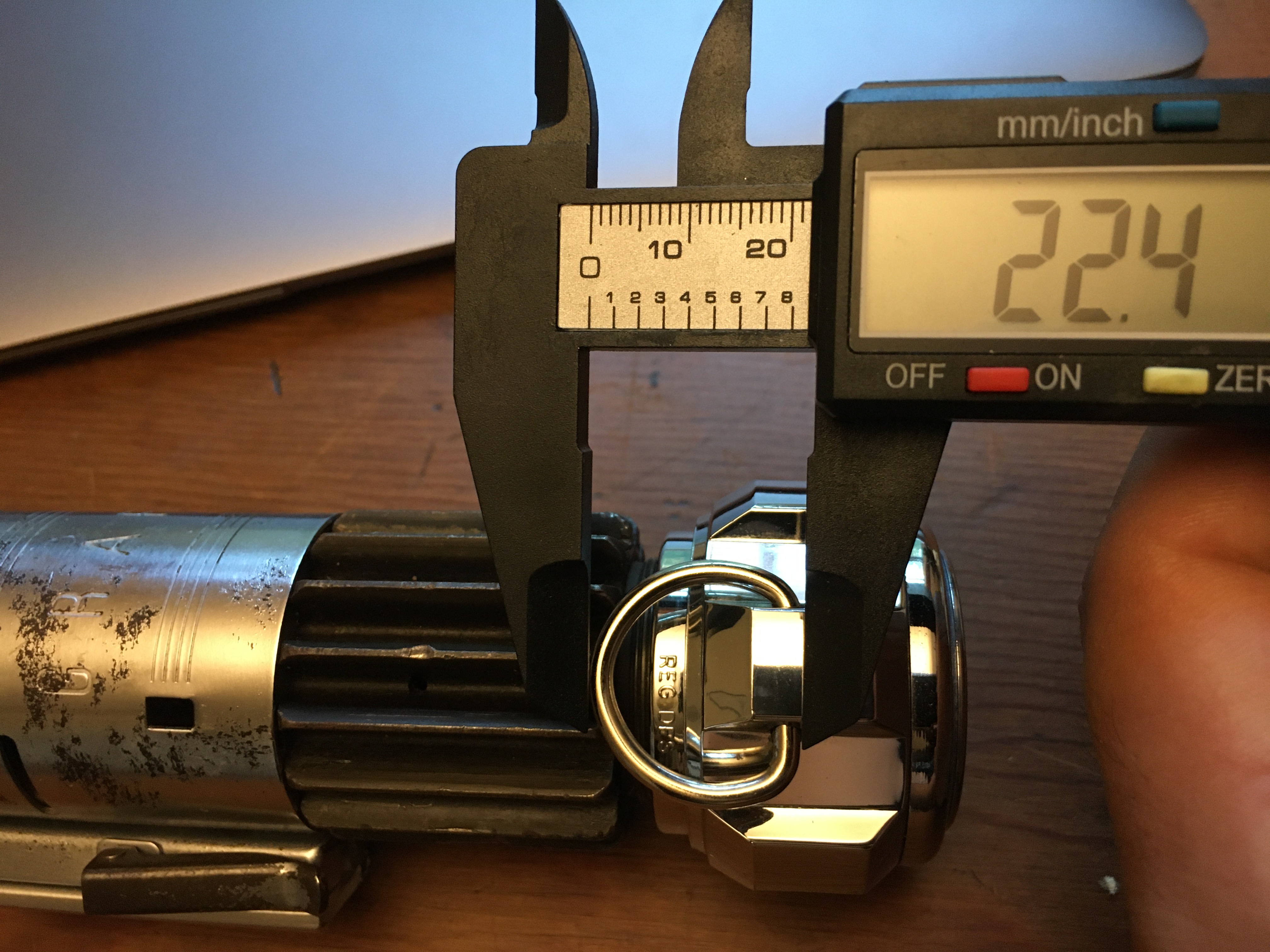 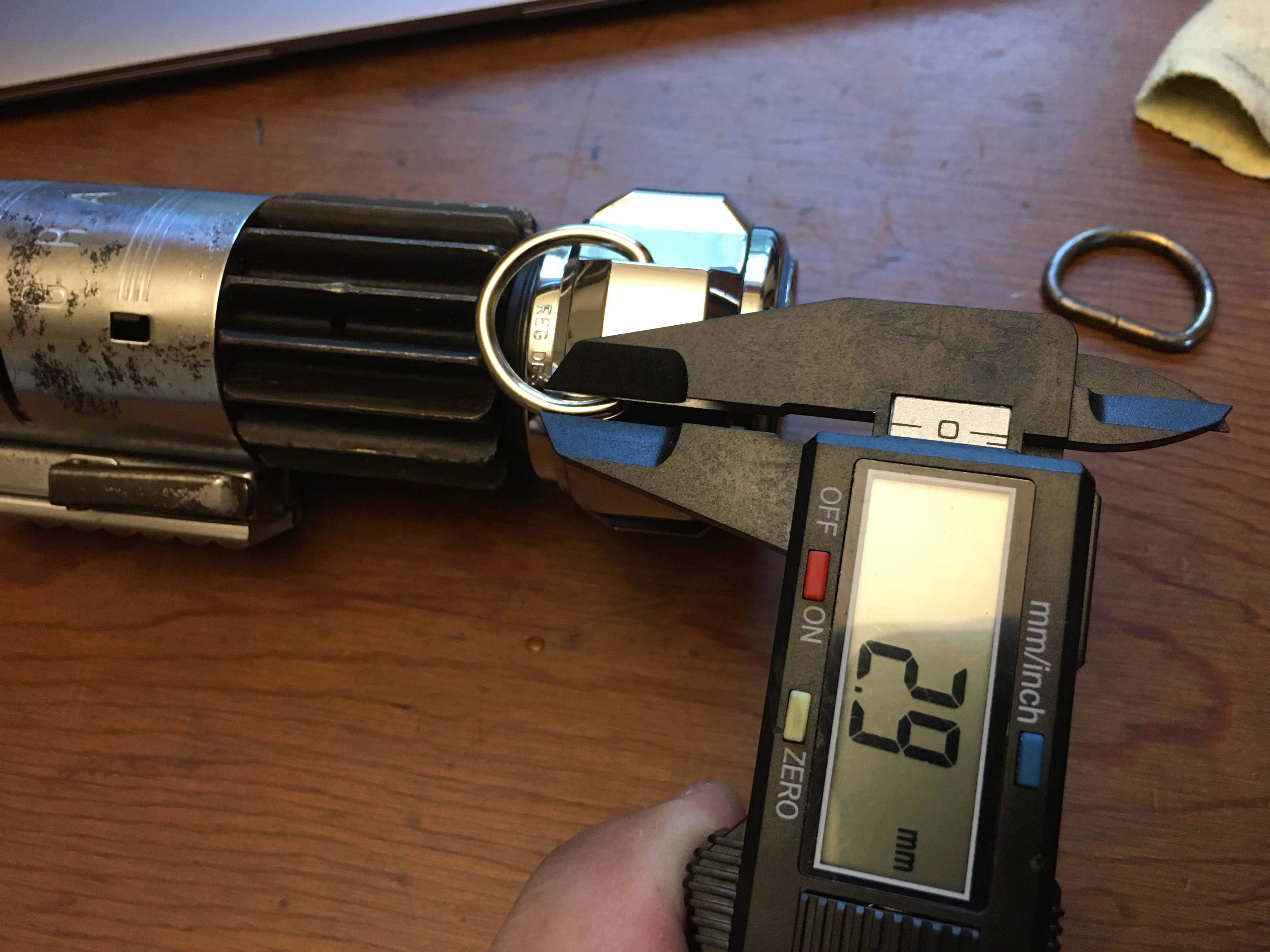 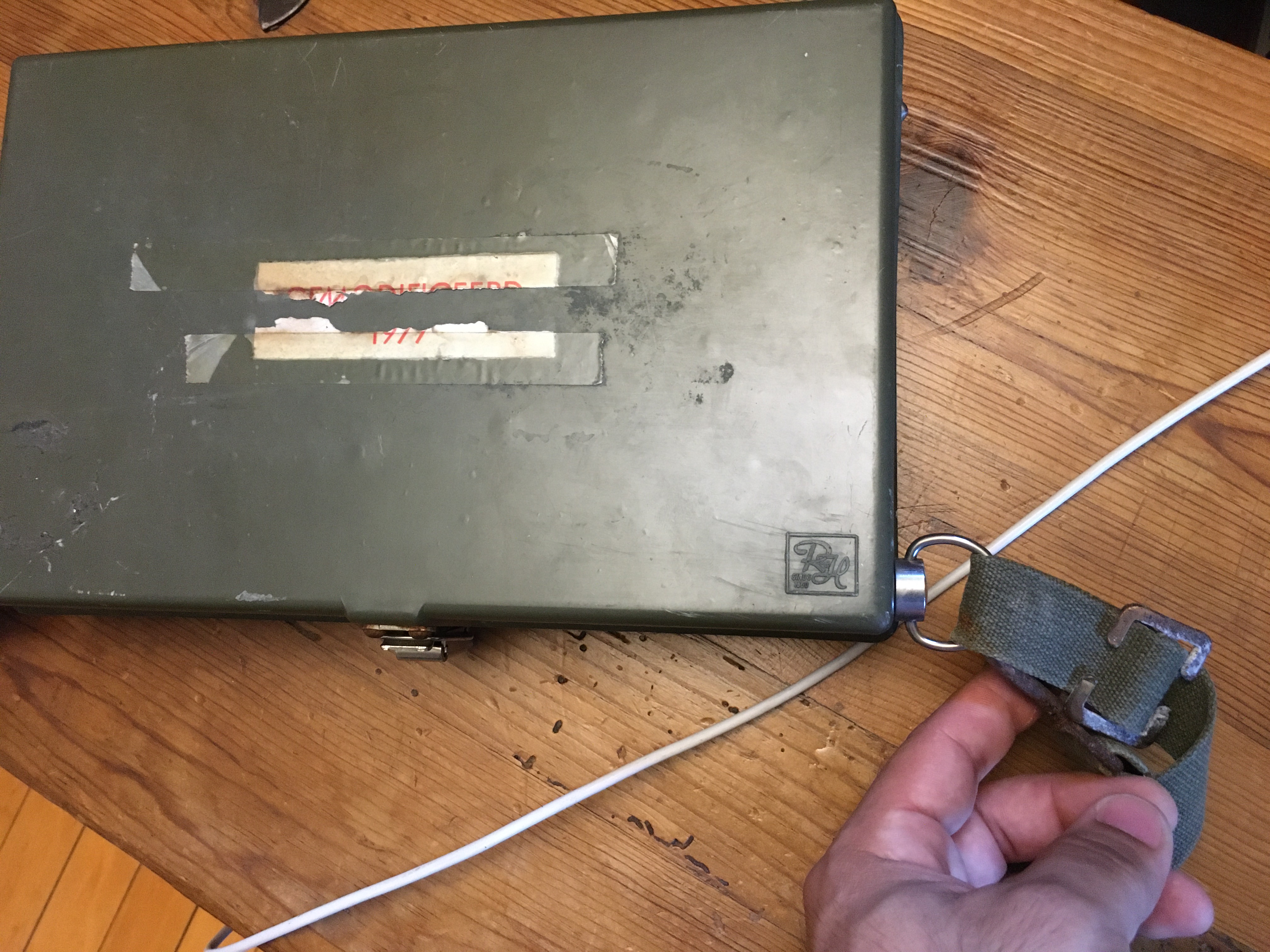 RPF PREMIUM MEMBER
The aforementioned d-rings look to be a great source for the Vader Saber. 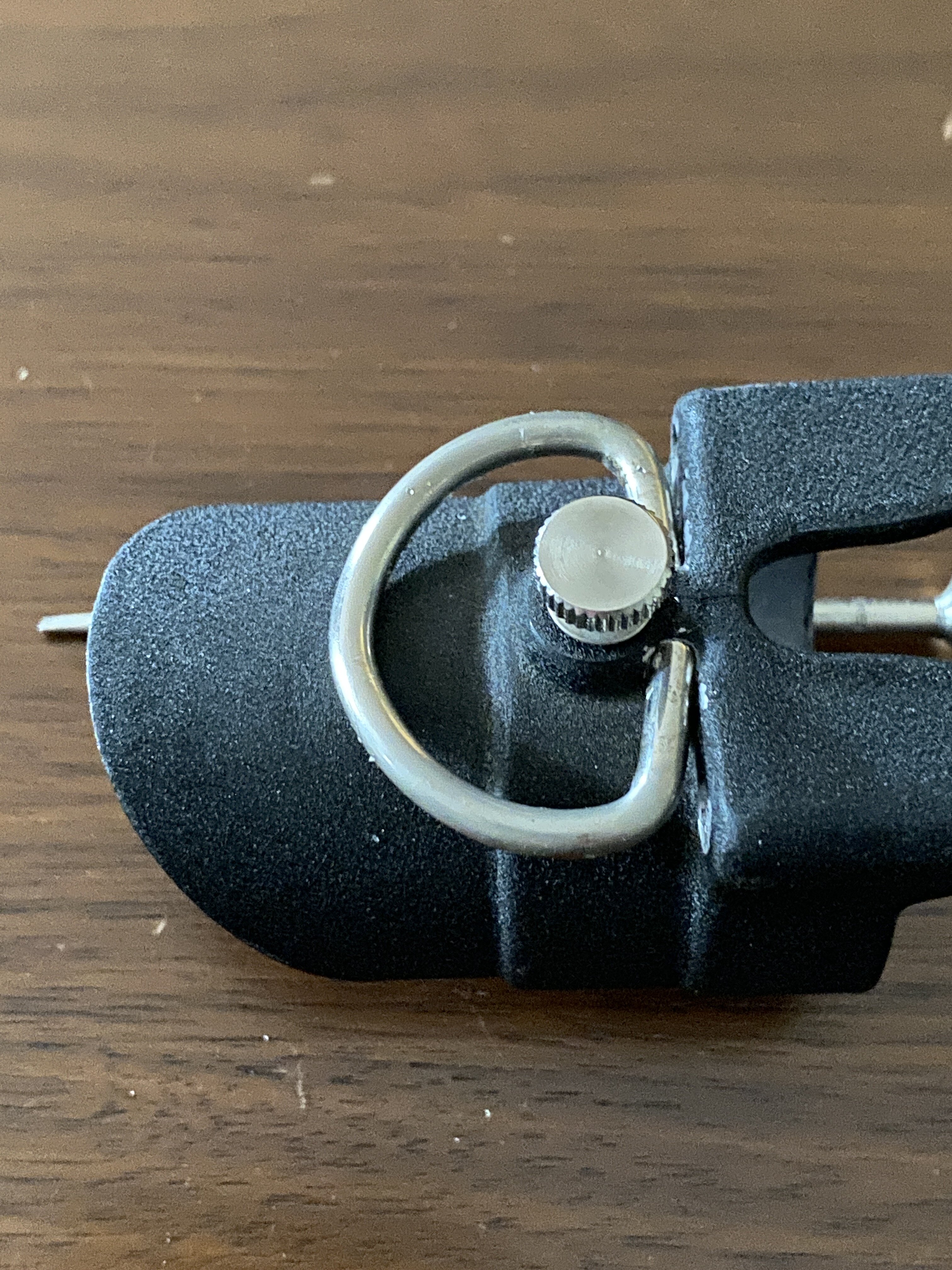 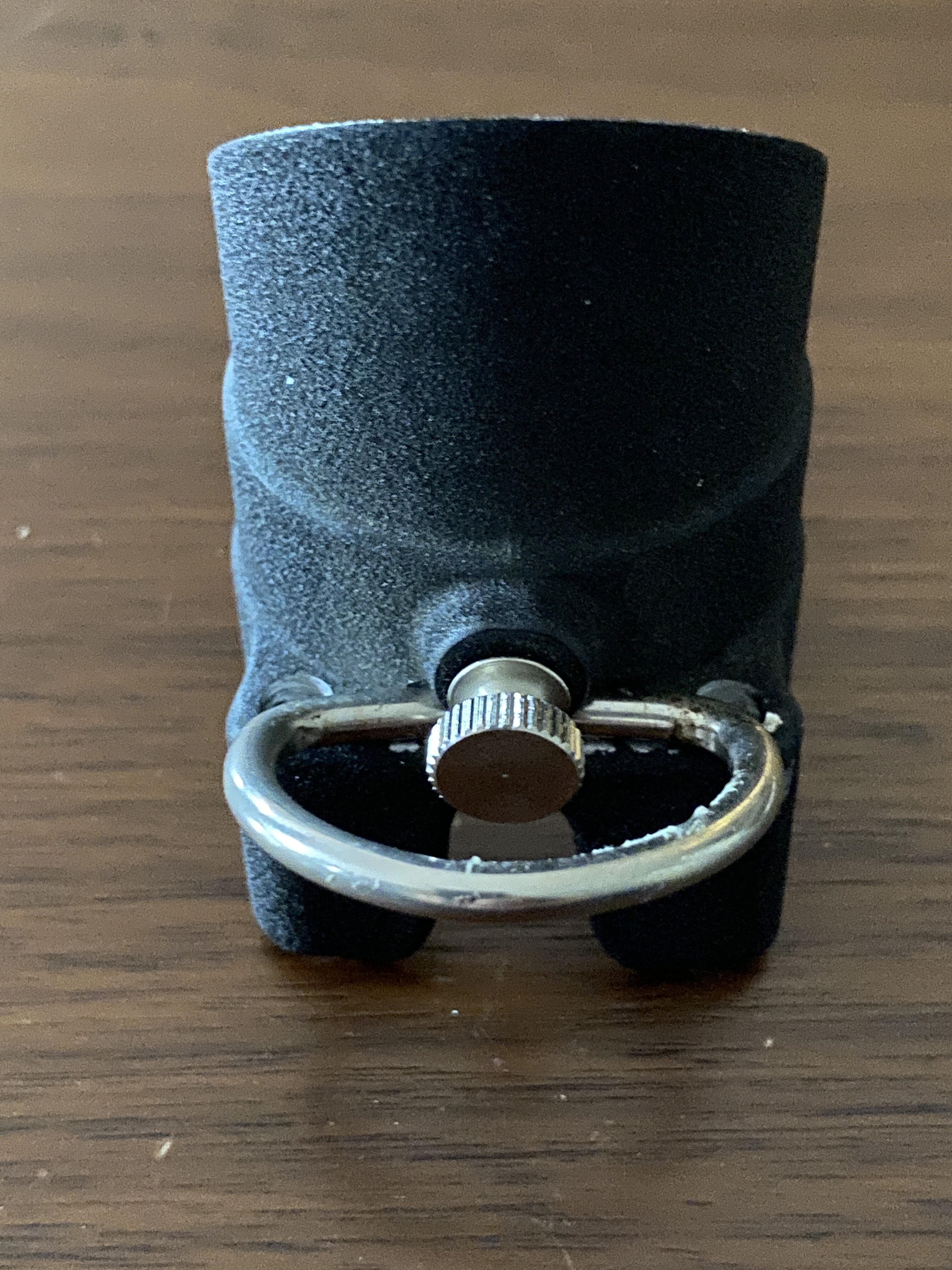 I'd be confident recommending these to any aspiring saber DIY'er. What do you guys think?