i recently got two new Latinum pieces which makes it 4 in my collection. Can anybody tell me how these sizes are called? 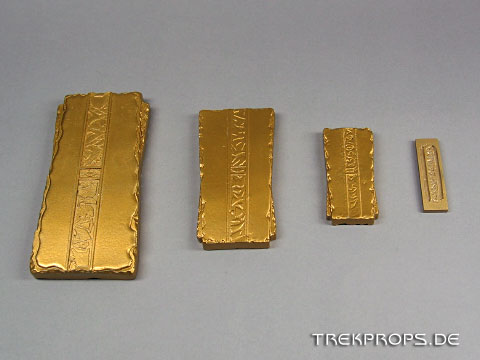 Here's what I know - from left to right:

Bar, ?, Strip, Slip - correct? There's another size of these - the brick - which is not pictured here.

So, what's the missing piece? Someone told me that it's called an "Ingot", can anyone confirm this?

RPF PREMIUM MEMBER
I don't know much about DS9 and the newer Trek incarnations. I'm a TOS guy.

However, I found a site that attempts to draw together information from various canonical and non-canonical sources, which lists the following denominations of latinum:

Here's the address of the site:

The Economy of Star Trek

Are you sure that the one on the far left is a bar and not a brick?

The far left one isn't a brick. Bricks were shown in the episode where Morn faked his death, and they had a trapezoidal cross section, rather than just being rectangular prisms.

Here's the site I got my info from: memory-alpha.org
K

I hate to say it but you're spinning your wheels; I've checked all resources I could find and personally own- there are only four denominations of latinum: The Slip (smallest), Strip, bar and brick. My best guess is that whomever created that set wasn't paying enough attention and messed up. On Ebay - someone called the smallest the 1/2 slip - no such thing.

The only logical assumption is that since we don't know much about how the currency is made, there could be two different sizes for bars. That sounds illogical though - why would the Ferengi do it? Still, there is no evidence that the Ferengi mint it - the scrip on the currency doesn't look Ferengi. My guess is that someone goofed.
Last edited: Jul 17, 2010
K

Hi Guys,
There were 5 sizes of Latinum. Pictured above are all but the big bar/ingot.

RPF PREMIUM MEMBER
I believe what you have there is a bar, strip, slip and half slip. You're just missing the brick.

After the RPF site update - I can't hit reply or post