mung said:
Joberg those Space 1999 fans are outa' luck. I dont plan to be going near building another truss for some time to come.
Click to expand...

I can understand...seems that it`s a PITA to do

The next step was to make up the container hanging deck. I drew up a shape in LibreCAD and printed it out full size.
The printed shape was held up to the truss and a few modifications were made to the CAD drawing until I had a shape that I thought would both do the job and look interesting on the model.

The final design was printed out full size and stuck onto 10mm foamex sheet which is a foamed PVC.
I use a UHU stick glue for this job as when you are done cutting out the paper template comes away easily and any residue can just be washed of in water. The trick is to apply the glue all over the plastic surface and then press down the paper template.
Applying the glue to the paper makes it damp and it can warp out of shape.
Also applying it to the plastic gives you more time to position the template as the plastic is not absorbent so the glue doesn't dry out as quickly. Another feature of this particular glue is that it has a blue colour when first applied so you can see where you have been, very useful when applying onto a white surface. The colour disappears as it dries. 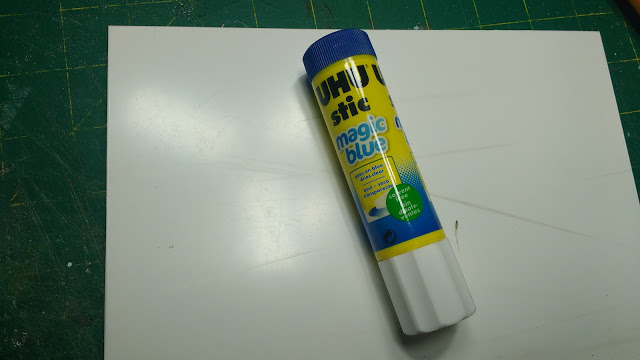 Once the template is affixed all the radiused corners could now be drilled out in this case using a step drill that goes up to 12mm, all the corners having a 6mm radius. 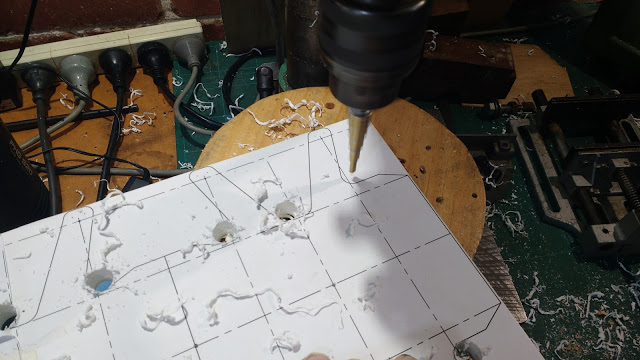 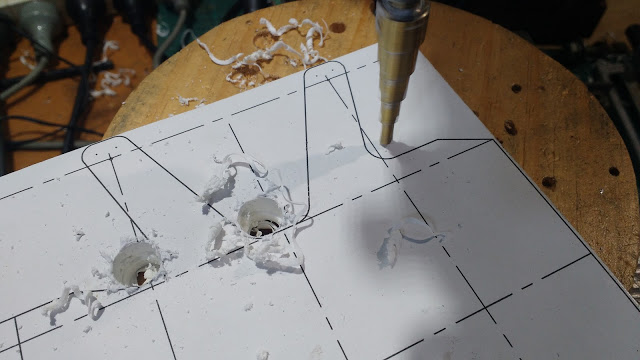 With the holes drilled the process moved to the bandsaw for cutting out the rest of the outline followed up by various sanding sticks both flat and round. 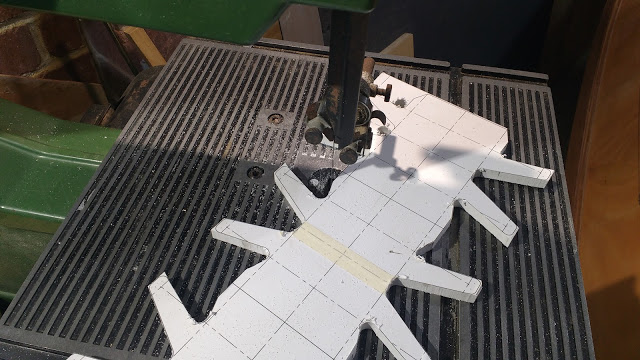 I had an idea to use strong magnets to hold the containers in position. I got hold of some small neodymium magnets 8mm in diameter and drilled a shallow depth 8mm hole for location. This was then followed up by an 8mm end mill for a flat bottom to the right depth allowing the magnets to be pushed in flush with the under surface.
I am now not so certain that these magnets will be strong enough to hold the containers securely.
I may have to add some supplementary screws.


In the picture below you can also just make out some holes I made in the decks using two sizes of holesaw.
The smaller 30mm holes locate the container which will have a 30mm round protrusion on the top made from a truck kit half wheel.
The larger hole is just for a bit of interest. 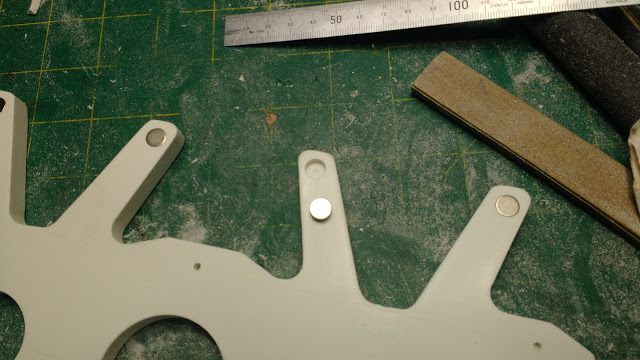 The two container decks (front and rear) were then screwed to the truss using some 7.9mm plastic cable retainers.
They grip very well to the 8mm diameter truss tubing. 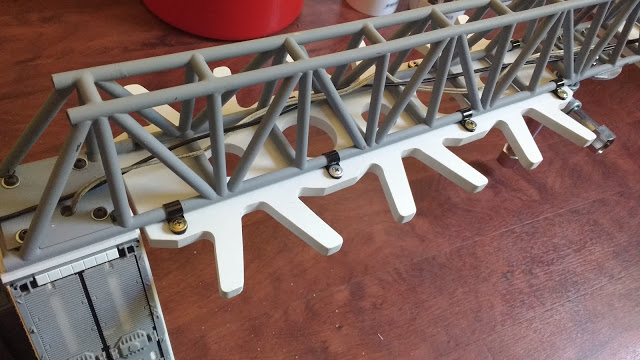 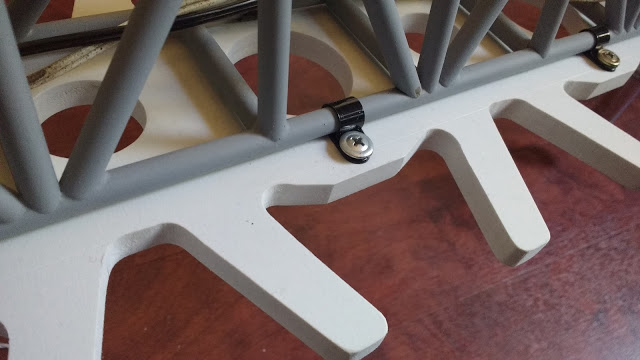 Next step was to build a container.
Originally the plan was to use the plastic index card boxes just as they are with added surface detail, however after the engine section change the space under the truss became taller so I now needed to increase their height.
A strip of 2mm styrene 36mm wide now spaces the two halves the correct distance apart.

Back in LibreCAD I designed up the end plate details which have 6mm corner radii as well as the bottom and side detail plates which have 4mm radii. These plates were all to be made from 2mm styrene. 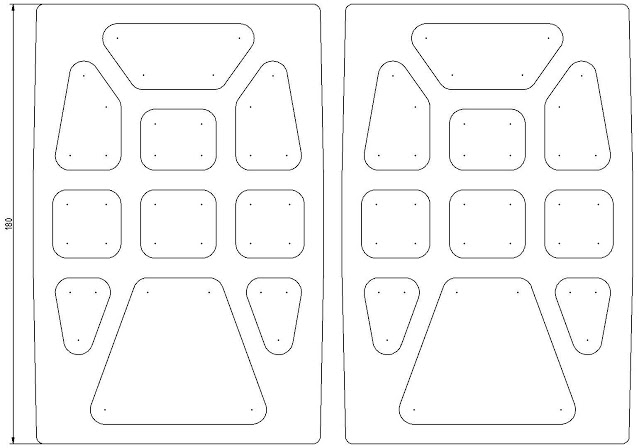 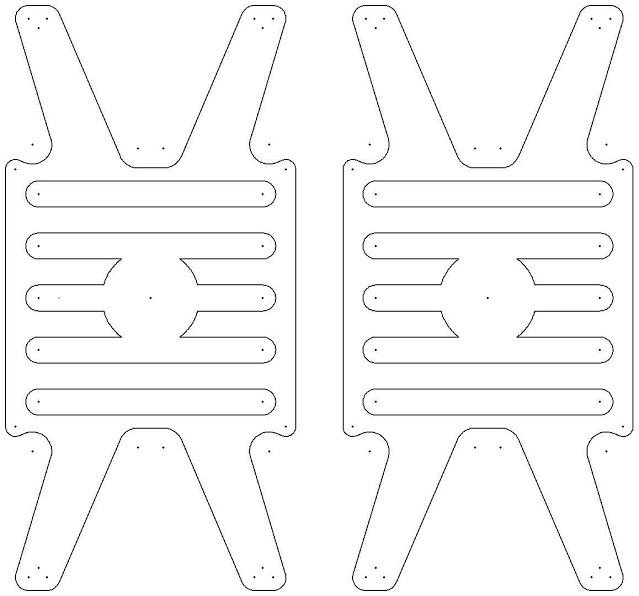 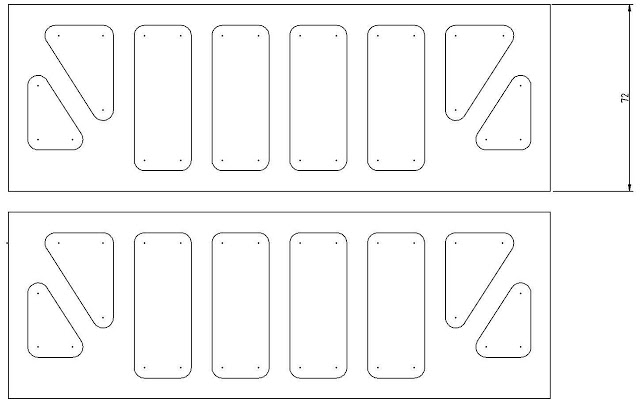 Eventually I found I could cut 5 shapes out at a time. 5 pieces of 2mm styrene were sandwiched together using double sided tape, radiuses drilled out using the step drill to 8mm and then cutting out the holes on a scroll saw.
This was a pretty tedious process as there are 10 ends with 10 cutouts each , 20 sides with 8 cutouts each and 5 bottom shapes to make for the 5 containers.
Because each step of the step drill was less than the 10mm thickness of the combined 5 sheets of 2mm styrene, I could only drill so far on the first side and would then have to flip the material over to finish the hole to the correct size all the way through from the other side. 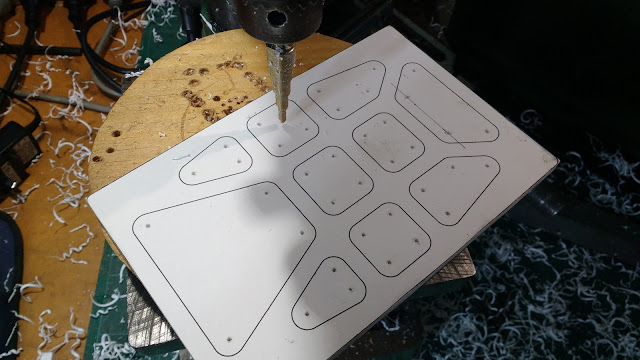 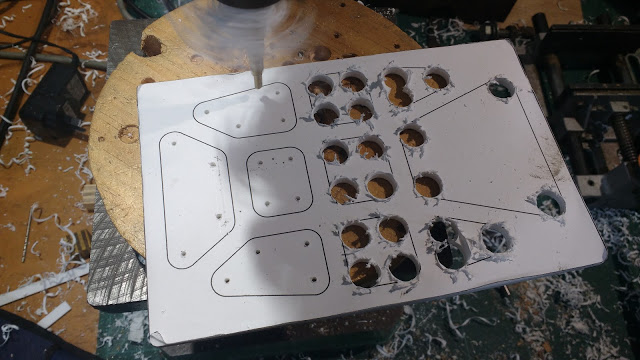 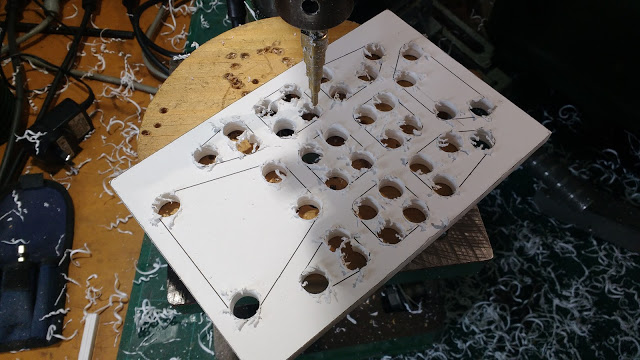 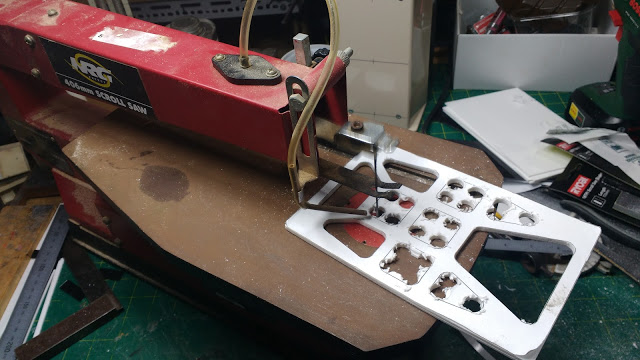 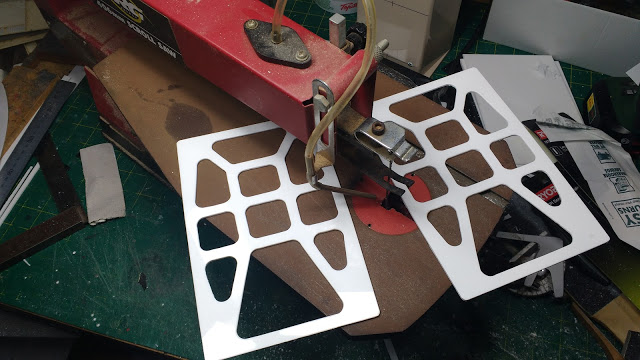 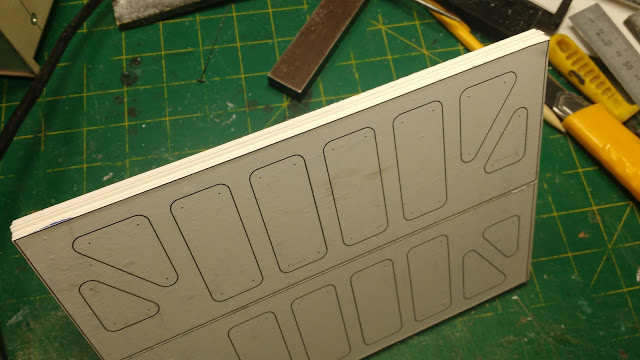 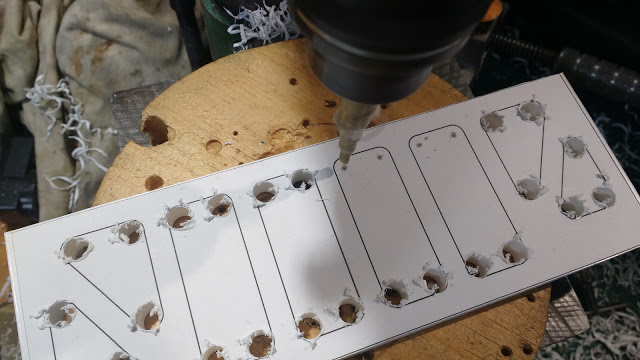 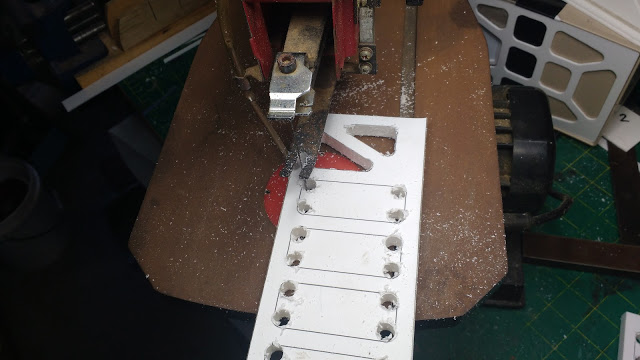 If only I could afford a nice small CNC router to handle this sort of task.
Unfortunately I can't but lucky for me my labour is free and it is possible to do this stuff manually with a bit of grit and determination. 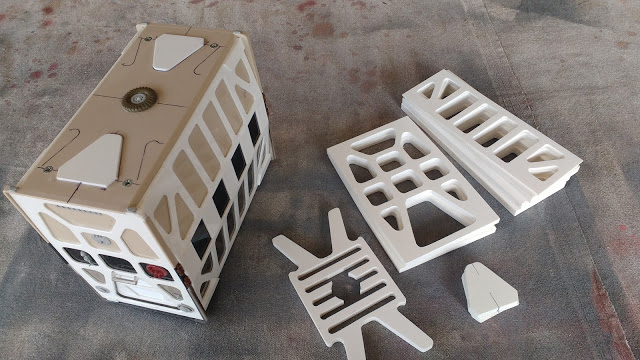 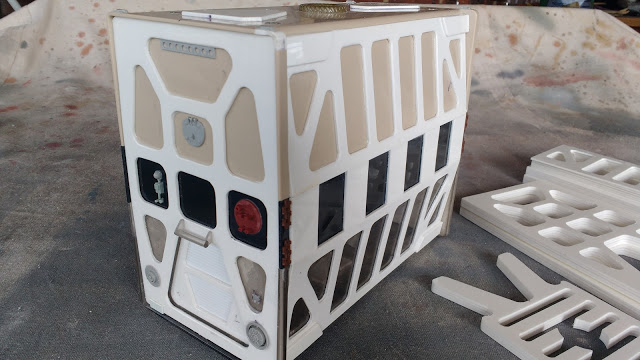 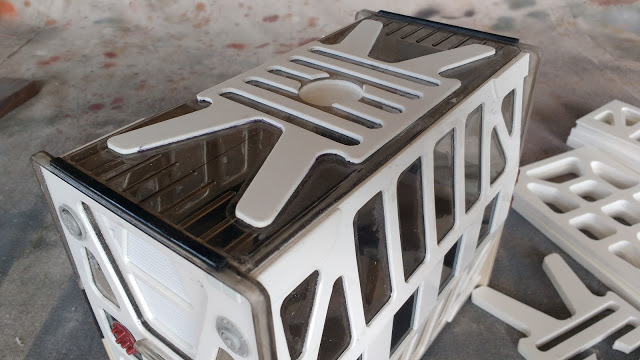 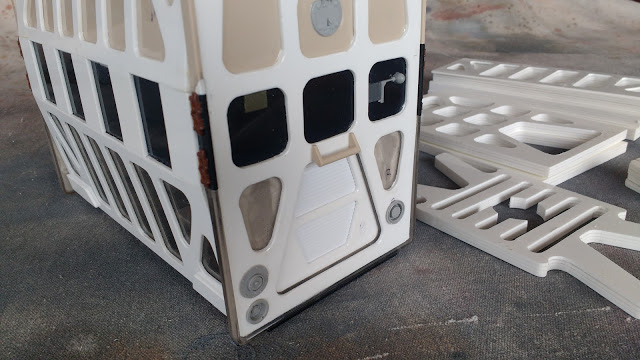 To check and see if all that effort was worth it I sprayed some primer to see if it was all going to come together. 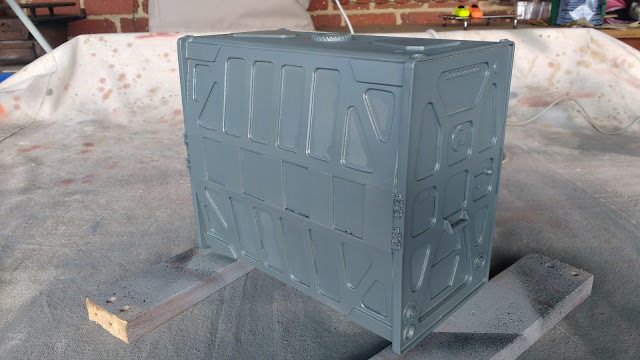 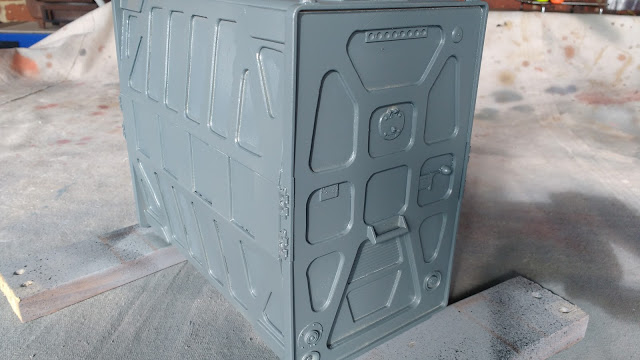 I would have preferred the proportions not to be so tall but the container fits the space it will go in and will probably look fine when they are all mounted together. The plan is to paint each one differently as if from different shipping companies. The small surface details will also slightly vary mainly because I don't have enough duplicate kit parts to make them all exactly the same.

Anyway that's one down, four to go plus there is also the sixth tanker container to make.

Indeed...the scratch building is great + the greeblies make for a great thread
S

Really good industrial type design applied to this model. Assortment of materials chosen appears to adds to defining the overall details. Your “sprinkling” of greeblie art, as pointed out by others, is striking.

Discovering a thread this neatoriffic is like finding out my favorite band made another CD at their prime!

suggestion: Bob Ross Moment- start with a detail that everyone thinks, "noooo way, looks terrible! STOP!!!" but finishes withh all of us saying, "happy little greeblies!"

Cant wait to see/hear how it ends!
S

Do you have an updated pictures of the Container Ship like you just issued for the Merchant Vessel. Love those designs and your work.

Searun said:
Do you have an updated pictures of the Container Ship like you just issued for the Merchant Vessel. Love those designs and your work.
Click to expand...

No updated pictures as I got distracted by the Merchant Vessel Project.
Before I commenced the Merchant Vessel I started another project which uses the original abandoned container ship engine pod.
I have not as yet posted a thread about it.
The project I am currently working on is the Science Vessel which will be the next one I will push through to completion.
Also I have just started a new job which unfortunately leaves me a lot less hours to devote to my projects with the upside that I can now afford to get some more model making supplies.
Hard to say when I will get back to the container ship. Having to make 4 more containers like the first one has slightly dampened my initial enthusiasm, but I will get back to it eventually.
Last edited: Oct 15, 2021

I understand you feelings perfectly. Some models have so much of the same repetitions of parts/greeblies/details that, sometime, it's overwhelming and mind boggling. Same thing happened to me while building the 2001 Space Station V. 240 windows to cut and then frame them each with 4 quarter round. So, you do the calculation: 960 pieces to cut and glue one by one!