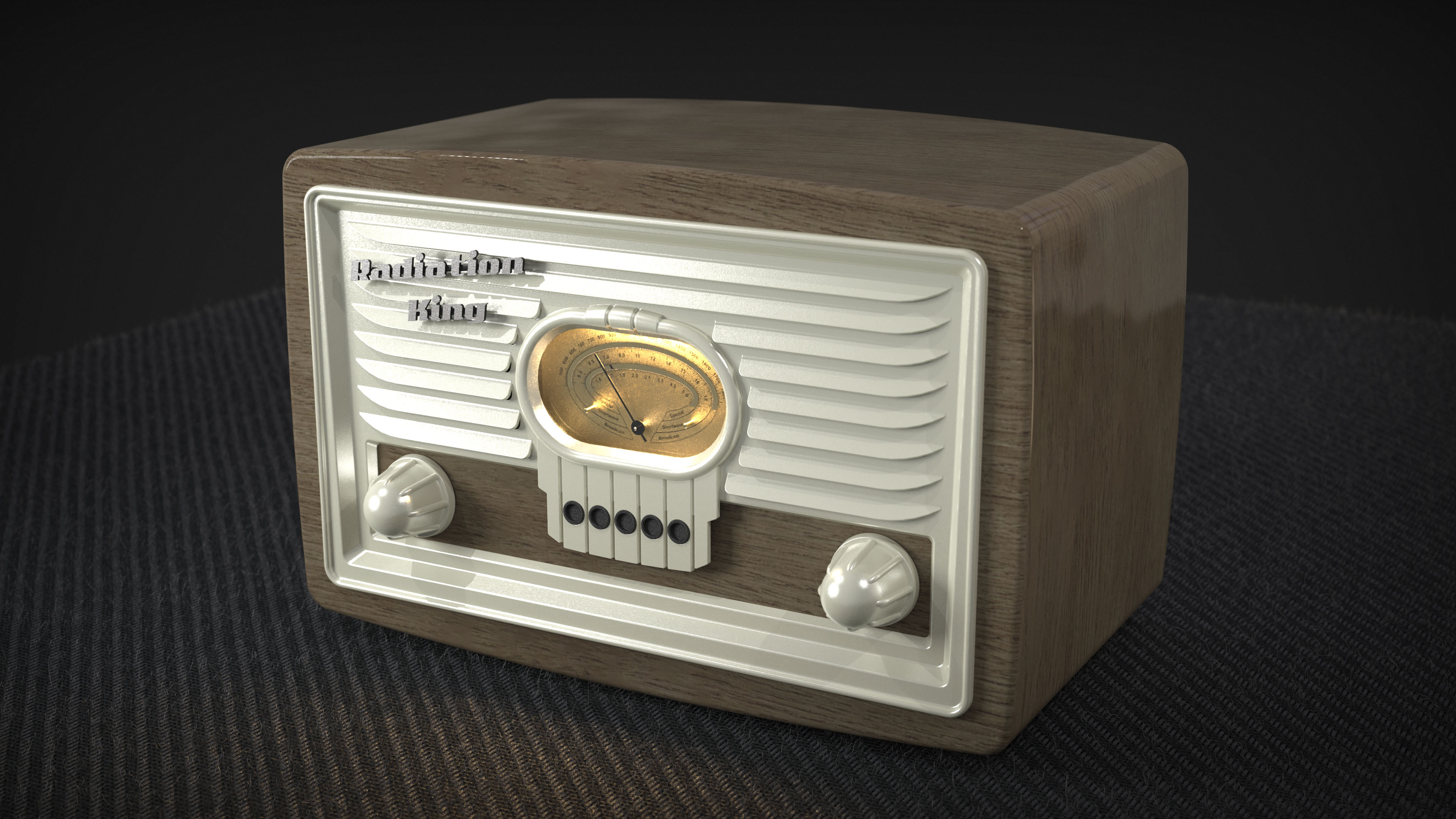 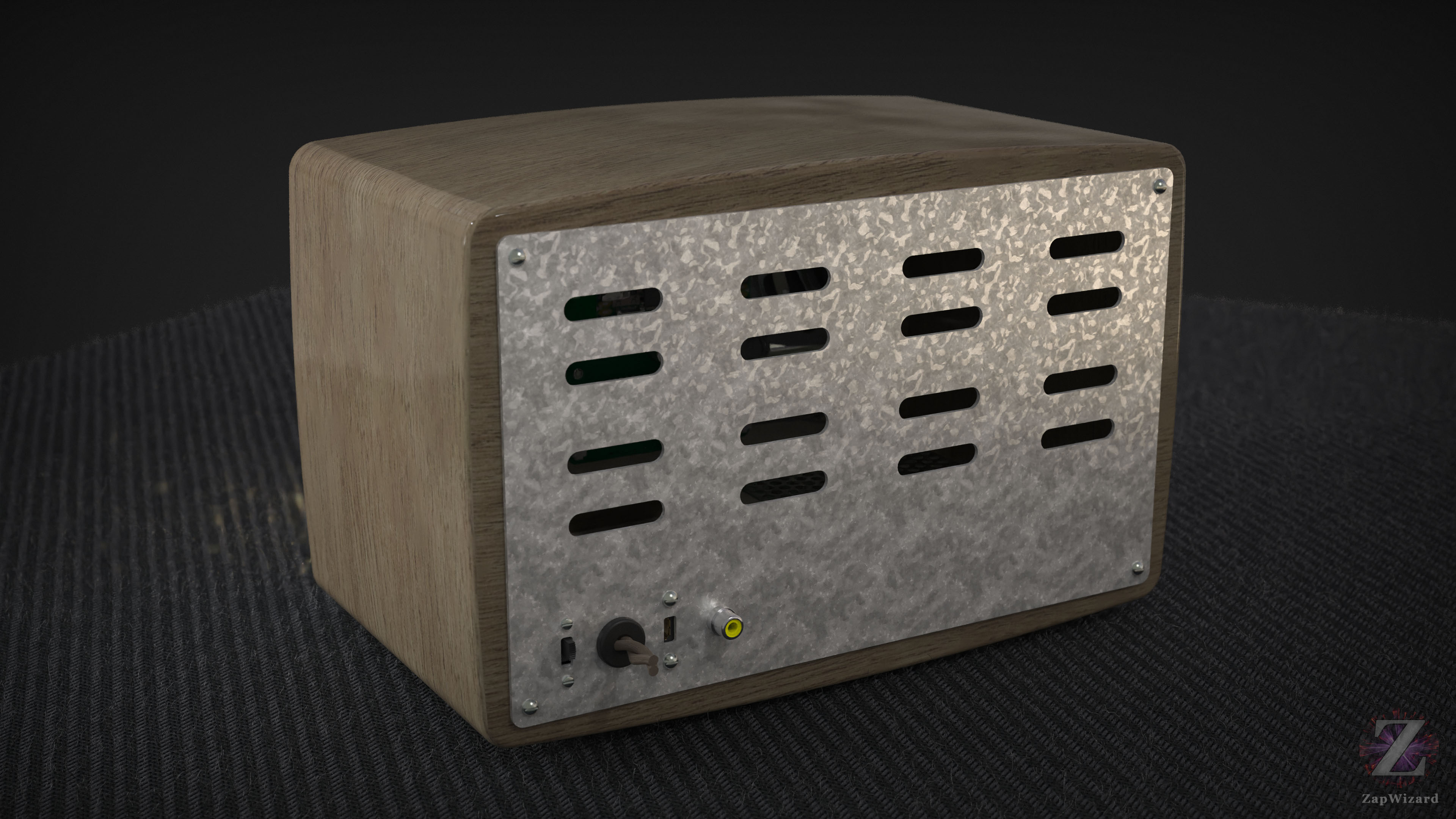 How about a new rendering.

I may not end up modifying the original Philco radio. The front of it is curved in such a away that getting the faceplate to fit perfectly will be very difficult. I would also have to color match the insert panel and I am not confident that I can do that to my satisfaction.

So I have updated my CAD design to be a game-accurate shape. The in-game design has the darn knobs pushed way towards the sides, when I would rather have them centered inside their cutouts. Fortunately the insert panel can be swapped out if I decide to deviate on that detail.

/Update: I can push the knobs to the nicer centered position. My friend pointed out they are centered in Fallout 3. 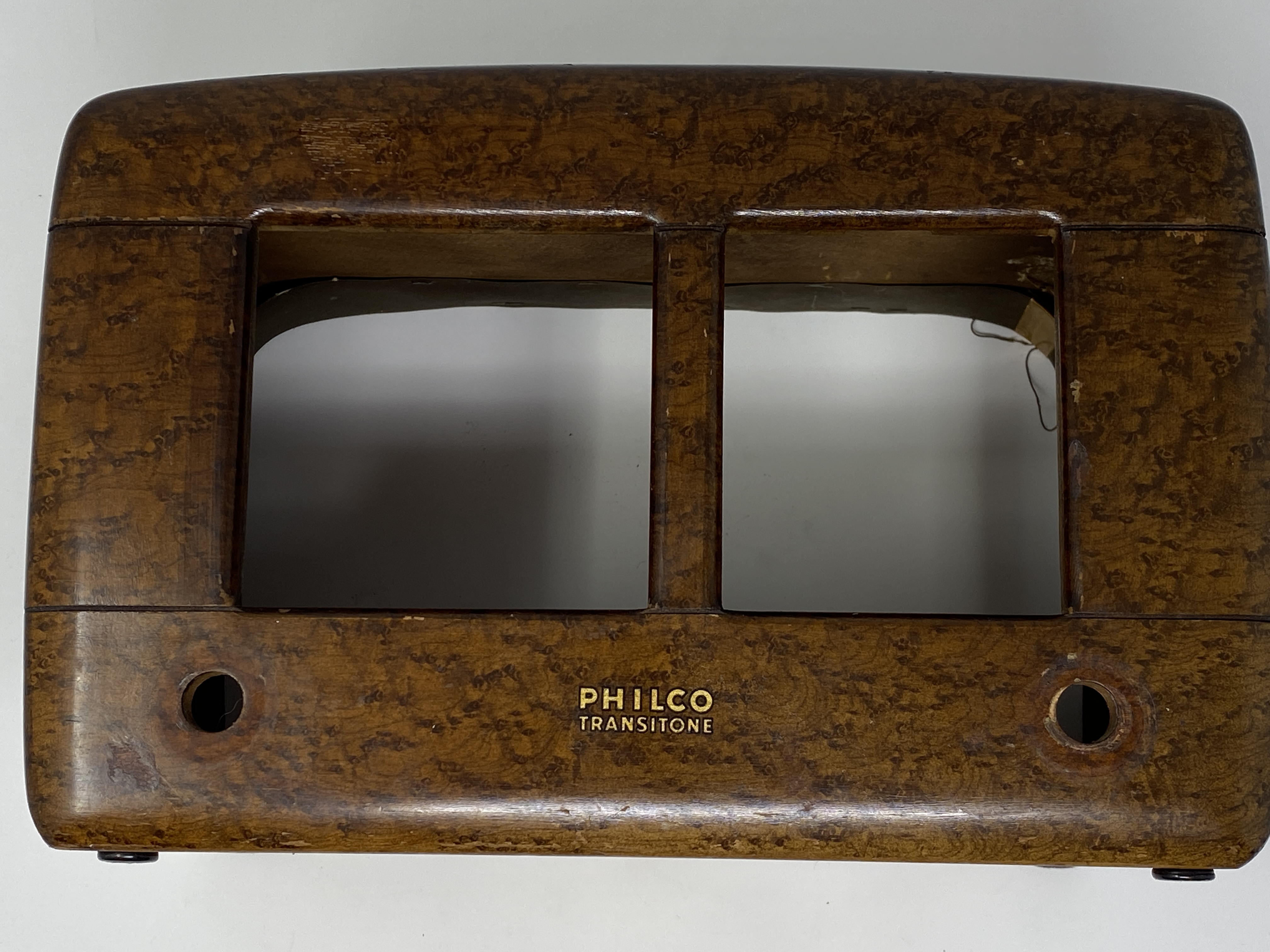 The construction will be built the same as the Philco radio with a plywood base, and wooden sides, top and back. I have not yet decided if I will make it from real wood, or try to do a water transfer print over MDF.

The Philco radio has a "Photo finish", and I can't find any documentation on how they actually applied it. The finish wraps around the entire radio, it is possible they used a water transfer method.

It seems obvious to just use real wood, however the end-grain may cause issues due to the curved edges. I have found a water transfer sheet which is a near perfect match for the grain and tone of the in-game radio.

Regardless of which method I do, I have to decide between trying to CNC carve the wood, or use a tall bandsaw to try to get close to the required curves. I know I don't want to sand the whole thing down to shape. 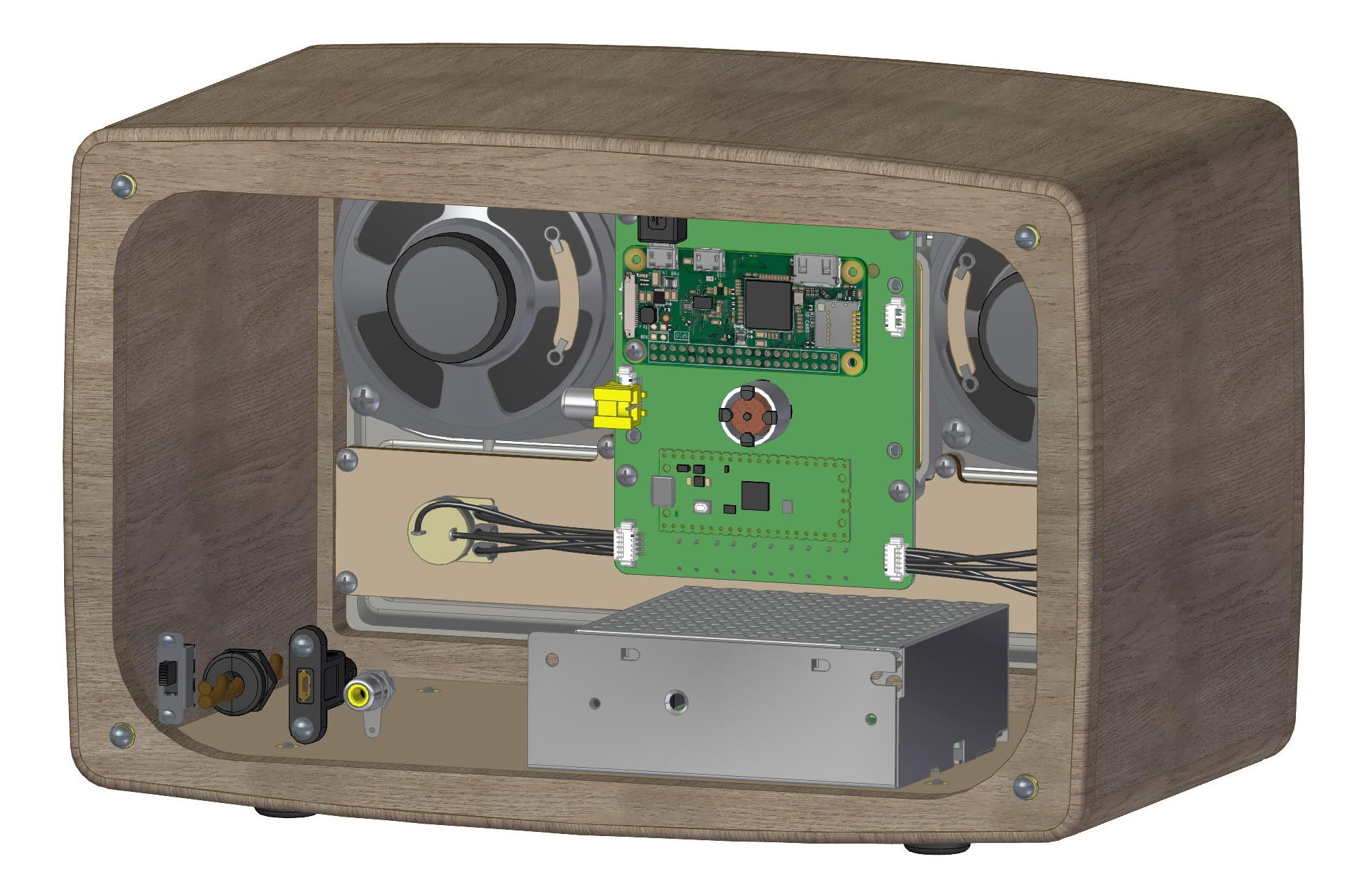 The back panel will have an On/Off switch, a special spiral power cord grip I designed, USB-Micro jack, and a composite video output.

The USB and Composite video will allow me to debug the Pi Zero without having to take everything apart. With some code changes the USB could also be used to expand the Pi storage using an external disk. The composite video could perhaps do some karaoke video feature. I figured having analog composite video out instead of HDMI would be more in the Fallout style. 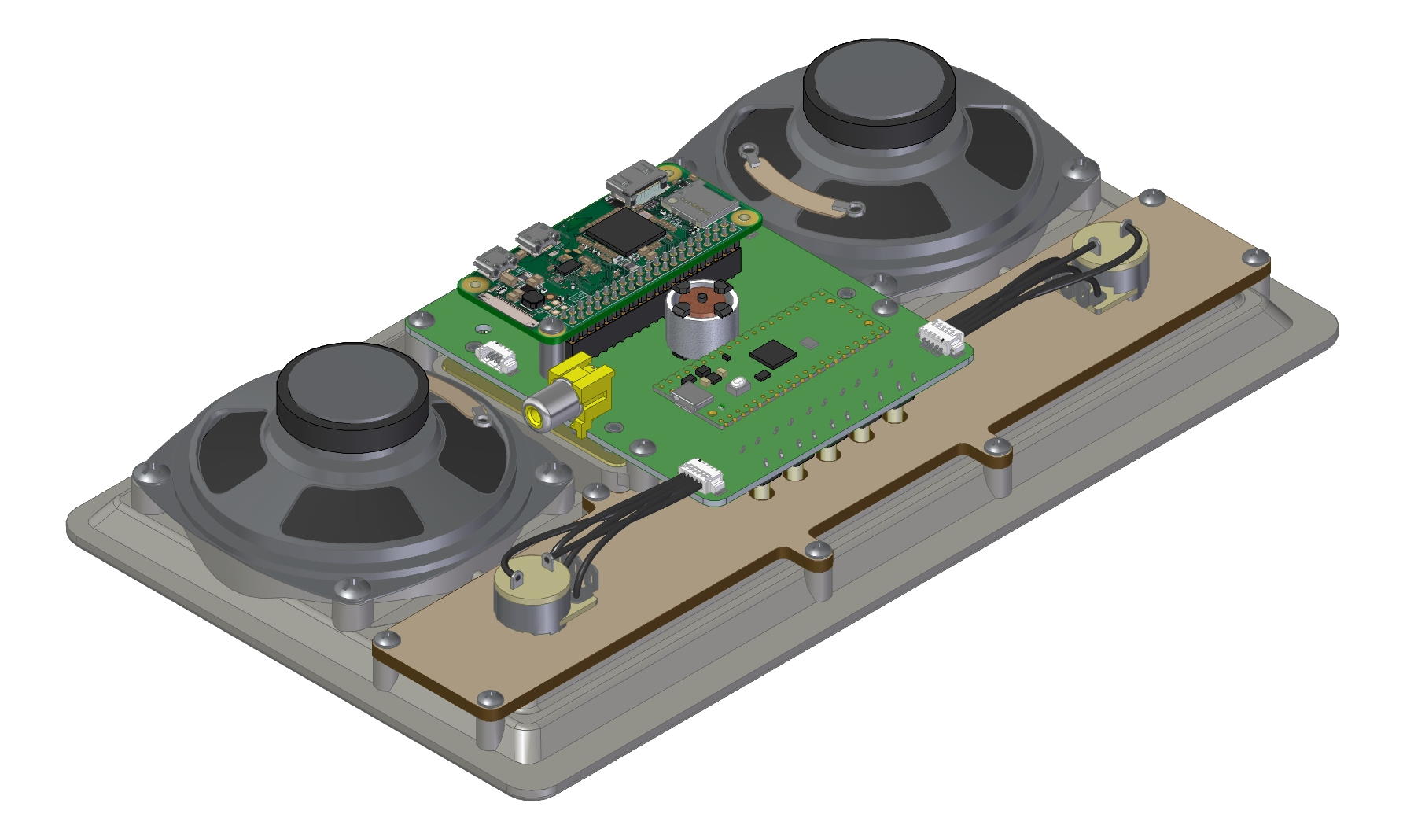 All the parts except for the power supply will mount to a single PCB. The Pi Zero and Pi Pico both will be mounted on headers to allow swapping them out if needed. The air core motor sits in the middle, and the buttons, motor driver and i2s speaker amps will all be housed on the PCB.

Everything then mounts to the faceplate. 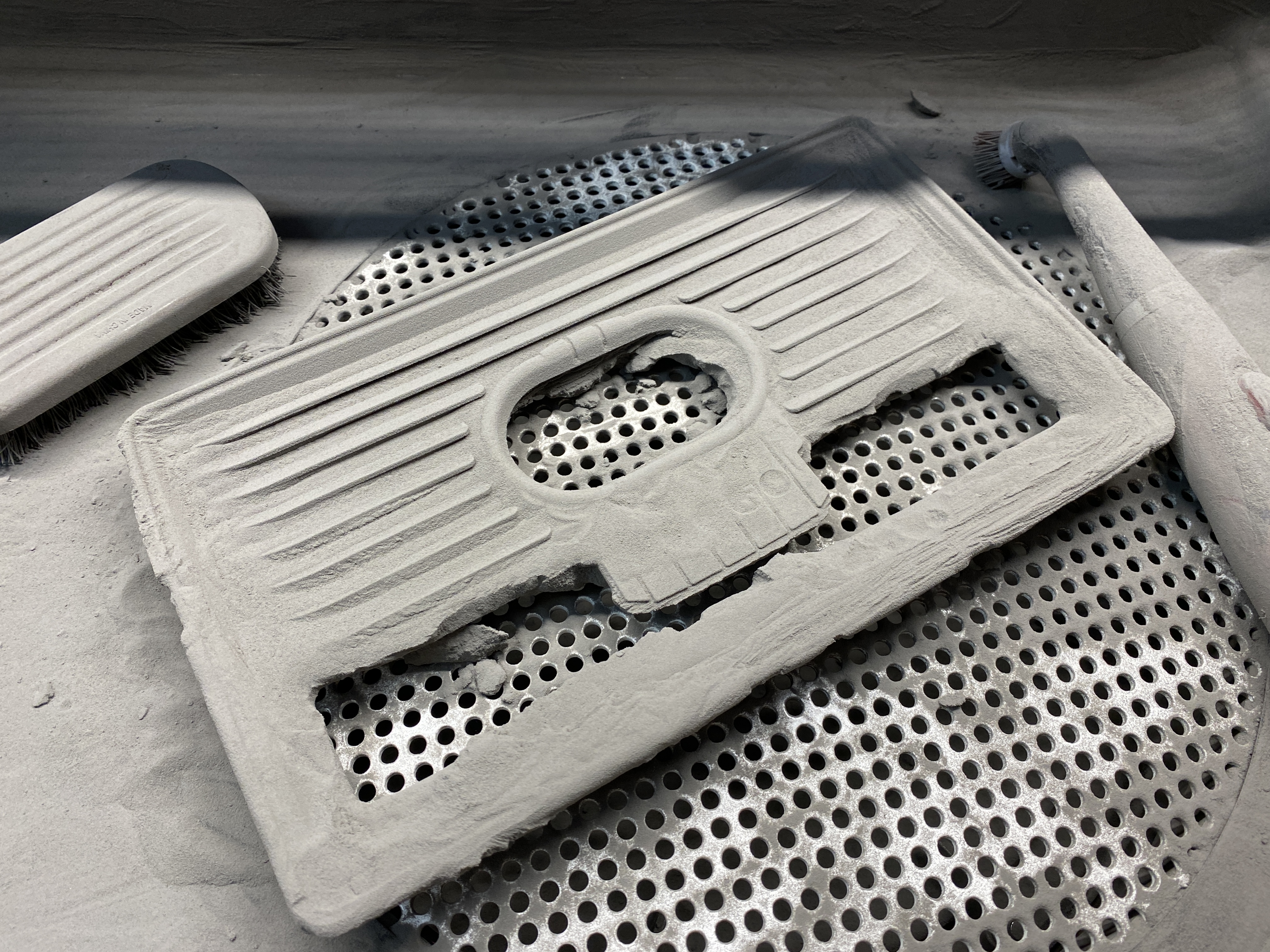 I have already 3D printed a prototype of the faceplate. It is printed on a Form Labs Fuse 1. The Fuse 1 is an SLS 3D printer which means it can print almost any geometry without worrying about overhangs. The parts are ready to use once you clean off the powder. 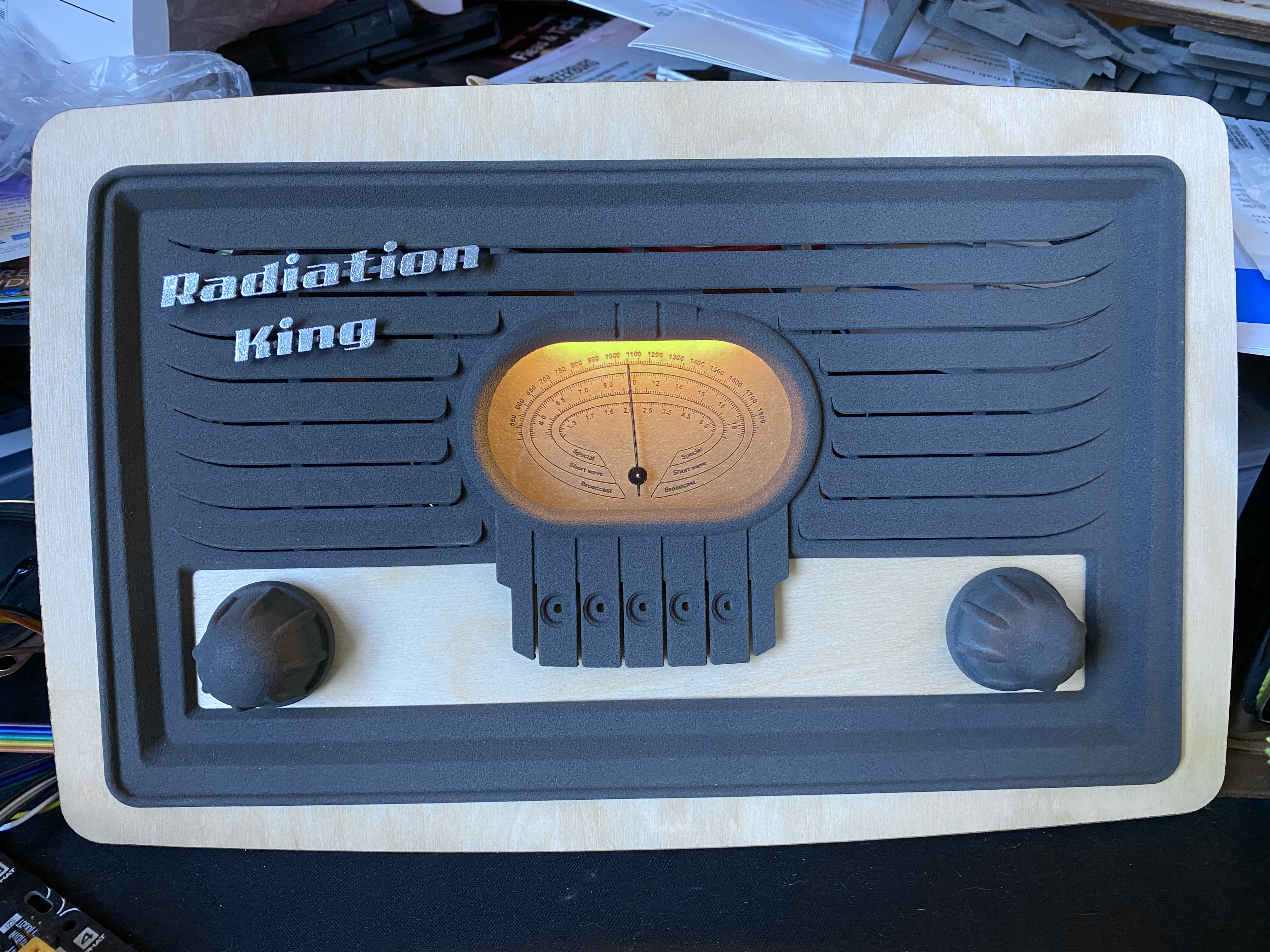 Here it is mounted to my test mock-up. The Radiation King logo was printed a while ago, and was colored with a Molotow Chrome pen. The gauge face is currently just a laser etched black acrylic panel with the paper layer left in place. It will be a acid etched brass plate in the final form.

I also received my Ultrasonic microphone PCB design. It works! Except that CircuitPython's PDM in code has a bug. The bug makes the sample rate fixed at 22.1KHz per channel instead of being variable. I will still go ahead and put the microphone into the design and hope that the software can be updated later to make the mechanical remote work.

Code wise: I have done lots of updates. I now have the Pi Pico connected to the Pi Zero using a single USB connection, with no secondary UART needed. With the Pico connected to the Zero, you only have to load code onto the Zero. The zero then mounts and copies the required code over to the Pi Pico. This makes updating both sets of code much easier. The only catch is they way Linux handles a USB interruption, which means if the Pico is reset you have to reboot the whole thing. I have tried a bunch of re-mounting code, but it never restores the USB storage, and USB UART consistently.

The Zero and Pico also now talk to each other and each has a heartbeat signal to ensure that if one crashes, the other code goes into standby.

Wow, this is looking great! The Radiation King is on my dream project list.

The lit frequency and needle display looks especially great. Are you just using a standard LED for that, or have you made a diffuser/reflector setup? I am currently making a lighting design for a replica WW2 compass and want to achieve a similar look.

RPF PREMIUM MEMBER
I am using a strip of 8 neopixels. You can see them in this image from earlier in the thread.
They are positioned just between the gauge plate and the glass. I was afraid they would be too close to the plate, but they light up the whole area quite well, in fact I run them at about 70% brightness most of the time.

They are also cheap and only take 1 wire to drive. My only gripe with them is that they don't have enough level settings to have them fade on/off without a bit of stepping near the lower levels. These days you can get all sorts of sizes, but I have been just using the pre-made PCB mounted ones. In the Pip-Boy I will probably use smaller LEDs, either tiny Neopixels or regular LEDs with a driver IC.

zapwizard said:
I am using a strip of 8 neopixels. You can see them in this image from earlier in the thread.
They are positioned just between the gauge plate and the glass. I was afraid they would be too close to the plate, but they light up the whole area quite well, in fact I run them at about 70% brightness most of the time.

They are also cheap and only take 1 wire to drive. My only gripe with them is that they don't have enough level settings to have them fade on/off without a bit of stepping near the lower levels. These days you can get all sorts of sizes, but I have been just using the pre-made PCB mounted ones. In the Pip-Boy I will probably use smaller LEDs, either tiny Neopixels or regular LEDs with a driver IC.
Click to expand...

Ah very good. Thank you for providing such detail and the link to the specific LED, I appreciate that 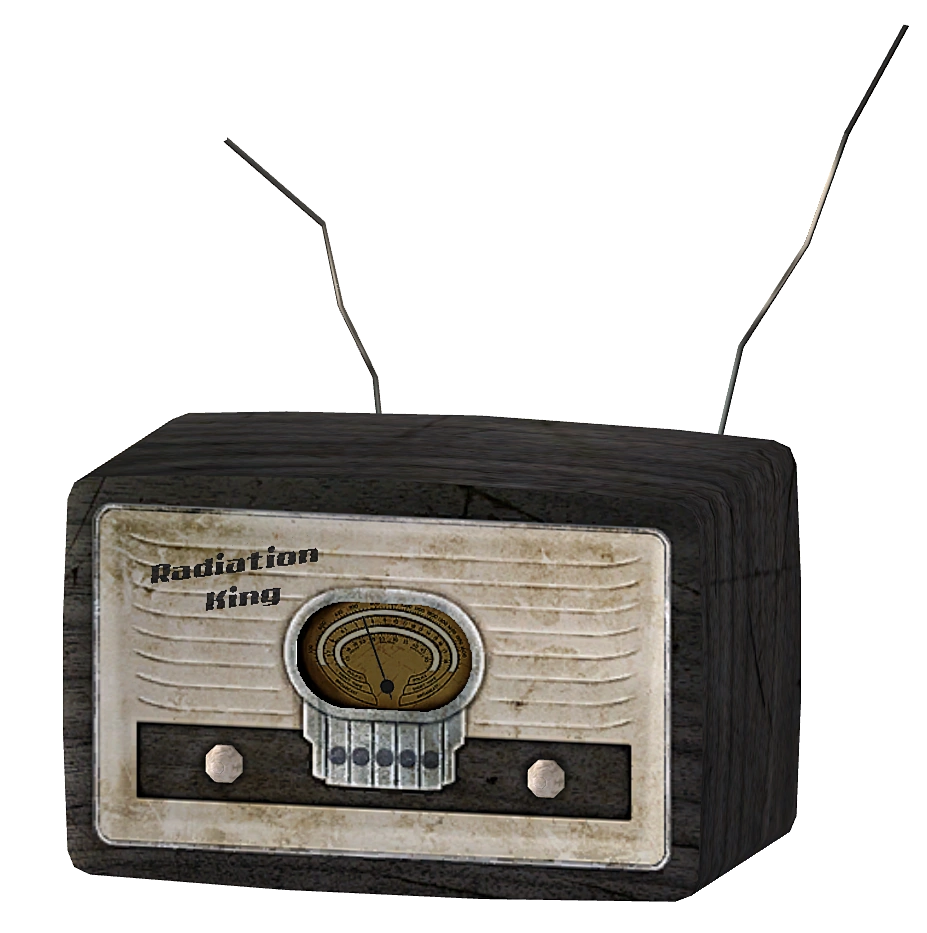 So here is an image of the radio as it was in Fallout 3. Note the more central position of the knobs. The only other difference is that the Fallout 3 version has silver trim around the center "skull" shape and the bezel. I don't know yet if I will try to replicate this. 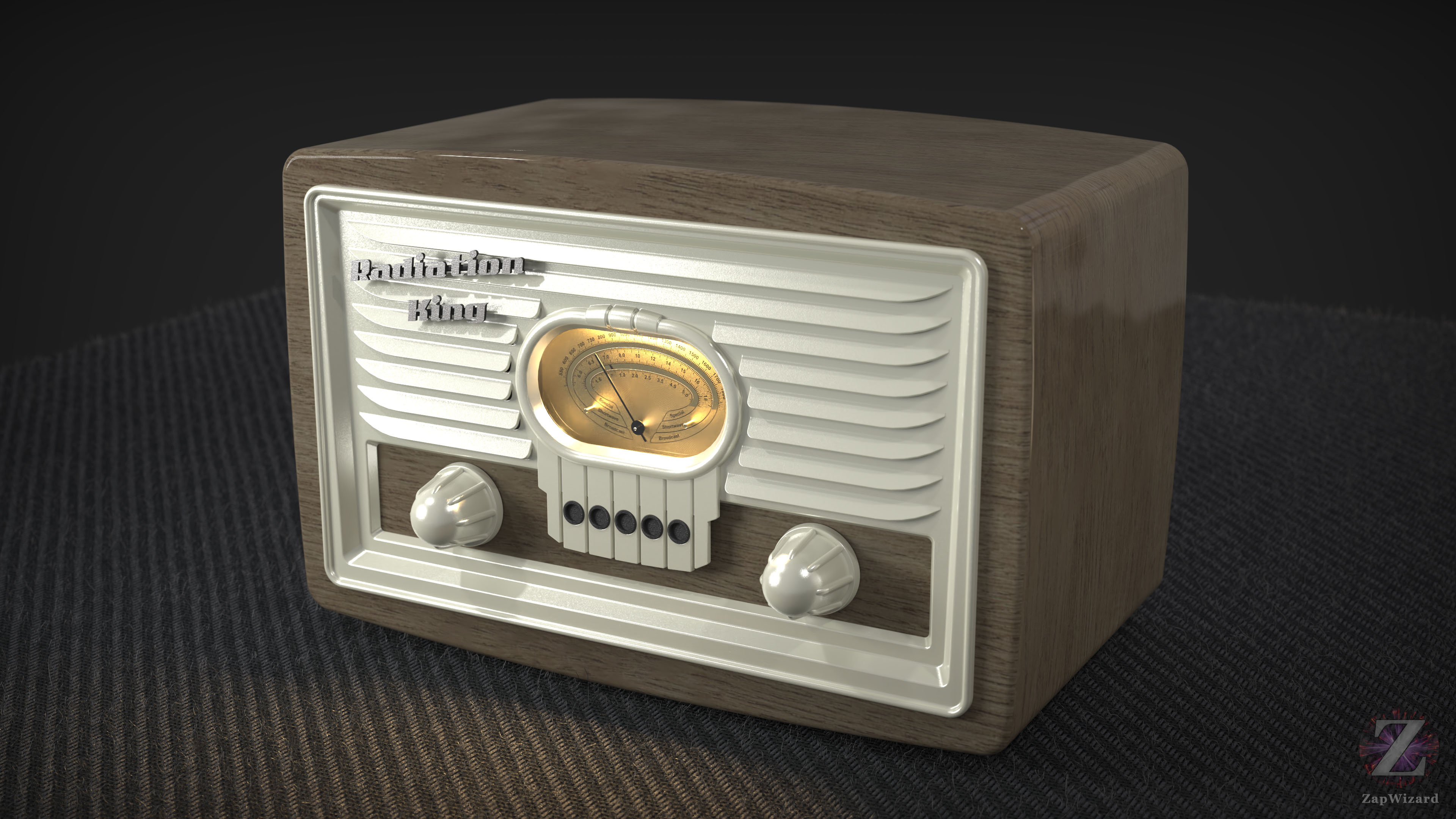 I made a new rendering with the knobs closer to the center. Since the pots are just on wires in theory the panel could be swapped out to put them in either spot.

One more rendering. This time with the silver accents from Fallout 3, and button label inserts.
I like the silver trim, and to re-designed the center "skull" piece to be separate so it will be easier to paint.
I am testing a few different silver paints on prototype parts currently, but so far none look correct, I may need to get a airbrush setup to do it right. 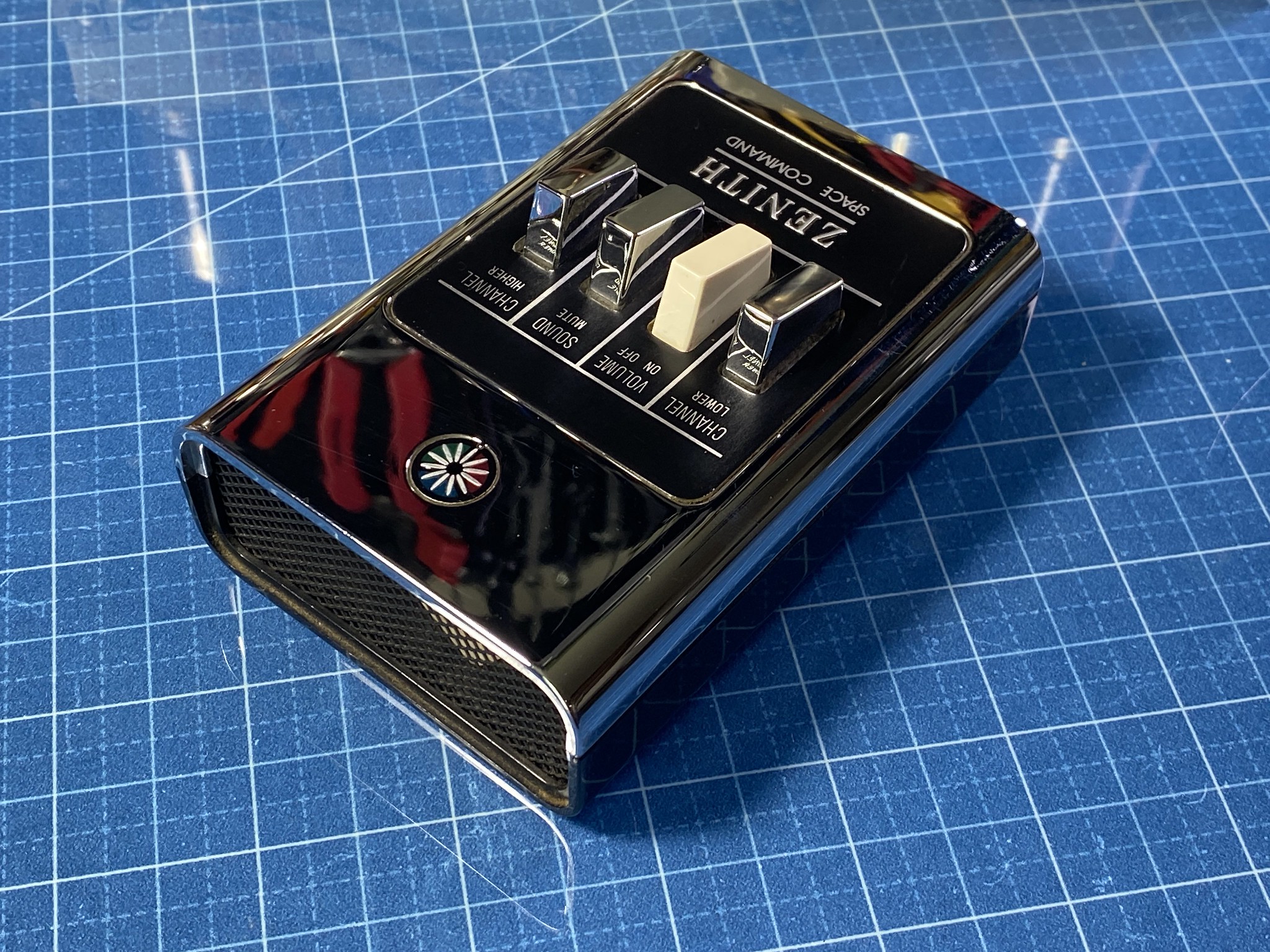 It works! I believe I am the first person to make one of these 1950's remote work with all buttons detected.

There were two bugs in CircuitPython that needed to be fixed. Thanks to the fine folks at Adafruit and the CircuitPython Discord who fixed them. I can now capture PDM audio at 80KHz using my SPH0641LU4H-1 Mems Microphone board.

I was amazed how fast it can capture the samples, and perform an FFT on them. I had to slow down the sampling as it would catch the button ringing and trigger four or five times. Even with the Pi Pico running a few other tasks.

For some reason each button on the remote seems to have three different peak frequencies . I am sure with some windowing and other filtering I could clean up the signal, but for now I am happy the remote works most of the time.

I have the four buttons setup for "Previous Station", "Volume Down / Off", "Volume Up / On", and "Next Station".

To prevent the control knobs on the front of the radio over-riding the signal, when you press a button on the remote, it increases the dead-zone for the potentiometer. If you move a front knob enough, it resets the dead-zone. Thus allowing for dynamic controls without having to put the radio into a special remote control mode.

RPF PREMIUM MEMBER
A video log of all the progress so far. Of course the Ultrasonic remote doesn't want to behave while I am recording video, but there are still some bugs to work out.

RPF PREMIUM MEMBER
I finally put some time into this project. I have a first draft of the PCB done.
After trying a half dozen PCB programs I settled on using CircuitMaker. It has a great 3D viewer and STEP exporting, so I was able to ensure everything matched up between the PCB model and the 3D CAD model.

I need to add connector labels, and in general, clean up the PCB a bit. It is a 4 layer board. The Pi Zero and Pi Pico connect to each other over a USB connection. I managed to find a stack-up of a header an pogo pin set that lets me contact the bottom side of the USB contacts on each board.

The PCB has connectors for the speakers and potentiometers obviously. There is also a Soft_Off button, NeoPixel, and an optional Microphone board connectors. The yellow connector is CVDS video from the Pi Zero just for debugging or possibly karaoke if someone wants to code that. 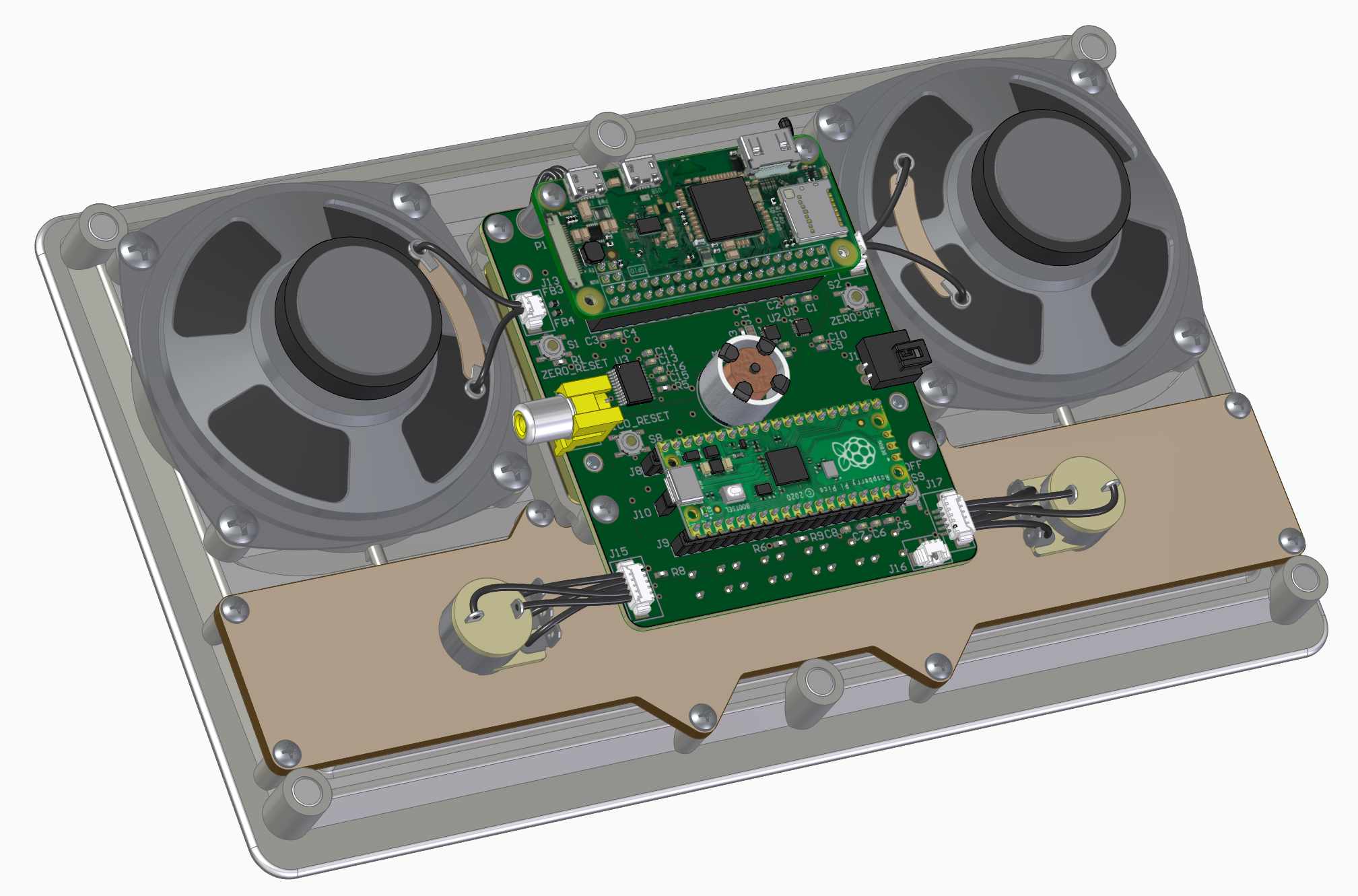 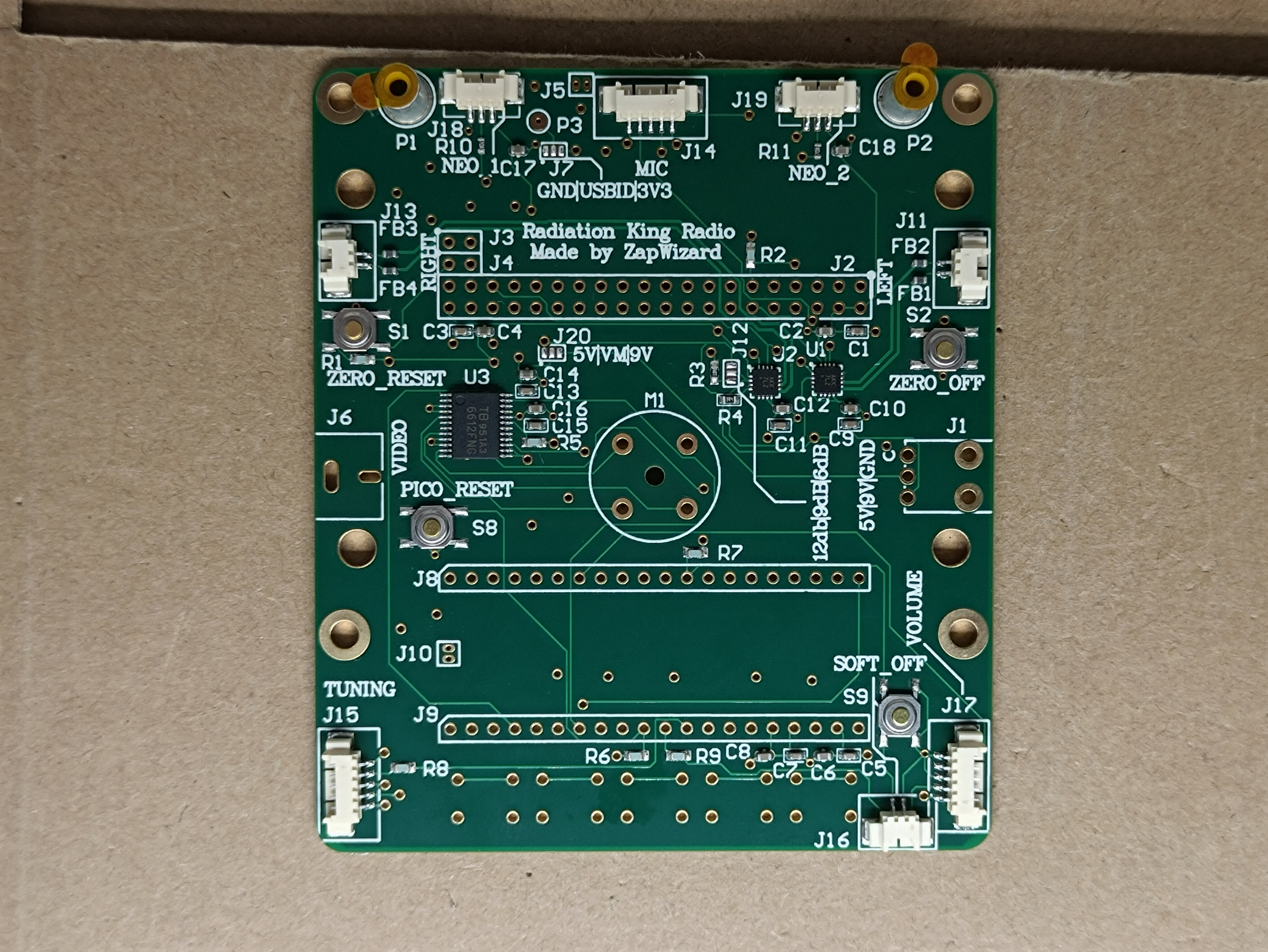 My circuit boards have arrived!

I have to give a special thinks to PCBWay for these. They gave me a good discount on getting these boards made, and they even sourced and populated the SMT parts for me. They even were able to get the motor driver IC that is out of stock at all the US suppliers.
All I need to do is add the though-hole components. They were so far, I am actually still waiting on some of the parts to arrive before I build up the board.

The board itself is four layers, with more time and a less symmetrical layout I could probably get it down to two layers. I designed it in CircuitMaker. You can get the design file here. 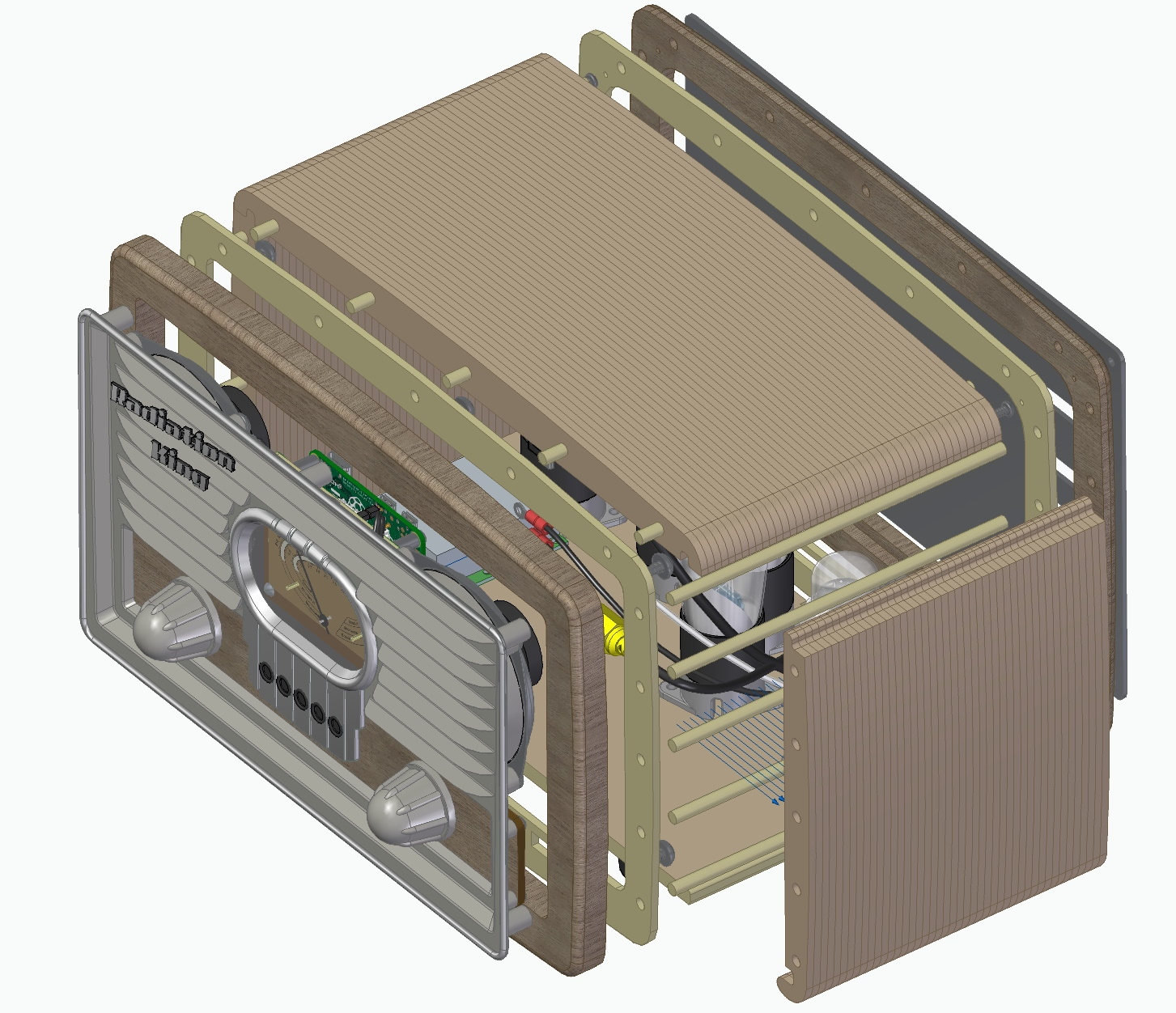 What I ended up settling on was to use lots of layers of laser-cut plywood with dowels to make the main structure. This section will be covered with a thin real wood veneer. 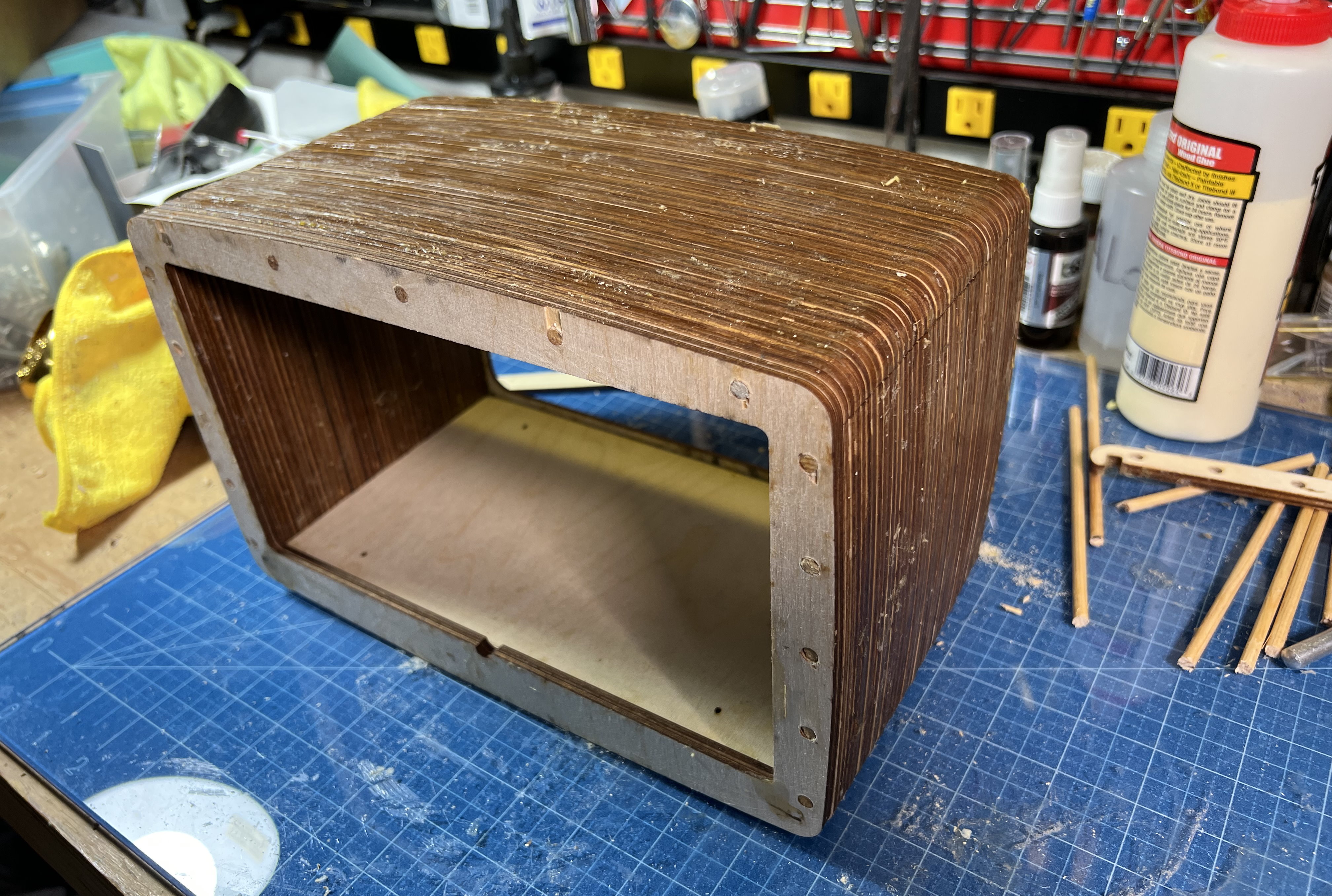 It took a few hours to glue up the 45+ layers together. If I were to do it again I would use 6mm (1/4") plywood to save on the total number of layers. 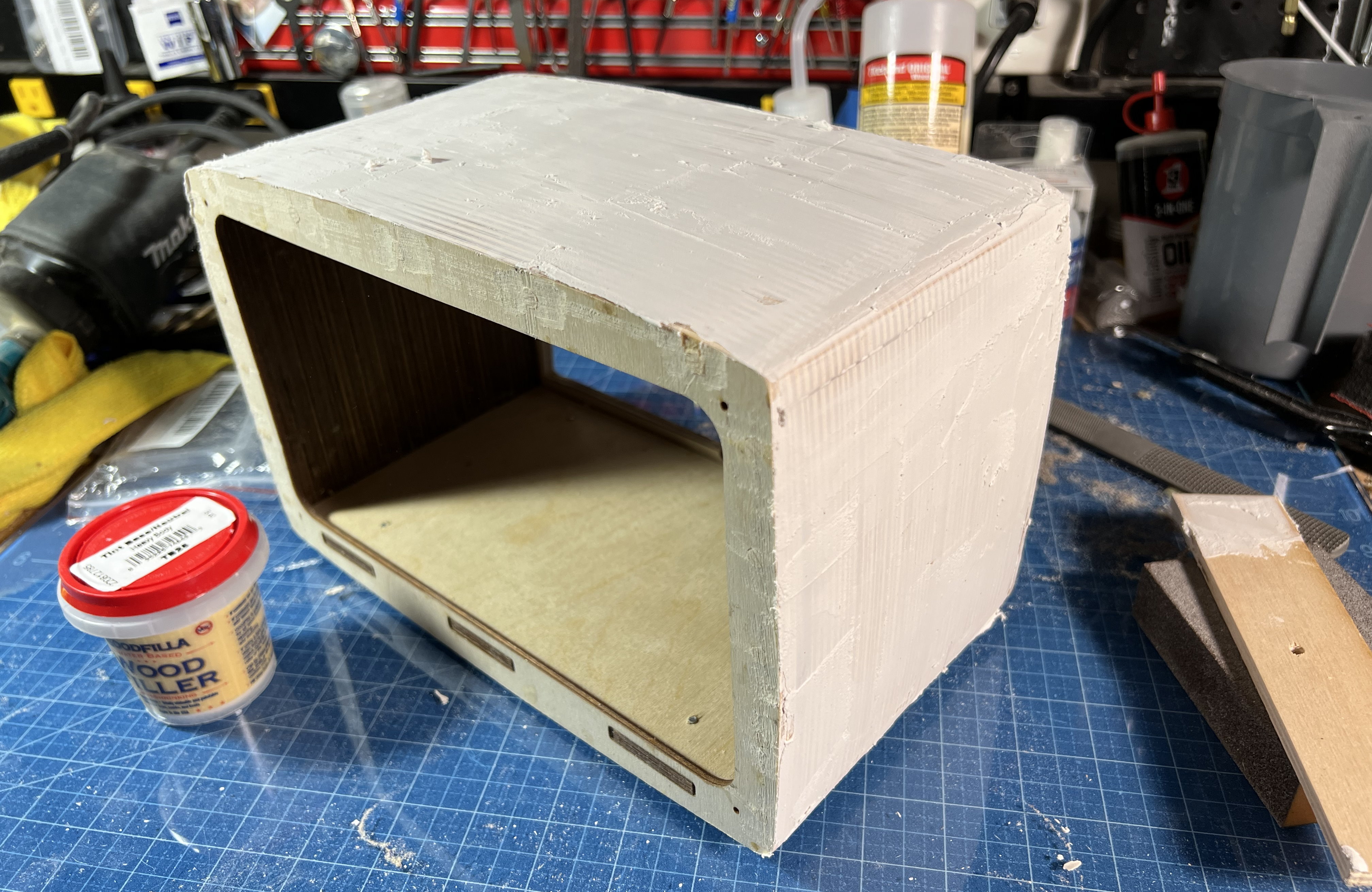 I then waited 24 hours to the glue to fully cure. I used a belt sander to remove all the glue and the laser burnt edges. I then slathered the surface in wood filler (I smoothed and removed most of it after taking this photo)

Once that fully sets I will sand and paint the surface with a filler primer. This will then become the base that gets wrapped with the veneer.