Y-wing Number One" - Master Pattern / Hero Buck up for auction

Did not know this existed

"Y-wing Number One" - The first 3-dimensional Y-wing ever built, being the pattern which created all other Industrial Light & Magic Y-wings for the original Star Wars and Return of the Jedi.​

RPF PREMIUM MEMBER
Yep, I restored that
The Y-Wing master pattern (bottom and bottm neck) was in my house for all two years of the lockdown! And it is dimensionally fascinatingly different from all fan kits and interpretations. Really cool stuff and an honor to research and preserve.

I thought Dave Beasley was the first to "realize" the Y-Wing model into physical form from blueprints, Colin Cantwell's early ship design, and Ralph McQuarrie's revised paintings based on Joe Johnston's revised sketches for the Y-Wing design. Did HA get it right in saying it was Paul Huston who first made the Y-Wing? Or is this in error? Please clarify. 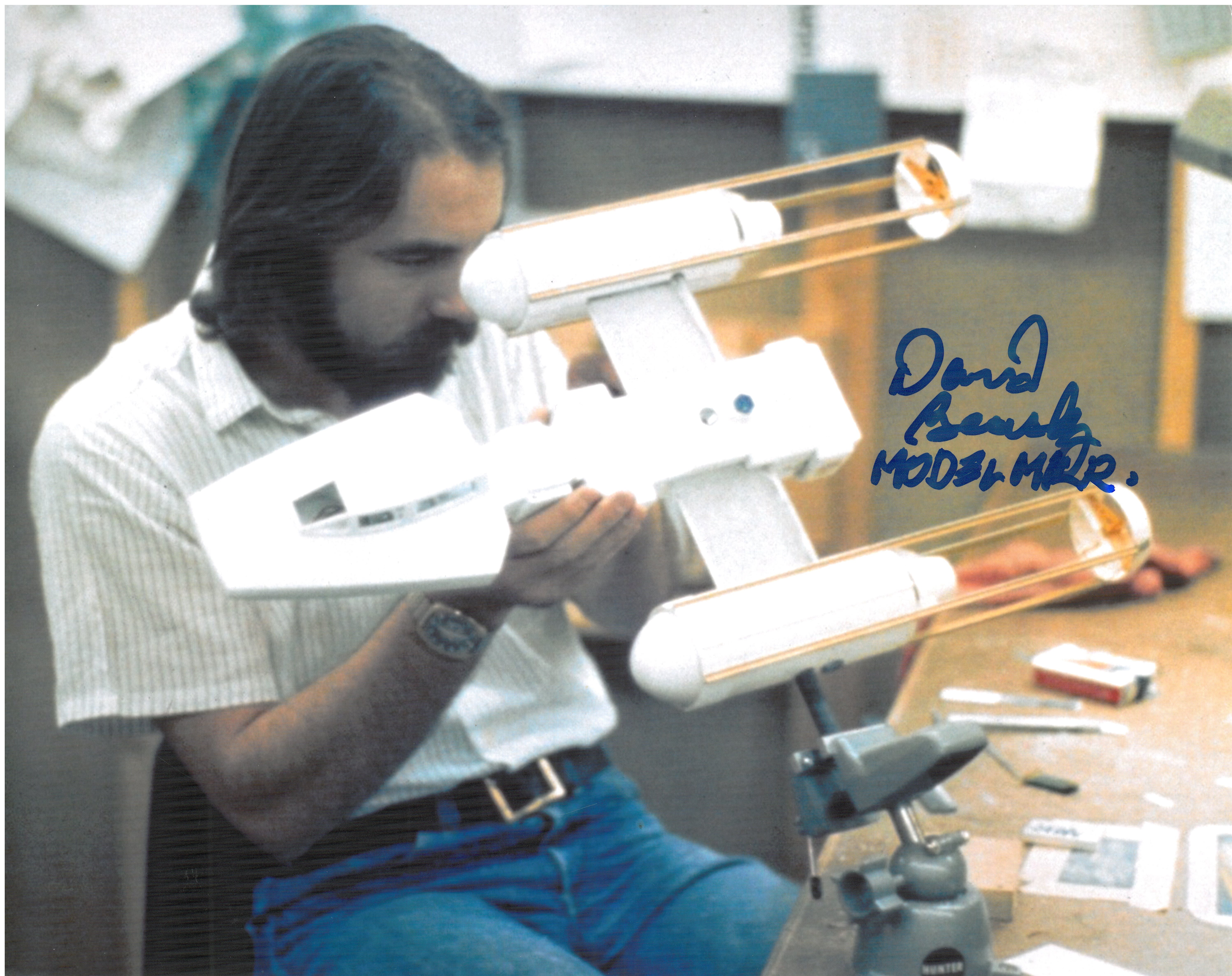 RPF PREMIUM MEMBER
First off I know this sounds disingenuous, but this info is mostly based off photos (which I sadly cannot provide) which clearly show this model from it's very first moments and onward... that Beasley pic is a snap from the design in the process. What I *do* know, from most of these pictures, show moments Fall 1975.

Jim Mallasch, a McCune hire who worked in wood making patterns for Detroit Auto, working on the Y-Wing armatures and what look like vacformed shells from the naked wooden pattern. That vacformed shell, which I think *may* be what amounted to a mock up body, is what Beasley is shown with. It has smaller engine domes. Unsure if any had that brass T in the end.

There is also a photo from a *different* ILMer showing a stack of these Y-Wing vacform bodies all assembled in a corner, later in '76. I have posited that this was perhaps the first idea (to use vacformed shells with plant on parts), before they switched to a faster build iteration using castings with parts already in situ.

Then there are pics of Jones and Mallasch with the armatures but now the body is a resin shell with all parts cast and present. Based on the sequence, and details/access points, this is Gold Leader.

So, we know Mallasch was let go right at the end of '75, for being too "slow" for production speeds.
We know Huston took over Y-Wing duties, as we asked him for back story on the pics a couple of years ago and that's what he said.
To add color to this little oral history, Lorne said he didn't touch the Y builds because they didn't appeal to him . Love it.
We know Beasley and McCune worked on the patterns as there's printed public pics of them doing so.

Who did the actual parts plant-ons? Possibly Mallasch? (Mallasch passed in the 90s I think I recall). Huston remembers doing some. Haven't asked Beasley, Jones def worked on it. McCune did too.

From the study of the parts I restored, and holding production castings from ILMer's closet keepsakes, this is how the Y-Wings were built:

Pattern was styrene donors and shapes, glued to a wooden buck made from many pieces of laminated and faceted wood, which was primed a very dark grey/black. Then once parts were glued down, it was primed a medium grey.

Hero Y-Wings had machined acrylic and metal armatures with mounts in the front underside of the head/neck, engines, top, bottom. Some were plumbed for lights. All had the engine exhausts integrated in place - styrene, machined acrylic.

Artoos used in Y-Wings were shorter than the X-Wing plugs, most likely from the same pattern.

Resin castings for the body were top and bottom body, top and bottom neck, butt plate, the back bulkhead of the head, head casting included a hand carved recess for the canopy to key to, and the cockpit was part of the top head casting. The head castings tended to run thin, apparently. There were cast detail plates all over the thing too, some acted as electrical port covers. Some stuff was from larger pattern plates also on other builds.

We have been told that the canopies were in-house injection plastic too? We *do* have examples of the engine plant ons, the guns (also used on the Death Star Turrets and even the Galactica Viper), and the egg "clamps" also used on the Falcon. So can't confirm the canopy was and I tend to think they were cast resin...

So I'd say Huston being on the first Y is accurate yes, I think he was lead.

TFS with us these valuable infos Jason

RPF PREMIUM MEMBER
Thanks Jason, that IS very helpful and informative. Bummer you can't share those pictures, I'd very much like to see them. What does Heritage Auctions expect the hero pattern buck pieces to sell for? I didn't see an estimate on their auction page.

RPF PREMIUM MEMBER
Thanks Jason. What a fascinating read and history that was.

So, we know Mallasch was let go right at the end of '75, for being too "slow" for production speeds.

If I was ever involved with a movie, that's exactly how my name would be mentioned.

RPF PREMIUM MEMBER
"So we know Eaton was let go at the end of '75 for being WAY too into it, and also he was two years old" would be mine

RPF PREMIUM MEMBER
Yeah, but man could that toddler build models! He was slow, but dang impressive!

RPF PREMIUM MEMBER
I can share some pics now that the auction is over!

The exhilirating and terrifying moment I realized the bottom was the pattern. 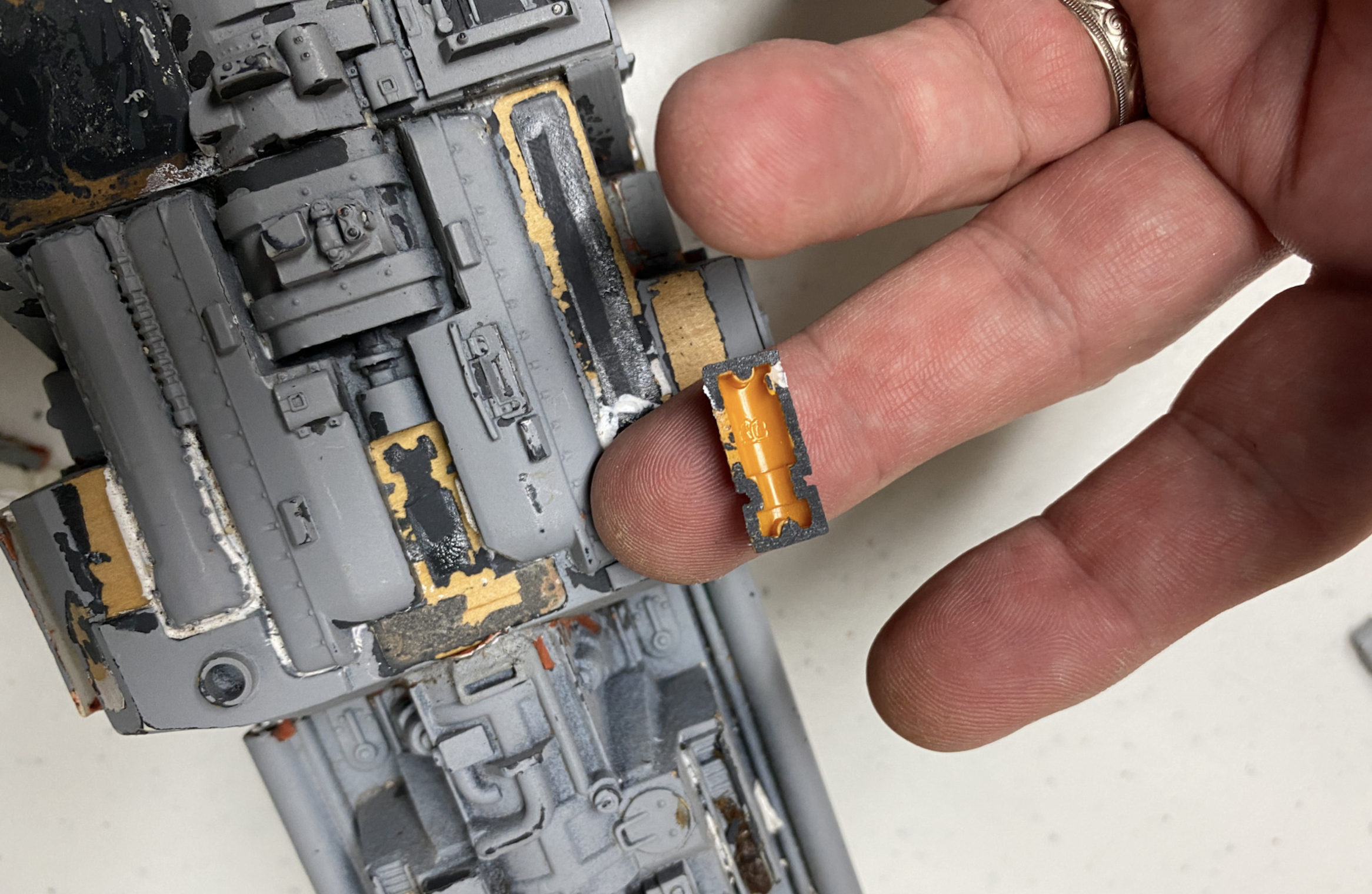 Scanned so I can make a correctly shaped "buck" to repattern: 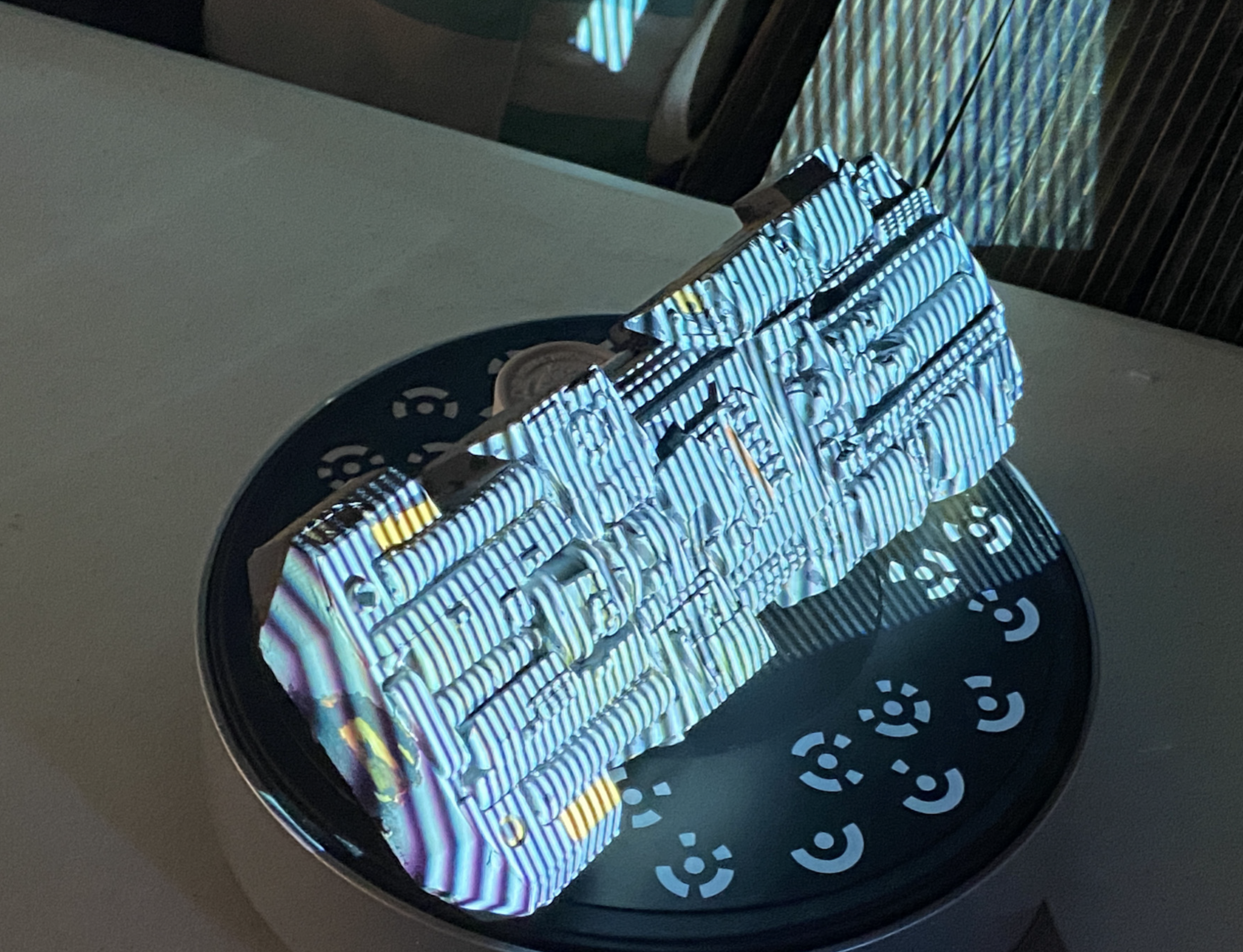 Comparisons of the fan casting to the master pattern: 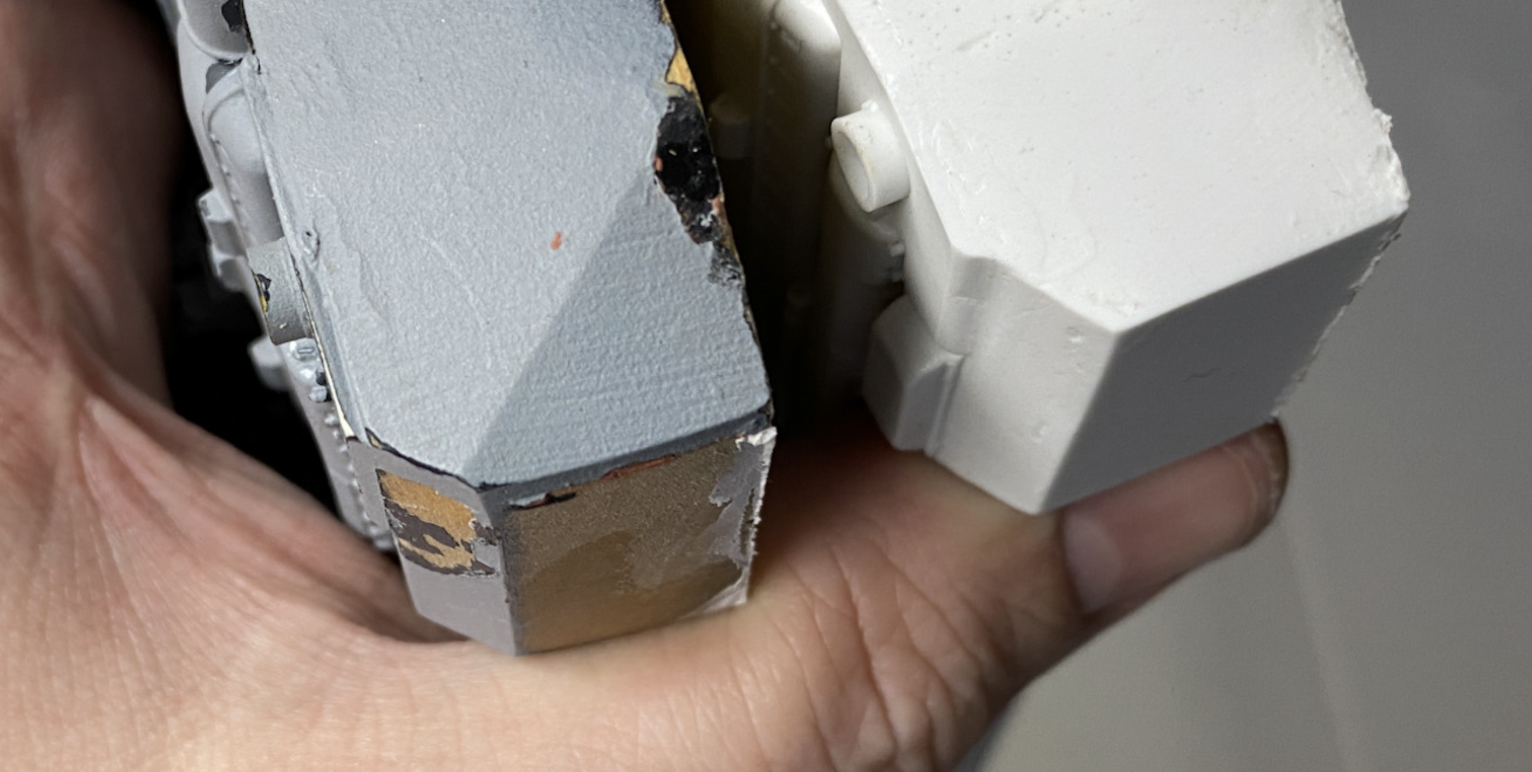 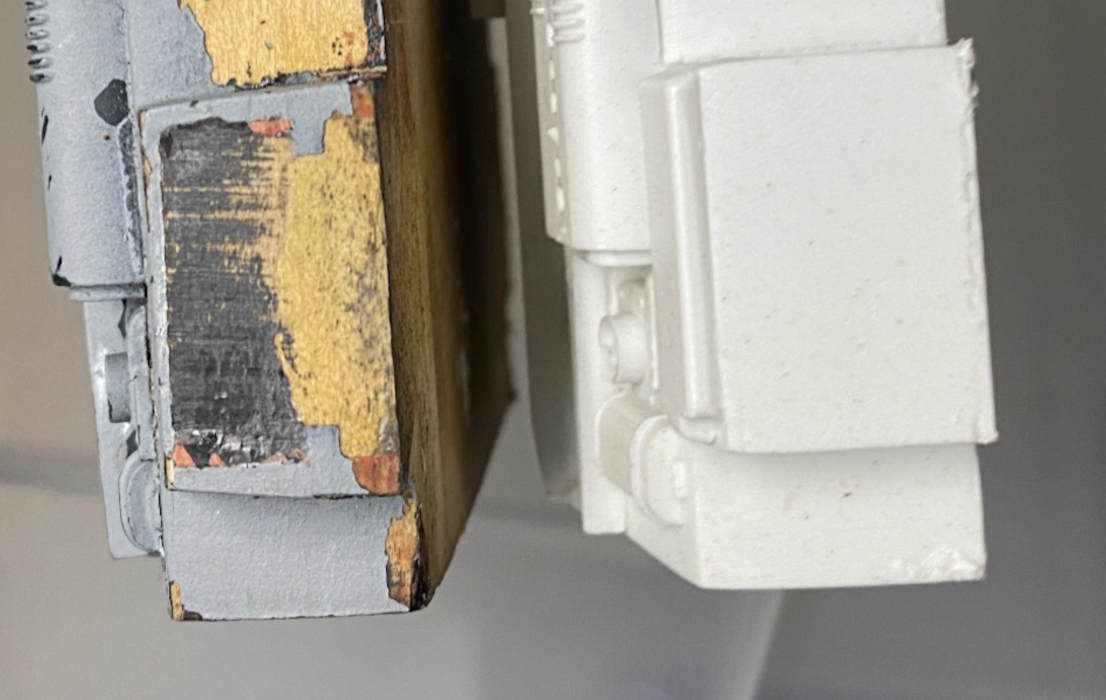 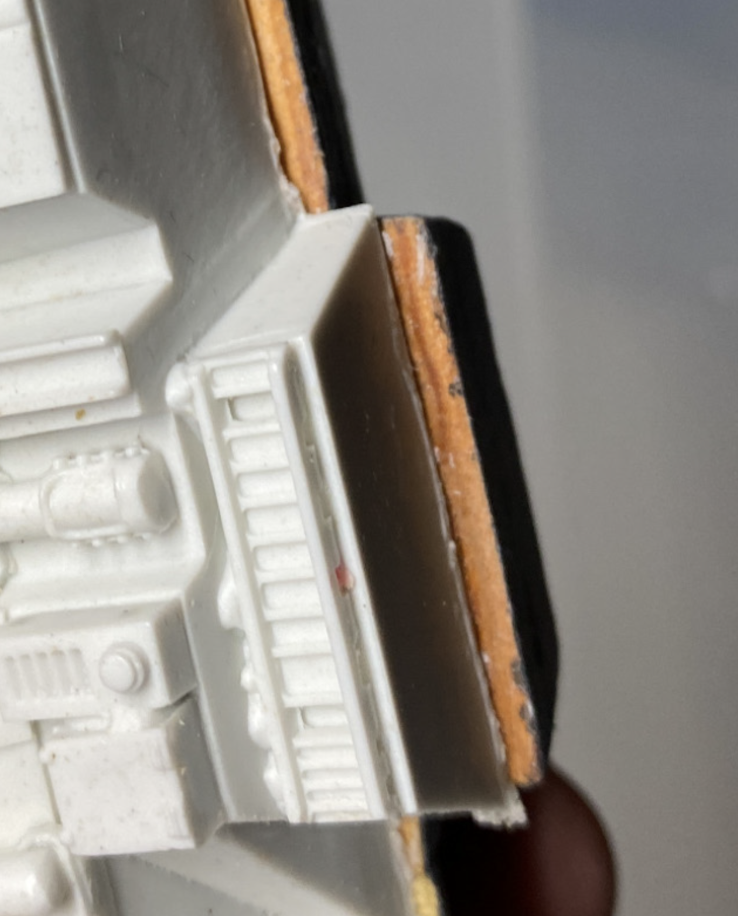 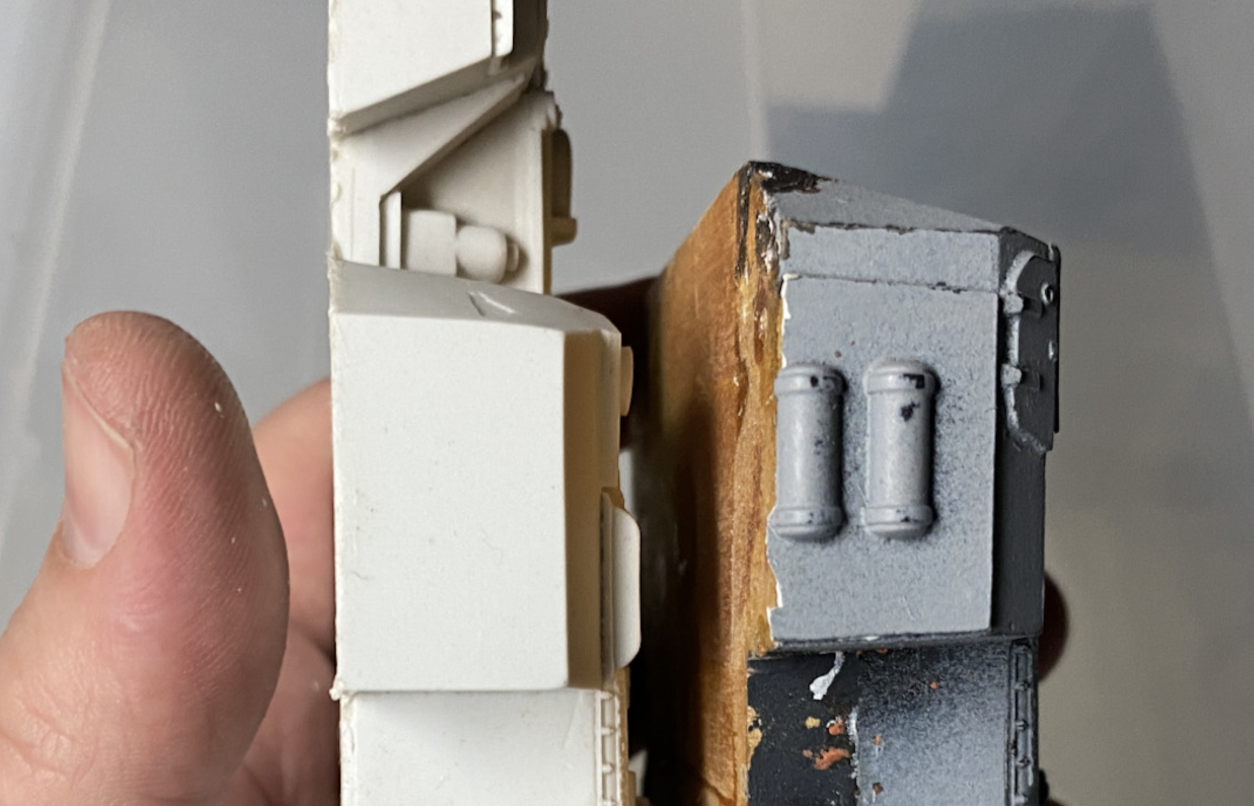 moffeaton said:
"So we know Eaton was let go at the end of '75 for being WAY too into it, and also he was two years old" would be mine
Click to expand...

RPF PREMIUM MEMBER
Shoot. Was just about finished with with fuselage halves in Fusion 360. Then this happens. Have a few edits to make now...

Thank you for sharing!

Say, would anyone have any knowledge about how to recreate that rigid, lightweight foam casting resin that they used?

I thought Dave Beasley was the first to "realize" the Y-Wing model into physical form from blueprints, Colin Cantwell's early ship design, and Ralph McQuarrie's revised paintings based on Joe Johnston's revised sketches for the Y-Wing design. Did HA get it right in saying it was Paul Huston who first made the Y-Wing? Or is this in error? Please clarify.

Was thinking about this picture. Can anyone be sure that those tees are brass? Could they be tan colored ABS?

Flintlock said:
Shoot. Was just about finished with with fuselage halves in Fusion 360. Then this happens. Have a few edits to make now...
Click to expand...

This is the way!

Flintlock said:
Say, would anyone have any knowledge about how to recreate that rigid, lightweight foam casting resin that they used?
Click to expand...

From what I have seen ILM used male and female molds to do these. They were probably fibreglass, silicone or urethane rubber.
Pour into the female mold cavity and then close with the male mold from above. 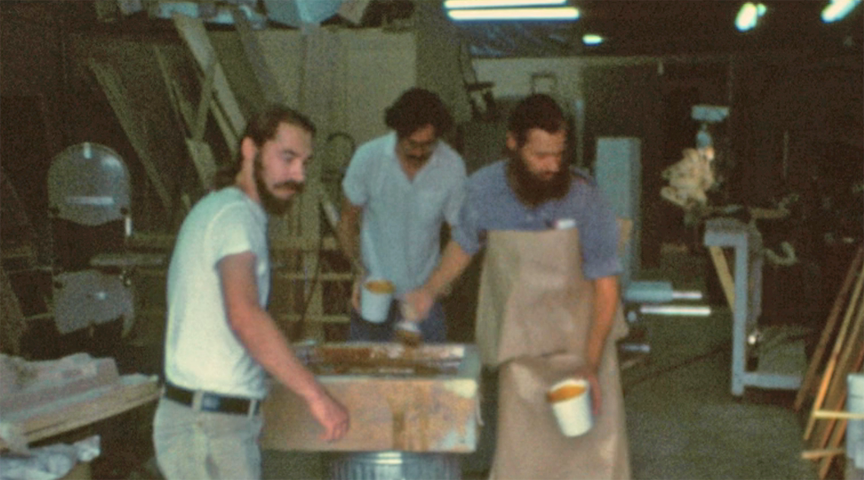 It takes some practice to know how much foam to use. And in general the whole process takes a bit of practice to master.

The foam can create a lot of pressure so the mold usually needs to be open with risers or an opening to avoid deformation of the mold. Or backed up in a box and filled.

Ah! Okay, it's just a product. I was thinking maybe it's some kind of additive to regular casting resin.

RPF PREMIUM MEMBER
Talking to Jon Erland and Lorne, they were specifically initially hired because of their expertise in casting, and tasked iwth casting the Death Star tiles. The tasks ILM had to do became so numerous however, that they quickly moved over to model making, and the tile castings were farmed out to a local shop that also had experience in industrial scale casting. And no, that "lead" is a dead end so there isn't a cache of tiles at some old 3rd party shop. That was the first thing I checked as did probably dozens before me

How Much Do You Clean Up Kitbash Parts?