RPF PREMIUM MEMBER
What's puzzling about the Disney Luke is that it has many differences from the Black Series, but has enough in common to suggest they had a mutual starting point in the production process. It seems inefficient to me that one production run did some reinventing of the wheel, re-doing the perfectly fine work of the other, but these things happen.

I do not have the original Black Series Luke, but from photos I've seen it's exactly the same as the Wedge that I do have, except for deco of course.


Differences in no particular order:
1. The bump on the sides toward the back: Black Series Wedge is taller, Disney Luke is more defined. The bump on the originals is from vacuforming over a round-headed screw that exists on the APH helmet. They hold on a strap that goes around the back of the neck. Due to the vacuforming, the original bumps were more gradual (replicated on my conversion).
2. The bump on the sides just behind the boxes: on an APH, these are attachment points for the oxygen mask. They are held on by a rivet, which is the bump behind it. Again, the bump is more subtle on the vacuformed props. The rivet is centered along the part on the APH. On both replica helmets, the bump is not centered, but are off-center in opposite directions. The bump is missing altogether on the wearer's left side of the Black Series.
3. More on these boxes: the Black series is about the correct width. The Disney is a little too narrow. They are both too tall, however: Black series is about 1/16" too tall, and the Disney 1/8" too tall compared to the APH part. Also, the holes are bigger and spaced closer together on the Disney---the Black Series is more accurate in that respect.
4. The activation button for the sounds is concealed in the box on the wearer's right for the Black Series; wearer's left on the Disney.
5. The Disney lacks the extra strip of plastic on top of the mowhawk.
6. The boxlike cap at the front of the mowhawk is smaller on the Disney.
7. Chin cups: Black series has bumps both above and below the strap. (Onscreen there is only an upper one.) Disney has no bumps.
8. The interior shells are different. The Black Series has molded detail suggesting a quilted pattern. The Disney is smooth plastic. The locations of the battery compartments and speakers are also different. It would be interesting to compare the PCBs inside, but I haven't disassembled them.
9. Disney Luke has silver weathering "paint chips", suggesting the helmets are supposed to be metal, which is not true even in-universe I don't think. They certainly didn't use silver weathering on the props.
10. Black Series visor is fixed in lowered position. Disney visor is retractable.

Overall the Black Series is superior, but most of the Disney deficiencies are minor, and it has a big plus in the form of the retractable visor, and being currently more obtainable in the first place.

(These have my own weathering on them, for good or ill---the released products are much cleaner.)

Nice write up. I was finally at Batuu East at the same time they had helmets in stock a couple weeks ago so I finally got one. I had not really compared them. The retractable visor is really nice for someone like me who has a prominent nose bridge. So it’s nice not to have the visor adjustable so it doesn’t rub.

At this very moment, I am 3D printing a new chin cup for the Disney version, besides the missing bump, I think it looks a little shallow.

The Disney being the one you can buy in kiosks at the park?

I asked the guy working the kiosk at "Batuu West" (love the term, MJF) - was there while seeing my perform - if it was essentially the same as the BS. He seemed to be "in the know", but non-committal". Answered with wishy-washy responses...

PHArchivist said:
The Disney being the one you can buy in kiosks at the park?
Click to expand... 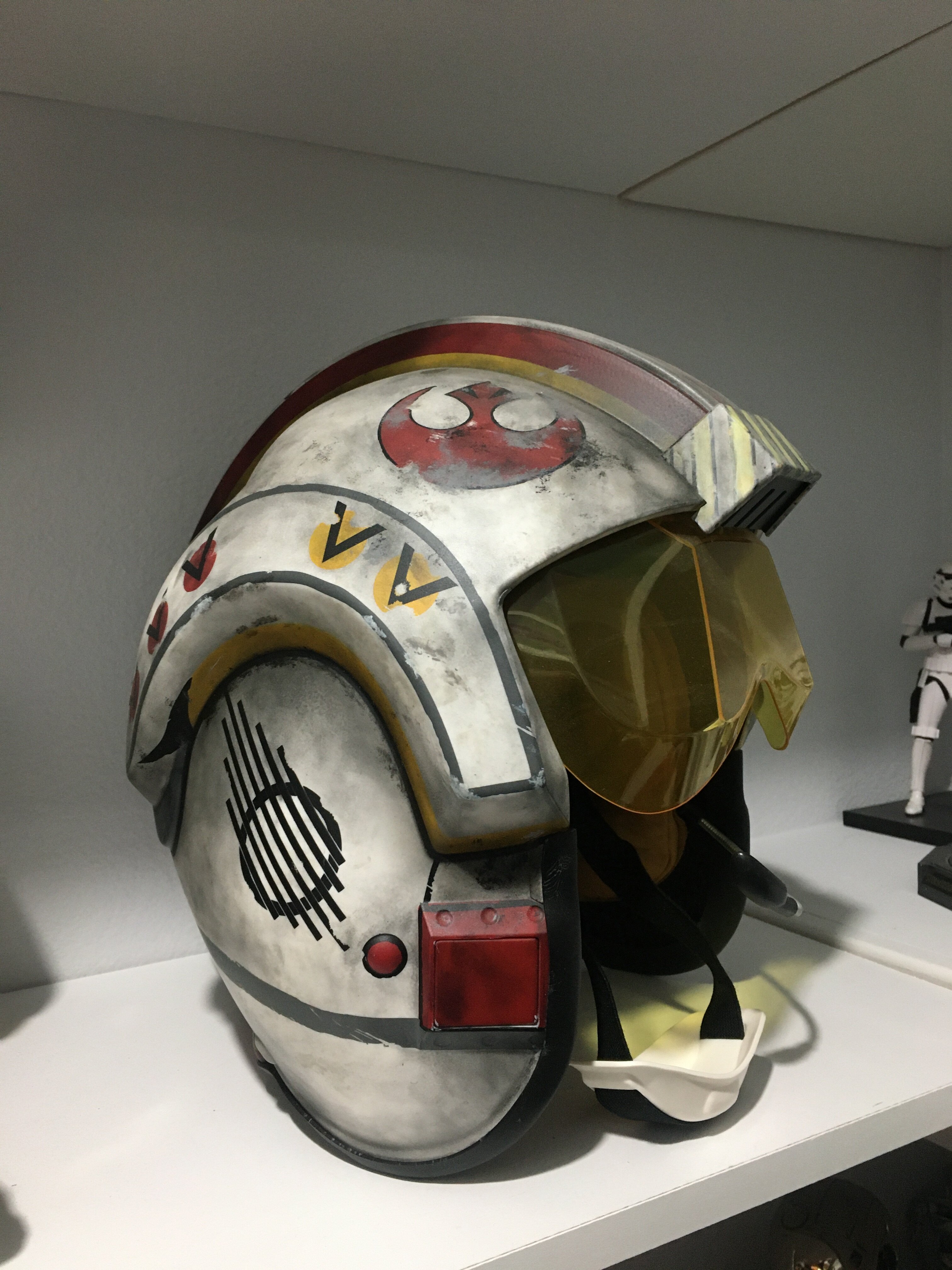 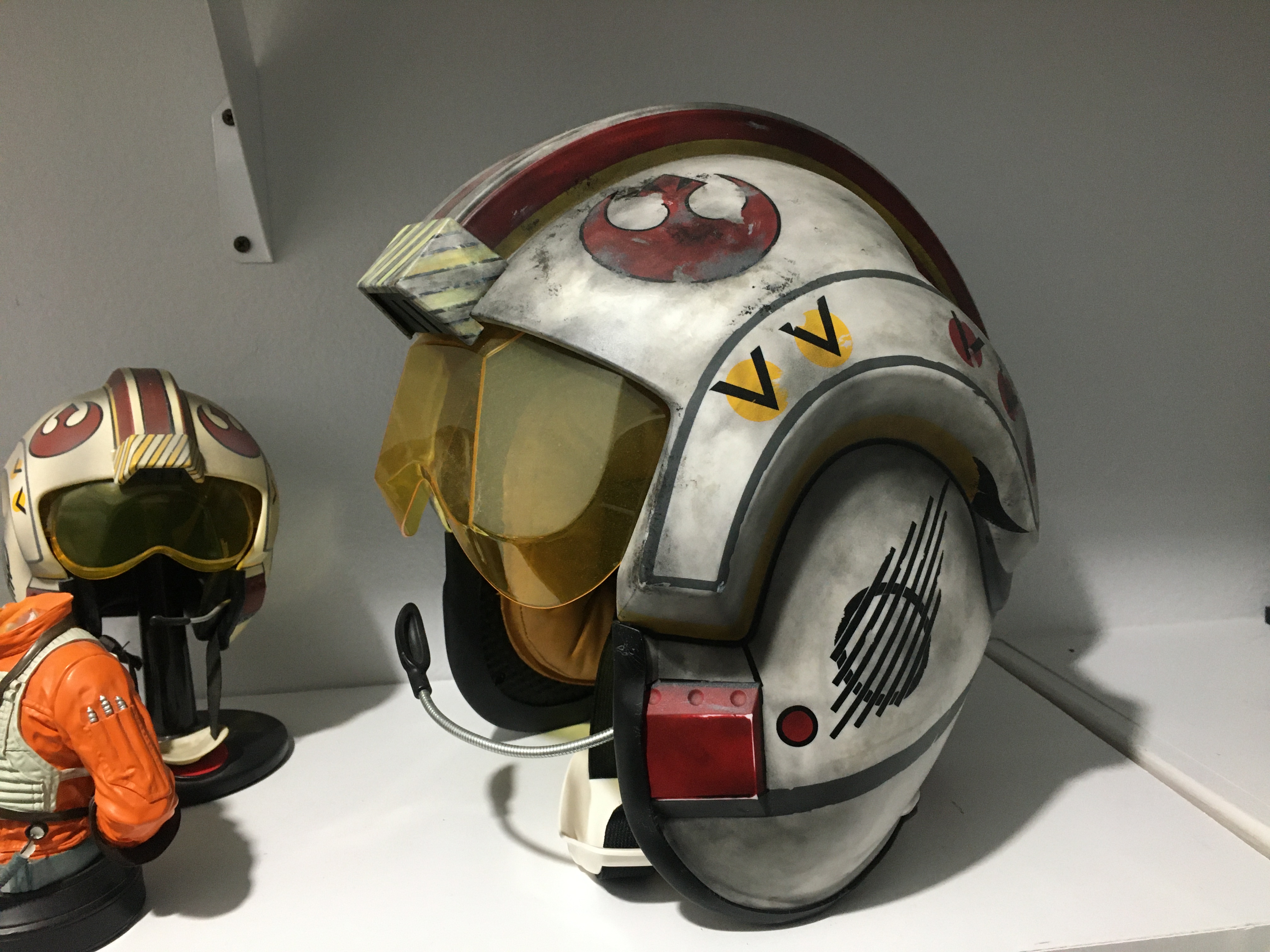 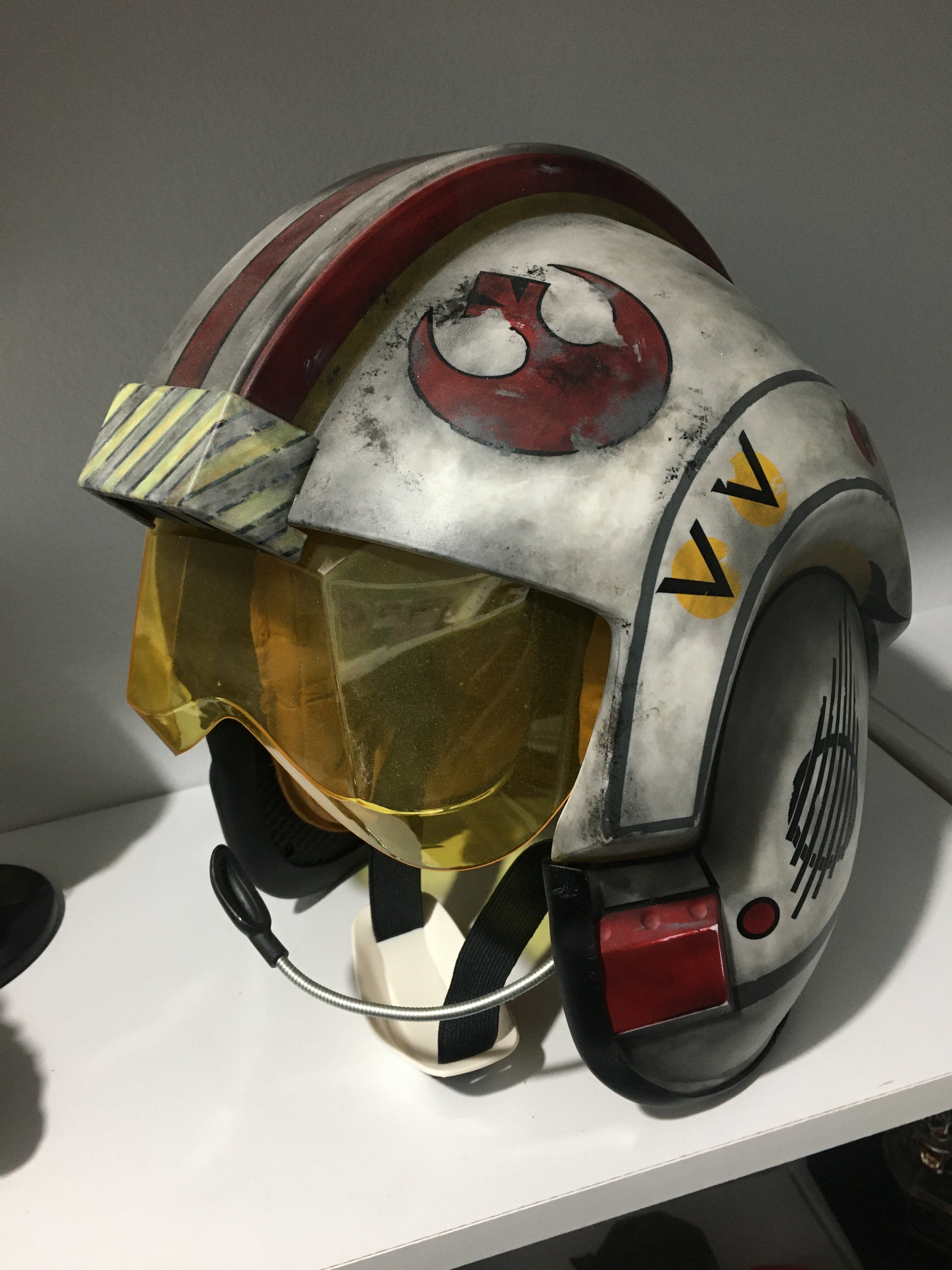 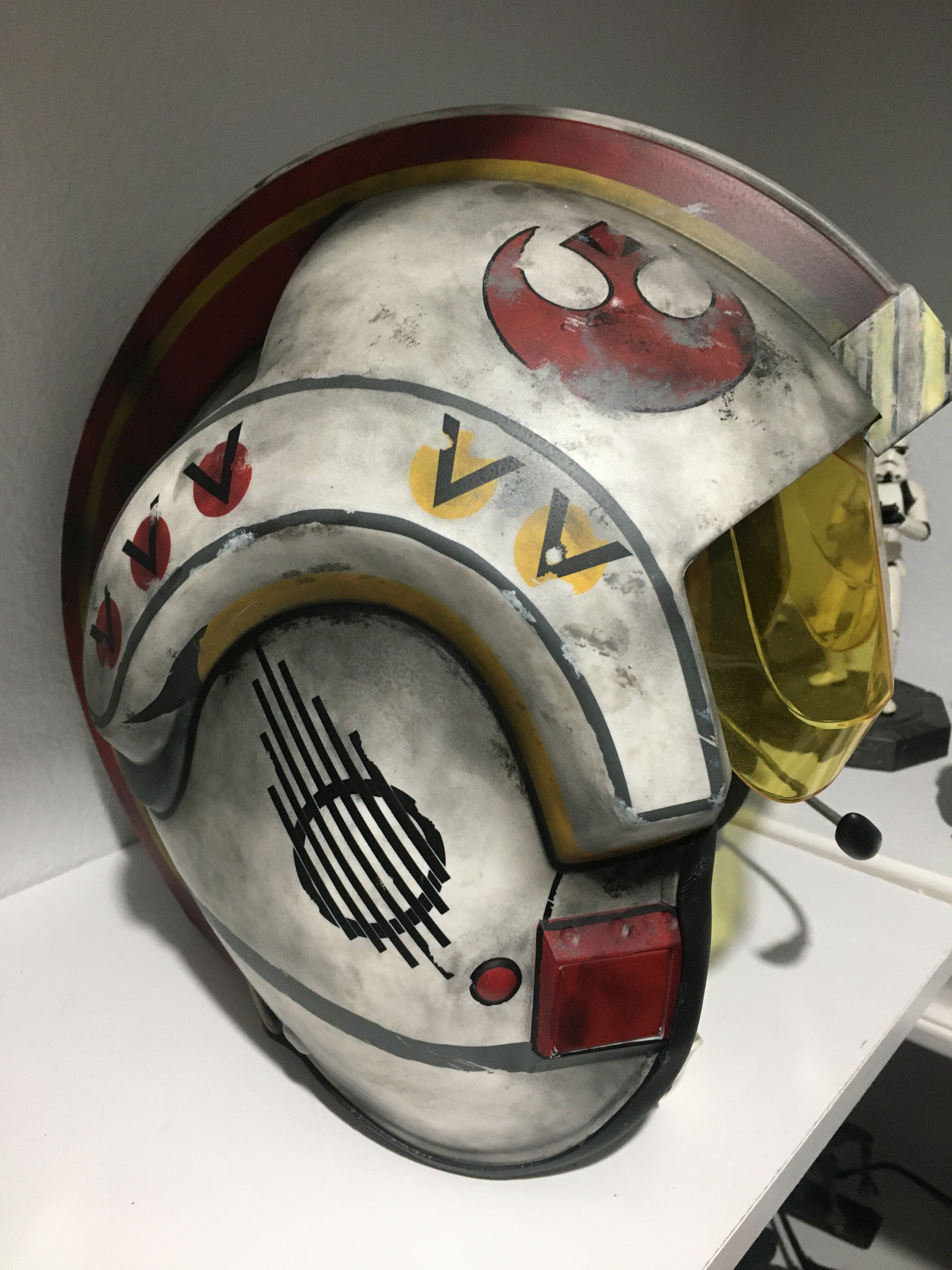 Are the helmets made of ABS, so they can be easily modded?

RPF PREMIUM MEMBER
Damnit... in europe we got no obvious source for the disney one. No Galaxys edge so far. Someone else here tried to check if his disneyland got one but that was a fail since they had a Out of stock just then.

Darth Lars said:
Are the helmets made of ABS, so they can be easily modded?
Click to expand...

I‘m not up on my plastic terminology to know if it is ABS or not but it’s an injected molded hard plastic similar to the Black Series.

masterX244 said:
Damnit... in europe we got no obvious source for the disney one. No Galaxys edge so far. Someone else here tried to check if his disneyland got one but that was a fail since they had a Out of stock just then.
Click to expand...

Are there plans to build Galaxy's Edge at Paris Disney?

PHArchivist said:
Are there plans to build Galaxy's Edge at Paris Disney?
Click to expand...

Yes, a scaled down version is planned.

Treadwell said:
Yes, a scaled down version is planned.
Click to expand...

That’s good to hear at least

Treadwell said:
2. The bump on the sides just behind the boxes: on an APH, these are attachment points for the oxygen mask. They are held on by a rivet, which is the bump behind it. Again, the bump is more subtle on the vacuformed props. The rivet is centered along the part on the APH. On both replica helmets, the bump is not centered, but are off-center in opposite directions. The bump is missing altogether on the wearer's left side of the Black Series.
Click to expand...

OMG that is accurate. The screenused helmets do not have the leftside bump! It's present on an APH so the rivet must have been removed and the hole filled on the source helmet (or an intermediate buck) that was vacuformed, for whatever reason.

here are some photos of the Disney Galaxys Edge or Batuu helmet.... clearly a cheaper version, and there are more than just cosmetic differences between BS and Disney.. the sounds are all different as well. Also the weathering metal "chips" on the Disney helmet are "reprinted" in small sections all over the helmet. Like a stamp that has been used over and over again. you can see it very well on the ridge. Ill edit this post so I can type a better response when I get to a keyboard.

I also have a Rogue One helmet that is pulled from the same moulds and assembled by the same maker as the movie helmets. I added my own paint scheme. I will post photos of that one, as well as the BS helmet I disassembled and repainted for my daughter. You can see all 3 together and see the differences.

here is post 2. these are closeups of the Hasbro Black Series Luke Skywalker helmet..
I posted on the differences in my Instagram account previously. you are welcome to check it out.
you can see the weathering is much more muted and softer than the Disney helmet.
if I were to guess, I would say the Disney helmet was the prototype for this one, or version 1, and the new run of BS helmets was a major upgrade to the Disney parks version which was not selling before v2 of the Black Series came out.
Also the sounds.. BS included Hoth in their more recent Luke helmet. you can switch to yavin or hoth and hear sounds from either, or you can leave the helmet button activated and just hear R2 sounds.
The visor in the BS helmet lights up with LEDs for "battle simulation". so there is a reason this visor doesn't raise.

heres the Disney Parks helmet on the left and the Hasbro Black Series on the right for compare. 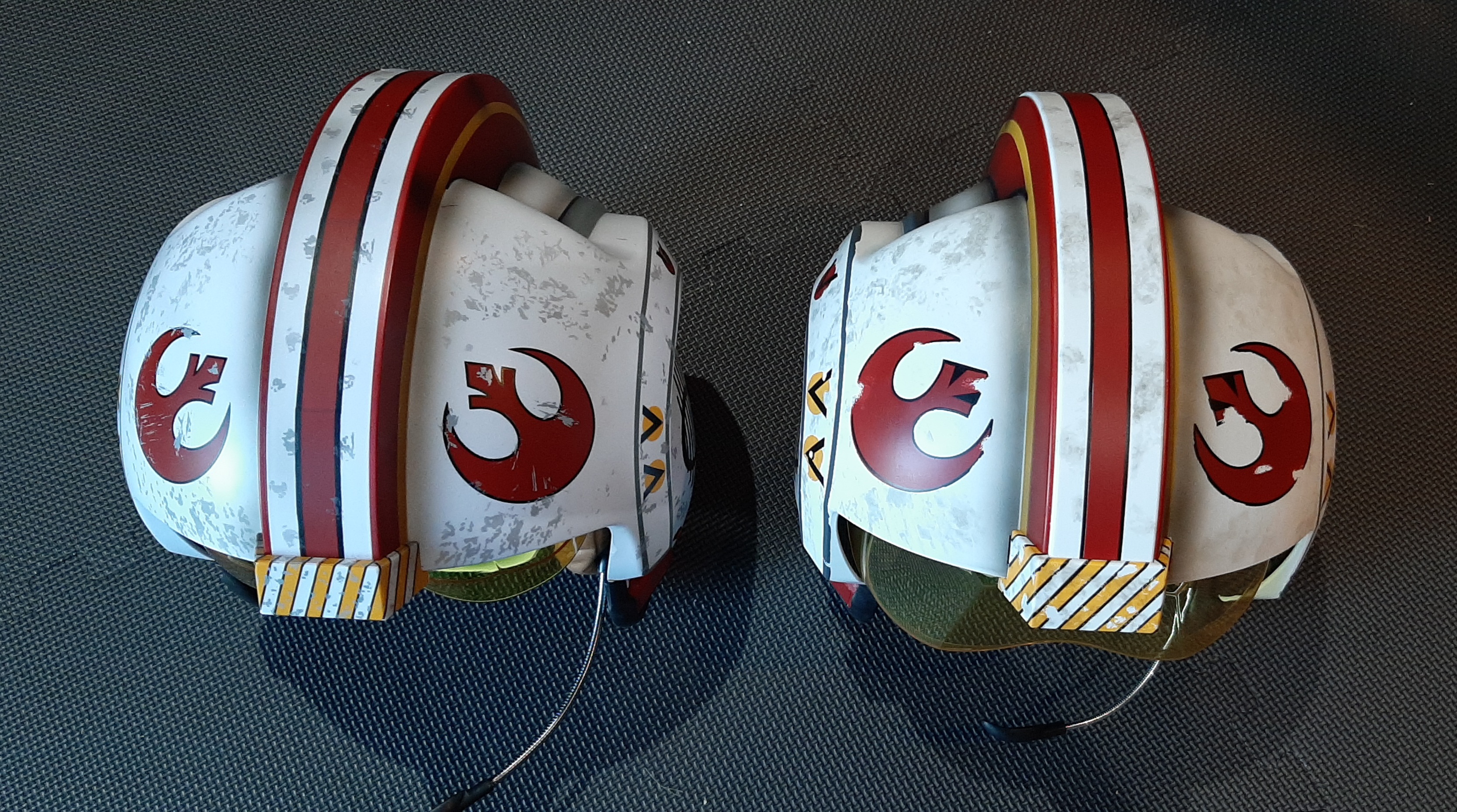 I did a disassemble and repaint of the Black Series Luke helmet and I'll show some photos here.
Any questions please ask. I'll do my best to explain how it works. you will have to forgive the mess this was. and I didn't take photos in the first part of disassembly of the interior of the shell and electronics. I'll be doing another repaint of another helmet here soon and will post a more detailed step by step.

My Roman's MK1 and Korbanth v2