My apologies in advance - I'm in the middle of about 6 things right now, so I don't know how often I will be able to get on here and make comments, but I will try my best.

First of all, I WAS a predator in P2 and I AM signing my own photos. They are usually sold through Alleydweller, who happens to be my girlfriend. She already runs an Ebay store, so she had time and said she would take care of it for me. As I get my own site together, maybe I'll transfer the sales over, but for now she is the authorized site/seller for my pics.

I was a young guy trying to make it as an actor in early 1990 and I knew a stunt man named Brian Simpson. Brian had worked on the first Predator (more stories from him later) and he and I were the same size. When Brian was called on to do a second unit stunt shot, they needed someone else to fill his suit for that end scene. See, whenever the Predator wasn't in a shot with a human, it could often be Brian because he didn't need to appear huge. It was Brian who was jumping tree top to tree top in the red effects suit in the first film, for example.

Anyway, Brian suggested me right away because I had make-up and creature suit experience. I got the call, and literally the following day was on set at Fox and up to my neck in a predator suit. It was awesome, a fan boy's dream, but man was it hot and after 12-plus hours, I couldn't wait to get that suit off. I still have the pay stub. More details to follow.

I met Stan Winston briefly, and he was nice, but he was busy and moved on. Kevin Peter Hall was a great guy. I hate to use the word sweet, but he really was. He was a joker, and always seemed like he was smiling. More on him later as well.

I DID NOT do the dance. I remember it, but I feel like the other predators were cast earlier and had already been on set once, and they had already worked the dance out. I just sat back and went, "Huh?"

I am 6' 1", and in the suit with the feet and helmet, was probably 6' 5". I was still the smallest predator there. I was also one of only two white guys, I think. It seemed like every other guy was African-American, and TALL. I felt like a runt Predator. Think Los Angeles Lakers meets Billy Crystal.

Earlier this year, a group called the Drunken Zombies saw me promoting my film at a show, Famous Monsters Con in Indianapolis, I believe, and suggested I should start selling my Predator 2 pics. It sounded like a great idea, so I got on it and by Fright Night in Louisville, we were doing it. I also met Jeff Wickedbeard at Famous Monsters, and he was key in letting me know about the Lair and all of the other P1 and P2 fans out there. I was also featured in Star Trek: The Next Generation, and I started selling those pics as well.

Now here I am, 20 years later, a struggling writer/director who is on the verge of releasing his first feature, a vampire film called Shadowland. I will check back in soon and tell some more tales. I'm good friends with Steve Wang, who was a make-up god on the first film, and he's got great stories. I can tell you some funny stuff about Jean Claude Van Damme, the original Predator. How insert scenes of the predator fixing his wounds were done thousands of miles away from the jungle, in the San Fernando Valley. Frogs in Arnold's suitcase.

By the way, I once actually tried to pitch a Predator sequel to Joel Silver. Joel shut me down in about 2 seconds and said, "I'm out of that now - these guys want to do Predator Vs. Aliens now, and I'm not involved in that." And there went my story. Maybe I'll put it on here for your reading pleasure...

Talk to you guys soon. Gene, your photo went into the mail today. Your helmets look good.

Thank you for stopping by, Wyatt. We really appreciate your input on actually being there! Welcome to The Hunter's Lair. Stop by any time !!!

Seriously... What a cool guy. Great read, you have excellent sentence structure.

Thanks for the pic I look forward to it.
Let us know when and where you will be appearing! We will come out and support the cause.

First creature boy, now this... It's getting better and better!

Welcome to the Lair mate, great stories love reading the behind the scenes stuff.

Do you have any examples of the signed photos you are selling for us to see and buy?

A Lost Hunter found at last Thanks for stopping by Wyatt, that was an excellent read and I look forward to hearing more stories. I hope the excellent work by the talent here on the lair makes you proud.

Welcome to the lair.
U

Many many many thanks for taking the time to pop into our little nuthouse. I think i speak for the majority here when i say , anything and everything you wish to tell about your experience working on P2, would be gratefully received.

As you now know, we ARE the number one source for Pred loonies

thanks again and i look forward to hearing more stories.

Wyatt, thank you for taking some time out to join our little predator nut house. It's an honour to have you here.
I look forward to reading your stories and adventures from Lost hunter to director and shall definitely check out your film when released.

Wow, this is amazing. First of all, Thank you so very much for stopping by, as the others have already expressed, we’re honored to have you and look forward to all the insight and experiences you’ll hopefully be sharing here with us…I have soo many questions I’d love to ask you but I’ll save that for later! Well, hope to see you around soon.
~Estelle

OMG, this is awesome! Many thanks for sharing this info with us and taking the time to do so! The lost hunters are one if my favourite aspects of predator! Mainly because they all look cool and I think it's the mysteries that surround them due to the lack of material we have on them! Hopefully your info will shed some light! Man this is awesome!

I got to meet Wyatt at the Fright Night film fest in Louisville, KY. He is a very cool guy. Took the time to talk and answer my questions. I didn't know he was going to be there. My youngest daughter was with me and said "hey dad!, look at this Predator pic". It was one of the 8 x 10 pics Wyatt had of him in the suit. So I had to have it! 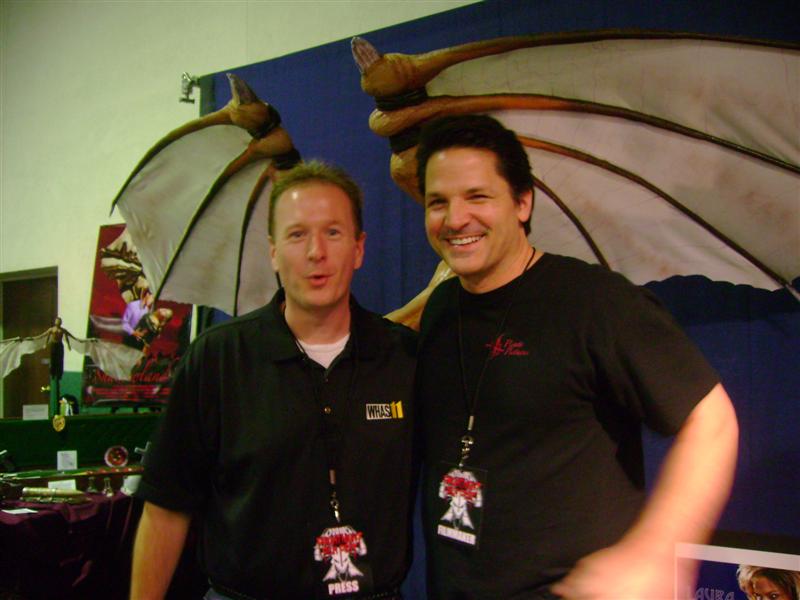 Man Can this month get any better?...this is truly mind blowning

Thank you for joining the board wyatt...it's truly an honor to have you here...

You are a legend in predator history....even though your screen time was short as you can see you left quite an impact with us. mostly gene...

if it wasn't for the lost hunters i would have never thought it possible to create the forum i knew when i saw you all for the first time, i thought they come in all shapes and sizes ..and there you have it the "birth of the lair"

I soo look forward to hearing set stories and other experiences you had ...enjoy your stay and welcome home.

what can I say that hasn't been said already
Great to have you here Wyatt!
hope to read some of your sotires form the set specially the practical jokes played on each others and I would looove to read your take on a pred sequel.

Welcome. Glad to have you as part of our community, and thanks for taking the time to come and post. Can't wait to read more.

Ditto to all that has been said

Here is a shameless plug for Wyatt Weed.

Here is a link to his Ebay Store.
Ebay Store: Wyatt Weed

And here are the pictures up for auction. WAY COOL! 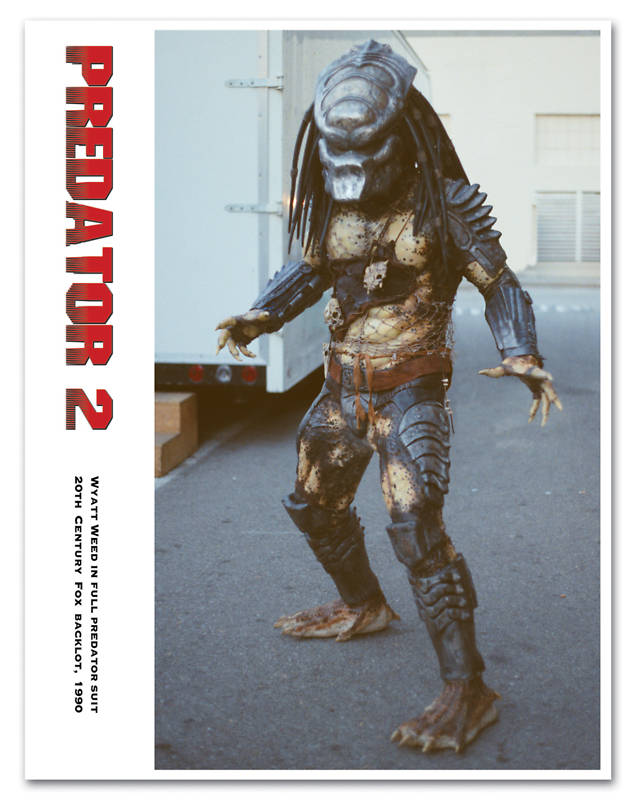 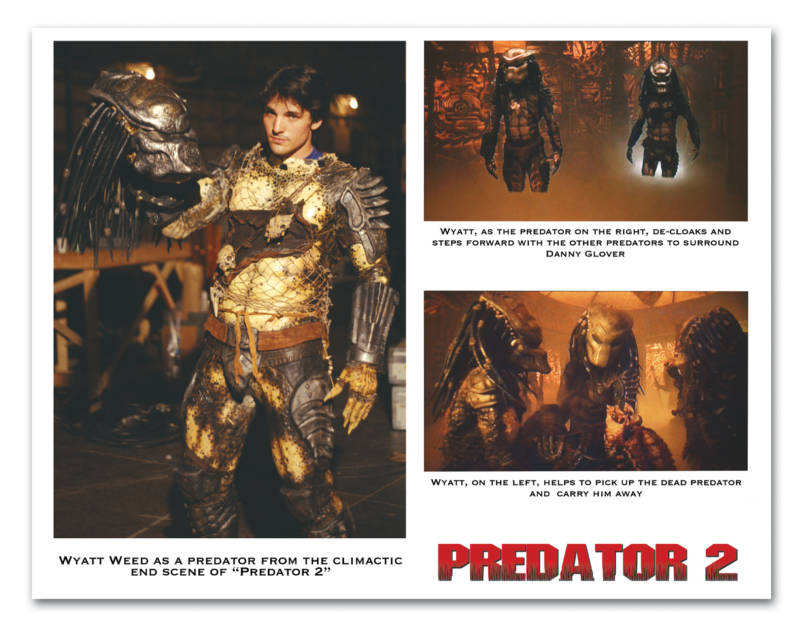 A Lost Hunter no more! He has found his Pred home and his fellow hunters again! Its an honor to have you here Wyatt. Thank you for taking the time out to join and post. I think its safe to say that we all look forward to every entry you make. Thanks again and welcome to The Lair.

It's so great to have you here Wyatt, welcome to the Lair. Can't wait to read some more of your stories.

OMG thank you so much for sharing with us and we are looking forward to hearing more from you about the experiences you had. Thank you!!!!