Having a blast so far! So much to do and see!
I will post pictures once I get back home, but here is my full Female Predator Suit!

Like I said on facecrack your suit looks awesome. Glad you're having a great time. Can't wait to see more pics etc.

Looking good!
I was planning to go but sidetracked.
We'll have too see if there are any in MN to attend...

Snake14 said:
Looking good!
I was planning to go but sidetracked.
We'll have too see if there are any in MN to attend...
Click to expand...

I'm from Minnesota too! I might go to the Fall Con in MN, come join me!

My son and daughter in law live in Delano-- They are wanting to get into some of the sculpting and such. He did pretty good for his first time with some clay I got him. Maybe you should connect!-- Let me know and ill exchange the info-- what is your FB page? PM me

eaglewood said:
My son and daughter in law live in Delano-- They are wanting to get into some of the sculpting and such. He did pretty good for his first time with some clay I got him. Maybe you should connect!-- Let me know and ill exchange the info-- what is your FB page? PM me
Click to expand...

Hope to see more of your pics from the weekend.
We will have to connect.
It'd be great to have a few people that share my obsession nearby!

it was Awesome to meet you! I was the Batman on Friday. Wish I would have gotten pics of you on my camera. There was a lot of love for Preds this year, I believe I spotted at least 4, and a bug!

Some of us Michiganders came over for Wizard on Saturday, as we normally do. Hyper brought his Pred suit with him (I did not) and we met Qcvader who is another 501st Star Wars costumer who also brought along his Pred with him. I brought my Stormtrooper that I wore in the morning, and my screen used D'Haran Dragon Corps soldier in the afternoon since 3 of the cast members of Legend of the Seeker were at the con and we wanted a pic. LOL

Anyway, towards the end of the day I was walking back to the front and a few aisle over, saw Hyper and Qcvader standing near one of the booths with their Pred heads and hands off. So, I walk their direction and as I get over there, Hyper says "do you know who this is?"...and I look and it's our own Honorary Member Wyatt Weed, aka BOAR !!!! So, besides however long that those two guys were talking to him, I stayed probably a full half hour talking to him, myself. He gave us autographed BOAR pics and was a really cool guy in real life. He was there promoting his new films he produces and such, but his producer lady who was with him gave me her contact info for some possible upcoming things that the Lair members could do. I'll find out what's up and let everyone know.

He said he needs to come back and say hi, as it's been a long time since he's been on here. He told us a few more stories about working on the set, about how Steve Wang said he sculpted the stunt P2 bodies for the original stunt guy Brian who also worked as a stunt guy in the first movie. Also about what he told us on here before, how he was the shortest Lost Hunter and he's 6'1" barefoot. He said him and one other guy were the only white dudes, and all those other tall black guys....many basketball player types and he thinks many of them were KPH's friends, that's how they got involved in the movie. He said the director had to train them how to act like monsters cause when they all suited up in their Preds, for movement....they were all "Jive-walking"...and the director in his British accent had to tell them to stop "Jive-walking".....and that they couldn't really do "monster movements" cause they had no previous movie type training with it. Where as Wyatt said he tried to do more of the monster type moves like KPH moved....well, as much as is possible in the short time we see the Lost Hunters. He told us how the spaceship set was fiberglass walls all backlit from the outside behind the panels, and that made it like being in an oven.....and then in a Pred suit.....

Just a great guy, and I WILL try and contact the lady and see what and where he may end up at some cons in the future and see if any local Lair members around wherever that might be would like to just come hang around his booth to draw people over to see his new projects. Essentially using the old popular franchise he happened to be involved with to boost his current things by drawing traffic in. Sounds like something we could do. Just suit up and hang out around his booth instead of random other spots inside a convention.

Just a down to earth, genuinely nice guy. Really glad by pure chance us three got to meet him. 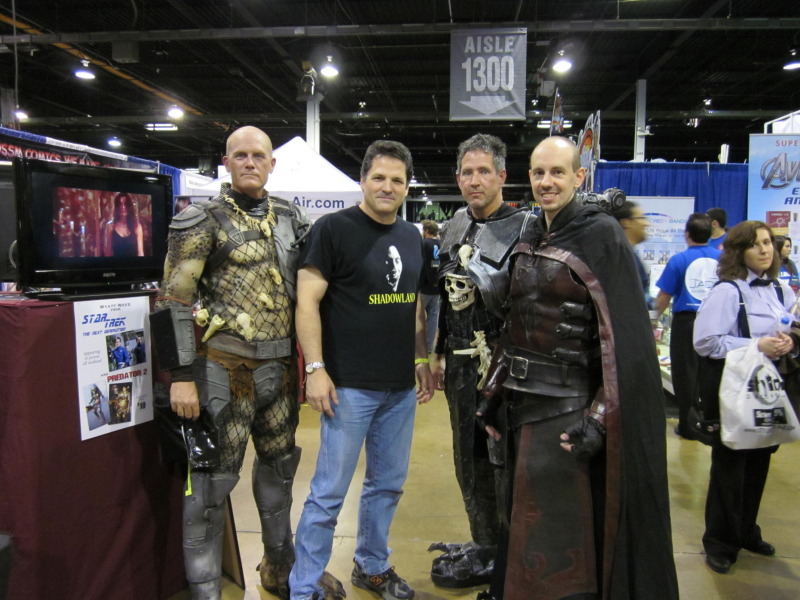 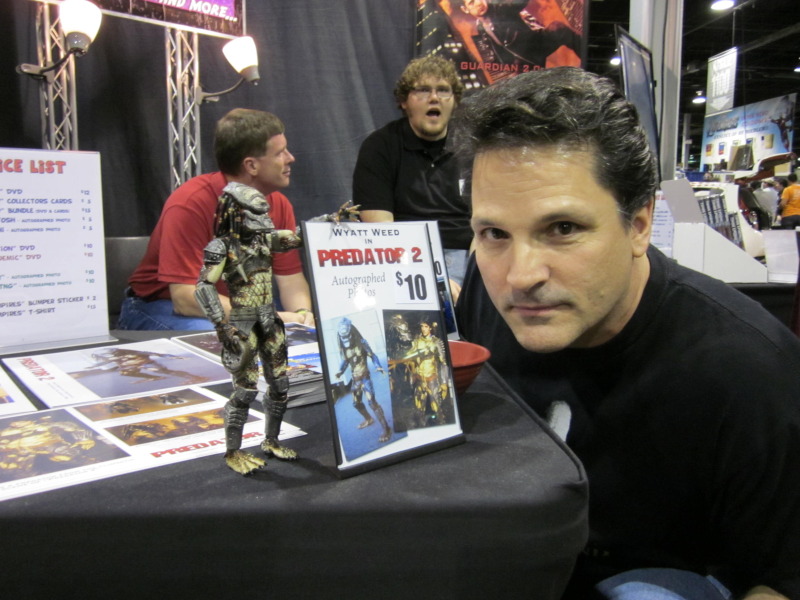 I think that he bought his very own figure to have it holding his autograph sign that is really cool.

Yeah, he said he thought it was funny/cool that there WAS a figure of him. He said someone told him about it and he had to get one. LOL

Awesome pics and GREAT info! Hearing about the movie this long afterwards still blows my mind.

Sorry Andy I didn't tell you,
we didn't just randomly go over to Wyatts table.
Earlier we were taking photos with people in the center by the main doors to the con and Wyatt and his PR person chased us down to get pics with us. He even brought his 8x10 photo of himself in his Boar to hold standing between us.

He invited us to stop by his booth to talk after we were done. While we talked he autographed some personal photos for as well as just talking shop.
Just after that is when Mr Fett showed up thinking we just happened to be there. Lol

It was great to meet him as well as chat about what we do.

Hope to see him in the future again

daywalker said:
it was Awesome to meet you! I was the Batman on Friday. Wish I would have gotten pics of you on my camera. There was a lot of love for Preds this year, I believe I spotted at least 4, and a bug!
Click to expand...

My bf got us in a few shots, I'm getting them now

That's really cool guys!
I saw his booth but never really got a chance to stop by.
I didn't stay in my suit too long, I should have.
I have Chronic Vertigo so there's only so much time that I can be walking around, I should have worn my mask while in my wheelchair at least!

I had a blast though, this was the first official Cosplay I have ever done and I really enjoyed myself.
I will do more in the future!

Getting screen grabs from the fottage my bf took

@Fett: Wyatt, is a awesome guy. That's great you had the chance to meet him on person. It would be great if he'd pop in and give us a visit here on the Lair. I usually get updates from Gayle, on what's going on with Wyatt and his film progects, now he's one to have on board for the Lair, pred fanfilm project.
~Estelle

That pic with bats is awesome! I love the mask!

Some Highlights From Chicago Wizard World 2013