Thanks to ONEEYE (Richard) for giving me a Bio that he got from Bathunter years ago. Kudos to you Richard! 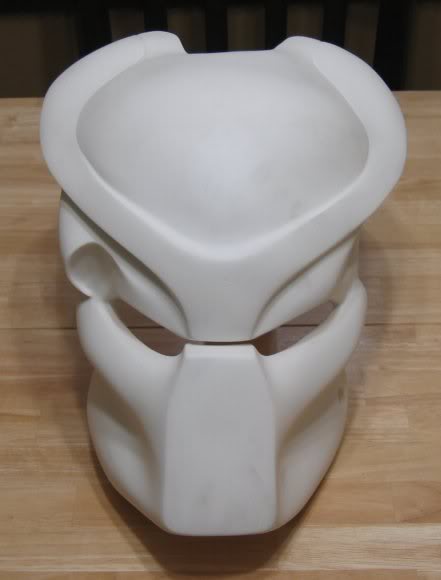 It was called a Porsche due to its sharp defined lines - as opposed to the rounded curves traditionally seen on a P1. Ironically, the Porsche was the very first Bio I ever purchased from Predfann waaaaay back in the day. I got rid of it years ago, so its very cool to see one again since I don't think they are made anymore. 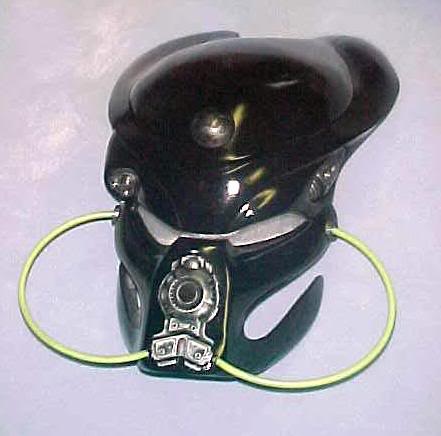 When I got the Bio from Richard last week, the jawline was noticeably warped and the plastic added on bits were very fragile: 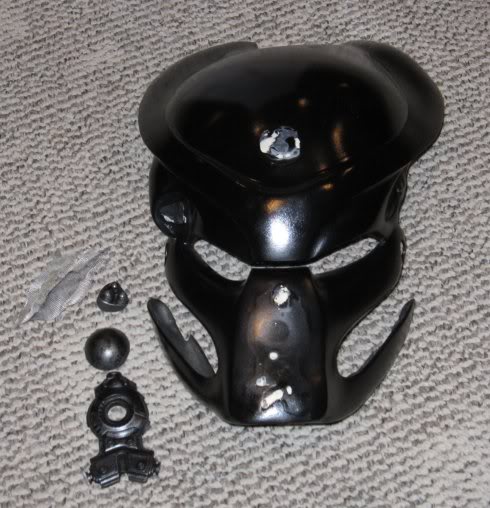 The original plan was just to replace the LED's, but I had to fix the jawline too. I knew this would be a daunting task, so I asked Richard if I could attempt to restore this Bio even if it meant changing the look that Bathunter gave it. He said go for it.

Then I got thinking that I could redesign the Porsche to be a hybrid between a rounded P1 and the defined Porsche. I drew red lines along where I wanted to make adjustments:

My first task was to fill the cheeks in and give the jawline support again. I got creative and took some plastic cutting board and cut it to fill in all the holes in the Bio: 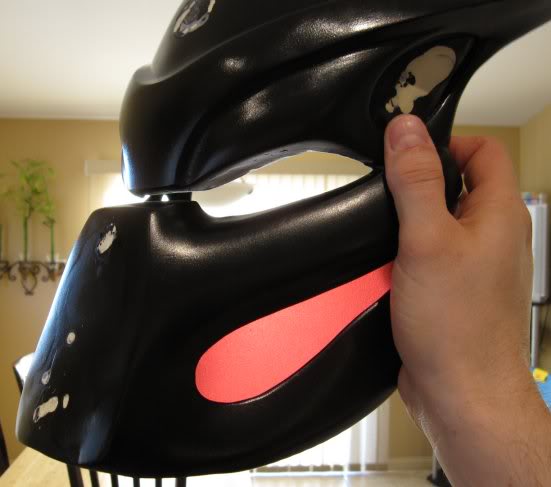 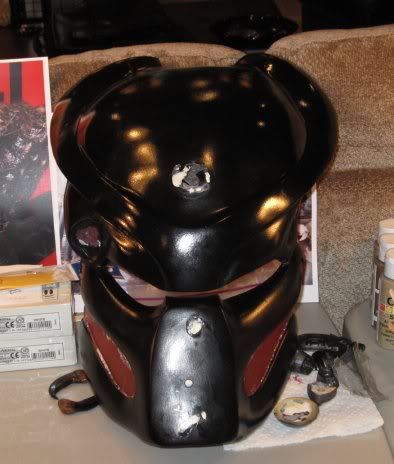 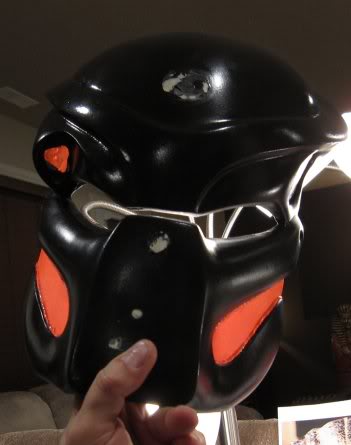 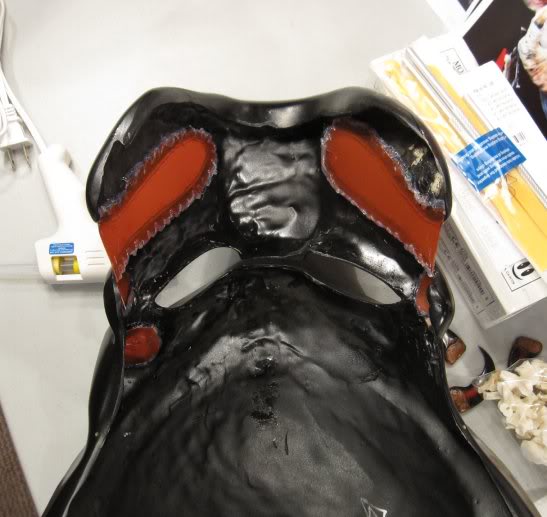 Then I used bondo to fill over the plastic in order to make them rounded again: 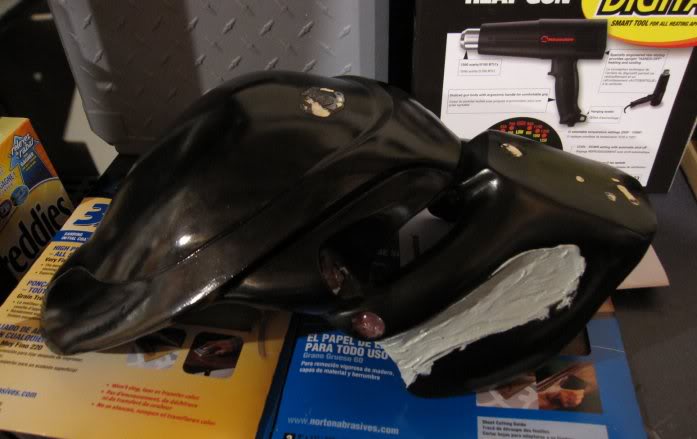 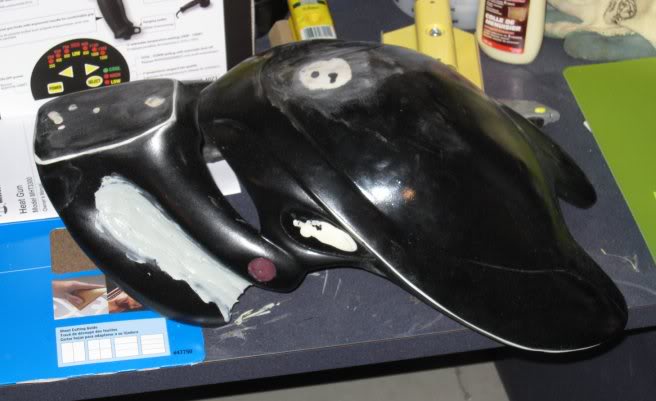 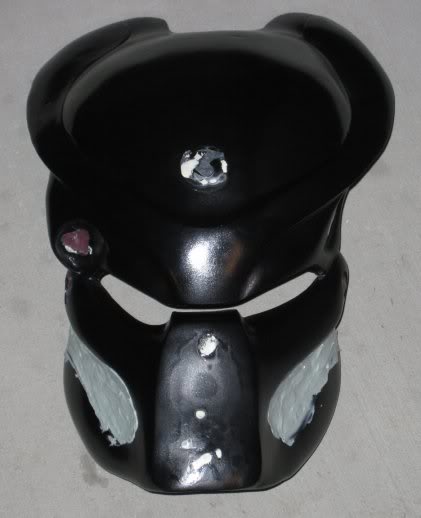 Then I started sanding down the sharp edges on the mouth: 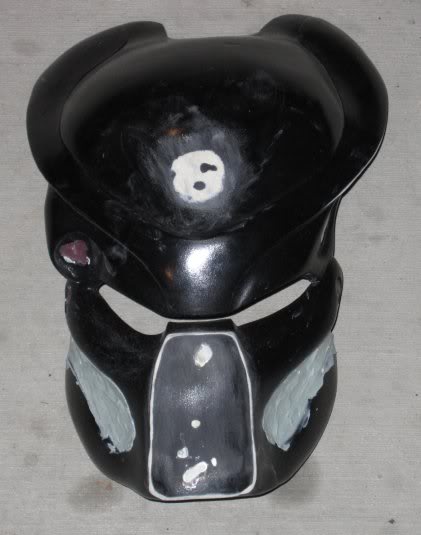 Then I stopped and had to go watch LOST lol! Gonna keep updating this as I work on it...

pretty interesting work. cool to see how this progesses.

Worked on it for an hour and a half today. 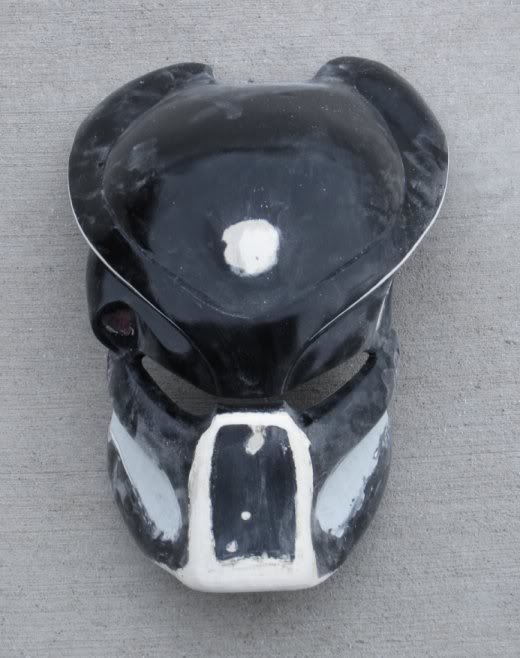 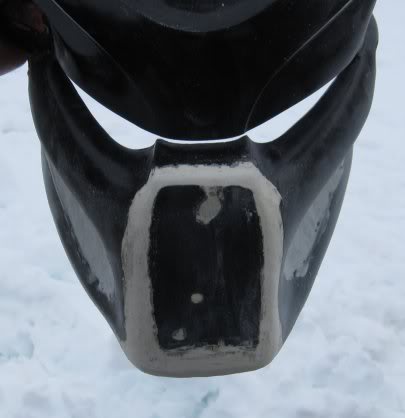 Rounded the chin and mouth area some more: 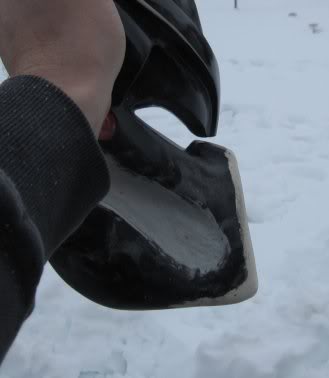 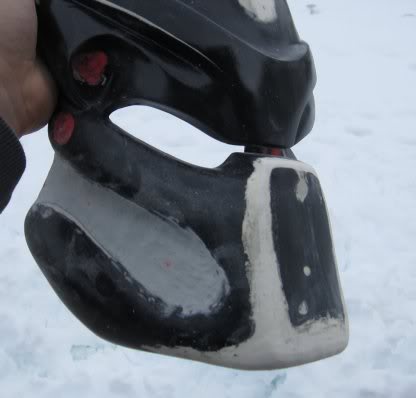 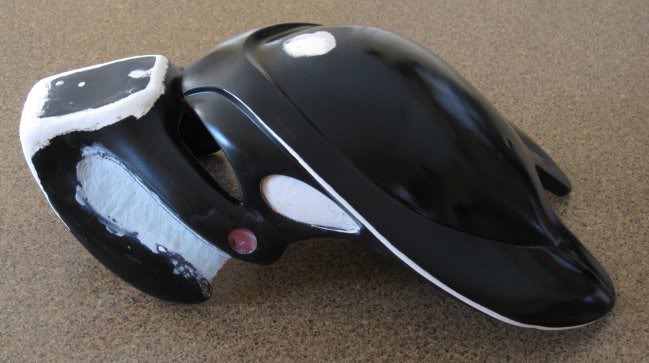 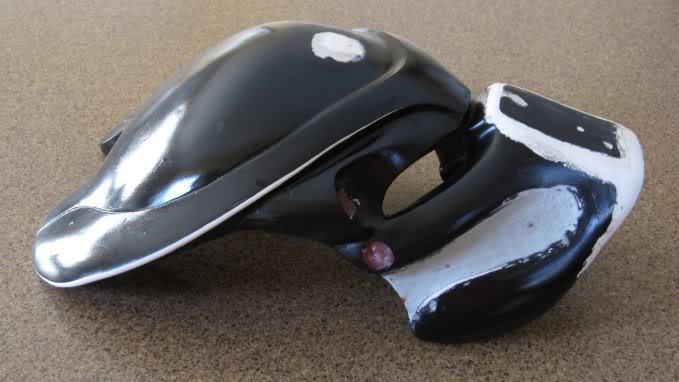 The only critique I have Jason is that the bottom jaw line on the left side seems to stick out further then the right. Other than that it looks great so far, and I can't wait to see more of it.

Ya I know, I just ran out of juice on my Dremel. More to come!

Thanks Casey! I looked for fiberglass, but had to use bondo instead. It works, so I just have to sand it down...

I really have an appreciation for you, Daman, Paul and everyone else who sculpts Bios. I figured I'd see how far I could get just using a Dremel first. I can see how symmetry drives you crazy! And smoothing the surface...well, thats a bitch too lol!

yeah mate, the best skill you will ever learn when it comes to this craft/art, is patience.

It's coming out great Jason.
How did you go about fixing the wonky eye? that was the main reason for me not to get another porsche but I have ben itching to ge tanother one and was contemplating the fix. I'm currently going to work on my wolf morgan bio to fix the same problem and see if I can fix the warp.
You my friend are full of surprises..
keep the pics coming

It was easy - just a steady hand and my Dremel. I went slow and eyed them both up to make sure they were the same.

Is there any updates on this Jason?

No no yet sorry. Too darn busy, but hopefully soon!

Lots of detail sanding and precision trimming. Cheers to ya.

I've filled a bit more, but nothing picture worthy. Sanding takes time and patience. I have little time and lots of patience lol!

This is the guideline I've been using for stuff that needs to be worked on: 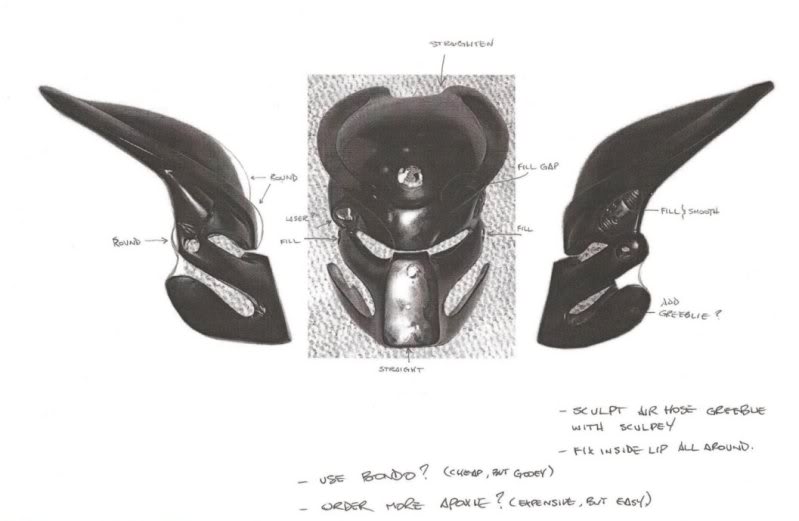 And this is what it should look like when its done:

You are very welcome!

Somehow, I missed this thread. Now I've bookmarked it and am rabidly keeping up to date with you progress.
Wow, fantastic work!

I'm taking a break from this, painting heads and making LED's. I have too much on my plate and ironically I only have to draw at work when its dead.

As soon as I start working on this again, I'll make sure to post updates.

I kicked myself in the ass and started on this again tonight. Its going to look more and more like a mess before it starts to look half decent. Right now I'm at the turd stage lol!

I slapped on some more filler and filled some of the small dents and nicks: 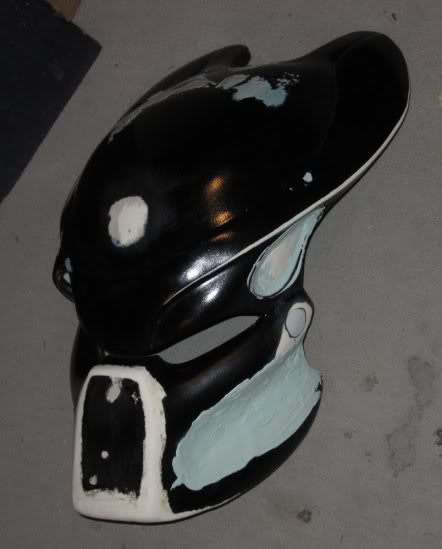 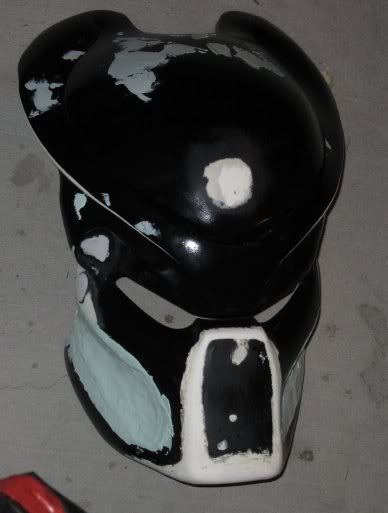 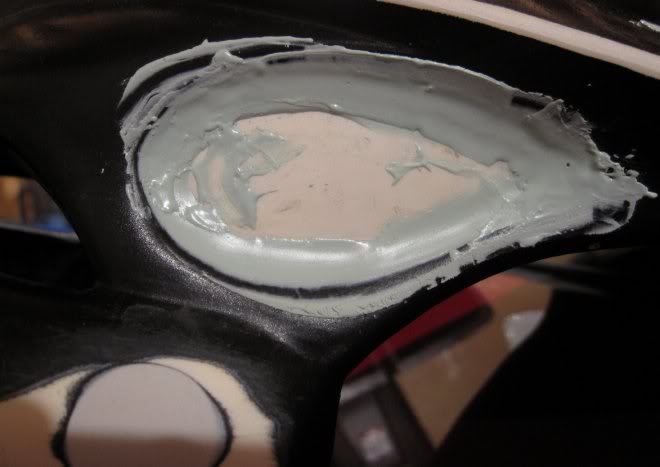 The part where the hoses go had some very sharp edges and I wanted to make them curved to the point where its just an indentation and not so defined. 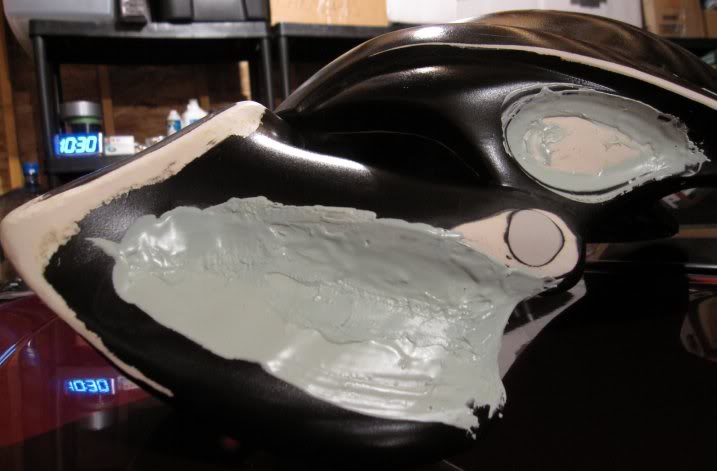 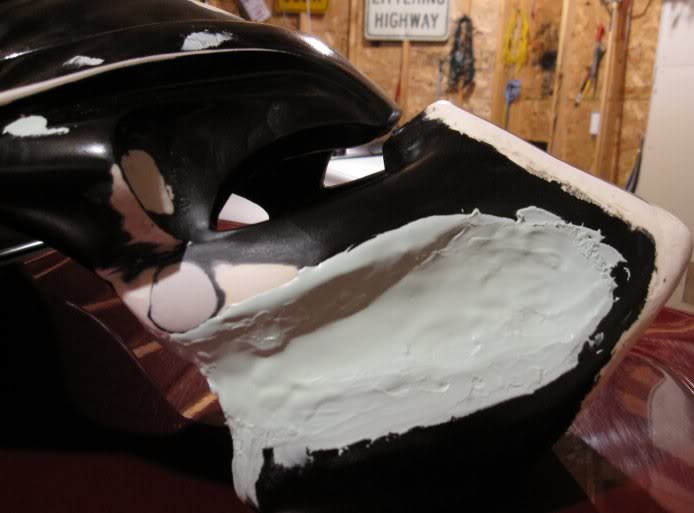 Filling the indentation in the lower jawline: 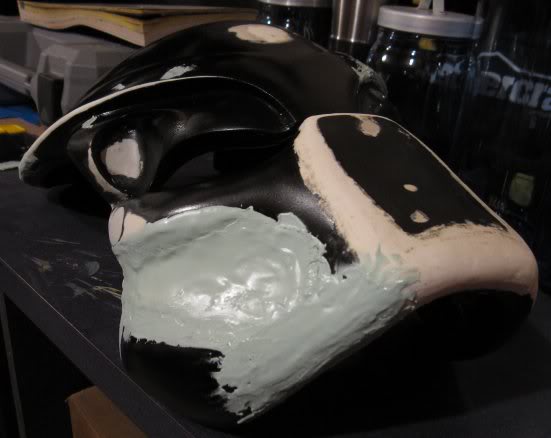 Removing the dent above the left eye: 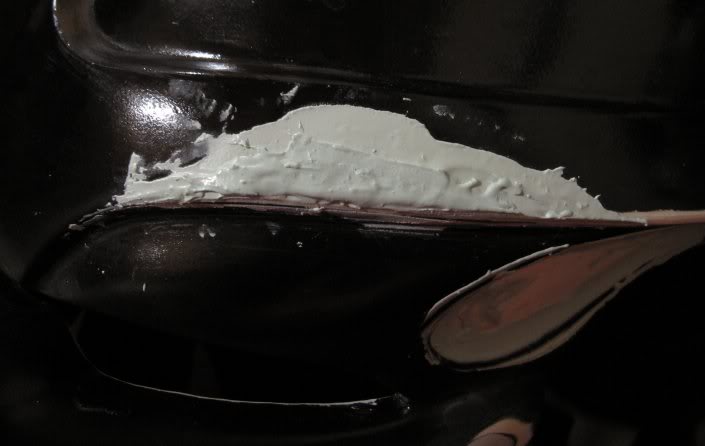 Filling the dent in the side: 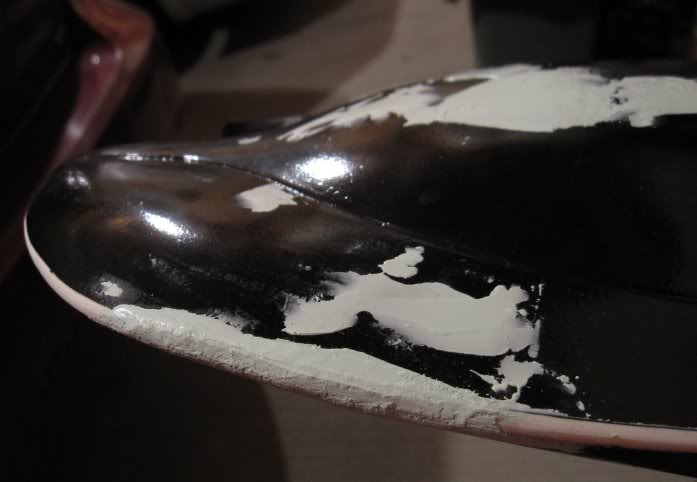 I was considering taking macro pics of all the flaws, but I only thought of the idea when I was half way done filling, so you're just going to have to take my word that this Bio has imperfections a-plenty! I'm a perfectionist, so this is going to take time to get right.

I am looking forward to sanding it down and seeing it take shape again.