WIP - Eldrad from Doctor Who

After doing some challenging but all soft-fabric costumes, I'm getting back into something a little more multimedia for my current costume project. Ever since I first saw the costume for Eldrad from the classic Who serial "The Hand of Fear" as a teenager, I've been in love with it. I've been toying with the idea off-and-on for years, but I've finally solidified my approach and am getting cracking on it!

For those who don't know the costume, it's basically a walking glitterbomb: 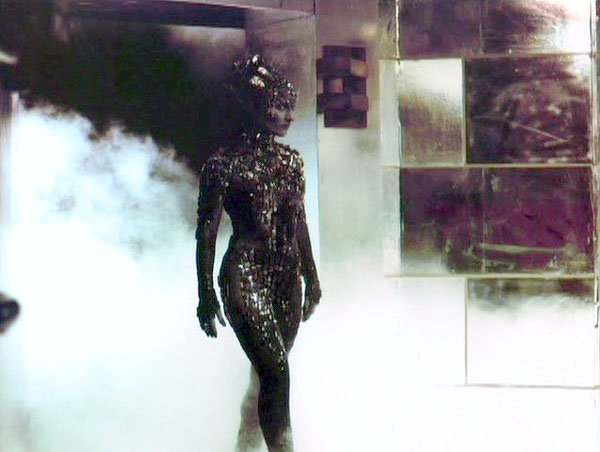 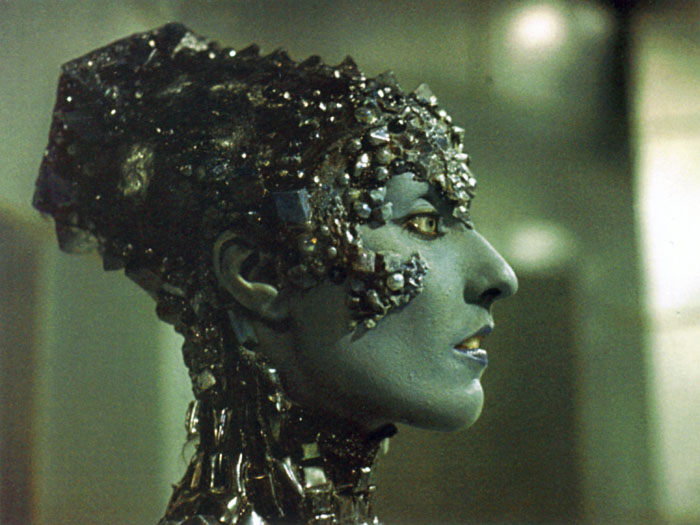 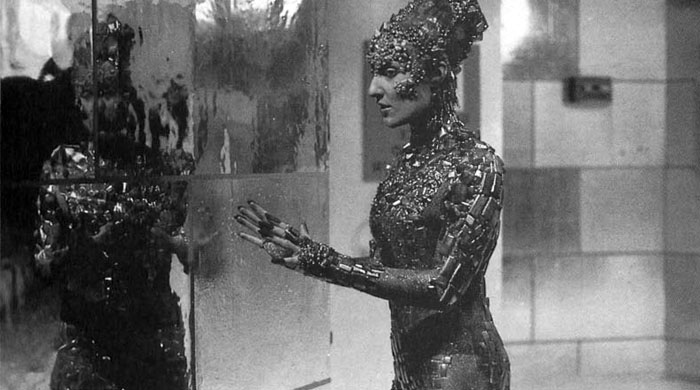 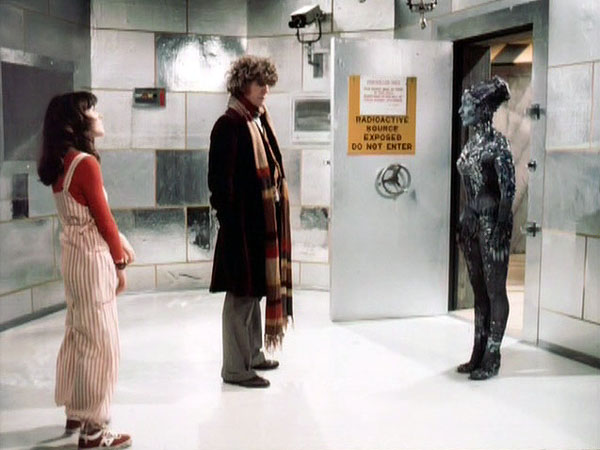 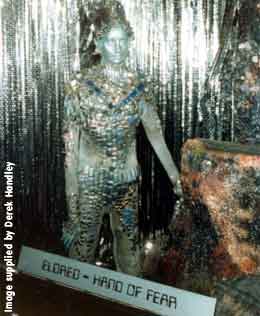 SO SPARKLY. I've heard that the actual costume used vac-formed crystals, and that the actress had to be sewn into it!

My first major decision was what fabric to use for the base suit. The references I have are fairly awful, but to my eye it looks like the original suit is a very vintage sparkle-knit - the very textural sort that is almost tinsel-y in texture. Sacrilegiously, while that works fine on low-res TV, I decided I wanted something that in-person would visually blend more smoothly with the crystals. I ended up deciding on a snakeskin-textured lycra. 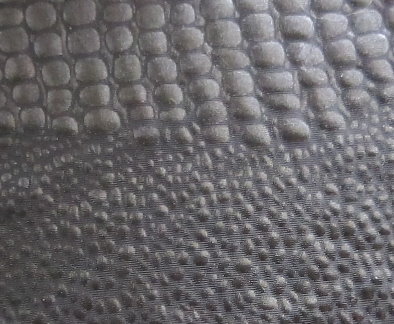 I'm using black as my base-color, but when over-painted with silver spray, I'm quite pleased with the effect it gives. I did a quick test with some leftover paint I had on hand. 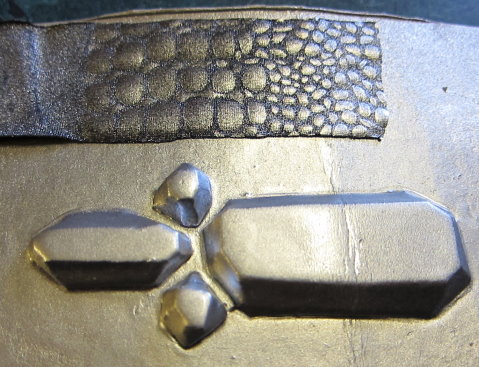 I also did a quick test of the foam technique I'm going to use for the crystals. Basically, it's the standard PVA technique, but since this will need to be flexible and washable, I've substituted Mod Podge Fabric for the PVA. I had to bend the foam completely double to get the crease you see there, so I think it will be sufficiently flexible.

Funnily enough, I had a hard time tracking down black snakeskin lycra, and the only way I was able to find it finally was in the form of pre-made zentai suits on eBay. Works for me! I was able to purchase an additional yard of the same fabric from the seller, which gives me enough for boot covers, etc.

I've had to do a great deal of modification to the original suit: fitting the torso, realigning the hands, adding shoe covers. Also, since I know a fair bit of the stretch will be lost once the crystals are glued in place, I've had to add five extra zippers at wrist, ankle, and waist to ensure proper fit. The shoes I'm using are proportionately a little short in the heel, but since I'm not sure if I'll be able to sit in the final costume, I was definitely sacrificing accuracy for comfort in this case. 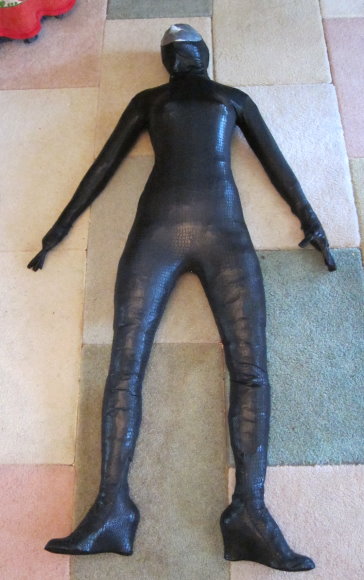 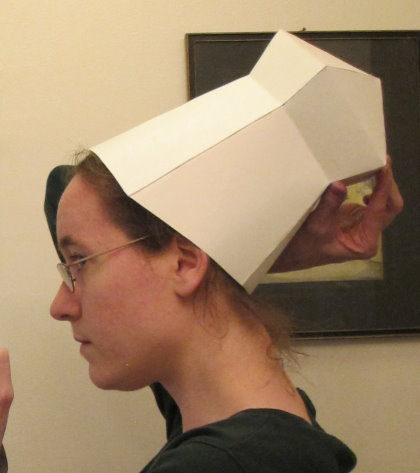 Not quite perfect, but with a few tweaks to the angle and fit I think I can work with it. 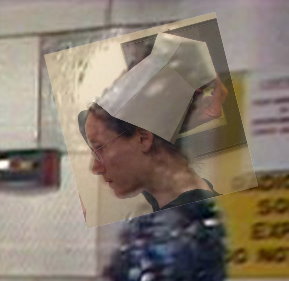 And that's where I am right now!

Finally have some progress to show - not because i haven't been steadily making progress all along, but because I haven't really had anything to show for it up til now except a house covered in scraps of fun foam. I've spent the past few weeks slowly going mad while cutting out hundreds of individual fun foam crystals. 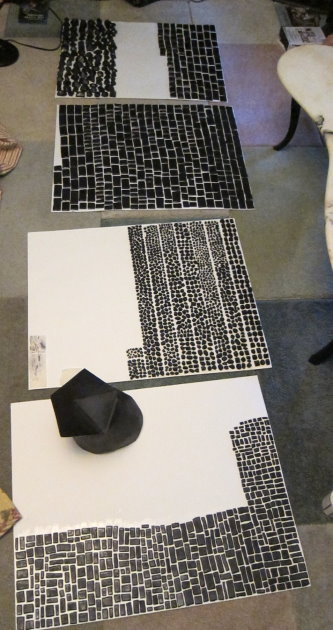 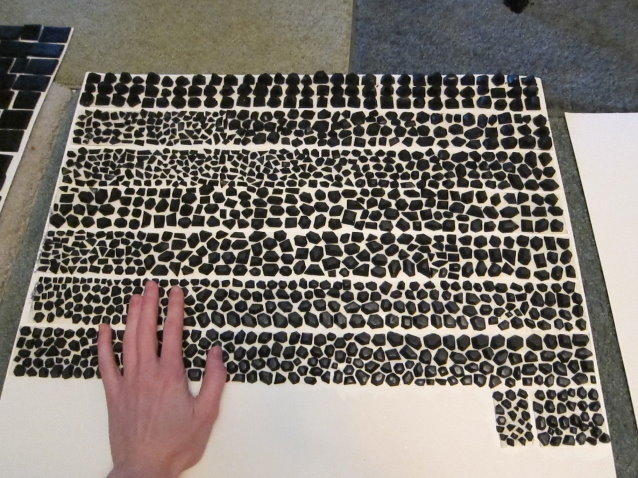 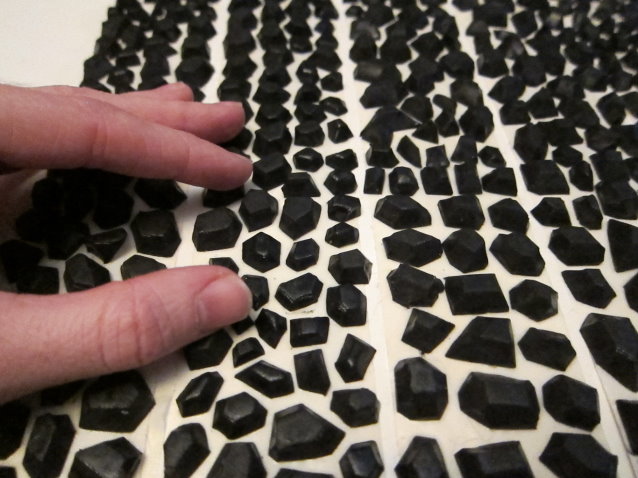 Now it's time for multiple coats of Mod Podge Fabric. Then paint!

This looks really good so far. I always really enjoyed The Hand of Fear, so it's good that Eldrad is getting some love.
Enjoy attaching each of those crystals to the suit...the thought of it brings back terrible memories of me having to attach scales one by one to my Aquaman costume. With plenty of Doctor Who to watch and a little alcohol within arm's reach, you should get through it relatively stress-free.
Looking forward to more updates!
D

RPF PREMIUM MEMBER
Yay! A new Penwiper build!
Love the project! Can't wait to see what you do with it.

I'm watching all of classic Who (though I'm jumping around a lot) and I haven't made it to this episode yet. However I will say from these screencaps, it stands out as a great looking costume and your progress so far is incredible. So many crystals...

Thank you, all! The original really is a nifty costume, isn't it? Here's hoping mine somewhat lives up to it. Right now, I've hit the stage I hit with all my costumes where I hate everything about it and think it's awful... but based on past experience, within a few days I'll be super-excited and loving it. I hope!

Major discovery of this weekend: if you put on a snakeskin bodysuit and have your sister spray-paint you, when you pull it off, you're a lovely dapple-grey all over. 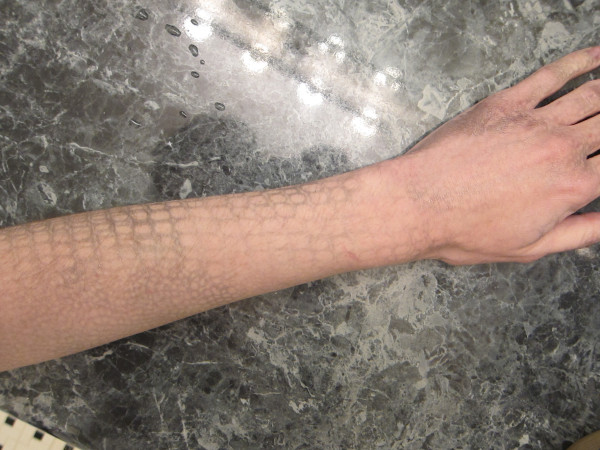 You are amazing. What a challenge to tackle and like always you are a superstar at jumping in fearlessly with creative genius! The progress so far is very, very promising and your patience to cut out all those crystals is staggering! haha!!

omgsqueesqueesquee! I just saw this episode at about the same time you originally posted (but I didn't see it until now) and have been wanting to make the costume myself My first thought was the art department raided the nearest mosaic tile place...

Awesome work and most excellent idea for the material substitutions

Well, this one can be moved into the "finished" category, pretty much - I don't really have any more construction photos to show, since I hit the last-minute-deadline wall (and in fact was aging and rub'n'buffing it in the hotel bathroom the day before I wore it!) but the remaining process was pretty much a matter of sealing and painting the crystals and glueing them all over the suit.

Of course, I'm not totally happy with it (when is one ever?). It turned out that I could really have used more crystals than I had, so I definitely need to make another batch and add some more before I take this costume out again. I also want to work on getting a higher gloss on the crystals, fine-tune the color and aging some, work on getting the crystal layout a little more randomized, find some way to hide my eyebrows, etc. But at least it was wearable, and I really enjoyed wearing it.

Oh, and thank goodness for friends who will respond to panicked tweets like these! "Can anyone come to room 123 and zip Eldrad up?" More than any other costume I have, this one is impossible to get into solo! 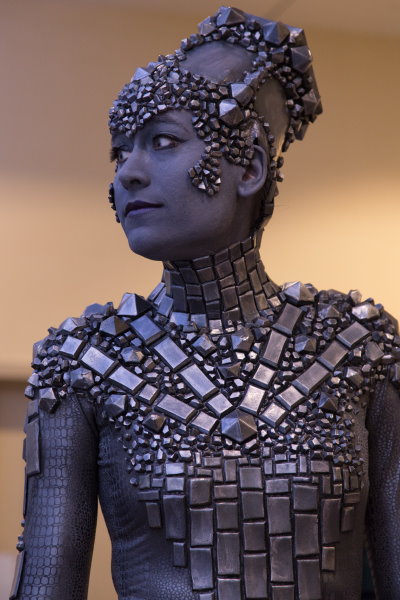 Photo by Ionus Photography
The face makeup is Kryolan Aquacolor. This was my first experience with that kind of makeup, and I have no idea how you guys who do full-body makeup ever manage! The "prosthetic" crystal areas on my face are part of the "hat" - just more of the fabric from the bodysuit, covered in crystals, and held down with wig tape. 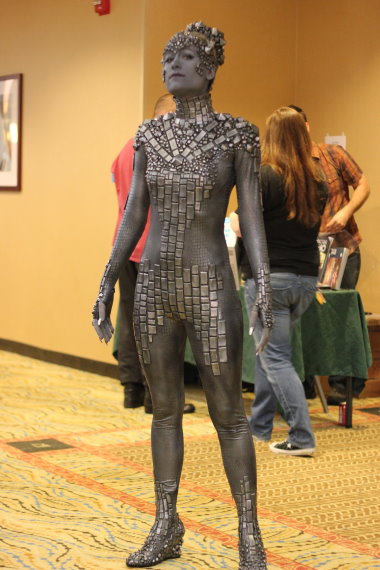 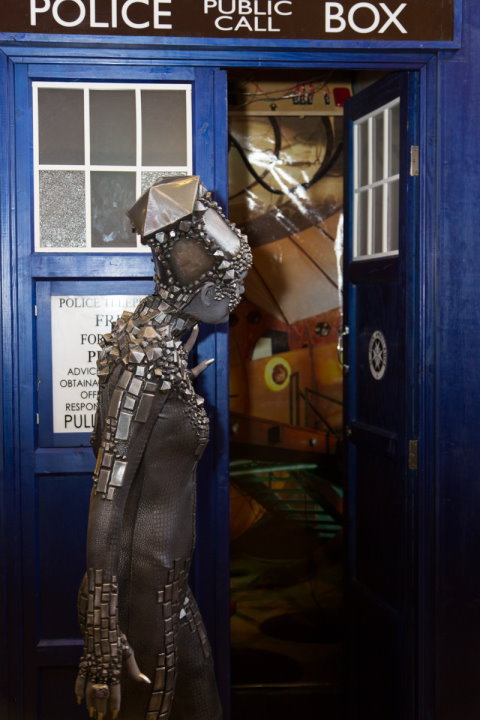 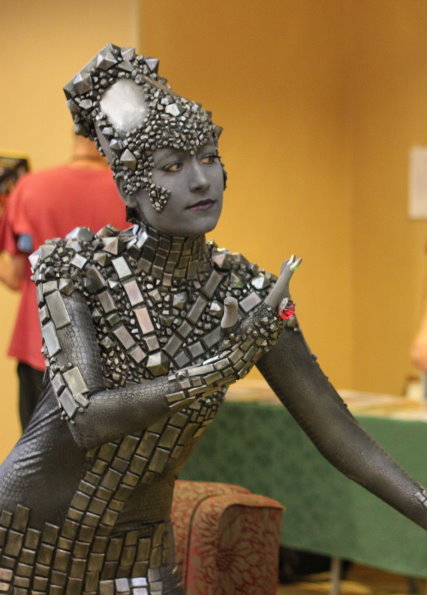 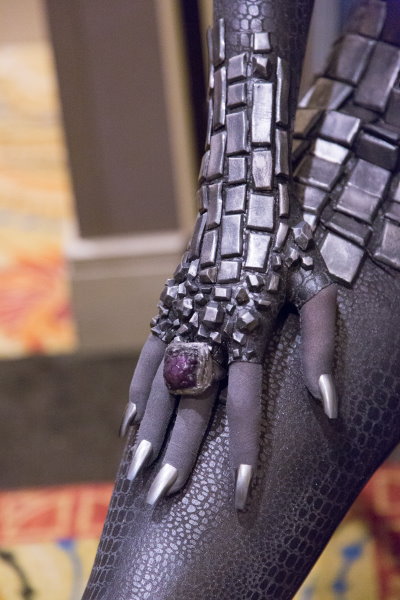 Photo by Ionus Photography
I used the same gloves-made-from-tights technique that i had previously used on my weeping angel. The ring was rather disgracefully bodged together in the hotel room out of a squidgy light-up ring, hot glue, and fabric paint! 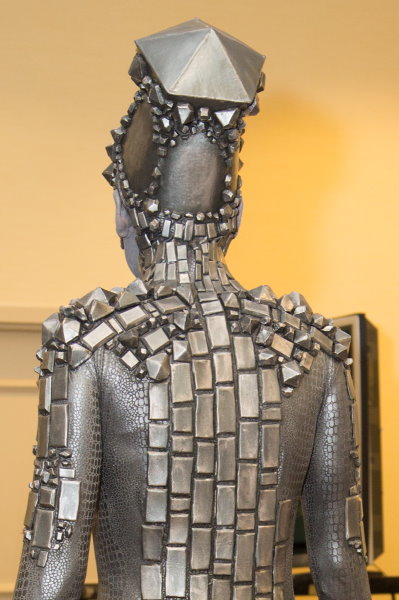 Photo by Ionus Photography
There was a big ugly back zipper on the suit, which fortunately I was able to hide completely with a strip of crystals that gets held on with double-sided tape. 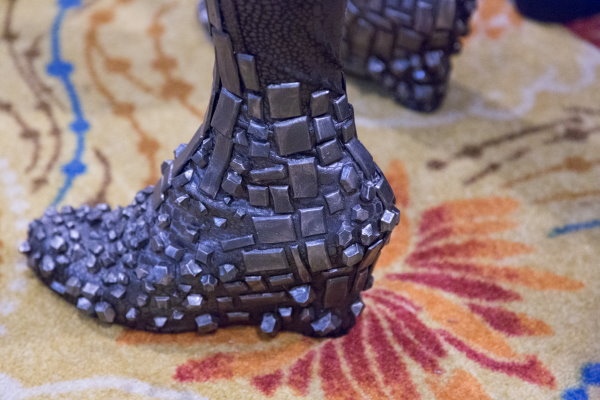 Photo by Ionus Photography
You know how sometimes one of your costumes will have a piece that you didn't think twice about, but that people seem oddly fascinated by? On this costume, it was the shoes. People were so fascinated by the fact that they were seamless with the bodysuit - rather funny, since it's just a sort of fancy sock!

Anyway - that's all for now, and even though it's not perfect, I'm still pleased with how it came out, and it got a great reaction at the convention.

You look fabulous!! The shoes are fascinating, but so is the headpiece! They both just look incredibly professional. I love the shot with the tardis too.

Interesting how in some photos its gray and others its blue tinted. Which is more true?

Do you mind if I send a photo of this to Whovian? He's no longer on the board, but I know he'd love to see it...

Darn! The urethane paint system I have used appears to no longer be available It was really good! BJB SC-89 was available as a gloss and as a flat paint base and is super thin and flexible. http://www.bjbenterprises.com/pdf/SC-89.pdf This is the stuff, but the product doesn't seem to be available on their site any more. What makes it great is that it can be thinned and brushed and while you need to be careful when it is curing once it is cured it is stuck. Okay seems they may have updated to a waterbased solution: http://www.bjbenterprises.com/pdf/SC-92.pdf And yuss!
SC-92 Water-Based Coating - Coatings - Polyurethanes

If it works like the original product then I highly recommend it.

Gurii, it's definitely grey, sort of a graphite/duct-tape color, but with blueish undertones. I was surprised at how the color shifted under different lights! The original has (as has just been confirmed to me by someone who saw it live) a lot of different blue/violet/oilslick tints in with the silver/grey, so I'm going to see what I can do to work that in, maybe with colored rub-n-buff or transparent inks. And, yes, feel free to share with anyone, of course!

MDB, thanks for the tip! I'll definitely look into that!

ooohh, oooh, ooooh interference? Pearlex probably is the fastest easiest way to get that effect:
Jacquard Products - Pearl Ex Pigments
Actually the base would probably stick over the Rub n Buff too.... 671-673 is what I have These look like white pearl in the jar but do give the oilslick splashes of colour.

Duo tone is also pretty subtle. I have the blue/green and in the jar it looks like turquoise but it is very translucent and trends more to the green when applied to a surface. That purple green is so tempting.

'Hand of Fear' has always been one of my all time favourite stories.
And I think you captured Eldrad superbly, it looks brilliant.

Well done, I bet it generated lots of interest.

MDB, thanks for the recommendation - that's some cool looking stuff! I will definitely have to explore that!