So I've had my SS X-wing for some time, built by the legendary Jason E. For years I wanted a nice display base for it. Never had time until now.

I always envisioned a death star display base as seen previously, but something with more kick to it. Hence the start of this project!

I recently finished the box that will be covered with DS tiles to emulate the surface. The SS model will obviously mount above the surface. 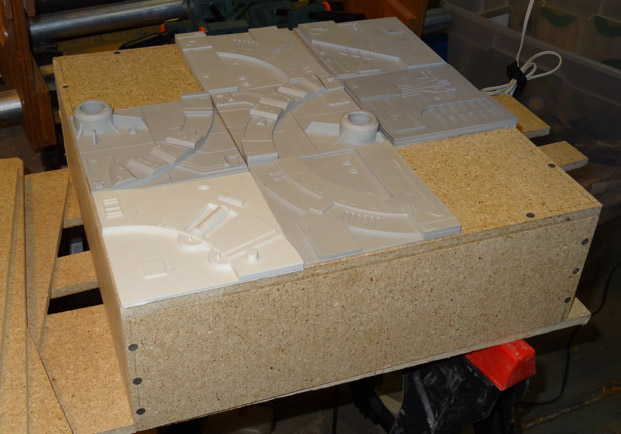 There will be motion activated sounds of different x-wing or R2 sounds that can be also selected by buttons. Other lighting effects will play out with the sounds, basically explosions on the surface and maybe some green turbo laser firing.

The addition is the custom X-wing targeting computer (working) screen that I will add with other lights and sounds. I tried to best emulate the screenshots seen in Ep 4.

I was thinking of putting this control panel on one of the center sides of the box, acting as a master control. This main screen will be interactive, letting the user select a couple different screens.

Here is what I have for the actual layout so far:

Let me know what you think. If anyone has additional ideas I am all ears! Been quite a long time since I have been able to put time into a personal project like this, so I am stoked...

Look great so far. I'm doing something similar with my large scale at at diorama. Got the raw at at and snowspeeder sounds from star wars .com. Which d/s tiles are ya using?

Cool. Yeah I have plenty of sounds as well. I am figuring out where to mount the amp and speakers in the box so it isnt too muffled. I may end up drilling holes for sound.

I played around with the idea of having a servo move the xwing around when sounds are playing, but I didnt want to get too fancy. The custom electronics board I designed will control a couple servos too. I wanted to make a proton torpedo effect too but shelved the idea. I hope to make a large explosion light effect come from the top surface. Plus there is always version 2.0!

I cant remember who made the DS tiles, bought them off here many many years ago. After watching ANH I recognized several during Red 1's demise...

Just got the display box painted up. Finished the targeting computer display and wired it all up. Probably the most complex piece of electronics I have done in some time!

Here is a pic.

Next is installing all the electronics in the box and prepping for the tiles.

I am thinking of simply velcroing the tiles onto the box, to make it easier to change them around if need be. Any ideas?

Box mostly done. All electronics installed, speaker and sound module mounted, xwing wired up. Just need to get rest of the DS tiles mounted! It's getting there, I am really digging the lights and sounds...

Sweet..... Need pix. Do you need some mini death star towers? I'm casting some up at the mo.

Thanks, I hope to take some pics soon. I have some of the tiles mounted now just to get a visual of what it will look like totally finished.

Some DS towers would be sweet! Not sure if they would match the scale, but let me know. Would love to see pics of them too.

Here ya go. Will be casting this weekend.

RPF PREMIUM MEMBER
The tiles that Jim is using are mine. It's nice to see them out there still

These were the version 2.0 I did that were all laser cut.

JDH, do you still offer the tiles? I sent you an email. I am short on tiles to finish the box and need to acquire some more.

jedimaster, the towers look cool. Keep me informed! BTW, where did you get your DS tiles?

hyperdyne said:
JDH, do you still offer the tiles? I sent you an email. I am short on tiles to finish the box and need to acquire some more.

jedimaster, the towers look cool. Keep me informed! BTW, where did you get your DS tiles?
Click to expand...


Yeah I do just let me know which tiles you need. I will get you a price.

Will do, mine were from minifig here. The tiles the tower are sitting on are 6x6. Looks as if ya got matching ones now anyway but I will let ya know when I'm done with the towers.

Here is a pic of the base as it stands now. Need to finish the exterior and paint the reset of the tiles before mounting.

Here is the first test video. The box has so many different features they are best left to video.

I hope to get the trench run with targeting computer simulation up too.