RPF PREMIUM MEMBER
Since I've been recovering from a surgery that keeps me from being able to do much getting up, I've started tinkering with my Bill's Replicant Blaster - but while I waited for paints and parts to come in (Thanks DaveChaos for sending me replacements for the bits I stupidly broke), I've decided I'd spend some time practicing painting on a model that isn't as intricate, has no moving parts, and is really there just for me to experiment with painting techniques and styles.

Since I first saw the Tenth Doctor finale, "The End of Time," I had been fascinated with the Webley Mk IV revolver - something about the shape of it, and the strangeness of seeing the Doctor hold a gun (although in the time that's since passed I know now that that's not quite as rare as the character likes to think). 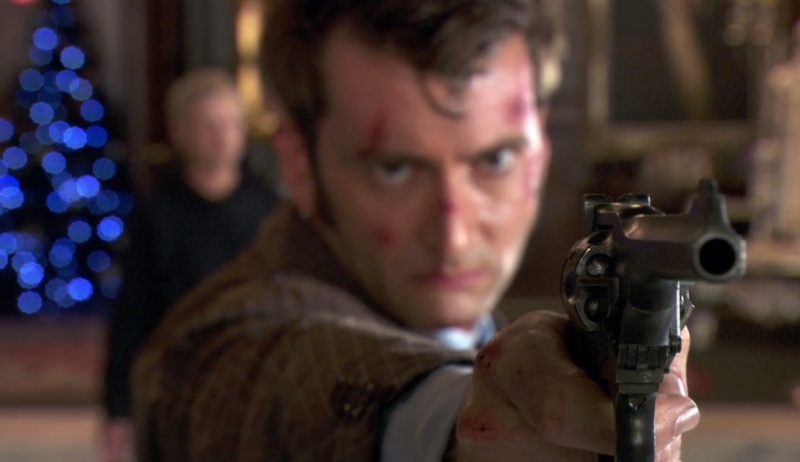 I found a 3d printer on Etsy who made such a model recently and ordered it that night.

It finally came in today! And except for a small breakage where the poorly packaged model was forced into my mailbox, with a box forced on top of it, it looks pretty good! Here's a picture of it before I did anything to it, except for gluing back on the horn part of the hammer: 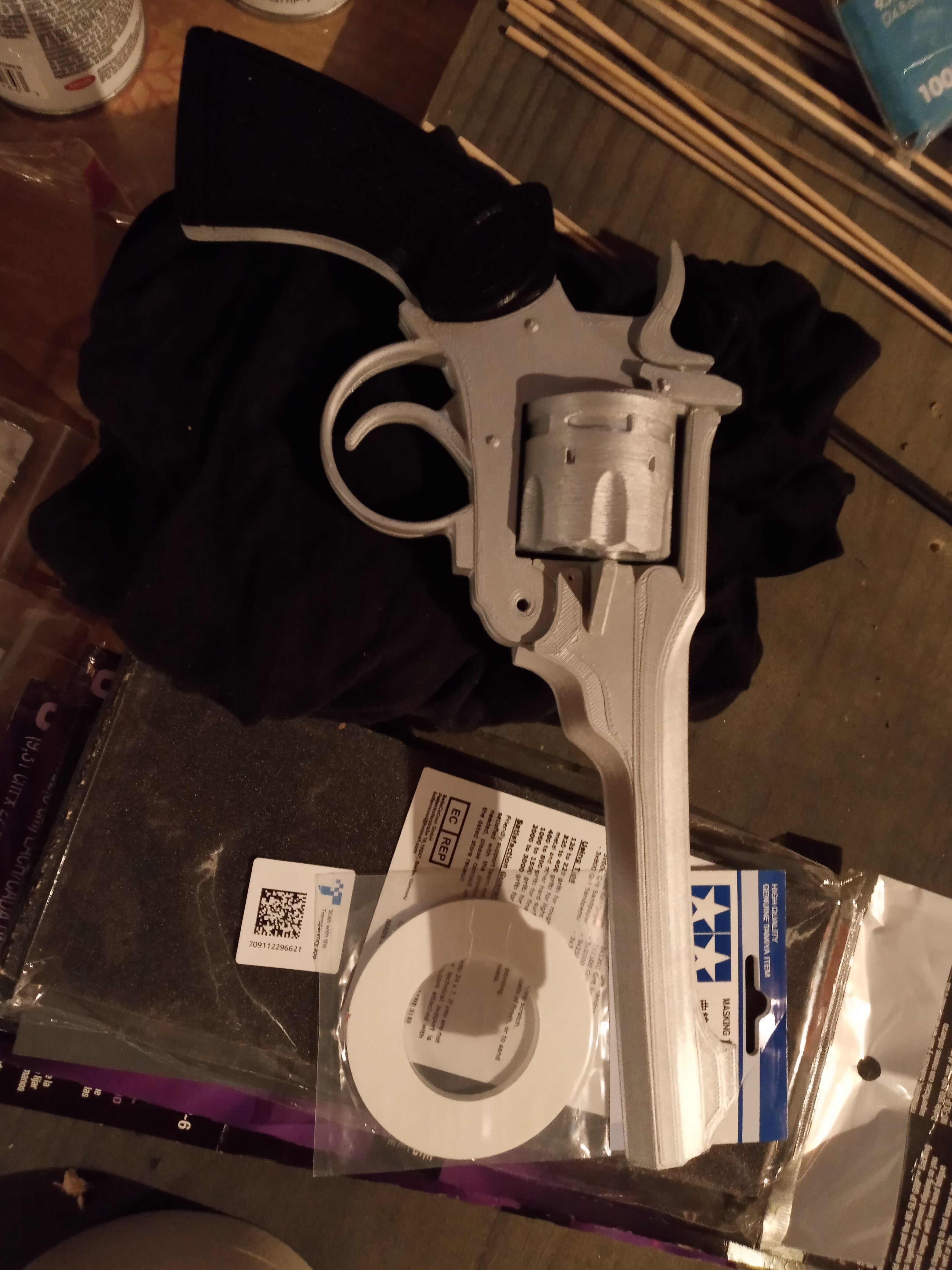 First thing, I did a lot of research and found that the best way to handle PLA such as this is to hit it with a few coats of filler primer, and then wet sanding once it's fully dried, which apparently takes about 24 hours. 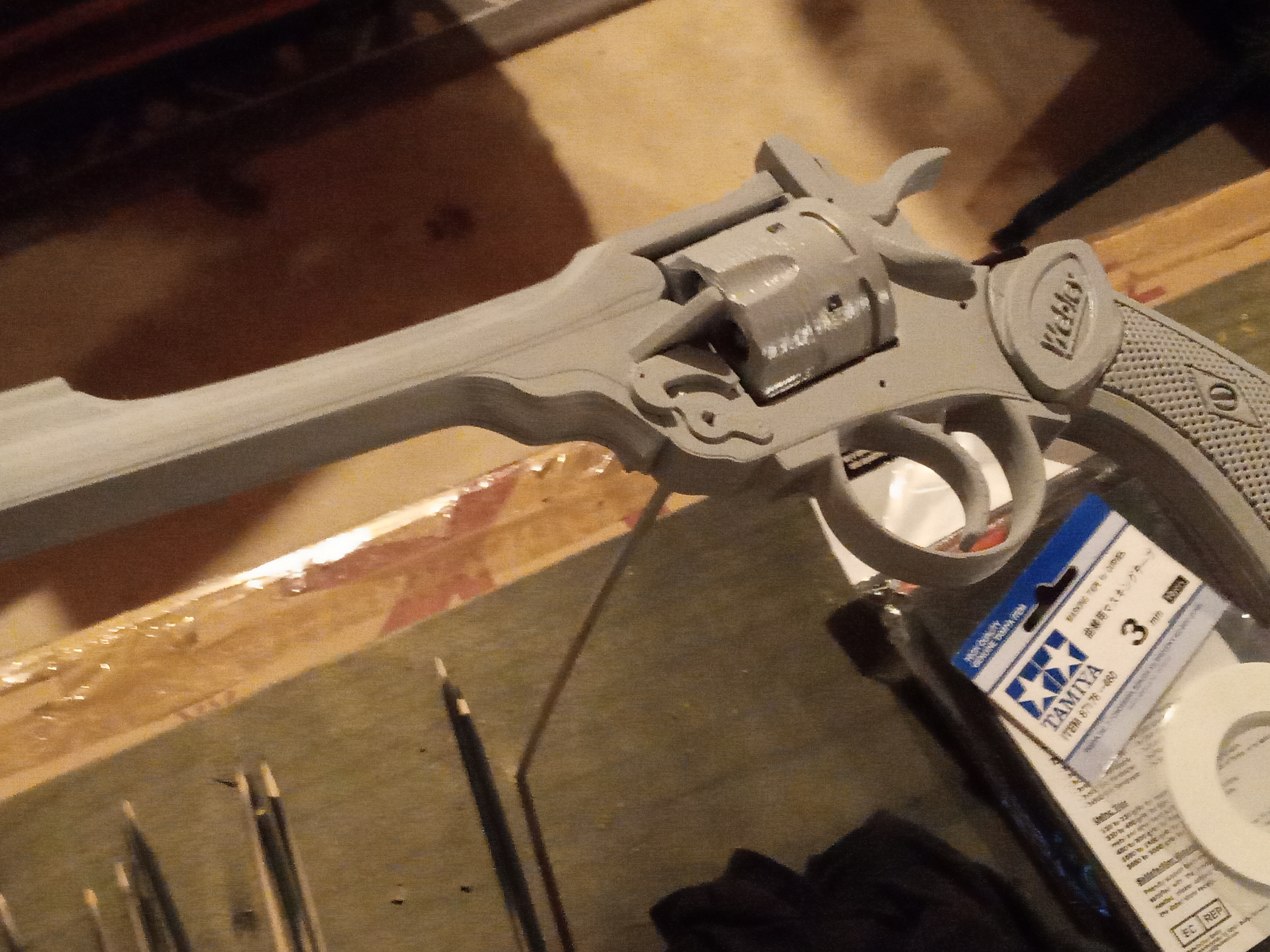 The model drying precariously on its post after three coats of filler primer. Already looking much smoother!

Tomorrow once I'm home from work, I'll begin the wet sanding process and will update you guys when I'm all done with that. I'm waiting for a Humbrol steel spray paint that should give the model a realistic metallic finish.

Once painting's all done, I've also got a solution for the lanyard ring on the bottom of the grip - thanks to Wayouteast's help finding the right things to start searching for, I ended up with, like, a million pack of pretty good looking gunmetal colored lanyard rings for... purses? I think? But it'll definitely serve my purpose and I'm very much looking to adding that on at the end.

In the mean time, as I was waiting for all this stuff to come in, I was greatly inspired by SchubroProductions's Timelord Toolbox, and wanted to give a similar container for my screwdrivers a try too. Since moving a bunch of stuff off my desktop space in my home office to make room for retro computers, the sonic screwdriver collection was spending its time crammed inside a file cabinet.

I didn't have the budget for wood to assemble the box from scratch, but I did find a pre-made thing from a craft store which I figured would look pretty great once I got my hands on it. 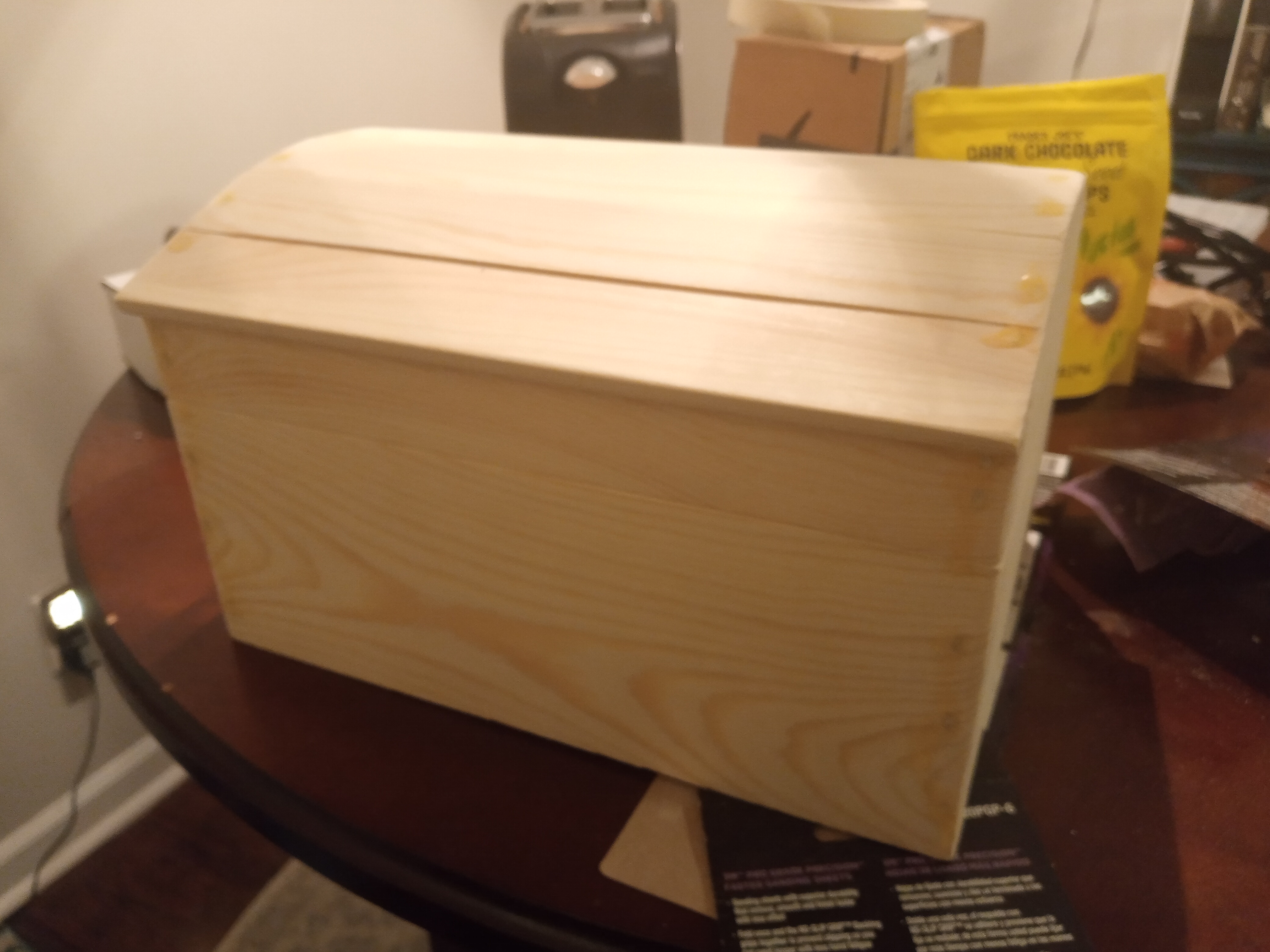 First step was attempting to fill in some of the holes left by large staples in the box, and then sanding down those glue spots so they'd be flush with the box. After that, I used my laser printer to print out the Seal of Rassilon and used the transfer bit of a wood burner to transfer that to the wood box. After transferring the design, I went back with the wood burner to properly burn the design into the wood. As it turns out, it was a bit harder than I anticipated - I'd burned designs into wood before, but trying to get one that wasn't my own work to burn in accurately was a challenge! 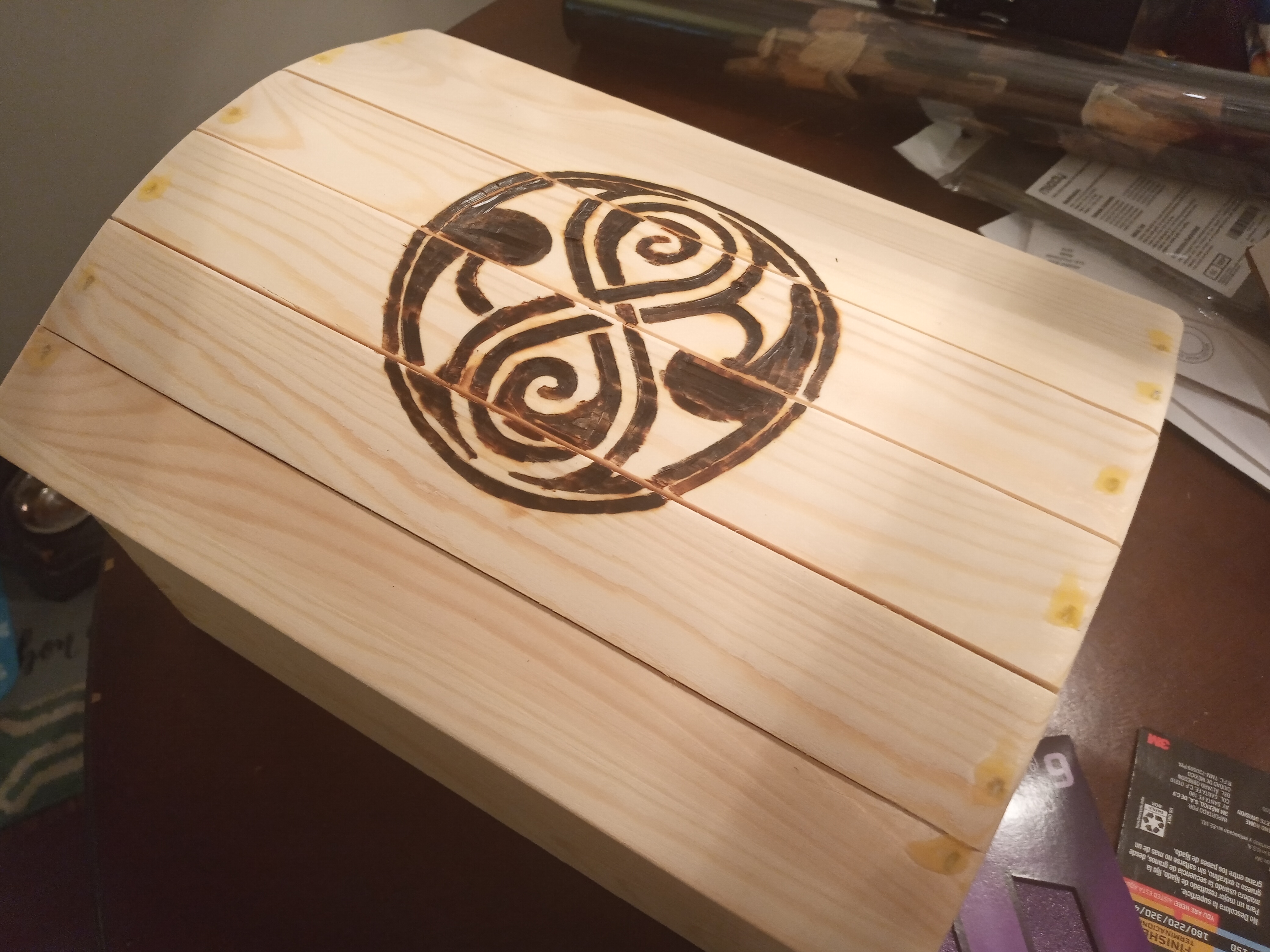 Overall, it came out lumpy, but I figured because I'd be beating the hell out of the box shortly it should even itself out sooner than later.

The next steps, I regrettably did not take progress pictures for. First was a couple of passes of wood stain, followed by a black acrylic wash, wiped off with paper towels. Then I attached brass closures and feet to the box to give it the appearance of something that was at one time fancy, but has been bouncing around the TARDIS for years and years. To weather it, I used just about every tool I own to beat the hell out of the thing. It looks much brighter in this photo than it truly is. The end result was a dark, aged finish I am really happy with. It helped to hide some of the crimes of the lumpy wood burning job as well. 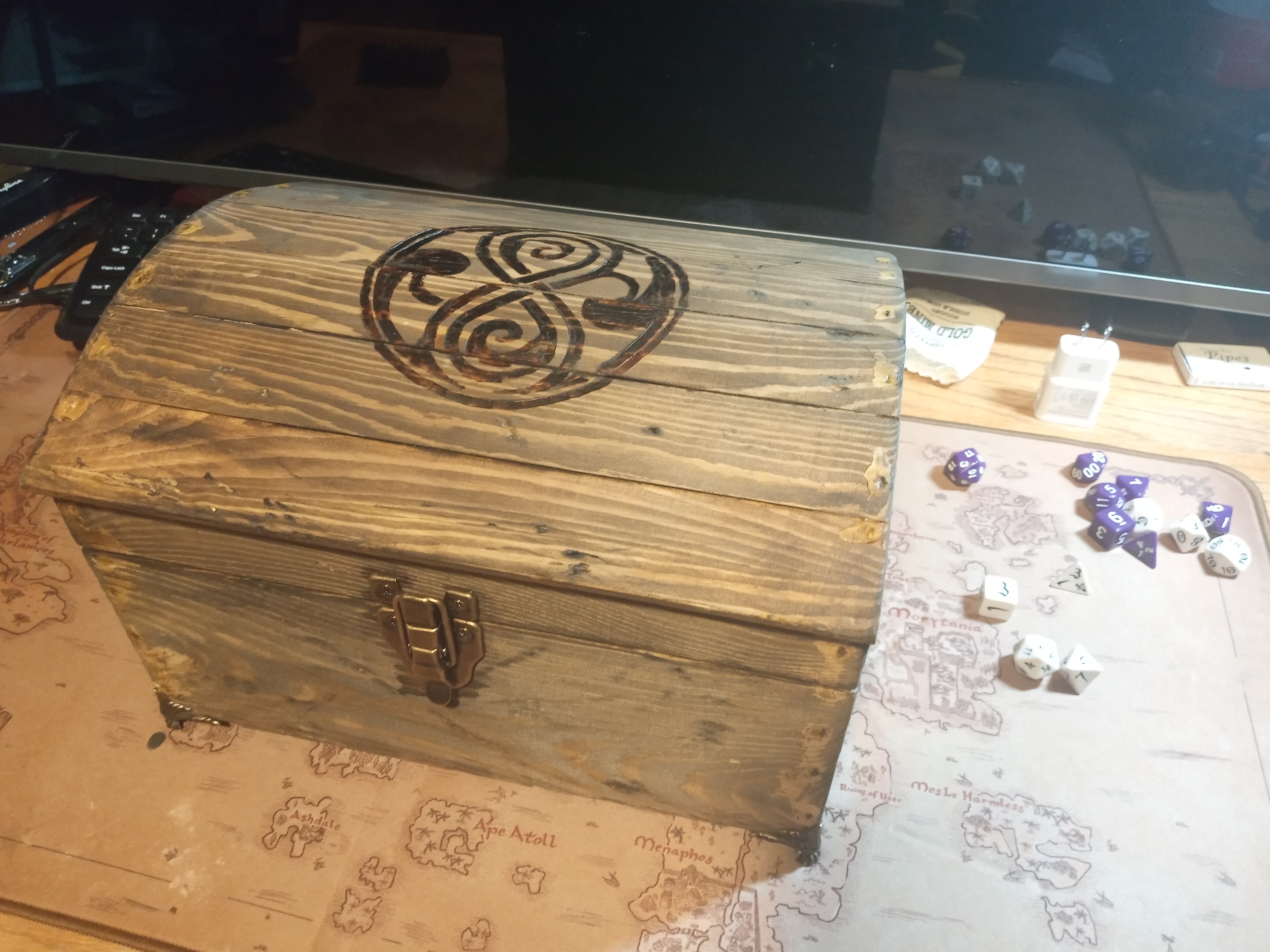 The final step for this box, of course, is filling it with my Sonic Screwdrivers! 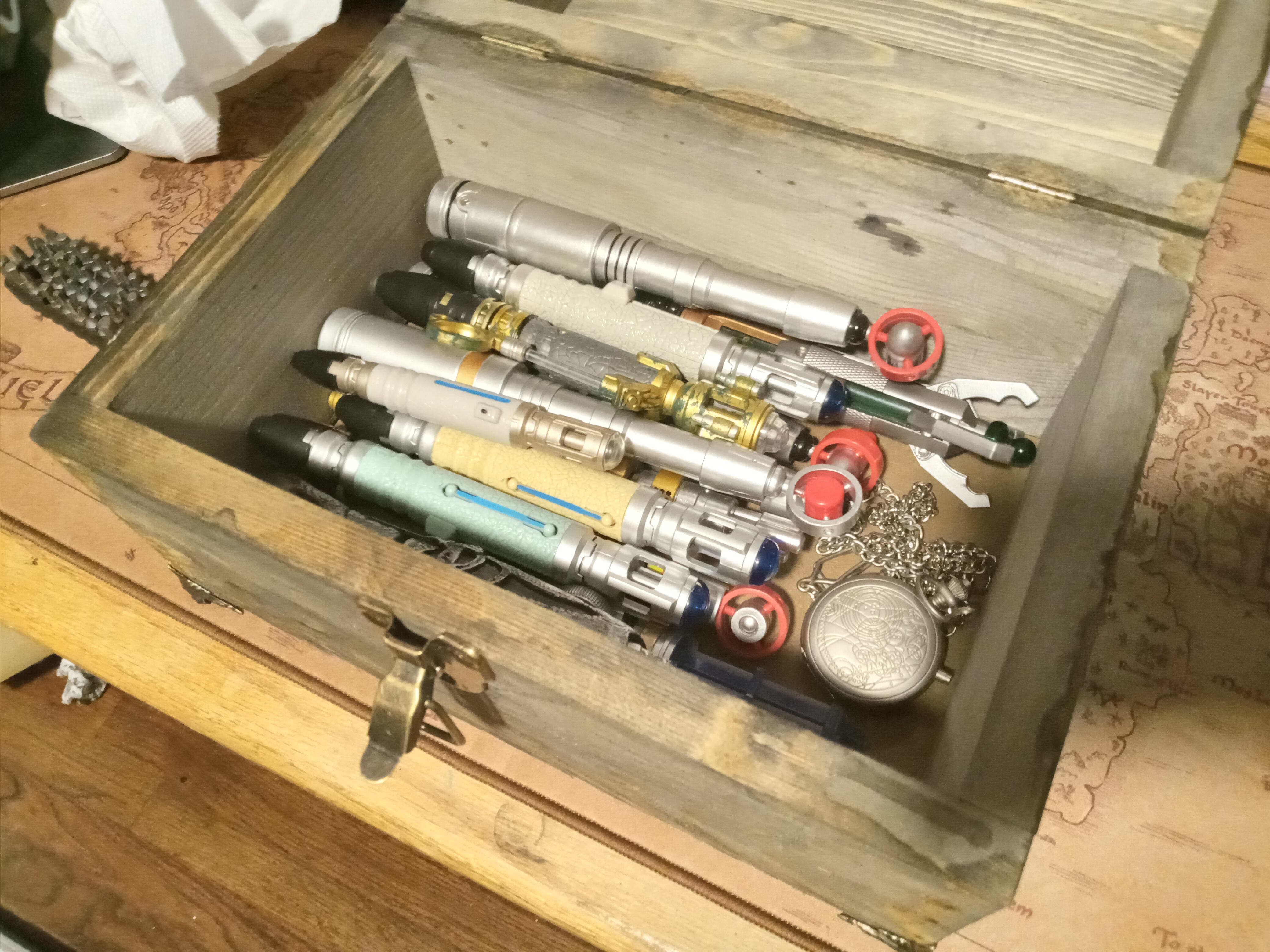 RPF PREMIUM MEMBER
Interested to see how the revolver works out for you. Looking good so far

Krats said:
Interested to see how the revolver works out for you. Looking good so far
Click to expand...

Thank you! Tonight will be the wet sanding process, starting at 120 grit and working my way up. The Humbrol paints are currently floating in the aether of shipping (DHL and USPS can't agree where they are) so I'll mask all the steel bits off for now and paint the grips a glossy black... I think. Maybe satin. Hard to pick!

RPF PREMIUM MEMBER
I think at this point I'm quite satisfied with the filler primer/sanding method! After I waited 24h for the primer to dry, I wet sanded using 150 up to 3000 grit sandpaper. It feels amazingly smooth!

Tomorrow I'll mask off all the "metal" bits and spray on the black for the grips. My Humbrol paint is still floating in the aether. Neither DHL nor USPS can identify who actually has my package or why it managed to end up in the next town over, and then fly back to Colorado inexplicably. Ah well! I've got some blade runner stuff I can work on. 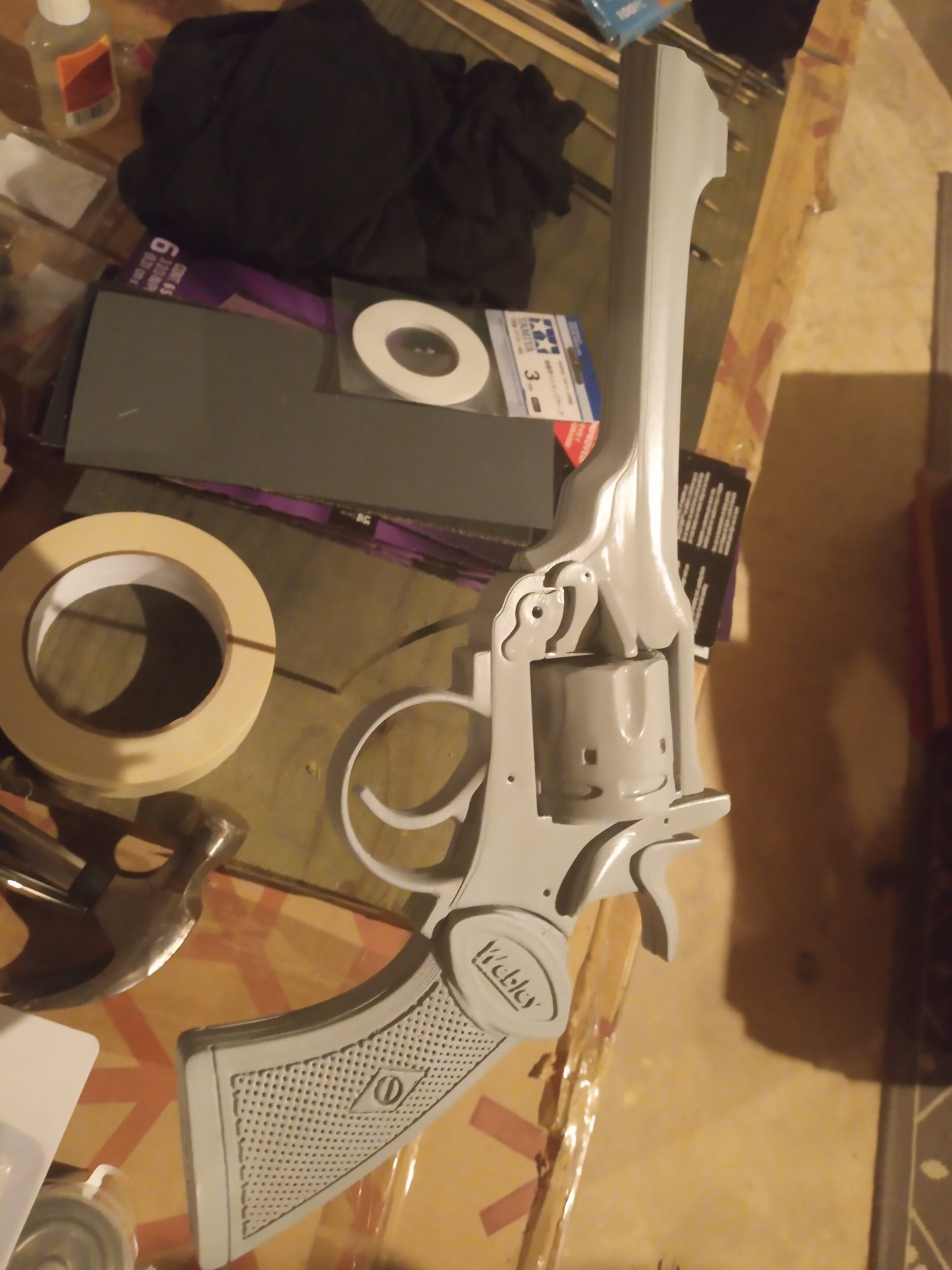 RPF PREMIUM MEMBER
The worst has happened, and the humbrol paints I ordered are all but lost. No matter - does anyone have any idea what sorts of rattle cans I could purchase to match this color? I'm not convinced gunmetal is the right choice, it seems like gunmetal would be too light. I'd also like to be able to buff the paint to a faint shine if possible.

I appreciate any suggestions!
Here's my best reference image:
(Keep in mind that the grips are supposed to be black, so the colors are a little off in this photo.) 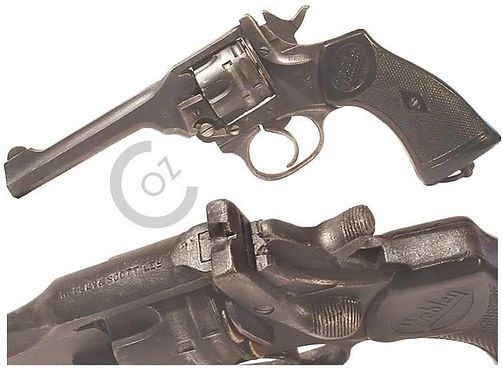 Update: I was able to find a guide which showed the brand of gunmetal I had originally wrote off as too bright and it actually looks perfect. Now to find a store near me that sells Tamiya paints!
Last edited: Jun 18, 2021

RPF PREMIUM MEMBER
When I did mine I used black rattlecan (semi-gloss I think?) and rubbed it down with graphite powder. It looks frighteningly convincing.

I second Krats technique!
and you can use Rub-n-Buff for bright highlights too.

RPF PREMIUM MEMBER
I snapped a few pics of an old Mk IV that I've had for over 25 years now - hopefully they might be of some help... 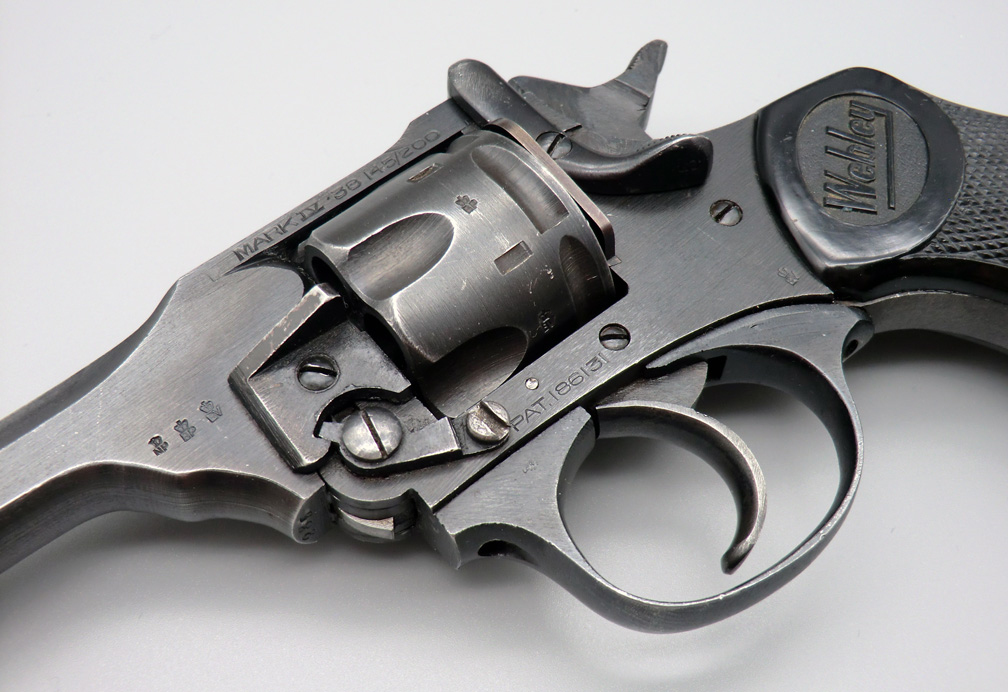 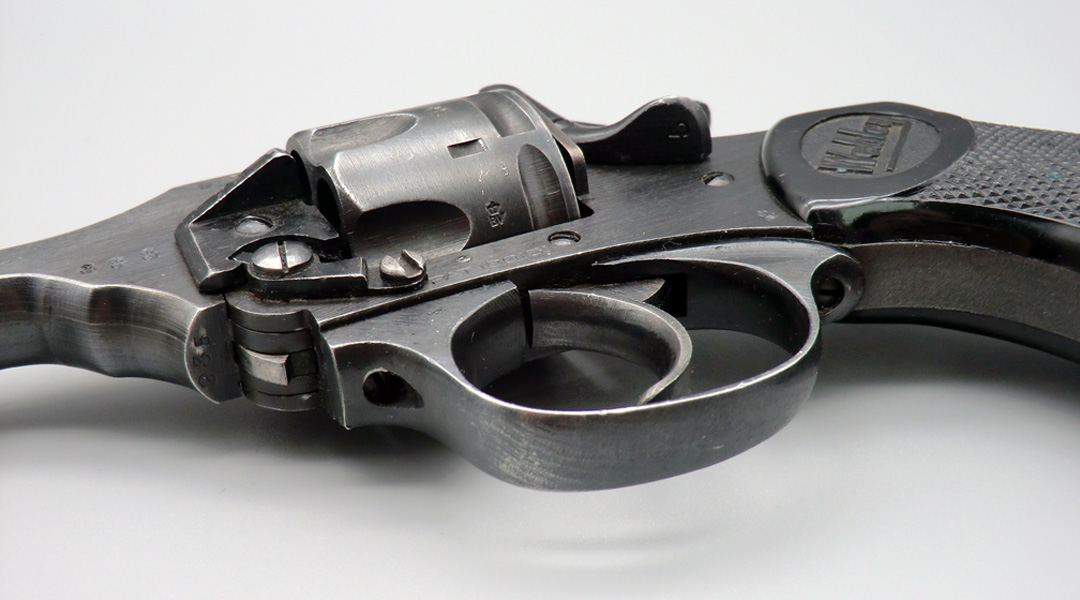 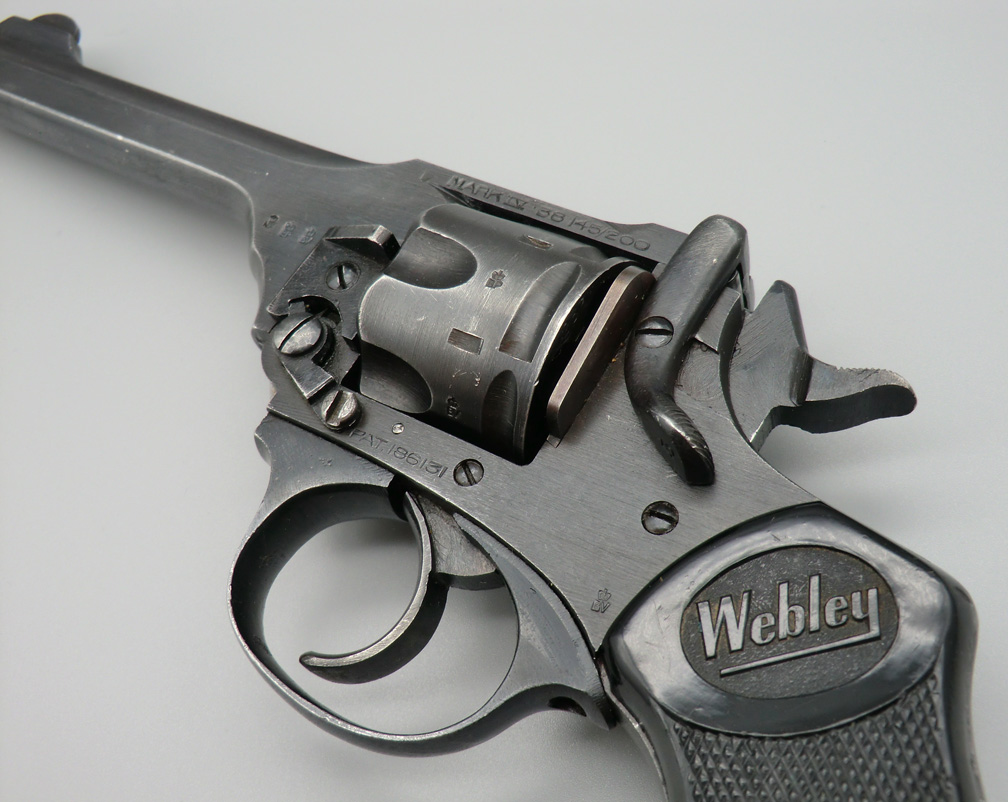 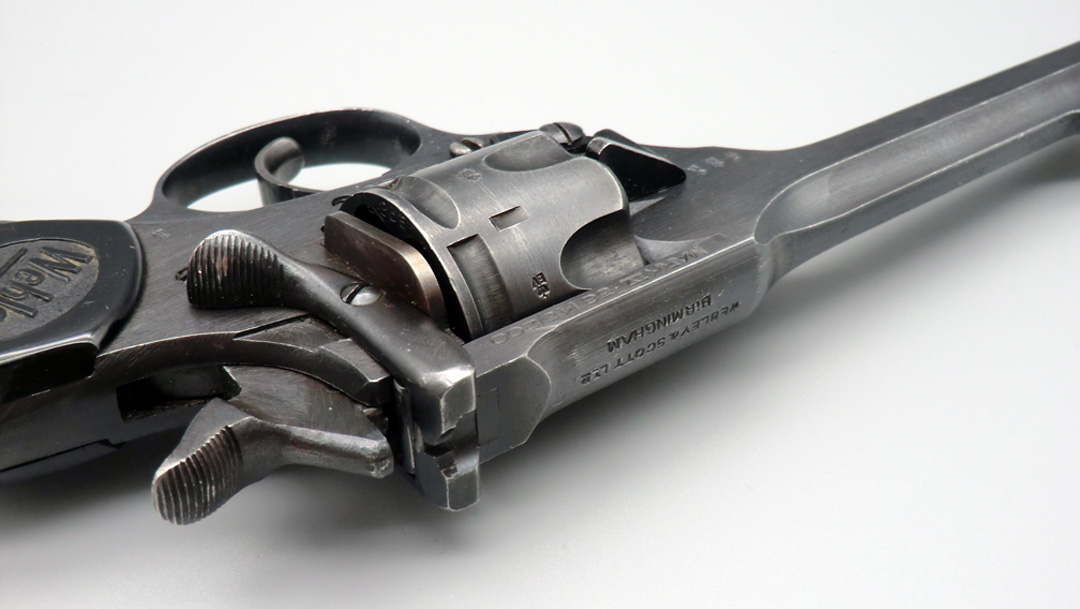 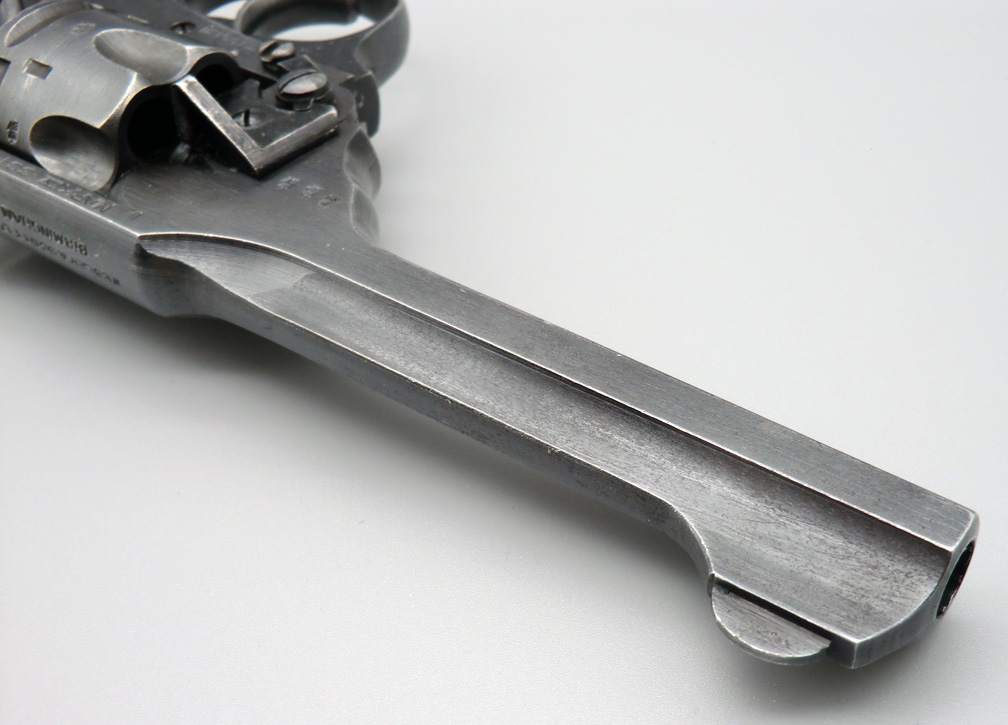 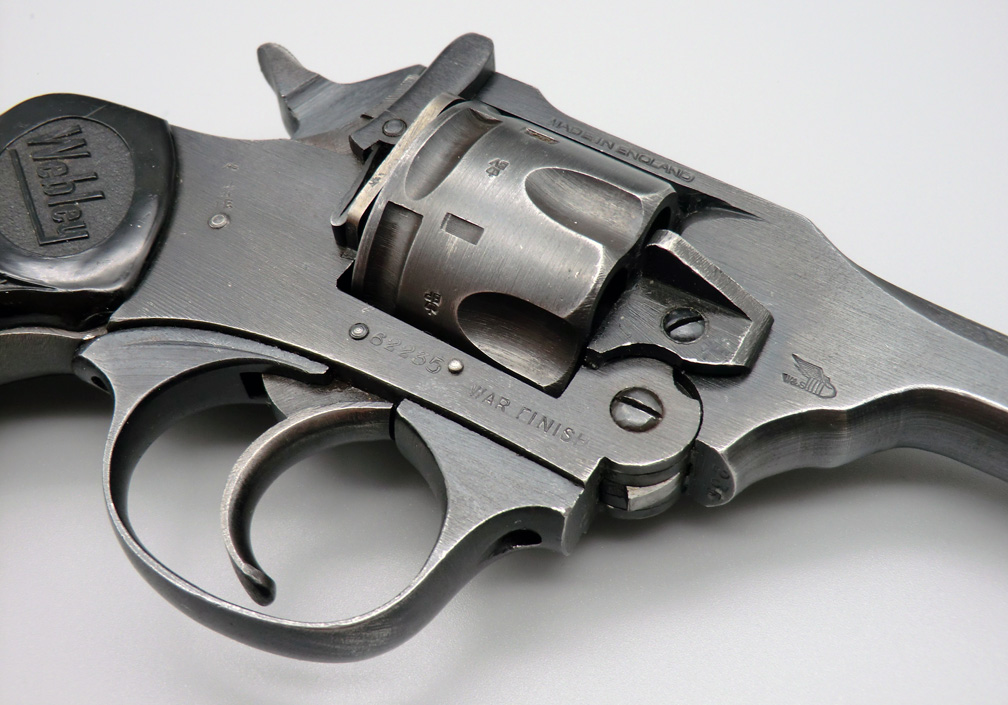 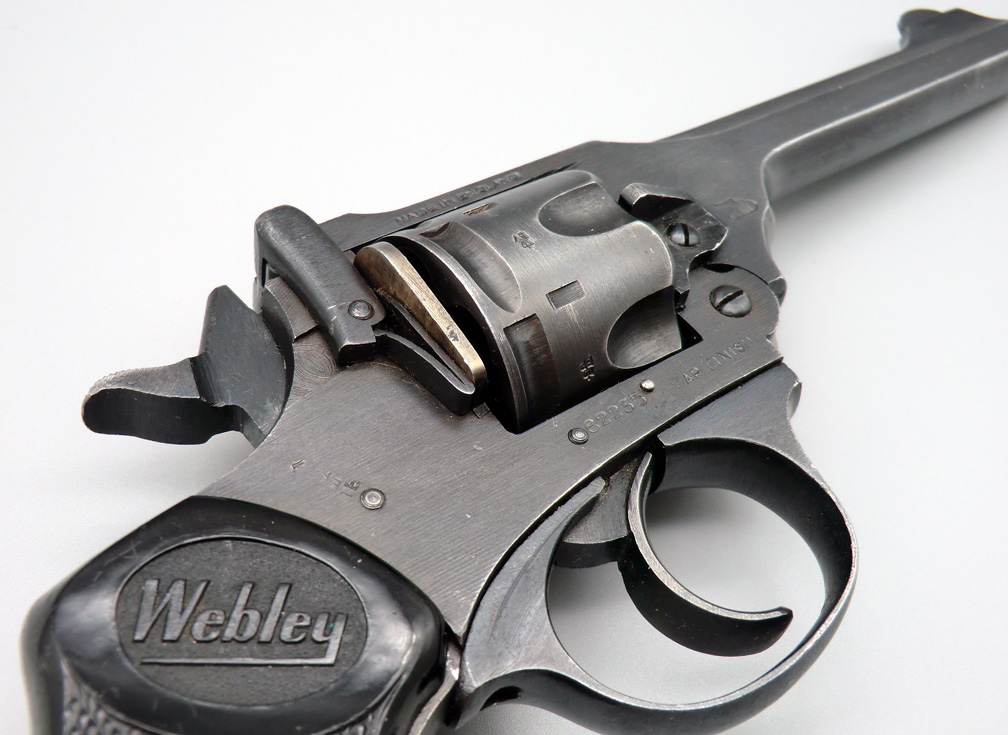 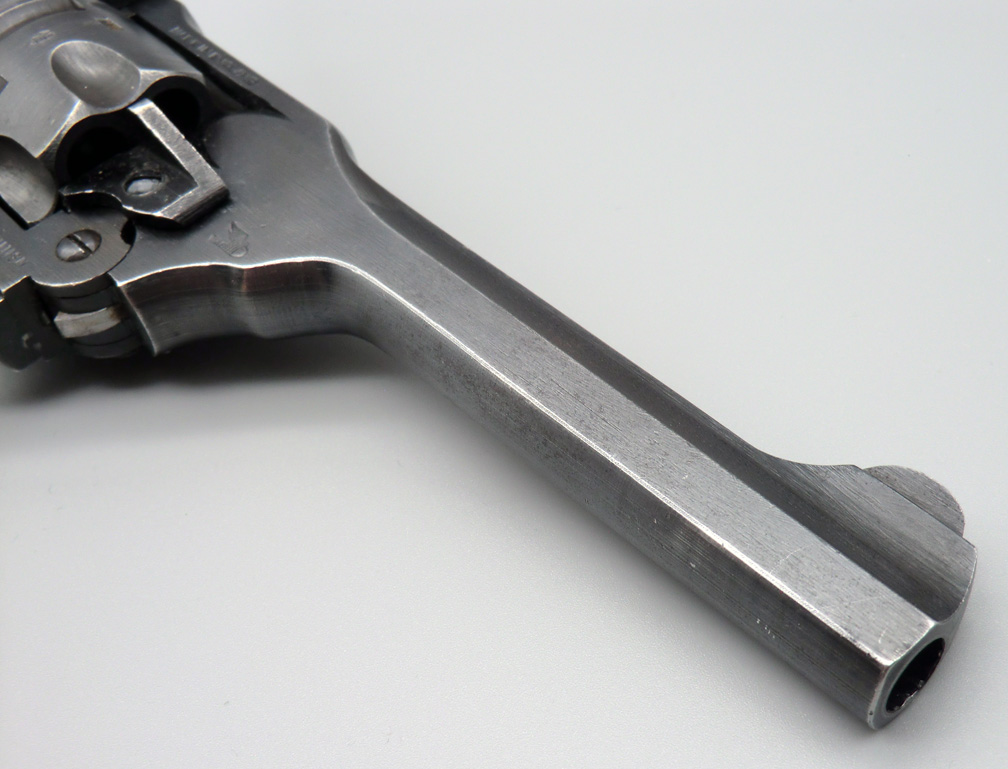 The 48th Ronin said:
I snapped a few pics of an old Mk IV that I've had for over 25 years now - hopefully they might be of some help...
Click to expand...

Whoa, thank you so much! These shots are amazing, I wasn't aware of the subtle brushed look to the metal. Looks like I sanded a bit too much!
Thanks you guys for the suggestion of the graphite powder. I'm gonna go to the craft store tomorrow and see what I can find!

In the mean time, here's a base gloss black coat to bring out the shininess of the upcoming grey. 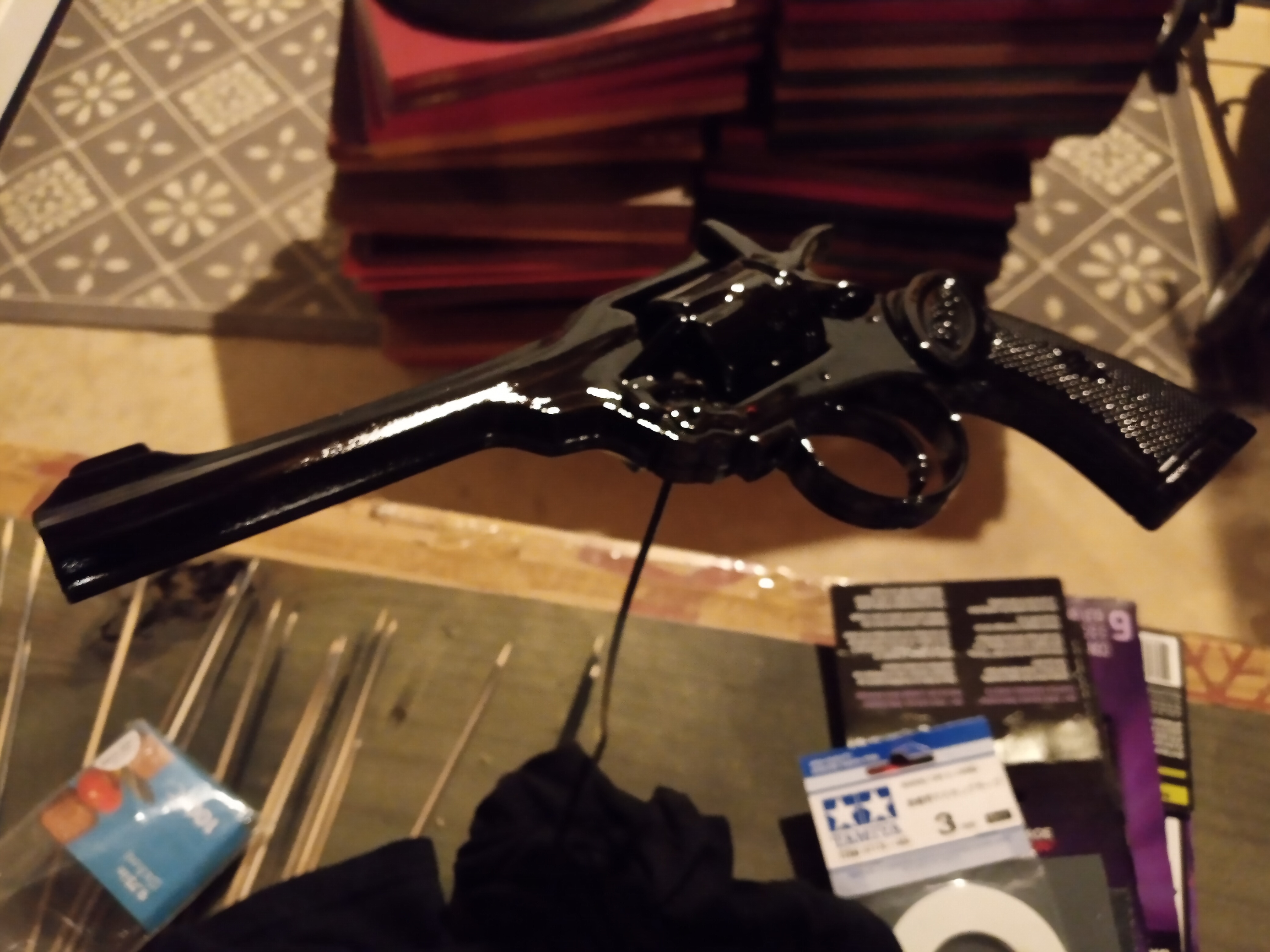 AjaxIronside said:
Whoa, thank you so much!
Click to expand...

No problem - good luck with your build 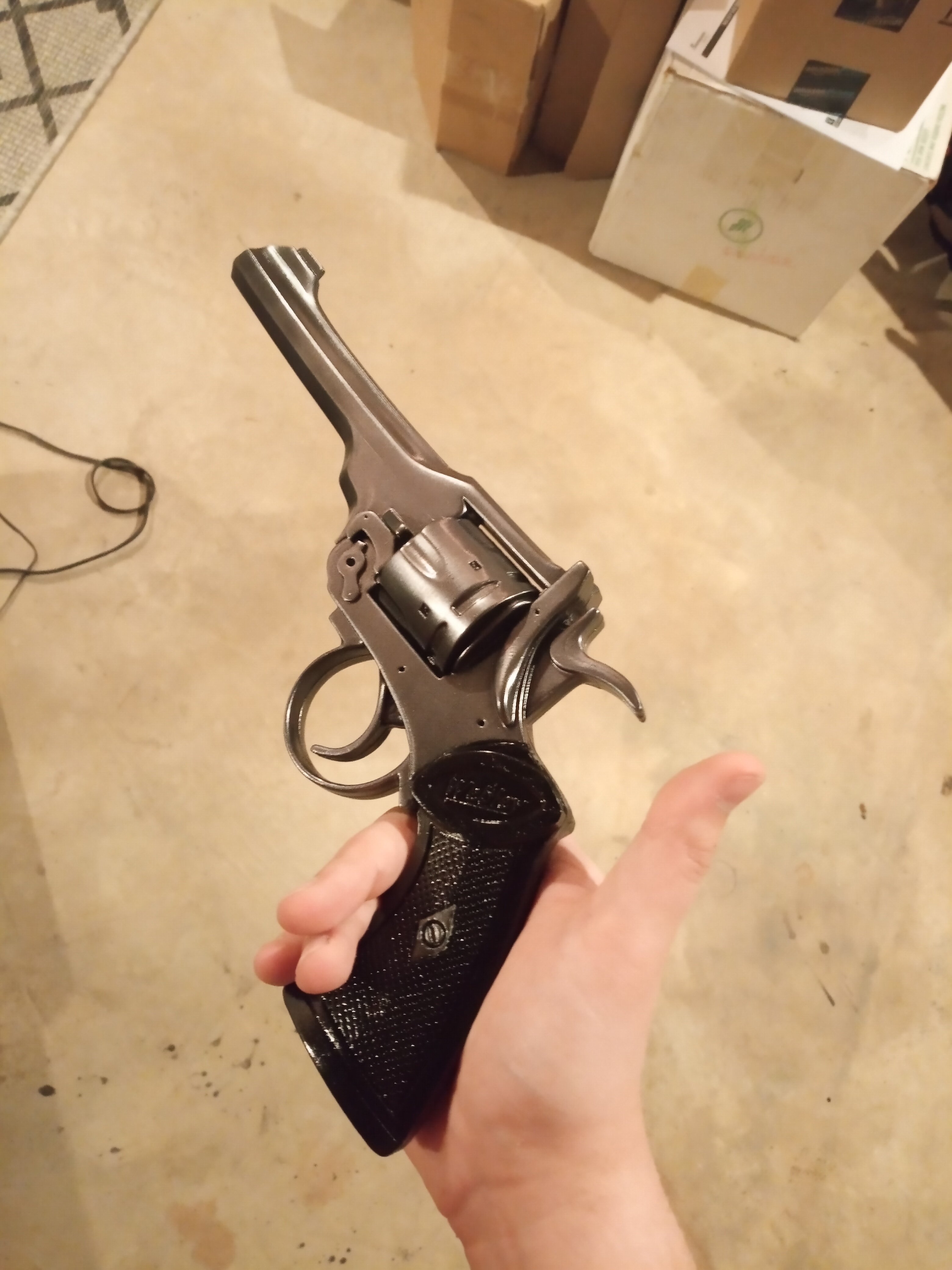 Painting done! Well... spray painting. Couldn't find any graphite powder, but the Tamiya gunmetal paint turned out great! Gave it a clear coat, and now I'm ready for an acrylic wash of black, and then a follow up of burnt umber. The lanyard ring has been glued since I took this picture, and is drying now.

Funnily enough, as soon as I got fed up and went to buy the Tamiya paints because the Humbrol ones clearly weren't coming, the Humbrol paints ended up showing up just as I pulled back into my driveway.

No big deal! I'll use those (at least the Aluminum color) for my replicant blaster, using everything I learned from this model to apply it. 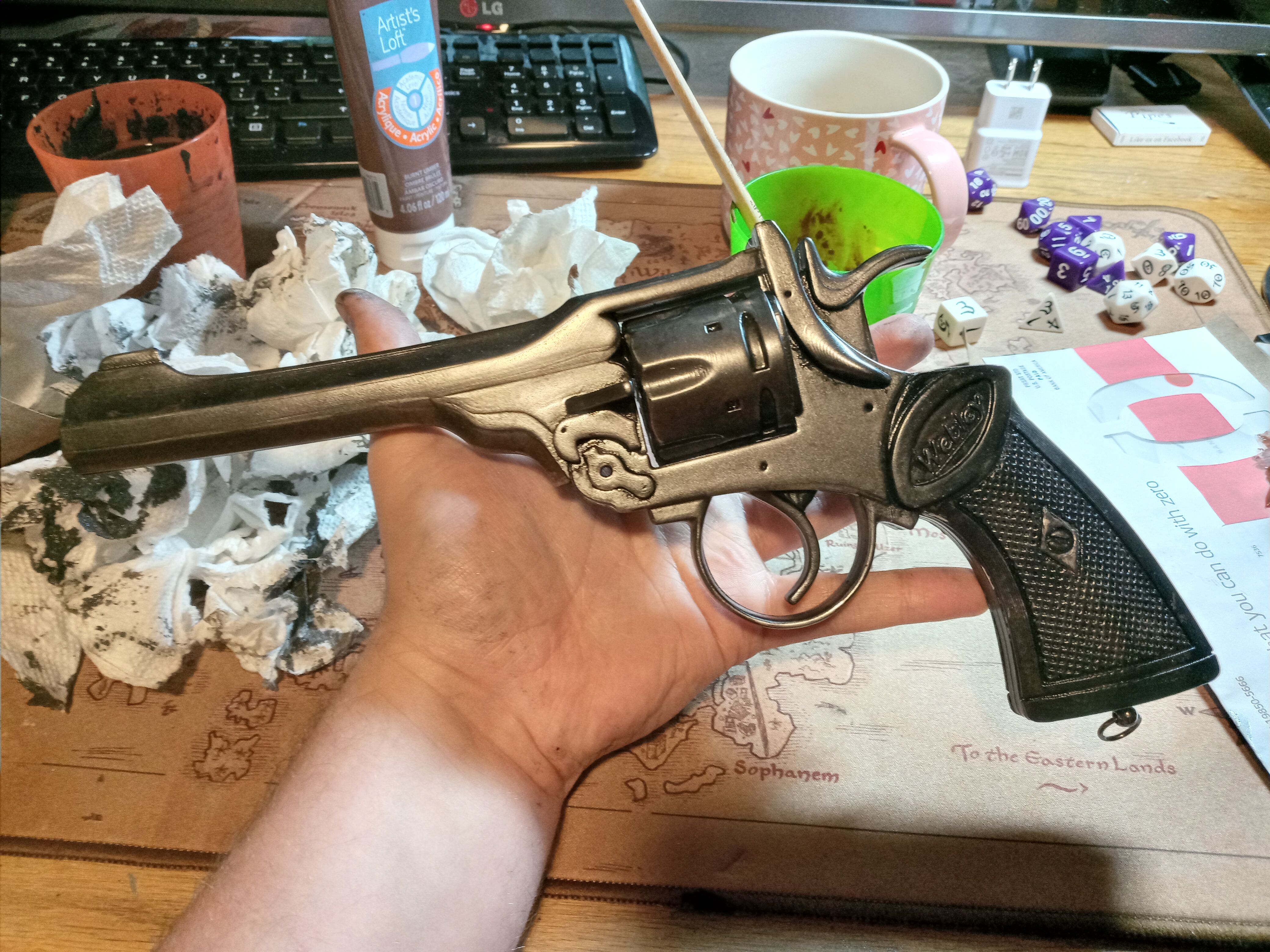 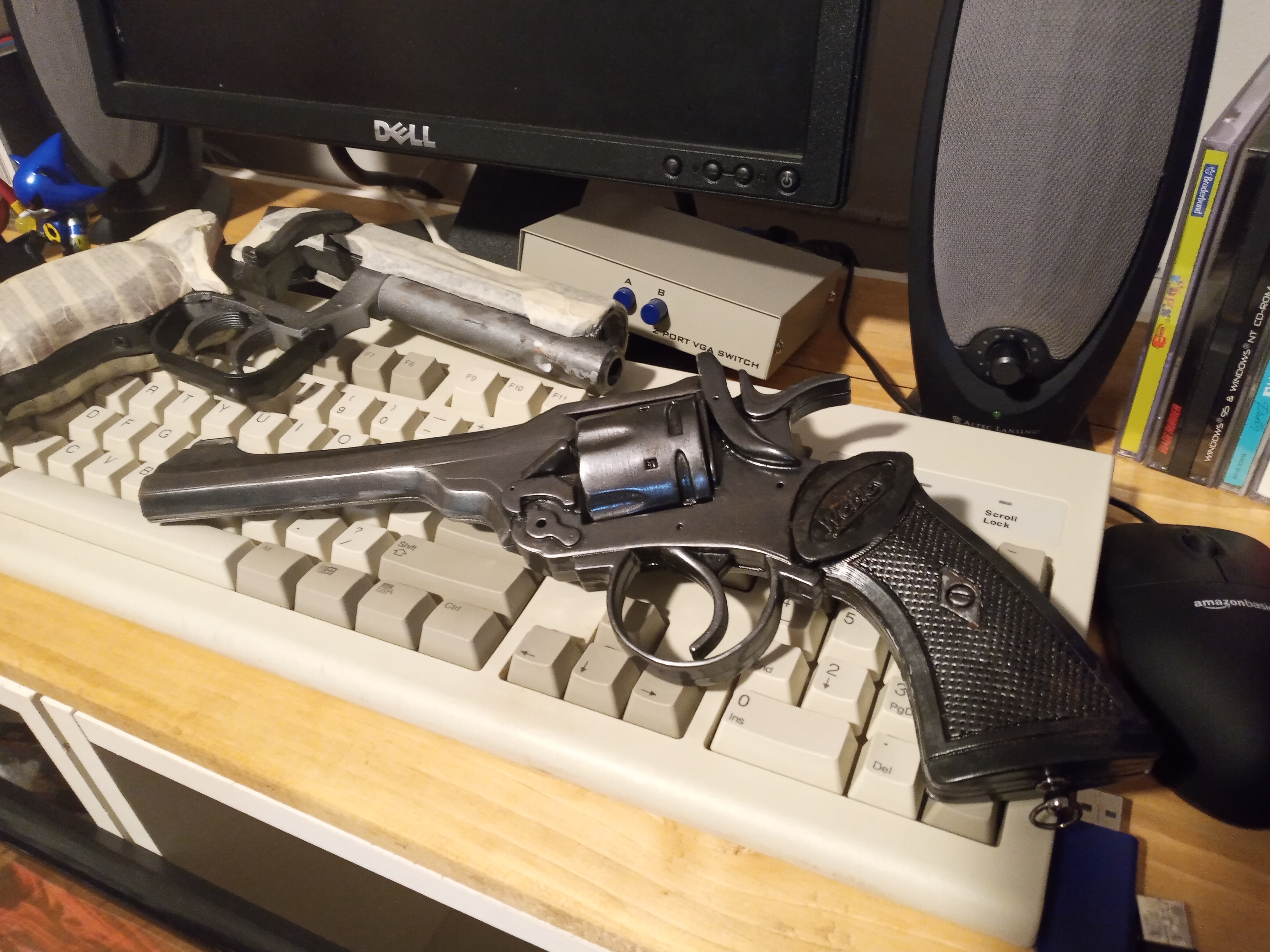 Weathering done! For now. This is after a light coating of rub n buff, and then washes of black and then some stippling with burnt umber. The idea was to keep everything relatively clean, but show the pistol's age. After all, Wilf never killed a man during his service, so the gun likely got little handling.

Overall, I'm really proud! Learned a lot through this whole process, and I think I'm ready to tackle some more intense projects, like fixing up my blade runner blaster, and starting a Constant K blaster as well.


The 48th Ronin said:
I snapped a few pics of an old Mk IV that I've had for over 25 years now - hopefully they might be of some help...
Click to expand...

That reference is invaluable, thank you for sharing.

Disney Store Raiders Idol anyone get in on it?
2