Why An “11th Star Trek Communicator” Will Likely Be “Found”…

RPF PREMIUM MEMBER
Recently, the topic of the long history of “fakes“ of original Star Trek props has come up for discussion, in various threads.

Ironically, as more and more information is known regarding these props, the time has never been better for unscrupulous individuals who may be motivated to follow in the infamous tradition of forgers of the past. Two factors are the reasons for this:
For these reasons, I believe that the fabled “11th Dummy Communicator / Preliminary Model” will be ”found”, within the next few years.

Here are the more specific reasons why:

1. Ideally, a forger would want to create a prop that is most likely to get the most value—therefore, a “Landing Party Prop”—but one that also cannot be tied to a known specific prop or image. The reason for this is, tying it to a known prop invites comparisons and scrutiny via screen caps, or other records, which a forger would not want. In addition, what do you do if you have claimed to have the original “Beta“ communicator and then the actual original “Beta” suddenly shows up? No, for these reasons, a forger needs to pick a prop that possibly exists but cannot be traced to any screen shots or identified models. What prop fits the criteria of “possibly” existing but lacking any screenshots? The fabled “11th Dummy Communicator” or “Preliminary Model” fits the bill perfectly.

This prop has never been photographed, or screen-matched, or even verified to exist, but it is referenced in an archival document: 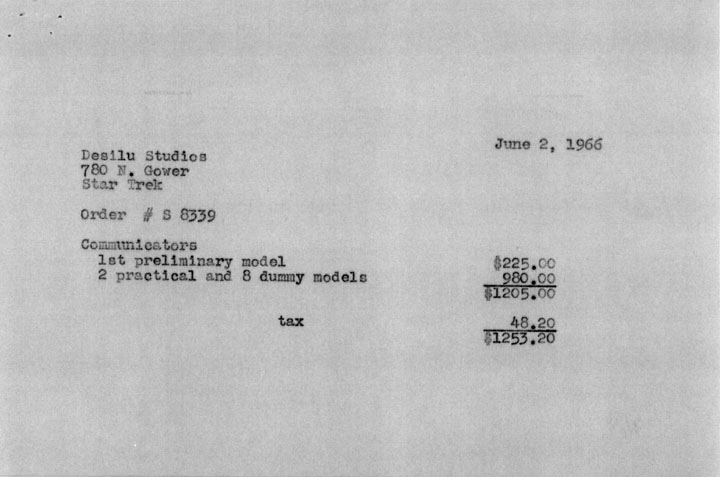 2. Documents to create fictitious provenance are easily obtainable. For example, Lincoln Enterprises used to sell production stationary, while the series was still being produced. Many collectors have this vintage stationary in their possession. A forger could use a 1960’s era typewriter to type out their provenance on this stationary. I believe that John Dwyer even identified a specific model of typewriter that the studio purchased en masse, in an interview, whose packaging material was used as “wall greeblies” on the TOS sets. This information is easily obtainable to a forger. 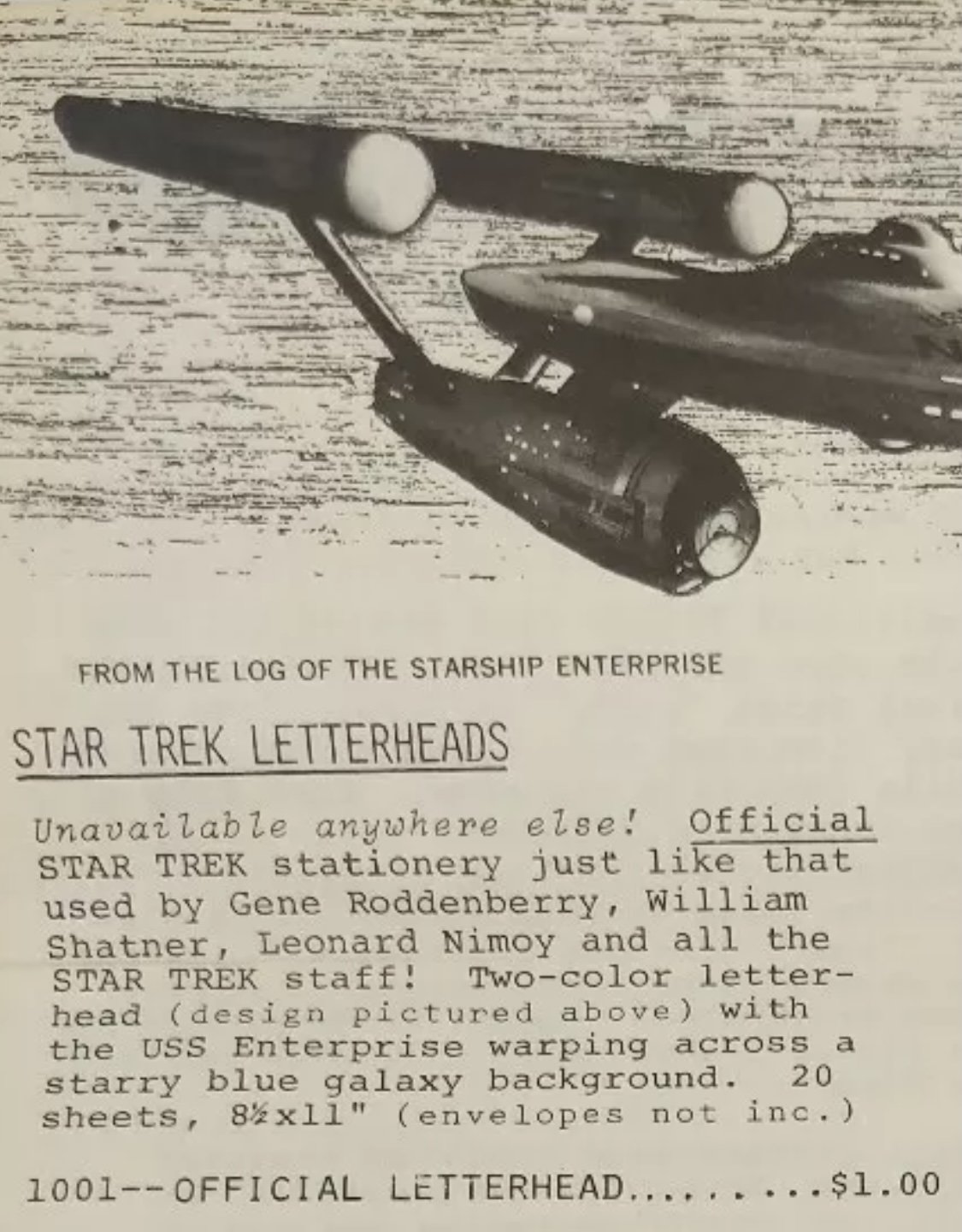 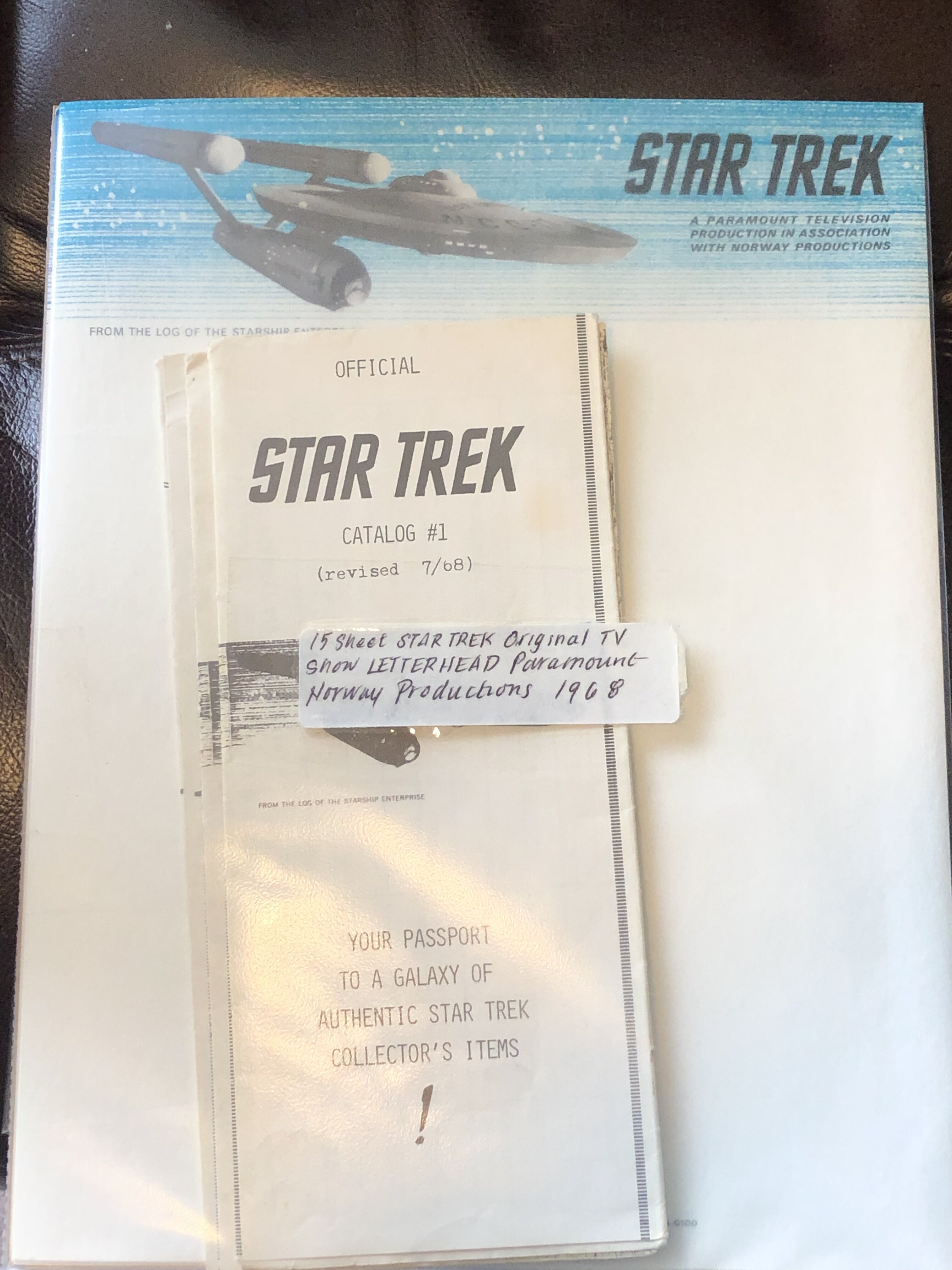 3. The number of production staff from the show who have, unfortunately, passed on and may be used as the fictitious source of a forger’s provenance is increasing . Unfortunately, as 1969 gets farther and farther away from us, this is easier and easier for a forger to do.

4. Weathering and aging the vintage stationary document is easy to do with minimal effort. The forger can make the provenance story as minimal as possible, while still clearly establishing this as the fabled “preliminary communicator model”. The document example, below, was thrown together merely for demonstration purposes, in under an hour‘s time, using a copy of vintage stationary, basic document weathering techniques, and around 10 practice attempts to freehand known examples of the signature. A dedicated forger, taking their time, could do a much more convincing job. 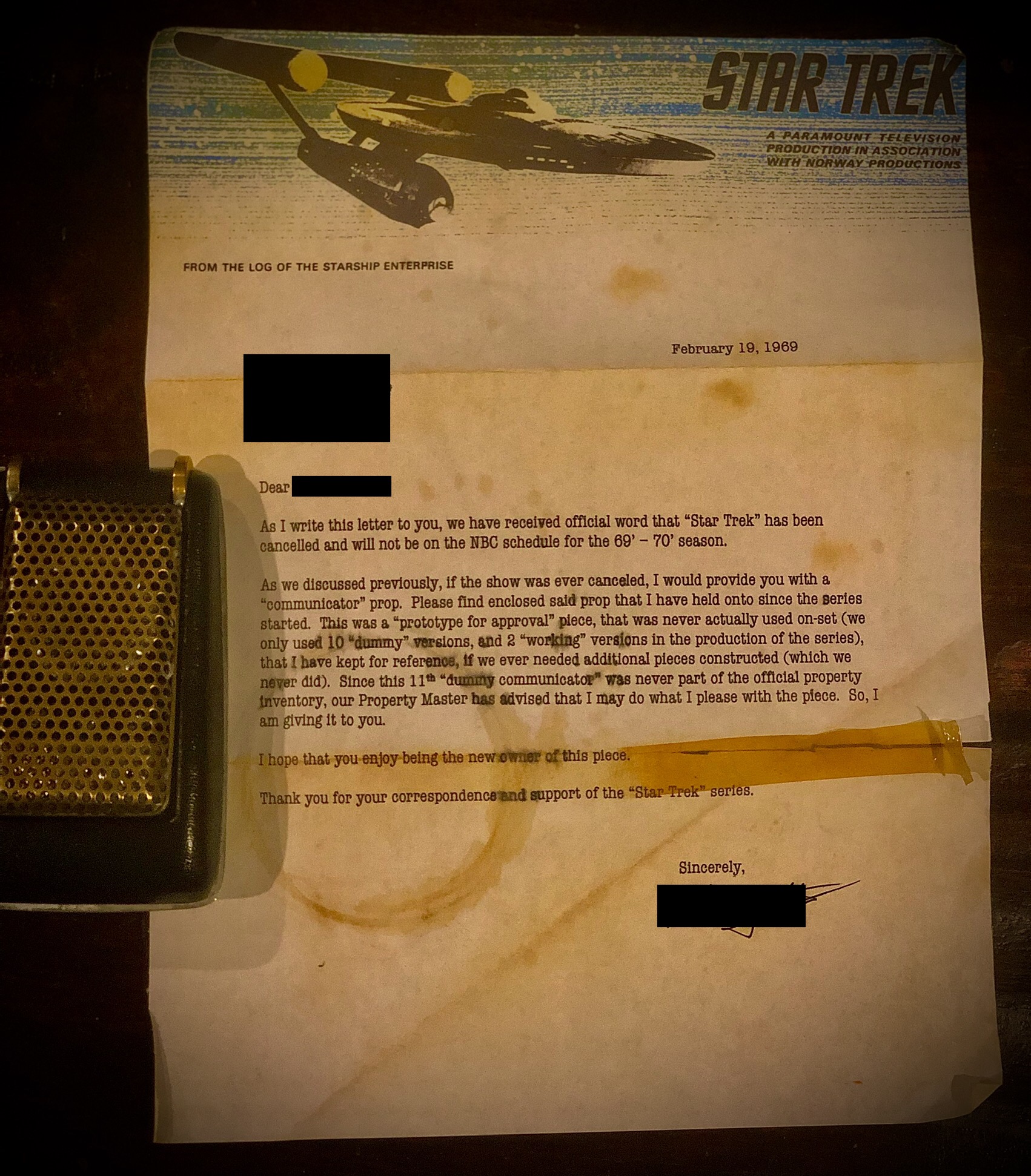 5. The communicator is the most documented ”Landing Party” prop, with a wealth of research from around the web for a forger to use, and kits with lineage to confirmed originals have been produced.

-A forger may use communicator kit shells tied to studio originals (such as DStines or Jlong kit shells) to cast bucks and form their own vacuform Kydex shells with ”vintage“ hair cell patterns. Herocomm has done a thorough job of documenting what vintage Kydex looked like compared to modern Kydex and some builders have located the vintage Kydex, as I result of this research. I personally have a piece of Kydex that, if I recall correctly, was cut from a vintage suitcase.​
-The forger may purchase vintage Aurora T-Jet hubs from EBay. Modern reproductions are easy to spot.​
-The forger may hand-cut and file their aluminum parts making sure they look similar but slightly different than known production originals this may be compared to; this is supposed to be a prototype, after all.​
-The forger may purchase a vintage The Science of Moire Patterns book from Ebay, or elsewhere, and use a moire pattern that was never seen on any other comm in the series for their comm.​
-They can purchase a vintage radio grille that matches Herocomm’s specs.​
-The forger can avoid that whole pesky “modern Velcro vs. vintage Velcro“ issue by not putting any Velcro on their prop. Since the story is that it was never screen-used, this will be easily explained away.​
-The forger may use reference material to form their own brass antenna lid, making sure not to use a lid created by any known maker or kit. Any variances from known original props are easily explained by this being a “preliminary model”.​
-They may use adhesives that have been identified and chronicled to assemble their comm.​
-Lightly weathering and aging the overall prop is easy to do. (Over-weathering is a typical giveaway of a forgery. Most screen-used TOS communicators are in pretty good overall shape for their age).​
​
6. “Layering” the provenance of the piece, to ensure that it is not tied to the forger as the maker, and has explainable “breaks” in the chain of ownership, is not difficult, given how much time has passed since the Original Series wrapped. This is where the “current owner”—who absolutely cannot be a known maker, or tied to the forger in any way—presents the item with a tale of the the prop and letter of provenance being found in a cigar box in the basement of a “long-dead uncle“ who acquired it from a yard sale, in the 1970’s, at an unknown location from an unknown owner (or something similar). The more ”layered” the chain of ownership, and the more deceased hands it is claimed to have passed through, the more likely the provenance may be accepted.

For these reasons, I will be very shocked if we don’t see the fabled “11th Dummy Communicator“ appear, within the next few years.
Last edited: Aug 4, 2021

RPF PREMIUM MEMBER
I have some of that Stationary!

RPF PREMIUM MEMBER
If they do a better job on the comm than the phaser we might not be able to shoot that one down so easily.
Also, if a forger used the Wah Chang claim on the comm it would make more sense. But now if someone uses that story…….

It's not an unreasonable fear, but fortunately, most frauds that are discovered tend to be obvious. The ones that aren't, the really good ones, are the problem. As good as a job you have done with the letterhead, there are several obvious tells in the text that make it clear that it was not done with a period typewriter as referenced by John Dwyer. Unfortunately, it IS good enough for most people, especially someone with a need to believe.

An issue for me is risk vs. reward. Attempting to pass a fake as real, if presented carefully, doesn't have much of a downside. Worst case, the owner can say "Hey, I told you I didn't know anything about it! I guess Uncle Eddie was fooled as well!" That makes it all the more likely that an 11 will one day show up, if not several. There is no real way to address this issue, either.

ALLEY said:
I believe that John Dwyer even identified a specific model of typewriter that the studio purchased en masse, in an interview, whose packaging material was used as “wall greeblies” on the TOS sets.
Click to expand...

The IBM Selectric I, for the curious.

RPF PREMIUM MEMBER
Some interesting segments, that relate to this topic:

RPF PREMIUM MEMBER
"They [the auction house] want it to be right. Because if it aint right, they aint going to earn a dime."

That's my favorite quote, and the problem with HA.

Disney Store Raiders Idol anyone get in on it?
3 4 5