Who Was In This Hunt?

Found this pic of the 501st boards, but there are some cool Preds, just wondering who they were 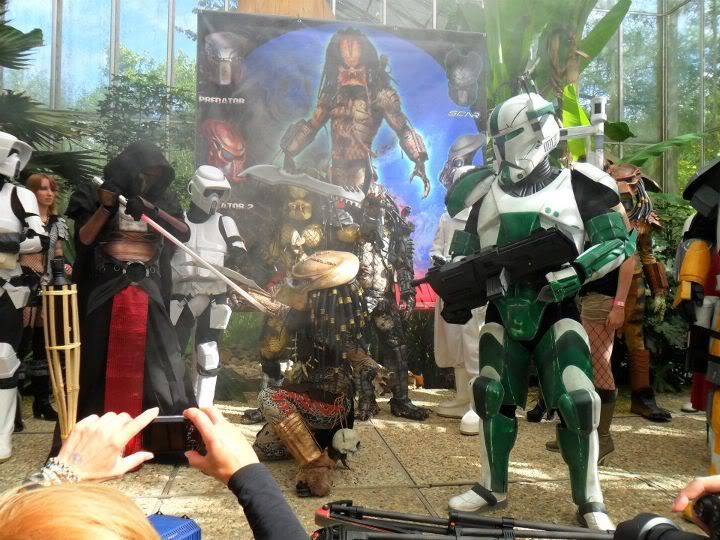 That's the Predator Clan Deutschland.... there's a few members who are members here too

It does look that way, unfortunately all those Star Wars guys are in the way

This is a pic of the Elf Fantasy Fair 2011 in Arcen, where the Predator Clan Deutschland and the 501st where some kind of walking act.
Now the Clan discharged from the old team chef Celtic Skull Hunter regarding to his misdemeanor on us.

We changed the Clan name to Predator Clan Germany to make it more "international".

In the middle is Naxa kneeling before the Sith. Behind is Drakan with a Grusderk costume (great thing) and Hellspawn.
And yes, Naxa reformed the Berserker Adult Costume!

Not quite true, the name PREDATOR CLAN DEUTSCHLAND exists
further.
With the ex clan members, I distance myself because you have character assassination run against me.
PREDATOR CLAN GERMANY continues with its new members
on events for the fans
The images were made &#8203;&#8203;by me I have more that I can post.

Crazy Hunter said:
... I distance myself because you have character assassination run against me.
PREDATOR CLAN GERMANY continues with its new members
...
Click to expand...

Yes, sure..... you make me laugh buddy.... All I said and wrote is true... and I have more witnesses as you can count!
And also true is that all old clan members take distance from you and created the PCG.

I really hope you don't make the same mistakes in your new Clan.

But we shouldn't spam this nice forum with this little conflict.