propmaster2000 said:
One thing I did for my Extruder on my CR-10S (since the spool holder is mounted on the controller box) is to
add a "small metal jacket" to the input hole where the filament goes in.
.
To keep the filament from wearing down the plastic entrance hole, I put a 1/8" rivet jacket (with the center rivet part removed)
in the hole. This gave the filament something to rub against during a print and not wear out the hole and easily replaced if needed.
I mostly use PLA which is fairly smooth, but friction will happen.
Click to expand...

I should have thought of that, but good to know as I might just get another one in the near future.

Back when I got my first printer I also thought it would be nice to be able to "check at a glance" how the Extruder drive gear
was functioning. This included seeing when and how well the ''retraction and drive speed'' were effecting the ''filament to table
operation''.
.
So as a quick reference (at the time) I used one of the small black zip ties they gave with the printer and a small piece of the Blue tape
(as a flag) attached to the zip tie and "zipped" to the top portion of the stepper drive shaft.
I know I can print a small added piece that can be pressed on top, but I kind of like the quick, effective and cheap way.
All my printers have there own little flag as a guide.
Of course, user preference.
. 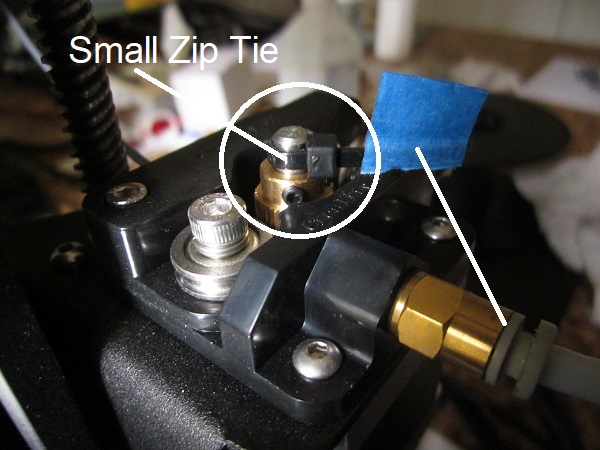 LOL, I did the blue painters tape too. Too funny.

collinlueb
Just as another "user" observation to share.
Since you have decided the Ender 3 will be your printer, here is another thing about E3 printer I have found
to be useful that the E3 does.
Since I print very often on my E3's, I use the same SD card on each of the individual printers over and over.
The SD card not only carries the current print, but also stores many previous prints as well for future prints.
.
When ever I add a new project to the same SD, I sometimes run the risk of that newest gcode developing an error (getting corrupt).
My first indicator that a print project is at risk, is that at some point during the print it simply stops the printing process
and the print head just sits there or it has at times moved to the left side and stops and it doesn't appear however to have been
a power glitch. It just stops where it is, at temp. and at the last gcode setting.
.
The good thing however is it is still at temp. and the "Z" axis has not moved down at all by itself or with help, so the machine
thinks it is right where it had stopped.
Since there is no actual "feedback" indicators from the steppers indicating its current location (at the time the print stopped), it will
simply start from where it stopped to the best of its ability.
.
If you catch it in time (as soon as it happens), it may still be able to begin again!
If the user moves the gantry in any way, the machine does not know this and thinks it is in the same place it was when it stopped
and will resume using the code it was at when it had the brain fart.
.
The E3 can restart the print at the last setting and continue where is last was IF the "Z" axis has not turned at all!
If a power failure occurs and when the power comes back on, the printer will ask if you want to continue and you simply choose
yes.
If the print just stops not due to a power failure, you can treat the glitch as a power failure by switching it off and back on, then choose yes
at that point.
.
The only issue however is, if it is a small'ish print, that very first layer after the print resumes at that point, the adhesion may not be good.
It's possible you may have to add glue to the "new" joint when the print finishes.
Happy printing
Do you have any progress print pictures to share?
Last edited: Aug 5, 2019

Here’s what I use to address the vibrations and movements that could cause little errors in the printing. Cost me $3 from the FiveBelow store. It’s just a square eva floor piece. 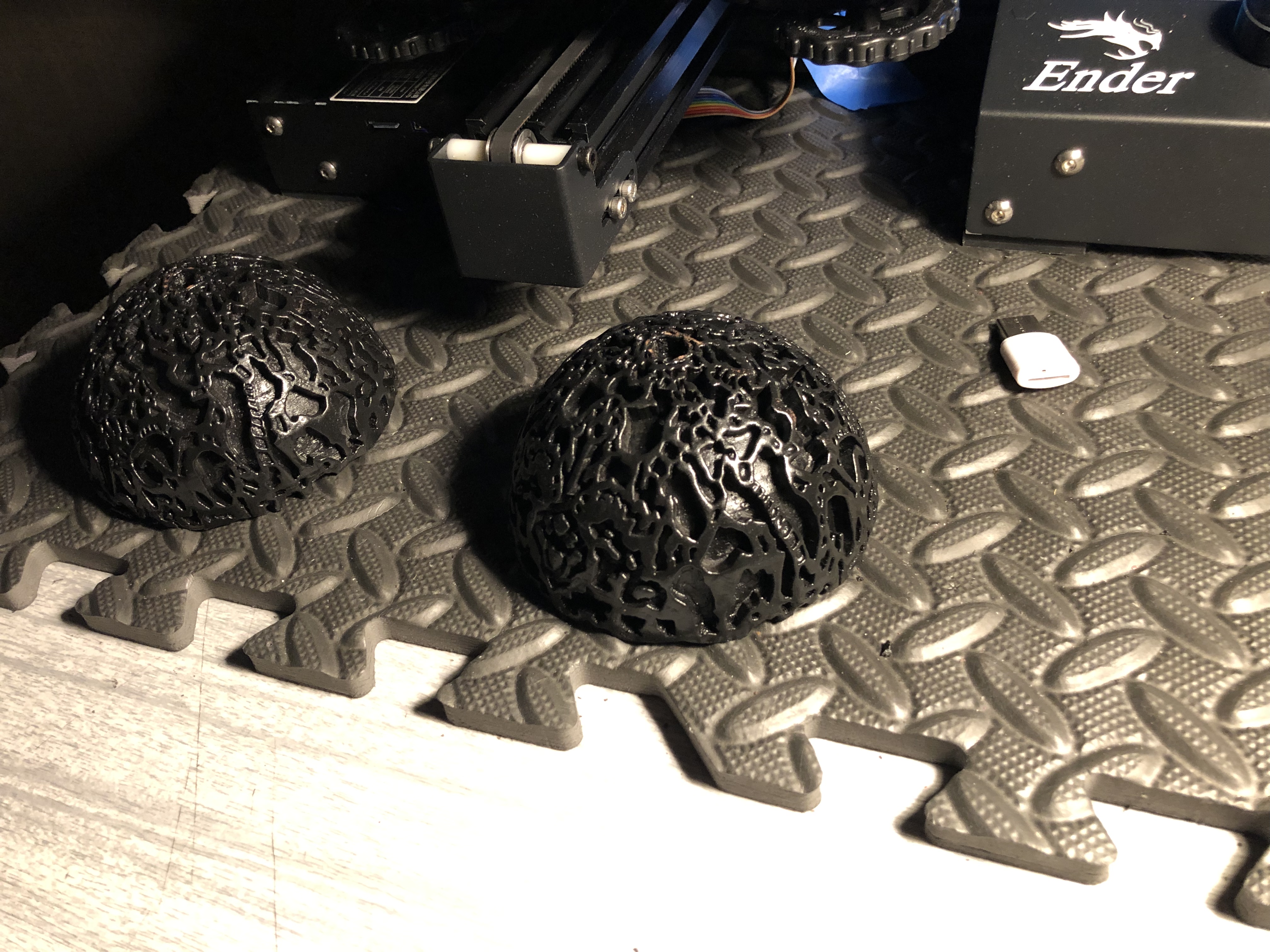 I have heard great things about the Ender-3 because of its high quality, low price and large build plate.
Personally I have a QIDI Tech One... It is much smaller but has a duel extruder and an enclosure. I wanted to be able to print ABS and a higher temperature is needed for that. It's my first printer and I have had a great experience with it so far.

Do you have any pictures you can post of recent prints you've completed using the QIDI Tech One ?
Does the Dual Extruder of this printer mean it has 2 separate nozzles side by side and 2 separate Extruder stepper motors
each with it's own color filament pushing the filament to the nozzles individually?
Inquisitive minds....yada, yada, yada.
Thanks for posting
Last edited: Aug 9, 2019

Sorry if I'm butting in on this thread, but I was wondering if anybody here has tried the Anycubic Photon, or the Phrozen Shuffle or perhaps the Elegoo Mars resin printers?

I'm waiting to see how the Phrozen Transform does.
E

collinlueb said:
Hello i don't know if this is the right section but this is my best guess. I was wondering whats a good 3d printer for making general props and stuff. I wanna learn 3d modeling soon and being able to print the stuff I model would be really nice. I was wondering whats a good 3d printer for doing regular sized prints. I was thinking the Prusa i3 mk3 but that's a little expensive. Any recommendations of printer, filament, slicer program, or really and tips would be helpful. I have had one 3d printer before, the mono-price select mini but it was a little small and it broke recently ( I dont think it was my fault.)
Click to expand...

I will recommend reading this article. It was very helpful to me.


Good luck with your choice!

After looking over the www and seeing the recommendations and rating...
I purchased the Prusa i3 Mk3 as a kit about a year ago with zero experience in 3D printing. I have had nothing but success with the printer, the support has been great, and Amazon sells the filaments 'on sale' quite often. The hardest thing for me was learning CAD. I use FreeCAD FYI.

Has anyone been seeing/getting a tons of links/trending links/news about the Elegoo SLA printer based printer?

Too Much Garlic said:
Sorry if I'm butting in on this thread, but I was wondering if anybody here has tried the Anycubic Photon, or the Phrozen Shuffle or perhaps the Elegoo Mars resin printers?
Click to expand...

DOH!.. beat me too it.. I missed this post.. and it was only a few posts above! yikes! LOL

kalkamel said:
Anyone have any experience with the Anycubic i3 Mega or the Anycubic Mega S?
Click to expand...

xl97 said:
Has anyone been seeing/getting a tons of links/trending links/news about the Elegoo SLA printer based printer?

I picked up the Anycubic Photon S last week - very similar to the Elegoo offering.
Extremely happy with the results so far. I am yet to have a failure and the prints are stuning.
Here some parts I made for my 1/2 studio scale Narcissus:

All the parts are done with the included translucent green resin. The engine bay is straight off the printer, and the other parts had a light coat of primer. No parts had any cleanup apart from removing the supports!

xl97 said:
Has anyone been seeing/getting a tons of links/trending links/news about the Elegoo SLA printer based printer?

I bought the Elegoo Mars at the begining of August when it was on special for $250 and printed quite a few things using Elegoo brand resin (grey and black).

The build quality, print quality and ease of use is amazing. I've only had to level the print bed once when I unboxed it. It pretty much is plug and play.

Though the machine isn't without its problems. I haven't checked if there is a firmware update but once in a while I have to restart it or it will bring the build plate down and say its starting the print but not do anything. And included USB drive corrupted on me which resulted in a few failed prints but once I got a new drive everything has been going smoothly.

But the prints though... Wow. Every time I take something off the machine I'm blown away. Cleanup of the models is pretty painless, just removing the supports and sanding away what is leftover. Sometimes I'll have to do a tiny bit of sanding to remove layer lines or voxels depending on the layer height and orientation of the print. I'll include a few pictures of things I've printed (everything but the NetWatch badge are files downloaded from either Thingiverse or MyMiniFactory).

Also here is a comparison with other printers. The Hand of the King pins are printed on the Mars (left) and the Prusa i3 Mk2.5s (right) and both were printed at 0.05mm layer heights. The rook on the right is the sample file included with the Mars and the one of the left is a sample I was sent from Formlabs for the Form 2 I believe (though I think I got a bad sample. It doesn't seem like the quality I'd expect from them).

Hopefully this helps. I feel like all of the cheap msla printers that are on the market now are basically identical (I think most of them even use the same mainboard) so really it comes down to choosing which has a good community for support and which has a price you want to pay lol.

How is it working with the resin? Is it easy to clean the build plate and the vat? I've seen a few videos on Youtube where they really have to pry the item off the plate and it damages the area of the print where they had to pry it off. Do you have that problem often or have you found a way to escape it? Also, what do you clean the prints in - I've heard you can use Mr Clean or such kinds of degreasers instead of Isopropyl Alcohol and I've seen people use ultrasonic machines to dump the prints into.