What Sword is this called

Hey everyone when I was little a watched a Japanese movie called Shoguns Ninja (us release name) it was used by the main character it has a gold wolf desgin on the handle and recently I saw a movie called ninja in the dragons den and i saw it again and the character who played the ninja with that sword was the same main protagonist in shotguns ninja. His last name is Sanada pretty famous actor. He was in the movie old boy.

Here are some pics of the sword. 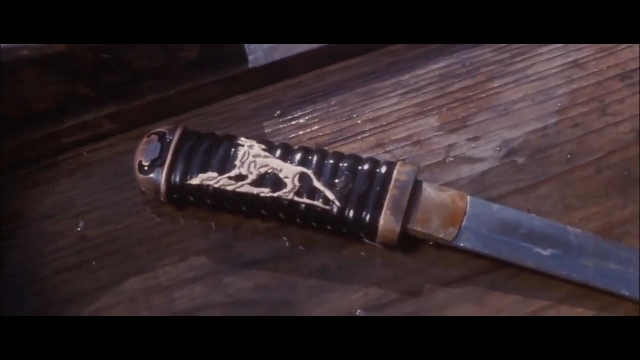 Hello, Japanese 'samurai' sword types are based on length- Tanto (dagger), wakizashi (short sword) Katana (long sword) Tachi (usually a cavalry with a longer curved blade) and Odachi (long 2 handed sword). I would say the one shown is a wakizashi- but of a very unique design with out the tsuba (hand guard) and there is usually a makers inscription on the tang- usually 2 - 7 charachters of kanjii telling who made the sword.

RPF PREMIUM MEMBER
I would agree that based upon the length it would probably be categorized as a wakizashi. That style of mounting without a tsuba is known as "aikuchi," so it would be an "aikuchi wakizashi." Aikuchi mountings were primarily seen on tanto, but they were also sometimes used on wakizashi, and rarely on katanas. As for the wolf on the tsuka (grip), as well as whatever that is on the tang, that is rather atypical for Japanese swords, and may have been added by the prop department for the film.

F
What sword is this?