What movies/shows did you love as a kid but as an adult are now quite...bad?

RPF PREMIUM MEMBER
Oh, this one should bring back some nostalgic memories of yesteryear!
Example: I loved Buck Rogers in the 23rd Century in the late 70's. I couldn't wait for next weeks episode! Today...wow, it's just painful to watch it's so bad! Fortunately, the original Battlestar Galactica is still pallatible!
I just watched The Running Man tonight after many years. I used to think this movie was "awesome", but now, I was so embarrassed I had to turn it off midway through!

You get the point.
So confess, you kids from the past, what kills you to watch today but as a memory in your childhood was solid gold?!

RPF PREMIUM MEMBER
Battle beyond the stars... Got it on blu ray and still haven't made it through. I watched it all the time as a kid, but now it's unwatchable.

Come on, The Running Man is still great! I absolutely loved the Adam West Batman when I was a kid, but even that's hard to watch today. Lol.

RPF PREMIUM MEMBER
Starship troopers, I loved that movie, watched it again last week for the first time in years and it was terrible

I'm making it a point of not rewatching old stuff I really like now. I seem to ruin them every time.

RPF PREMIUM MEMBER
Masters of The Universe. I was so excited when it popped up on Netflix but then after watching it, it was hardly watchable

I think a lot of the old cartoons from the 80s that folks my age grew up with are probably fairly unwatchable by adult eyes. But that's mostly because (A) the animation is awful, and (B) the storylines are just...dumb. But, really, that's to be expected. Those shows were never good "family" entertainment. They were kids shows. I wouldn't expect, like, Zoobilee Zoo or the Great Space Coaster to be appealing to an adult, either. Or, for that matter, Sesame Street. Like, for a youtube clip? Ok, sure, maybe. But to sit down and watch on the regular for half an hour? No way.

I think The Running Man works on the same level as Starship Troopers, if you view it as ultimately satirical. But yeah, the Running Man and Total Recall are kind of the height of Arnold's action career when he'd mug for the camera and spout one punny liners, so it's sort of its own animal, and very much "of an era."

Funky Jedi said:
Oh, this one should bring back some nostalgic memories of yesteryear!
Example: I loved Buck Rogers in the 23rd Century in the late 70's. I couldn't wait for next weeks episode! Today...wow, it's just painful to watch it's so bad!
Click to expand... 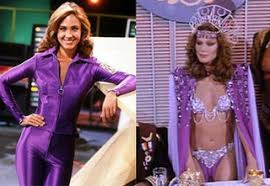 What's not to love


I used to love the A team as a kid, but doesn't really hold up to repeat viewings today
Last edited: Mar 1, 2016

I know that as a kid I watched Super Mario Bros. and the Jean Claude Van Damme Street Fighter film multiple times. I liked them both then. While I have revisited Street Fighter as almost a RiffTrax like experience while drinking with friends before, I have not revisited Super Mario Bros. at all. Pretty sure it would just make me angry and depressed.

Quark - the tv series isn't quite as hilarious as I thought in 1977.

MegaForce. I think I drove my brother insane watching that over and over...
B

Agree with Solo - I would vote the 1980s toy-selling cartoons as the most disappointing to revisit. Maybe that's because they seemed SO cool as a kid and now the bad quality is much more off-putting. The writing just strings together action scenes without much sense and the animation looks too cheap for a 30-second TV commercial today.

Plenty of other TV/movies from that era look bad today too. But it seems like the live-action stuff was easier to see for what it was at the time. I still love Dukes of Hazzard but I was aware even as a kid that it was goofy. Ghostbusters is still fun today but they seem like a bunch of immature reckless guys instead of heroes. The cartoon show made them closer to legit heroes.

Seeing Knight Rider episodes for the first time in years was a jolt. I remember taking it 100% seriously as a kid. Now it has aged pretty well for the era but it's not what it used to be.


This is what big-budget remakes are supposed to be doing for us. Taking these badly-aged shows with fun concepts and redoing them better. It seems like almost any of these shows could be made into something decent if decent effort was thrown at them.

It mystifies me why the studios don't demand more quality from the over-done & over-marketed remakes. In most cases the public's expectations are really not that high for the remakes. But the studios hire producers & directors who can't even be bothered to try to make the same friggin' show it was before. (This rant applies to more than just Feigbusters.)
Last edited: Mar 1, 2016

70s invasion of the body snatches is not as good as I remembered it to be.

I still like the old night rider, but I do wonder how I never noticed so much of the shots used models when I was a teenager.

Victor3 said:
MegaForce. I think I drove my brother insane watching that over and over...
Click to expand...

Really? OMG that was awful even back then. I actually paid money to see that in a theater when it came out--bad mistake!

NeoRutty said:
Battle beyond the stars... Got it on blu ray and still haven't made it through. I watched it all the time as a kid, but now it's unwatchable.
Click to expand...

I'm actually the exact opposite on this. When I was a kid I thought it was terrible, but These days I actually enjoy it. I guess appreciate more now what they were able to do with such a limited budget. I find it fun a little movie (with a truly awsome score.) Now Buck Rogers......I bought the DVD years ago and yet have been able to make through an entire episode.

I Loved Voyagers! as a kid. Can't watch a full episode now.

The Superman movies with Christopher Reeve.
Too campy for me now.

NeoRutty said:
Battle beyond the stars... Got it on blu ray and still haven't made it through. I watched it all the time as a kid, but now it's unwatchable.
Click to expand...

I actually still love it... it's kitsch for me

RPF PREMIUM MEMBER
The show I really can't sit through now is Duke of Hazzard... I used to *love* that show as a kid... had the hot wheels cars set, the Bo and Luke action figures and General Lee... you get the idea... for the life of me I cannot sit through an entire episode of it now...

The other show I used to love and can still sort of watch, but only in small doses at a time is Airwolf

The honorable mention movie wise for me is The Last Starfighter... the movie itself is actually still ok, it's how dated the CGI effects are that is unwatchable. If there was ever a movie that actually needed a "Special Edition" face-lift, it's Starfighter...

A lot of the "vehicle" driven (er...no pun intended) shows of the late 70s and early to mid 80s are tough to watch nowadays. Mostly because they relied on things like recycled footage, low budget model work, and were essentially just random "mission of the week" stories, rather than ongoing arcs. This can make long-term watching difficult because, who cares what happens next? You know the hero and their supercar/superhelicopter/supermotorcycle is going to solve the problem in 1-2 episodes, and repeat the process the next week. Nobody's attitudes will change over time, either. They'll just be the same characters as always. Nothing that happens in the episode will really matter long-term one way or the other.

So, really, the only reason to watch is to see kickass shots of the vehicle doing kickass things...which kinda doesn't work when the vehicle is actually just a model, or you've seen it execute that same maneuver in that EXACT same footage some 300 previous times.


Like, even as a kid, I KNEW they kept recycling the shot of the Dukes successfully jumping that bridge, followed by the cop car trying and crashing. In my memory, the scene appeared in damn near every episode, and I knew it even then.