Interest Westworld - The Man in Black - Coat and Waistcoat Fabrics

I know a few people have expressed interest in a run of screen accurate fabric for the Man in Black. Myself (UK based) and associate (US based) are organising a run of the frock coat fabric with the original weavers who rewove the vintage fabric for use in the show. After a lot of searching we also recently managed to track down the exact waistcoat fabric, I’ve lined up the stripe pattern with some high resolution promo pictures and it matches exactly, it seems it was overdyed charcoal for the show. According to the supplier there is only a finite amount of this fabric left and it’s not being restocked so the opportunity to obtain this fabric might not come again. I've included a picture of both of these fabrics as they appear in their natural state, before they were darkened by the costume team.

Assuming we can get enough people to get the run started the coat fabric will be in the ballpark region of $110/yard, the waistcoat fabric will probably be marginally more. Note that the exact figure on these fabrics depends on the number of sign ups, it might be more or less. The coat fabric is approximately 54 inches wide so 3.5 yards should be a safe amount for most sizes, the waistcoat would only need one yard. If you are a particularly large size it may require a greater length though.

I’ve rewatched the first two seasons on 4K disc and have plenty of observations about the minutia of the costume which I’ll be happy to share with everyone to help people achieve fidelity in their outfits.

We are also working on recreating or tracking down matches to the other details in his outfit such as the neckwear fabric, waistcoat buttons, etc though these are still in development. The neckwear fabric will be printed cotton (as Ed Harris’ appears to be) so won’t be hugely expensive, fortunately the other fabrics used for the pieces like the trousers and shirt are plainer and more generic.

Assuming we can get a handful of people together to start the run, payment would involve a 50% deposit before the order is placed with the weavers, the rest would be payable when the fabric is in hand to ship out. Please post here if you’re interested in these fabrics and hopefully we can get this run going. I also posted about this on my Instagram and have received some interest on there, though the content on that account is mostly aimed at Doctor Who fans so I'm hoping to reach a broader audience on here. 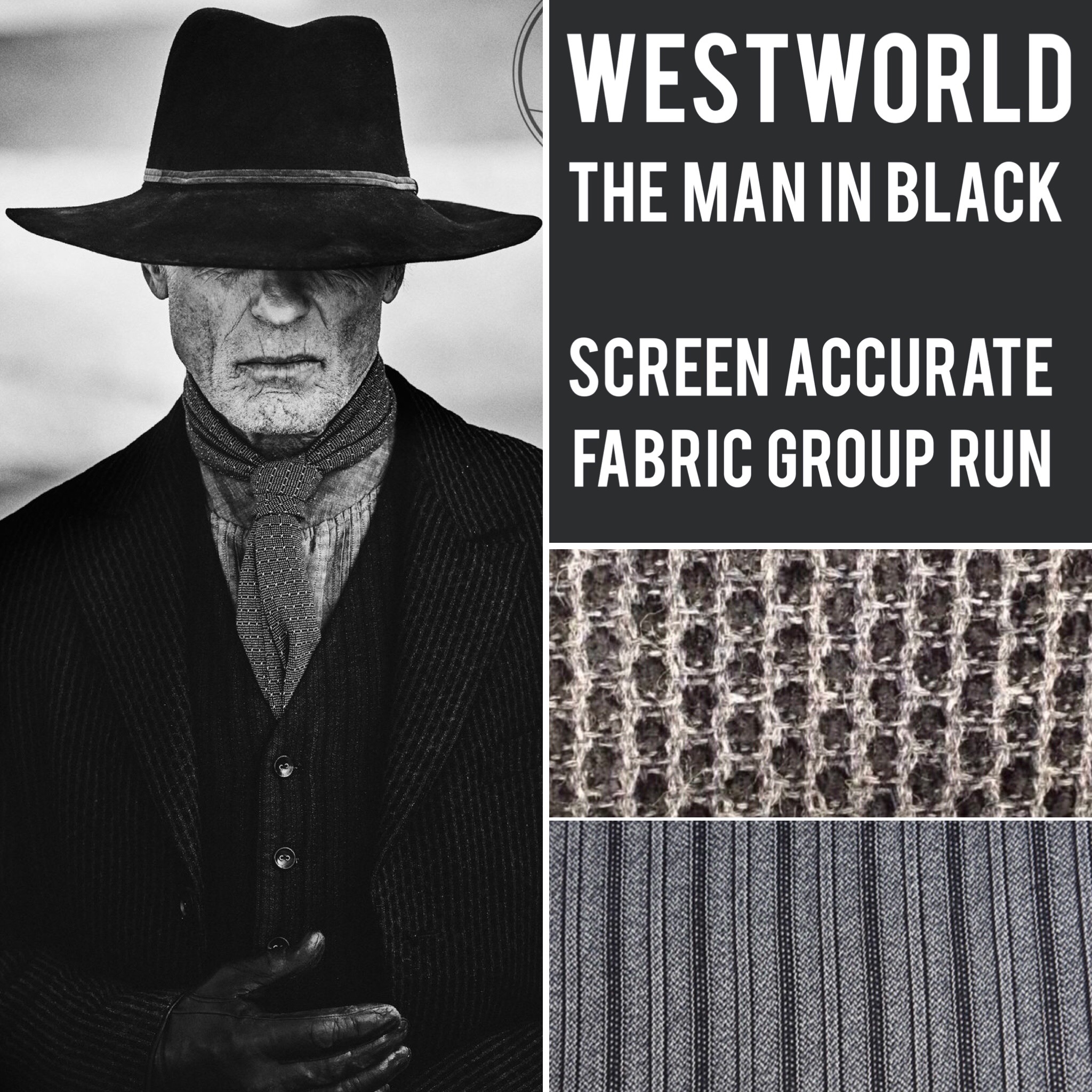 Updating this thread. We’ve received interest from around eight or so other people through other places, some I’m already aquatinted with. A number of them seem eager, others though are a little more cautious, realistically less than half will probably actually sign on. I’m going to put the current realistic number of sign ups as four (the two run founders and two others who’ve expressed interest). If a total of six or seven people sign up then that’d be enough to put the run into production, though higher numbers will probably reduce the price per person somewhat.

Anyone who’s interested please let me know and hopefully we can get the numbers to get this run going.

Cool, could you please send me a private message with your email address so that I can better keep in touch. It’s slow progress at the moment but hopefully the numbers can be reached.

As an update I’ve managed to sort out the waistcoat buttons. Unfortunately no off-the-shelf example was an exact match so I had to make some to get them perfect (mine are in the lower right), the eyelets were imported given how rare such tiny ones are. I can offer these to people too, as I have to make them there’s a bit of time that goes into it but the cost won’t be particularly high, maybe around £2 or so per button. 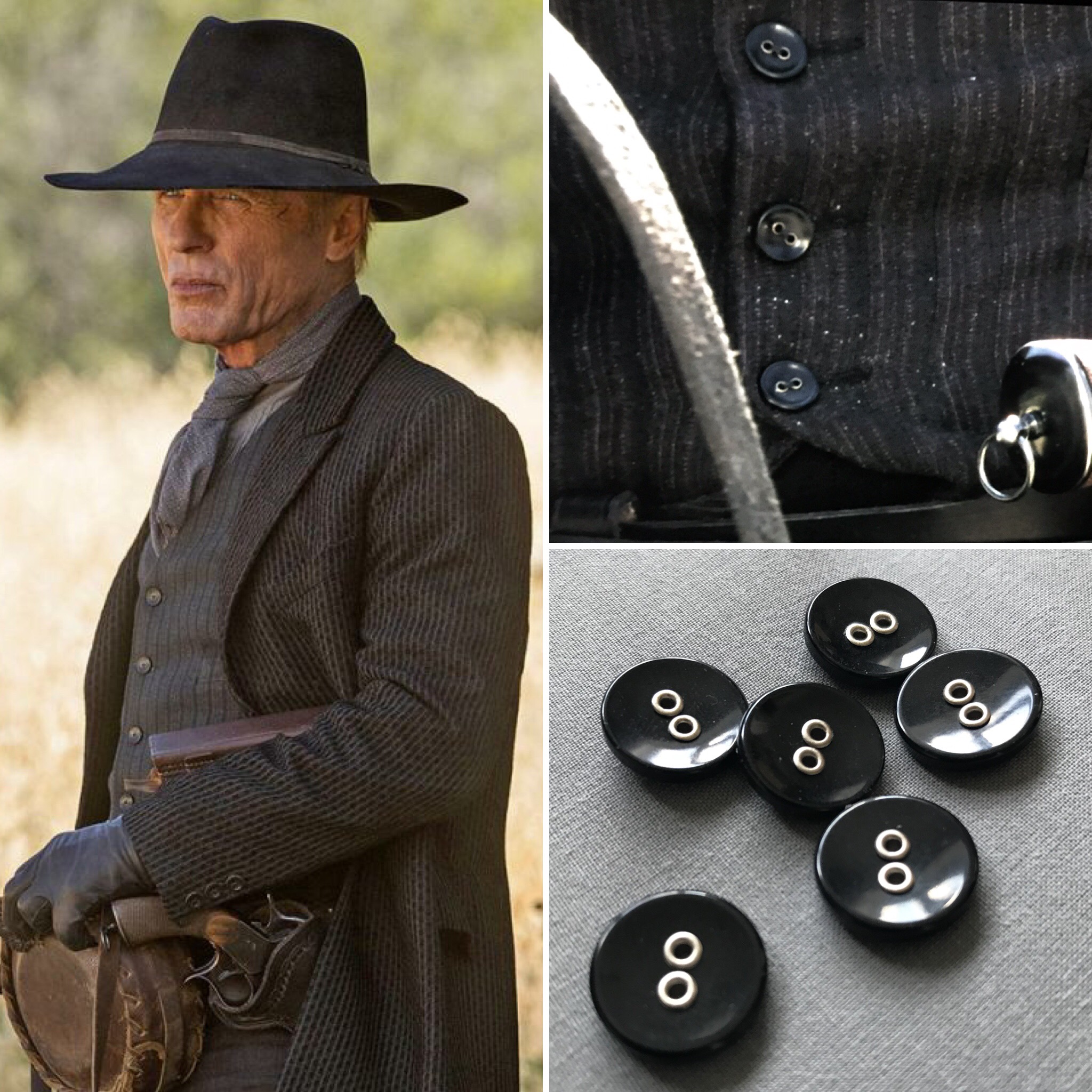 I'm in, been dying to get a run of this fabric. Since the vest is an option too, that's a hell yeah.

RPF PREMIUM MEMBER
My god, been waiting for someone to do this, I'm all in. Thank you so much!!!

I’m glad to see a coupe of new people on the run, for anyone else interested in Westworld stuff please post in this thread and send me a DM.

I’ve got a huge amount of info about the finer details of the outfits which I’ll start posting about soon. In the meantime I’ve found a really good match to Teddy Flood’s jacket fabric (the fabric match is the one in the lower right corner), if anyone wants any of this please let me know. This stuff would be in the ballpark of £35/m, I’ve found some high quality steely blue lining for his jacket too, that would cost more along the lines of £20/m or so.

In addition, I’m currently tracking down really good matches to all the other fabrics in these outfits, I believe I’ve found some good matches to Teddy’s waistcoat buttons, more info on those will come soon. 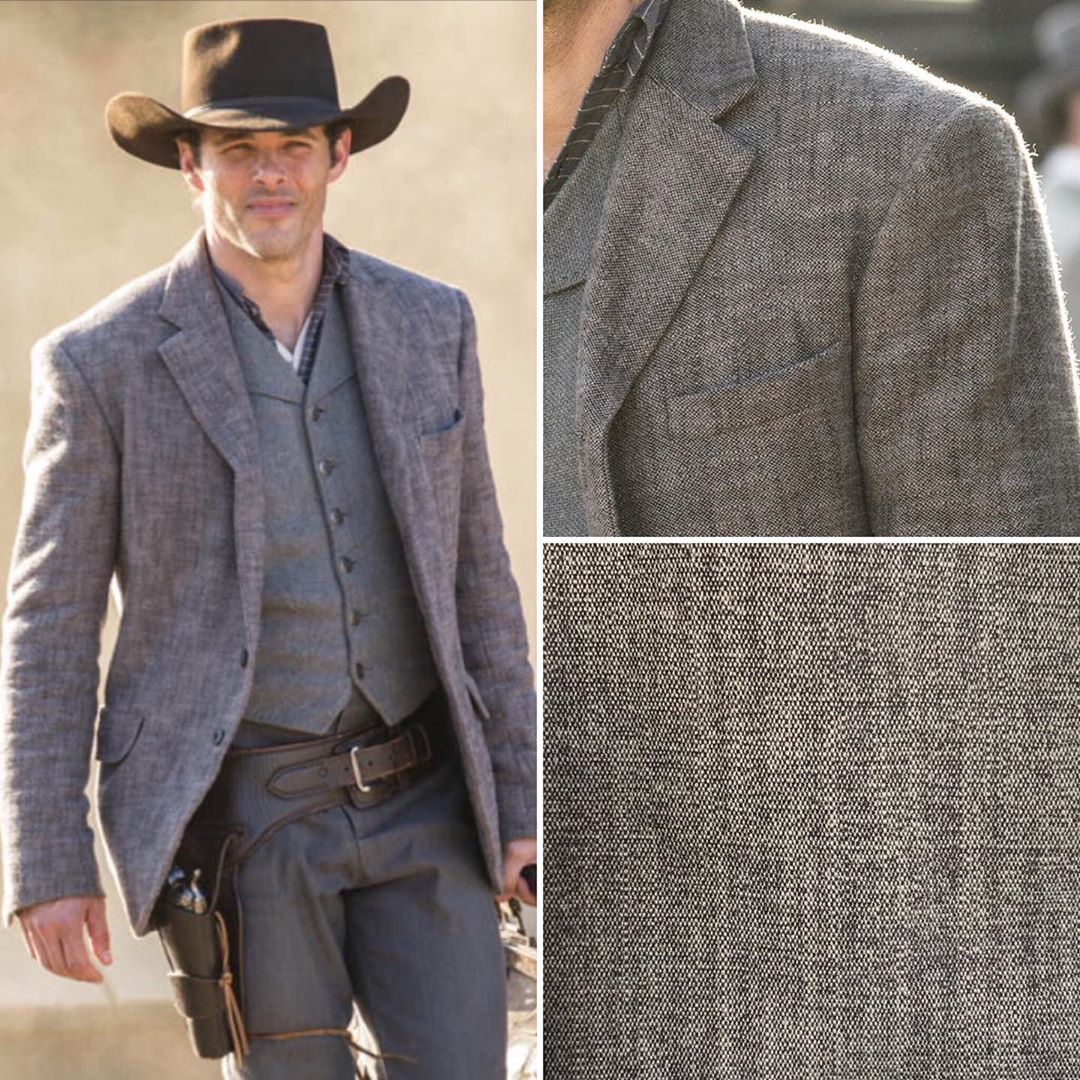 After a lot of searching I’ve found some really great matches to Teddy’s waistcoat buttons. The ones I’ve found are pictured in the lower right, they’re 20mm in diameter so seem to be the same size as Teddy’s, his are a bit larger than typically used on waistcoats. I had to buy a heap of these to meet the supplier’s minimum order requirement so if anyone wants some they’ll be £2 per button. 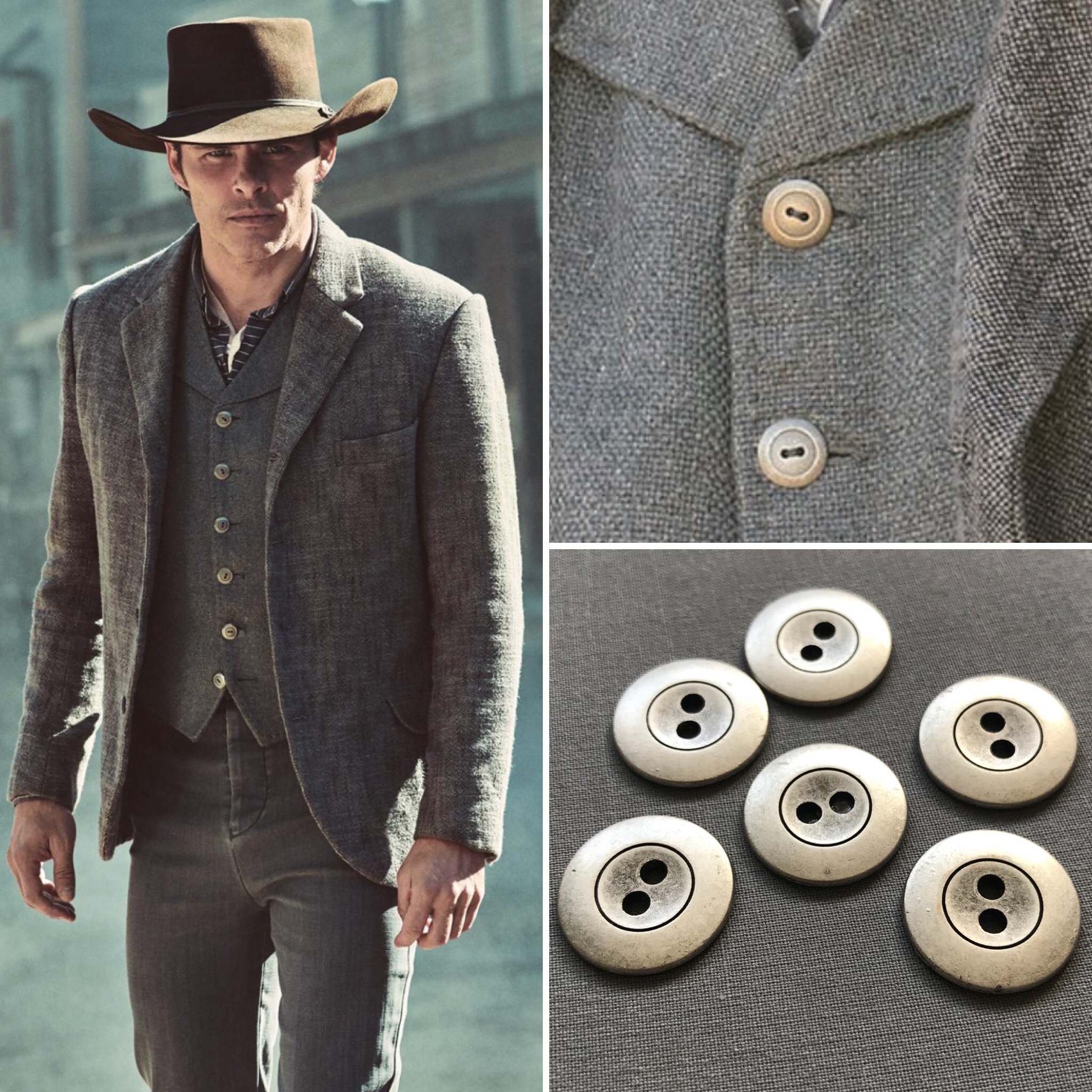 Update: assuming we can get around nine people on board for the coat fabric this run can go ahead basically right away as soon as the numbers are there. For anyone who’s already expressed interest please send me a DM to discuss it further, if anyone new is interested in signing on please put a post here on the thread and I’ll contact you directly to discuss the details.

The target price of $110/yard is still the aim for this run, if we can get nine or more on board then that’s likely what the price will be, if fewer than nine sign up the run might still be doable but the price will likely rise a little.

The neckwear design is being tweaked ready for printing, once perfected that’ll be made available. The waistcoat fabric can be supplied at the same time as the cot fabric. All the other fabrics in this outfit I’ve found excellent matches for if anyone’s interested stuff like the shirt and trousers. I’ll post about all the excellent matches to the smaller aspects of the costume over the next few days.

Update: a few of people that expressed interest on the run through my Instagram page have been unable to commit to the run at this time, there are a couple of others I’m awaiting replies from but as it stands here is the current list of allocated portions of coat fabric:

A bump for the run and a new piece of general info. I posted about this in the main Westworld costume thread page but I’ve found a fabric that’s a really amazing match to the stuff used Teddy’s trousers. From some publicity photos and screen-caps it looks like Teddy’s trousers are made of a grey canvas but with an unusual denim look texture. The lower right photo is the material I’ve found, if anyone wants any of this let me know. I’ll be posting about his waistcoat fabric as part of the next bump. 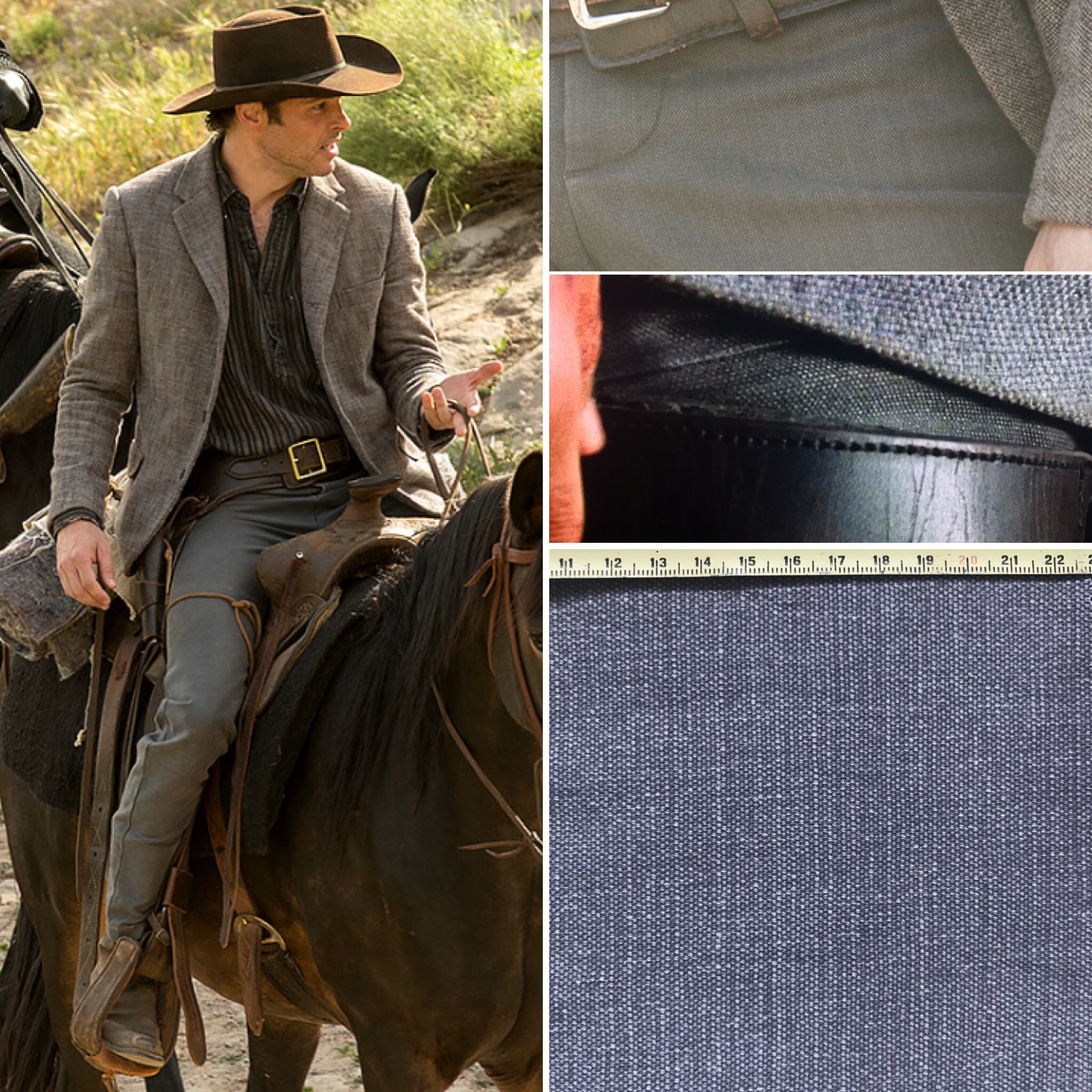 RPF PREMIUM MEMBER
Hope you will make it, fabic looks nice and I love westworld!

Bump and more info. I’m currently talking to someone who might be able to bring this up to six, I’ll post an update here if/when they officially sign on.

In the meantime, I posted some info about Harris’ coat lining in the general Man in Black thread, you can read about it there. Here’s a picture of a lining I found which appears to match the stuff used in the screen worn coat. When the run comes to fruition I can supply all these various other fabrics for anyone who wants them. 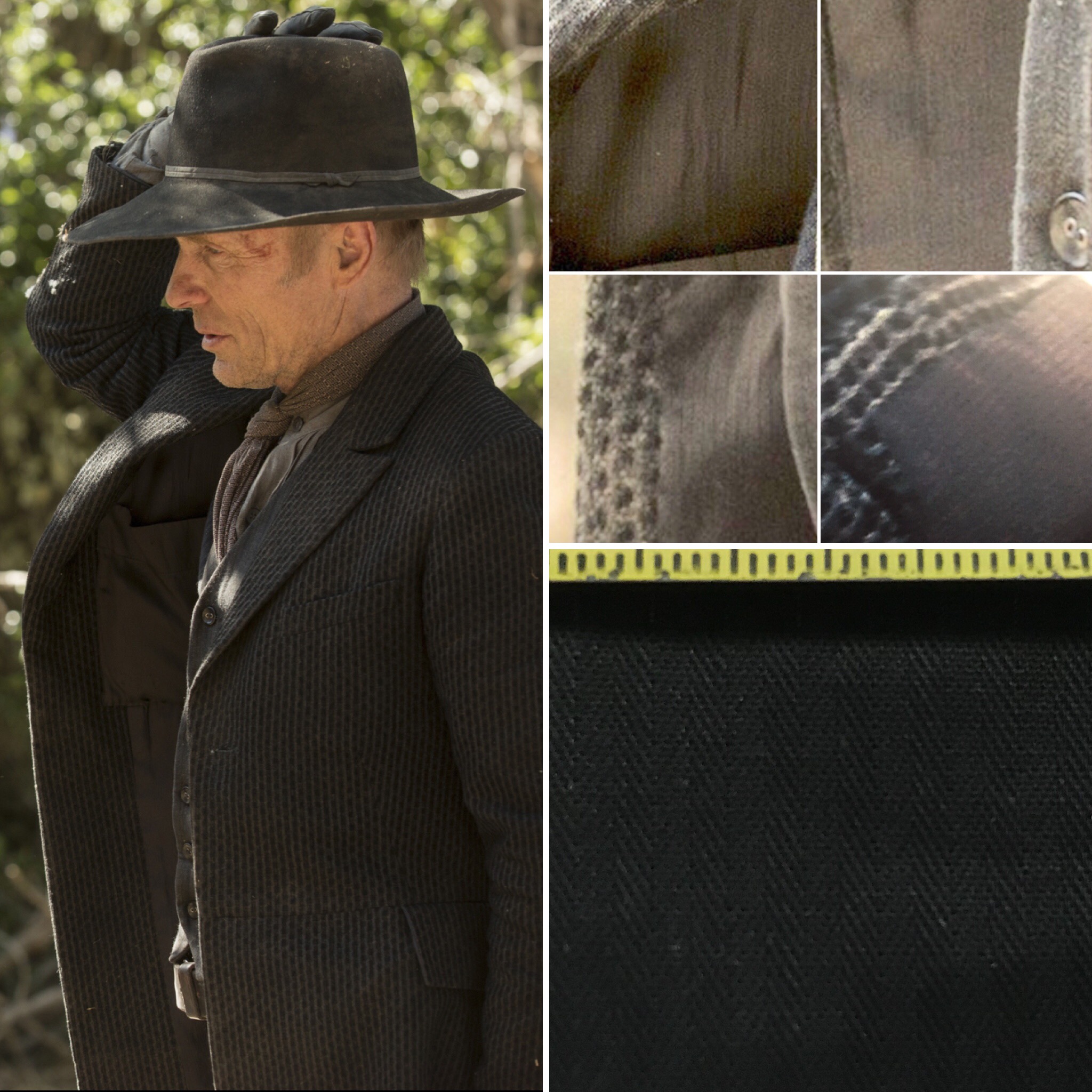 RPF PREMIUM MEMBER
I am interested in the man in black coat and waist coat and scarf, what’s the projected cost and amount of deposit?

Bloodmike1 said:
I am interested in the man in black coat and waist coat and scarf, what’s the projected cost and amount of deposit?
Click to expand...

Excellent, every person helps. I’ve sent you a DM with all the details.

Update: if everyone’s onboard it looks like there might be seven for the run, not quite the nine that was the target but it can go ahead with seven, though probably at a slightly higher price point. Here’s how it currently stands:

If anyone else not listed here wants onboard please let me know ASAP. Tomorrow I’ll do one final call for people through my Instagram in a final attempt to get the numbers up. I’ll probably start contacting people on the list either this weekend or at some point next week to get the specifics down and payments sorted.

Also, I posted this in the general Man in Black costume thread but I found some very accurate coat buttons too for anyone who wants them. Though the priority at the moment is to sort out the coat and waistcoat fabrics, the miscellaneous fabrics and accessories can be dealt with once the run is 100% confirmed. 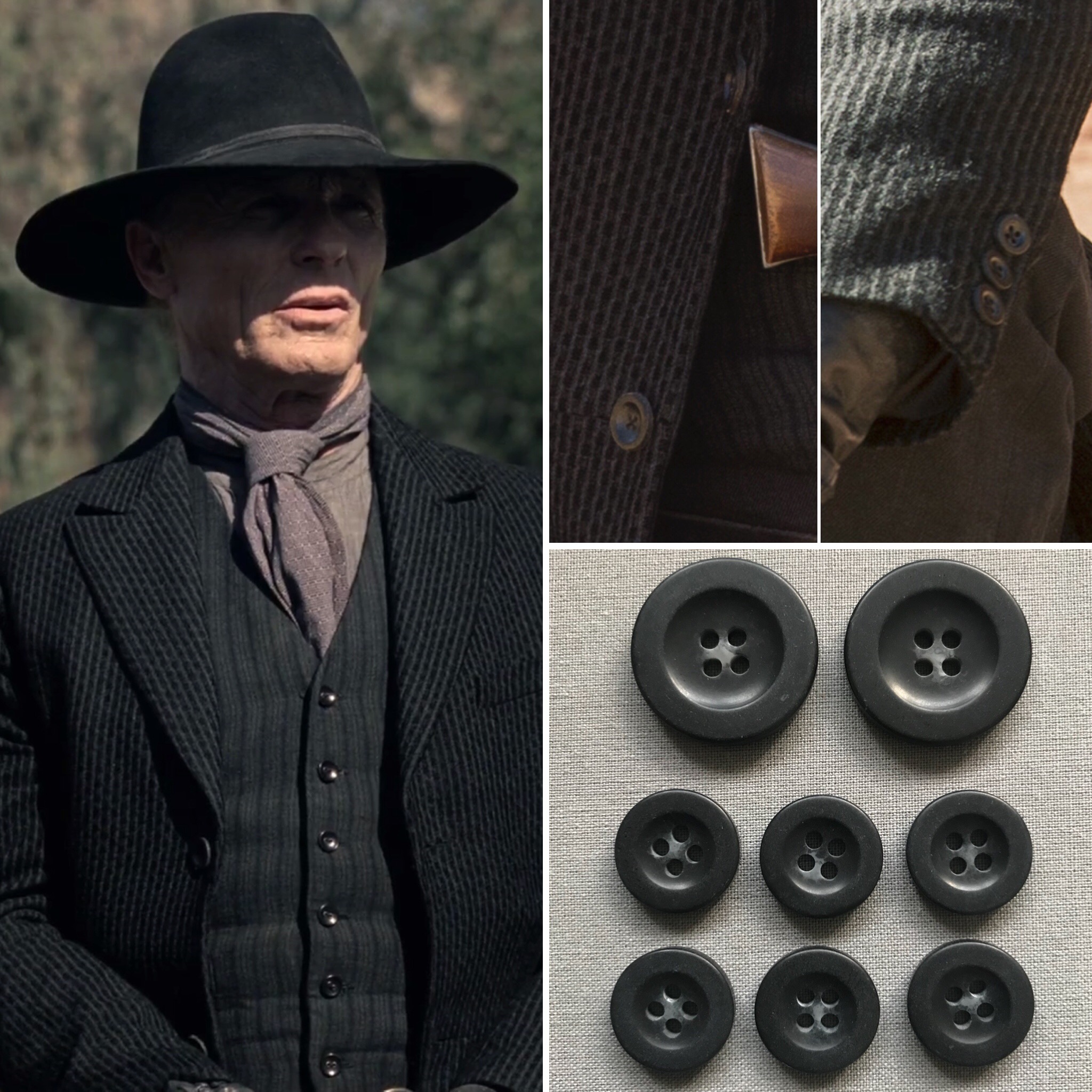