The Story:
Wedge Antillies was tasked by the Rebellion to come up with innovative ideas to help overcome the numerical superiority of the Empire. One of his special projects was to find a way to obtain reconnaissance data about Imperial forces in heavily fortified areas. Stealth probes and disguised vessels had little success- the Imperials detection equipment was able to isolate and target them far too quickly for any useful data could be obtained.Â After many unsuccessful attempts Wedge hit upon a new strategy- a high speed probe which hopefully could arrive, pass through and jump out before it could be targeted. He rigged up a test drone with a high thrust short range sublight engine, a preprogrammed hyperdrive with only one jump prepared and sent it through an imperial shipyard storage area. The probe was able to jump in, take one reading and jump out before the targeting sensors locked on. The info gathered was not particularly useful, but it did prove that a fast probe was the direction to pursue.Â Now to make something useful. Wedge checked what was available and having a preference for the reliable T-65s he found one which had been removed from active service due to failed S-Foil actuator. The mechanism had been deemed irreparable and the fighter was being stripped for parts. He gathered a team together and they began work.
First thing was to remove the ruined S-Foil actuator entirely and weld the wings together and secure them to the air frame. With the space in the aft end now available he looked around for a suitable booster engine unit. He found a four engine cluster used in rapid deployment escape pods, this was ideal since the engines were designed to provide a very high thrust for a short time. He next removed the two lower laser cannons and redirected there power for use in the sensor suites he was adding. The sensor suites were modular and mounted on the ventral side of the now solid wing. Wedge replaced the Droid socket with a simple navigation computer since the craft would be used for preplanned jumps. He added fuel tanks for the boosters and gave the a test flight. That first flight was a disaster, when the additional engines ignited the sudden acceleration almost ripped the wings off. He brought the ship in and after reinforcing the welds he added two trusses from the wings to the nose. The next flight worked well and they decided to use the new craft to scout an Imperial base on Enjuus Prime.
The T-65-B-R exited hyperspace and Wedge adjusted it's alignment, activated the recorders and then hit the boost. Despite having the internal compensators on full he almost blacked out from the surge of speed. The X-Wing crossed over the base, even passing between some orbital defense ships and then disappeared back into hyperspace. When the recordings were analyzed they not only had the exact position of all the Imperial forces but even the placement of the Stormtroopers on patrol. Wedge returned to his personal starfighter and Red squadron took turns on the scouting missions. This new craft proved very useful in giving an edge to the Rebels during the conflict. Sadly it had one of the aft boosters blow during it's last mission, sending it pinwheeling out of control. The pilot ejected safely but the damage was too severe to repair quickly. During the Battle of Endor Wedge kept thinking how things would have been so much different if only they had been able to properly scout the location before the fleet had jumped into the trap.
Many years later when Poe Dameron was going through the archives he came across this unusual project- he applied the the concept to his personal fighter which did not need much modification due to it's newer construction, plus he did not need the advanced sensor suites, he had a different idea on hot to use that boosted speed advantage...


The Build:
This build started off as a ponder of what to do with some left over parts from the Lando's Falcon build. The quad of engines from the escape pod seemed to look good on the back of the classic X-Wing, but why would the original trilogy era need a boosted ship?- how would excessive speed be useful.I then thought about the SR-71 Blackbird and the overflights with the USSR. That spyplane was so fast it was out of range before the Soviets could launch interceptors. A boosted X-Wing could fly through Imperial forces in a similar manner.Placing the engines at the rear of the fuselage required removing the rear plate which (according to references) was integral to the S-Foil separation control. This was not a problem since this was not going to be needed, so I fused the upper and lower wings together. The engines tucked in nicely but ironically fit so well they looked like a production option. I wanted to make this to look like something a bunch of techs cobbled together with what was just on hand. Since this additional booster was added on, having it's fuel and control systems should looked slapped on as well.OK, we have a bunch of new thrust on the fighter, now what mods would be good for taking useful reconnaissance. I figured since it would be flying over it's targets, placing most of the sensors eould be useful on the underside. I wanted to have some massive sensors, like they were pulled from much larger vessels. Since it was not intentionally going into combat, I removed two lower laser cannons. I ran power feeds from the laser cannon mounts to the new sensors.Â The underside of the X-Wing has a storage compartment, seen in TESB and no longer of use for the fighter's new mission. After spending some time carving away the access hatch it was ready..Â The FineMolds 1:144 dish was just about perfect for this new location I bashed together some wing tip sensors to match angle of the big dish, all are static but it is implied by the design to be adjustable to face forward or straight down, with the wing tip ones also pivoting from side to side.I played around with the idea of removing the distinctive nose cone, exposing the cool hidden sensor unit Bandai included, adding some sensors to front. I decided to leave that area stock, figuring that the avionics and basic functions of the ship still be original. I did remove the R2 unit though.The last real mod was the two girders. The T-75 was a new ship, the old T-65 was worn out and past it's prime. The new booster thrust would be considerable and obviously stress the ship past original specs. Reinforcing the X-Wing would seem necessary and I wanted something dramatic looking.Â As a finishing touch I gave the ship brand new red squadron markings, not a fighter designation though. Wedge was proud of his new creation and wanted the universe where it belonged.

Odd build notes:
When I trimmed the wings back about a half inch at the rear for the engine package, the new piece fit in so well when the fuselage halves are together no glue was needed to keep them in place, just like an original Bandai part.A water spill destroyed most of the included decal sheet, I took that as a sign and left off just about all the traditional hull markings. This sort of works for me, giving an impression of a one off build instead of a production model. When weathering I kept the Red Squadron striping clean, I figured a proud Wedge applied that last...

About the photos:
This has been a fun project and seemed to take it forever to complete. I took these photos in a hurry (not even using the stand mount plug for the underside shots). I will be taking some additional photos with better lighting and also will be posting some of the underconstruction images as well. 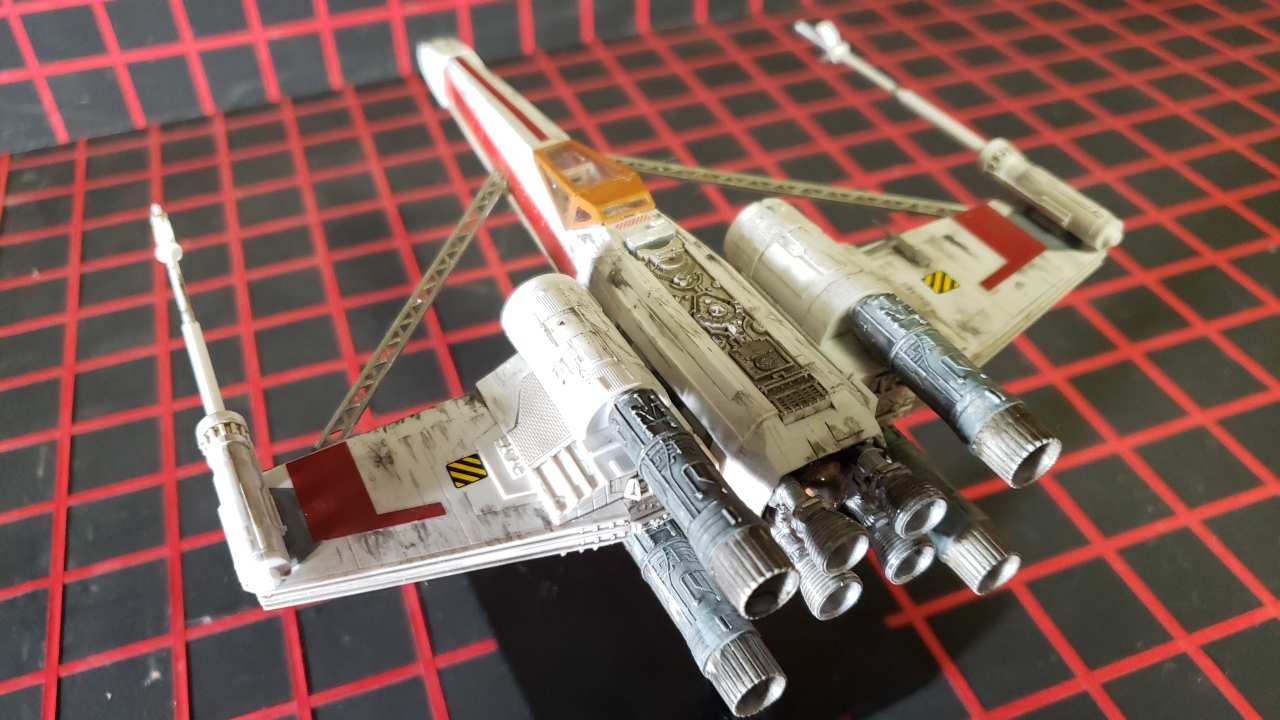 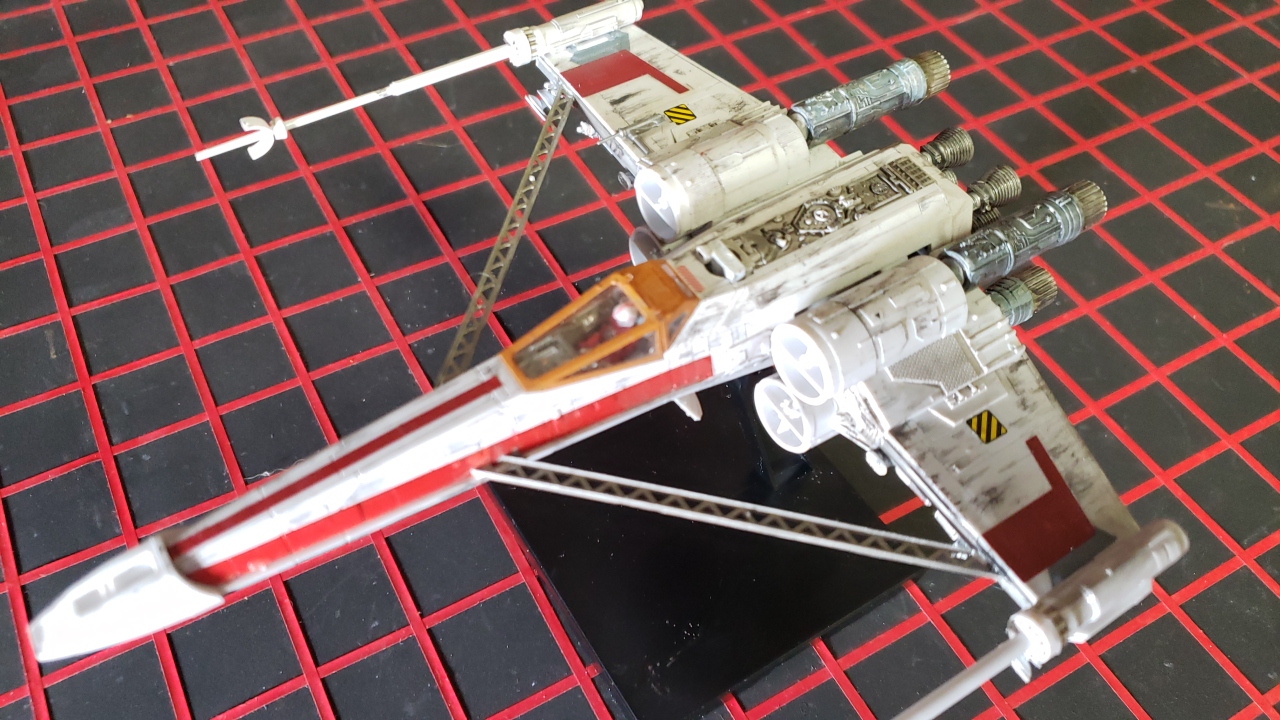 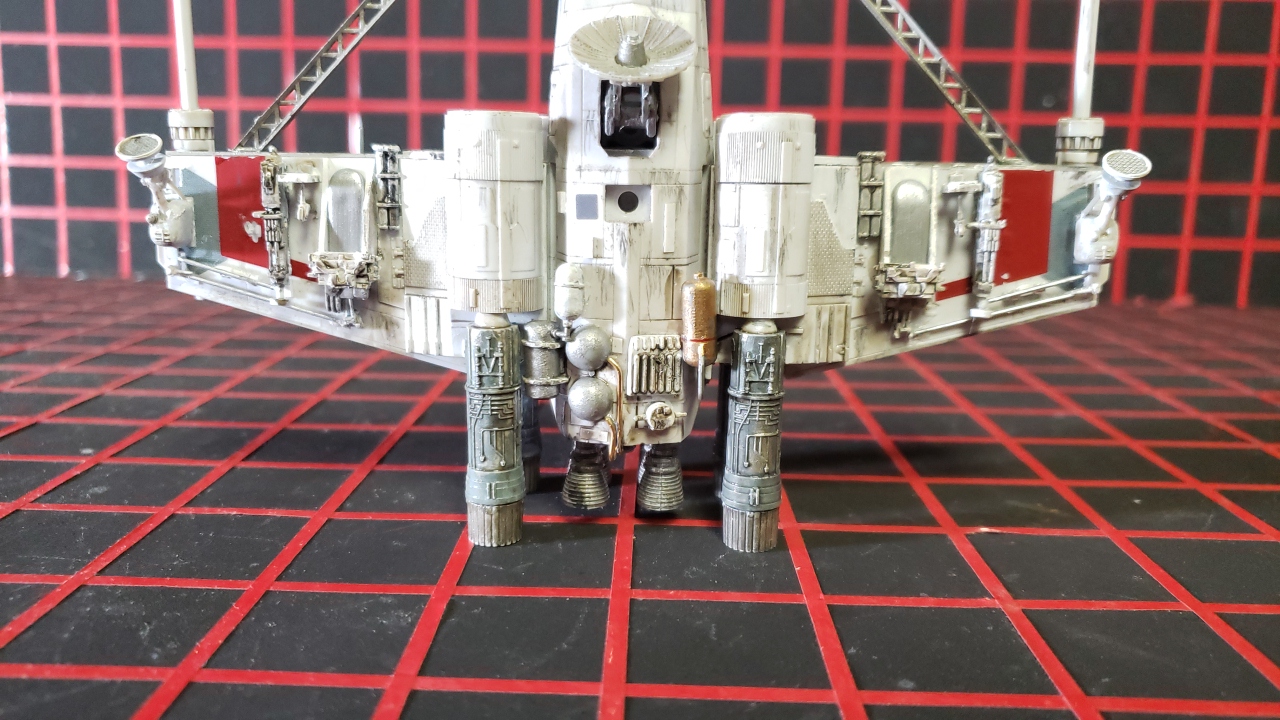 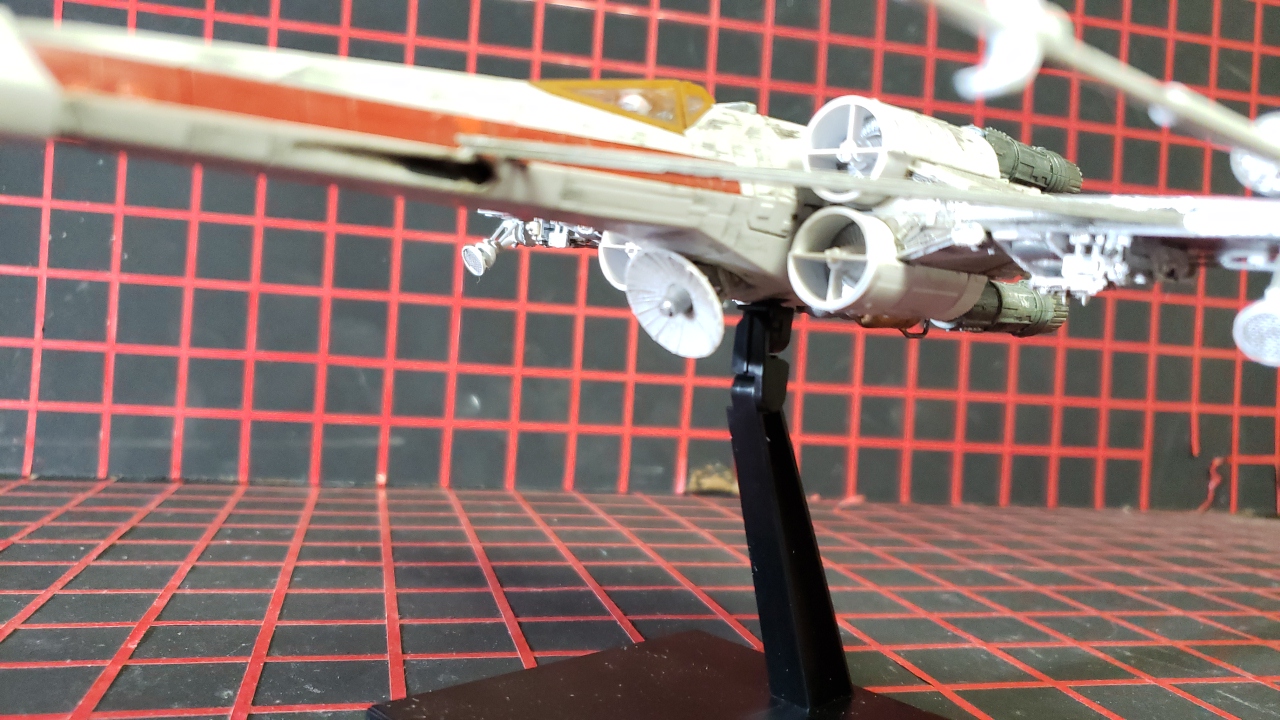 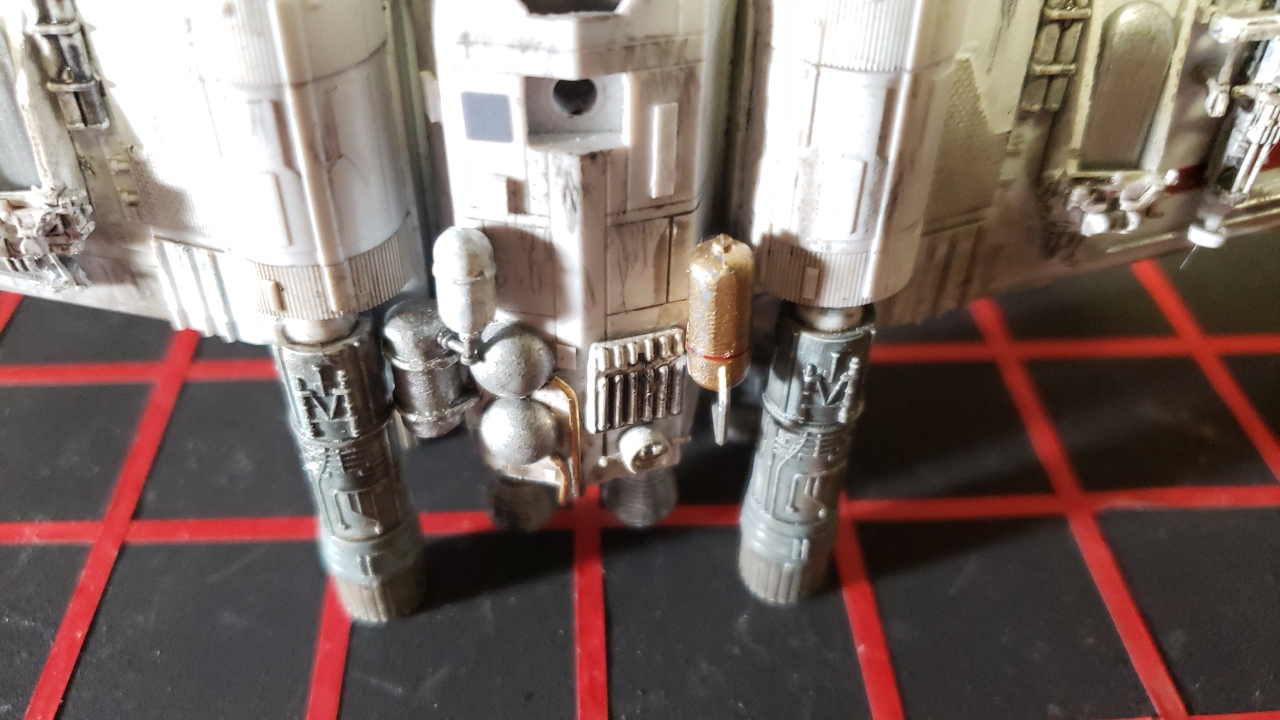 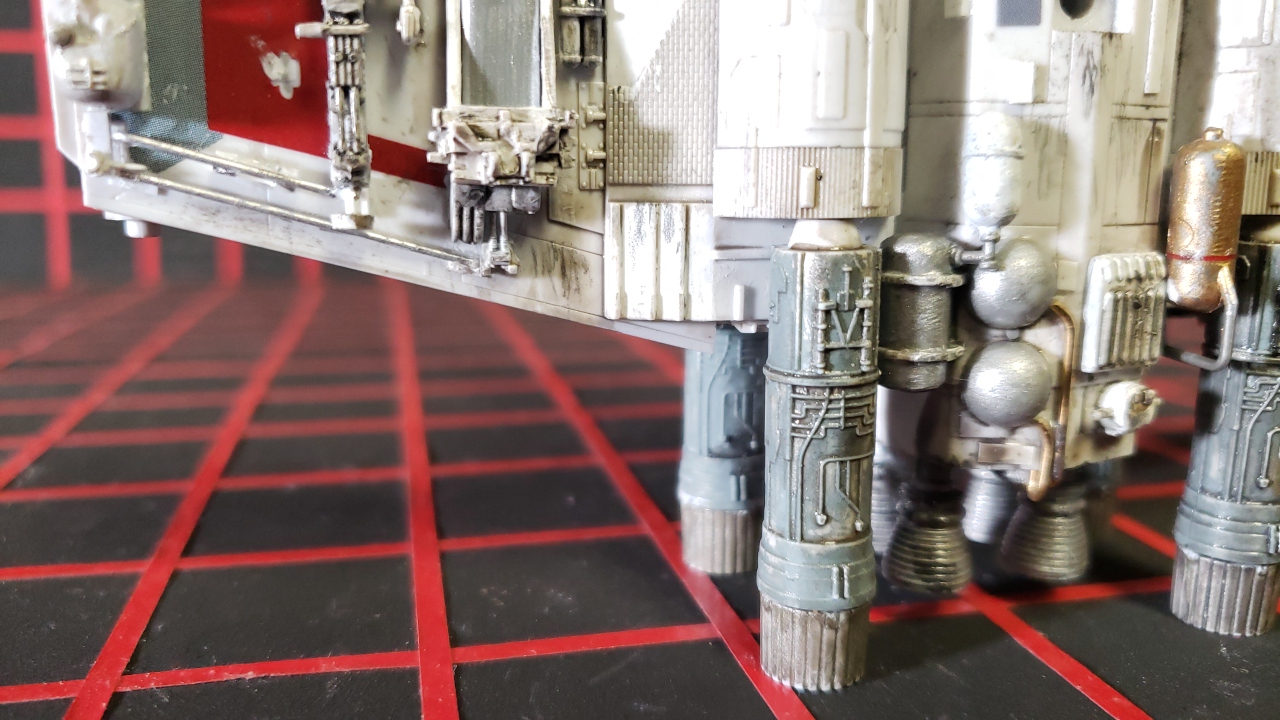 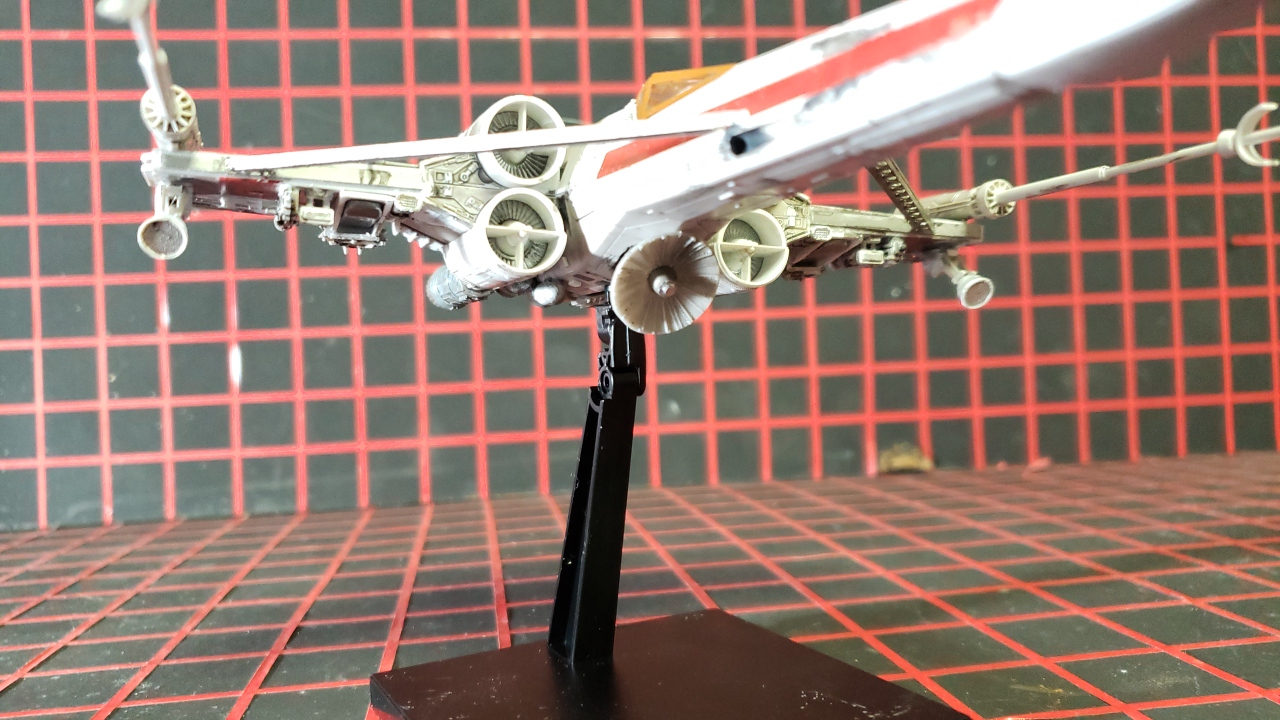 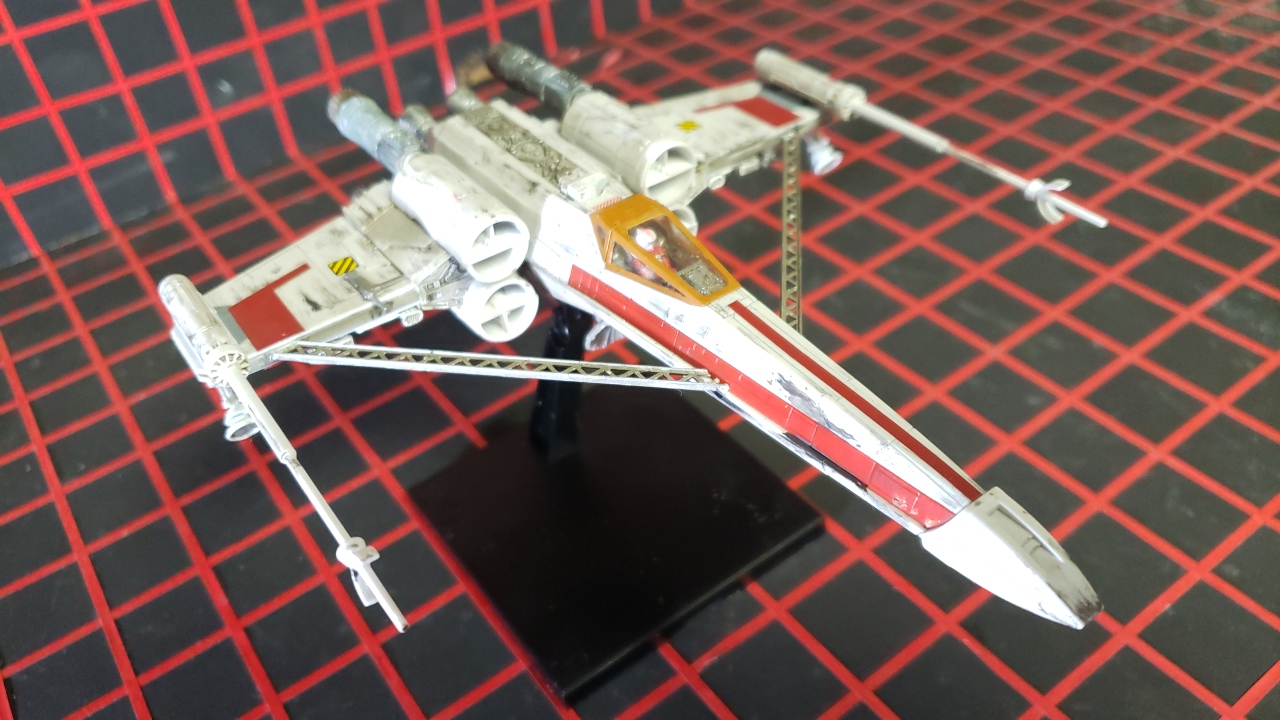 Sorry for being so wordy with this post, a lot of thought went into this build and I sort wanted to explain why it looked so weird

I really like this! The back story is as cool as the model. Where you at all influenced by the recon X-wing in the Rogue Squadron comic?

Only read a couple of the Rogue Squadron novels when they first came out and none of the comics- I just have an overactive imagination I guess...

Some construction photos- I do not take these often, I get into the zone and documenting things is my last thought during this.
These two focus on adding the new aft engines: 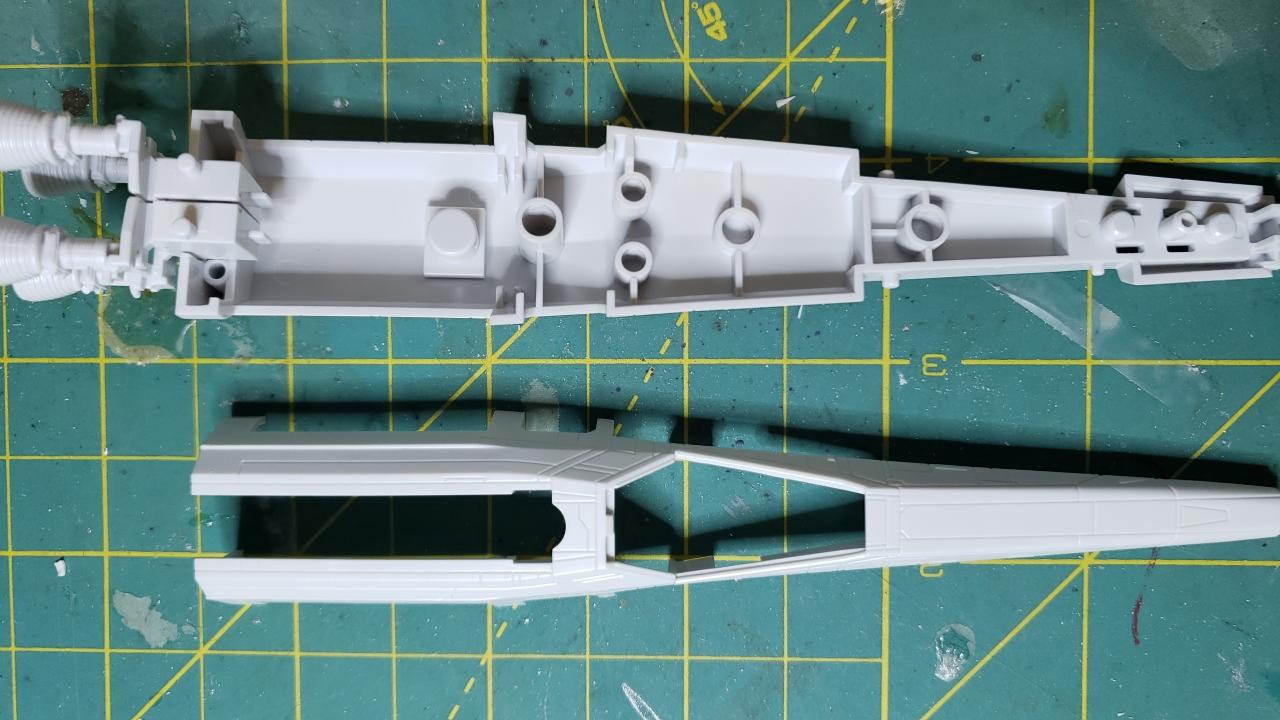 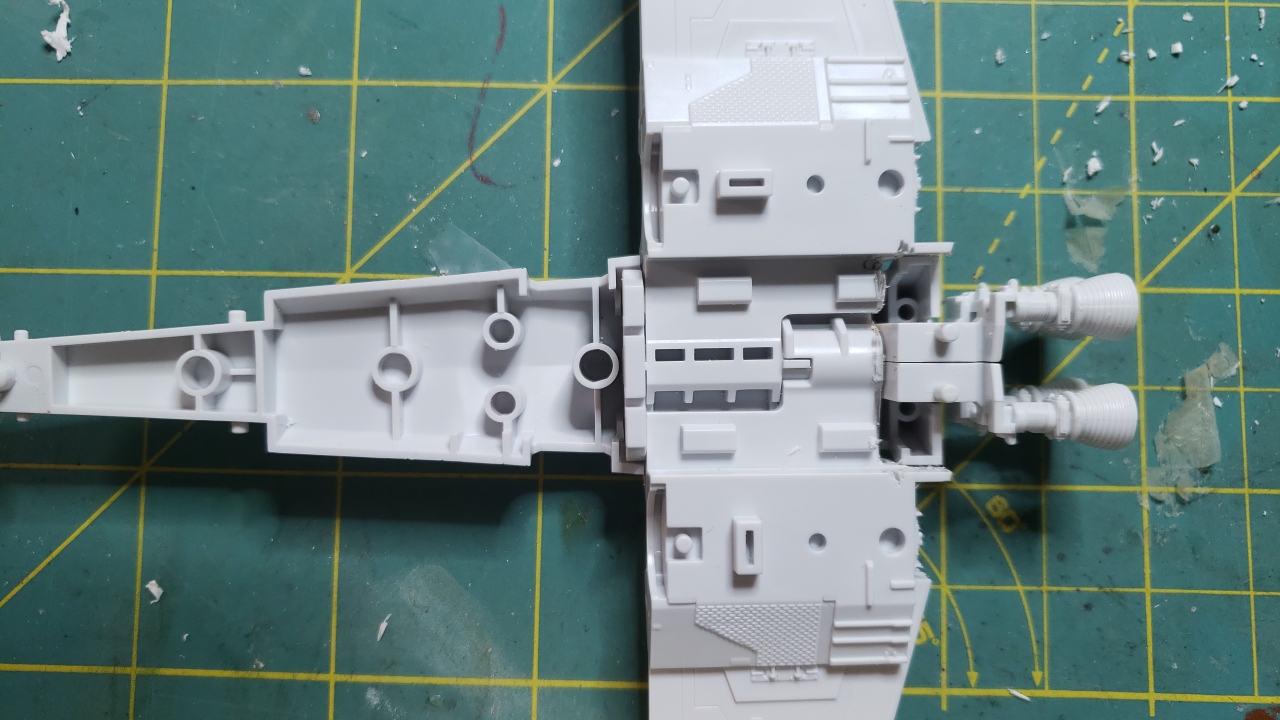 As you can see- they fit back there like an original Bandai part- no glue needed. I did trim the back of the joined wings back about a half inch for clearance.

Lower view of unpainted sensor units. The two empty housings are awaiting the silver "smooth Pods', which began life as the landing skids for the 1:48 Paraglider Gemini Capsule. I wanted a large out of scale sensor pod like it was pulled from a much larger capital ship. The lower cargo doors have been cut away and the edges being sanded. I placed a support behind for the FineMolds Falcon Dish to attach to 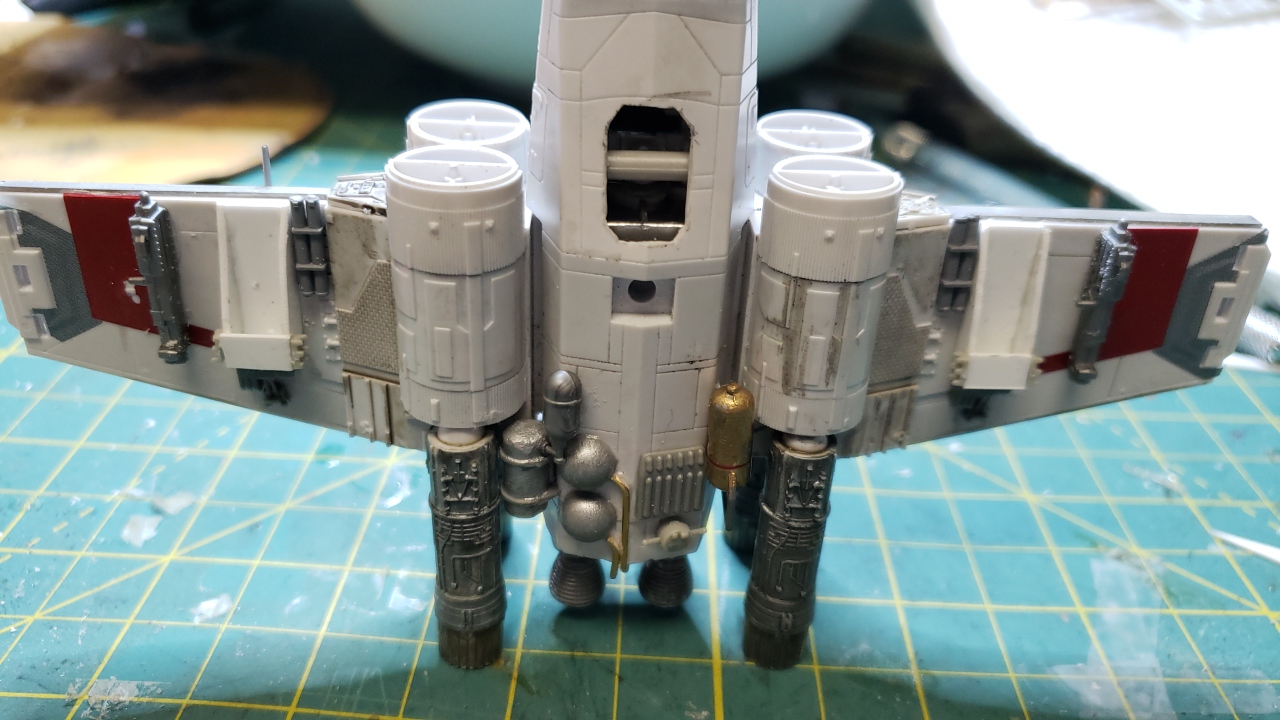 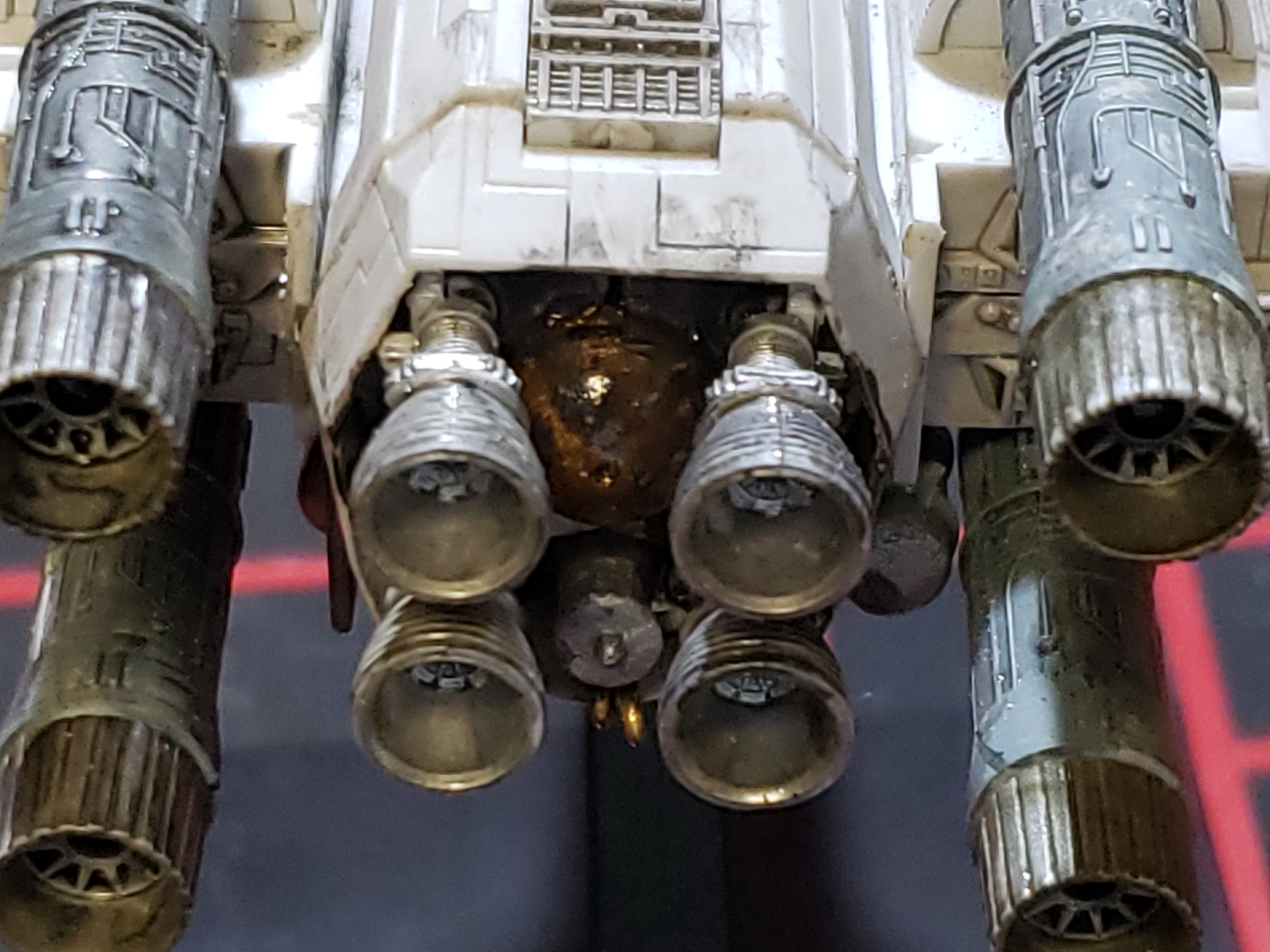 Port side nose weathering- I wanted to have all the weathering streak front to back with the theory the stresses of full thrust flight caused the panel gaps to flex and oils and other dirt escape being drawn backwards. 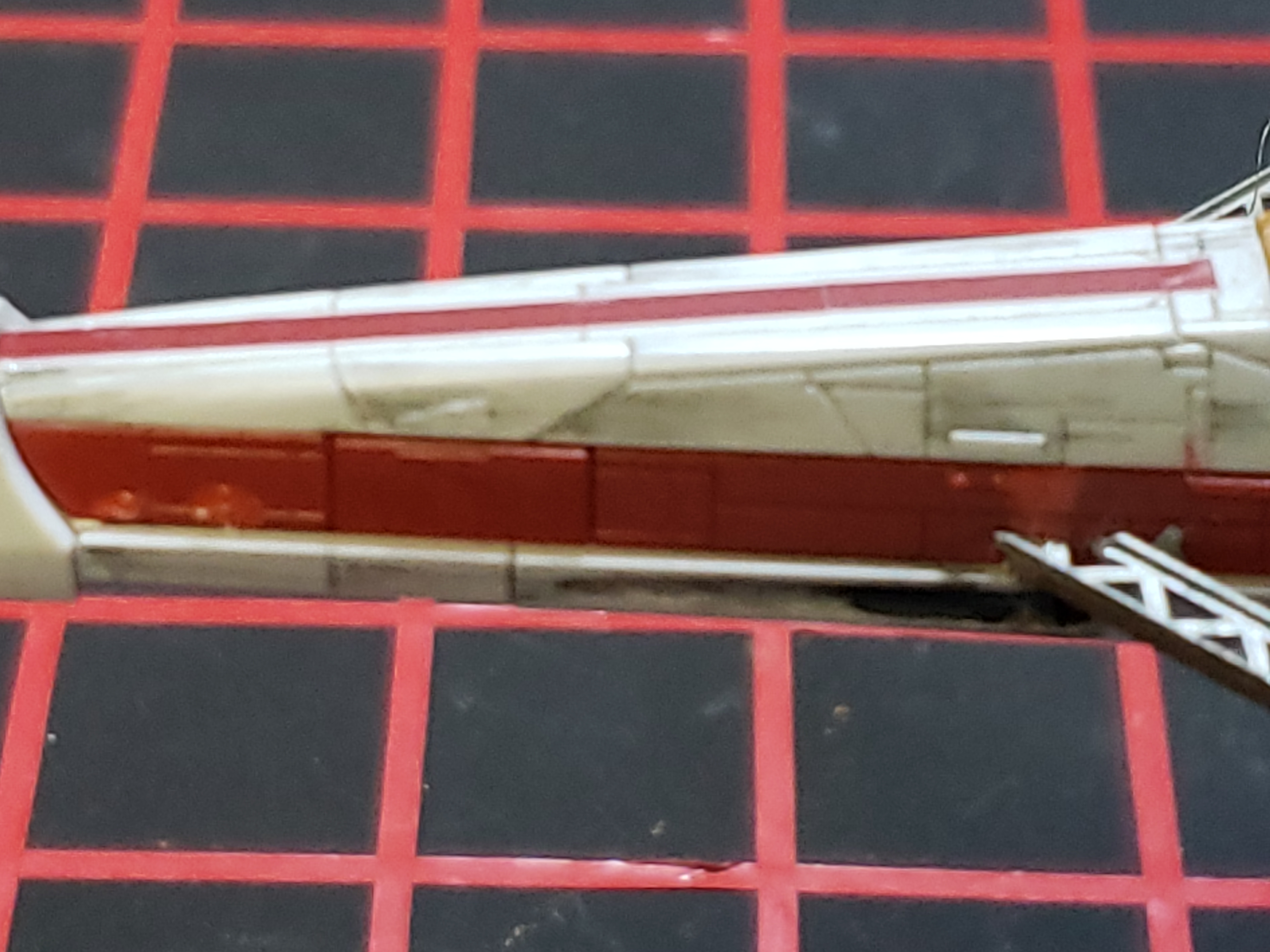 My Falcon in the current FSM
2