Hi everyone! New user here. I'd like to share my project and maybe get some advice as I move through the fabrication process from more experienced crafters.
I started this project while ago, with initial goal of making game 3D model based on concept done by a good friend of mine Alexey Kropachev.
This is something that doesn't exist in W40K universe (some hardcore fans might even hate it) but we both liked the idea.
Thousand Sons legion sorceress armor. 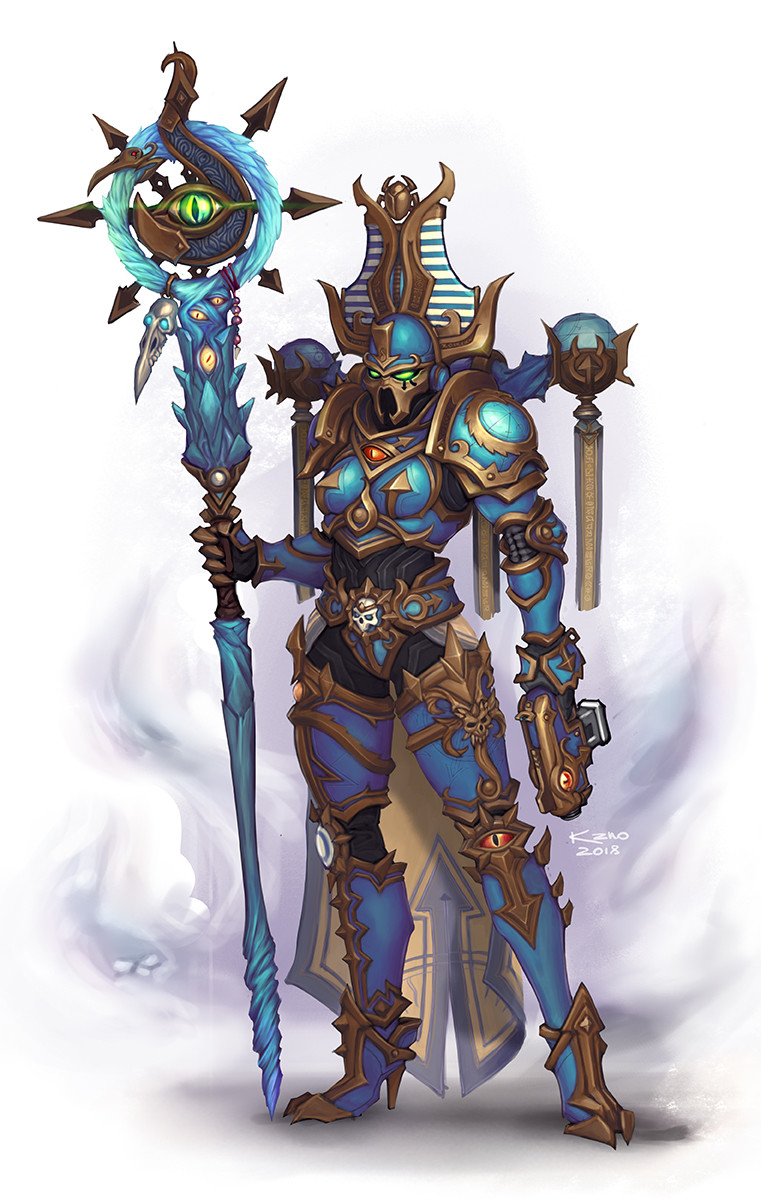 Character is about 70% finished, I had to put this project aside to work on something else but I plan on finishing it this year..
Here's some renders of her. 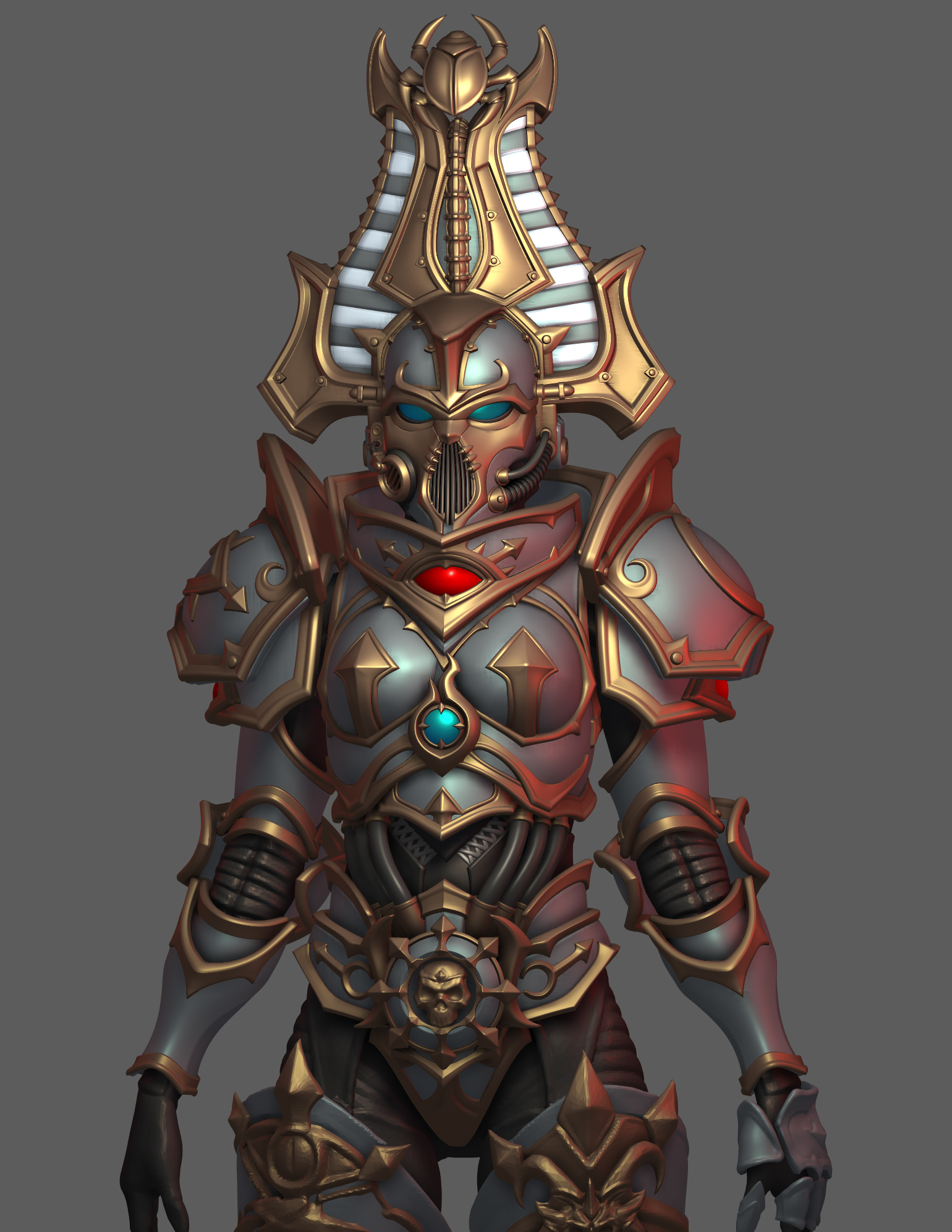 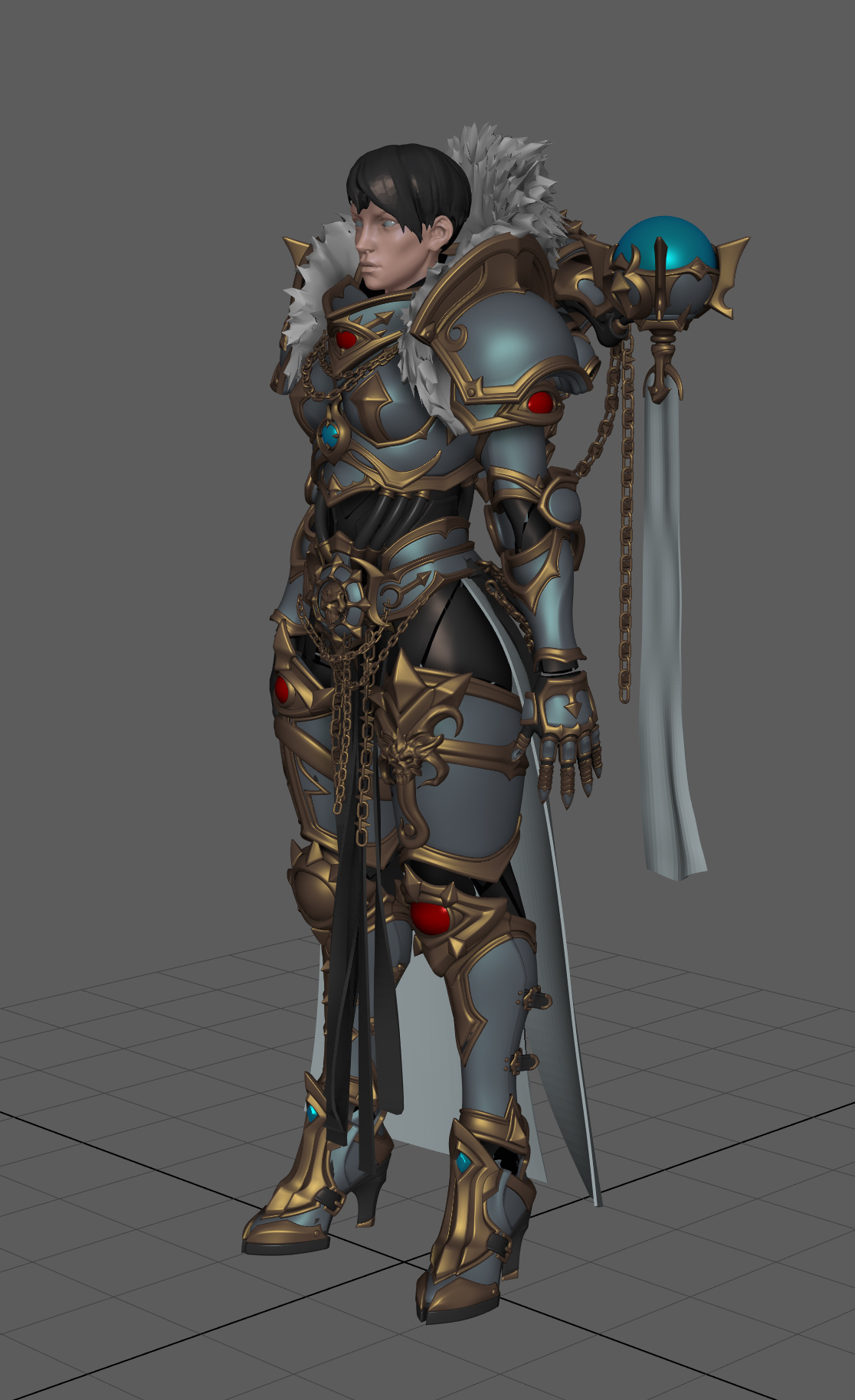 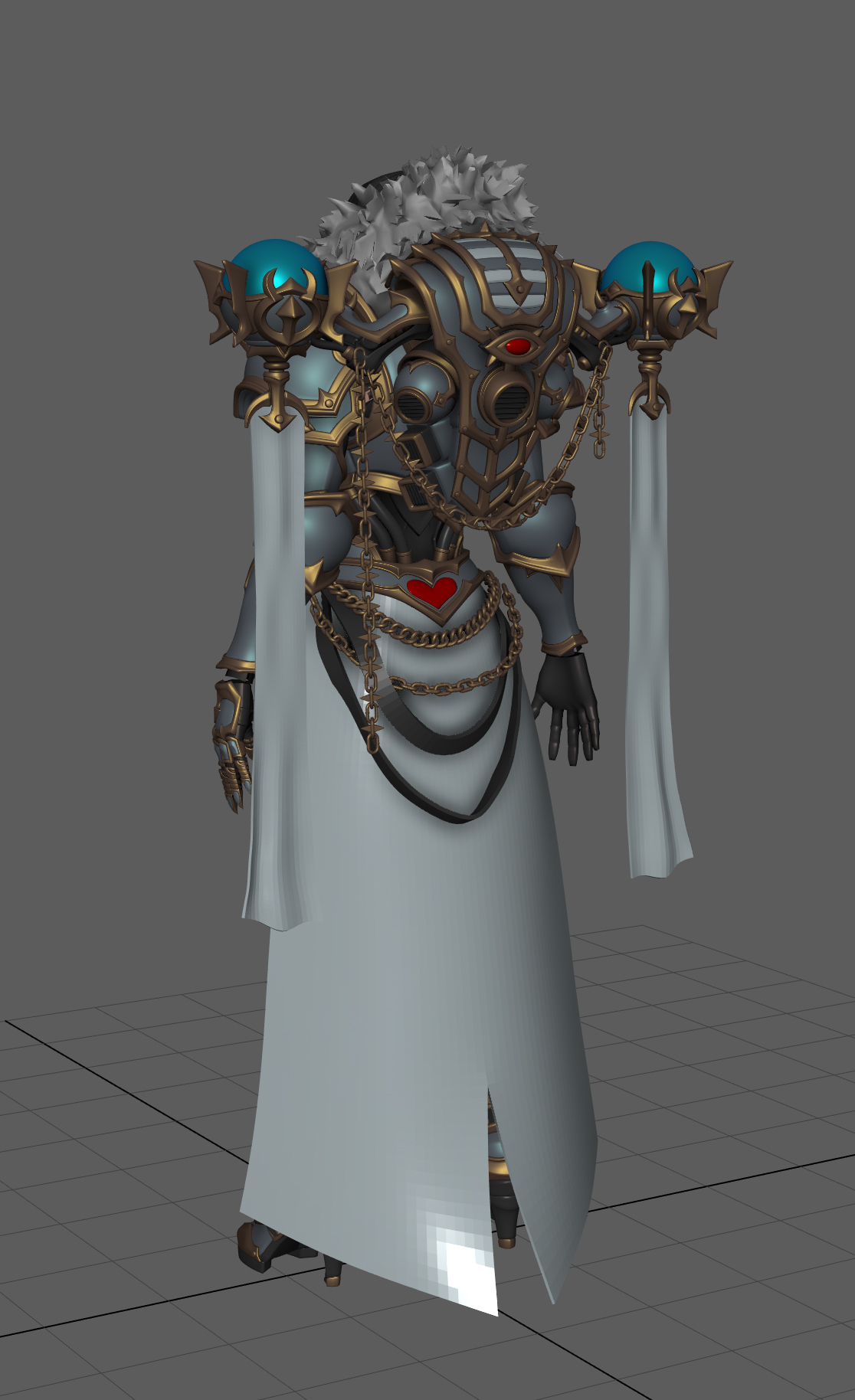 We decided it worth to try and print this helmet in full size.

I had some experience of printing assets before, but this is the first attempt of building something of this scale. So, some mistakes were made along the way but it's cool, I'm learning a lot as I go. Next one should go smoother.

Now with larger Ultimaker S5 print volume this should be way easier to make. Build area is large enough to print a human head sized object in one pass, however it would take few days (this printer is very slow) even on lowest quality settings, 0.2 mm layer height. Going even 0.15 mm increases print time roughly by 50%. I might try that in the future, but for now 0.2 mm worked just fine, this model doesn't have details that require higher fidelity printing.

Using PLA/PHA filament from ColorFabb, the one that you can work with acetone, but turns out we didn't need that for few reasons: material is very expensive, $42 per spool, and we never needed acetone to work the surface - regular bondo/primer combo worked well. Just tons of sanding in hard to reach spots. 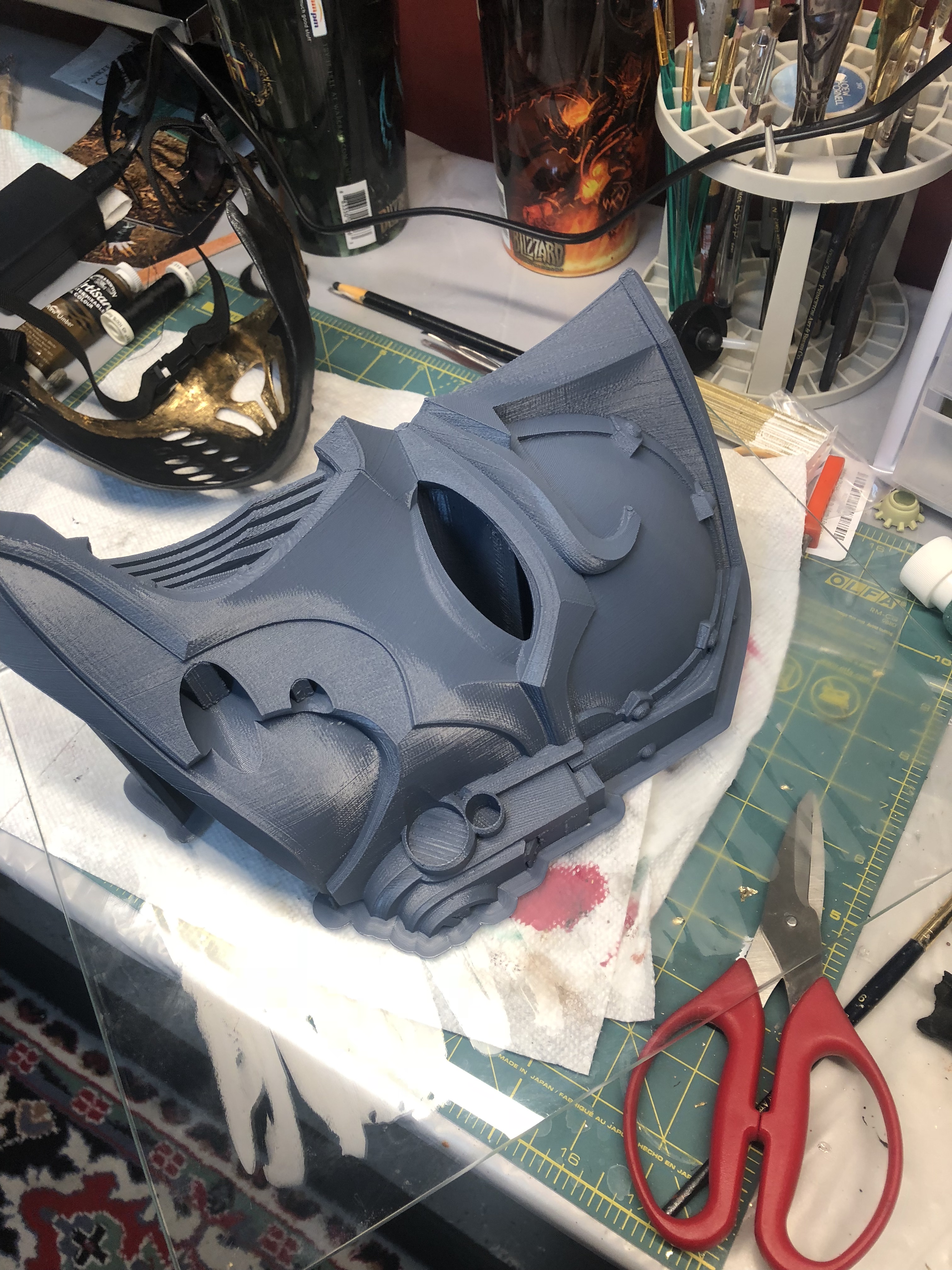 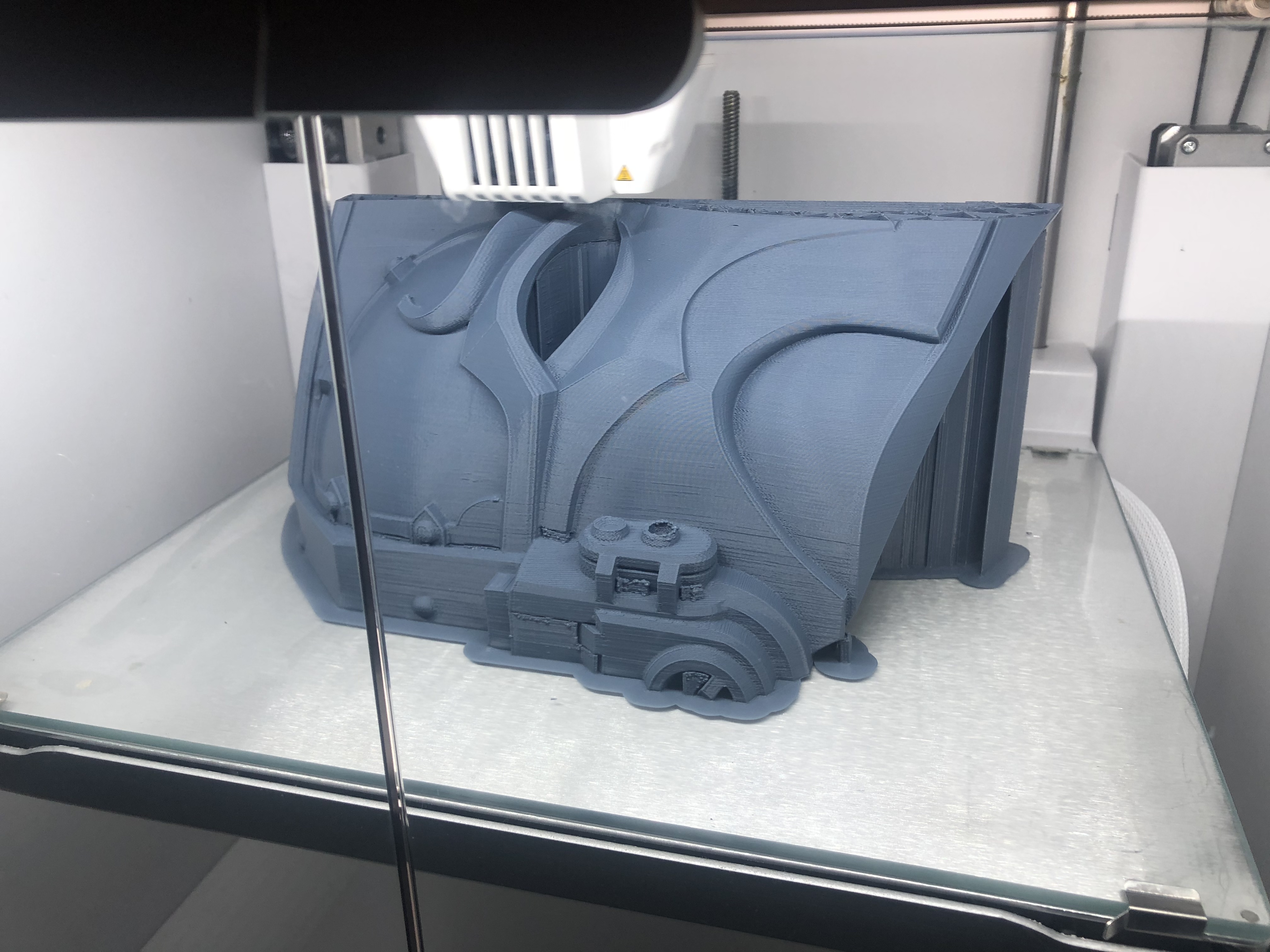 I underestimated factor of PLA shrinkage, and you can clearly see some warping happening on large flat areas that are supposed to be straight.
I'm not really sure yet how to counter this, maybe increasing density of infill, which will increase print times, or switching to ABS next time, which is less prone to shrinkage but very brittle and can shatter easily if dropped. 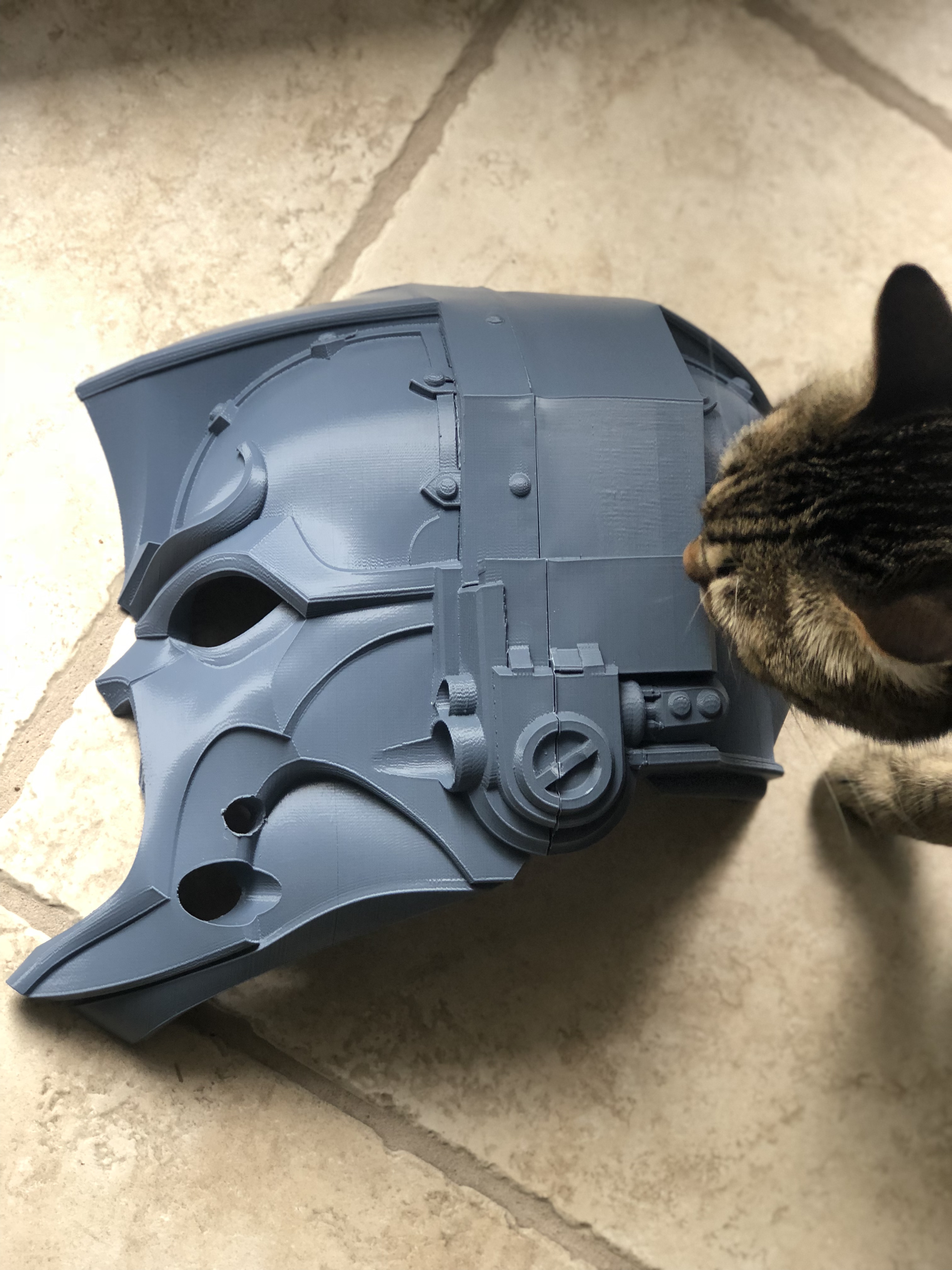 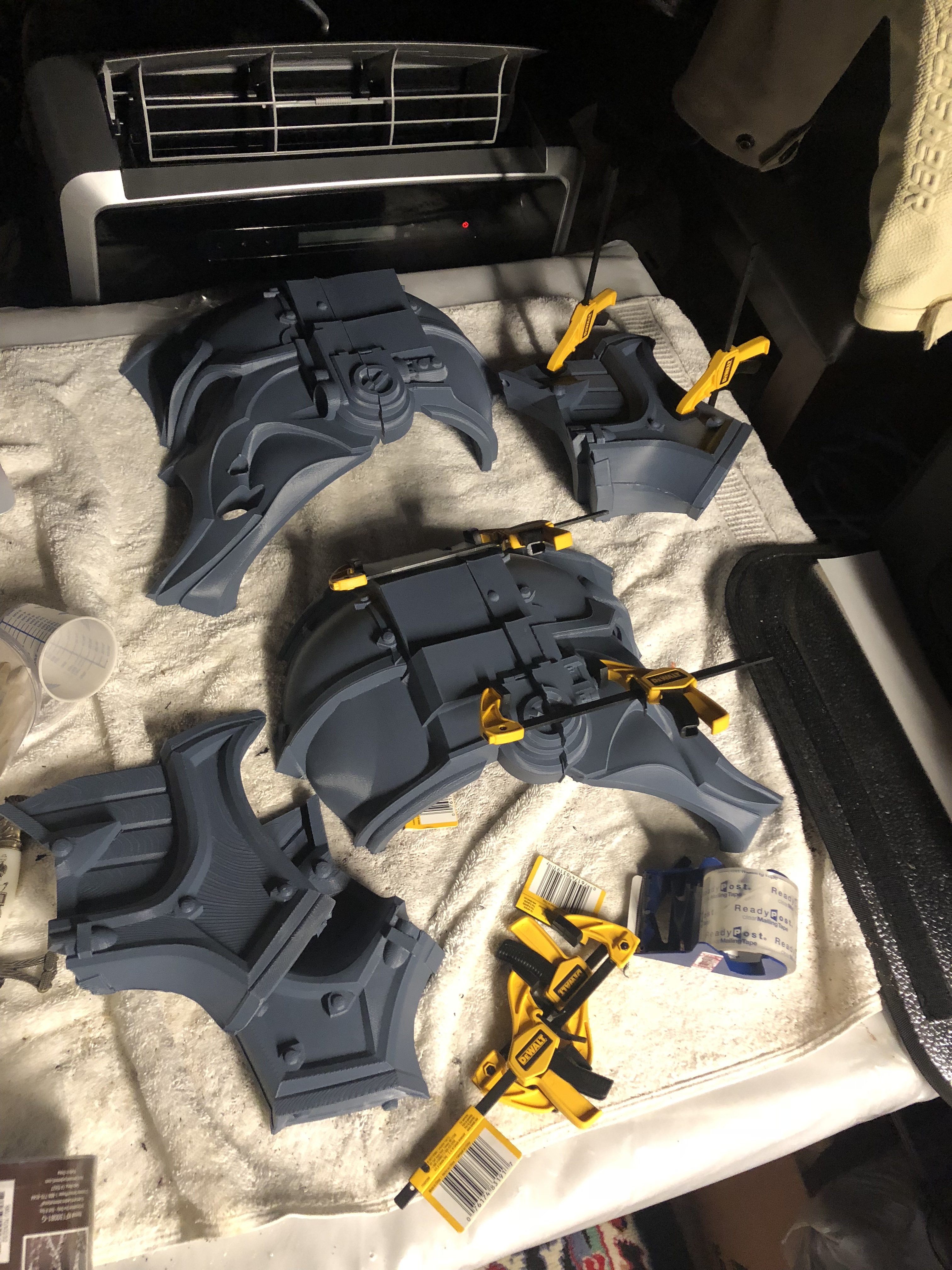 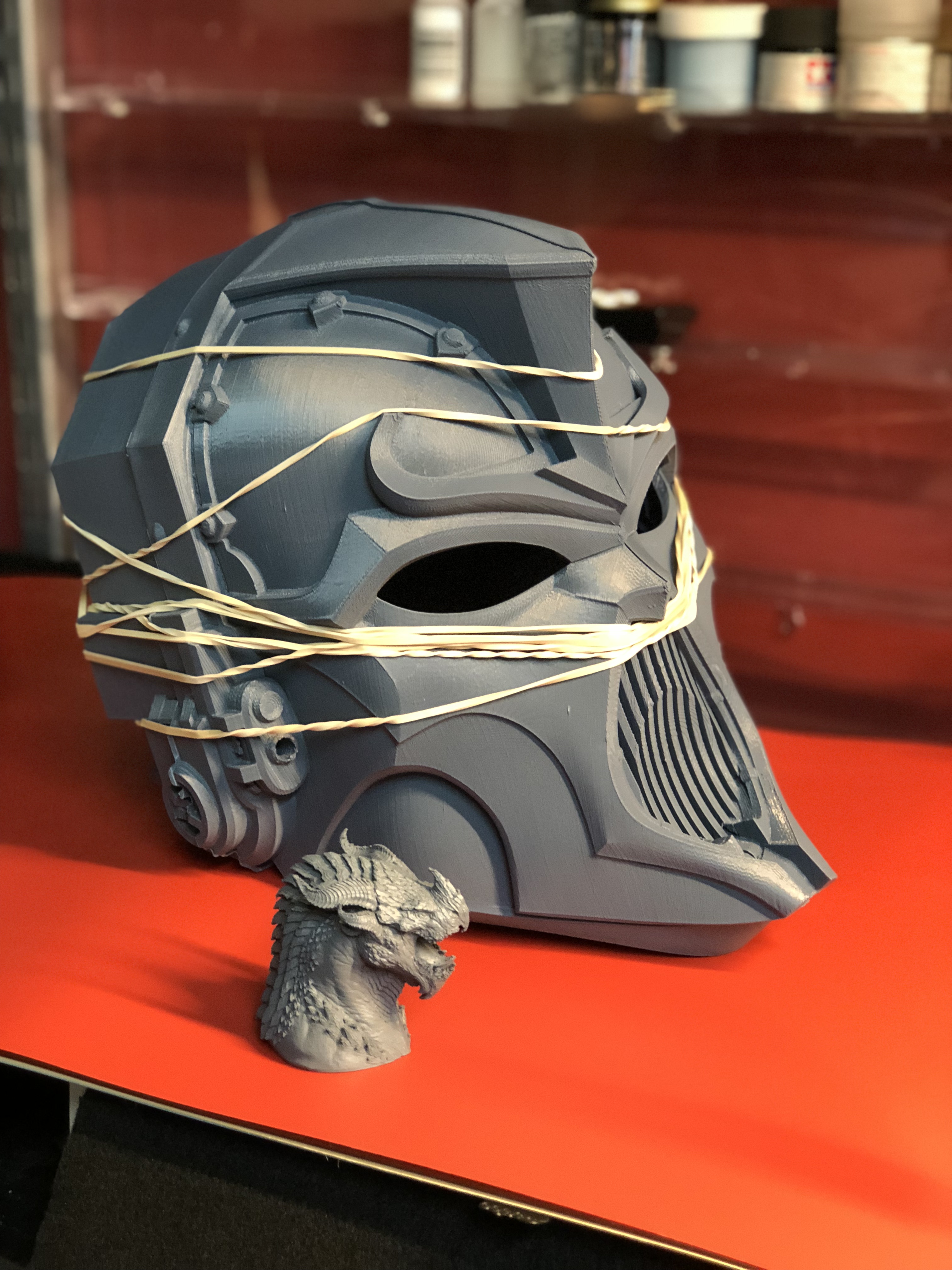 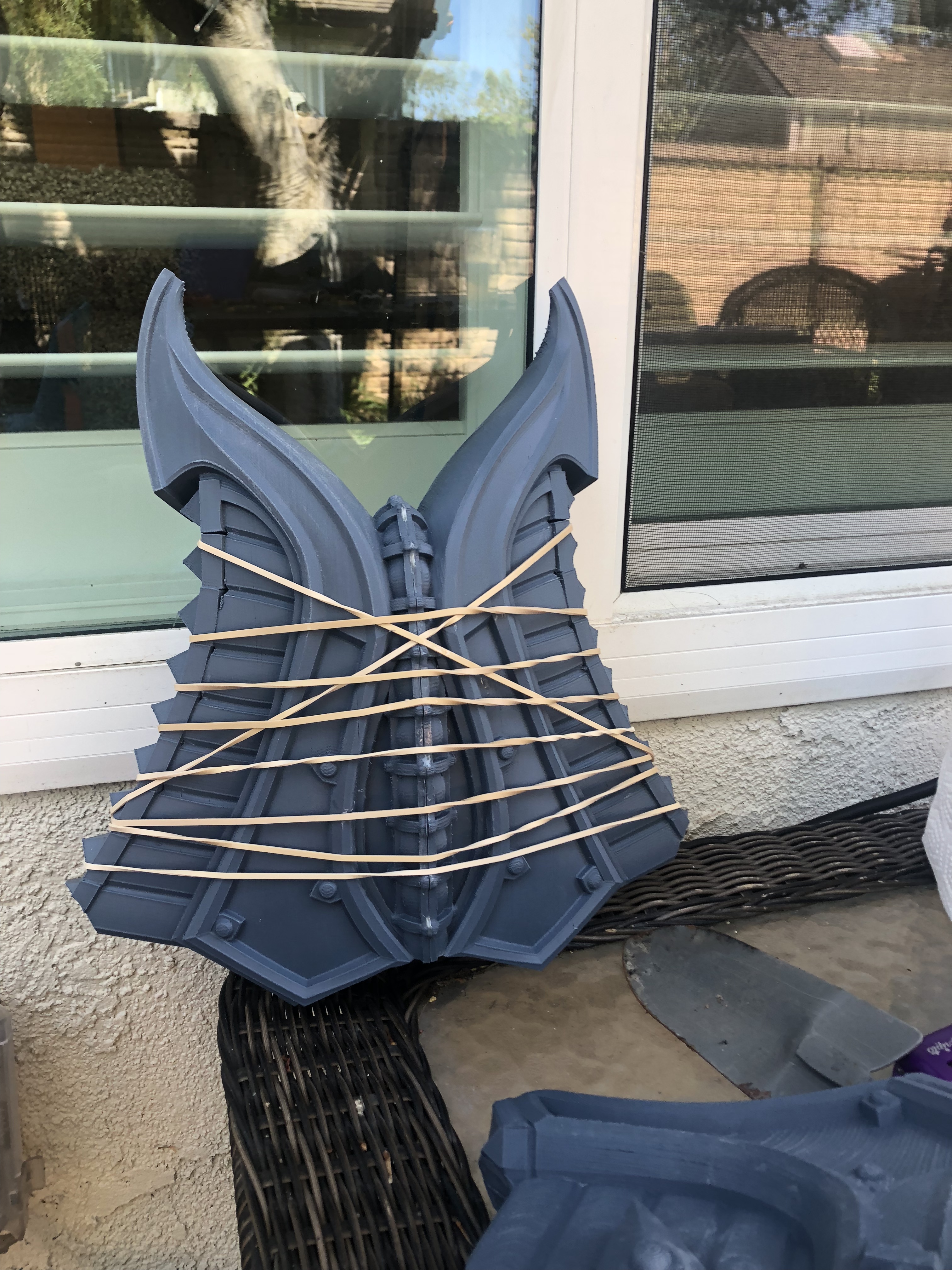 First round of sanding and priming.
Only now realized we skipped one little cylindrical detail on the front, where horn connects to the side of the head. Bummer. But it's not very obvious and I'll make sure it's there next time I print that. 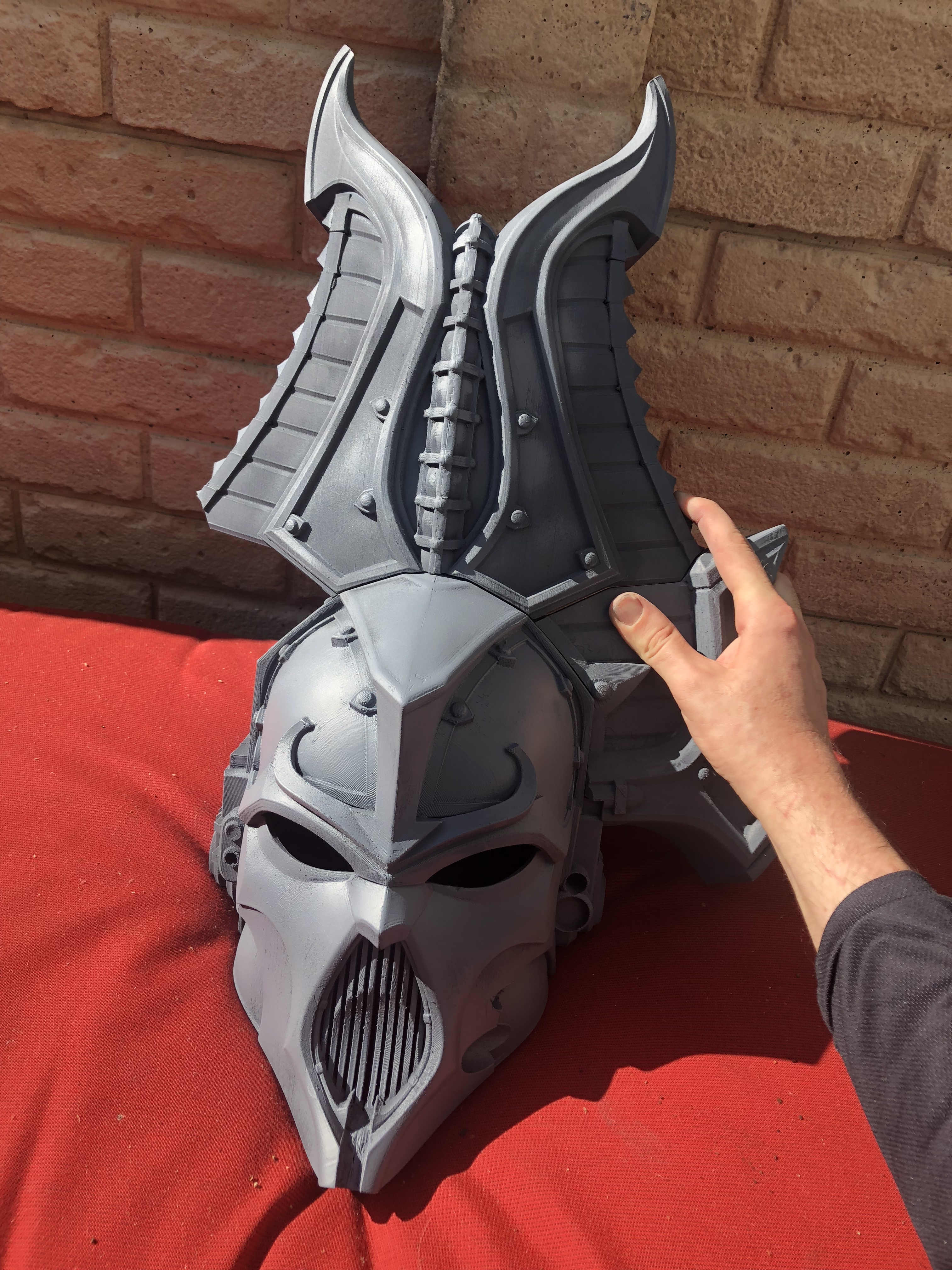 Was using Army painter spray cans $15 each, quickly burned through 4 of them. Is there any cheaper options? Switched to Krylon primer after this, but I wonder if there's anything else acrylic-based for large builds like this one. 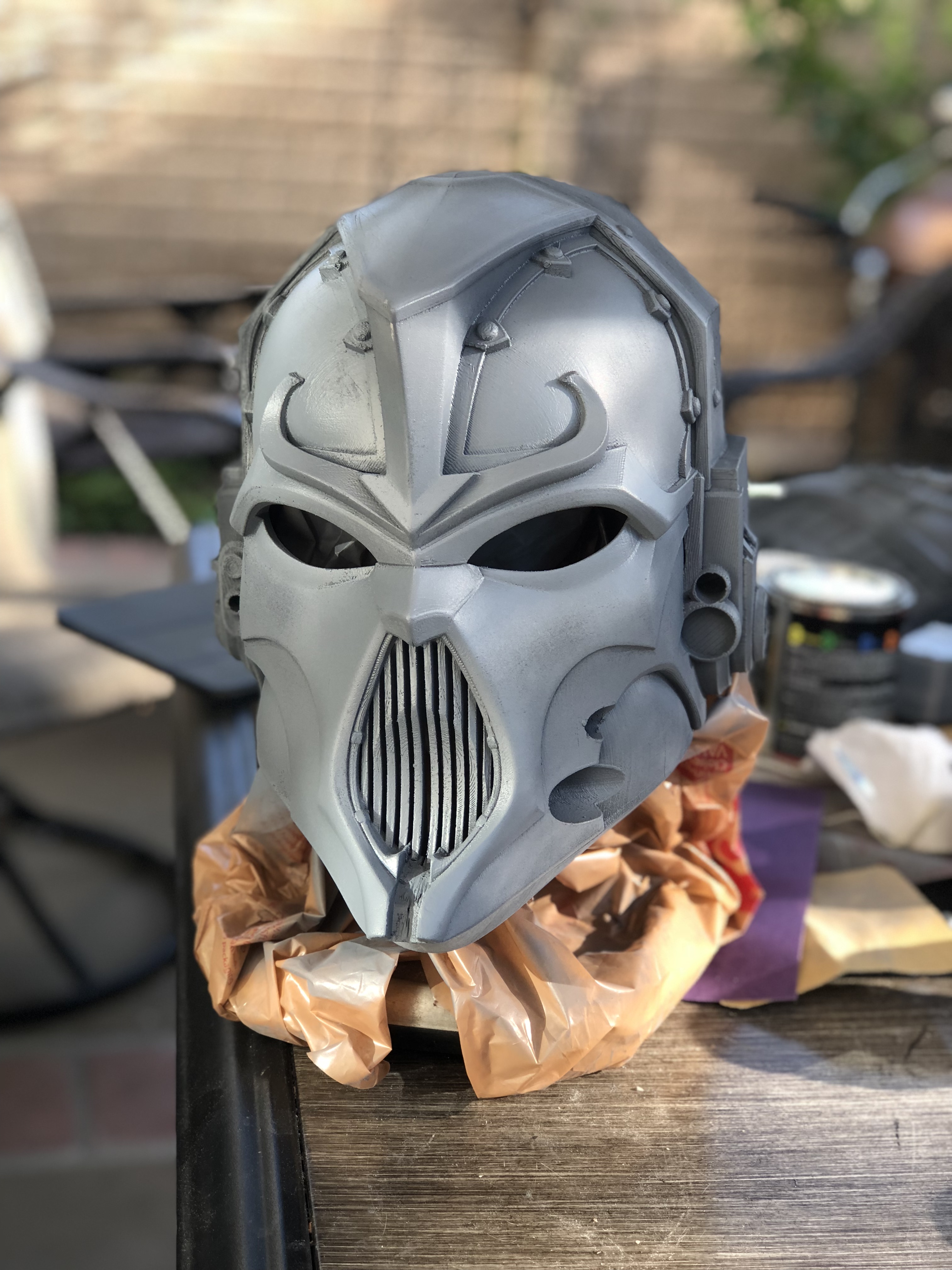 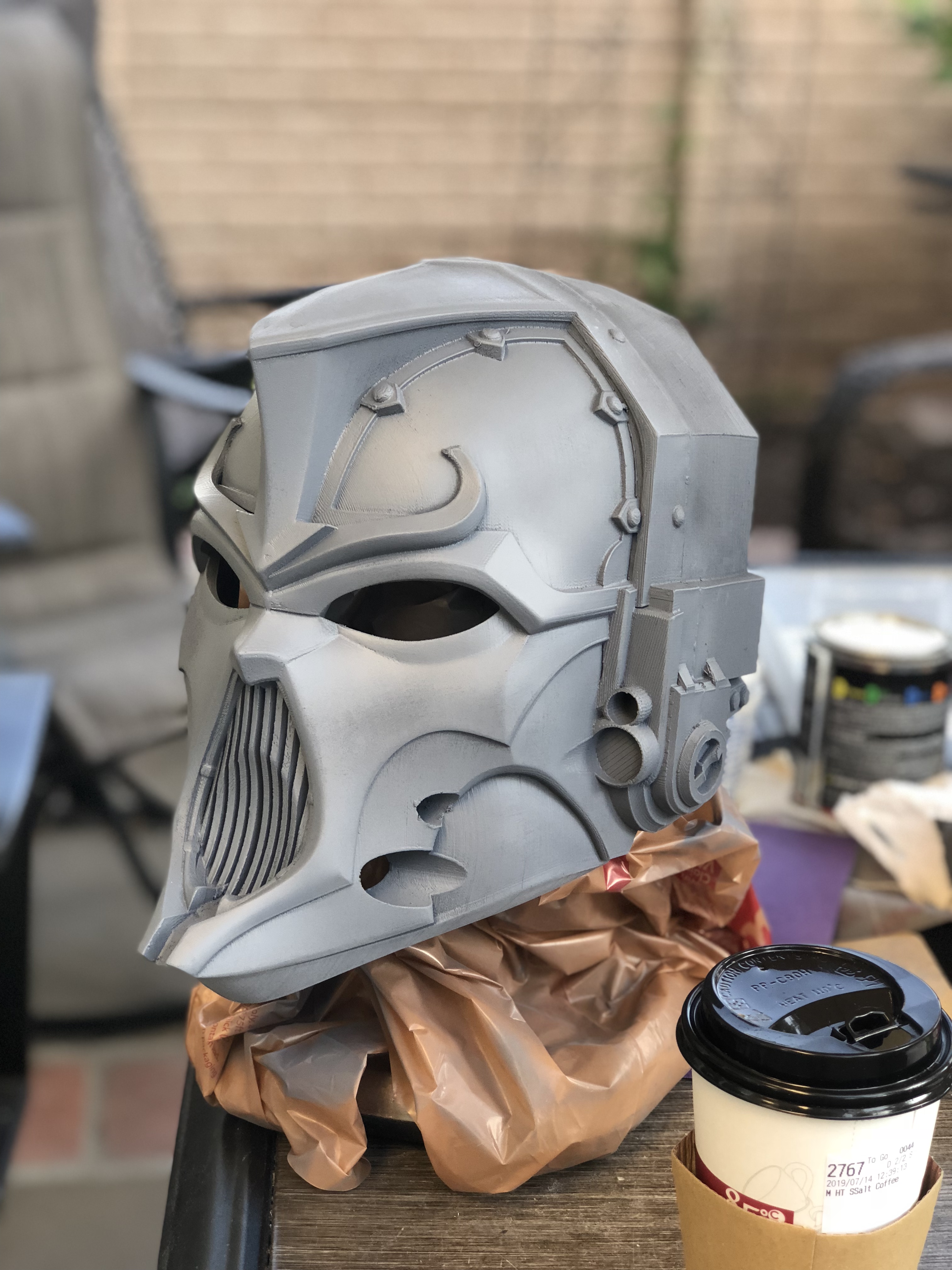 Deciced to print scarab figure in one pass. Normally I shouldn't do it, impossible to mold/cast later, but since this is a V1 prototype, why not.
water-solluble PVA supports worked great this time. I had lots of issues before because filament absorbs moisture too quick if left in the open, which ruins it for printer. 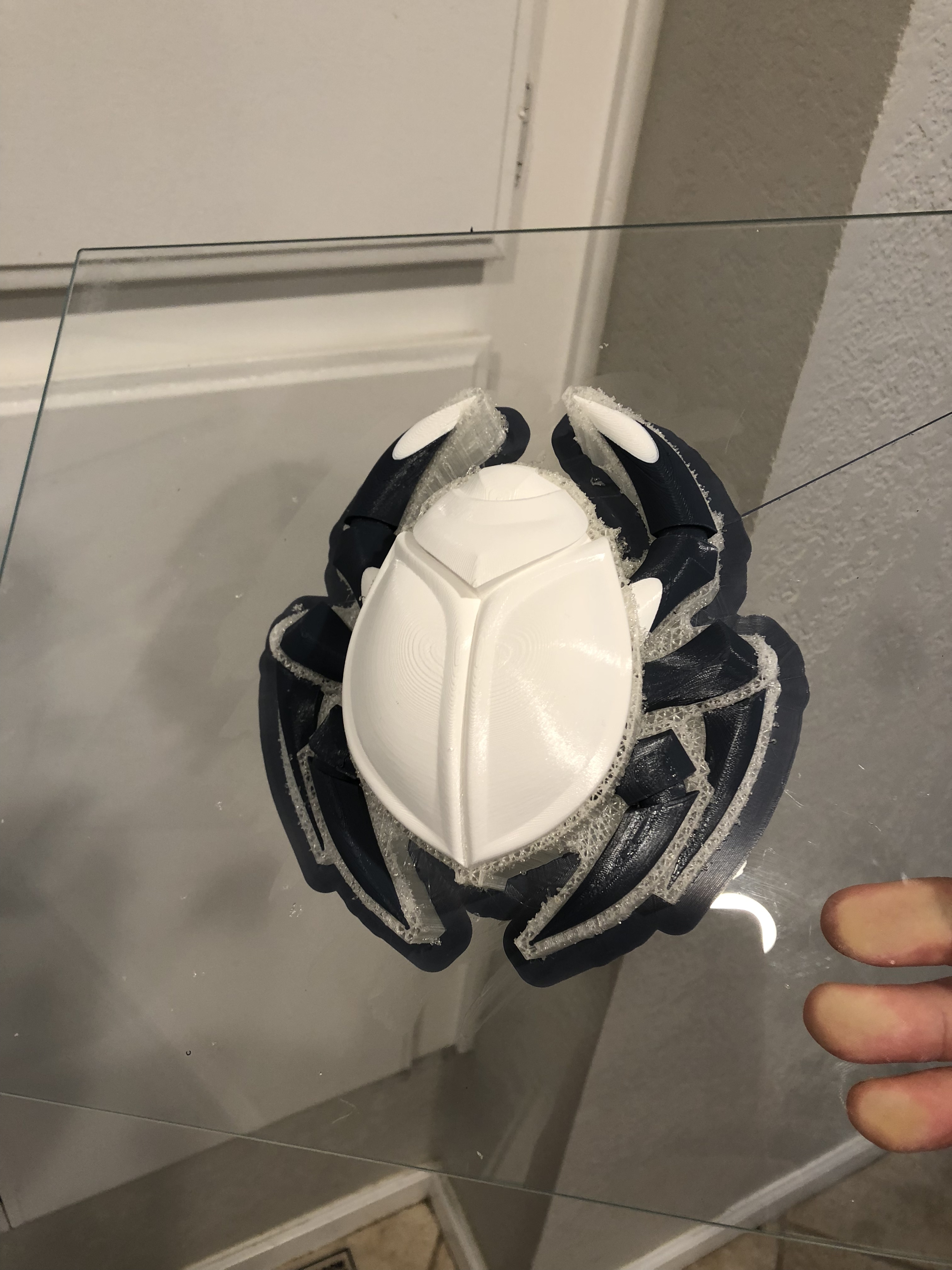 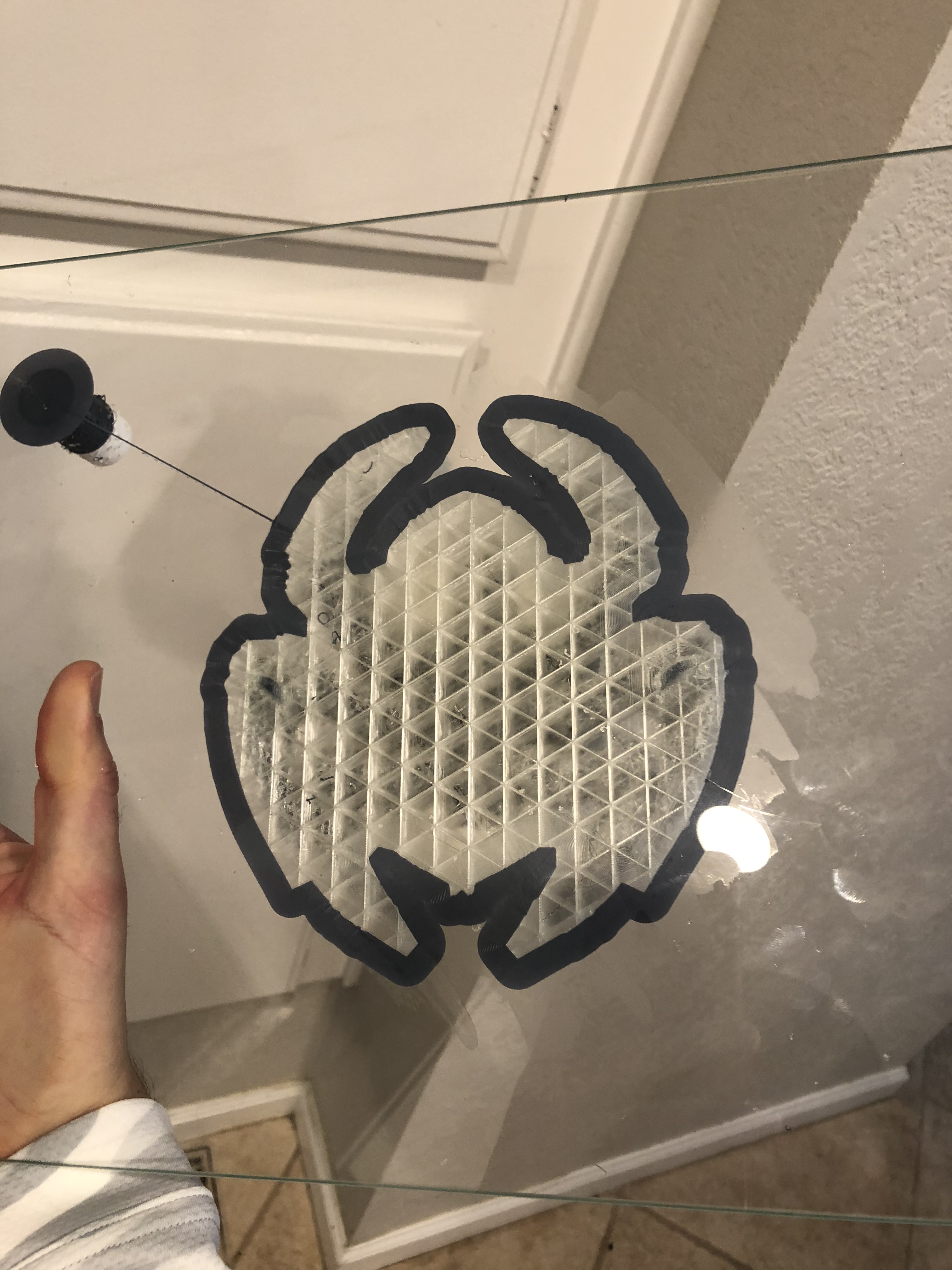 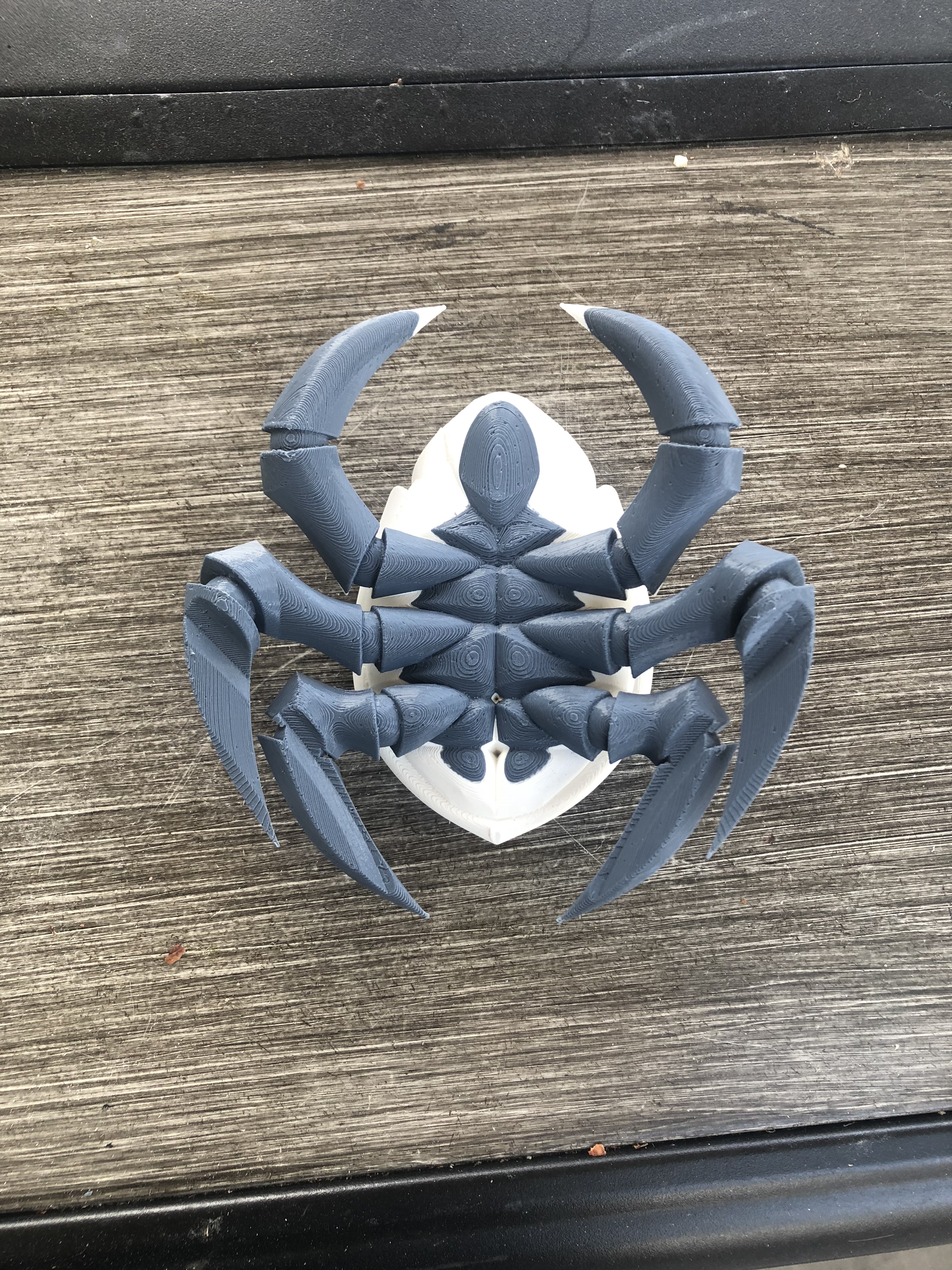 Halfway through ran out of grey PLA/PHA, so had to continue with regular white PLA. Worked suprisingly well. 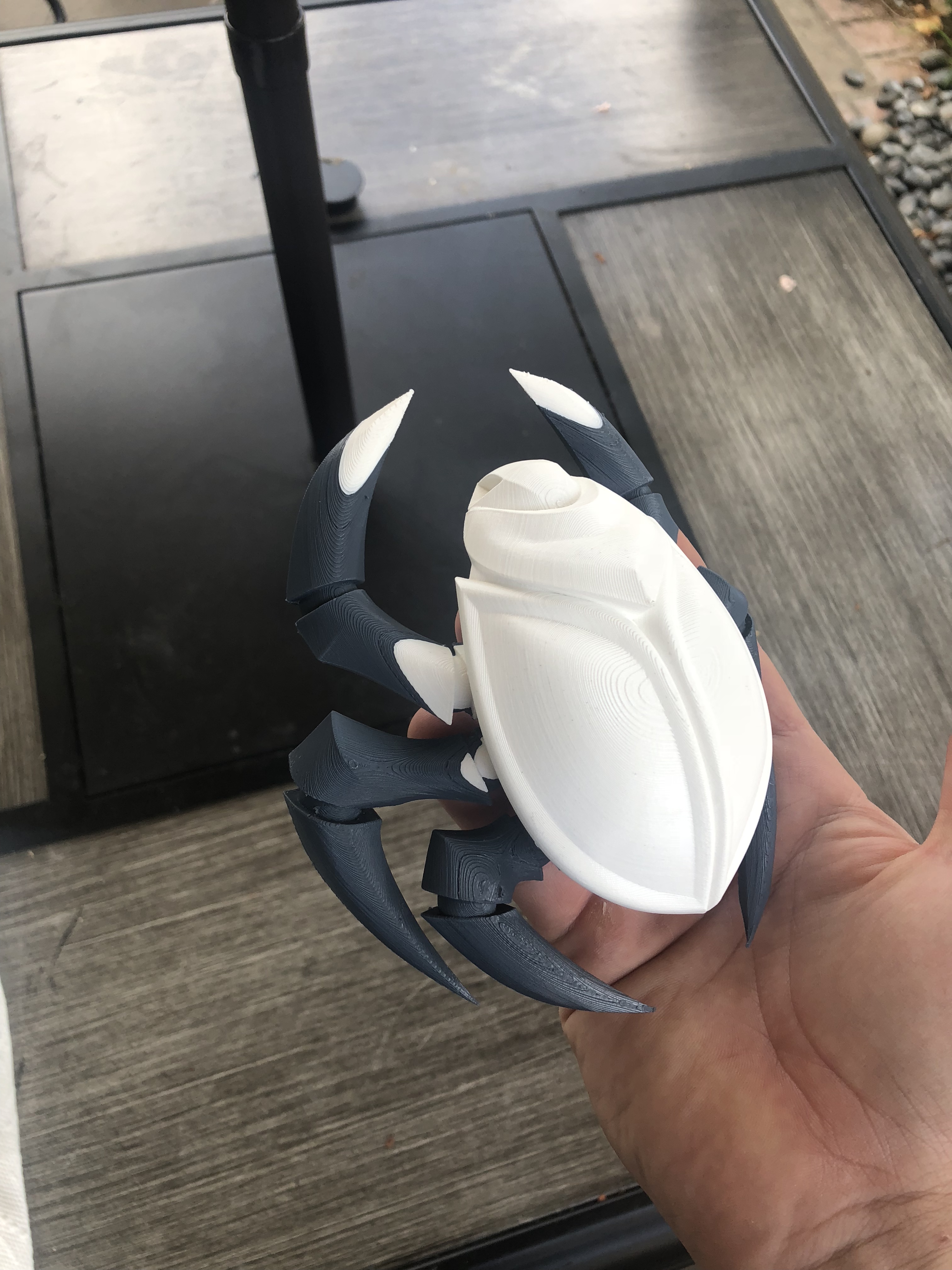 Getting all pieces glued together
Notice huge gaps between parts - this is all from shrinkage warping. Contact area is too small, I had to carefully put more epoxy into cracks hoping it will strengthen the assembly. Hope it holds up, but I am fully aware this thing will not survive the drop. Doesn't matter really since this is a display helmet. 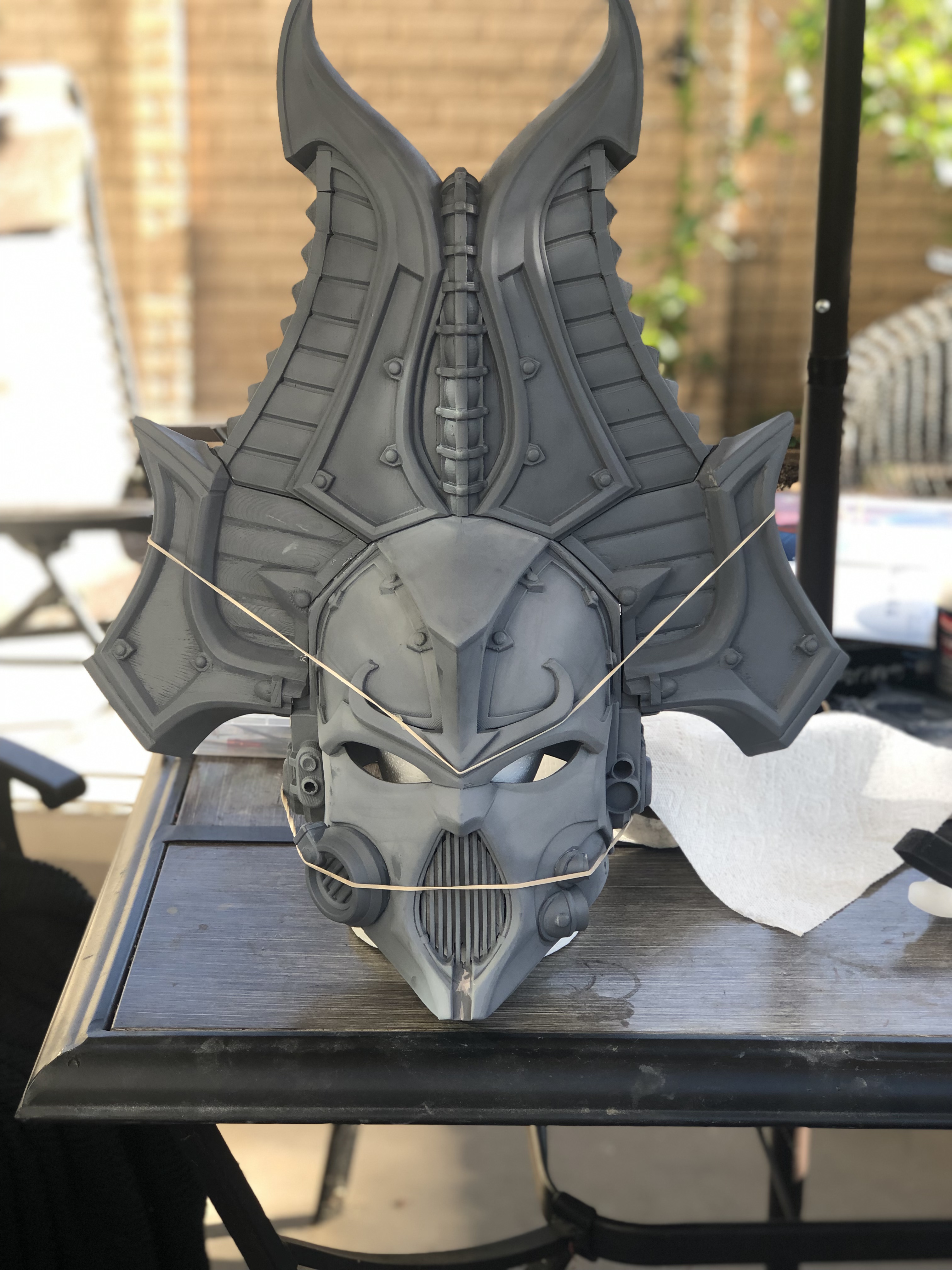 I rushed things a little and glued beetle firmly, now if we wanted to mold this, I don't know if it would be possible to remove it.
But this is first prototype, if we decide to make a proper model later I'll make sure all that can be molded easily.
More priming and sanding. There's traces of layering in hard to reach spots but I hope these won't be as obvious with proper paint job applied. 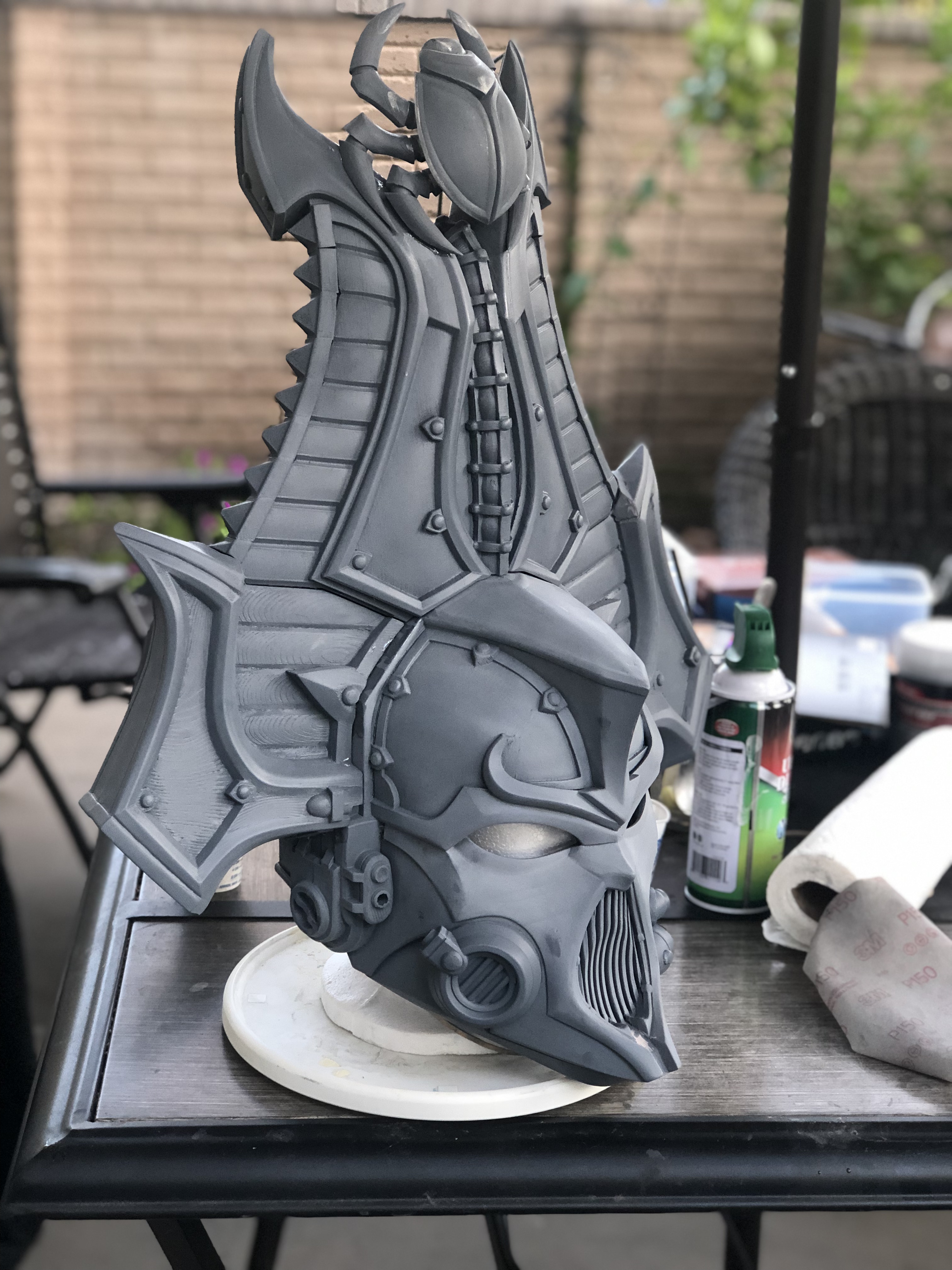 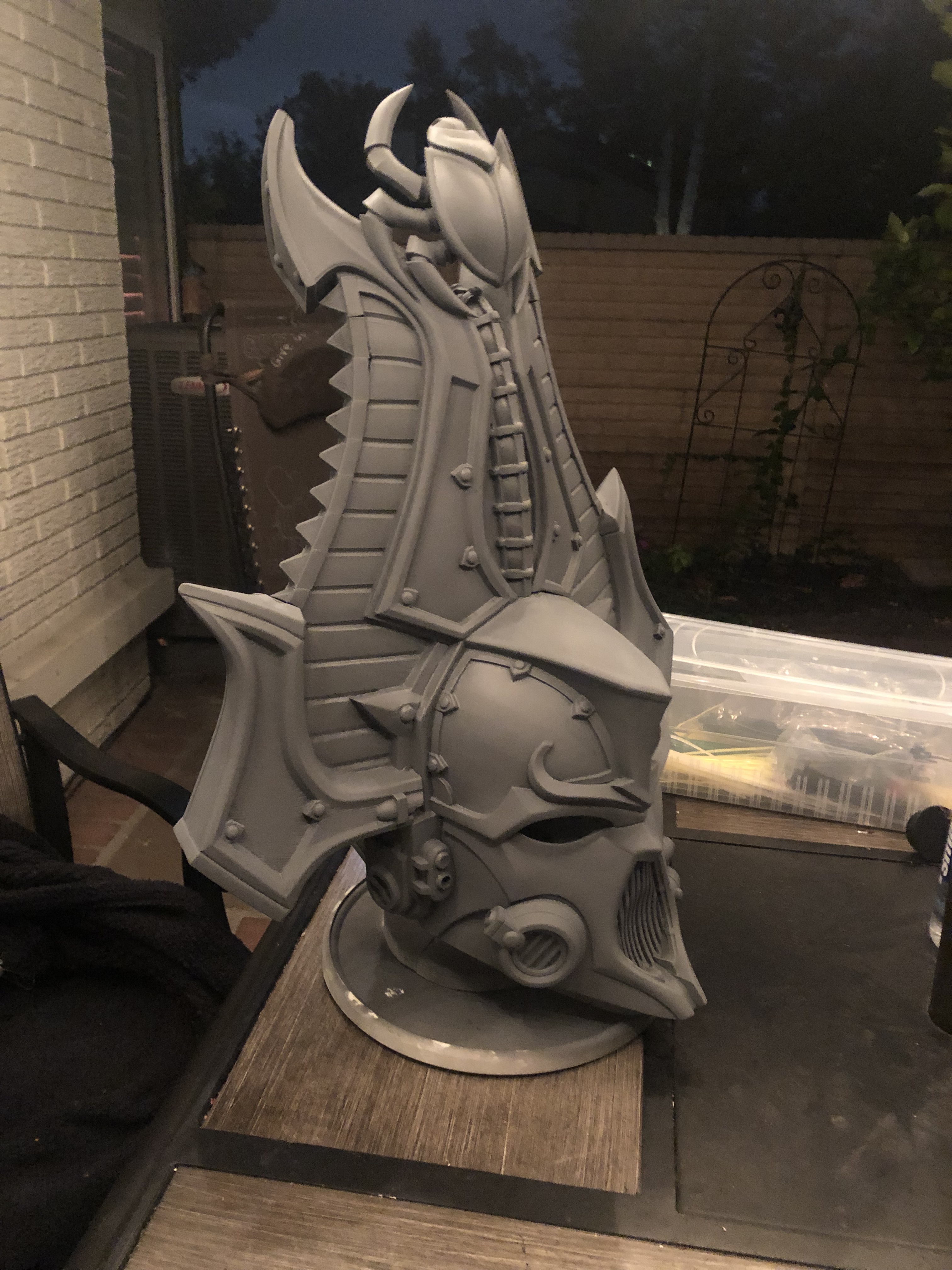 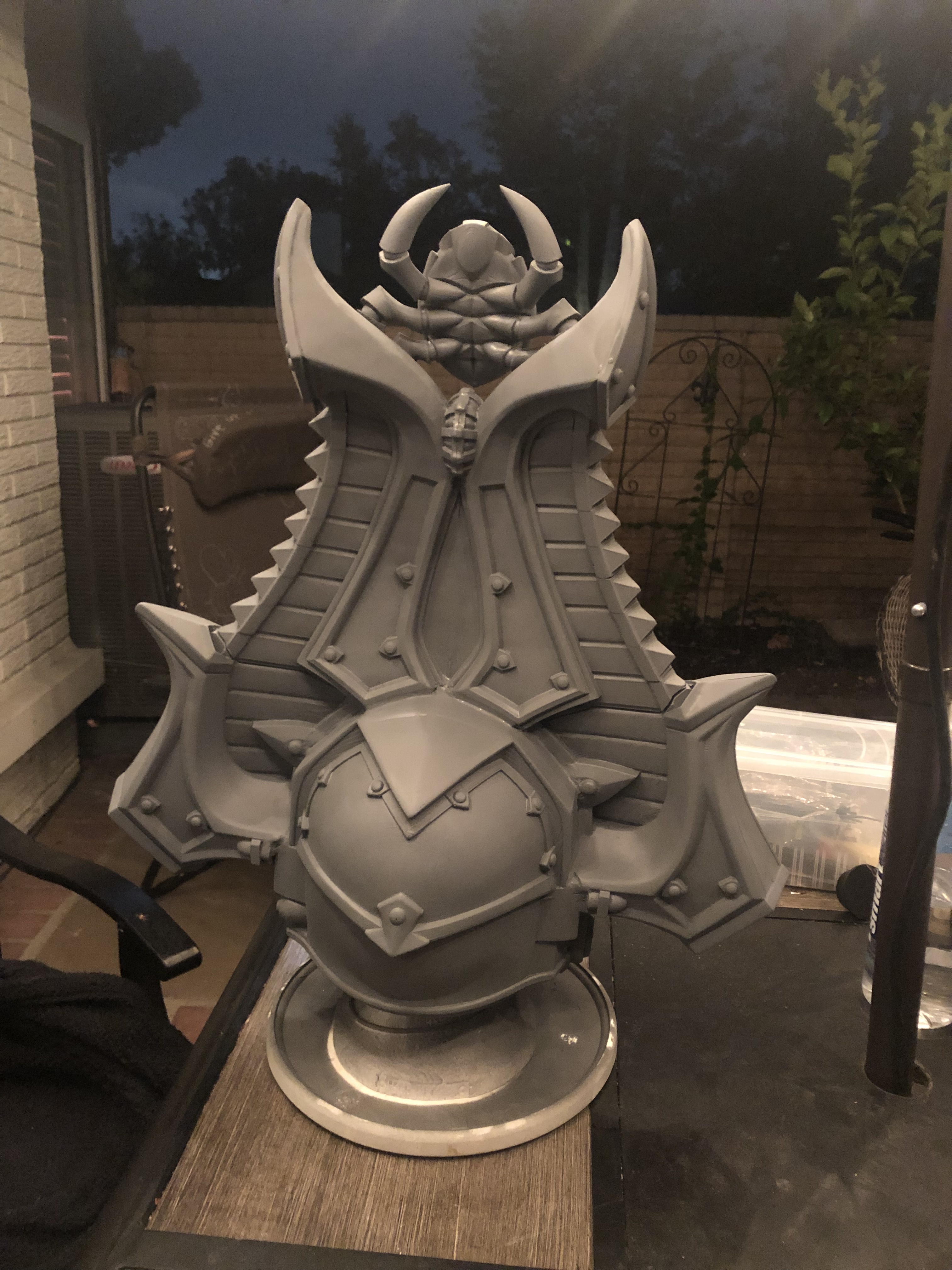 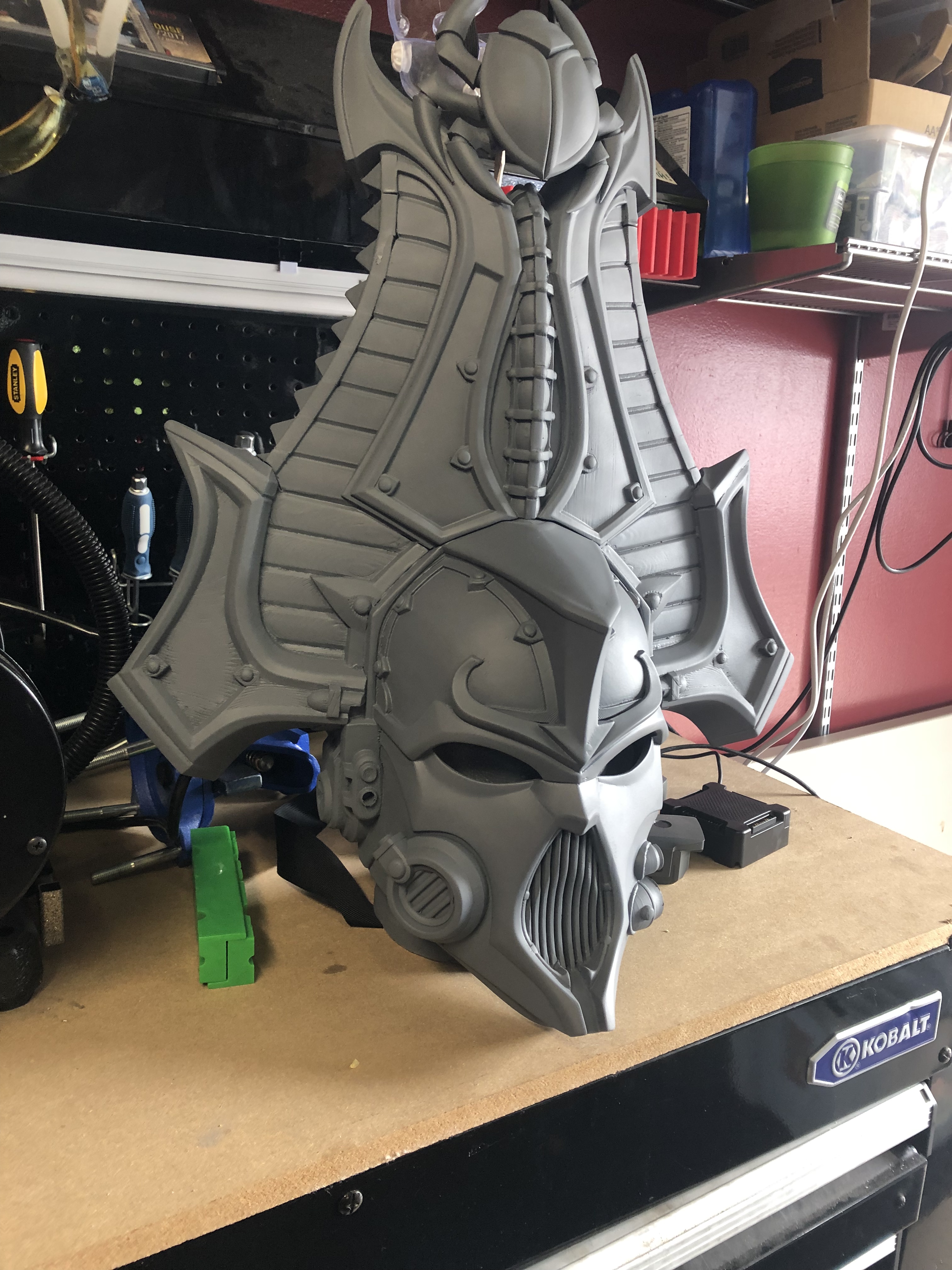 That's it for now, I have more pics and videos taken during production if anybody interested to see them I can maybe share entire gallery.
My wife will be taking over from here, painting this helmet in aged gold / glossy blue combo.
If somebody knows any good videos on painting techniques for similar looking materials, please share, I'd appreciate it

Even though I'm done with this print for now, I plan on revisiting original model for a final polish/details pass and making a better separation that will be easier to print and assemble. Many things are missing on this model which I will add on a final 3D. Hopefully we'll mold and cast some resin kits later this year.

Hope you like it, I'll keep updating this thread with more stuff as we progress.