Aaaaanyways. A good Commissar needs nothing more than a smart peaked cap, a heap of gold braid and- most importantly the Imperial Bolt Pistol.
Anyone familar with the tabletop game, novels or PC games will know that the Bolt Pistol is seriously large and intimidating sidearm- a weapon designed to remind all that cowardice and disobedience will be rewarded with instant, summary, justice....Commissars typically make a 2000ad Judge seem warm and fluffy.

I needed more than JUST a prop Bolt Pistol....I needed a Bolt Pistol I could actually field for airsoft.

Start point: an Chinasoft plastic bodied M4
Why an M4? 2 Key factors (availability and construction)- The front end comes off in one piece as does the stock- that makes conversion easy. Unlike the G36 (another possibility) or G3SAS (another choice) the HOP unit is inside the body, meaning however I decide to build the new body I won't have worry about how to keep it functional.
Plastic bodied for the reason of lightness. I want something I can reasonably use one handed.
So: Hacked the outer barrel and inner barrel down to about 5" (No shorter than the many G&P Tank CQB models). Cut off all the sticking out bits, as we're going for slab-sided. Pull out the cocking handle to save weight. 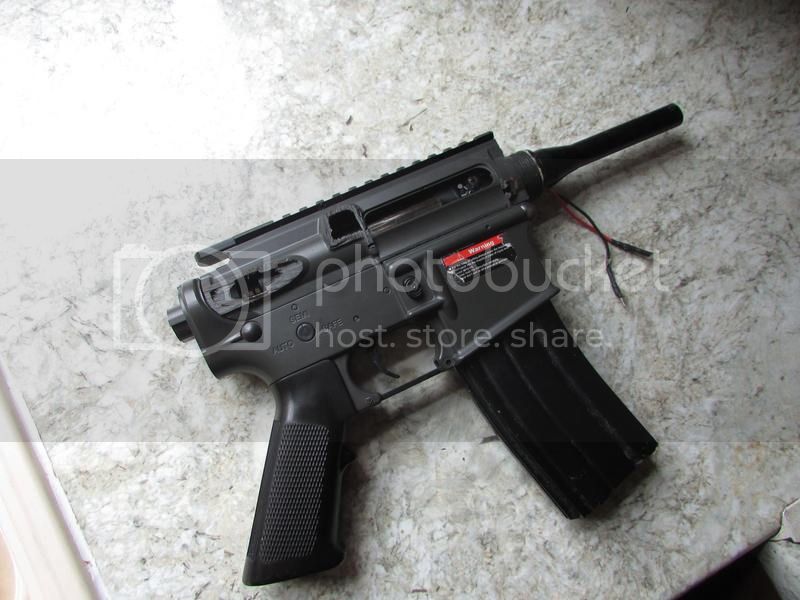 38mm PVC wastepipe becomes the fake bolt-pistol barrel- the real barrel becomes a fake 'gas tube'
To increase the 'chunkiness' factor, I'm adding another length of tube on the top using miliput straight to the top rail. It's also a place to hide a battery. This gives me a solid core to bolt the 'skin' around....This is where the big profile of the bolt pistol pays off.
Added a trigger shoe and funky trigger guard to mask the classic 'M4' profile a little. Cableties are a temporary measure while building. 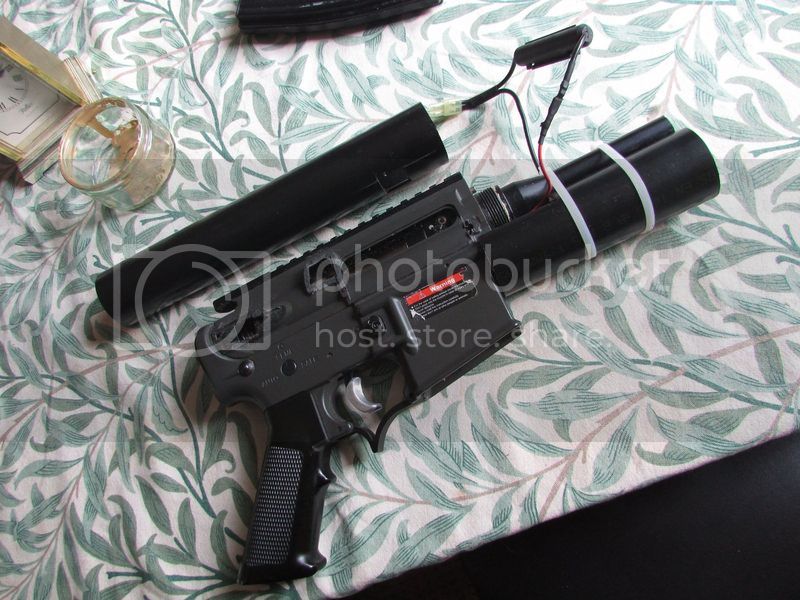 So- Lots going on here.
Body has been fabricated from 5mm matt black acrylic sheet- as with the PVC barrel- my aim is something I can actually LIFT and use all day.
Guts have been sprayed satin silver so that when the 'skin' is bolted on, there's a pretty contrast between the two. 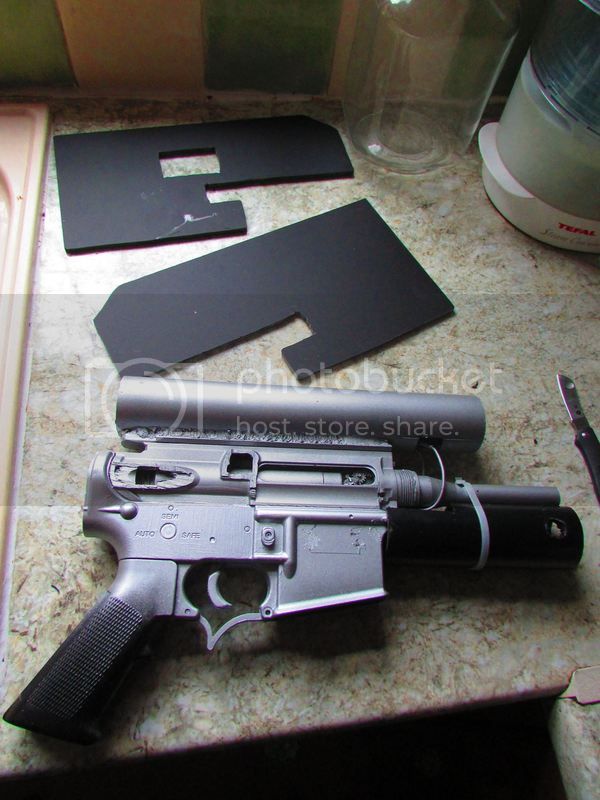 Mocking up stage- waiting for the paint to harden off then glueing in place. Also note I've added a 5mm eye bolt to the rear- this keeps the gearbox supported (no stock bolt) and gives me a locating point for a single point sling....It's screwed into the aluminium of the gearbox, not the plastic of the body.
Means I can hang it on my gear without the faff of having to create holster.....Plus a good Commissar keeps his tool of office ready to dispense justice at all times, so no holster for me. 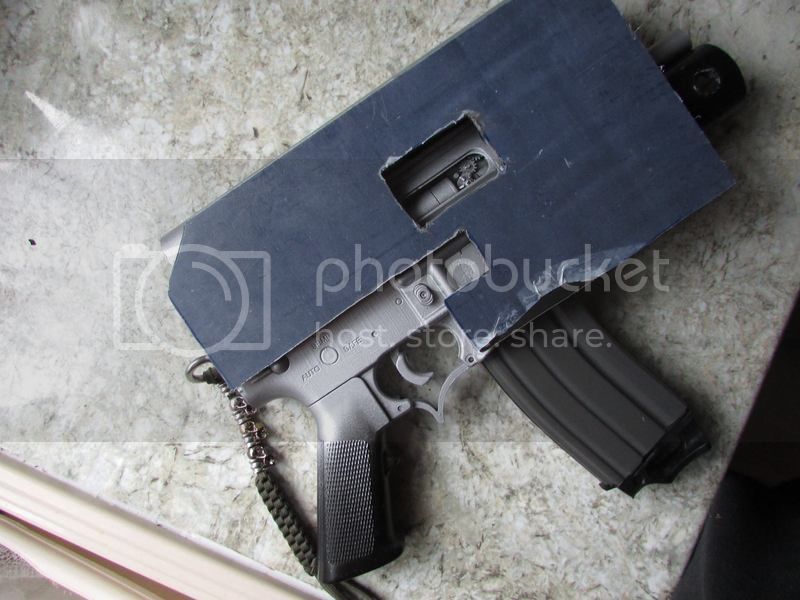 Getting there. Glued in place the side shields- had to create Miliput spacers to keep everything in square.
Grip wrapped in neoprene- this hides the M4 origins a little more.
Weighs about as much as a good target pistol. Manageable with one hand even with a Nimh in place 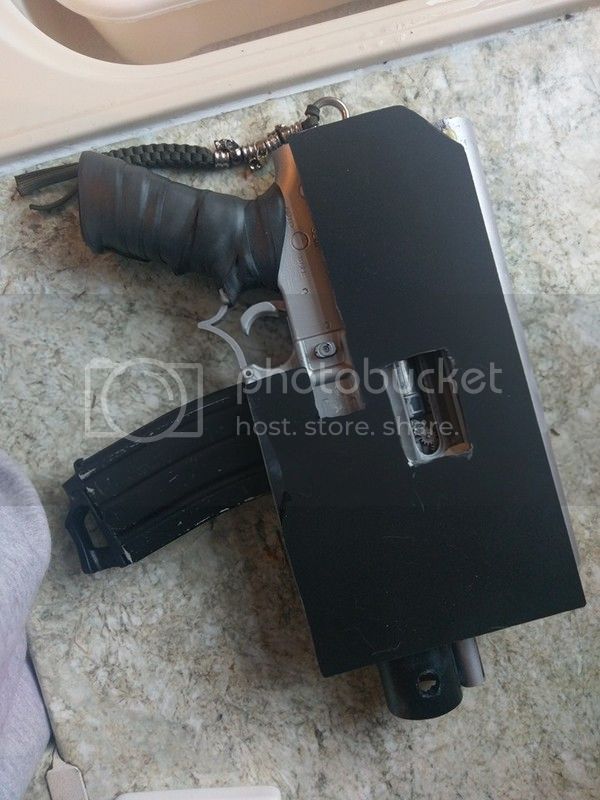 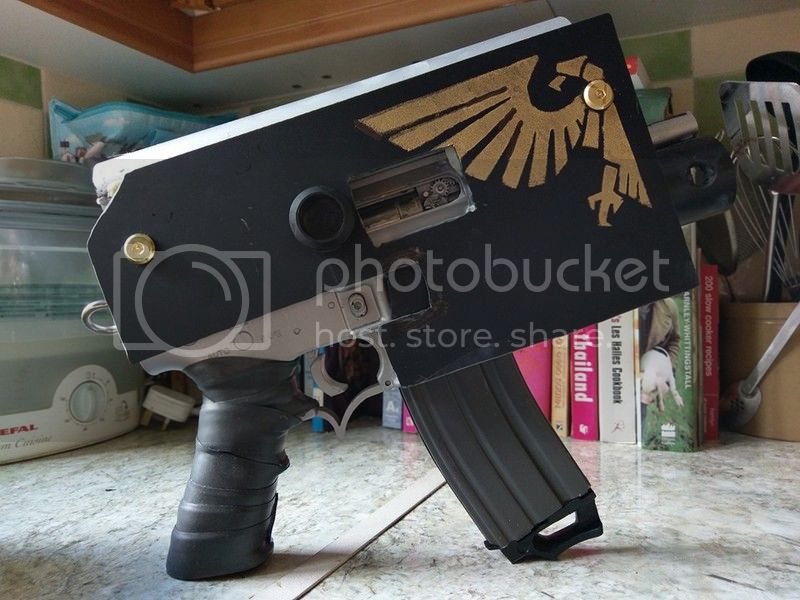 Finishing stage 2
I'm thinking the Bolt pistol is open bolt to aid cooling. Hence cocking handle is back- need to add a little more here to make it look like part of the mechanism 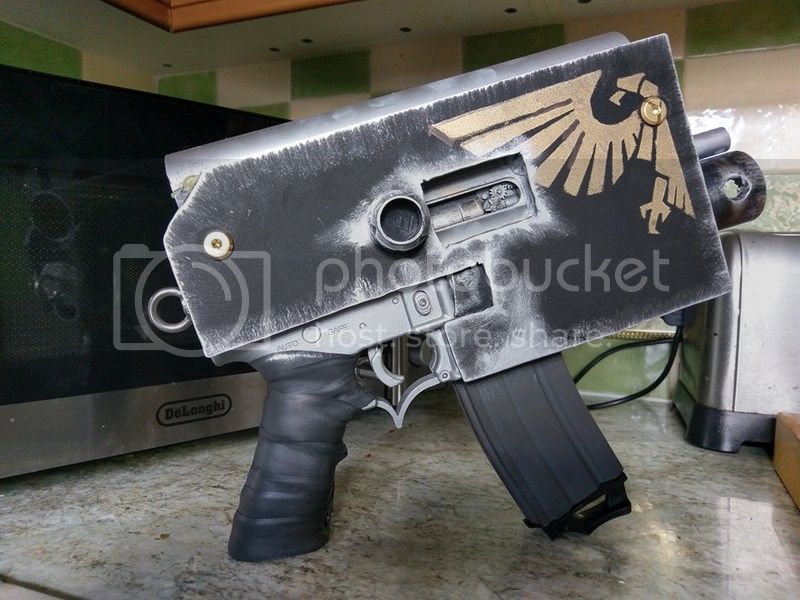 More finishing and tidying to do-
Port side. Some work to do here and at the front....Purity seal needed and a little brass name plate (on it's way ) 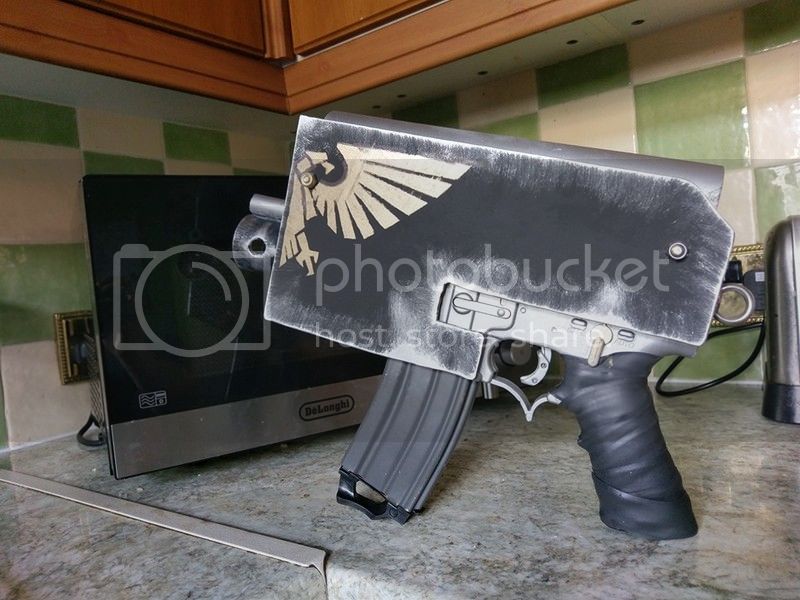 Purity seal/ parking ticket Wip- This produced using the magic of Milliput White and a strong cup of tea for aging the paper. 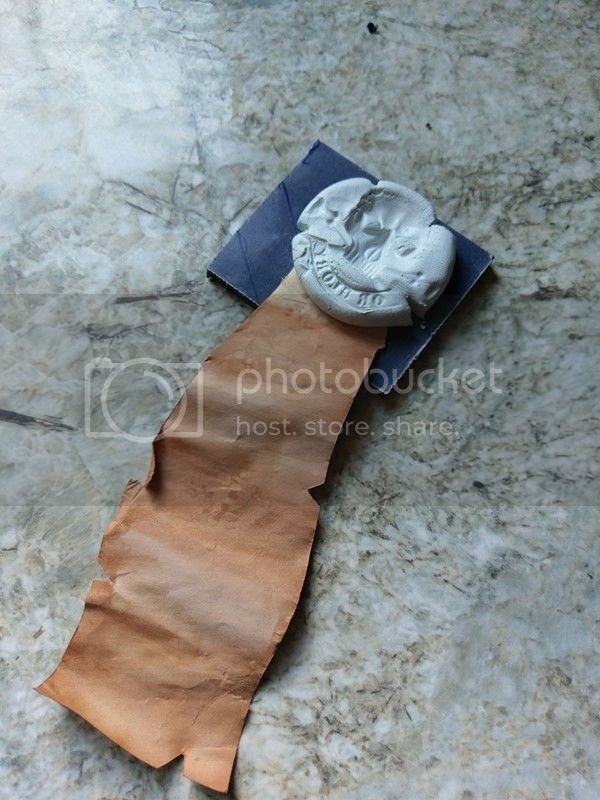 The weirdos in the Mechanicus have purified my tool using magical Purity Seal (Volvo Sunburst Red I had for touching up the car, aged with black boot polish)
(FYI- that'd be NIN Head Like A Hole chorus in Latin in my own fair hand-
"Head like a hole/Black as your soul/I'd rather die than give you control/ Bow down before the one you serve- you're going to get what you deserve").
Converted a pouch and belt buckle for duty too....just need a chainsword now. (watch this space, heretics) 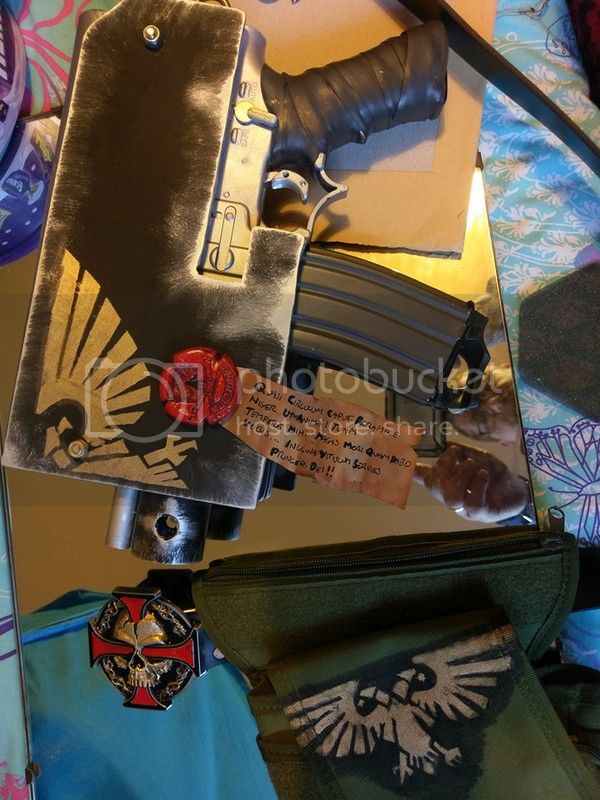 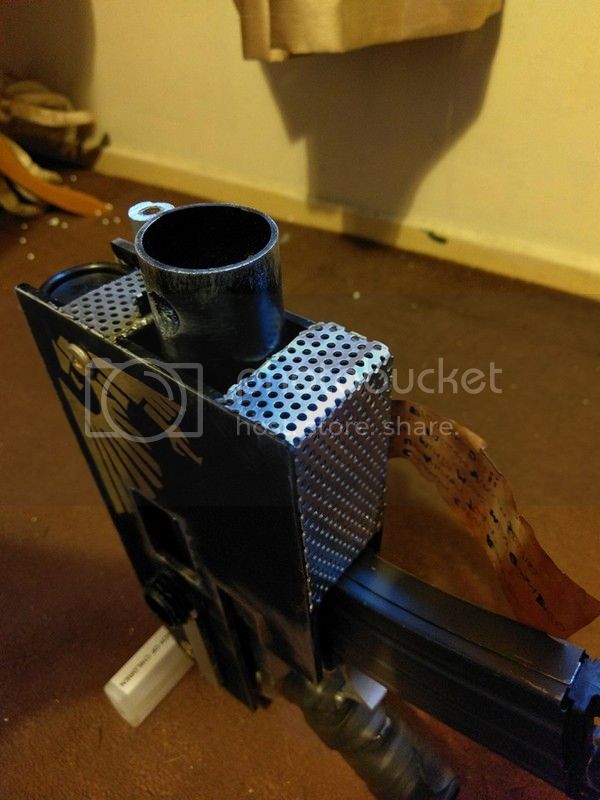 So- got a brass nameplate made on Ebay for a couple of quid and a shotgun bead as a rudimentary sight
And here she is finished: 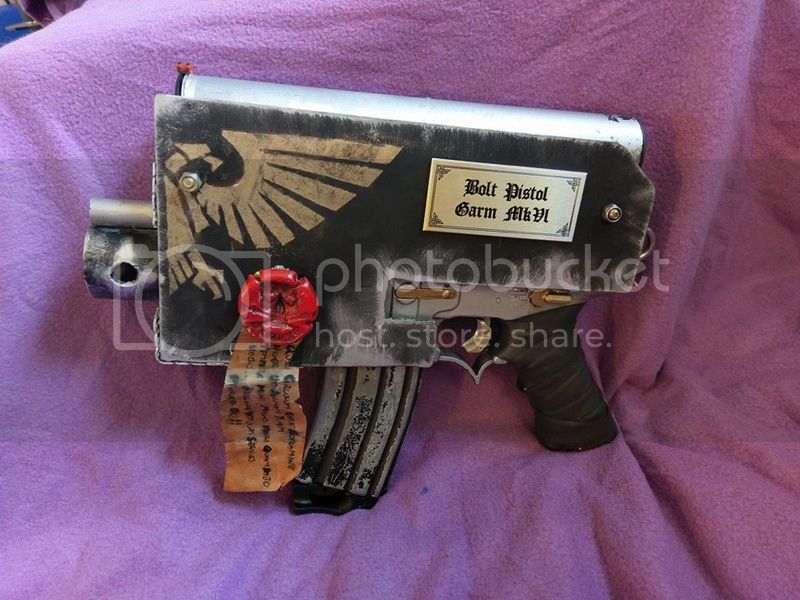 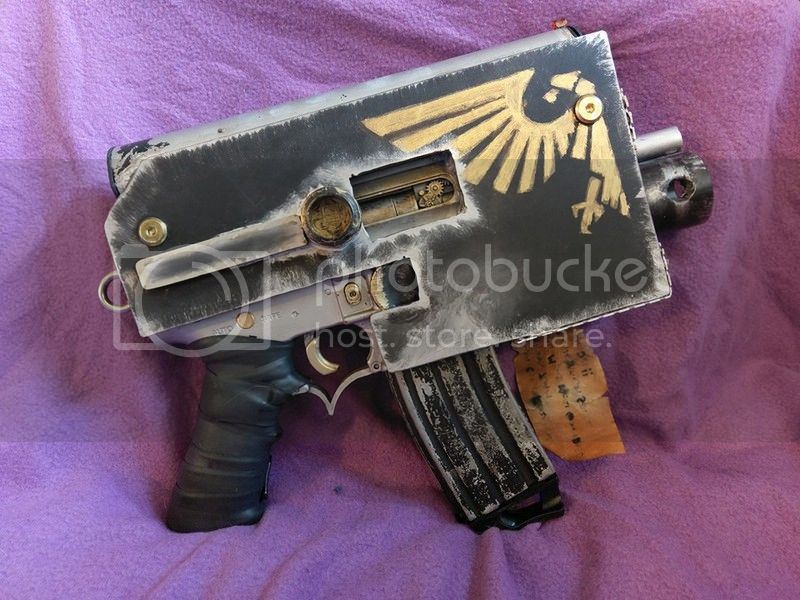 Now I need something to wear-
Had a few beers and hit Ebay: An emo style 'Black Parade' jacket, a Russian Navy peaked cap, a brass Imperial Aquila, some gold braiding for sofa repair, some crimson silk material and a gold curtain tie-back....I also picked up a cheap biker's skull leather belt
- I painted the black braid gold on the jacket over the space of 3 nights
- My lady-wife sewed up a set of epaullettes for the jacket using the red material and gold braid- she also added the red hatband for me.
- I added a gold curtain tie-back by looping it under the epaullette button.
I got drunker and ordered a cheap crimson silk pashmina to use as a sash and- the final but most expensive bit- a foam LARP grade chainsword (and it's lovely)
Here's a friendly public service announcement from me- your newly appointed regimental Commissar....I have become my own meme. 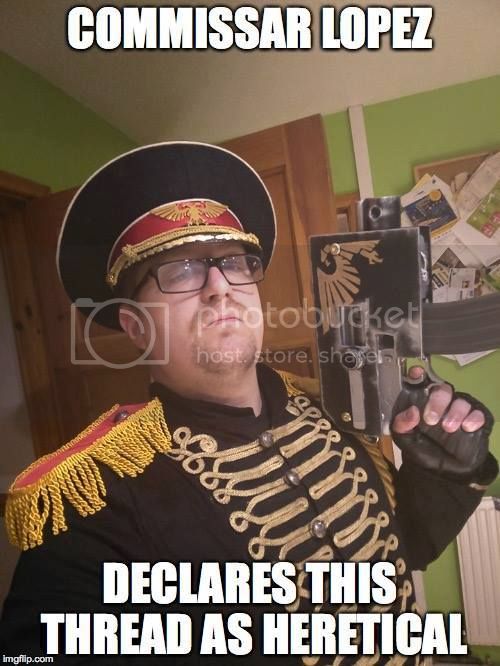 For field use- I added black jungle boots, black TDU trousers and some fingerless Oakley copies....Final touche: an Alpenflage camo poncho to use as my Tanith First pattern 'stealth cape'. The cheap and nasty Chinese drop leg pouch is for holding spare mags 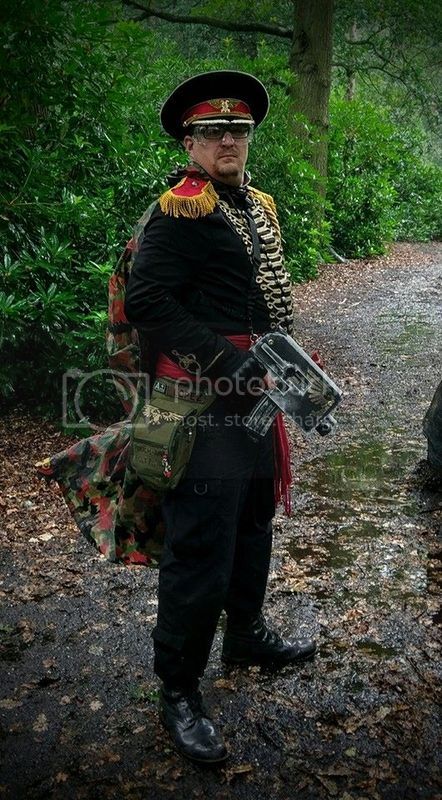 The Commissar is watching 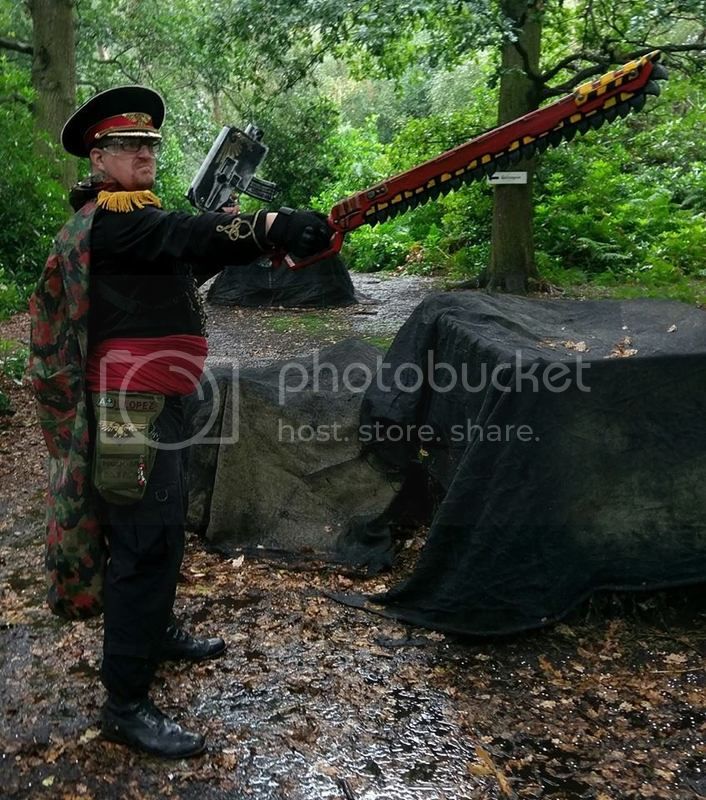 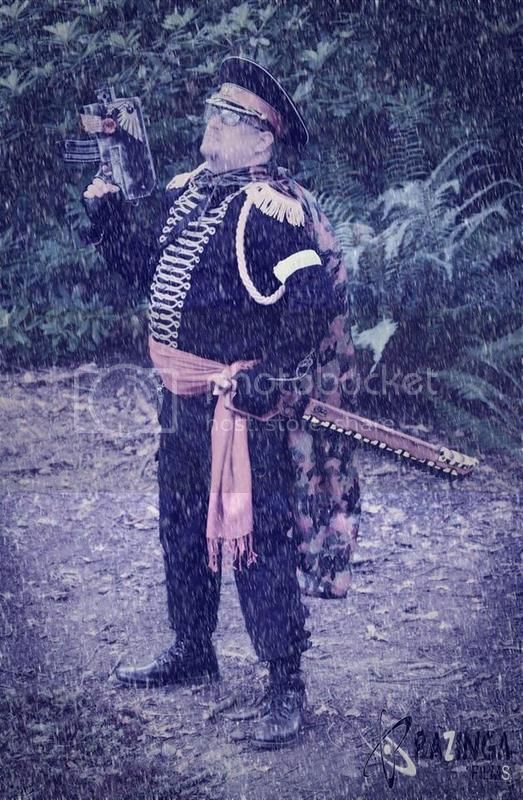 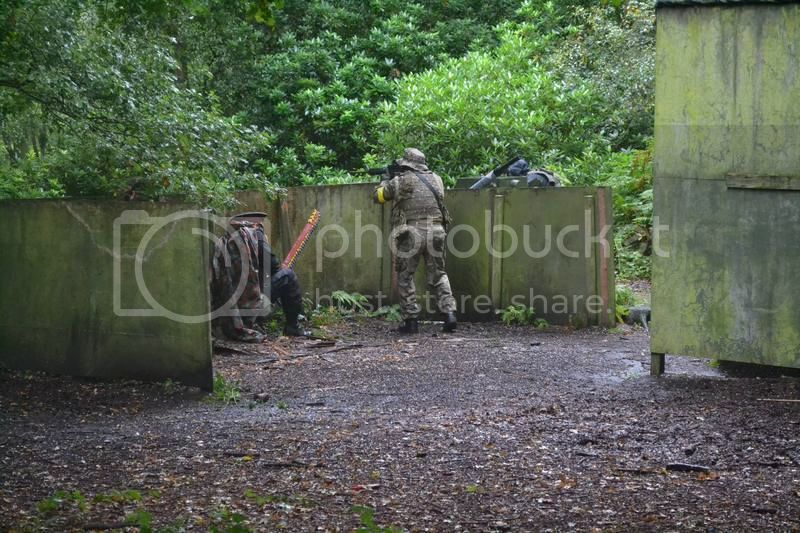 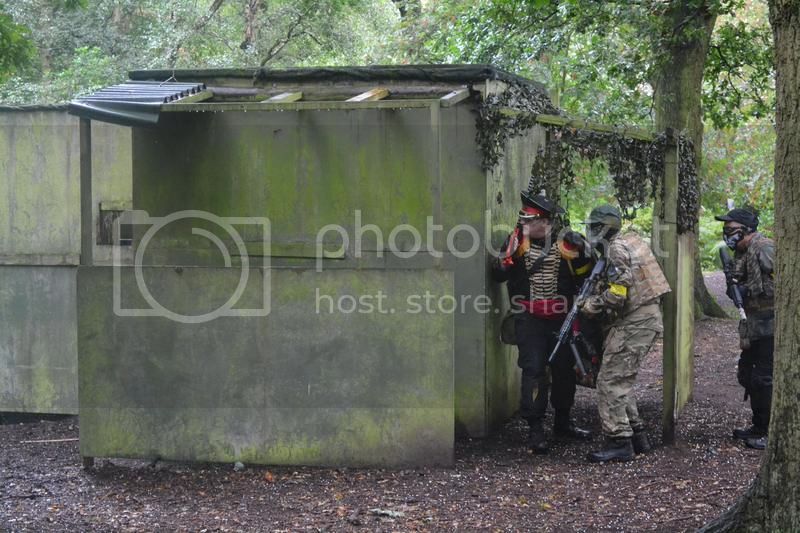 The Expanse: an Amos-Style Jumpsuit