Spent a while researching and was hoping to get some feedback. I'd like an accurate finished piece or kit. I saw that a project began 3 years ago but has now closed for an all metal version. I found models-props.com, but read the thread about that, so... NO. Then saw a build thread on the kit from Tip Top Workshop. That's where I'm thinking of buying, but should I consider anyone else? I also searched for methods of recreating the carbon fiber pattern on the grip, but didn't find much. Can anyone link to tutorials on that? Thanx.

RPF PREMIUM MEMBER
I thought this was a really well-done tutorial for the grips:

No, I had not seen that. That's why I'm asking, thanks.

The 48th Ronin said:
I thought this was a really well-done tutorial for the grips:

The taping takes time but is worth getting right. For the silver stages I used a light dusting of AK Interactive's 'steel' and 'aluminium' Xtreme Metal paints to give me a slightly different shade of silver for each alternating 'weave'.

Where the tutorial calls for the black laquer I subsituted instead Tamiya 'smoke', airbrushed on three thin coats, before finishing with three or four coats of Rustoleum 'gloss crystal clear', with the final coat going on pretty wet (but still light enough to avoid the dreaded runs!).

The final result looks perfect, I think (the photos below are a bit misleading - it looks a lot darker in person). The rest of the gun is mostly satin black with silver Rub'n'Buff weathering. The barrel is a glossier black with a Nato Black grilles.

My blaster, by the way, is the rgriesbeck printed blaster referenced in stussy 's post above, with some minor modifications (see here). It's a fantastic kit. I was never 100% happy with my original painting, thinking it didn't do the kit justice, hence the repaint!

The 48th Ronin said:
I thought this was a really well-done tutorial for the grips:

I have one of Andy's finished K Blasters. Finish is great, and matches the metal of the sidkit very well. If you want to buy a finished replica off Andy, you can't go wrong.

I have a few finished blasters from Andy (flyscriber) also. A photo of two them is below. They’re beauties. He chromes them before painting them for a real metal effect. If you’re interested in a finished piece, I’d recommend reaching out to him. Note that he handled the electronics for both blasters also.

Btw, the top blaster was assembled from a 3D printed resin kit by joatrash fx. His blaster used solenoid magnets to replicate the trigger mechanism of the screen used model Plus it has LEDs for the trigger guard. That run was complete over a year or two ago, but it was the only one on theRPF that provided full functionality like the screen used model. It is really nice. You could do a wtb post asking if any members are willing to part with their kit. Btw, if any part of the blaster looks wonky, its not because of joatrash or flyscriber. Rather, it’s because customs damaged it badly during transit, and I had to locate replacement parts and fix the damage. And my model making skills are nowhere near Andy’s skills.
The lower blaster might be from tiptop workshop. I believe it’s a cleaned up resin model, so no print lines to clean up. This one has LEDs in the trigger guard. 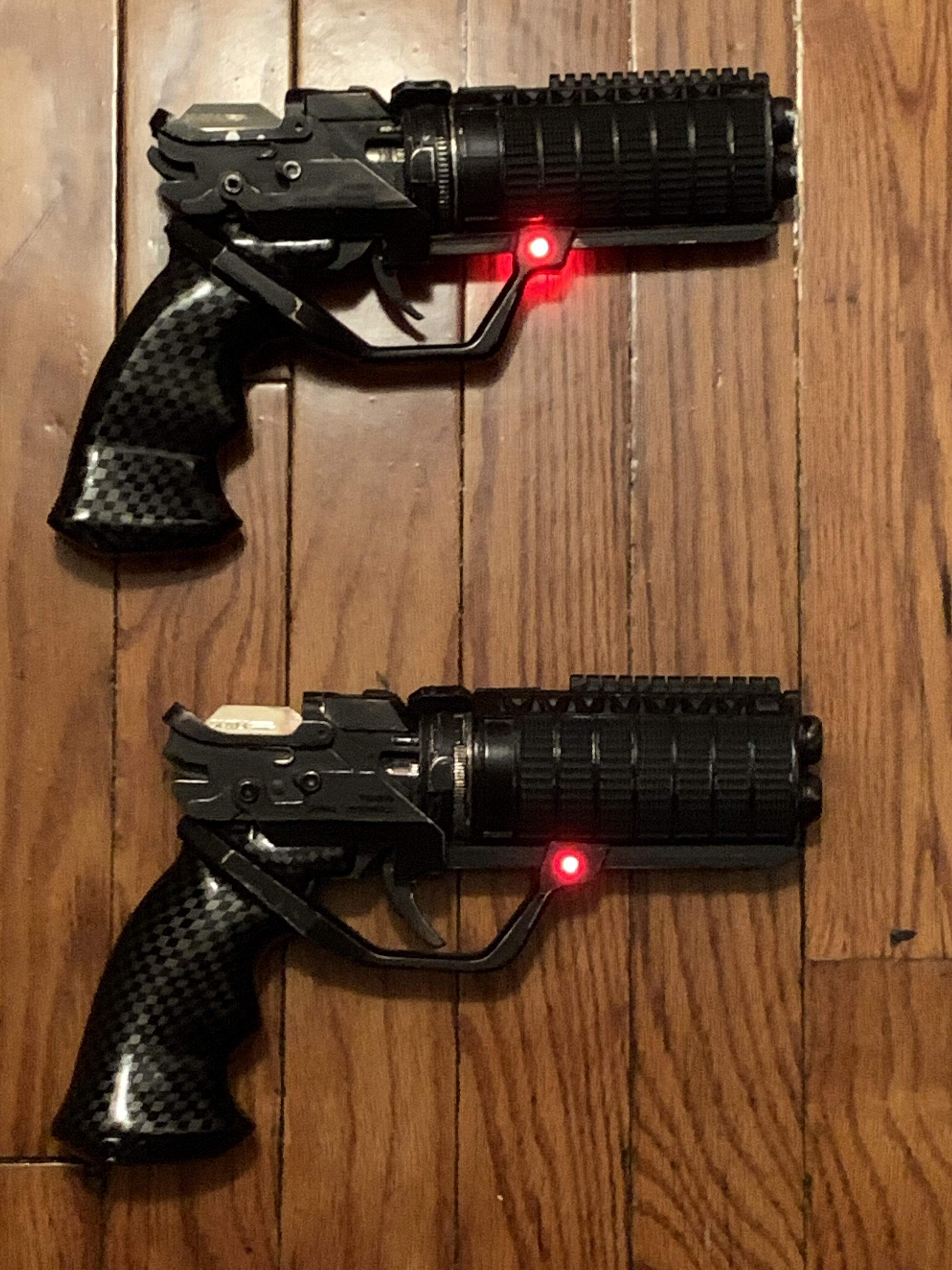 I have a few from tiptop and love the quality of their work. Really lovely quality casts.

So, I'm back where I started. Not sure which to buy. Anyone care to offer an opinion of rgriesbeck vs. Tip Top Workshop? To my eye they look very similar. Both have great detail and offer lighting.

RPF PREMIUM MEMBER
Here's my TipTop Workshop blaster - and my first prop - handle needs some re-work but a good kit with some weight to it.

jheilman said:
So, I'm back where I started. Not sure which to buy. Anyone care to offer an opinion of rgriesbeck vs. Tip Top Workshop? To my eye they look very similar. Both have great detail and offer lighting.
Click to expand...

I will always choose resin over 3-D print. (I haven’t dealt with 3-D printed resin yet)
The well made resin kits offer higher quality detail with less prep work. The 3-D kits require a ton of sanding and can rarely be made to feel real.
I like to replace as much of a kit as I can with metal and resin is much easier to do that with. You can cut parts off and secure new ones far better than a 3-D kit.
if you’re just looking for a shelf decoration, here’s my rgriesbeck Samaritan. It looks good and feels pretty good after I added weight and the wooden grips. 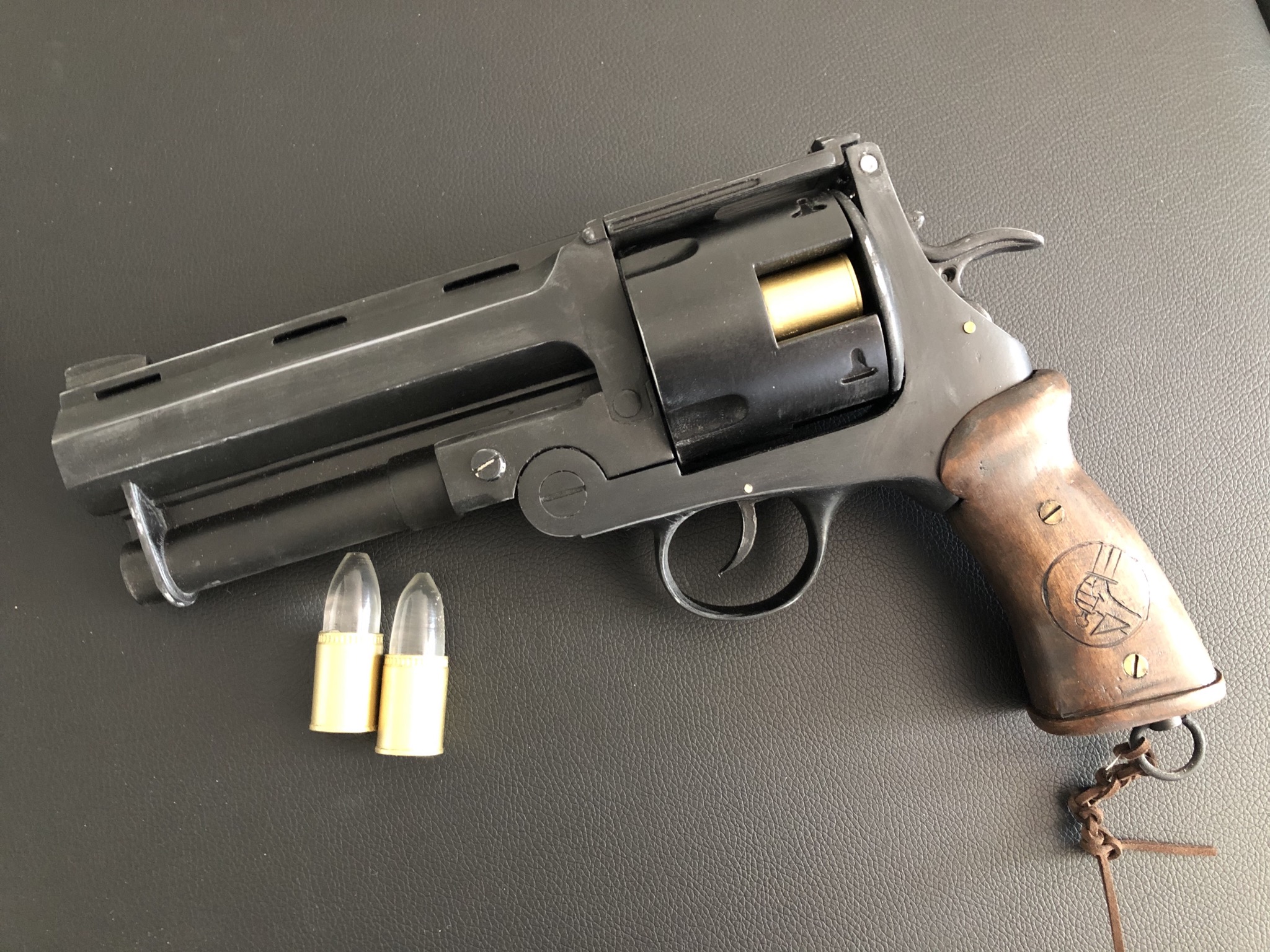 And my rgriesbeck K’s blaster. But this was my first 3-D kit and I’ve not gotten around to doing the grip right.

Either way you’ll get a good looking kit, but I like to work with resin far more.

I have the Tip Top kits for Luv’s blaster and K’s now and I’m working on both. My plan is to hydro dip the carbon fibre handle on K’s.
Good luck.
Tom
Last edited: Yesterday at 8:43 PM

How to learn Metal Smithing

Yesterday at 1:56 PM
antigravity
A

Yesterday at 4:12 AM
airhead