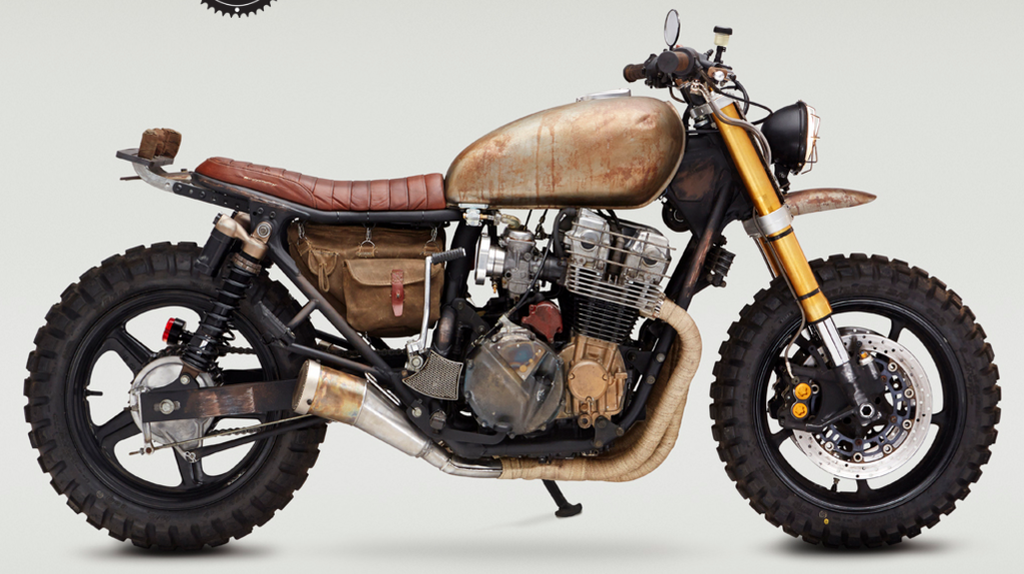 Ever since I first saw this bike I was infatuated with it. I had never really been a fan of Cafe Racer style bikes, but this one had me. I immediately started searching for any info at all on the bike, its origins, what bike it was, etc. Luckily Classified Moto had a vague build sheet posted on their site with the parts used. It's main components essentially break down to 3 different bikes:

First purchase: 1992 Nighthawk 750 with 9k miles on it. I searched for months to find the right bike, limiting my search to only the 1992 model as to keep it as close as possible. I eventually lucked out with this one that I found in Orlando. The guy said the bike hasn't run in about a month, my guess, the carbs needed cleaning. I met up with him to inspect the bike, front turn signals were broken, it had been in a front end accident, it had an aftermarket exhaust, and of course it didn't run. We attempted to start the bike there, but no luck. After much deliberation, I decided I could get over the flaws since all of that stuff was getting replaced anyway. But I couldn't pay his asking price of $1500. I talked him down to $1300 and I was on my way. 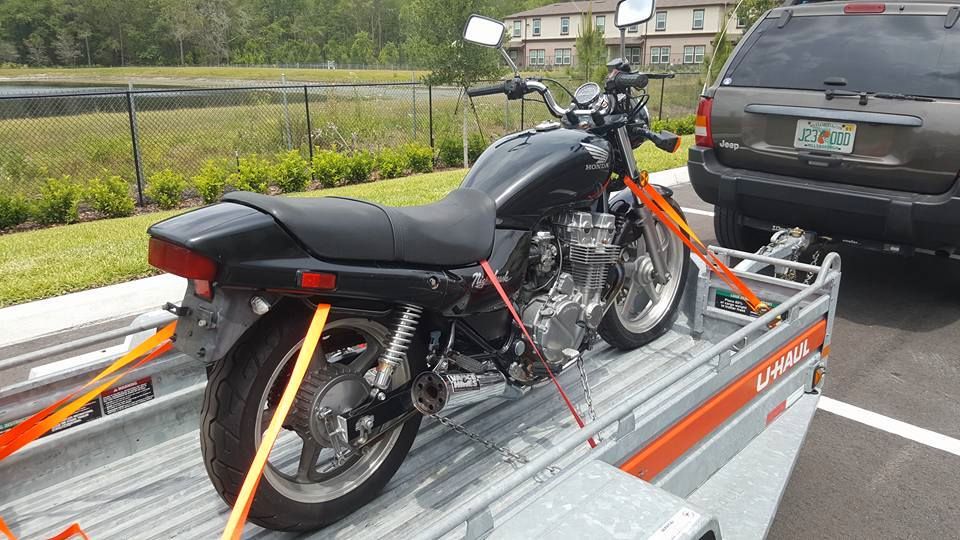 Getting the bike home was easy enough, unloaded the trailer, rolled the bike into the garage, and turned in for the night. The next morning I had a hunch. Before I took off the carbs to clean them, I decided to try and start the bike again. I played with the choke while holding down the starter and about 15 seconds later she fired right up. I let it run for about 10 mins and then took it for a spin around the block. She was still a little backup up, but after a quick zip down the highway, she cleared her throat and was as good as new.

Second Purchase: The exhaust. One of my requirements for buying the bike was that it had to have the stock exhaust on it. Well, the 92's that I didn't find with the stock exhaust either had very high mileage, or the asking price was well over $2k. So I hit up eBay. I was watching an auction that ended pretty much the same time I met up with the guy to buy the bike, they were asking $150 with free shipping. Considering the size and weight, this was a deal. It had been relisted a few times before, so I was confident nobody would buy it. I couldn't bid on it yet since I didn't know if I was going to buy the bike or not, so I took the chance. Of course, as luck would have it, I missed the end of the auction by about 15 mins. It ended without being sold. So I contacted the seller asking if he was going to relist, he was a total dick and said I should have bid on it when I had the chance and that he sold it. This was a little confusing since there were no bids and it said it didn't sell. But, the fates were on my side that day. I found another one that was listed for $300 with free shipping. It was more damaged than the first, but the damaged areas were on the part that gets cut off anyway. This auction had a "Make Offer" button though. I started low and offered the guy $100 with free shipping, he countered with $200, and we settled on $150 with free shipping. Score. So here is it: 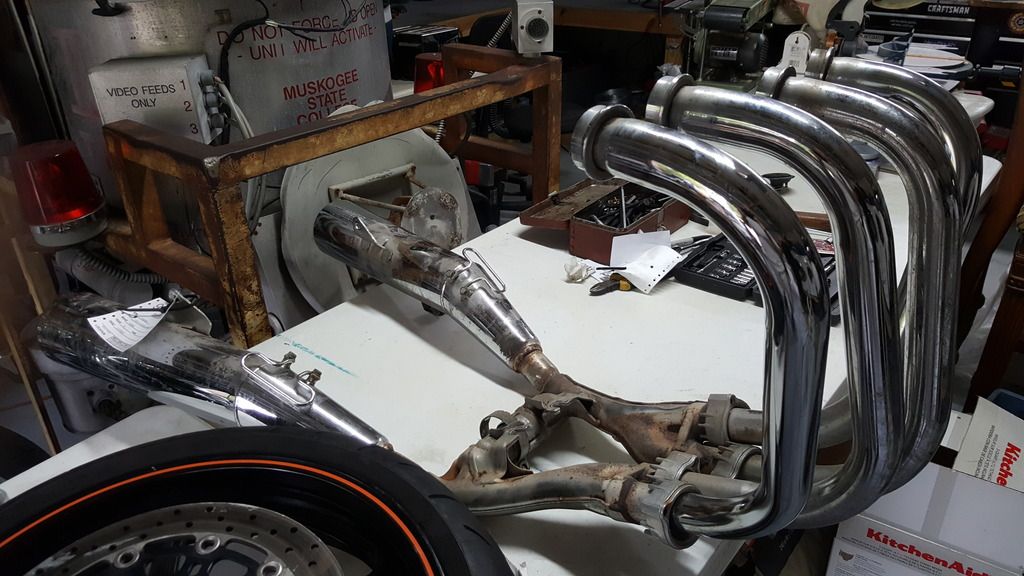 Third Purchase: The R6 front end. I searched tirelessly for this, trying to find out the year bike it came from. Apparently there were a couple of gold fork years that arent compatible with others but it didn't take long to find out that the front end was from an 2008-2014 YZF-R6 with gold dot calipers. I saw some on ebay, but none were complete. It was either missing the wheel, the calipers, or the controls. I noticed though that some of the listings were from a shop that was close to me. I emailed the guy with my parts list and he said he had pretty much everything I needed, minus the calipers. I ended up getting the front wheel, brake discs, forks, trees, stem, and controls for $1k. The downside was that it was missing the front axle and calipers. I managed to pick those up on eBay for $20 and $100 respectively. I am currently waiting on those to arrive. My haul so far: 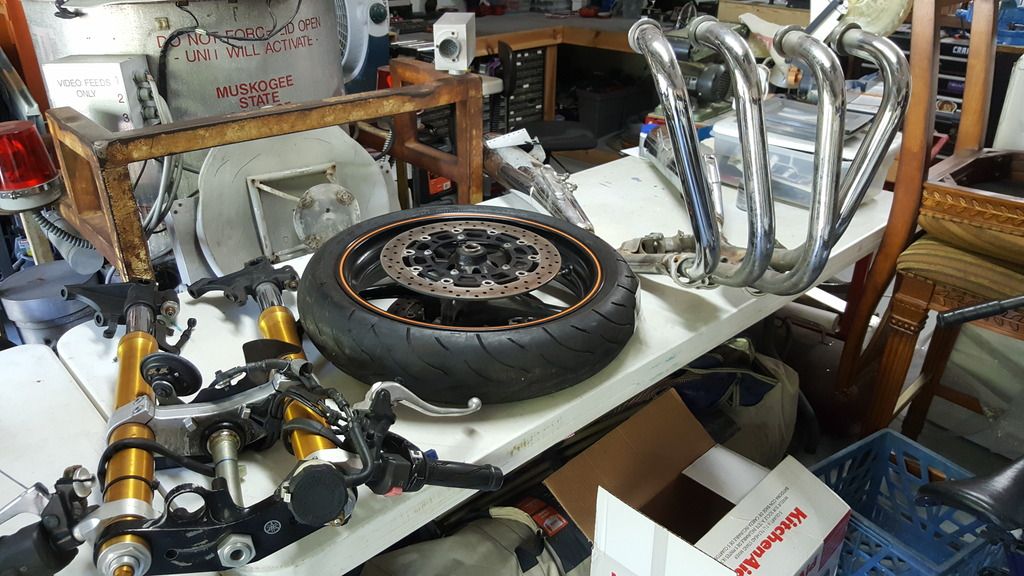 Fourth Purchase: The exhaust wrap and ties. For a while I couldn't determine the color of the damn wrap. In some pictures it looked titanium, and some pictures looked tan. Ultimately, I settled on the tan and ordered 50' roll on eBay for $30. In the reference photos it looked like 2" wrap, and based on the color it looked like DEI. There were some cheaper rolls on there, but hearing the horror stories of cheap exhaust wrap on the bike forums, I opted for the name brand. 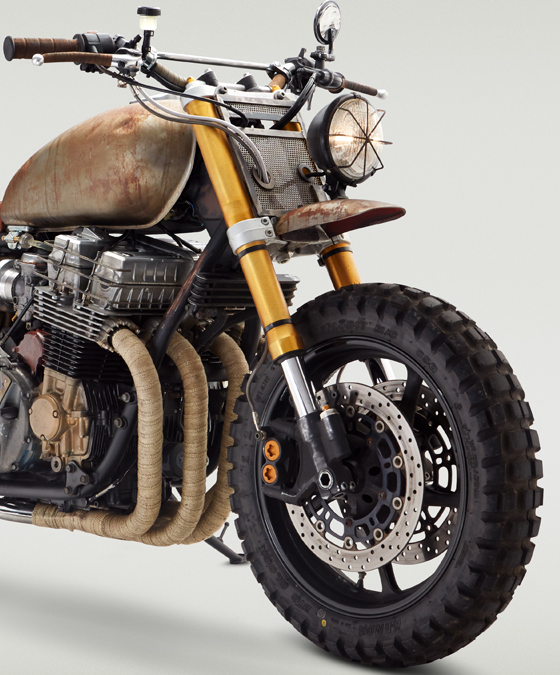 Fifth Purchase: The handlebars. Classified Moto was kind enough to put SE CR Hi as the handlebars on the page..... At first glance, I was like WTF does that mean?? So I googled it, it stands for Seven Eighths diameter with a CR Hi bend. The bars are made by Pro Taper. So eBay once again, but next came the color choice...black or titanium? After showing everyone I could, we all came to the conclusion that it was titanium based on this shot. These ran $63. 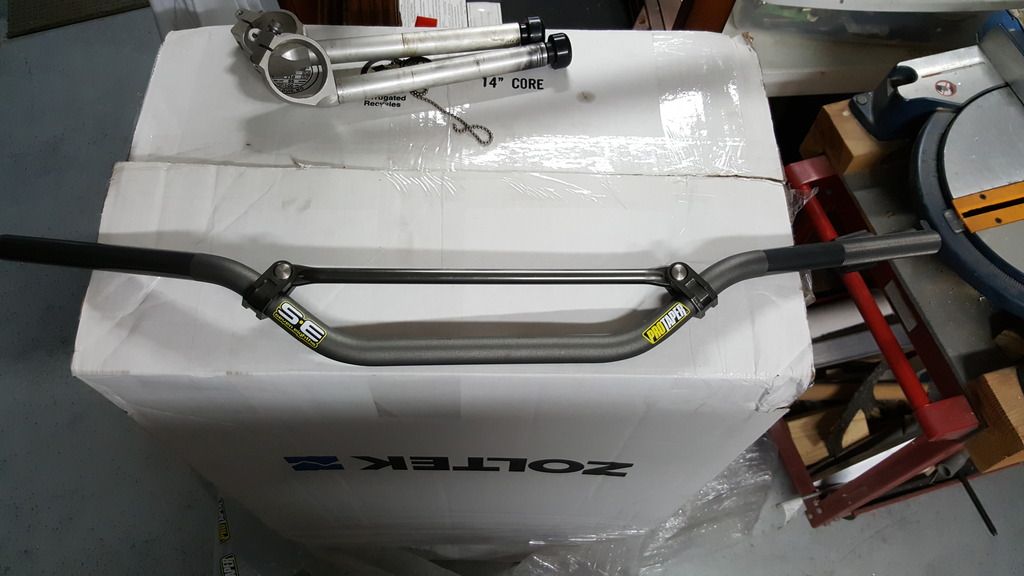 So that is it for the big stuff for the time being. I am currently in a holding pattern waiting for everything to arrive. In the mean time, I need to identify some smaller detail stuff on the bike. This is where The RPF detectives come in to play.

First up is the perforated metal that is used on the exhaust and fork cover plate. The exhaust is about 4" in diameter at the end, my guess is that the holes are 1/8" and the metal is stainless steel. 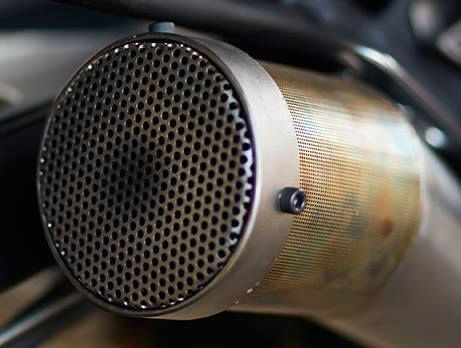 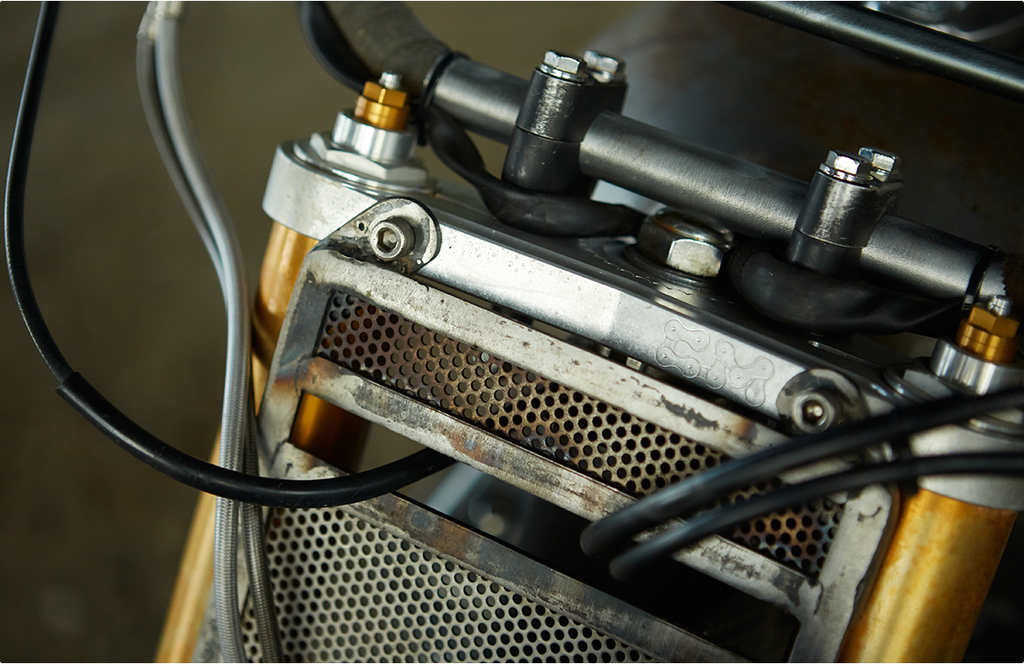 Next thing I need is to find out what size mesh this is. My friend contacted Classified Moto and managed to get that it was some brass mesh he had laying around the shop. After some digging around, it could be the brass mesh that is used in fuel related applications. Not 100% though. From the looks of it, it is used in two places on the bike. On the exhaust, and on the crank case cover. 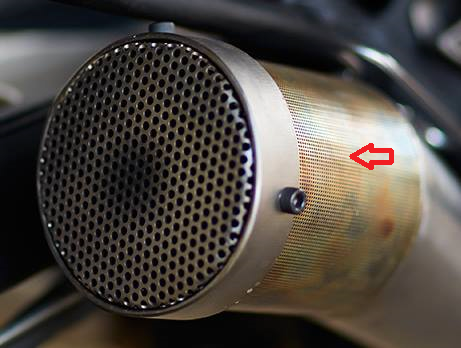 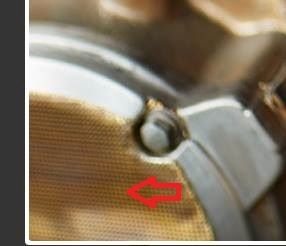 I also still need to find out who makes the brake light, the headlight, the mirror and the kick starter. So any help there would be amazing. I have tried contacting Classified Moto a couple of times, but I'm guessing they are incredibly busy. I was interested in buying the seat, the bag, and the custom upper tree they made.

Wow you definitely did your research on this one. Nice work and can't wait to see the finished project.
H

Awesome detective work! I can't wait to see it all come together.

Possible identification on the headlight, but I am not sure.

Here is the one from the Daryl bike, I took the clamp opening from the bottom and the mount as my reference points.

Here is the one I found on eBay, it seems to have the same identifiers

The only think I have to verify is the size. The light on eBay is 5.75", so I will need to measure the width across the forks to see if it looks to be the same.

Next up is the mirror. I think I have found the mirror, but the piece it is mounted on mystifies me.

I can't find any good shots of how it is mounted. So if anyone has pictures of the bike in person, that would be awesome. The curve of the arm and the base look to be spot on.

Im still having trouble finding the exact model of tail light. The light in the pictures looks a little deeper than the ones I find online. So if anyone recognizes it, that would be awesome.

I wouldn't mind driving that bike around.

Headlight is pretty much confirmed now. Measured the distance from the outside of the forks last night and compared it to the headlight measurement.

I measured the width of the swing arm on the tail light side. It is right at 1 1/8", making the taillight around 2". This should make the search a little easier.

Found the ignition switch, or one that is VERY close.

While I am on the ignition. I need someone to help identify the material used on the key ring and the black material on the end of the ring.

Looks like a piece of canvas webbing from old military gear. Based on the color, I'd look at WW2 era equipment. Probably a helmet strap or some other small item that would have a small strap on it. The black end is a to keep the canvas from fraying and to make it easier to slip through a buckle. If you can narrow down a size, it should be easier to figure out.

In other news, my carb decided to start dumping fuel out of the overflows. So I decided to yank it and rebuild with new seals. Im currently waiting on the kit to arrive as well as all of the other "now identified" parts.

Made some progress on Sunday. I began tearing down the bike. Once you get the airbox out, the middle of the bike is pretty bare.

I decided I want to also do this build, so I will be following yours very closely. Thank you for everything you have worked out so far.

Sent from my SM-G920I using Tapatalk

RPF PREMIUM MEMBER
Outstanding work, I live for this kind of stuff. Keep up the great work, I am really looking forward to this thread!,
U

Some more progress has been made.

Frame is now cut....seriously the point of no return..

I've had some questions on cost. So here is everything laid out that has been spent so far. It is definitely not the build for someone who does not want to spend money. Classified's price on the bike is $16,000 (and I can definitely see why). However, they only built 2, and according to John (the owner of Classified), they are not allowed to make any more. So my goal is to build the bike for about half that.

I just realized that I may have shot myself in the foot giving away all the details I found too early. I am now finding myself in a position where specific items are being bought out from under me. While I'm more than happy to share my work, there has literally been hundreds of hours poured into figuring out the small stuff. I will continue to post progress, and will repost all of the specific items and their costs once the build is done and I have all the parts I need.

That being said, I should have some pretty awesome updates this week.
Last edited: May 31, 2016
C

Sorry to hear that. Hopefully you get everything.

Sent from my SM-G920I using Tapatalk