Vote For Your Favourite Movie of 2014

Vote for your favourite movie of 2014. Choose one movie from the above poll to cast your vote.

Movies in the poll are listed in release date order and there are about 40 movies listed as a refresher.

If your choice of movie is not listed in the poll, choose Other and mention the movie in the comments. You can also list your other (top 5 or 10) favourite movies in the comments.

I saw 44 movies of 2014 and 16 of them were in the theater. I have yet to see Whiplash, Birdman, Inherent Vice, Selma, American Sniper and few others which I missed.

There were some great big budget movies this year, along with many great independent movies too.

My top favourite movies of this year are as follows. 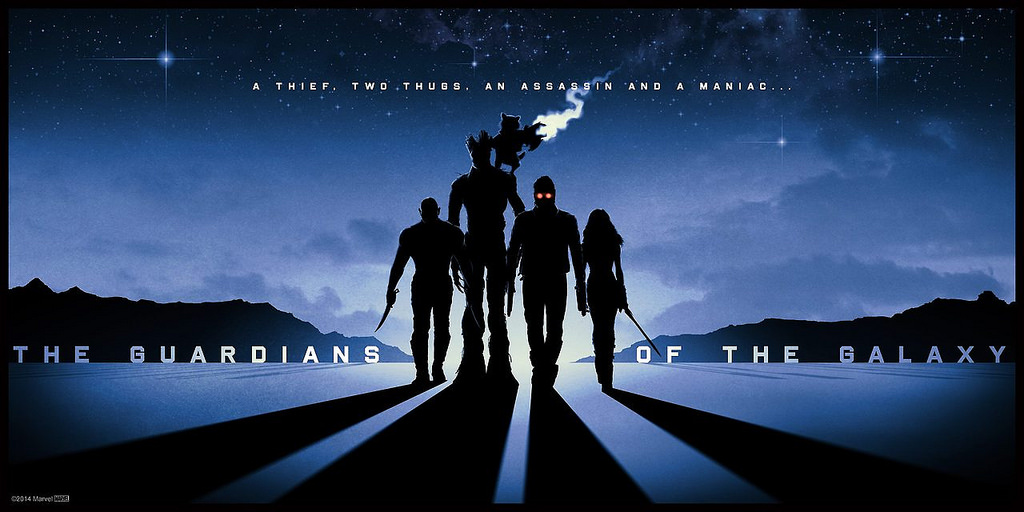 Two cool mashup videos showcasing scenes from movies of 2014. The second one is little longer but is great and well done.

I didn't vote for it here but I have to say I really enjoyed Jodorowsky's Dune. If his movie had been made it may have been a train wreck but that doesn't change the fact that the documentary was really fun to watch.
V

James Gunn shared this on FB.

https://www.facebook.com/jgunn/posts/10152433255156157
Many asked him about some other movies they liked and he talks about them in the comments.

Admittedly, due to my schedule, I've probably seen less films this year than any other year, outside of the one before it when I was actually shooting. And I, of course, am not including Guardians of the Galaxy on this list, as that probably wouldn't be fair. But here are my favorites of the ones I've seen. And, although this list isn't really in order, Whiplash is my very favorite of all of them; I strongly suggest you see it immediately.

NOTES
1. These are my favorites, not necessarily the best. They don't have to be yours.
2. It must be the year of the director team (???) as there are four pairs.
3. Yes, you're right, I DO like action movies.
4. I'll post my favorite songs and my favorite TV shows of the year soon.
5. Comment below. Kindness to one another is imperative. "
V 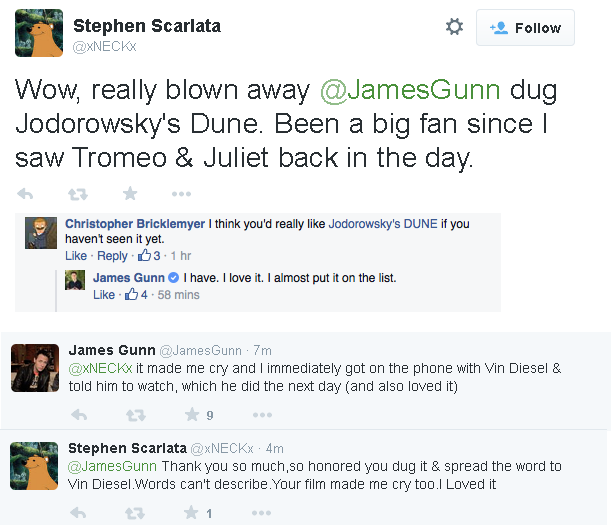 I really enjoyed a lot of these, particularly "Lego movie", "Grand Budapest", "Winter Soldier", "Guardians", "Dawn of the Apes"...
"Edge of Tomorrow" surprised the heck out of me. I must have watched it a dozen times.

My vote, though, goes to "Under the Skin".
Such a creepy, haunting, beautiful film.
My number two isn't on your list, but would be "I Origins".
F

I like many movies in the list like edge of tomorrow, maleficent, dawn the planet of the apes, boyhood, the hobbit: the battles of five armies. But, the one that I like most is the hunger games: mockingjay part 1.

RPF PREMIUM MEMBER
Tough choice!!! I went for Guardians of the Galaxy, but if I could vote 10 of them , I would have done it xD

What places Guardians of the Galaxy at #1 for me is that it has that rare quality that I just can watch it over and over and enjoy it every time. I also notice new things on subsequent viewings - like how Rocket is the only character that can make Peter lose his cool. I laugh every time Rocket gets to him and it happens often.
Everyone laughs at Groot getting the battery in the prison break but notice Drax standing with his food tray watching Groot then glancing at the rest ... it's just as funny.
Last edited: Feb 11, 2015

Man that's hard... I didn't realize just how many good movies came out this year.

I noticed Robocop didn't even make the list. Surprising... I enjoyed it.

My picks from top to bottom...

Captain America: The Winter Soldier (tough call because GotG was awesome. This was almost a tie)
Guardians of the Galaxy
X-Men: Days of Future Past
Edge of Tomorrow
Interstellar
Big Hero 6
The Lego Movie
Dawn of the Planet of the Apes

Captain America:TWS with Guardians of the Galaxy a close second.

It had to be X-Men: DoFP for me. I loved the Claremont/Byrne storyline as a kid and as an adult I was really impressed by Magneto's display's of power and Quicksilvers whimsy and thought provoking abilities. A really fun movie, with Capt. America coming in 2nd for the year. I will admit though that while I hadn't read the book as my wife had, I found the Hobbit to be fairly disappointing with it's thin storyline and overblown non stop combat. Sorry Hobbit fans, no disrespect intended.

I Origins - Don't read a review or watch a trailer, as it will ruin the entire movie. I've watched this with both men and women. Men seem to be much more affected by it.

Guardians of the Galaxy - A lot has been learned from "The Iron Giant".

Big Hero 6 - A LOT has been learned from "The Iron Giant".

John Wick - Gets better every time I see it, and I've gotten a lot of mileage out of the Blu-ray already.
Last edited: Mar 1, 2015

I had to go with Other. Tusk was my favorite movie last year. Planet of the Apes and Snowpiercer were my two faves on the list though (admittedly, there were a few I haven't seen. As a huge fan of the book Dune I'm sure the doc will grab me when I see it).
V

Thanks to everyone who participated in the poll. The current final votes are as follows.

V
Most Anticipated Movies of 2020