Here's what's in the works currently. The plan is to have a realistic bust of Vincent Price, with silicone skin, punched hair, acrylic eyes, etc. Should be a nice portfolio piece if it works out how I'm envisioning it.

I'm going for a "House on Haunted Hill" era Vincent. 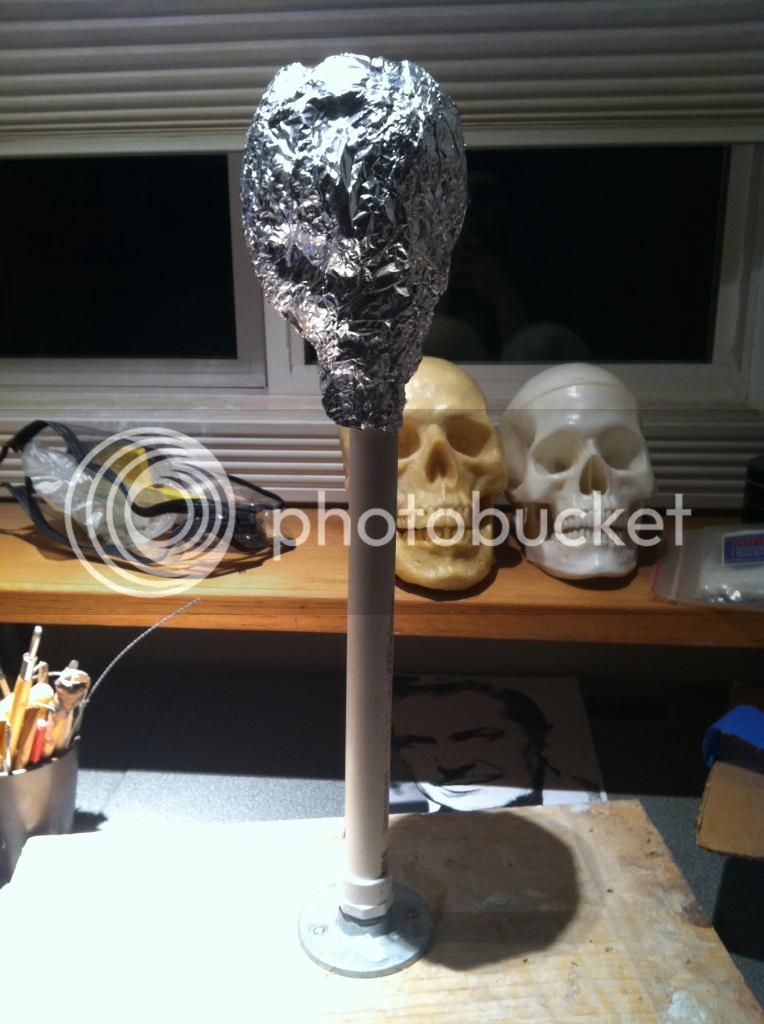 The less the better, so it doesn't interfere with the proportions of the sculpture. The only reason to sculpt a head on top of another one is if it's going to be a mask.

Step 2: roughing out the sculpture

I use Chavant NSP Medium clay. This is a few sessions in. Still quite a ways to go, of course, but I thought y'all might like to see this from the beginning.

Looks really good, even in the rough stage it's easy to see who it is.
S

A very nice start to an interesting subject.

Another few hours in:

By jove, that looks nice

You've caught that mischievous look he'd get now and then during movies and on tv.

Thanks for the kind words, folks. Still a long way to go with this guy. Here's a few shots, each a couple days apart of the last week or so of progress

And then I lost track of the likeness, and he went into a weird Timothy Dalton land for a short time. No pics of that stage, but today I think it's starting to shape back up:

It's been a while since we last saw dear Vincent, so let's have a little update, shall we?

As before, each photo represents another session of sculpting (more or less). I apologize for the size of the pictures.

I realize that the difference between each of these photos doesn't seem huge, but what was actually happening was that, in between each photo here, I'd see something that felt off, and completely change an area of his face to adjust it, then adjust the rest of the face to agree with the new altered area. The likeness would completely disappear in those stages, and then I'd snap a picture when it started coming back.

What? That doesn't look like sculpting! Actually, I got a little 3D printer to help with some of the more precision parts of my various projects, and the first order of business was making some properly sized eyeball placeholders for this sculpture. The wooden balls that were there before were just a hair too small. Well, a few hairs. The old ones were 24.5mm, and the new ones are 26mm. It makes a huge difference on a face, though.

So then we had a little...surgery.

It's been a great mystery to me throughout this process how Vincent's face can be so structured from some angles, and so full from others. Keeping a variety of shots around makes it easier to keep track, but making forms that satisfy all angles of the reference is really tricky.

And that bring us up to date. This was at about 2am last night. I realized I had been handling his cheeks all wrong, and it took bringing out the lifecast of a similarly aged actor I had worked with to figure it out. Now we're getting somewhere...I hope!
S

Wonderful work.
That is most definitely Vincent.

Excellent. I've been looking forward to more updates on this.

This is getting very good. Can't wait to see it finished!

I definitely felt the Dalton vibe in the previous posts, but your most recent pics are looking really great. Just comparing your sculpt to the reference in the back, your nose is looking a little on the big side. Hope that helps, but you're definitely on the right track.
W

I'd swear that thing was about to start talking even at this stage. The one picture on your reference photo board is also one of the few I've seen of him without a mustache.

Thanks for the input, folks! Much appreciated!

Slipknot, good eye. Definitely something I need to fiddle with. Thanks.

Wes, yeah, there are only a few films he's been in without a mustache, but seeing that is such a huge help. It really throws me off trying to recreate his face when there's a bar across the middle of it.
W

I just realized that with those 3d printed eyes installed this sculpture looks like something out of House of Wax back in 1953.
D

Such a great project, good work !!!

Stunning work, this will be scarily lifelike once its all done.

RPF PREMIUM MEMBER
That's turning out so well. I envy those who can do realistic busts. A skill I wish to have and struggle with. Well done.

Thanks for the feedback, everyone. Much appreciated.
Not much progress lately, but a friend of mine loaned me a really nice copy of a VP lifecast. I think it 's about 10 years younger than the late 1950's Vincent that I'm sculpting, but it gives a good reference for the landmarks and dimensions on his face. I was actually surprised how close I was on the overall proportions. Most of the areas that are off are pretty much what I expected to find. It'll be an interesting challenge to balance this three dimensional reference with the photos that I've been using to capture the "right" version of him.

F
Original Graflex score. Like new condition!, Has it even been used???