I am starting on my Halloween costume and thought that the plasma caster would be the first item to build. After scrounging around a Michaels craft store and a Home Depot I gave up and went back to my mom's. It had been awhile since I have been in the basement but after going through what had been my dad's shop stuff I found enough materials to get started.

Here is what I found:
Public Plasma Caster Pictures

I have not measured anything out yet. The PVC was originally 12" long but my dad had cut off part of that for whatever project and then I cut a bit more and sanded. Overall length if I continue as planned will probably be between 11-13". Since those pictures were taken I have used a fine grit sandpaper to go over the foam a little bit taking it from a dark grey to more of a gunmetal grey. I also rounded out the pvc pipe pieces a bit too but may need to take a file as well to balance it out.

Tomorrow I hope to pick up some glue, paint, primer, and pencil cup. Since the pvc is hollow I am toying with inserting a small flashing light and a front lens but hat will be later. I am hoping to hide the seams by using glue and primer. Any and all tips and constructive criticism would be appreciated.

edit: since I scrapped the PVC version and went the foam route I moved the pics which broke the links. However, I made the new album public (the link above).

OK, the PVC was not really working for me so I went with more foam. I had picked up two sheets of Foamies yesterday and learned my first lesson. Read the package. On the other hand having some strawberry and blueberry scent was not all that bad.

So I cut a piece of foam and hot glued it into the longer tube. 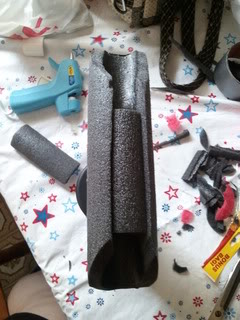 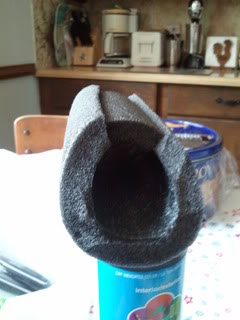 I took a piece of tubing that is used in the swimming pool and cut off the end: 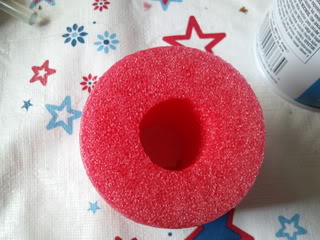 This I glued to the back and then added another piece on top of the barrel. 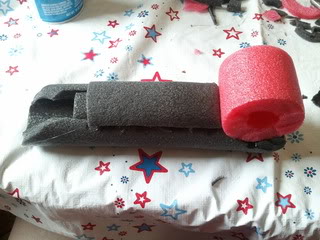 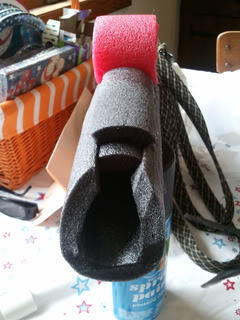 I then went and cut some random shapes from the Foamie sheet and grabbed a few wooden skewers. Using the second stick of glue I went to town. 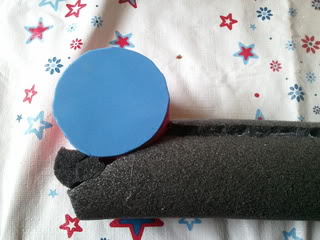 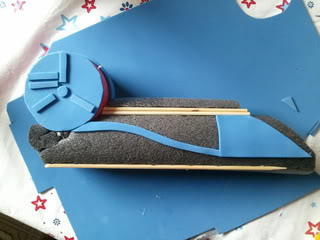 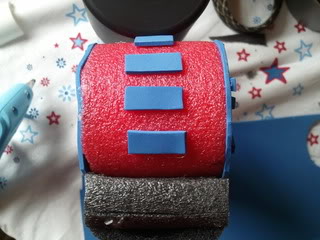 I then sprayed the entire thing black and it is currently drying. So more pics on the way.

Thank you! I am having a ball. I have not done crafts in a very long time. It is looking really good now that it is black although I am thinking of adding a bit more to it followed by more black spray and then maybe a coating of resin. I am probably going with an antique silver finish in the end. 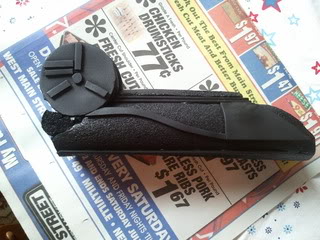 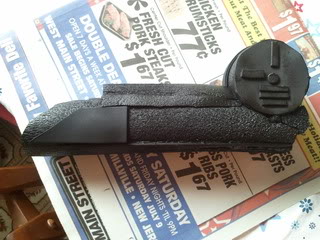 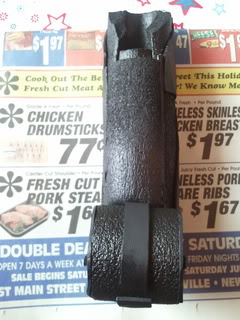 So I decided to add a few more. BTW, the strawberry and blueberry scents smell the same to me. 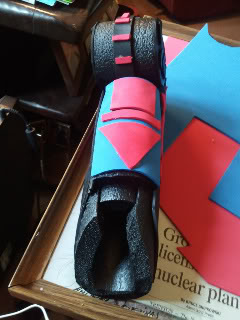 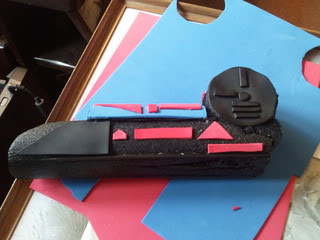 I sprayed the whole thing black again and it is currently drying. I need to use a resin or something similar to tie it all together, strengthen the overall project, and allow me to start the final painting phase.

Gave this a dusting of glossy silver spray paint last night and the effect was kind of "meh" especially since I forgot to spray black over the newest foamie parts. Plans are to follow up with black on the new areas and a new application of the silver followed by using a paintbrush and some black paint to hopefully end up with the effect I am looking for in the end.

This is a great idea i love the look of it and i might try sumthing like tht thanks!
Btw where'd you pick up the Foamies?

Great to see this progress. If you having some issues applying colors to it, try this: Paint it all black then once is dry use a sponge and in a padding motion add the silver (or other color) try not to cover all the black, leave some black spots, remember you don't want it to look uniform.

Keep it up, you doing great !

Thanks for the feedback.

I picked up the two sheets of Foamies from a Michael's craft store. I may buy a roll from somewhere on the 'Net in order to do the armor next. The cardboard that I was using is now separating and is a mess.

The problem I had with the silver I picked up is that I failed to notice it was a quick drying type. It has been really hot here lately and the paint was literally drying a couple of seconds after hitting the armor and the cannon. I am going to layer with black again and then try mixing up some hobby paints for the silver and weathered look I hope to achieve.

This plasma caster was just for me to learn about assembling and what works and what does not. The one that goes with the costume is still going to be foam but I plan on wrapping the pipe foam completely with a layer of Foamie first. Keeping all black the pipe insulation works but once I apply colour to it -- quite obvious that it is pipe insulation.

I also plan to build a cutter like they use for styrofoam projects. Just going to rig up a couple of 9V batteries to a wire and add a handle. that will make the angles and straight lines a lot easier to do and a lot cleaner.

Foamies are great things, aren't they? With enough foamies and glue, it's possible to build damn near ANYTHING.

I never used foamies before but I have to agree that the sky is the limit. LOL

I placed a pic of this in my armor thread too but thought I would talk about the caster here. I finally bought a $1 paintbrush and some elmer's glue. Tonight I took five minutes to go over the entire caster and will repaint it Sunday afternoon. Plans are to work on cleaning my place this week and the spend next weekend working on the bio helm and what will hopefully be the finishing touches on the plasma caster. 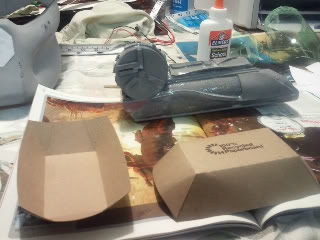