Full steam ahead! The end is in sight so motivated to getting this done. Another day or so of work left I think. Because of the bow fit issues there were some significant gaps in the pipes that span across both sections. It was big enough that it was bothering me to the point where I had to try to fix that. With some more fiddly work with styrene pipe and some brass rods I managed to get it to an acceptable place. Not perfect by any means but unless you are looking up close it does the job. I tried to match the original paint and failed miserably. 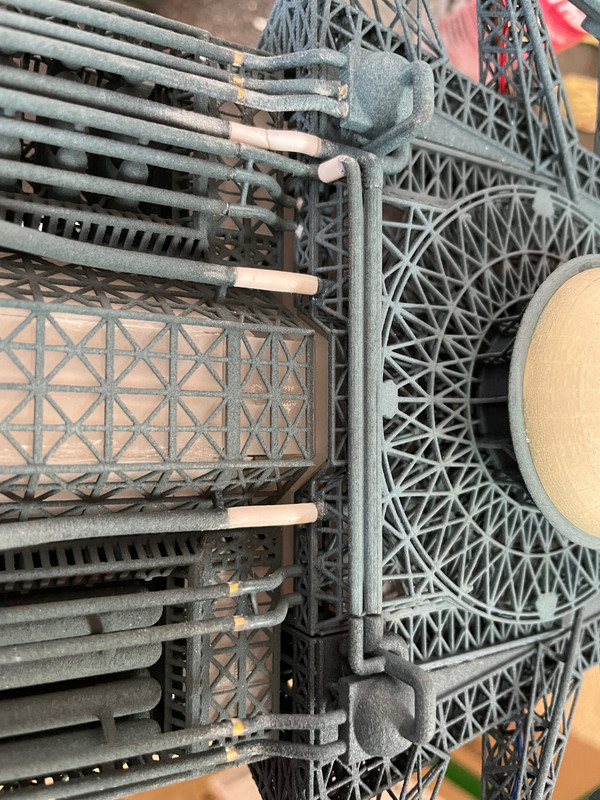 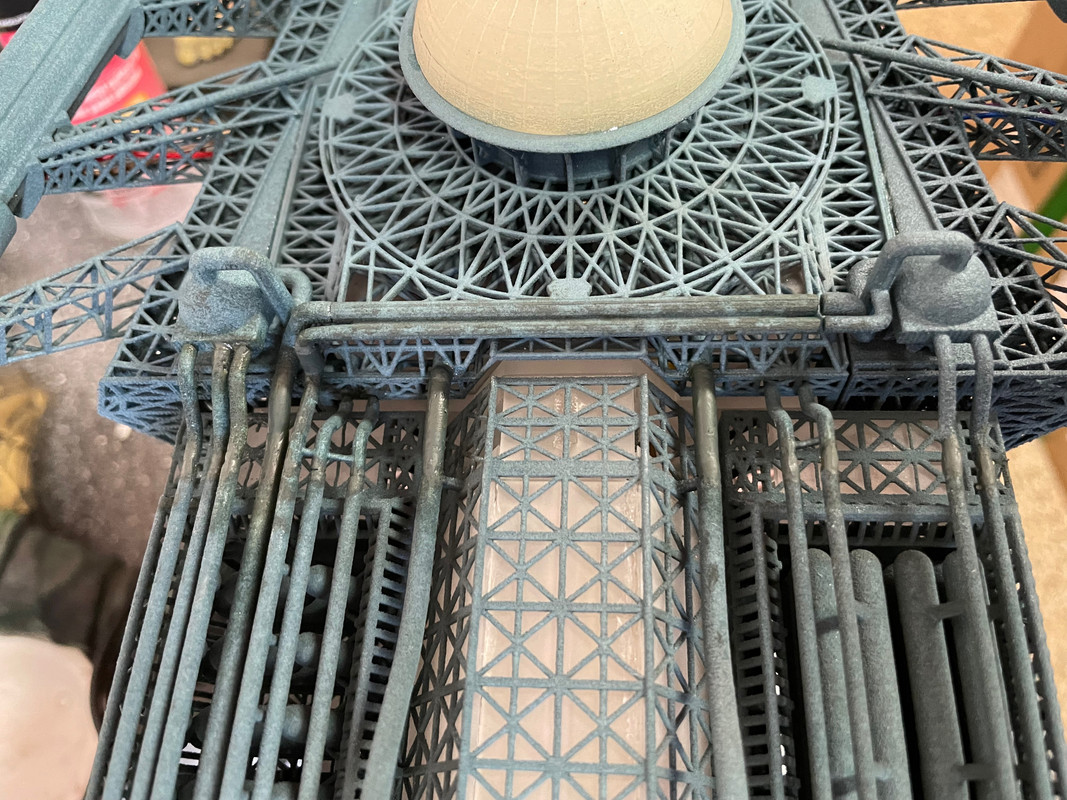 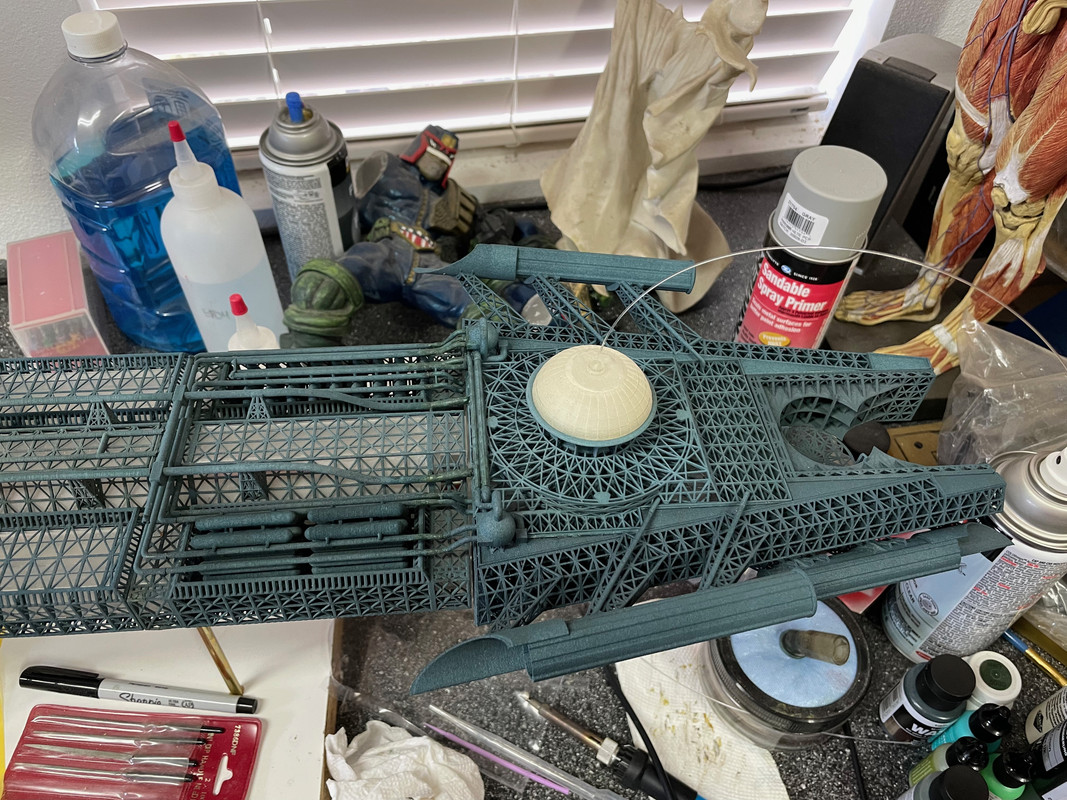 Next up were some of the detail antennae parts. These were extras from Marc Noonan and did not come as part of the Primitive Dave model. They are really nice but also really delicate. Prepped them and mounted them on some brass rods for the bow array and the bigger basket antennae we mounted on aluminum tubes that allowed the fiber optics to pass through. Then painted them and mounted them onto the pyramid like frame that goes over the front domes. Also added the mast/spire which all adds up to a cool looking but seriously delicate piece. And that had to be done in duplicate, one for the top and one for the bottom. 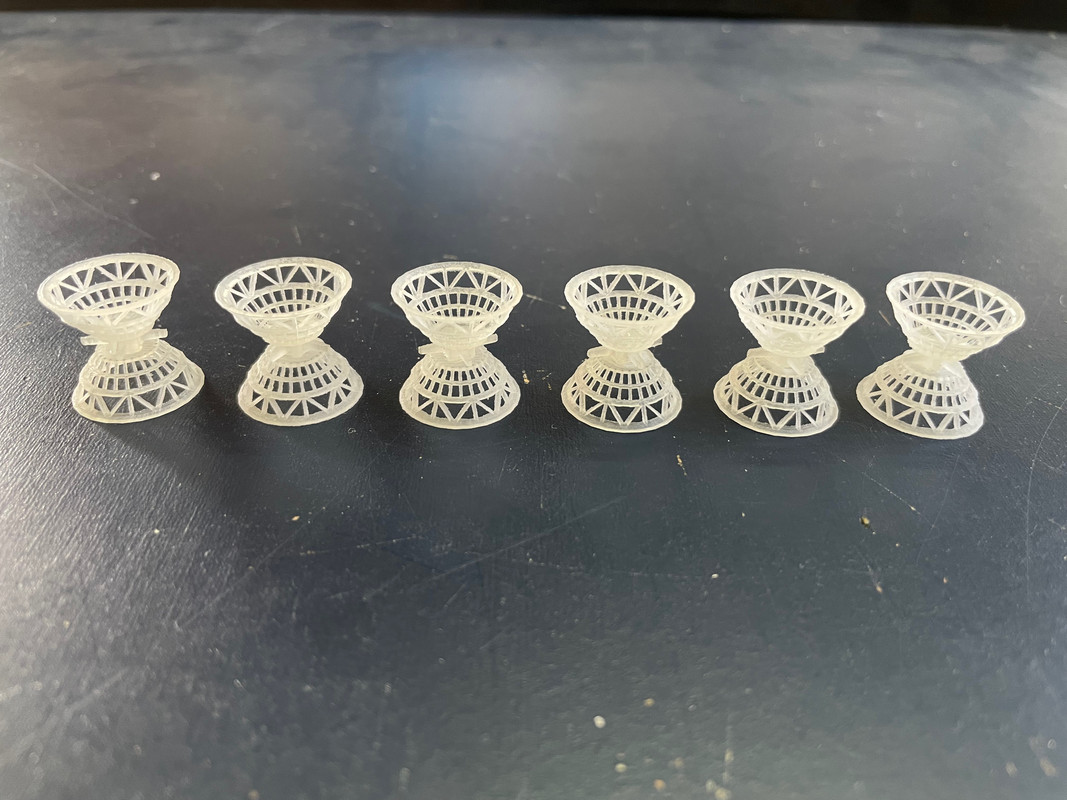 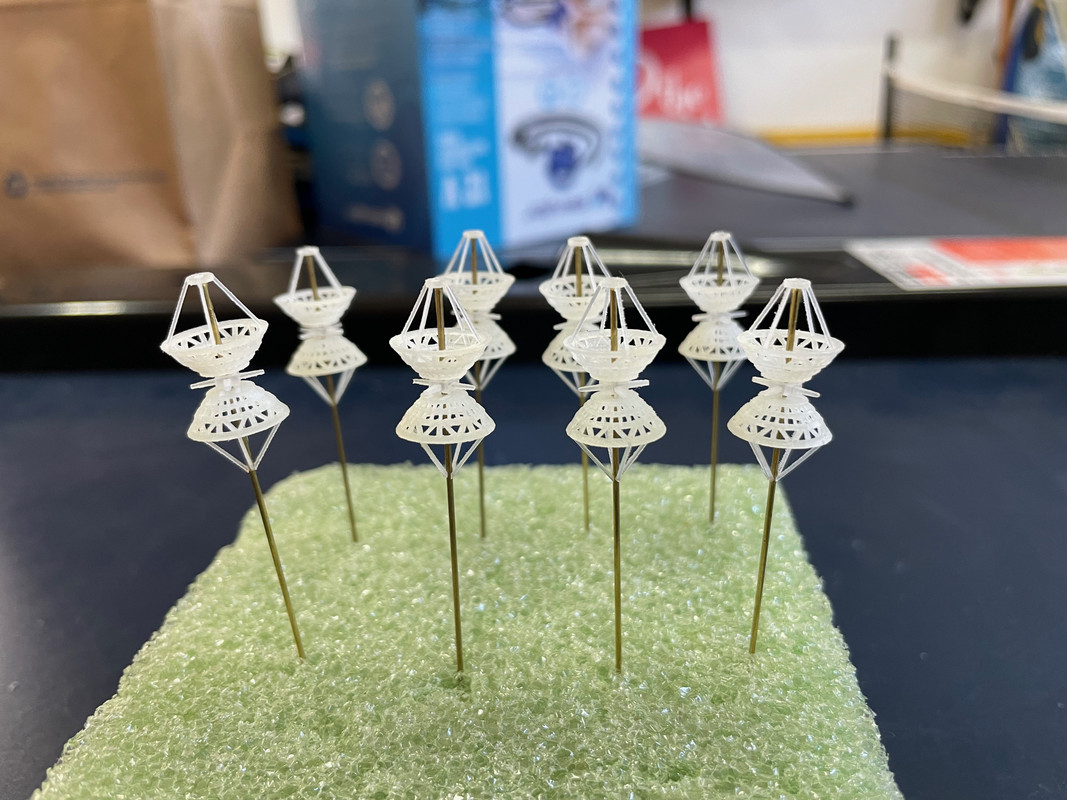 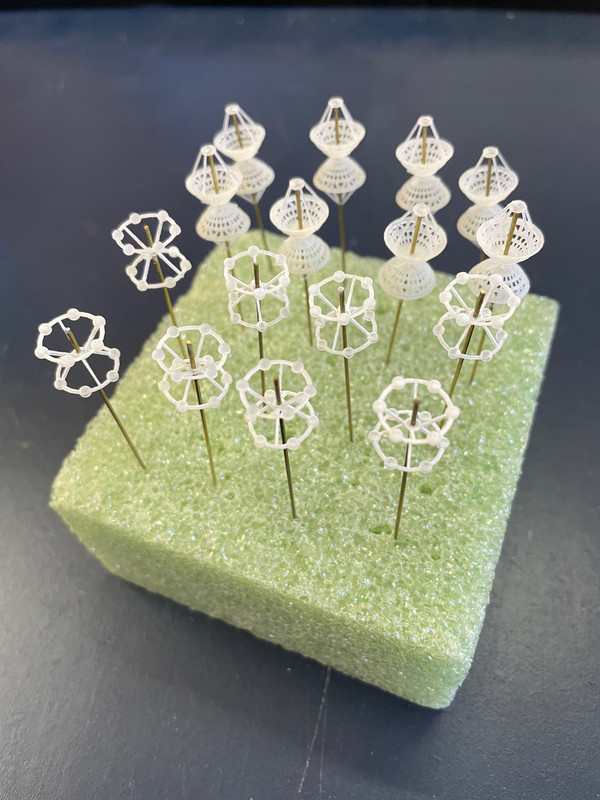 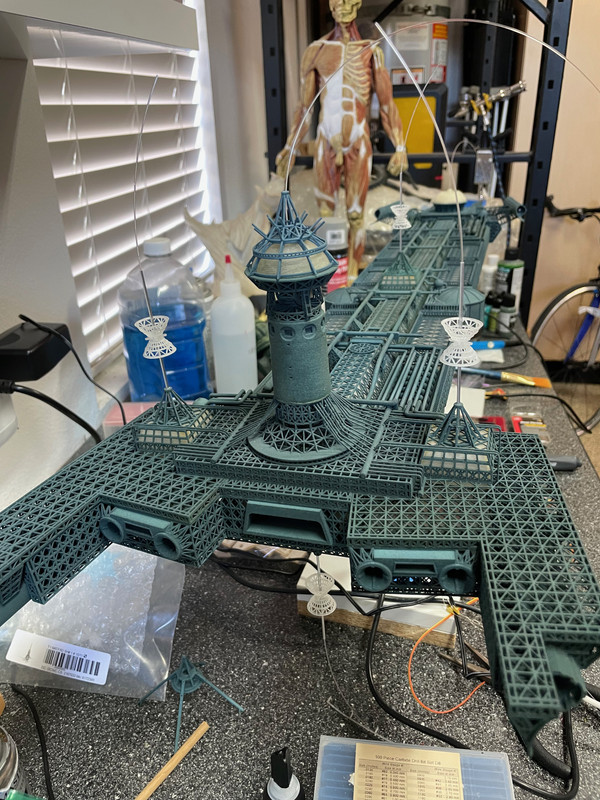 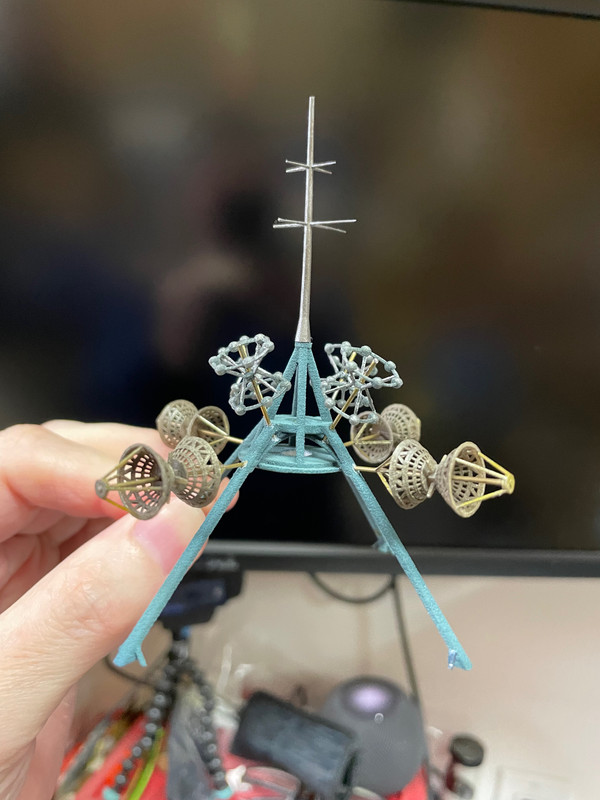 Also got the base more or less finished and when closed up with all the wires hidden I think it worked out pretty well. Its definitely helps finish the overall piece. 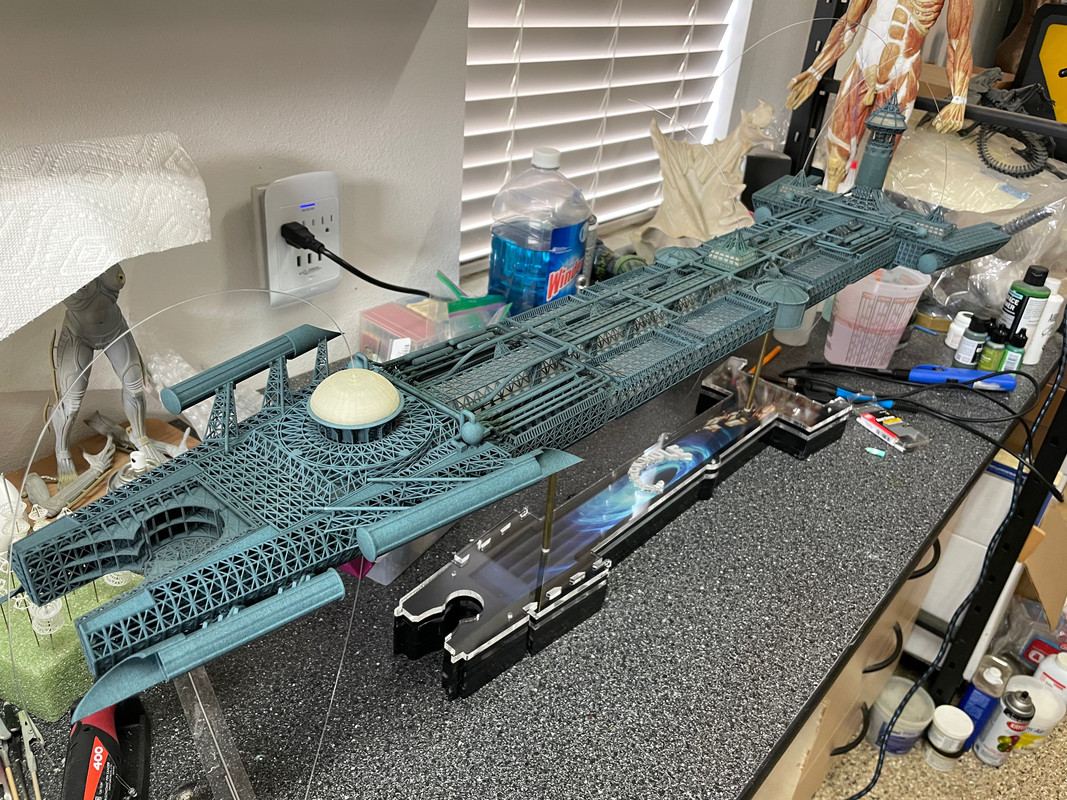 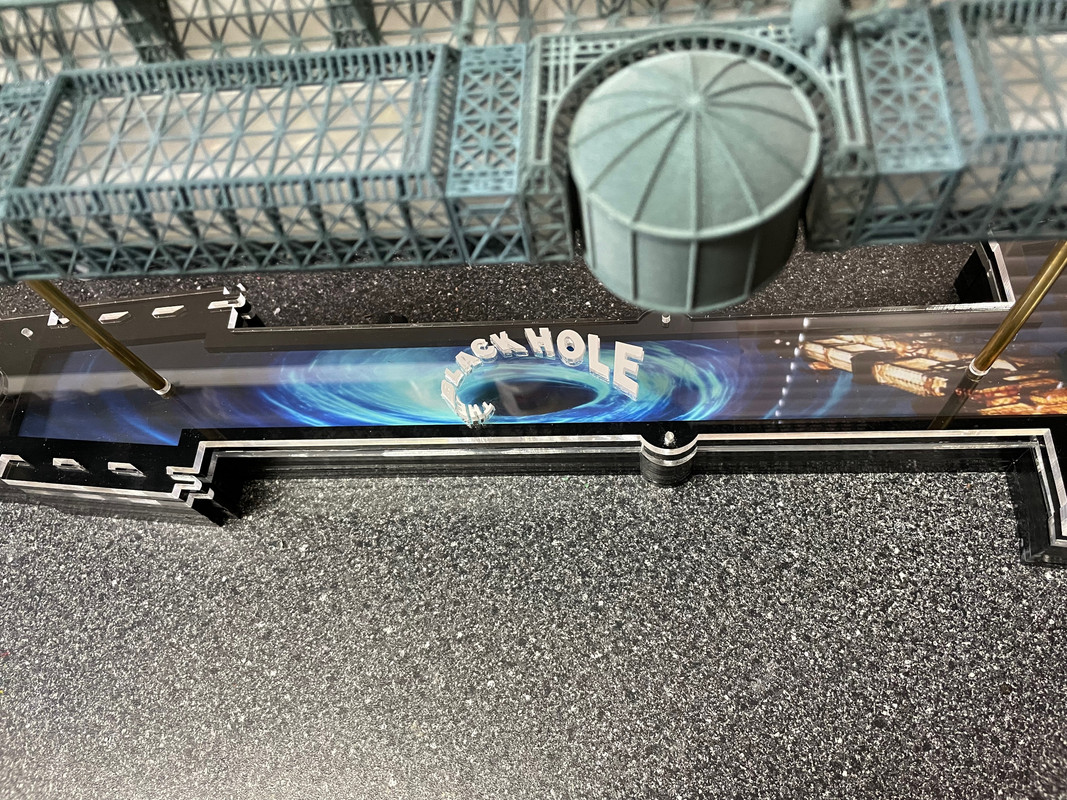 just gets better and better! Loving the base most impressive!!
if i remember right from the beginning you make most of the main body on a FDM printer?? i ask because i have some files from one of the sites to print one.

tdb68 said:
just gets better and better! Loving the base most impressive!!
if i remember right from the beginning you make most of the main body on a FDM printer?? i ask because i have some files from one of the sites to print one.
Click to expand...

Thanks! All the parts for my build were done at Shapeways, probably using SLS, so nothing is done on an FDM printer. I know some people are printing parts themselves. I think a guy called Chris Hewes did a 1/350 version that he printed himself using Primitive Dave parts that he modified. His built up into an absolute beauty. I have not printed anything myself but I am assuming it could be done, certainly at the 1/350 scale. A 1/700 version may getting a bit small for FDM but I am no 3D printing expert.
Last edited: Dec 28, 2021

That is looking fantastic! Where did you get the graphic you used on the base?

star-art said:
That is looking fantastic! Where did you get the graphic you used on the base?
Click to expand...

I cobbled it together from a black hole picture I found online that had the right look and took the highest resolution Cygnus picture I had and overlayed it in Photoshop. Definitely not very elegant work.

I think I am done with the Cygnus! I can probably tweak it for ever and a day as there are things I would like to change. However, it's been a long project and I think it's a case of diminishing returns. Either that or I am just burned out on it. Anyway, the final sprint was to add all the detail parts. I added the "baskets" to the lights on the bottom of the ship. I added brass rods to finish the top spine section. I attached both of the bow antennae arrays without breaking anything, which was great, given how delicate they are. They do add a nice sense of scale to that area. There was also a lot of detail parts to add to the stern tower. Lots of delicate horizontal spires and antennas as well as some sort of radiator array at the base. I did break one of the top detail parts while I was putting it on and it took me as long to fix it as it did putting on all the other detail parts. That was fun! Finally i added the tower antennae. I am still amazed at detail that is achievable with 3D printing. That part has some tiny details that I managed to keep intact. In the end the all details definitely sell the majesty of the design and give it that epic, gothic feel. 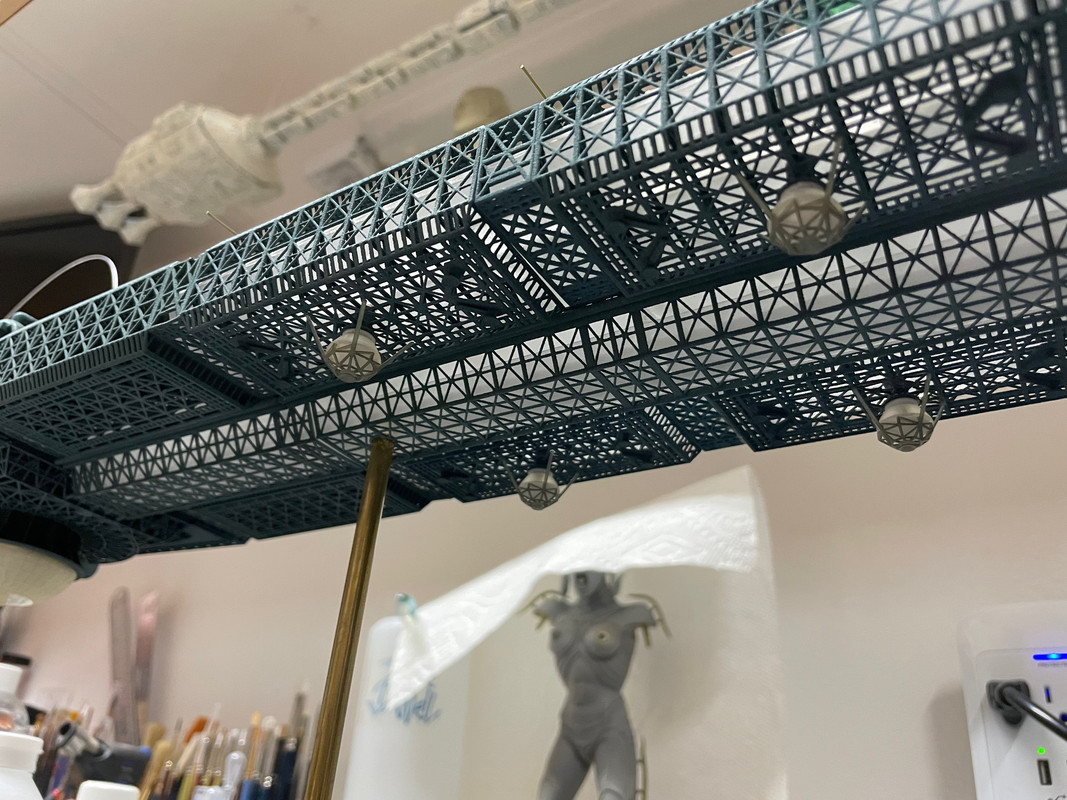 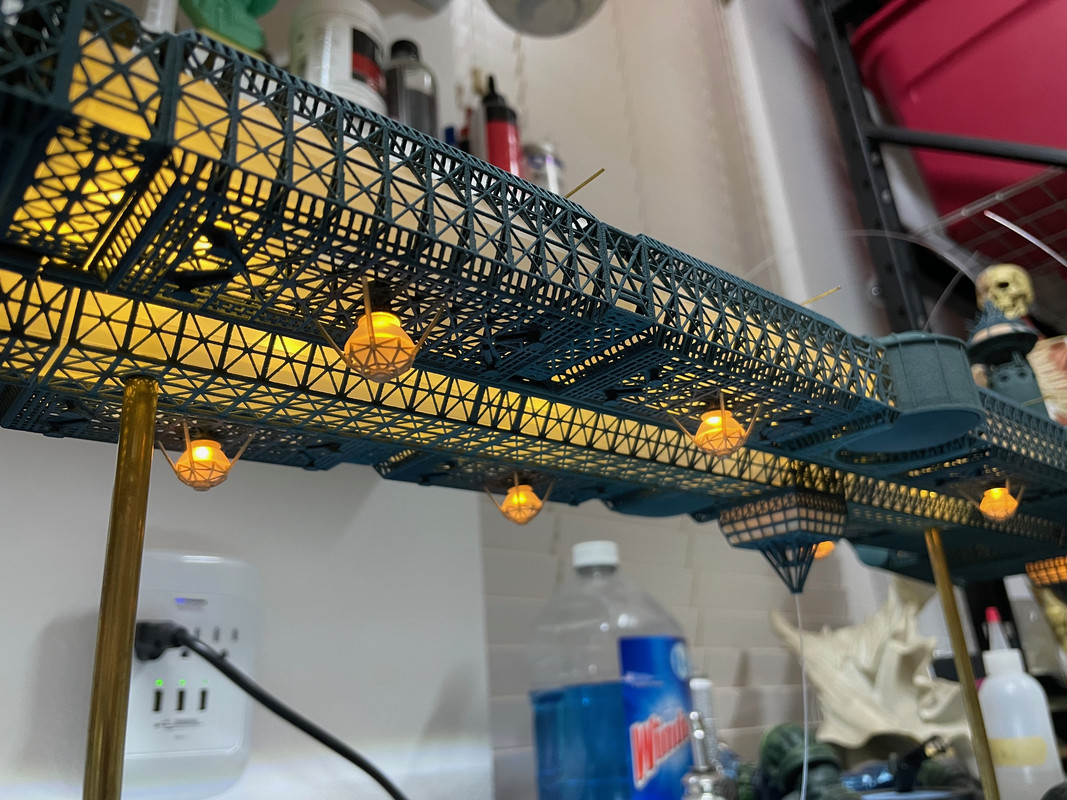 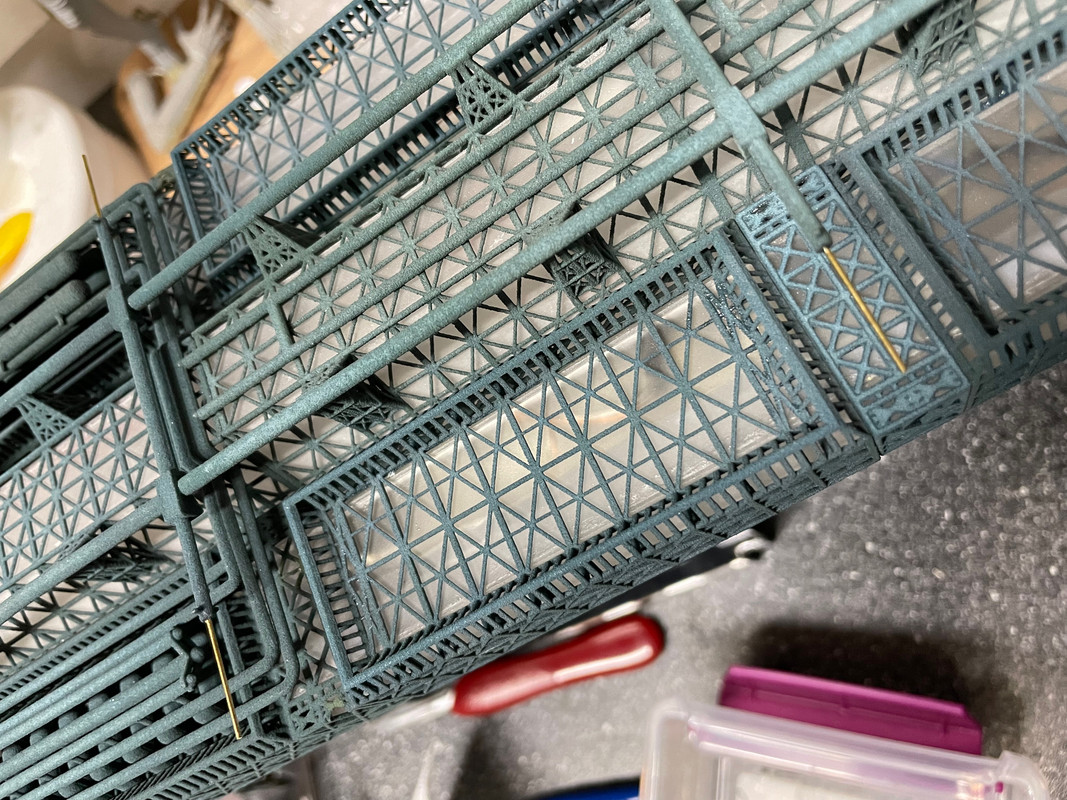 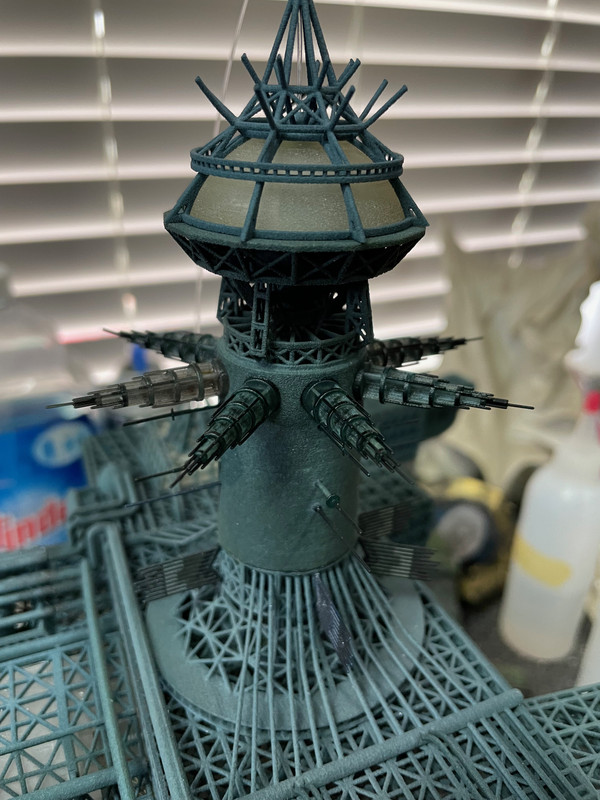 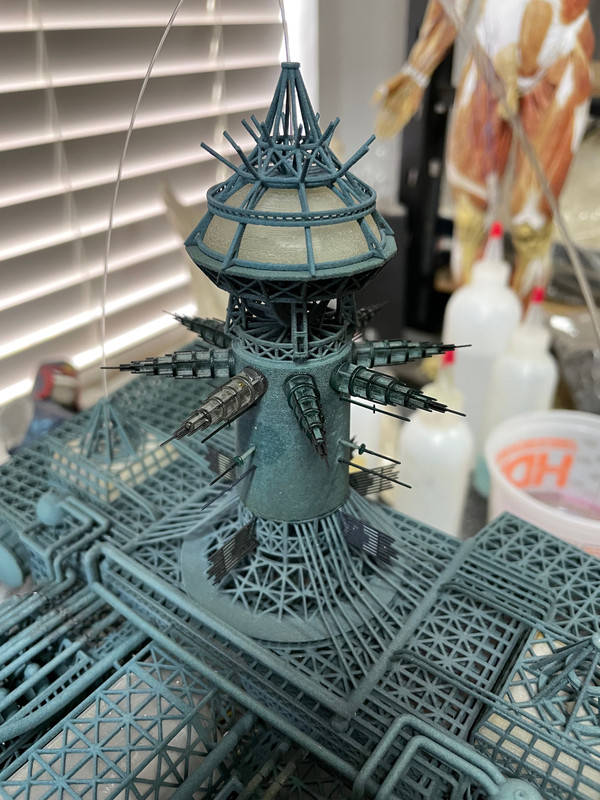 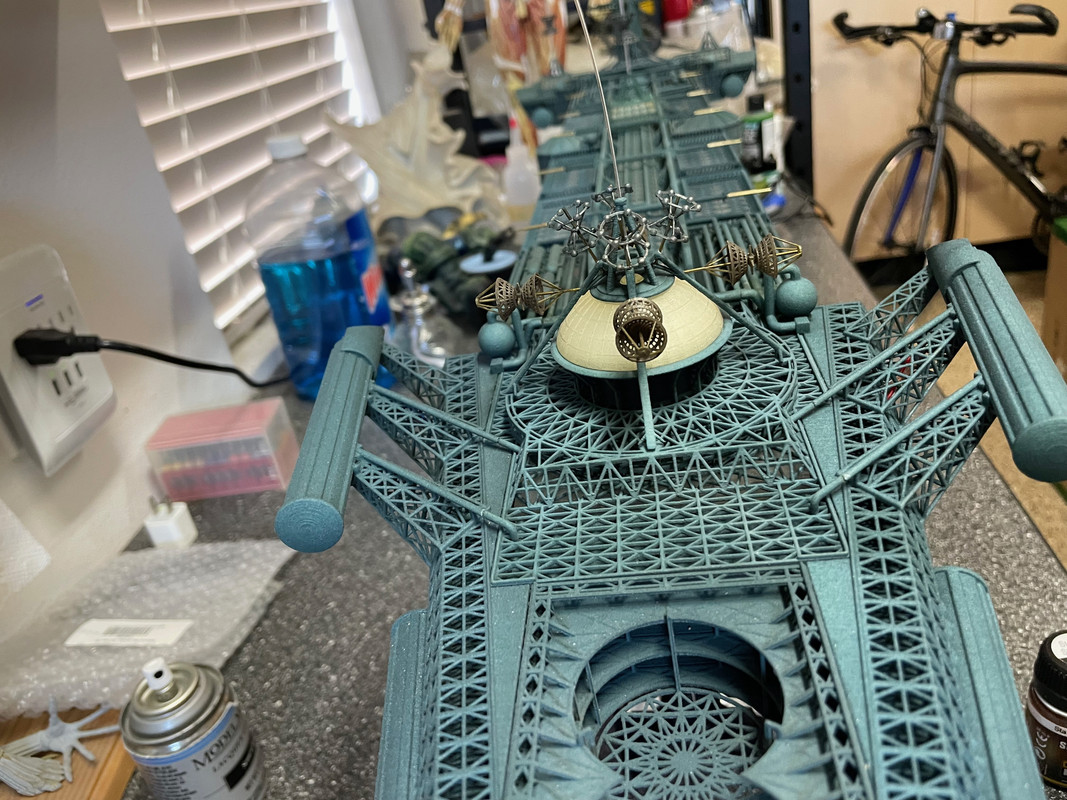 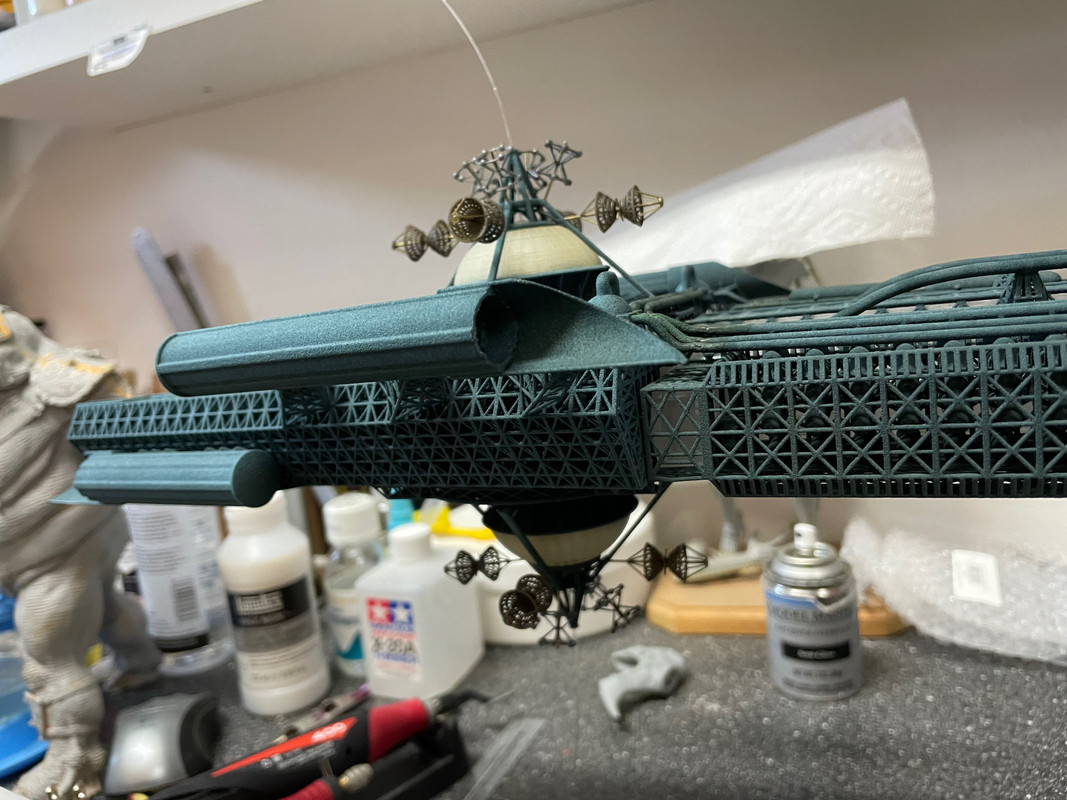 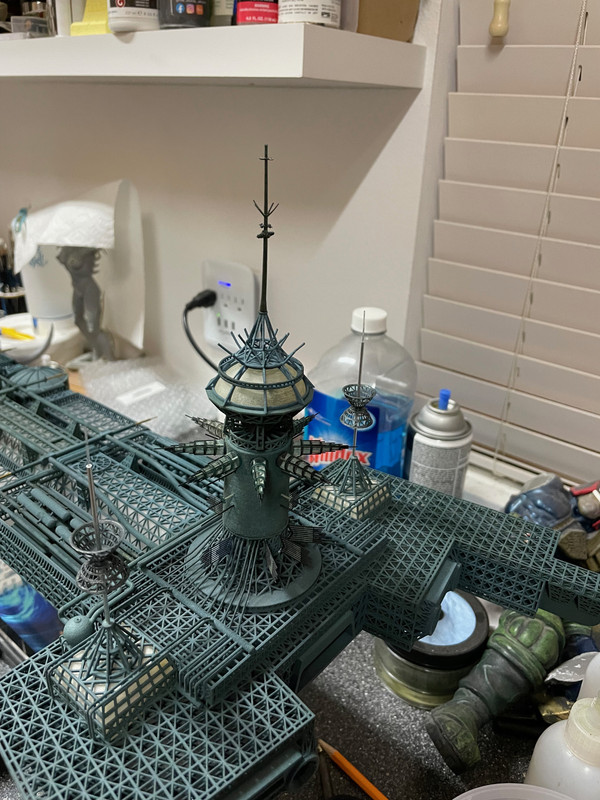 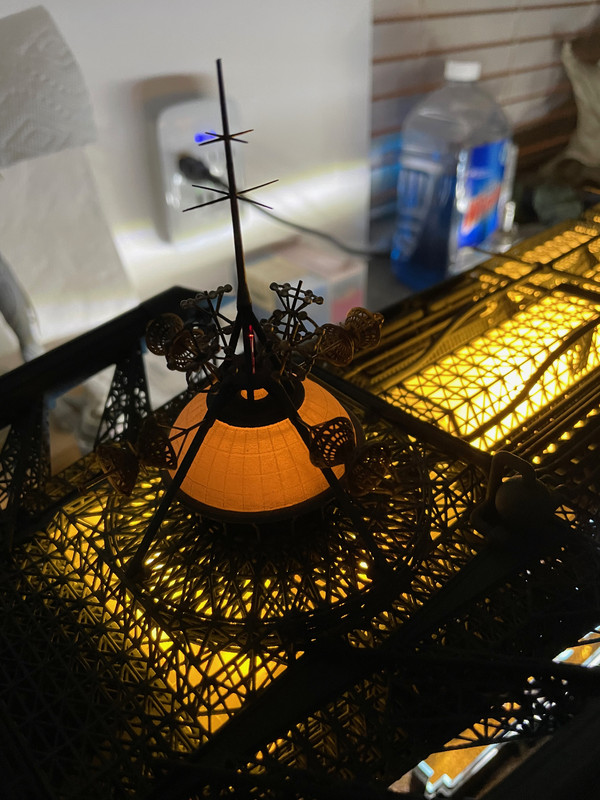 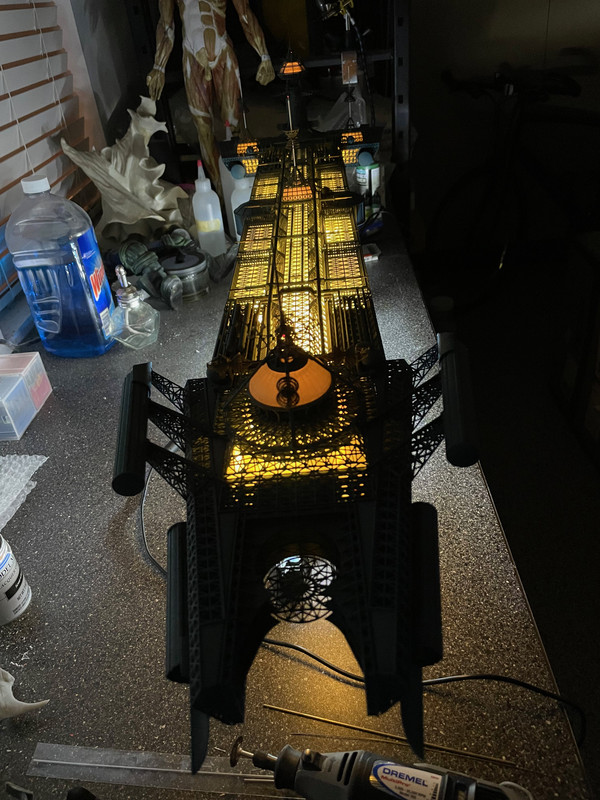 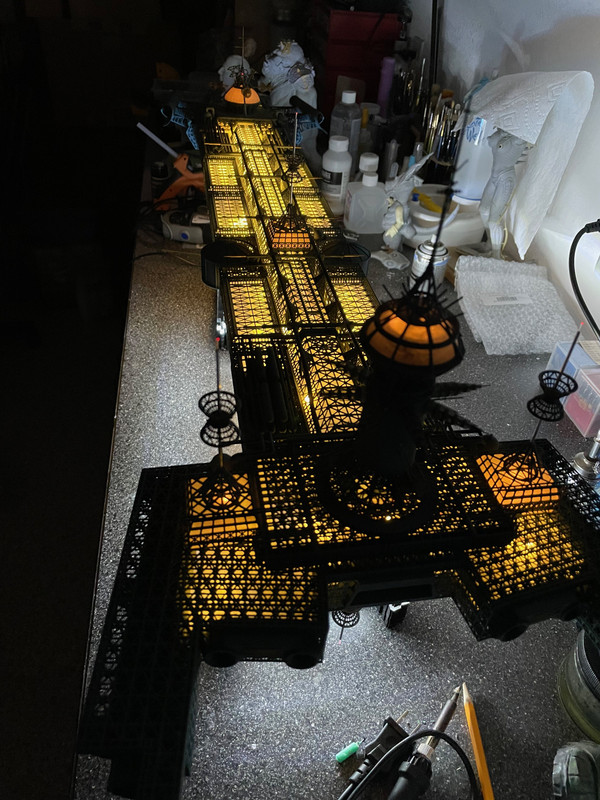 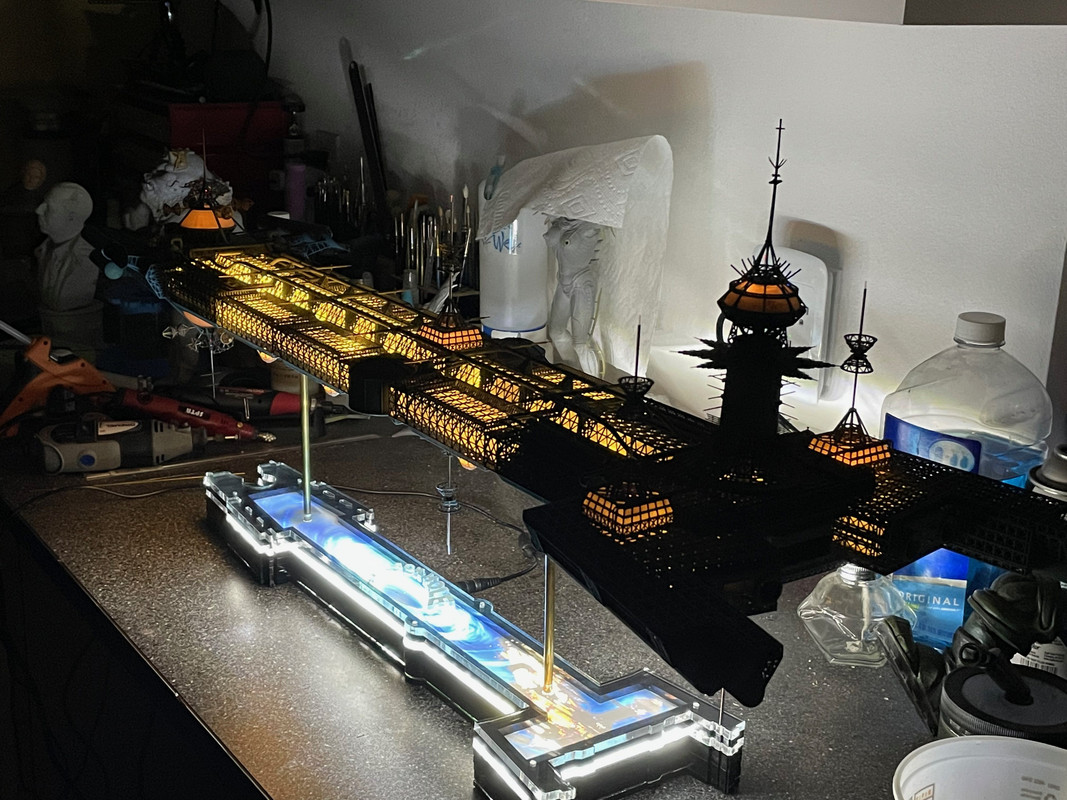 The last two pieces were the Probe ship that was used to enter the Black Hole and the Palomino that docked with the Cygnus at the start of the movie. Again these were provided by the amazing Marc Noonan and 3D printed at Shapeways. The detail on these is so small and delicate that it was hard to get ones that printed successfully. In fact Shapeways warns that they are too thin to print and you have to select "Print it Anyway". I broke these several times just handling them for painting. But, I think it was worth it in the end as they fit really nicely with the Cygnus.

There was one very unfortunate development. For some completely unexplainable reason the blue LEDs in the engines stopped working. We spend hours trying to figure it out, got them back working for a bit and then lost them again. I wish I could at least have gotten a few "Beauty shots" with them but it was not in the cards. Maybe we will revisit some other time. Definitely disappointing but not the end of the world.

I will get some better shots of the fully finished model later for a final presentation. This was definitely the most complex model I have ever attempted. I really enjoyed this project as an opportunity to spend some time with my son. As he is in college now those opportunities are getter rarer so this was a gift in many ways. I hope you enjoyed the build journal as much as I did putting it together. Cheers! 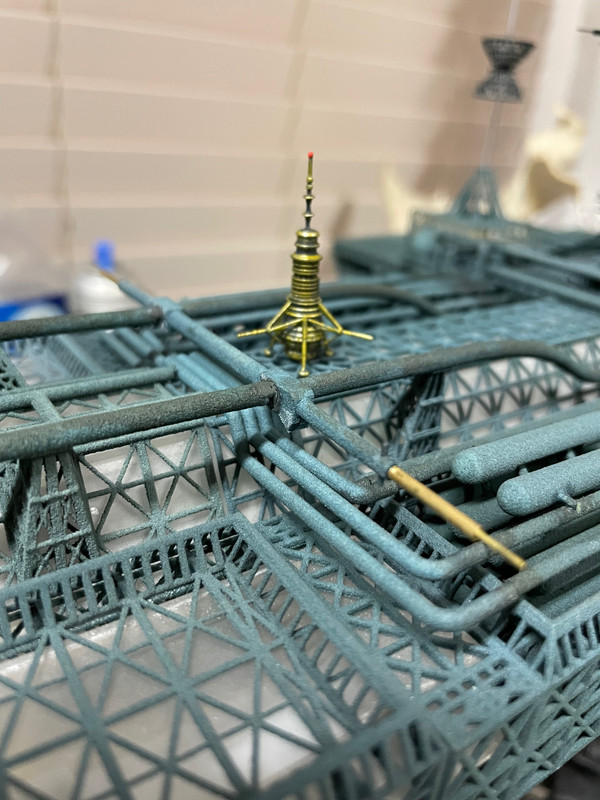 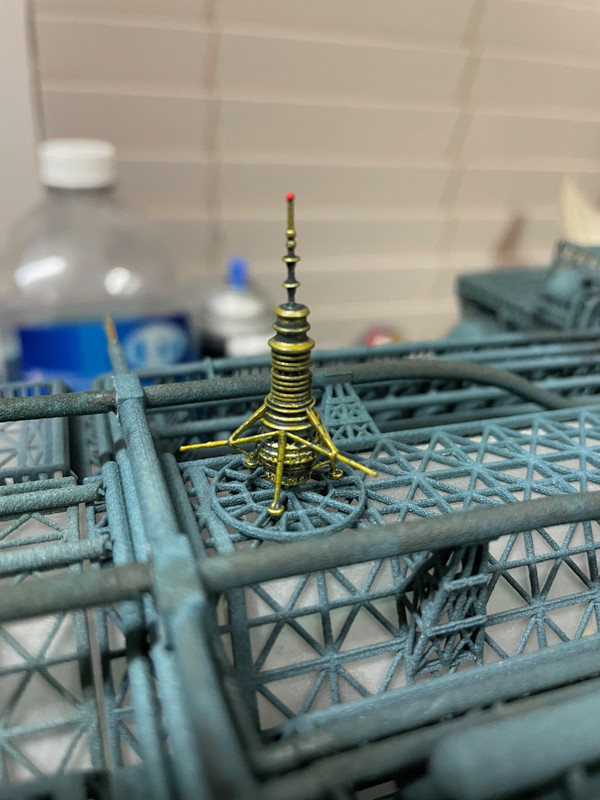 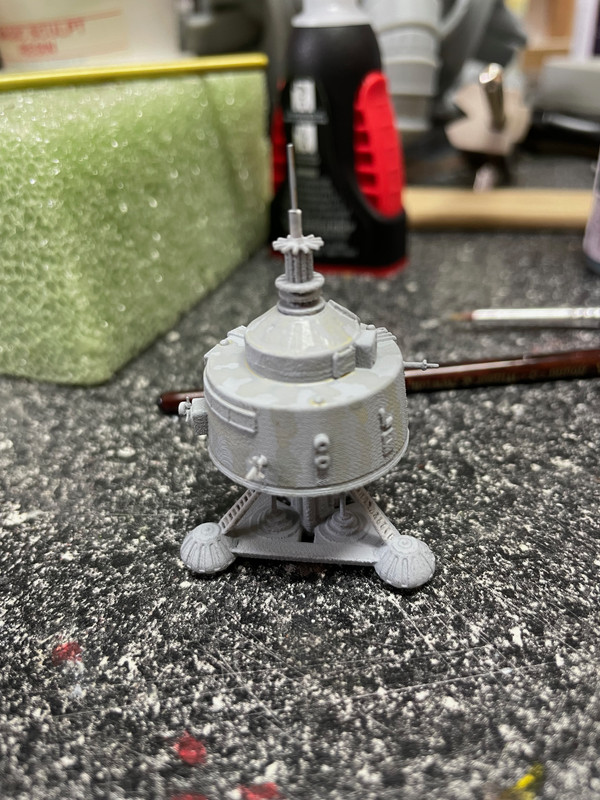 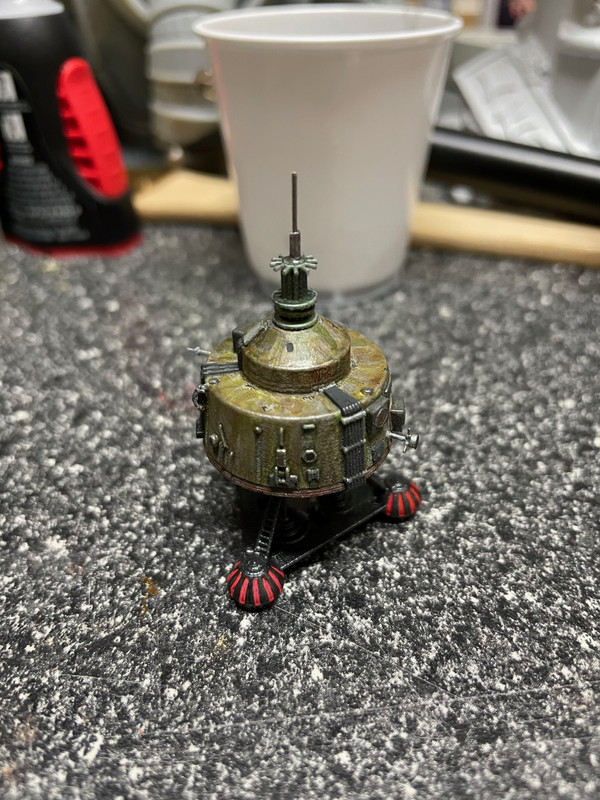 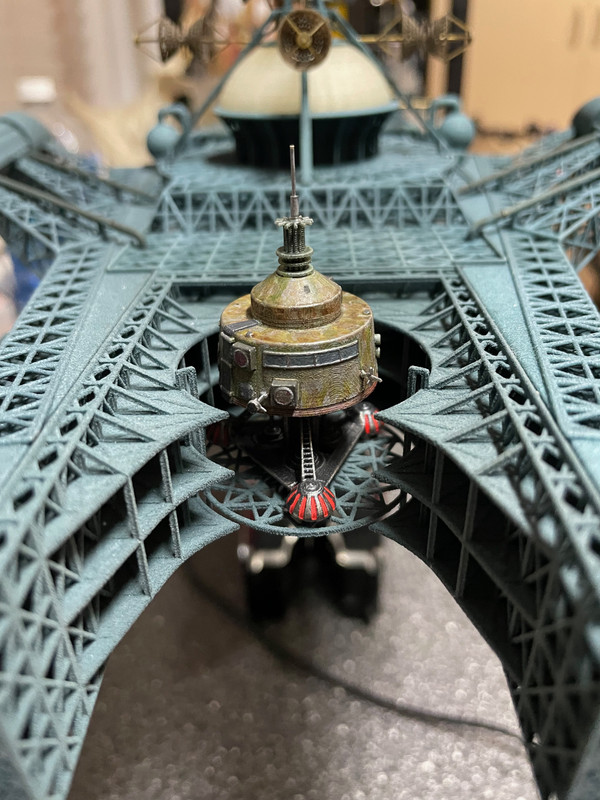 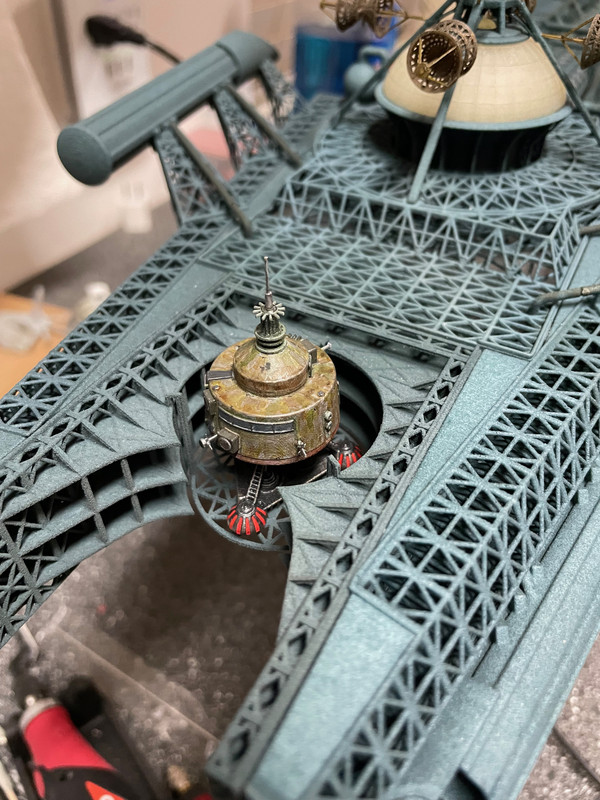 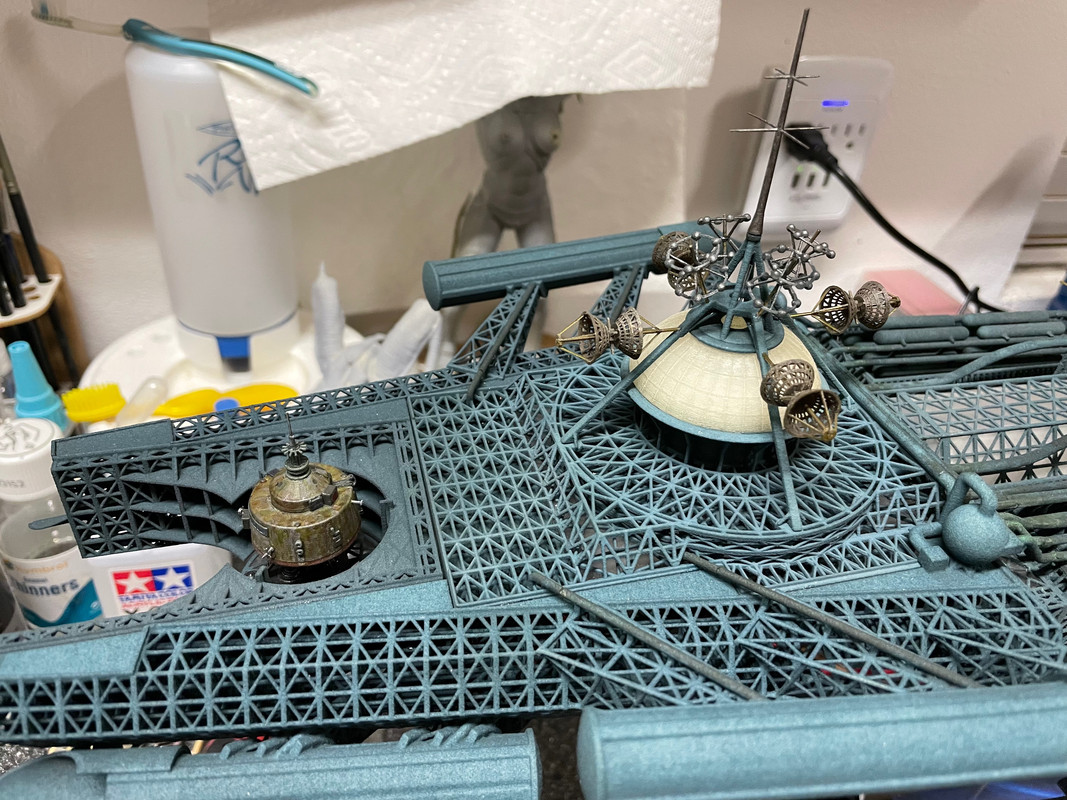 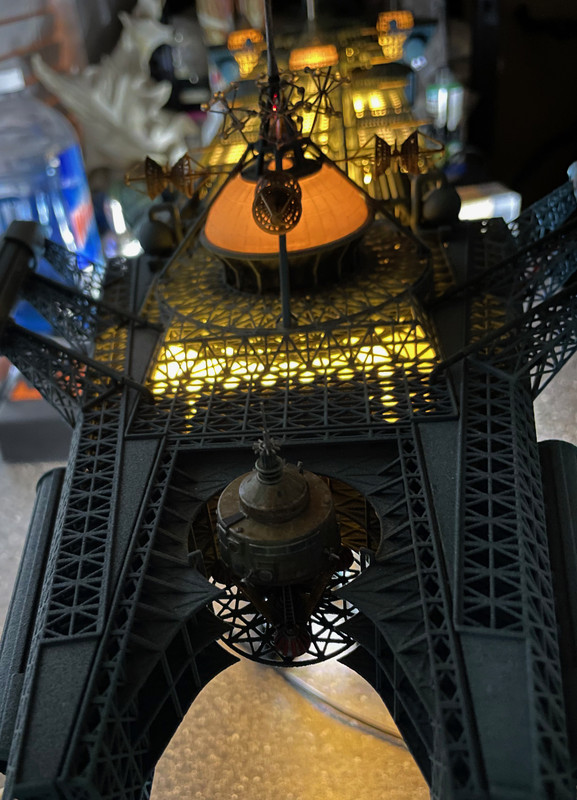 RPF PREMIUM MEMBER
That is really spiffy work. I love the shots where she is all lit up.
N

RPF PREMIUM MEMBER
That is a beautiful ship. I'm envious of it and your work. You did a fantastic job.
Cheers,
Kevin

Even if Black Hole wasn't five star/two thumbs up, I've always loved the Cygnus, and those shots with the ship lighting are right from the movie. It's going to look awesome no matter where you display it.

nivektunk said:
That is a beautiful ship. I'm envious of it and your work. You did a fantastic job.
Cheers,
Kevin
Click to expand...

Thanks Kevin, much appreciated!

Attirex said:
Even if Black Hole wasn't five star/two thumbs up, I've always loved the Cygnus, and those shots with the ship lighting are right from the movie. It's going to look awesome no matter where you display it.
Click to expand...

Definitely one of the better parts of the movie. Its always been a ship that I wanted a model of. Thankfully 3D printing came along and Primitive Dave did an absolutely amazing job modeling it. I hope he is still around and get to see the finished product.

A work of Art. Simply amazing..

Thanks!, Did you do one of these 1/700 Cygnus models also? Looking at your profile pic looks like you did.

szarchie said:
Thanks!, Did you do one of these 1/700 Cygnus models also? Looking at your profile pic looks like you did.
Click to expand...

Believe it or not, four and a half years ago I completed my Cygnus.Time really does fly!

32buds said:
Believe it or not, four and a half years ago I completed my Cygnus.Time really does fly!
Click to expand...

I can definitely believe it! I think I've had the parts for the build sitting in a box at least that long. I just didn't have the courage to tackle it. Ironically it was the chance to build a model with my son that was the turning point. Best decision I ever made.
So as far as I am aware there are three build of the Primitive Dave 1/700 Cygnus then: Yours, Jeff Bond's and mine. Seems like a pretty small group. Do you know of any others?
P

Now, there was a painting of the ship in the movie that had Cygnus looking larger, even more elaborate.

I bet parts from the Terrell Pyramid and Cygnus prints could be combined for that. Or to make Borg cubes.

Your build and painting of this ship is wonderful, and I'm glad you were able to build with your son. Thank you for sharing the build with us all.

At the time of my build there were a couple of others working on them. One gave up and sold his parts. I've no idea if the other ever completed his. The original build is still in the RPF. It's 50+ pages. The whole thing is documented there. Jeff's Cygnus pops up on various facebook pages regularly-you'd think it was the only one in the world...... As for Dave? He just disappeared and hasn't been heard from since. A pity as I have loved to have seen his model completed. Still-we're a select few and I for one am very happy to have started my journey-In,through and beyond!