Upgrading the 3.75" vintage Emperor from Return of the Jedi 1983

So even back in the days when I finally purchased my vintage ROTJ Emperor on a cardback such as this one here : 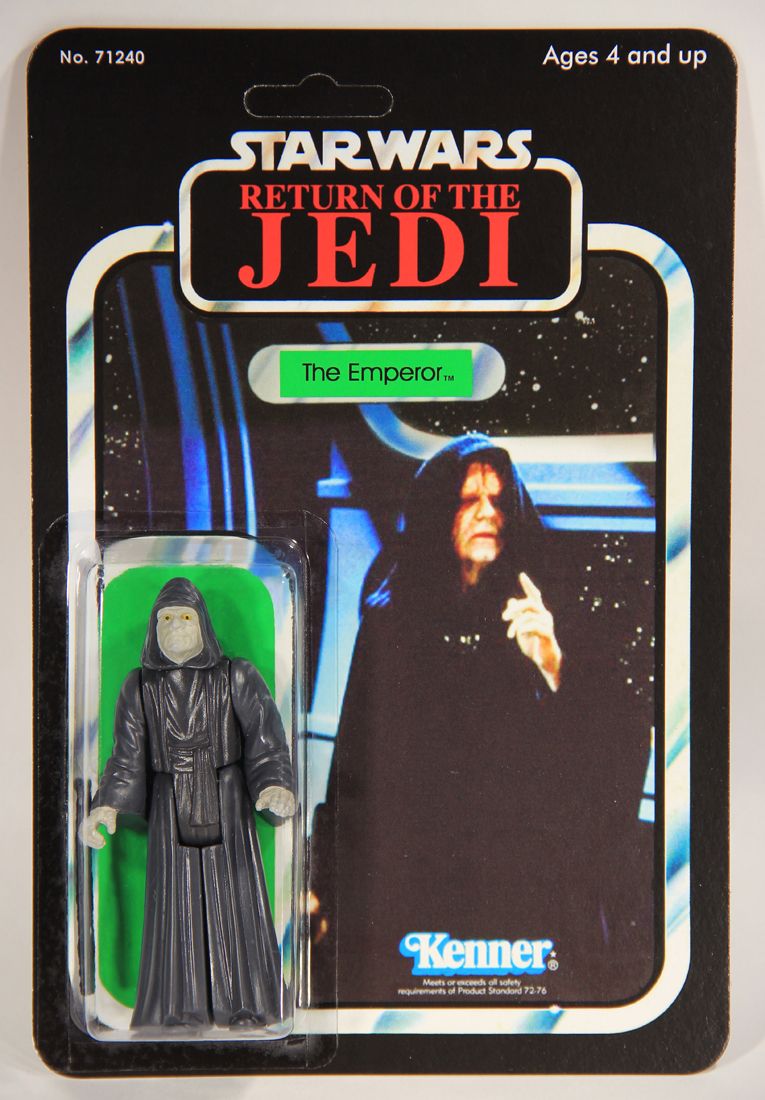 It always bugged me that he looked quite so simple as seen in this picture from Rebelscum.com Archives : 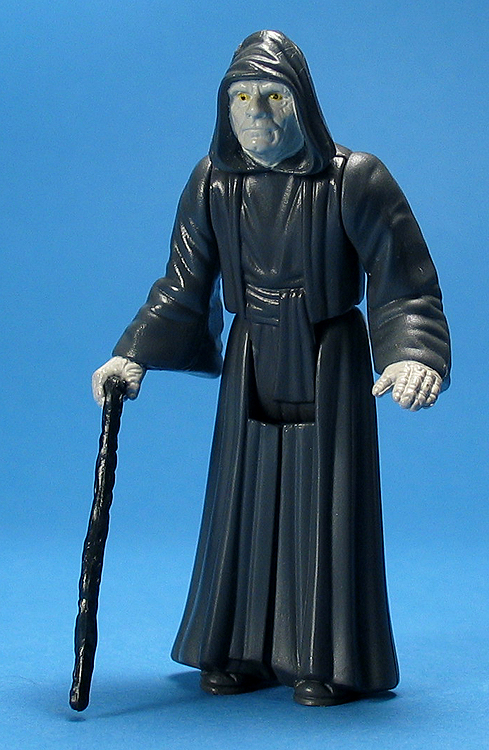 Photograph above by D. Martin Myatt for Rebelscum.com

And before we even knew what the Emperor looked like under the hood, I had taken a stanley knife and went crazy on the robed head. Fully committed to upgrade my action figure with a real robe, just as the little vintage Jawa action figure was given lateron, this was somewhere in the summer of 1984.

Well ever since ... that Emperor action figure has been waiting patiently. Until 2 weeks ago when I finally decided to make that robe and finish the head ... so without further ado I present to you my fully upgraded and operational vintage Emperor from Return of the Jedi : 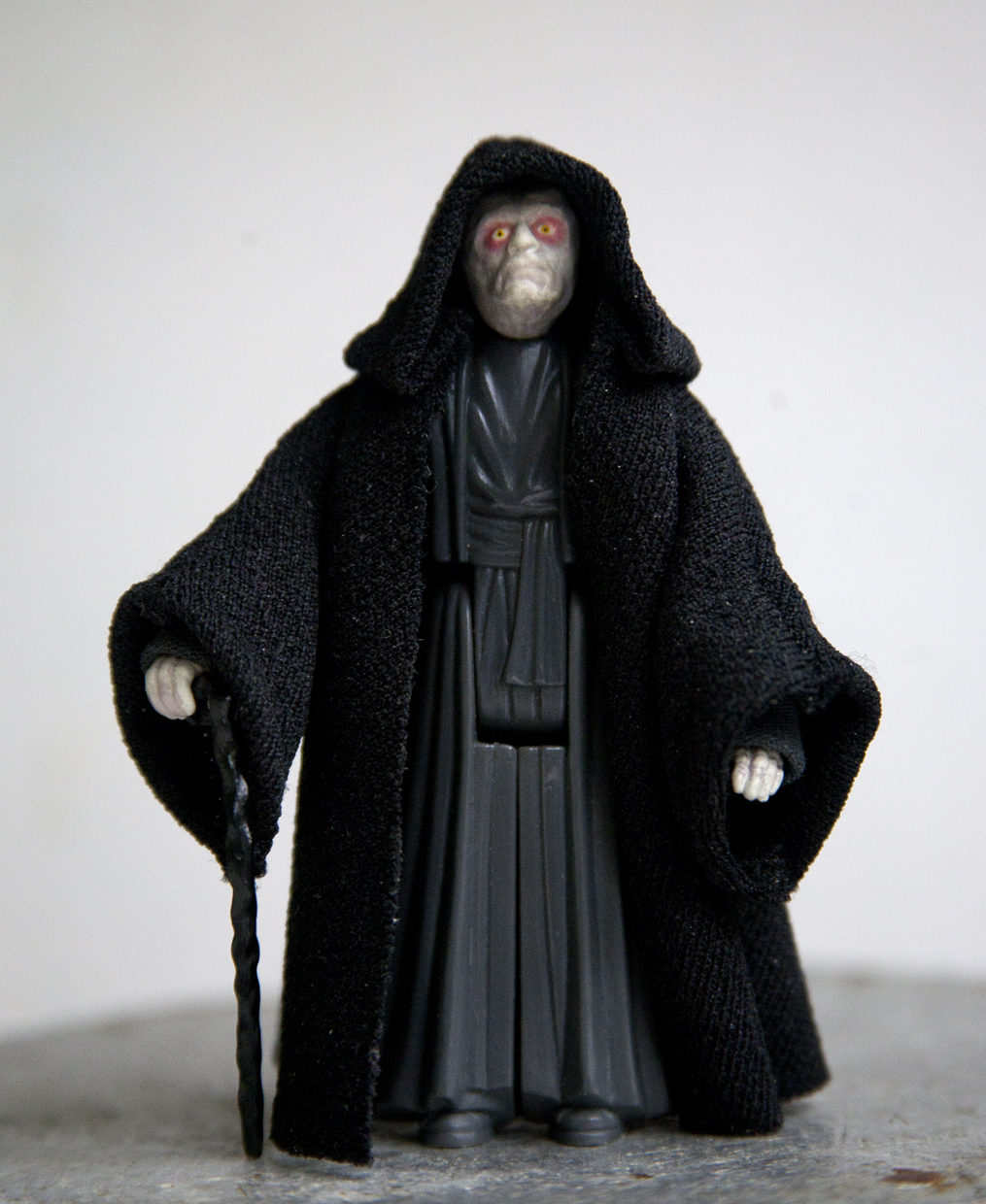 The robe is all handstitched and he's got a full facial make-over, including 2 x a yellow iris with black pupil + added high-gloss over a white eyeball : 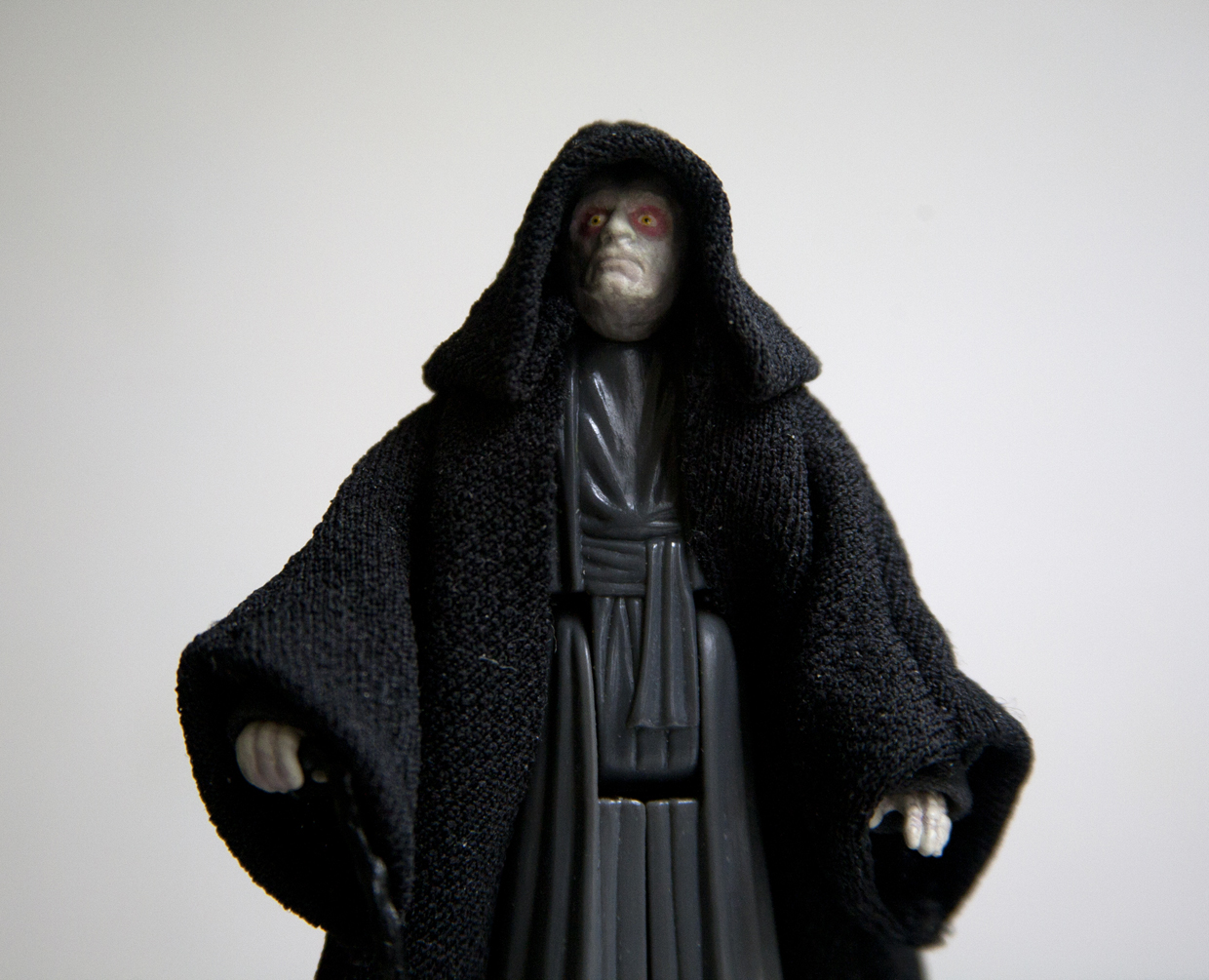 I can tell you that took me several attempts, some cursing and swearing, before being finally content. 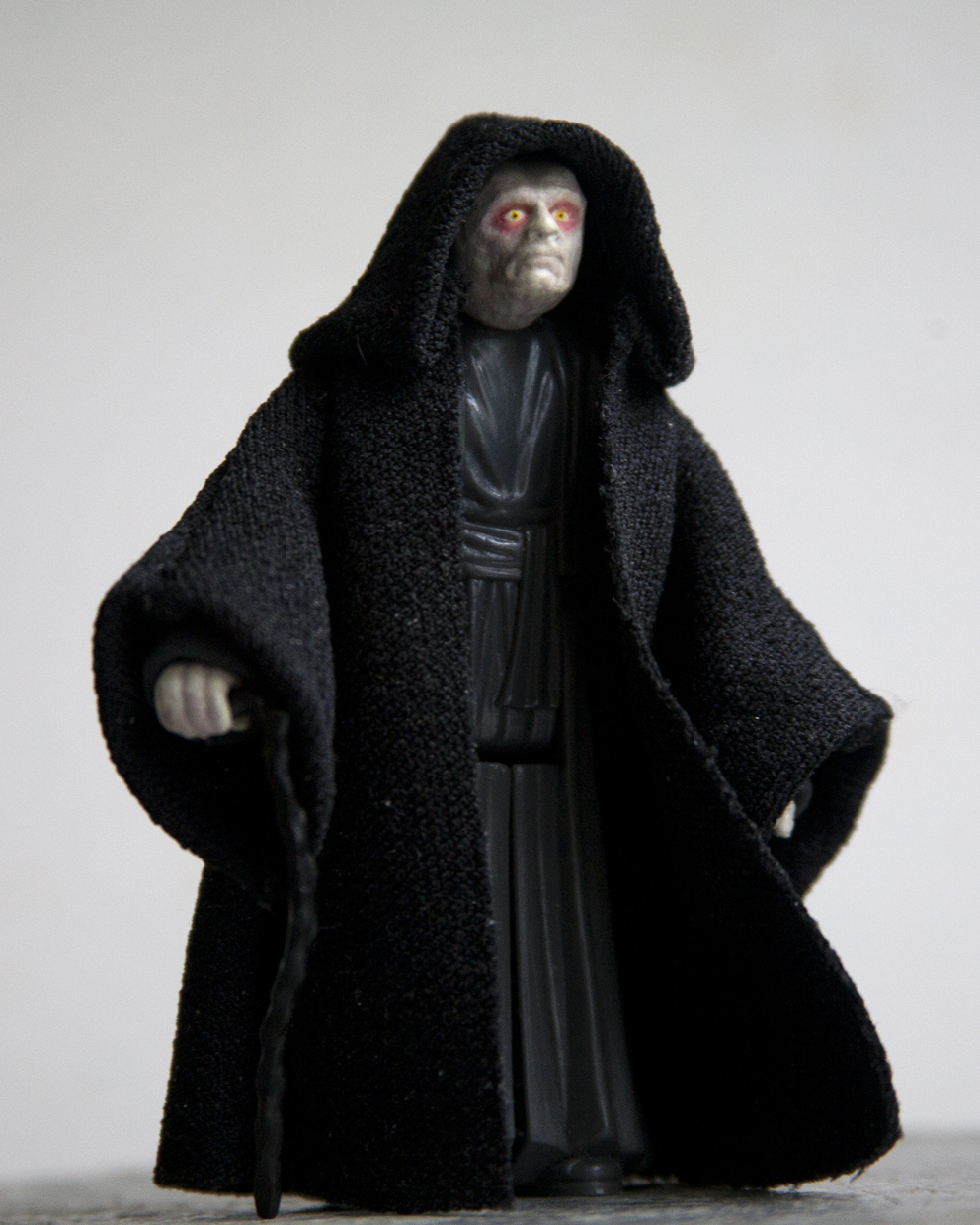 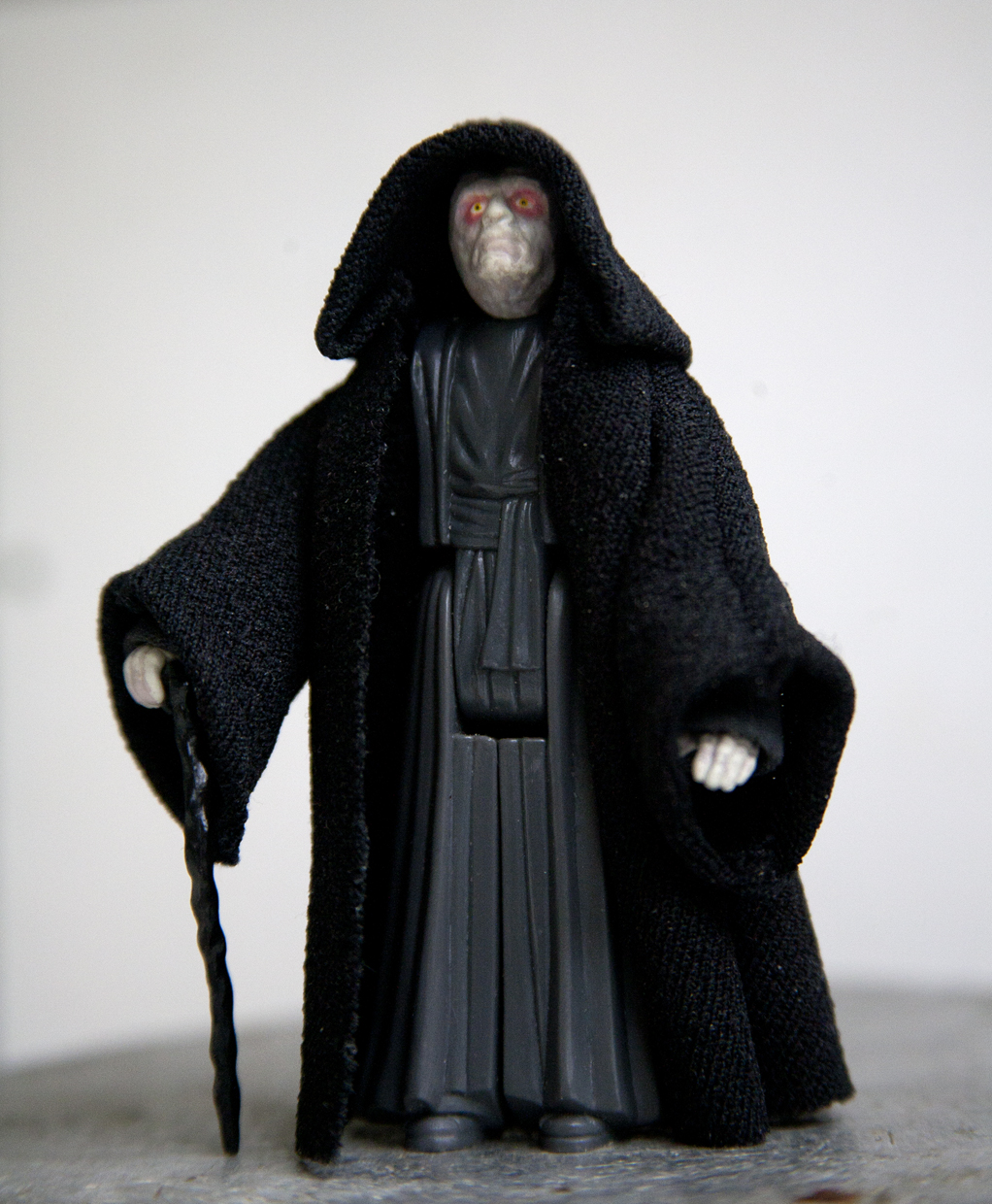 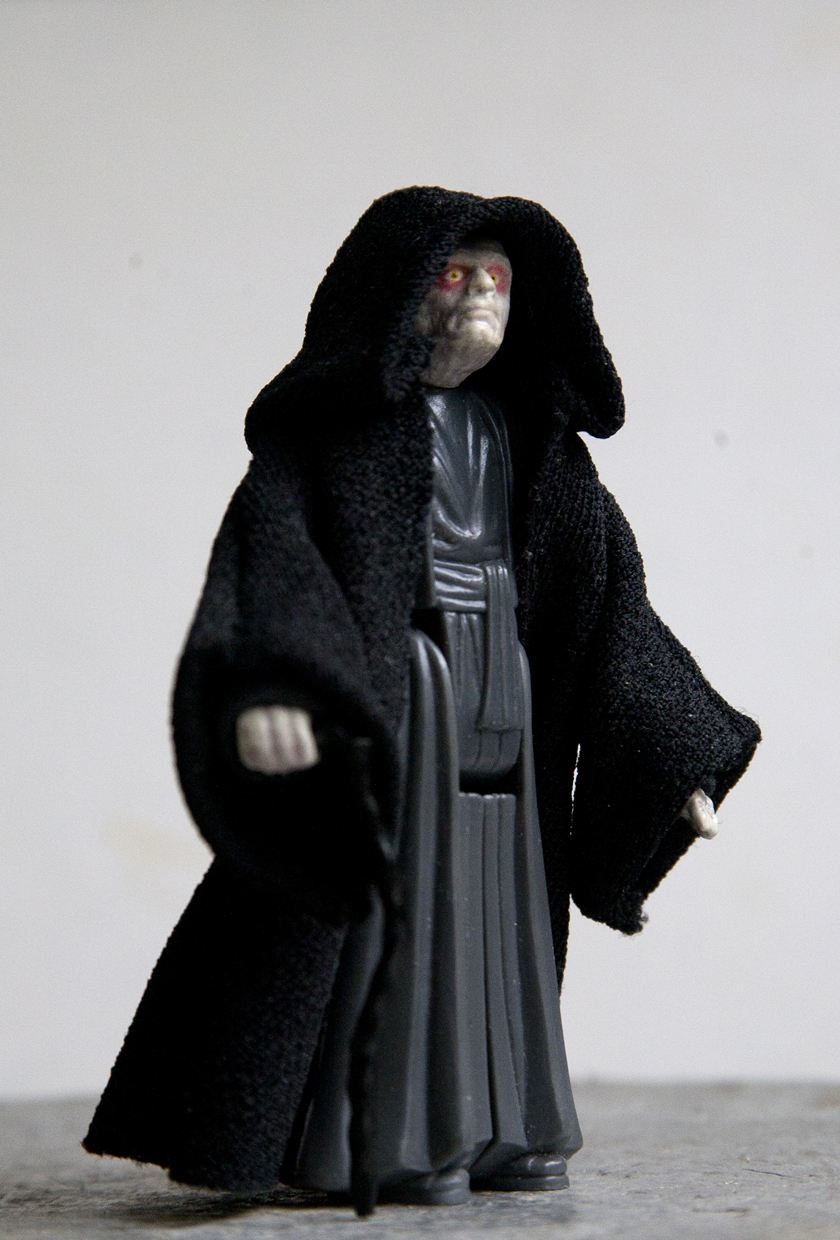 Besides the robe I also had to stitch 2 additional loose grey sleeves since I had cut the plastic ones to pieces and was only left with both hands and wrists, which are now attached to the shoulders via some electrical wire, this also means I can bend them just a little in the elbows. 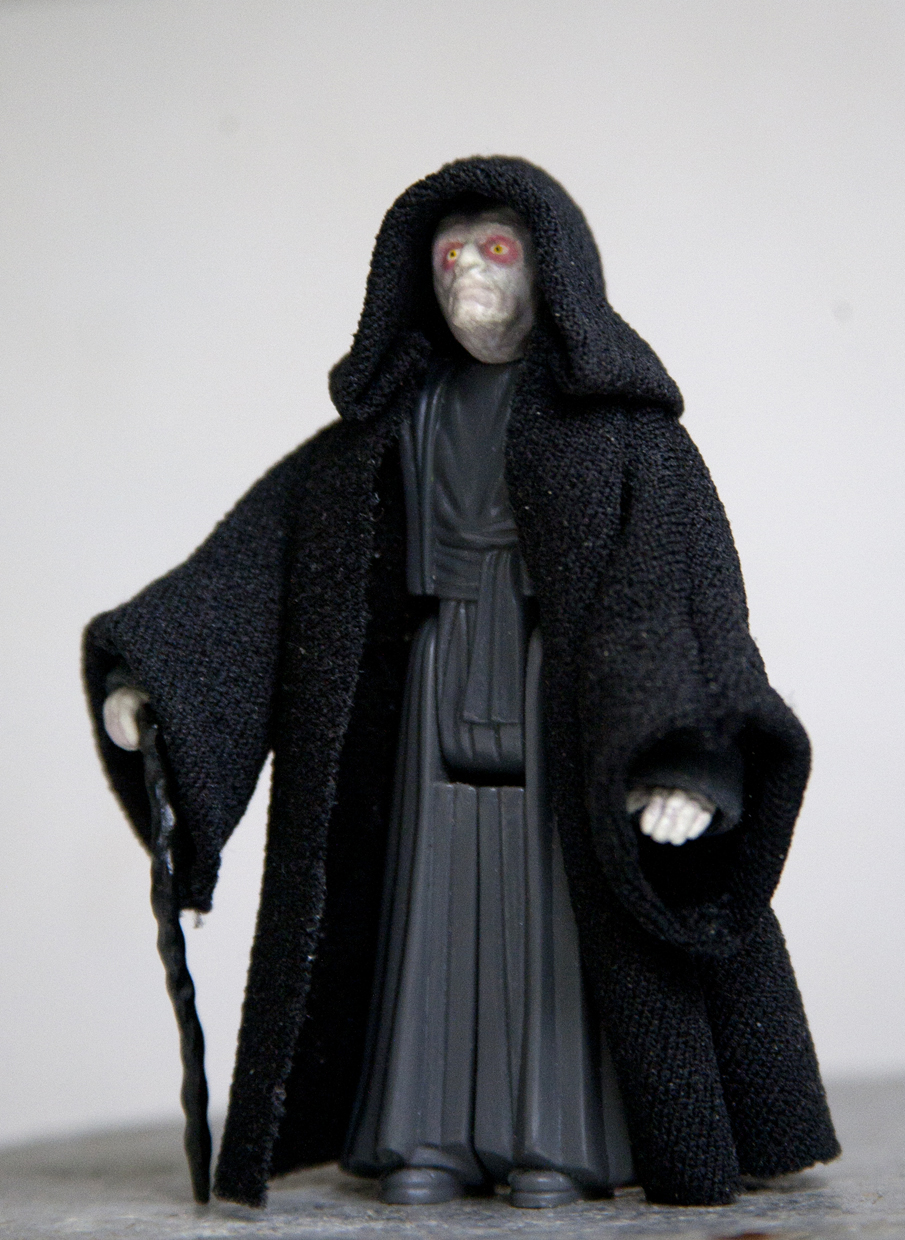 I upgraded the Emperor's cain from another Darth Sidious action figure and also made a tiny clasp, which I'll be adding lateron. 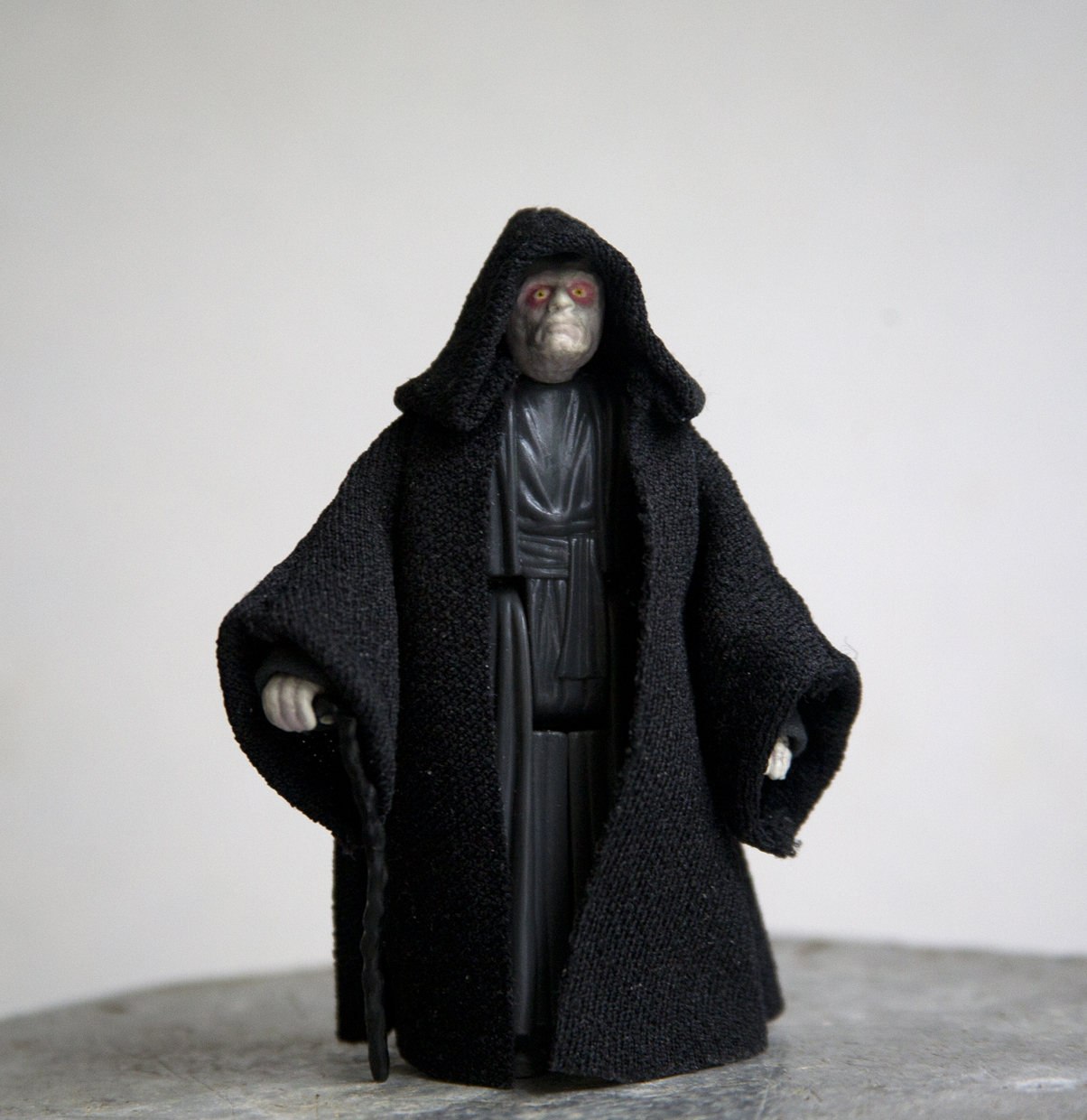 Eventhough in some of these pictures the hood may seem a little to big, in reality it looks quite accurate in recreating the Emperor's robe-costume and pose ... 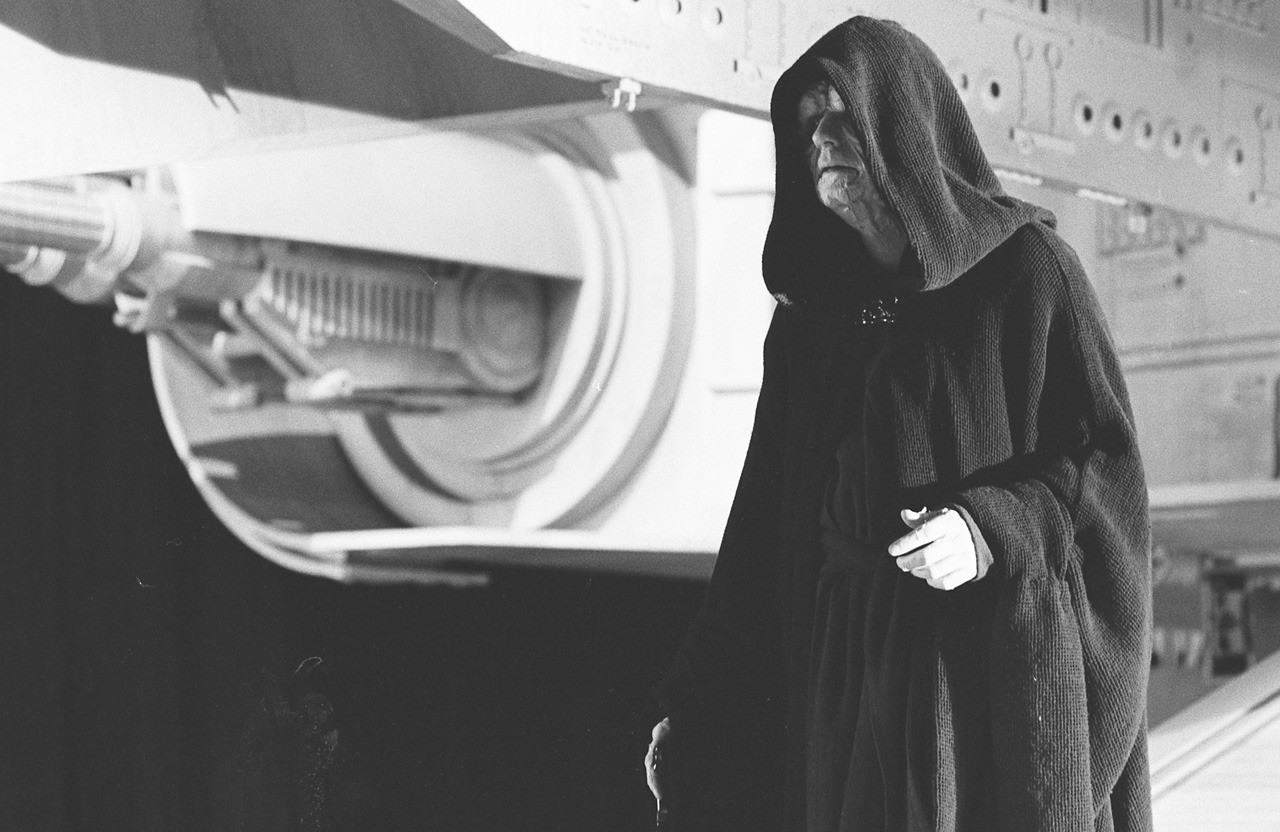 All things considered I'm quite happy with this result and can finally cross this elaborate project off my 'still-to-do'- list ... eventhough it has been almost 40 years in the making.

This looks FANTASTIC Chaïm! I'm right there with you. It always bugged me that they made his plastic robe grey instead of black. I painted my original figure black but never was brave enough to do the cloth robe!

Thanks cking ... yeah I even purchased a second vintage ROTJ Emperor lateron, which was supposed to remain original but when I recently looked into my SW vintage figures box I noticed I had painted his inner robes matt black. So I could not even leave that extra Emperor alone ... many of my original vintage figures have had some sort of 'upgrade' and most of my human characters in their modern variants have their eyes checked by me.

Well cking that cloth robe makes so many more poses possible as you can see here : 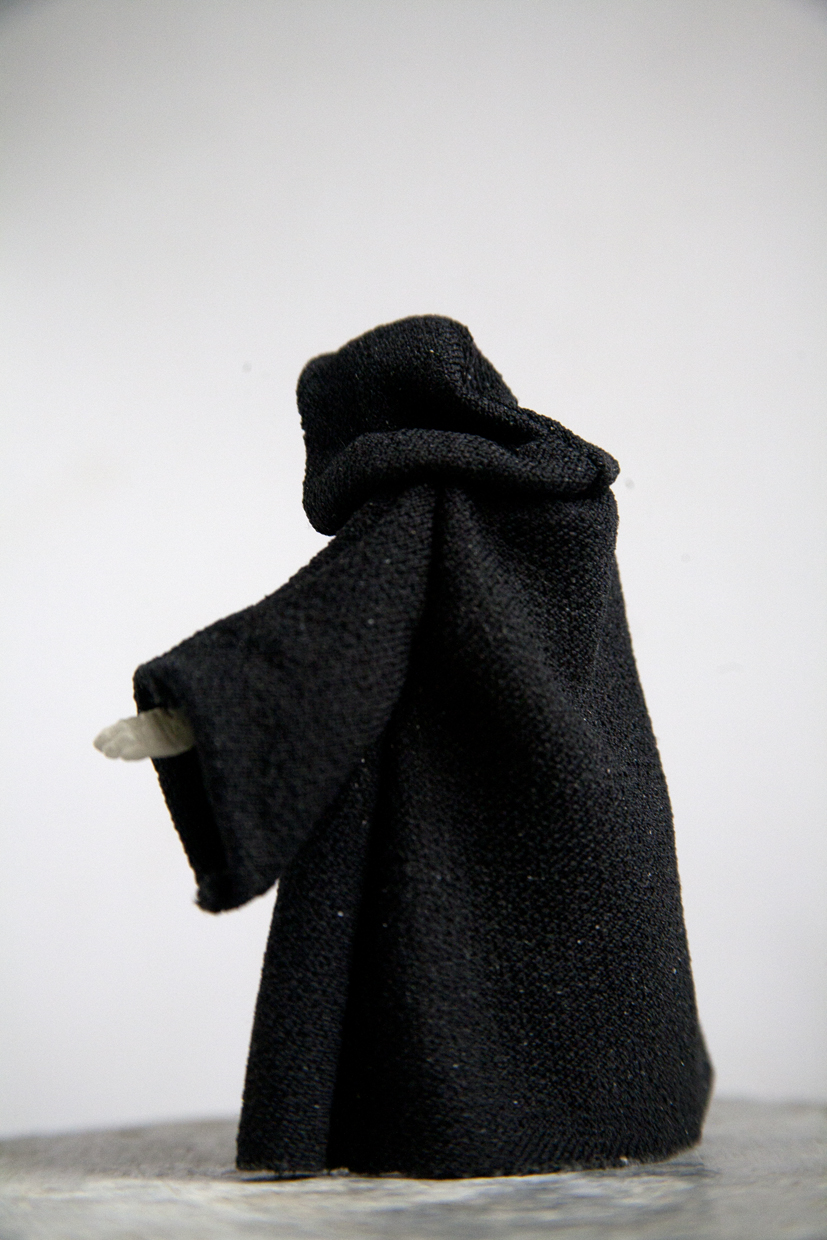 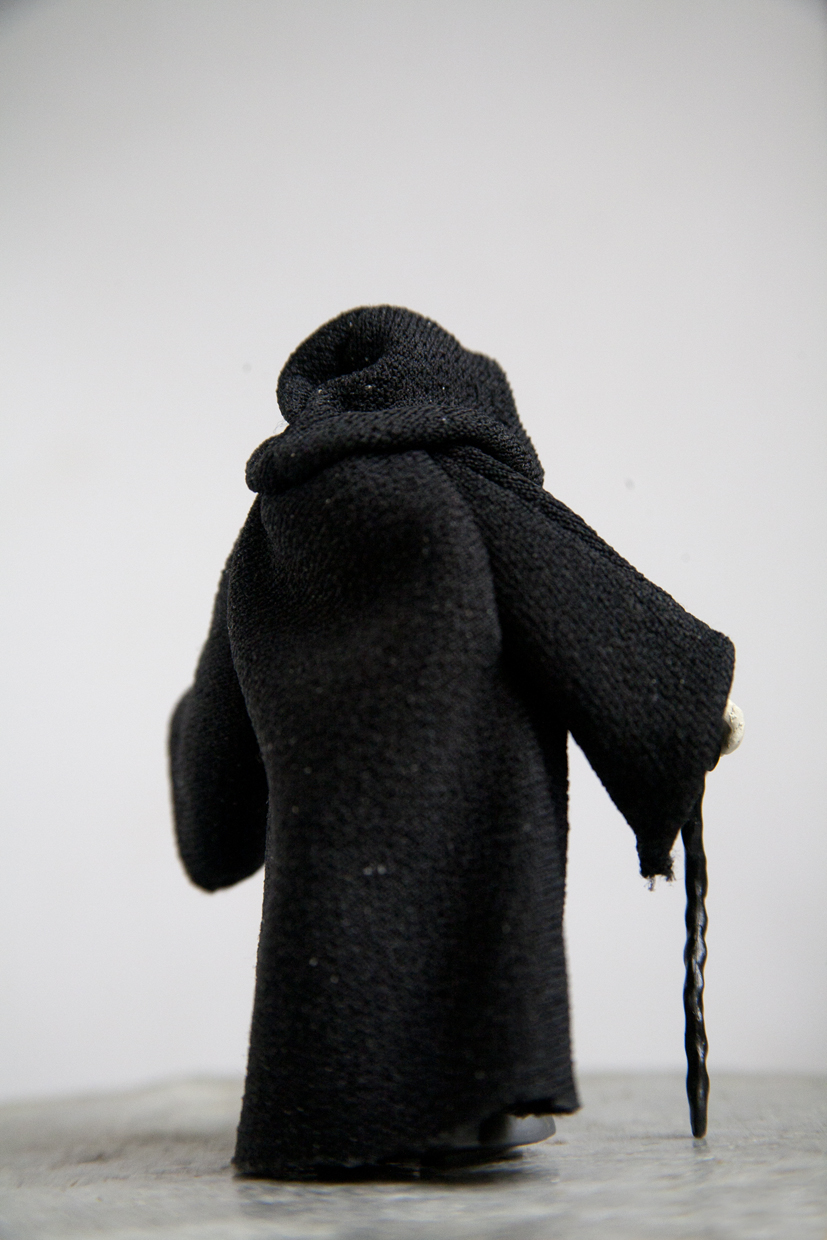 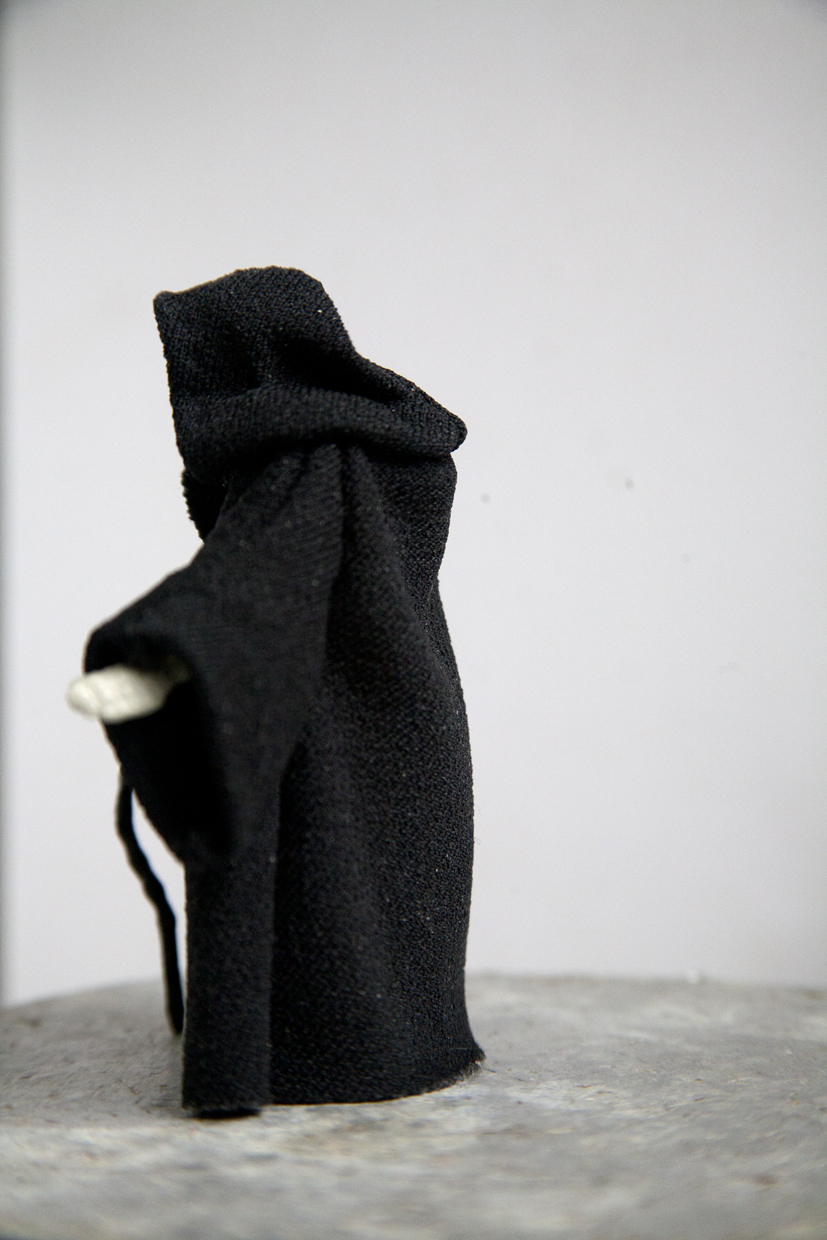 This is a fantastic change! The robe really makes a huge difference to the feel of the figure. Did you happen to make a template for the robe or was it just eyeballed? Great job!

Thanks RModin ... I had a rough idea how to go about making the robe mainly by using other jedi robes as a template but the larger hood and longer black sleeves were made seperately and as you say eyeballed and even slightly altered during the process. I also used a black fabric that did not need to be hemmed on all the edges to avoid coming apart, and I did fold it on the front edge of the hood partly inwards to recreate that specific look as seen in the reference pictures of the Emperor from the movie. Mind you the plastic hood of the vintage figure has been cut away, as are the original shoulders.

RPF PREMIUM MEMBER
Love it! Great work! The Emperor was always the least interesting "action figure" to me, the modification really adds to the character. He could have been easily confused with Mumm-Ra in the original outfit.

The problem with the cloth robe is the same with almost all cloth outfits on 3 3/4 figs, the thickness. I guess only something similar to silk would be thin enough. What cloth did you use? Synthetic or a wool yarn?

Excellent work! Night and day difference. So much better looking.

stussy thank you very much

DaddyfromNaboo thanks ... yeah you're quite right about the thickness, I don't know exactly what I used, it was a piece of scrap black fabric and eventhough it was rather thin, when you start sewing it together, even with tiny stitches by hand, it becomes thicker soon enough ... I also used part of an old T-shirt fabric for the grey inner sleeves which is even thinner and works quite well for 3 3/4" figures but by then I already had started work on the black fabric and didn't want to start over.

For some other Star Wars 3 3/4" figures i.e. Sidious and Vader they do use something similar as silk (see picture below) : 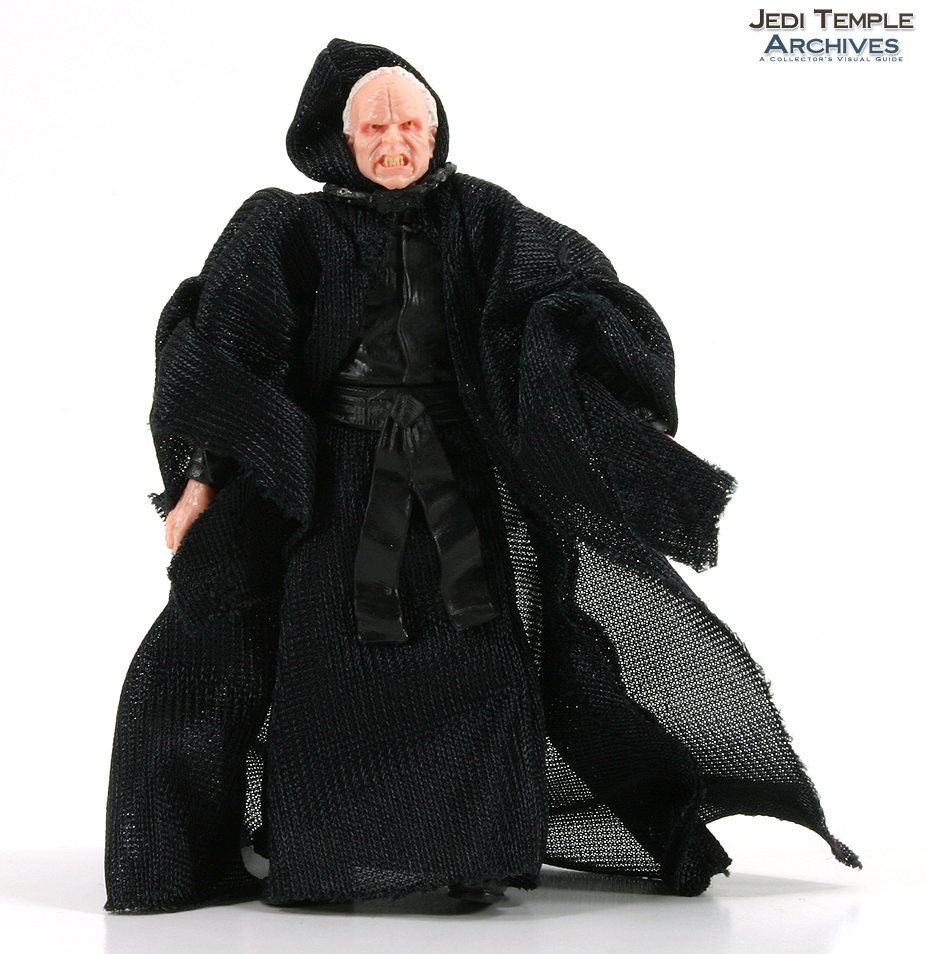 Photography by Paul Harrison 2012 for jeditemplearchives.com

Yet at times I find that fabric to much 'see-through' and flimsy, hence I also chose a slightly thicker fabric for my Emperor project.

ShortWookie Thanks ... I agree ... every time I look at my vintage ROTJ Emperor figure now, I leave the room with a huge smile

JazzInc. Collectibles - vehicles, dioramas. What do we think of their products?