So I've been working on this saber, or versions of it, on and off since I was 7. I got my first real graflex in high school and have been tinkering ever since, sometimes not touching it for a few years at a time, and a few years ago the NBV3 stopped working properly so it sat in the shelf broken. Since then I found a couple of local graflex flashes and cameras, and found myself in the possession of parts I hadn't had before.

Using Graflexbank and various other resources, I matched one of my flashes to the hero saber, thin lip Folmer patent with Folmer glass eye with a slight flat spot on the edge. The flash is classic Folmer in that it has a more shiny finish with chrome bunny ears and clamp. So I decided to redo the chassis I had built a few years before. Unfortunately in the process most of it got knackered, but I'll get to that.

The original updated build is here, where you can see more process oriented shots of what I did. This one was done a lot more 'off the cuff' and I designed the parts as I went in my head, so there's not much to show vis a vis blueprints or design work. Graflex Rebuild WIP

Anyway, the reason I wanted to do this upgraded project is that I wanted the graflex to look as perfect and unmodified as possible from the outside (And I cant forge right now, so may as well do something constructive). I was using a graflex shop adapter from the early years, so it wasn't anything resembling accurate. But that inspired me to just take the graflex innards and machine them to accept a 3/4 inch blade and retain the look of the vintage parts and the lip. I had some space to make up as the graflex innards are much less long than the old blade holder, so I made some cooling fin type details so the blade would shine through them when the chassis is out of the shell. 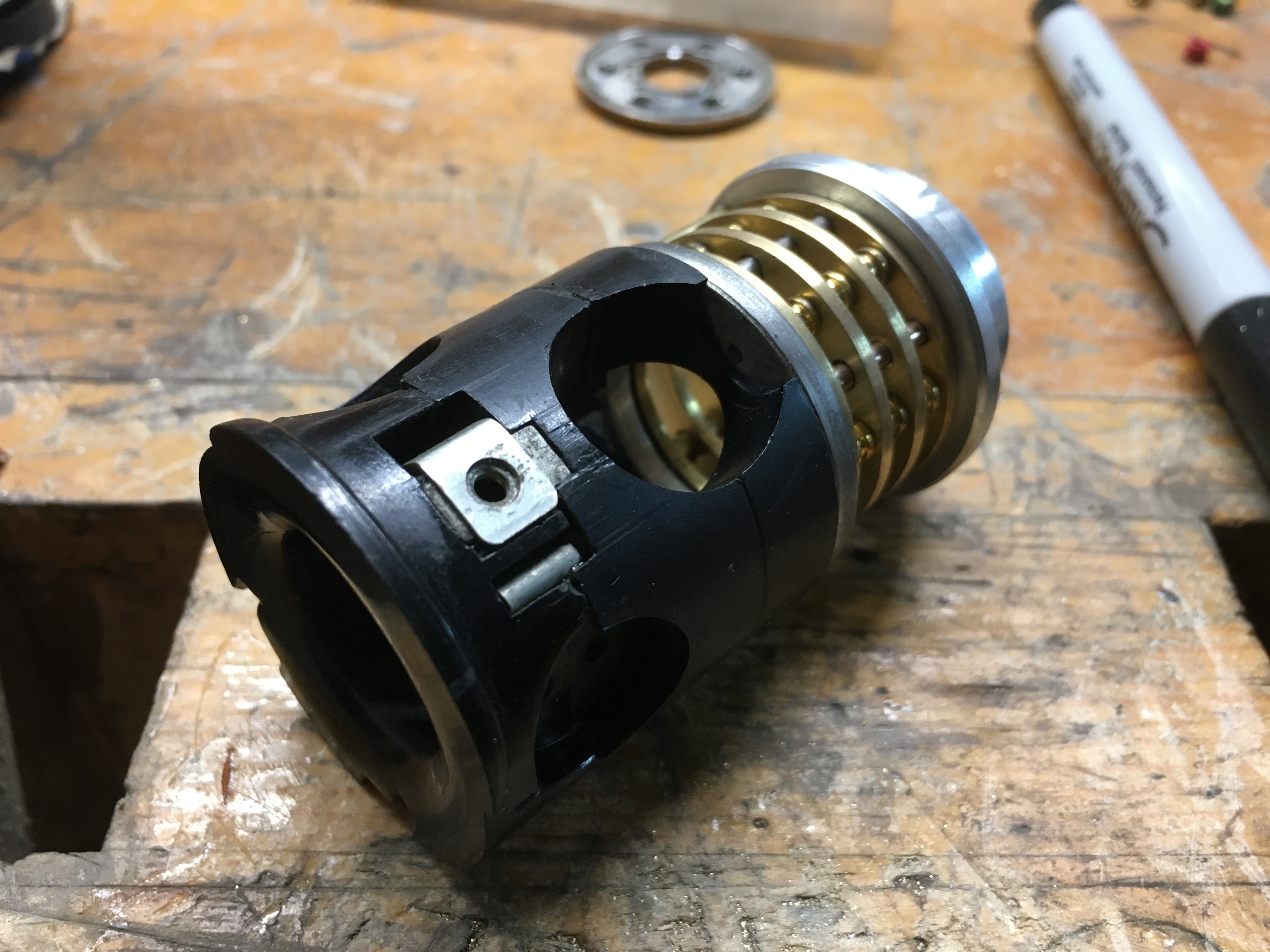 Next was turning down the old battery can by about .002'' as the new graflex shell was slightly smaller ID than the old one, and the new chassis would have to be loaded in from the top, so it needed to fit by the beer tab rivet and whatever other parts protrude. 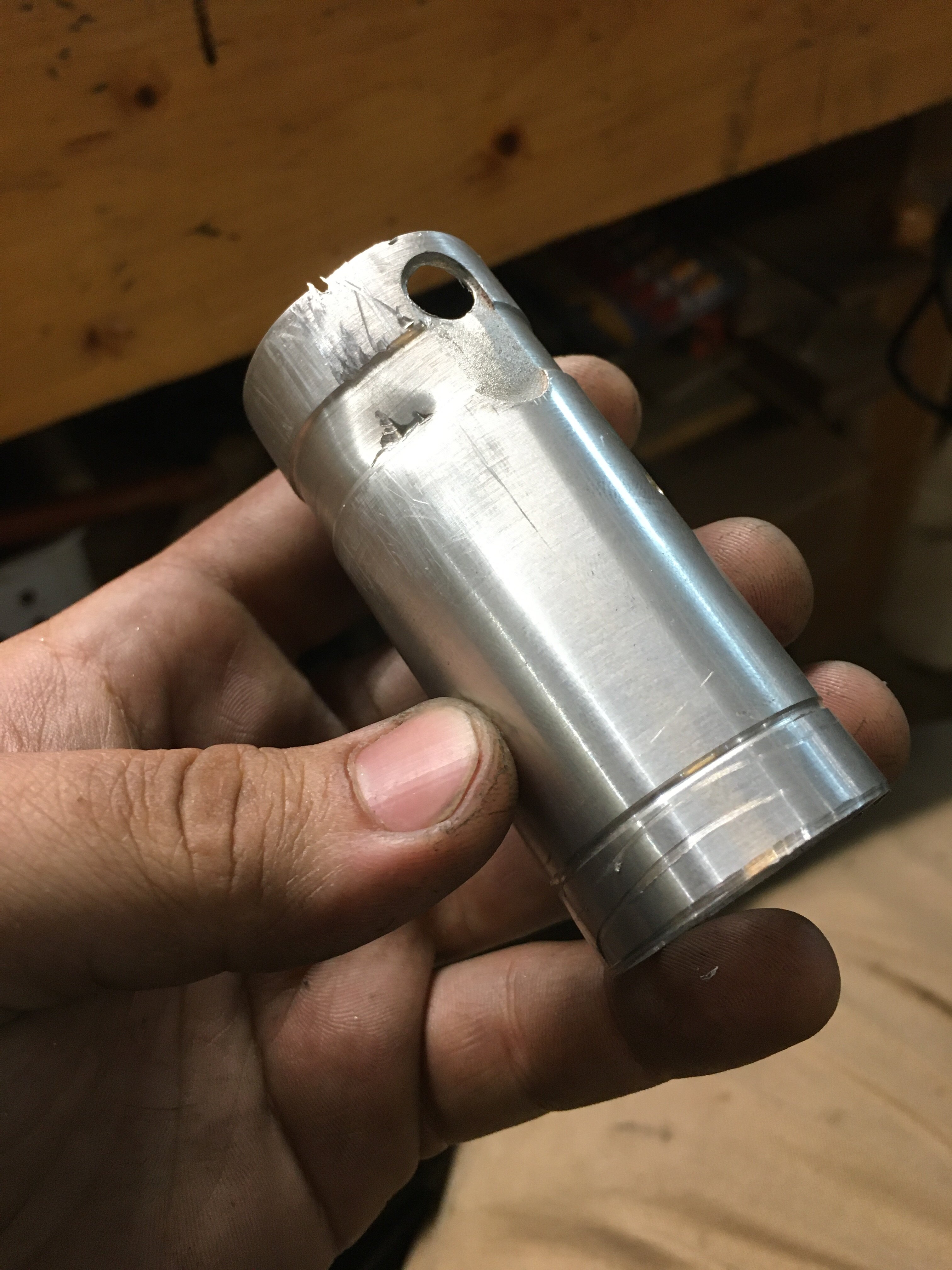 This is when things went to hell! Despite having my feeds and speeds sorted, my cutter had a small bit of gummed aluminum left on it, and it caught, which then caused the canister to get beaten in by the lathe jaws and the internals were destroyed. I was crushed (as was the canister) so it was time to order some new aluminum pipe and start over.

So when a few days went by and the material came in, I machined a new canister which looks much better and took far less time than before! 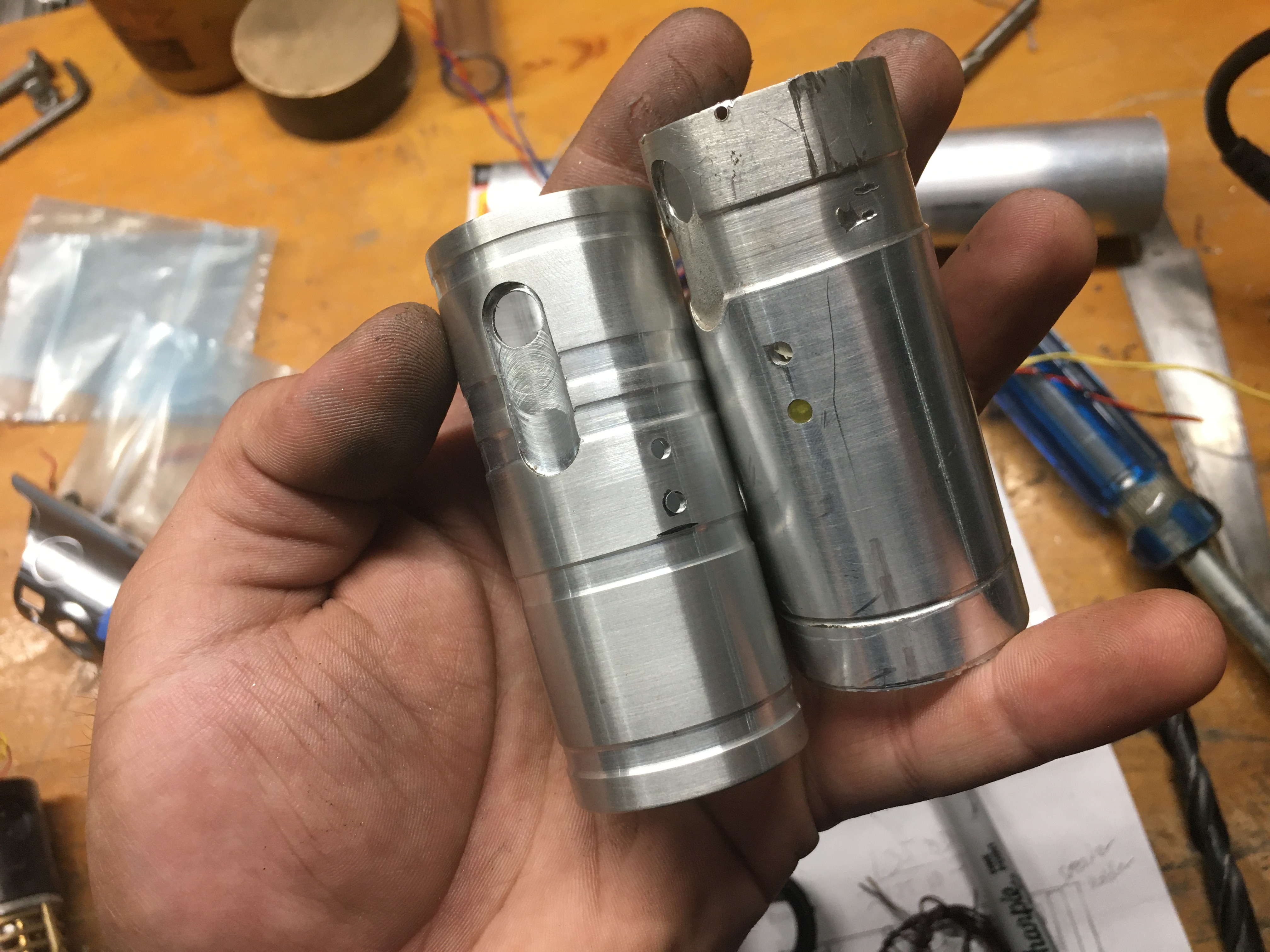 With that out of the way, it was time to start figuring out the rest. 2 steps forward, 20 steps back, and now 10 forward again. I began the new wiring using the same NBV3, turns out it was fine even after the fateful explosion. Here's a shot of my bench. Usually devoted to blade related things it was nice to switch gears! 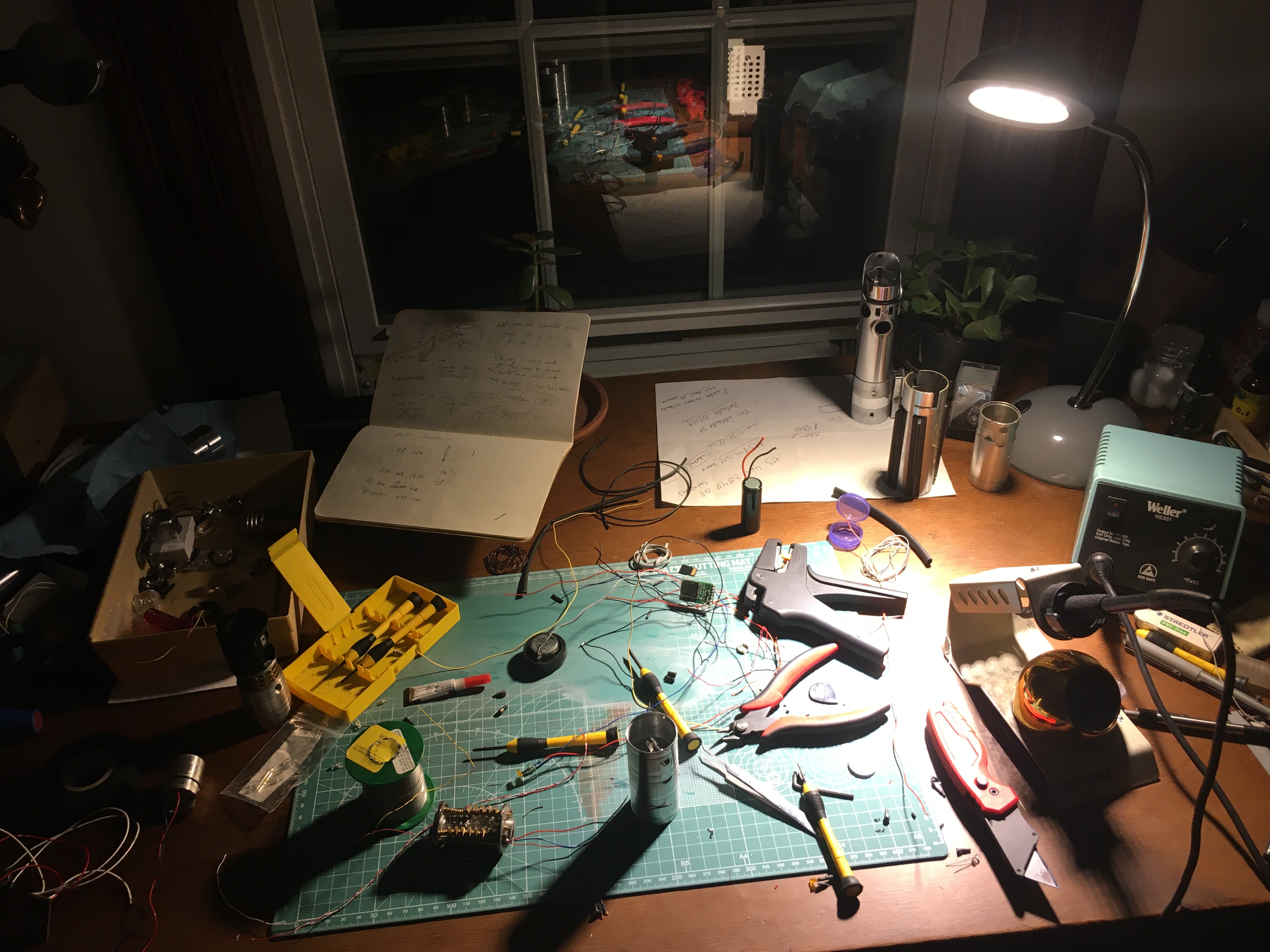 After a Saturday of work, we were here: 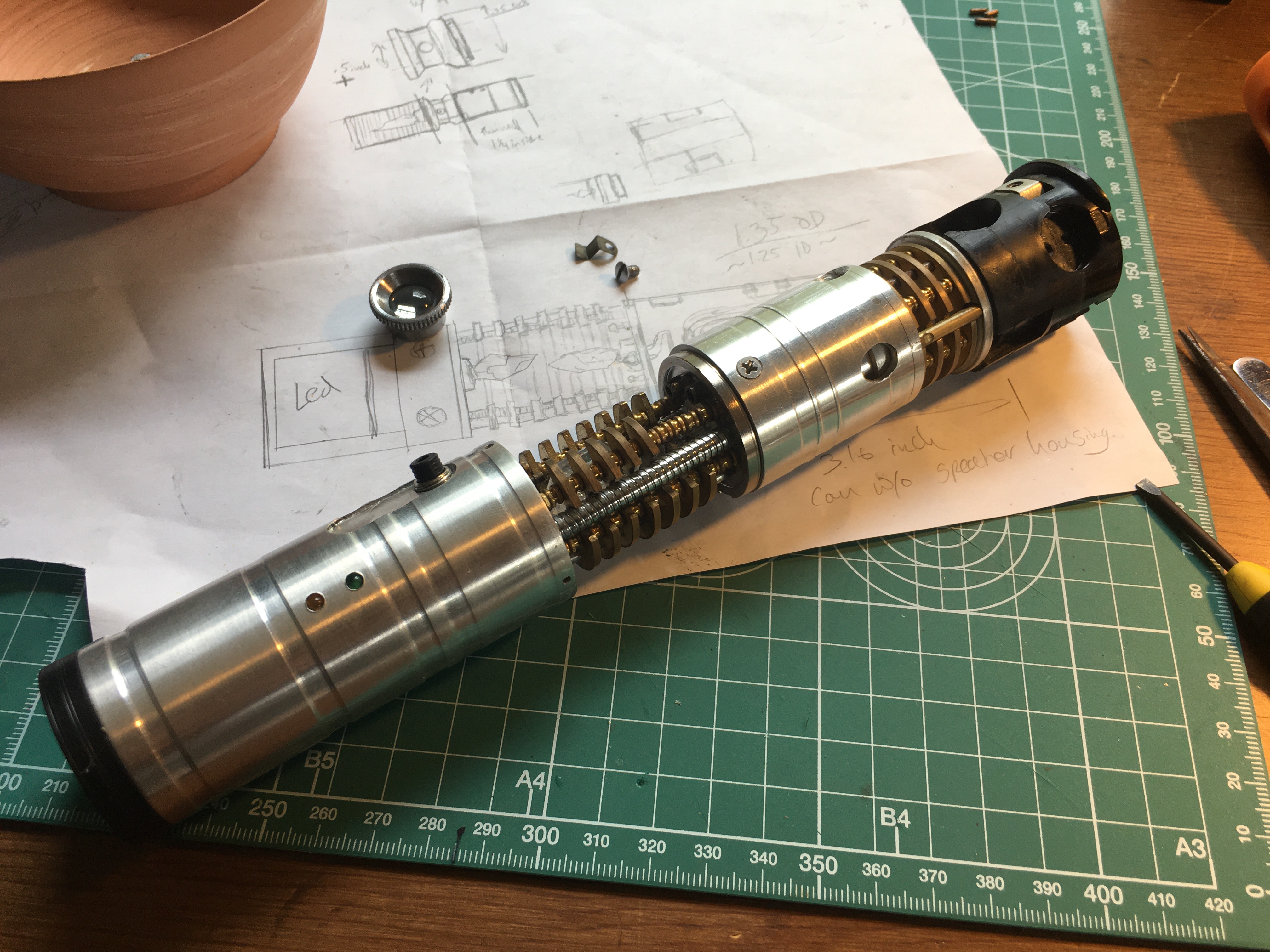 Newly machined speaker holder, fit to the canister and the status LEDs, the 18500 battery, recharge port, chamber LEDs and blade LED all soldered, fit, tucked, and secured. Underneath you can see a drawing I made after the lathe incident to make sure the spacing of the new parts would be correct.
This brings me to possibly my favorite thing about the idea of working with the original innards. I've seen loads of people make these sabers, and no matter how accurate or close, I've always seen them stick a momentary switch below the red button. I wanted this to be even 'closer' to how a graflex works. So I took some short pins from TCSS and wired them to the activation on the board. When you press the red button down, the circuit is actually closed by the metal plunger on the red button, and it activates the saber 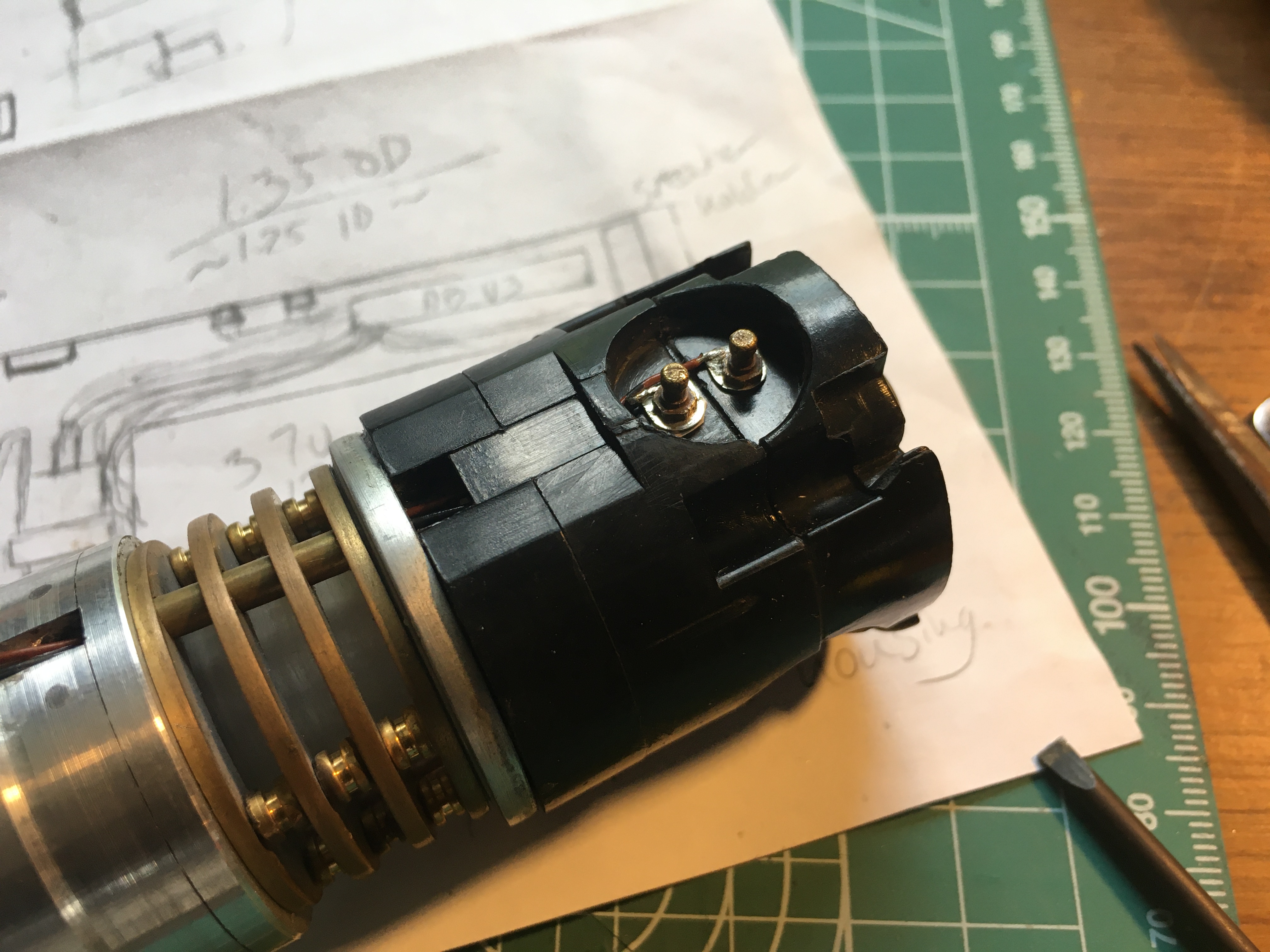 So anyway, here was have old versus new: 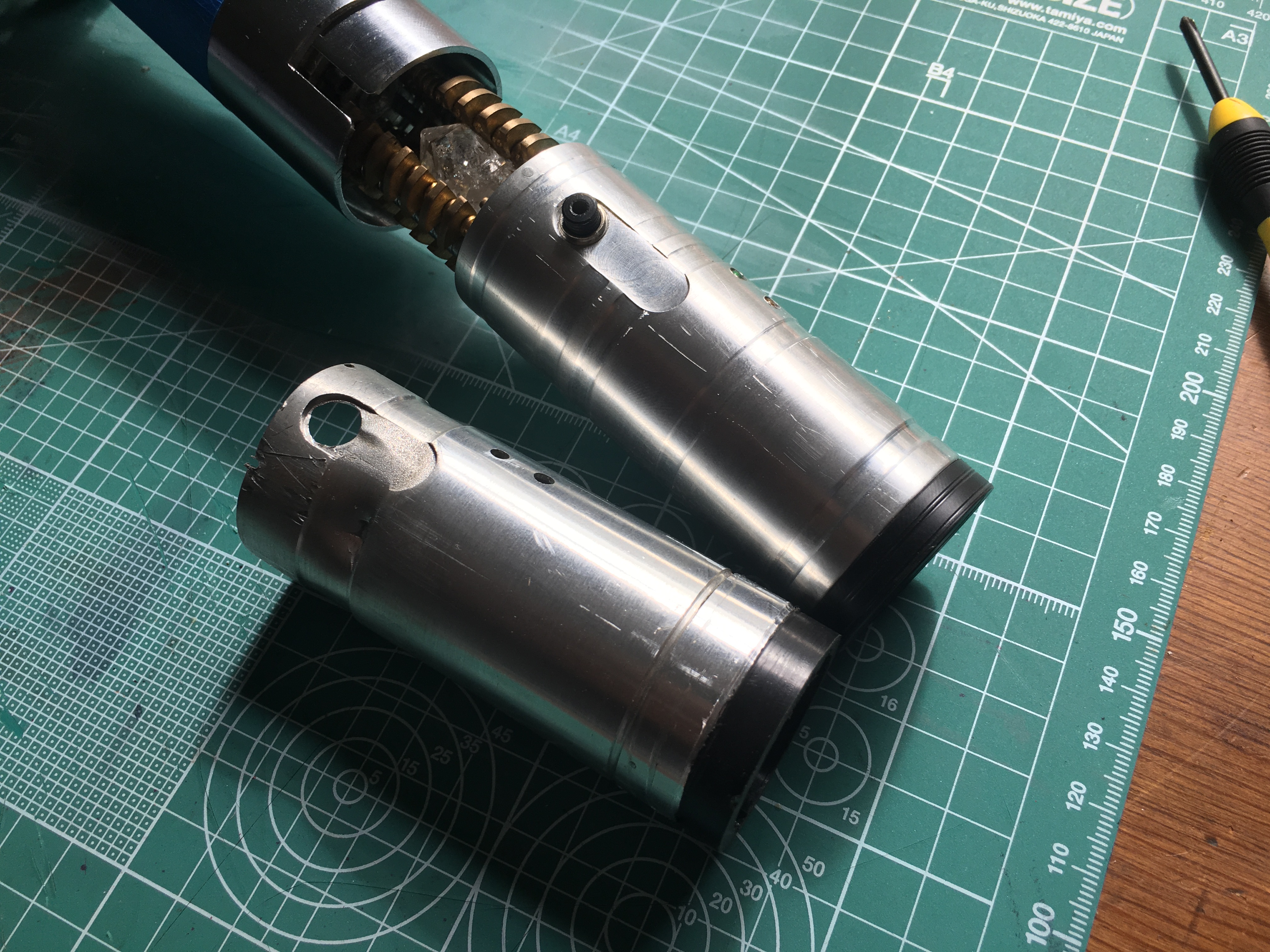 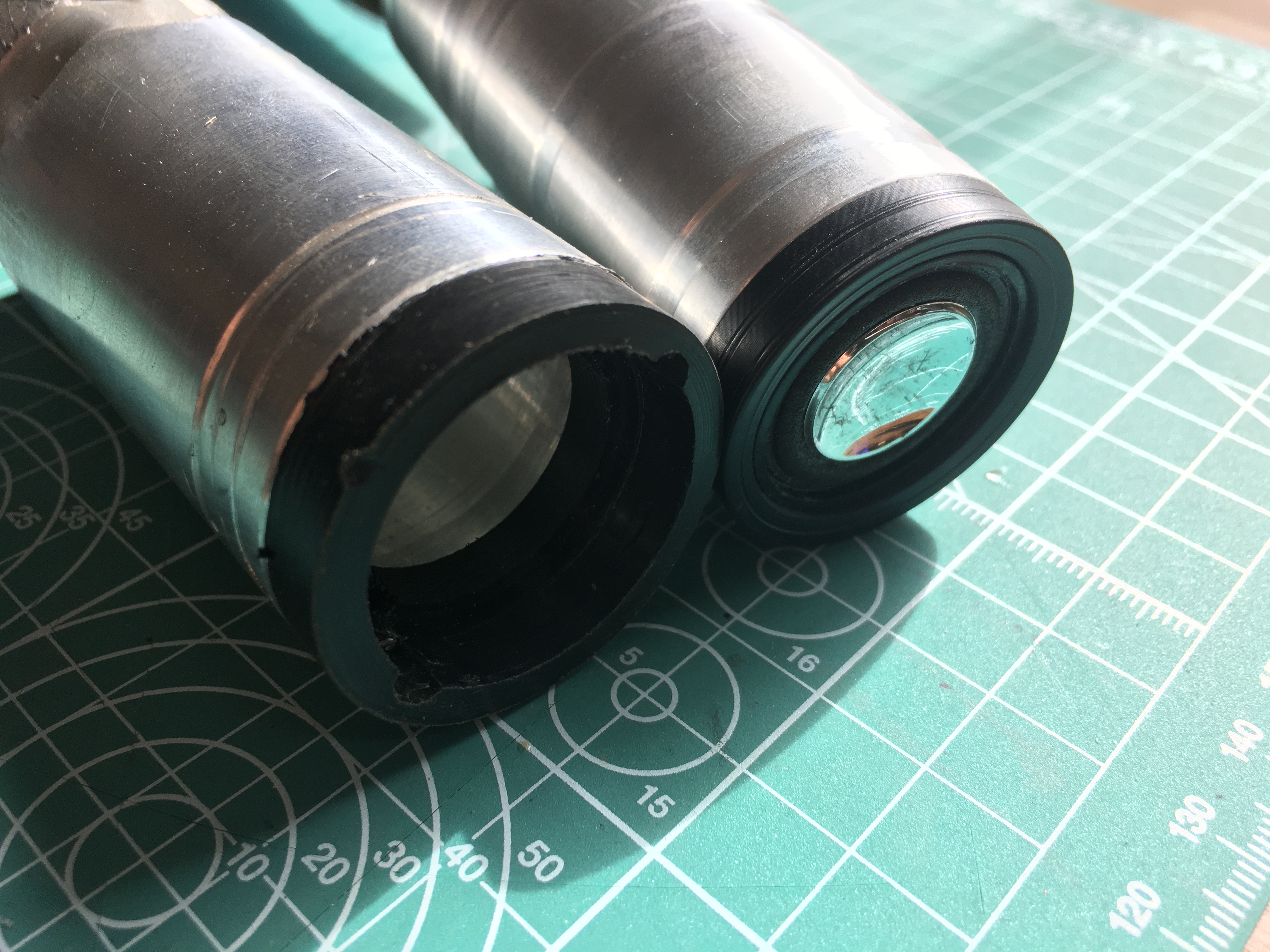 This pretty much brings us to the finish line. I slid the chassis inside the graflex shell, installed the various pins and screws, plus the bunny ears, and we were off to the races! I still have to install a D ring, and make a new blade plug for the smaller diameter holder, but this project is basically finished. The grips are vintage tracks, and the bubble strip is from an exactra 19. I'm happy to have this thing finished finally, and to have a nice accurate looking display piece, with some hidden details. Now more than ever I'm happy with the accuracy of what I've built, and with a custom chamber too! Can't complain about that. Anyway, here's a picture dump, hope you guys have enjoyed! 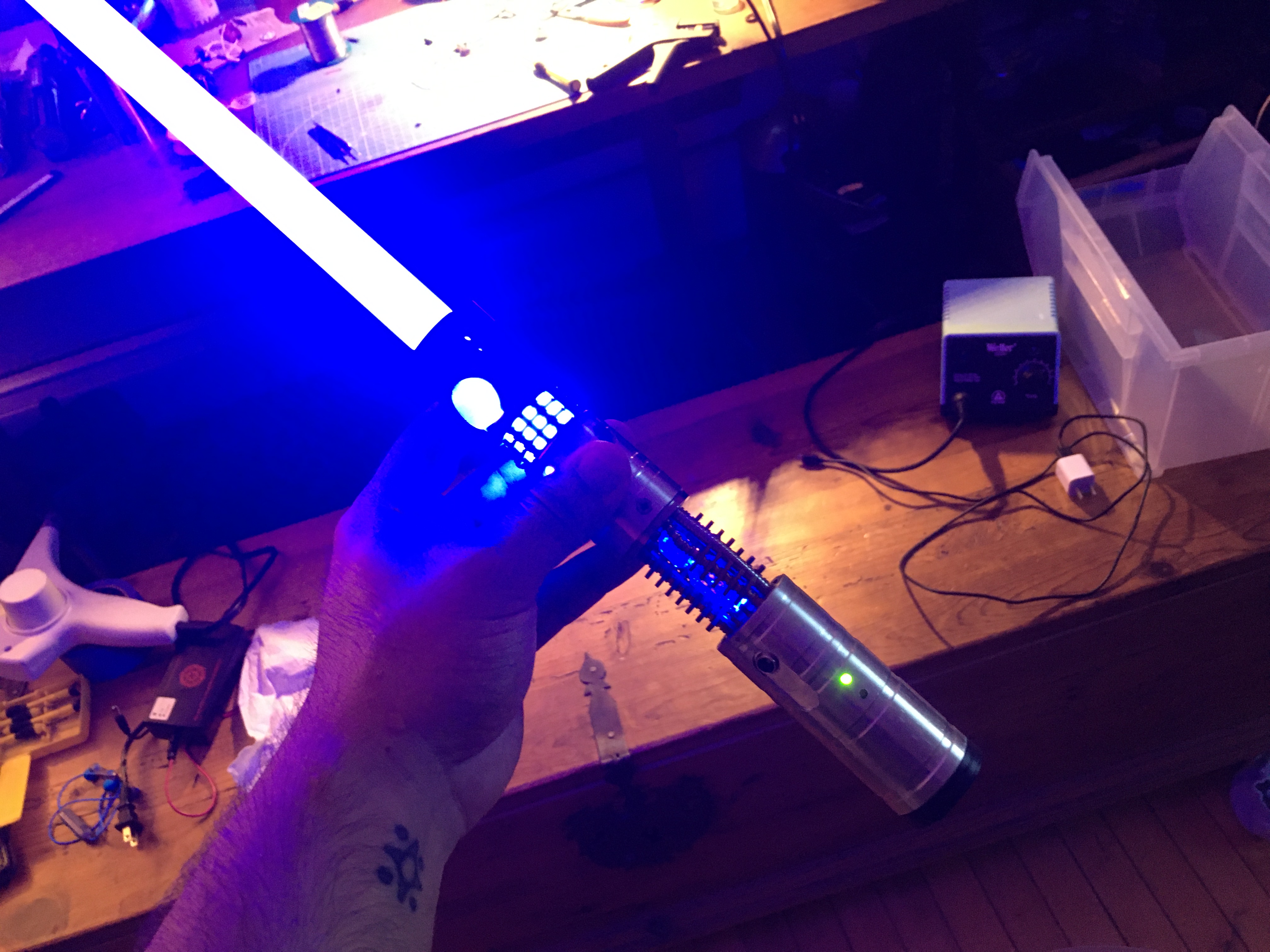 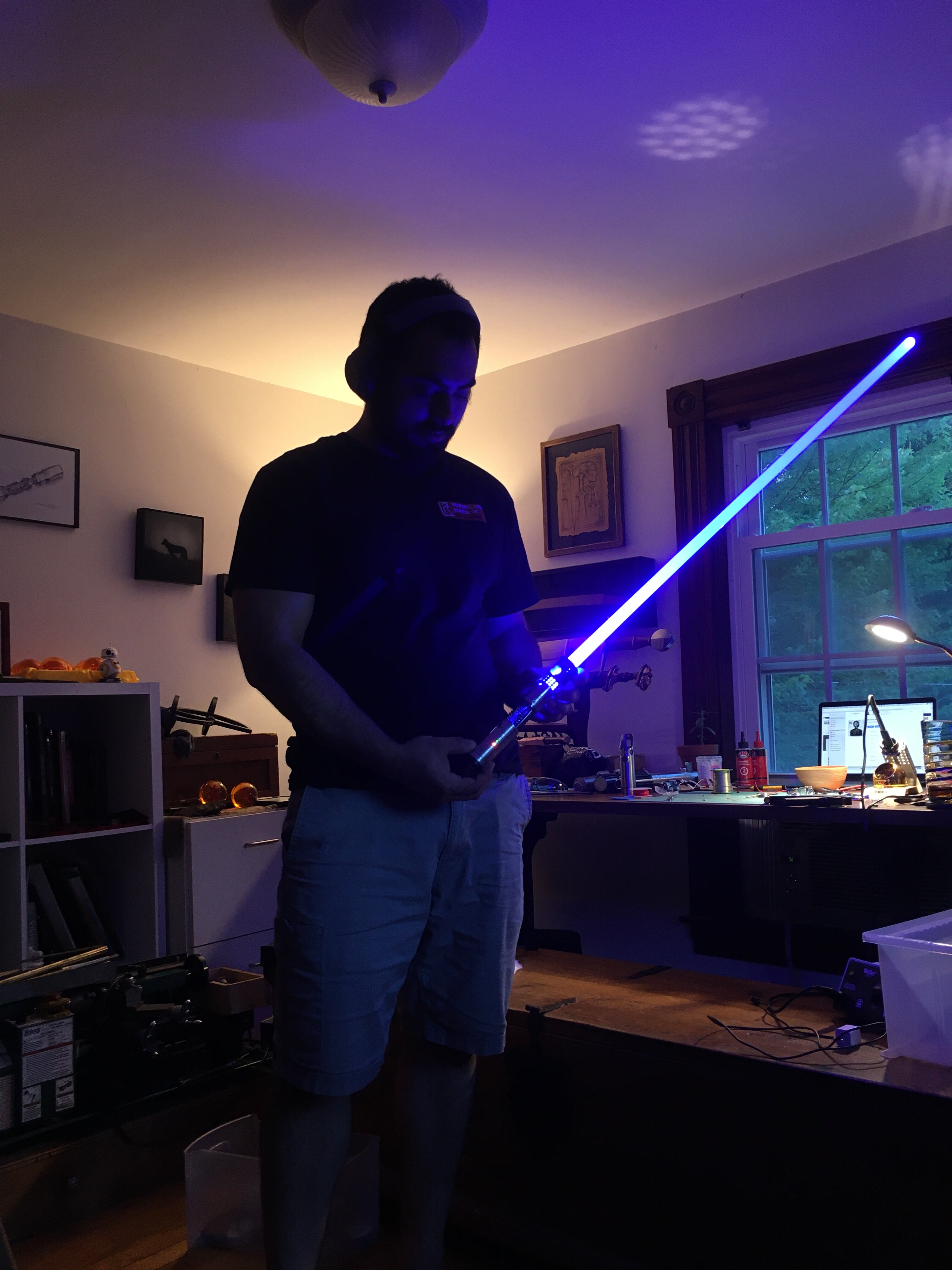 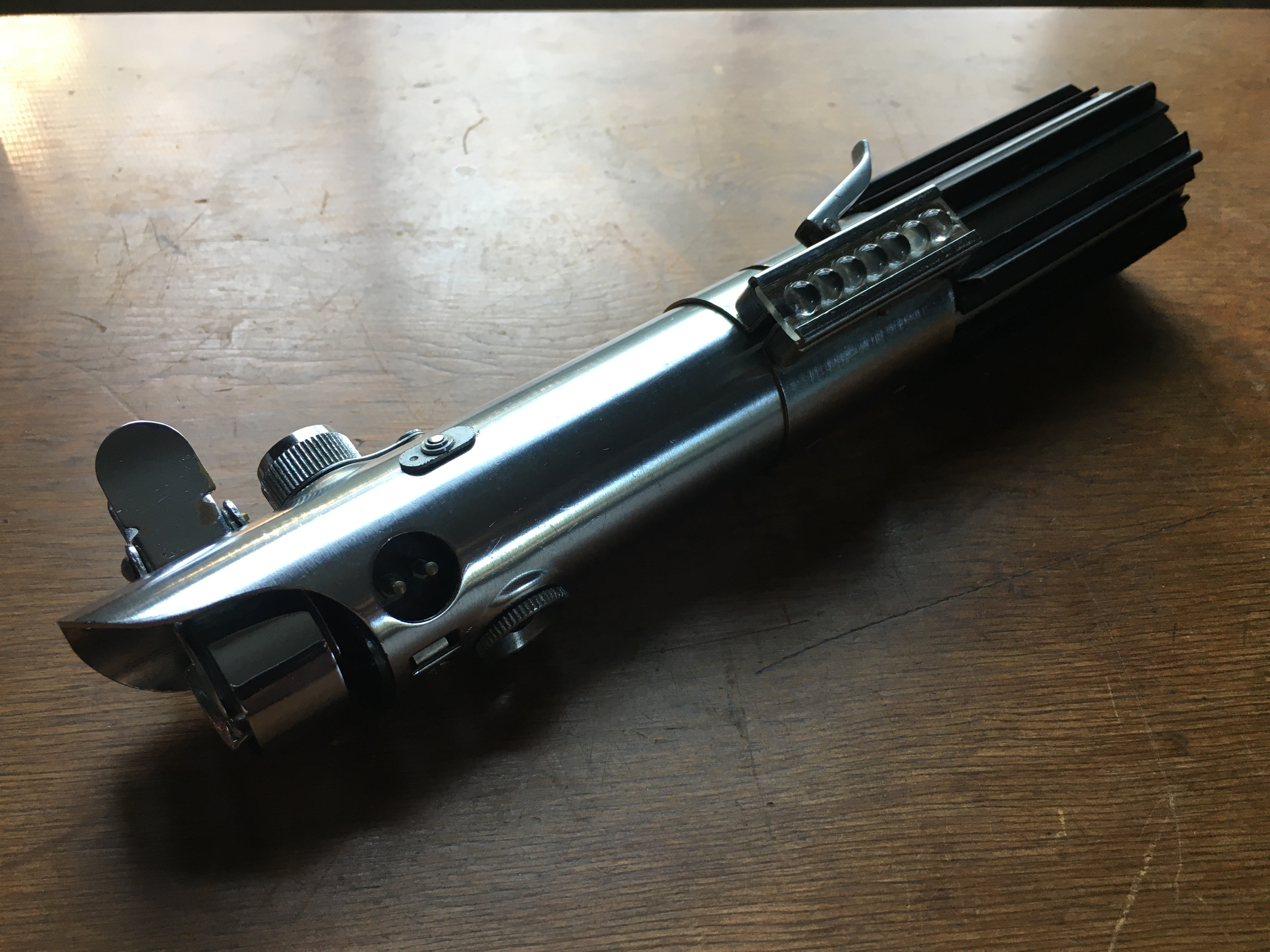 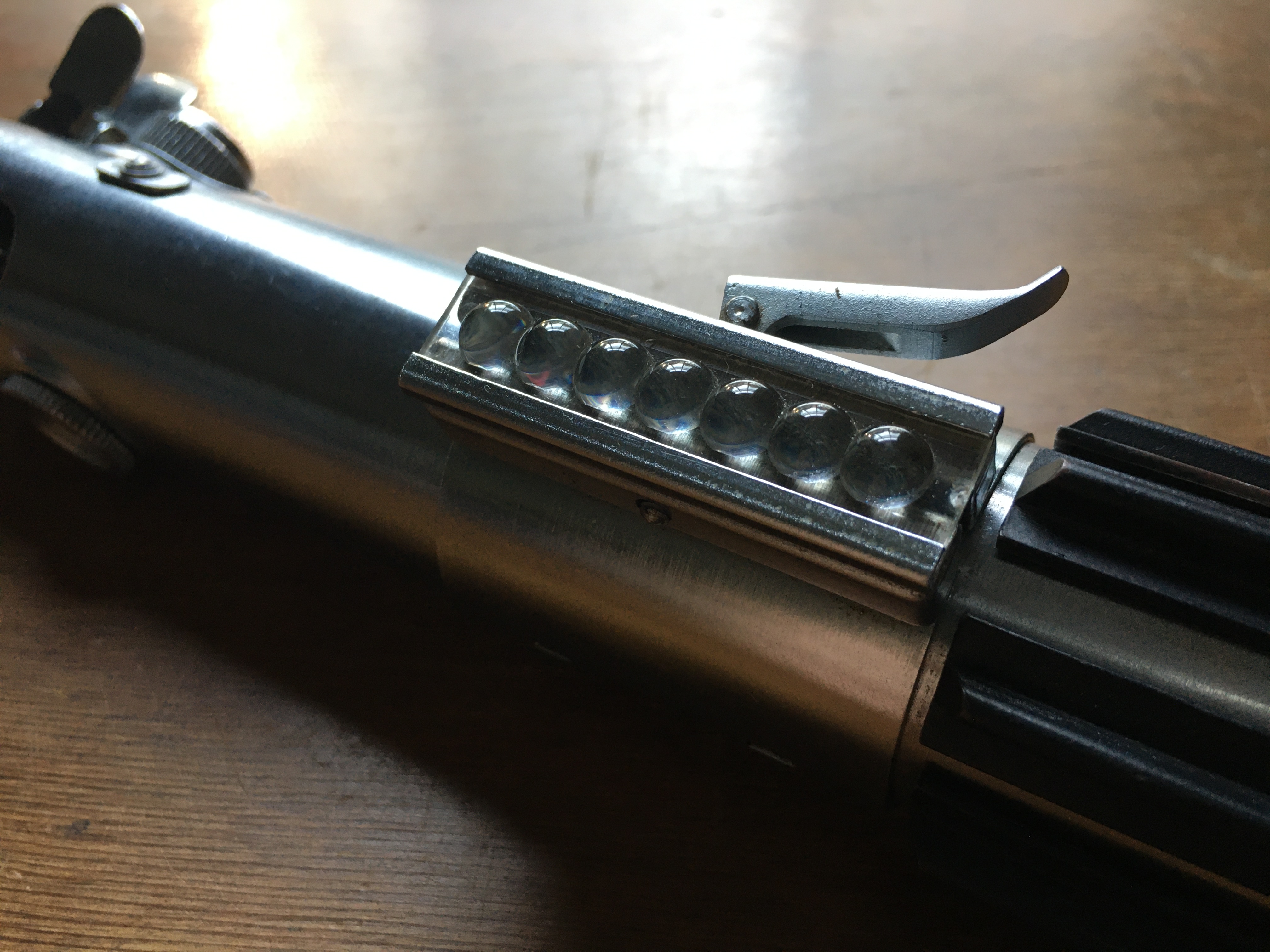 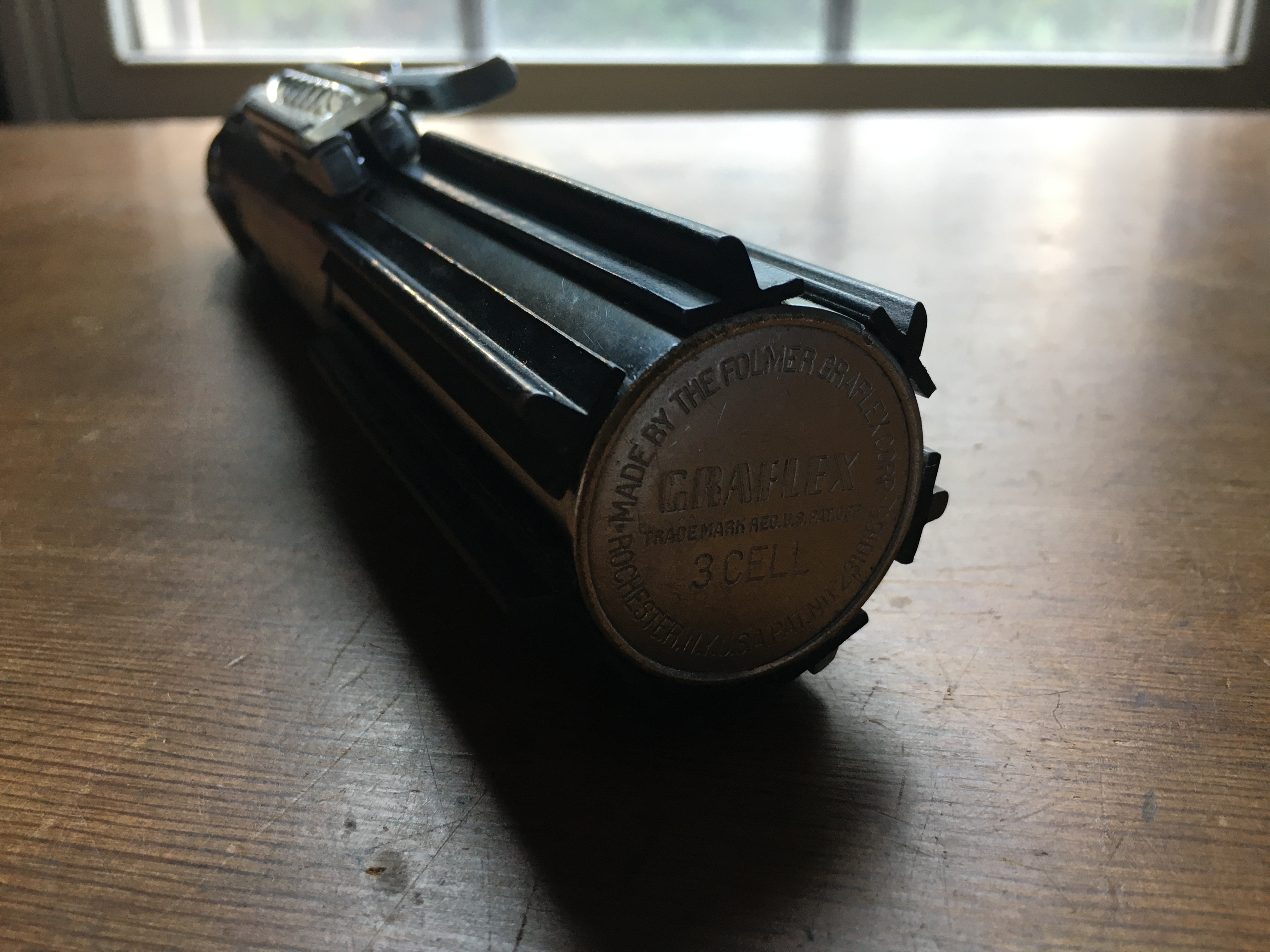 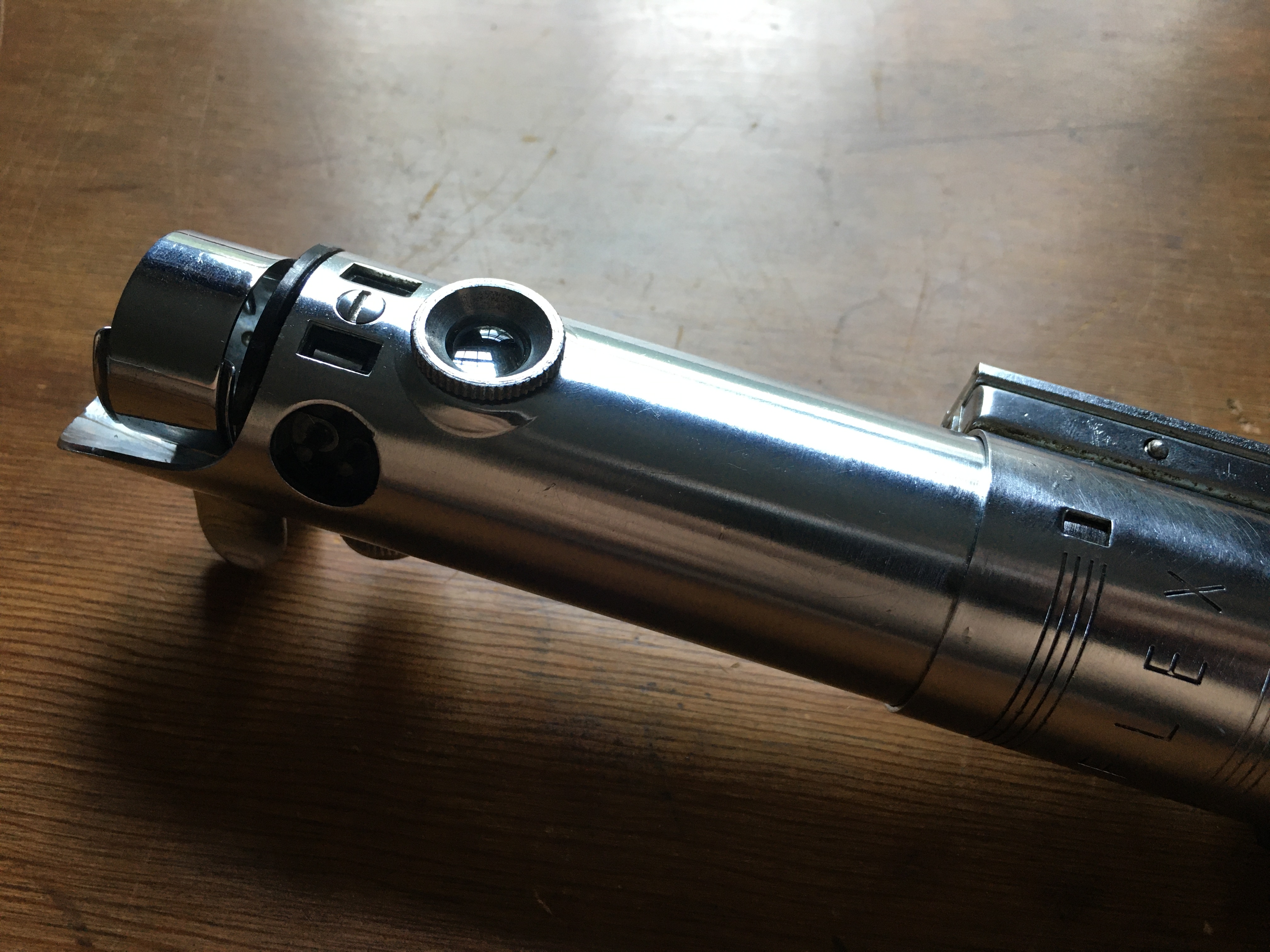 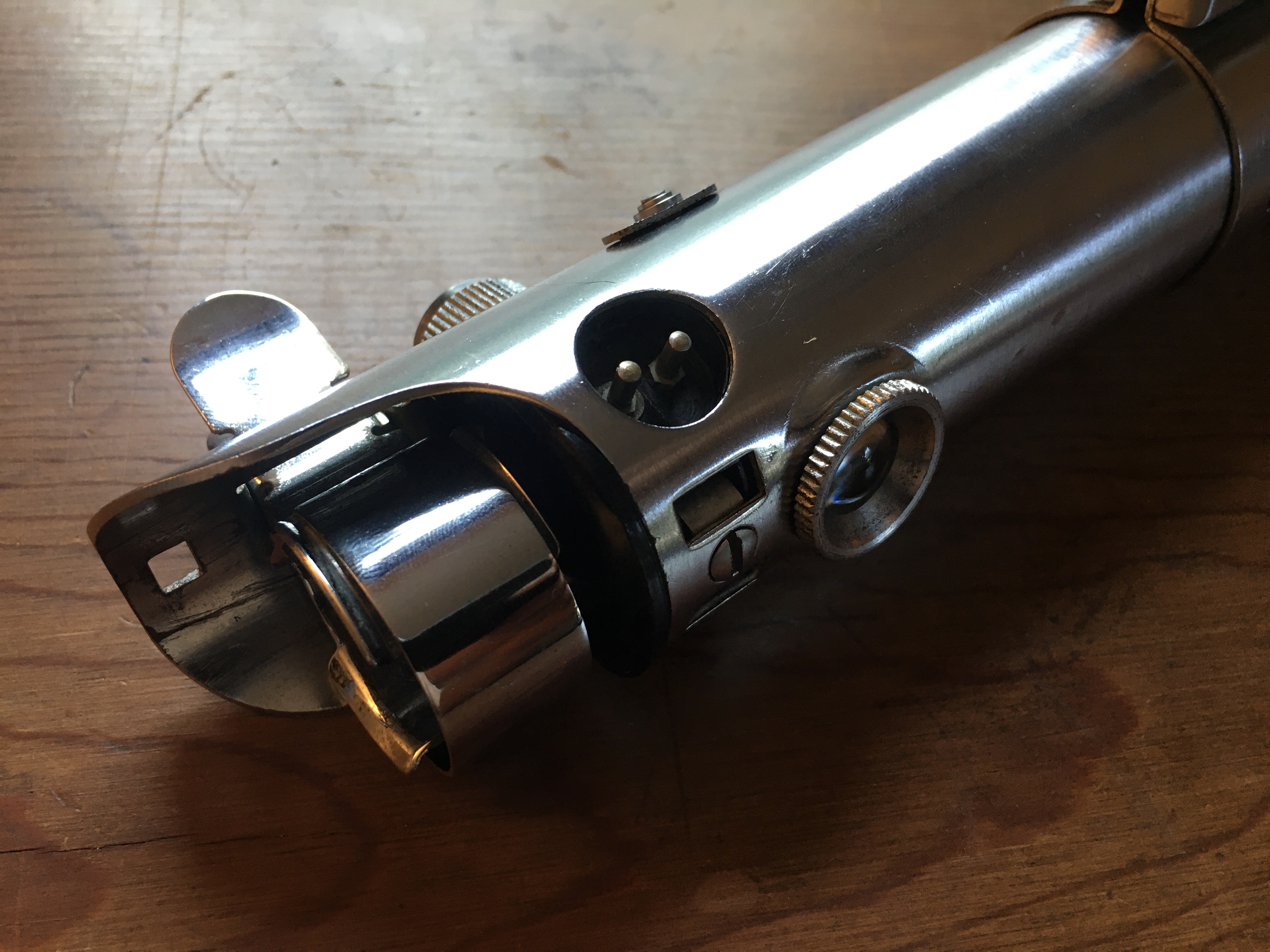 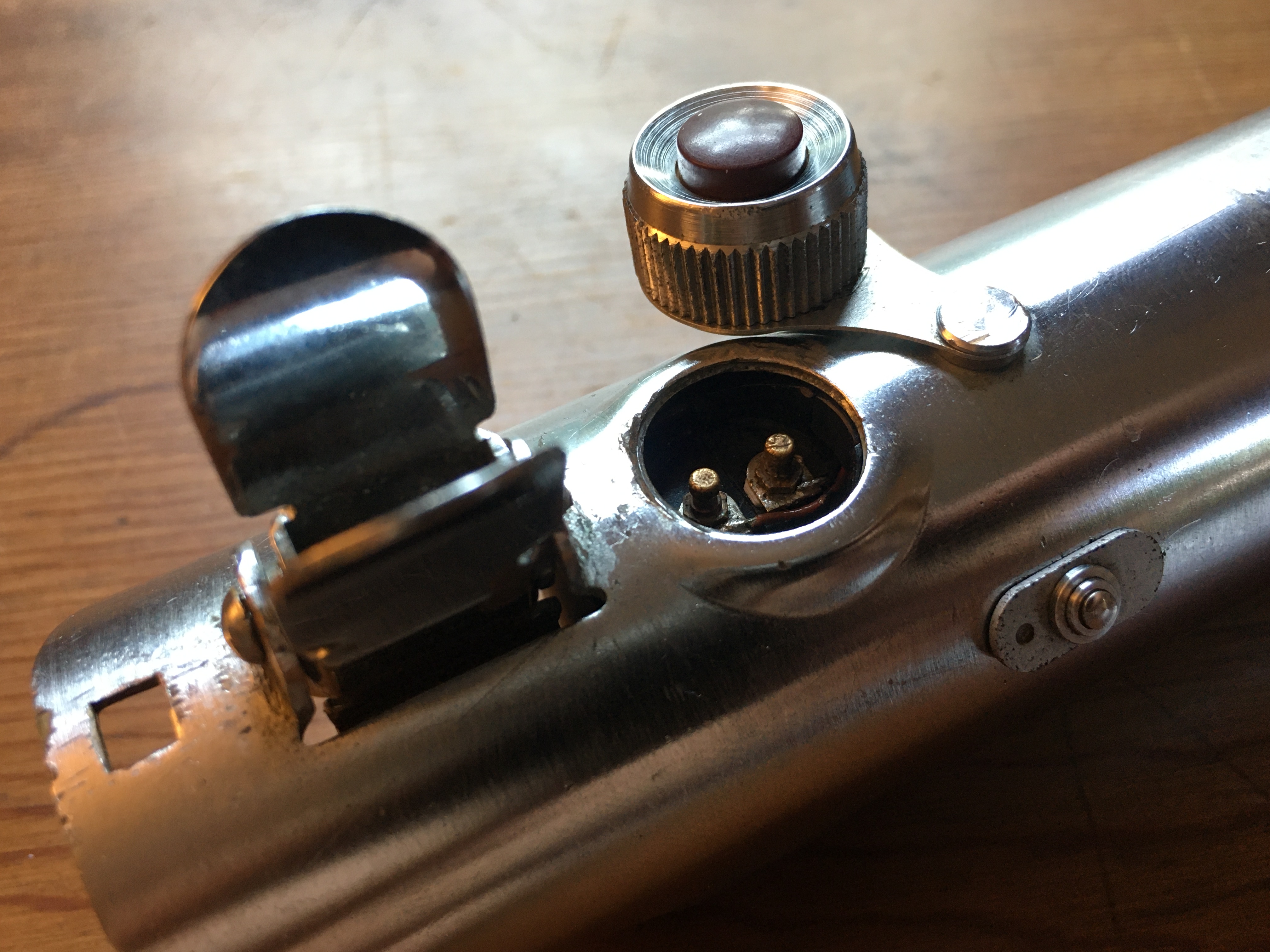 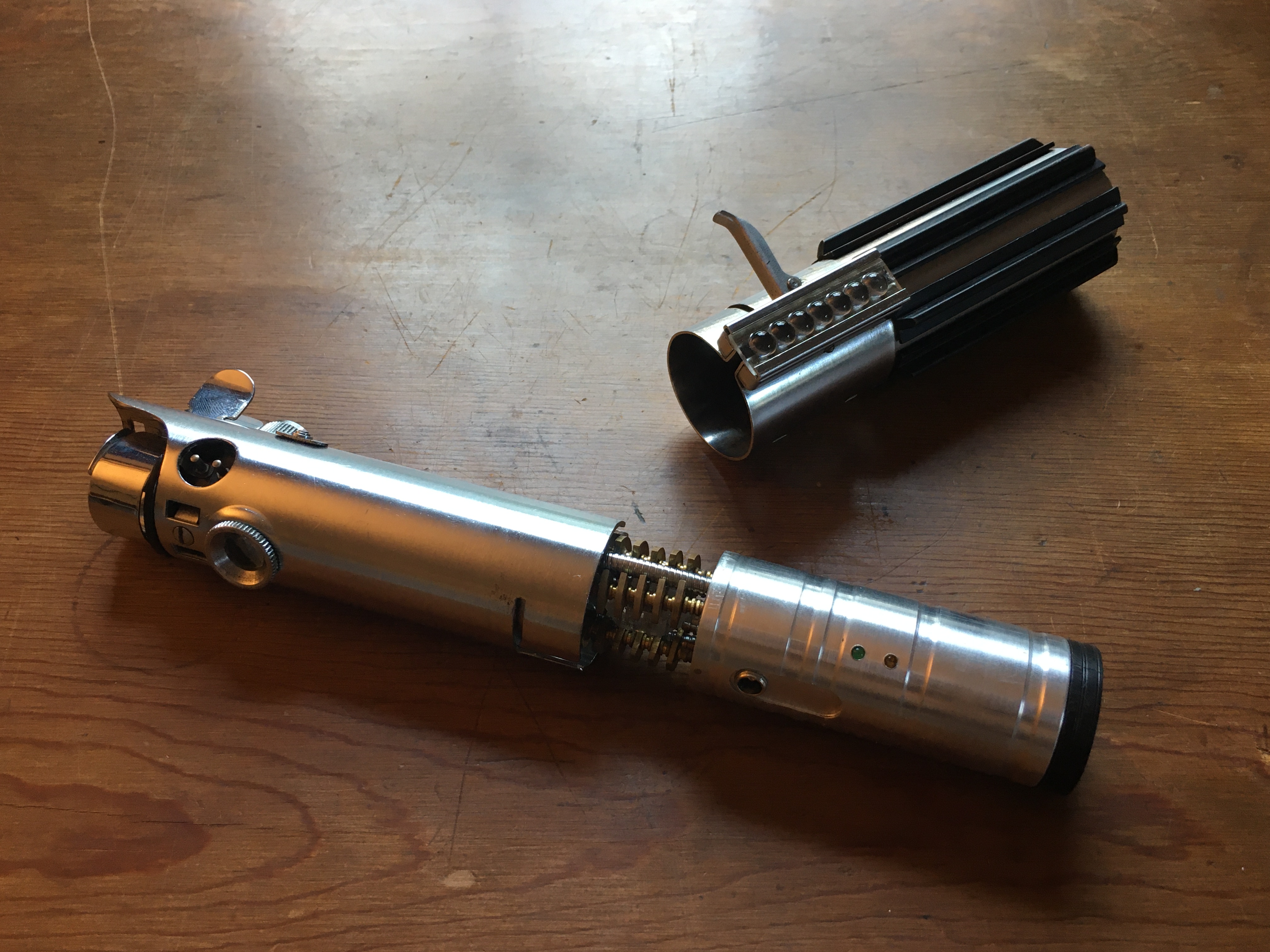 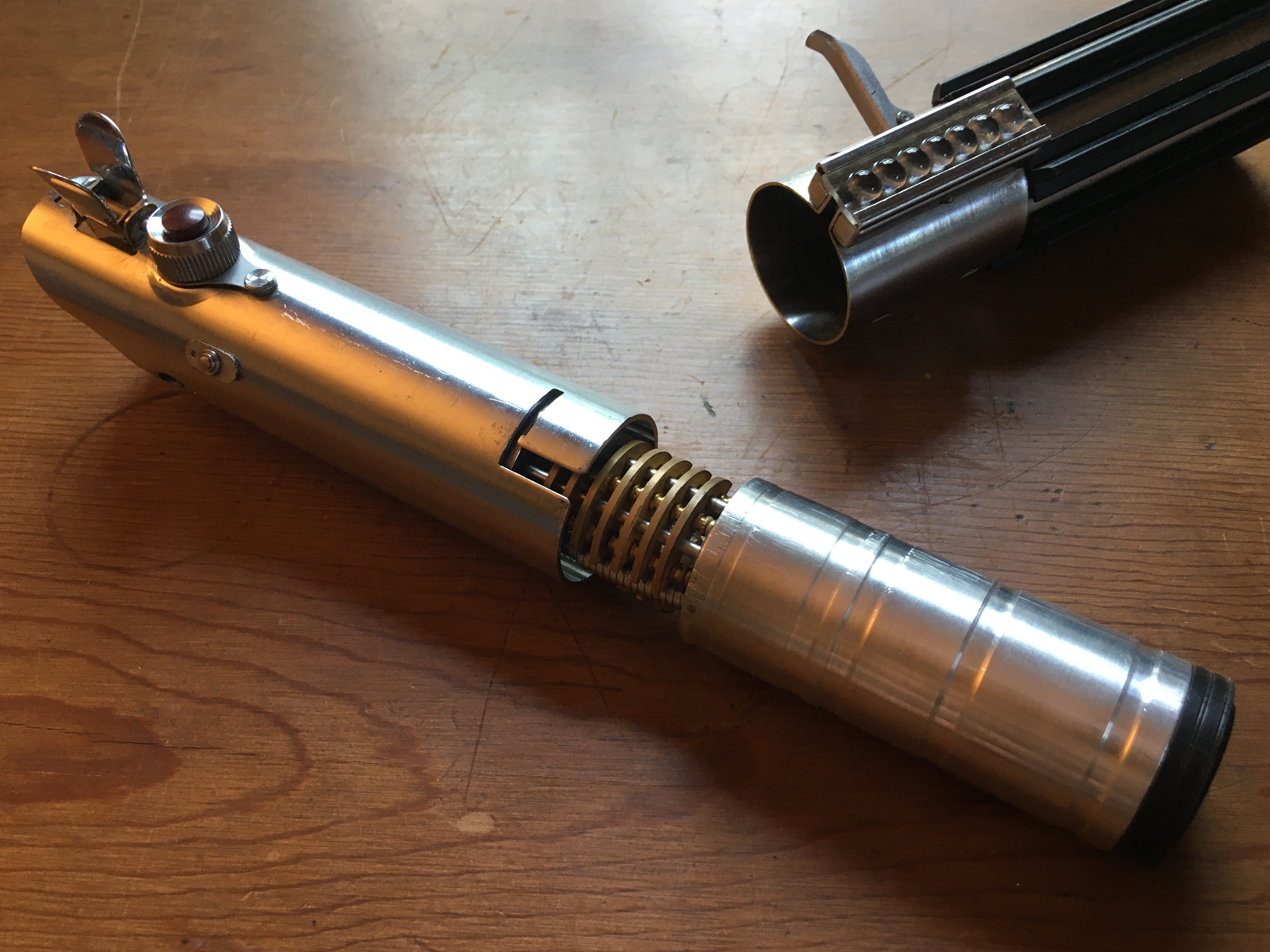 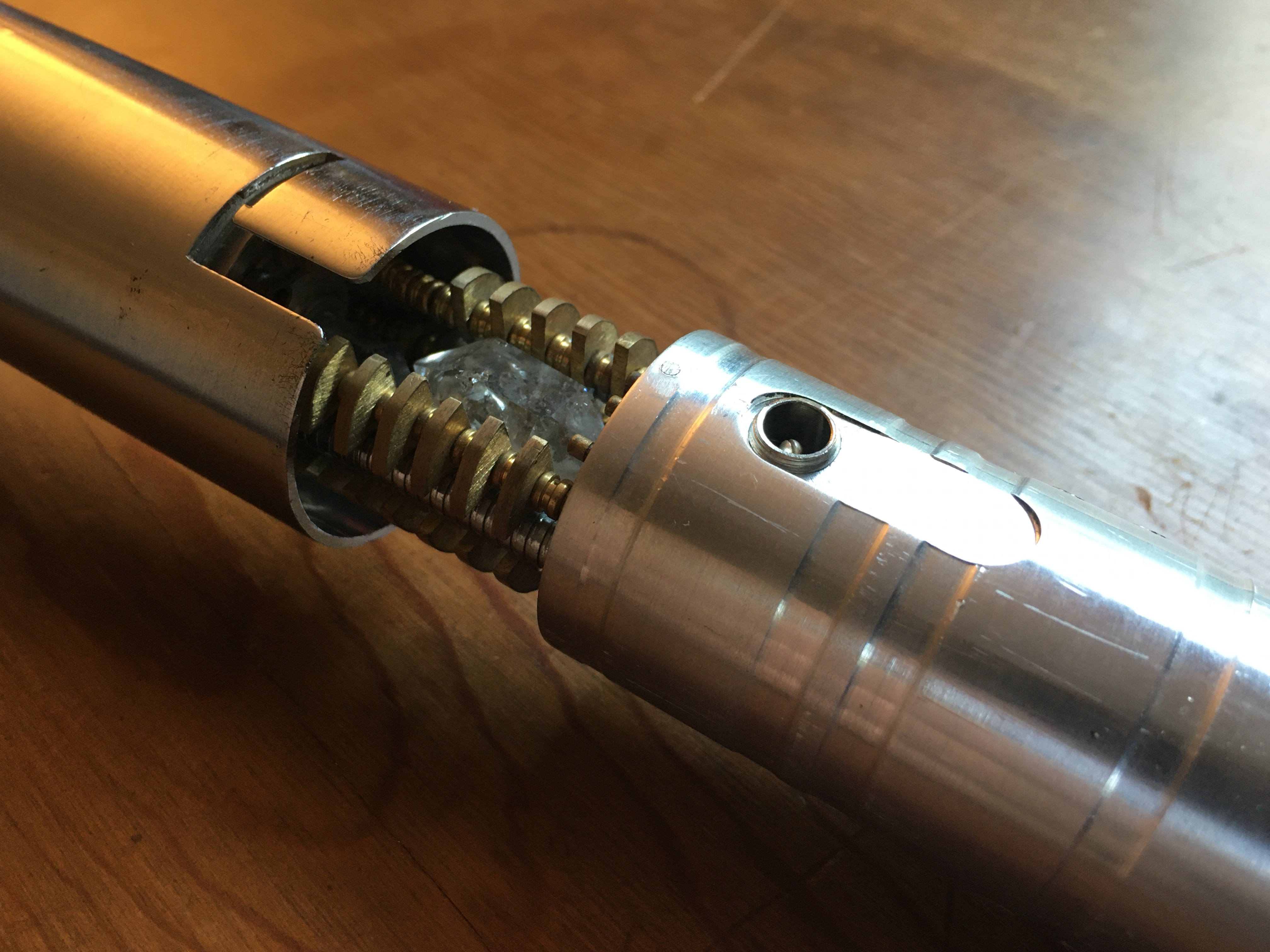 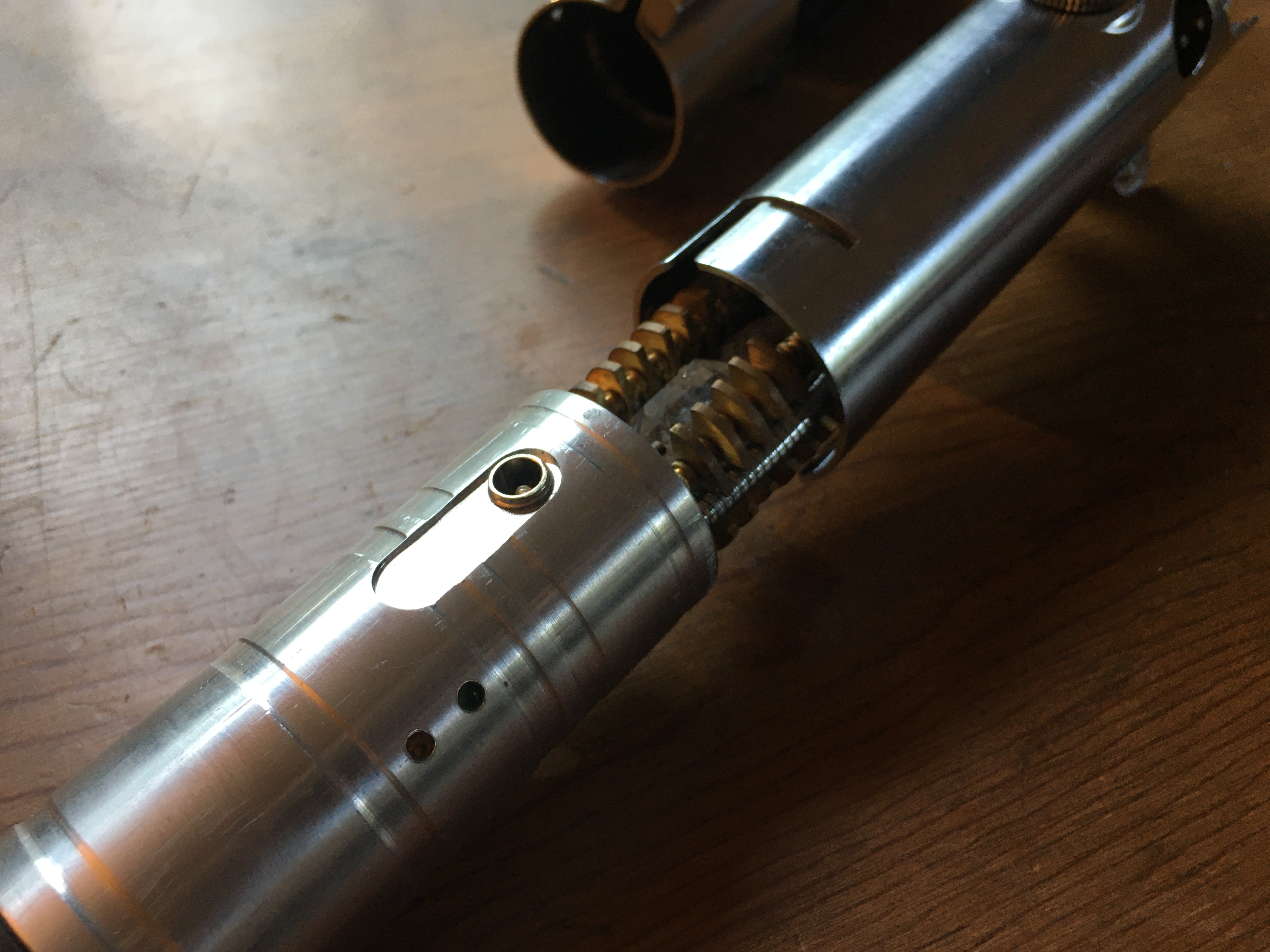 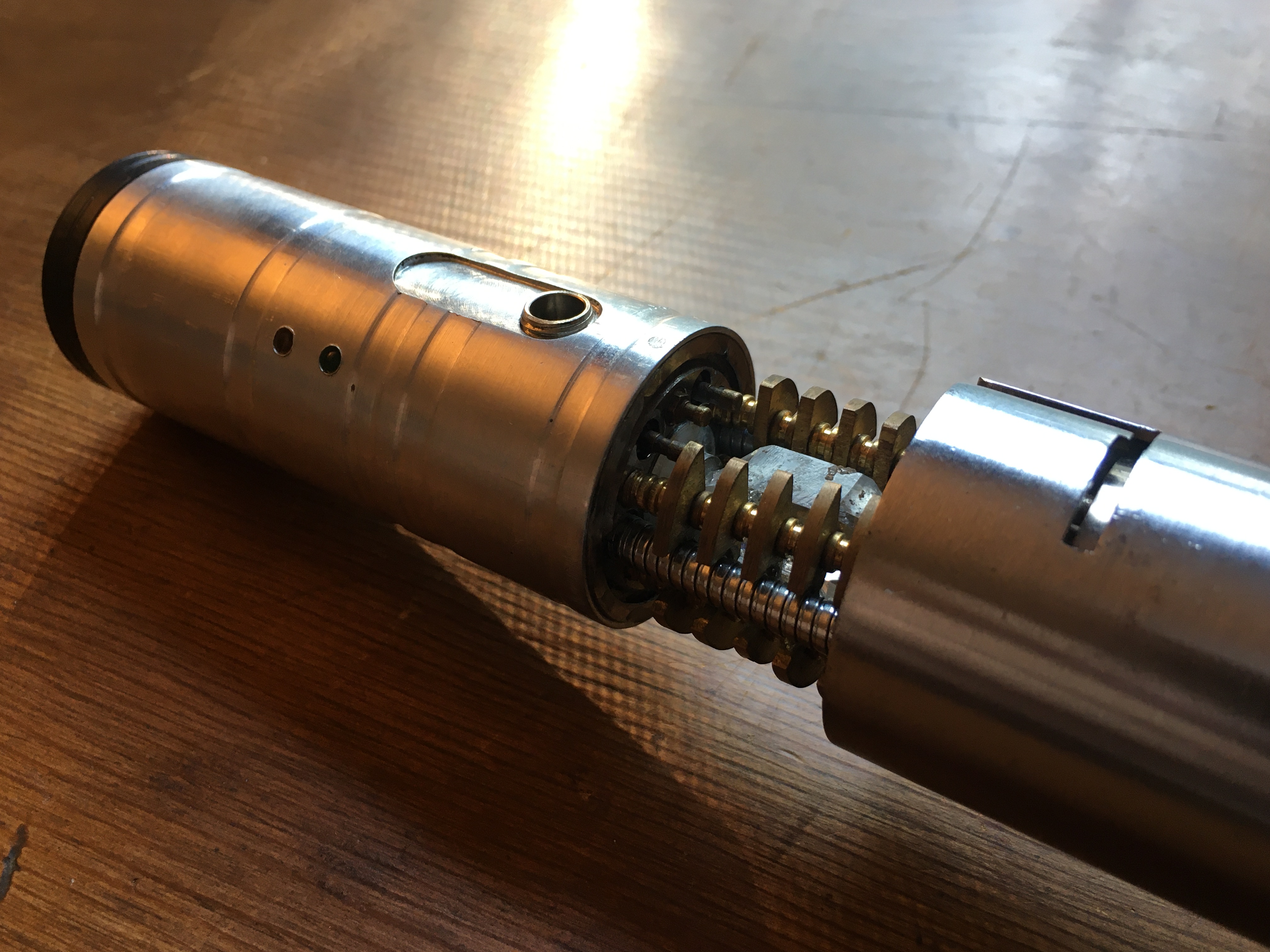 I almost forgot, I added a magnet into the chassis under where the slide switch goes in order to be able to hold the switch in there and still be able to slide it, plus it is quickly removable for accessing the chassis. 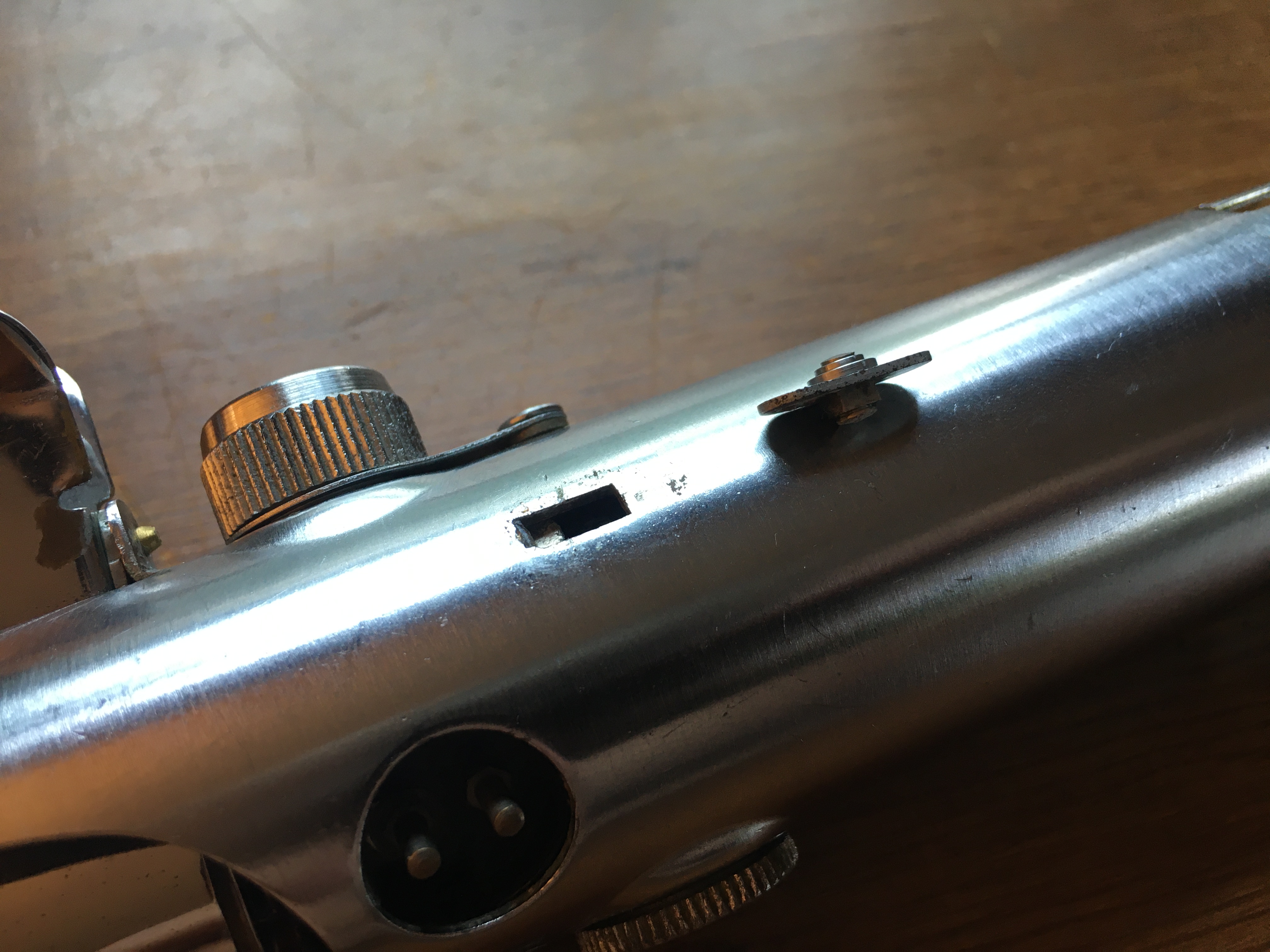 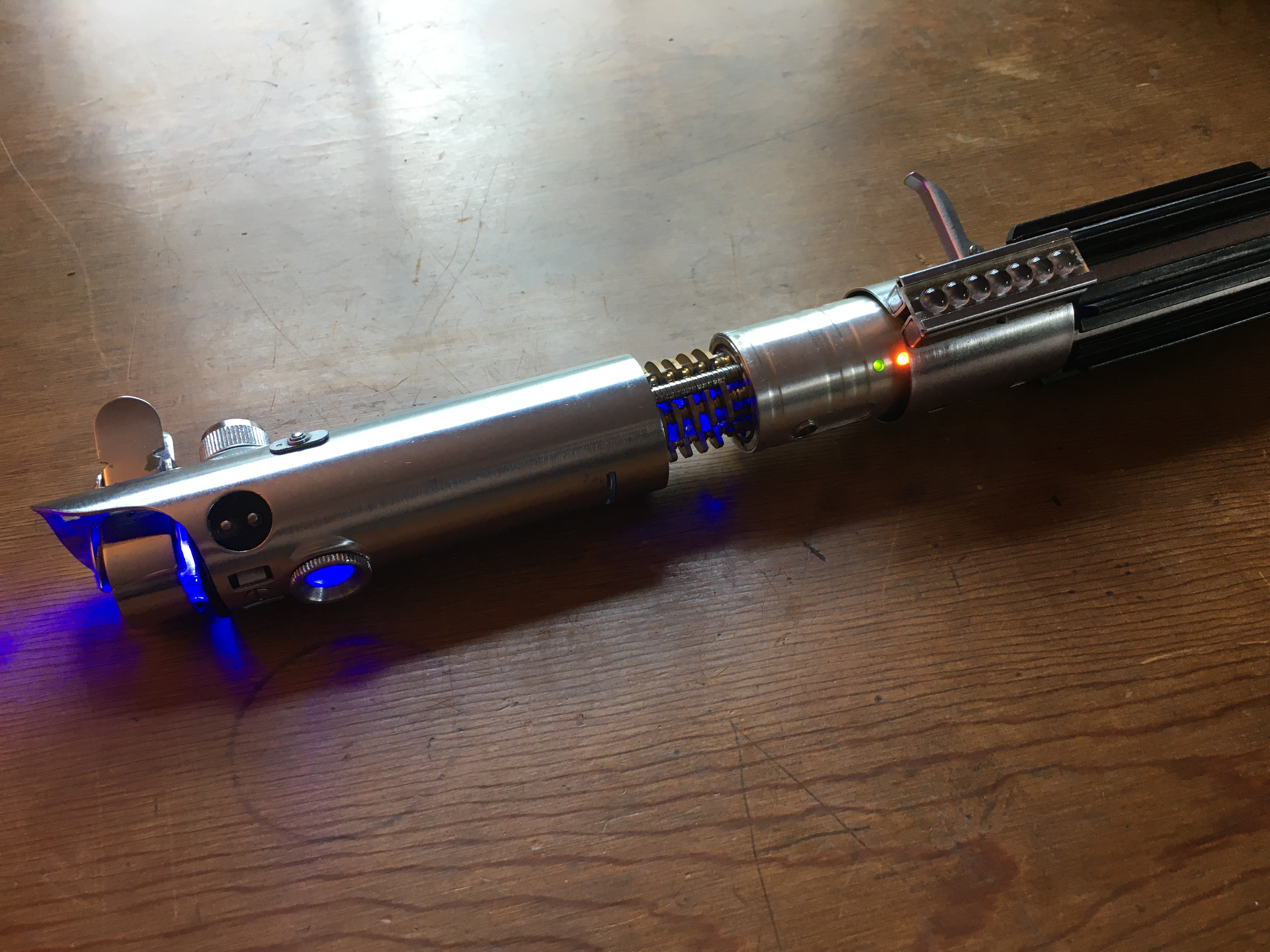 I'll likely update this as I get the D ring situation sorted out (plus gluing the side rivet heads on there) and make a new blade plug.

That is quite a custom graflex. Nice job. I admit to being a bit jealous as I would love to have an original graflex, but prices have skyrocketed in recent years.

bwize said:
That is quite a custom graflex. Nice job. I admit to being a bit jealous as I would love to have an original graflex, but prices have skyrocketed in recent years.
Click to expand...

Thanks! It's an odd market, right now they're fluctuating a bit, on eBay there's some decent deals to be had if you're careful! I have a few that are for sale if you're interested though! Send me a message if you like.


The Ninja said:
Awesome job, I love your solutions for keeping the vintage parts, especially the activation I've never seen that before very cool idea
Click to expand...

Thanks Ian! That was a trick to pull off, but I'm very happy with it, I'm happy to keep the external stuff looking as close to original as possible, and I have never seen anyone do activation like this before, it seemed like a natural step as I was reusing all of the pins anyway

RPF PREMIUM MEMBER
Made a plug for the saber, made sure the contact pin sits at the right height! Though I think I may end up making a new one with all black instead of a light ring, to blend better. Not sure. It doesn't illuminate much because of the way the inside is built, so maybe remaking it is best? 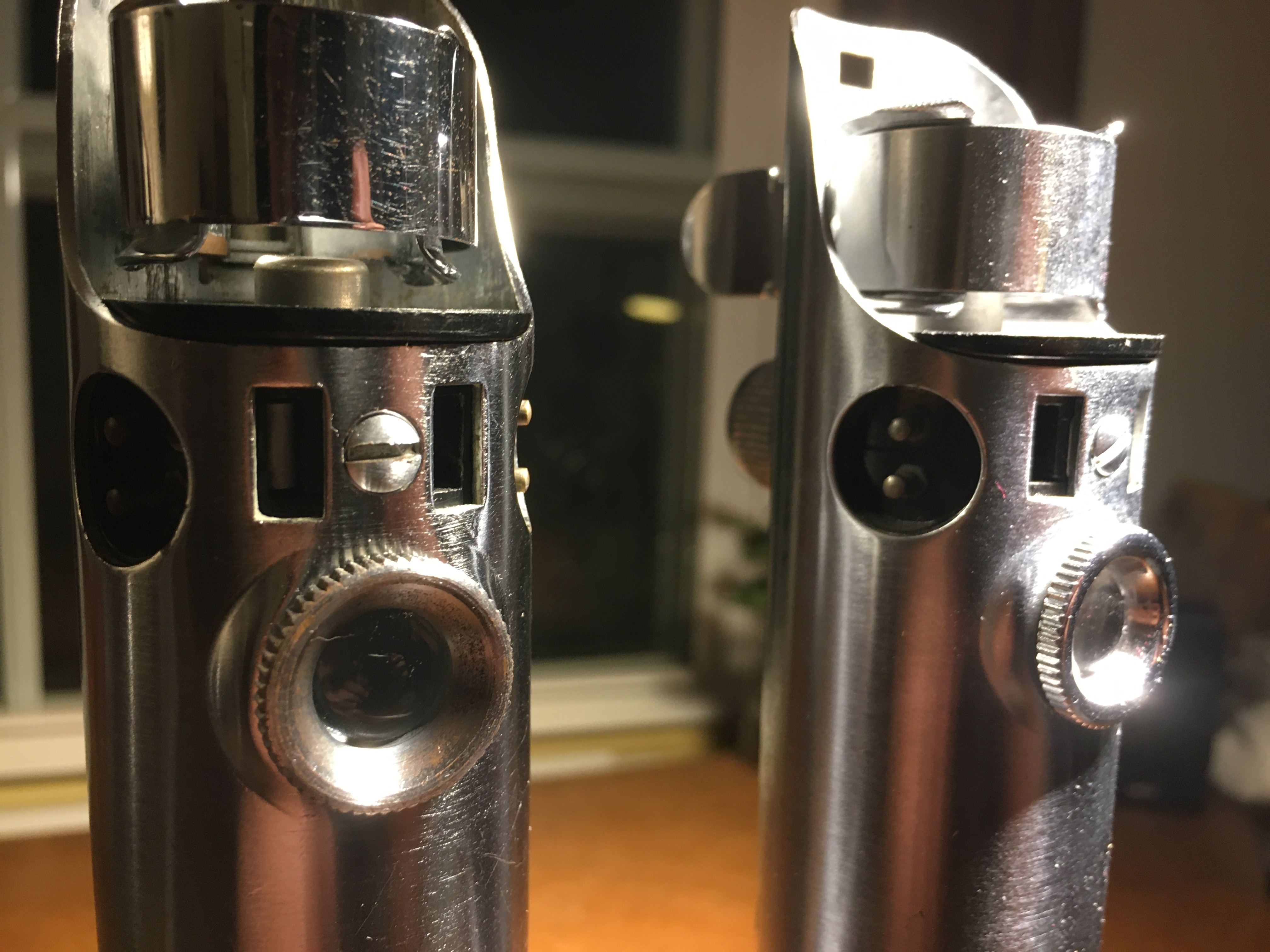 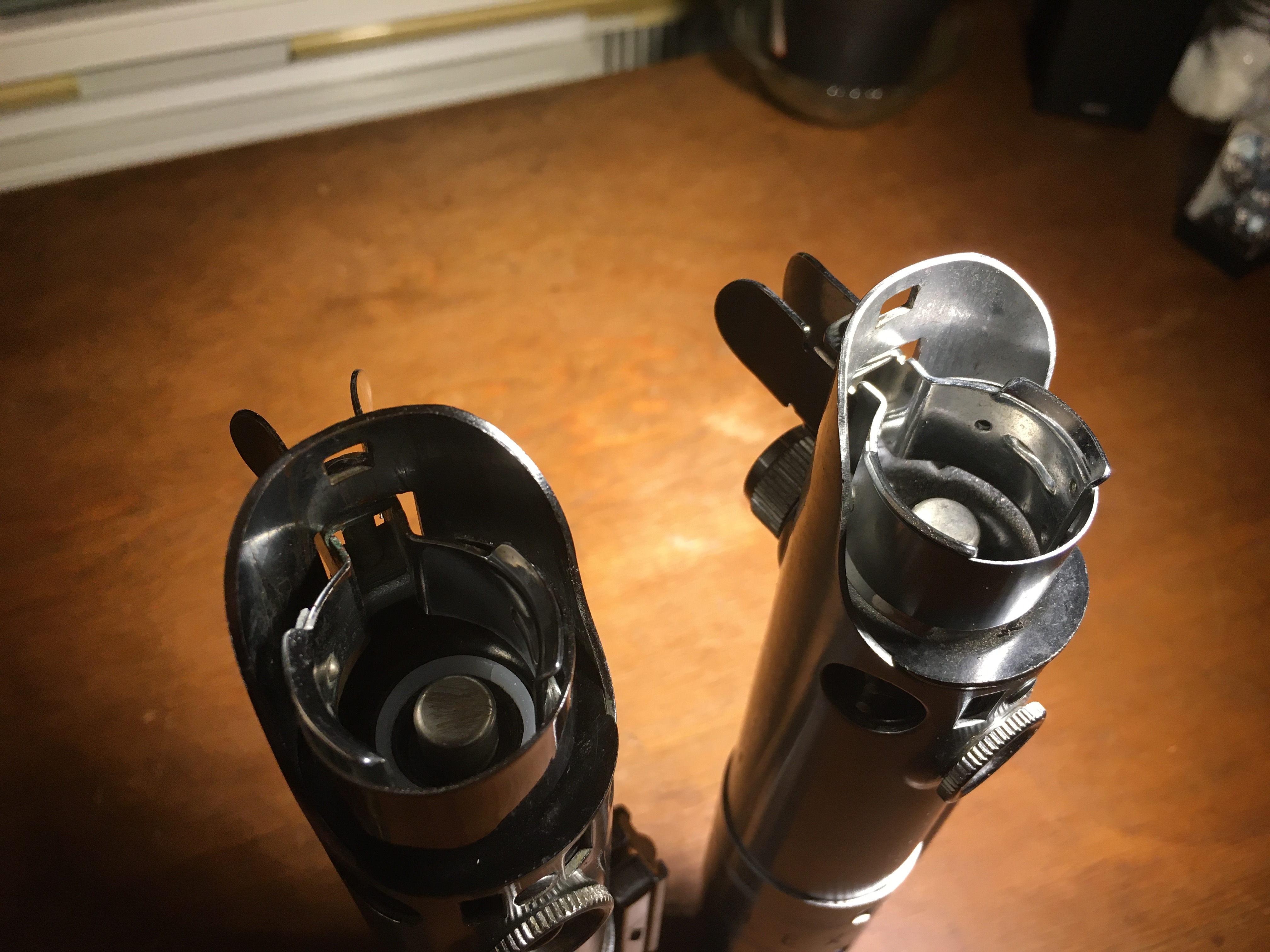 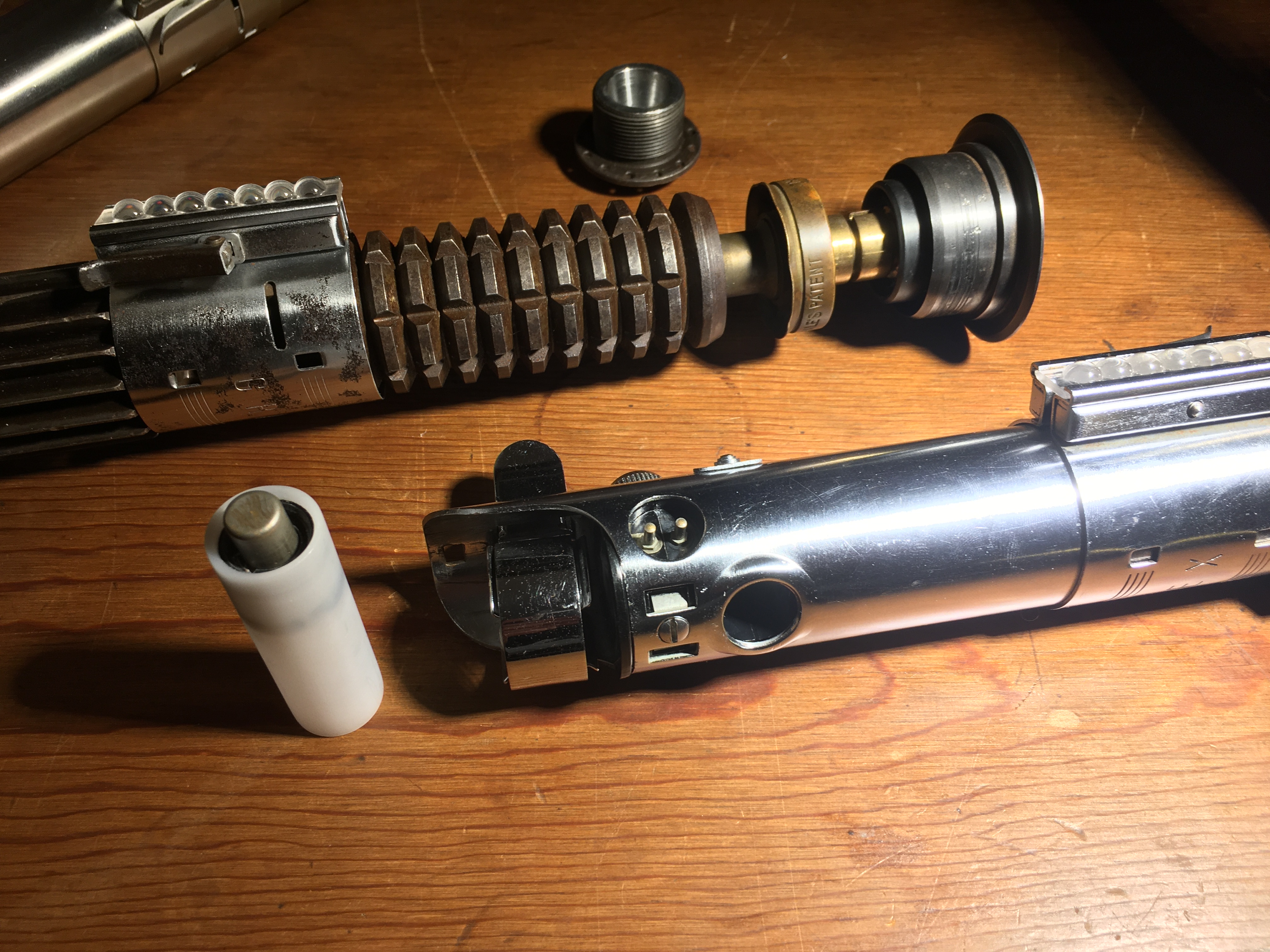 I added the contact pin seen under the notch in the graflex innards. 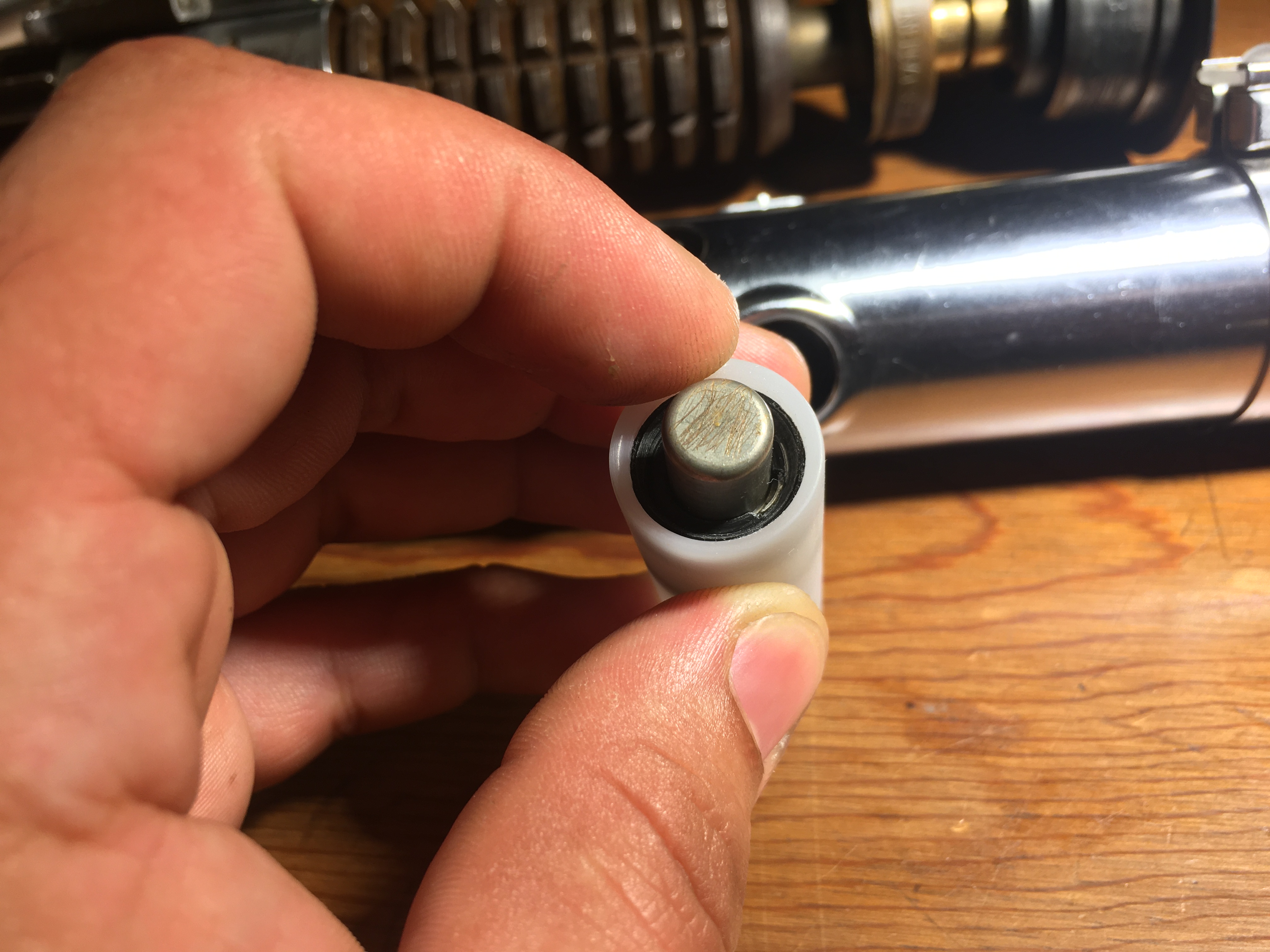 Also found a D ring I had from a while ago, it's a vintage ring from an old army bag, and is almost a perfect match to Roys, so I'll probably use some thin aluminum to make a clip for it 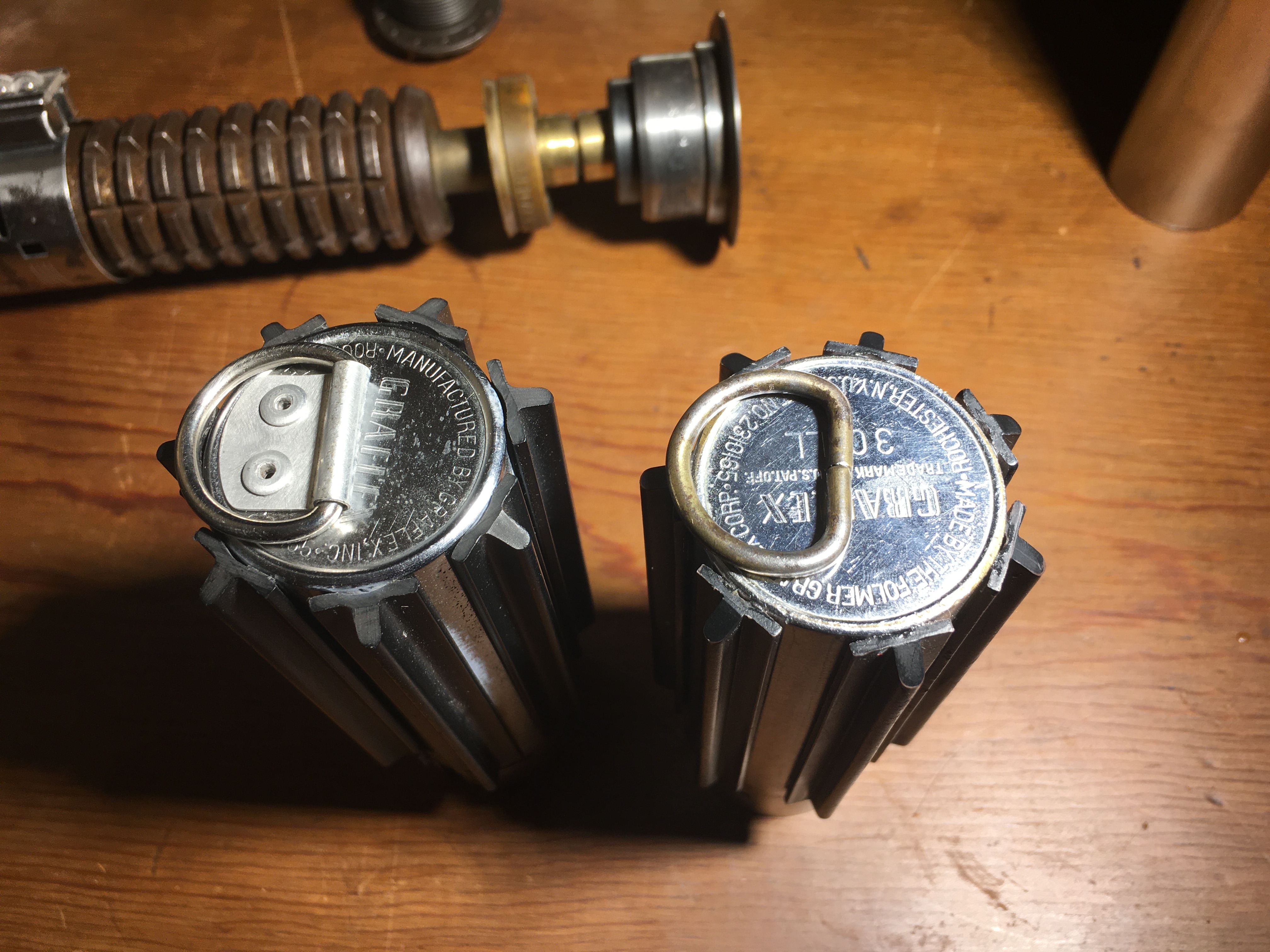 Replica or vintage folmer graflex 3 cell bottom? If replica then who's?