I have an ambitious project that I have been pondering for over 20 years to build a full scale replica of the Type-15 Shuttlepod frequently seen in Star Trek The Next Generation. It started when I saw the El-Baz in the episode "Times Squared" in 1989.

It appealed to me in that it was small (relatively) and had simple lines and planar surfaces. It also had a full interior. This was different than the Galileo shuttlecraft from the original series which had a separate interior set that was bigger in the inside than the outside (like a Tardis).

In volume 8 of the Official Star Trek The Next Generation magazine they published some of Rick Sternbachs concept drawings. 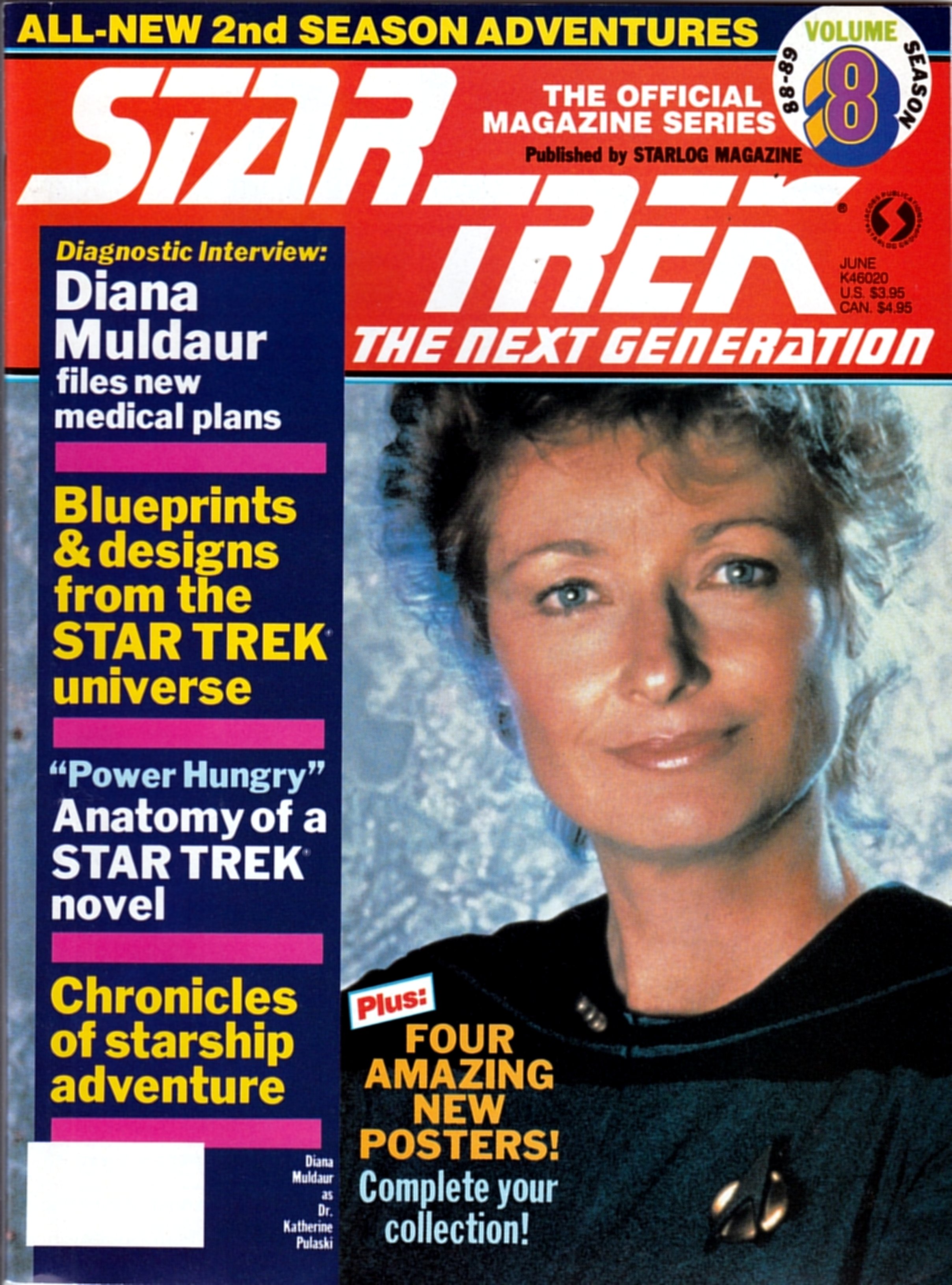 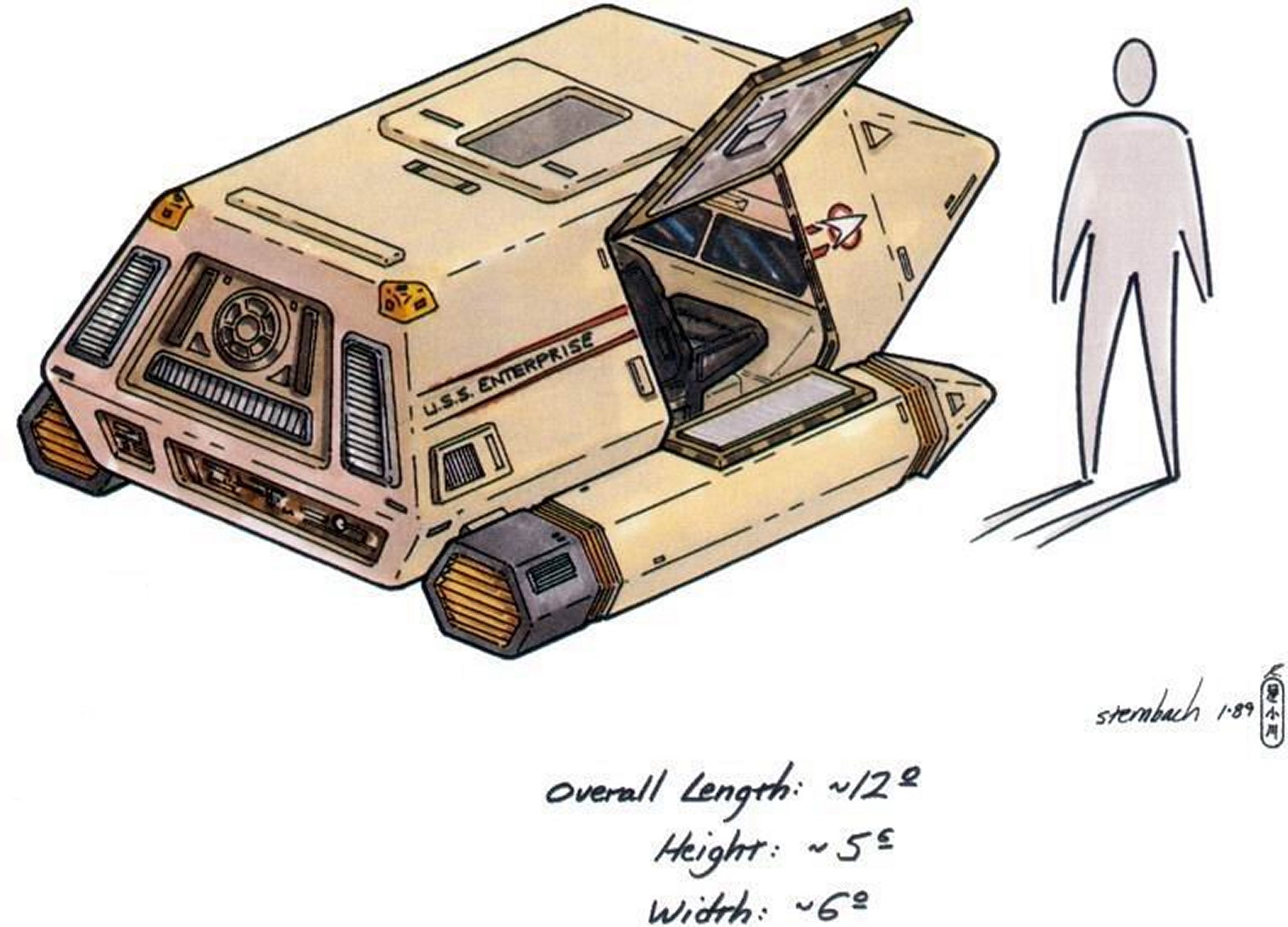 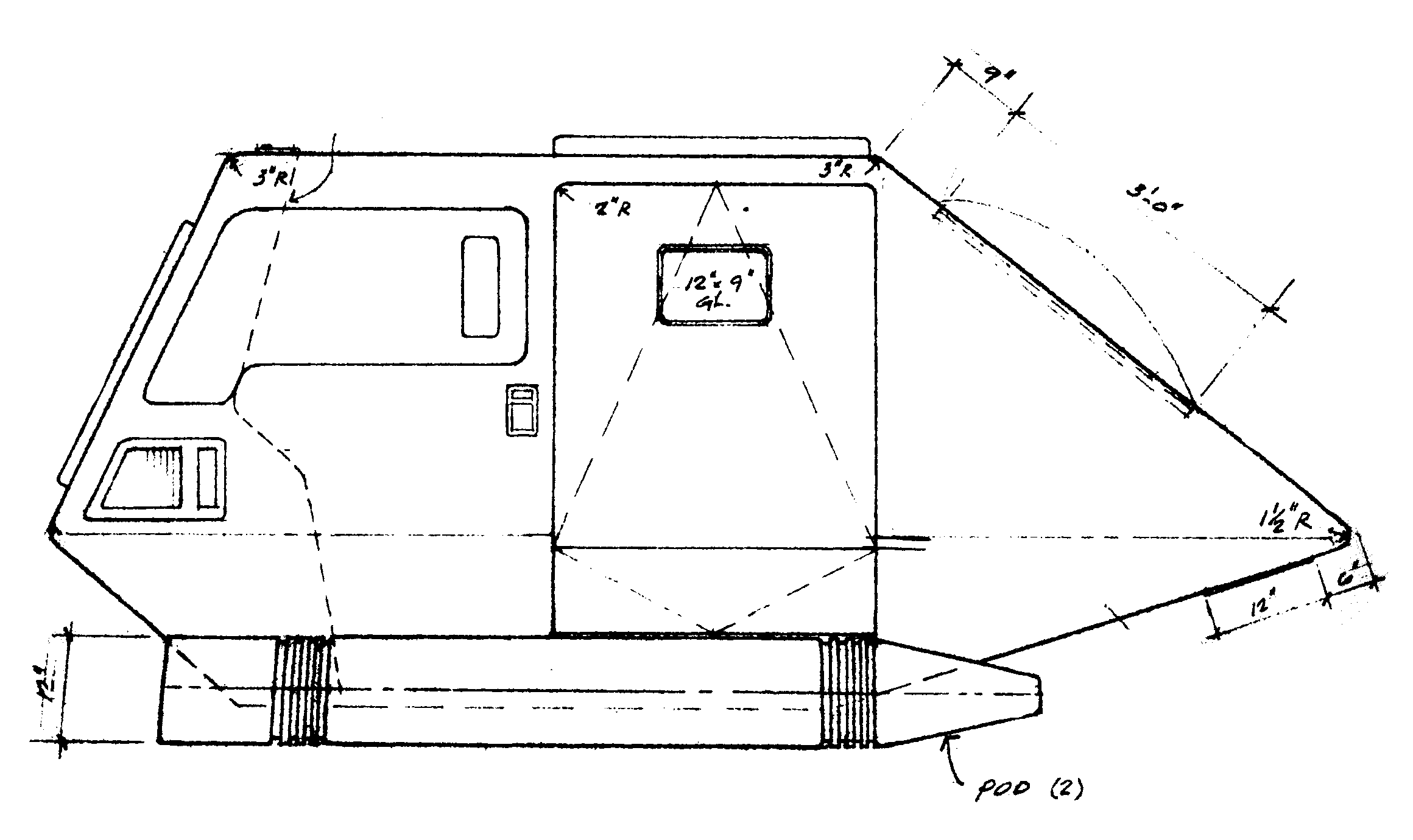 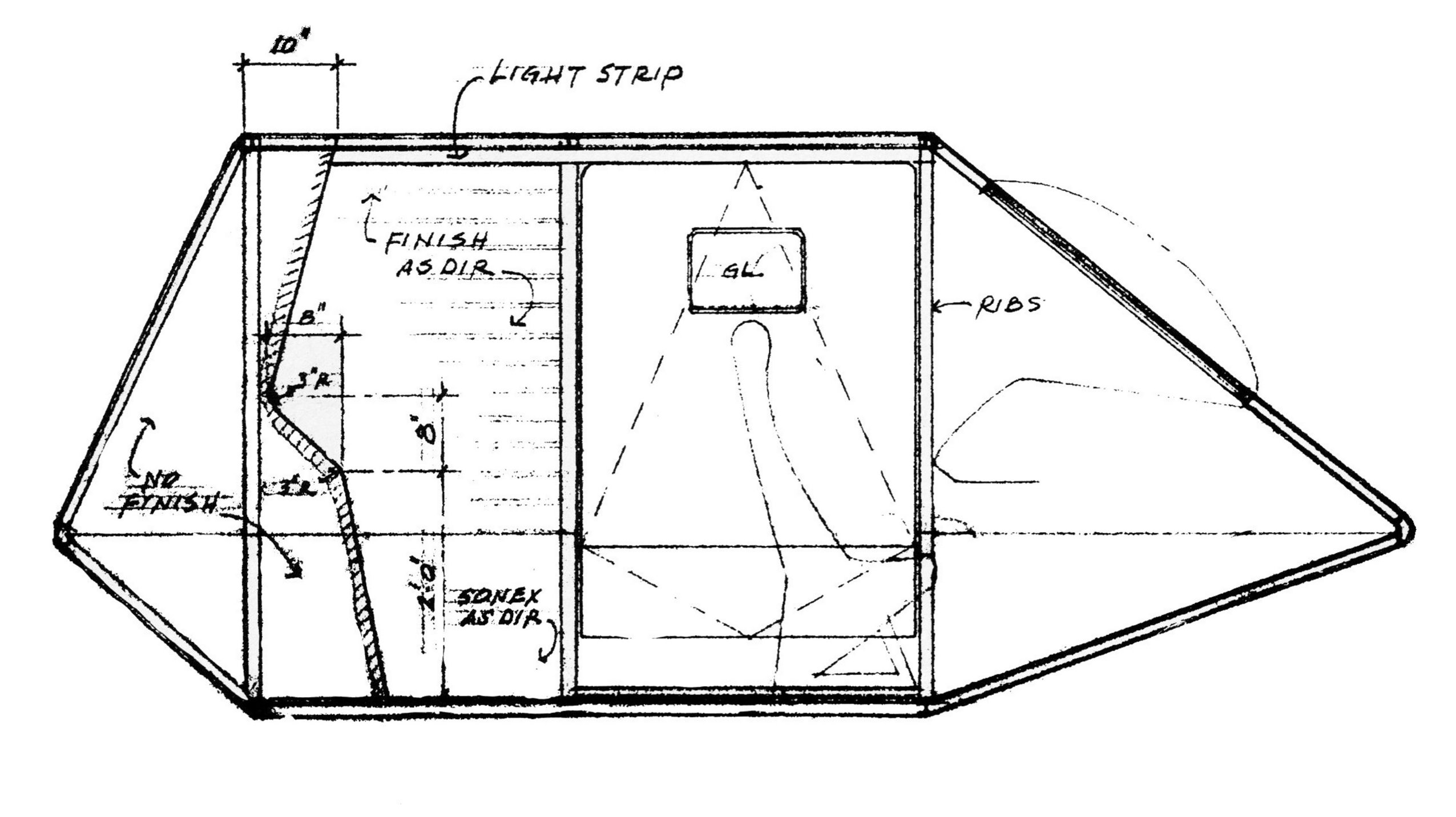 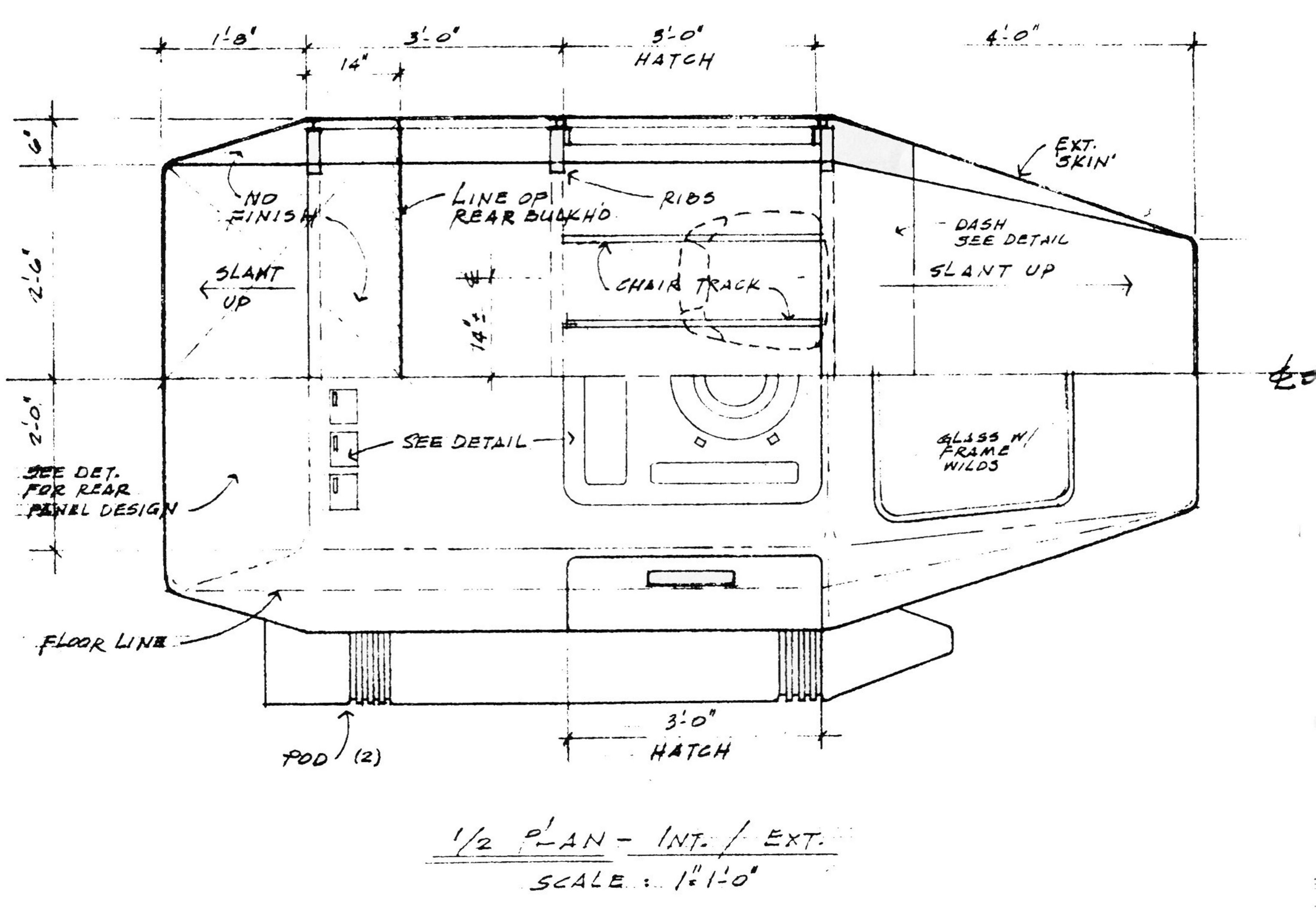 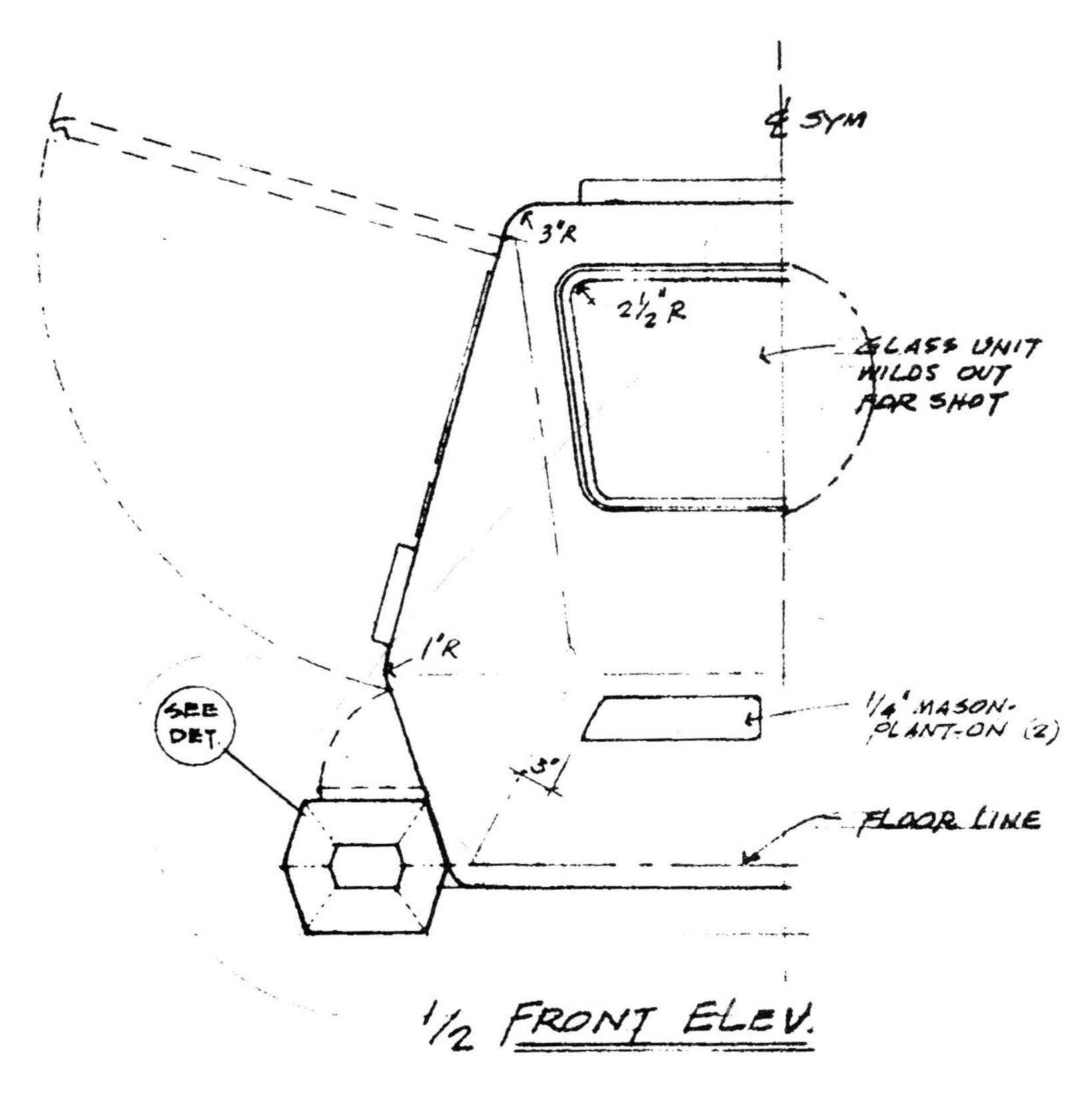 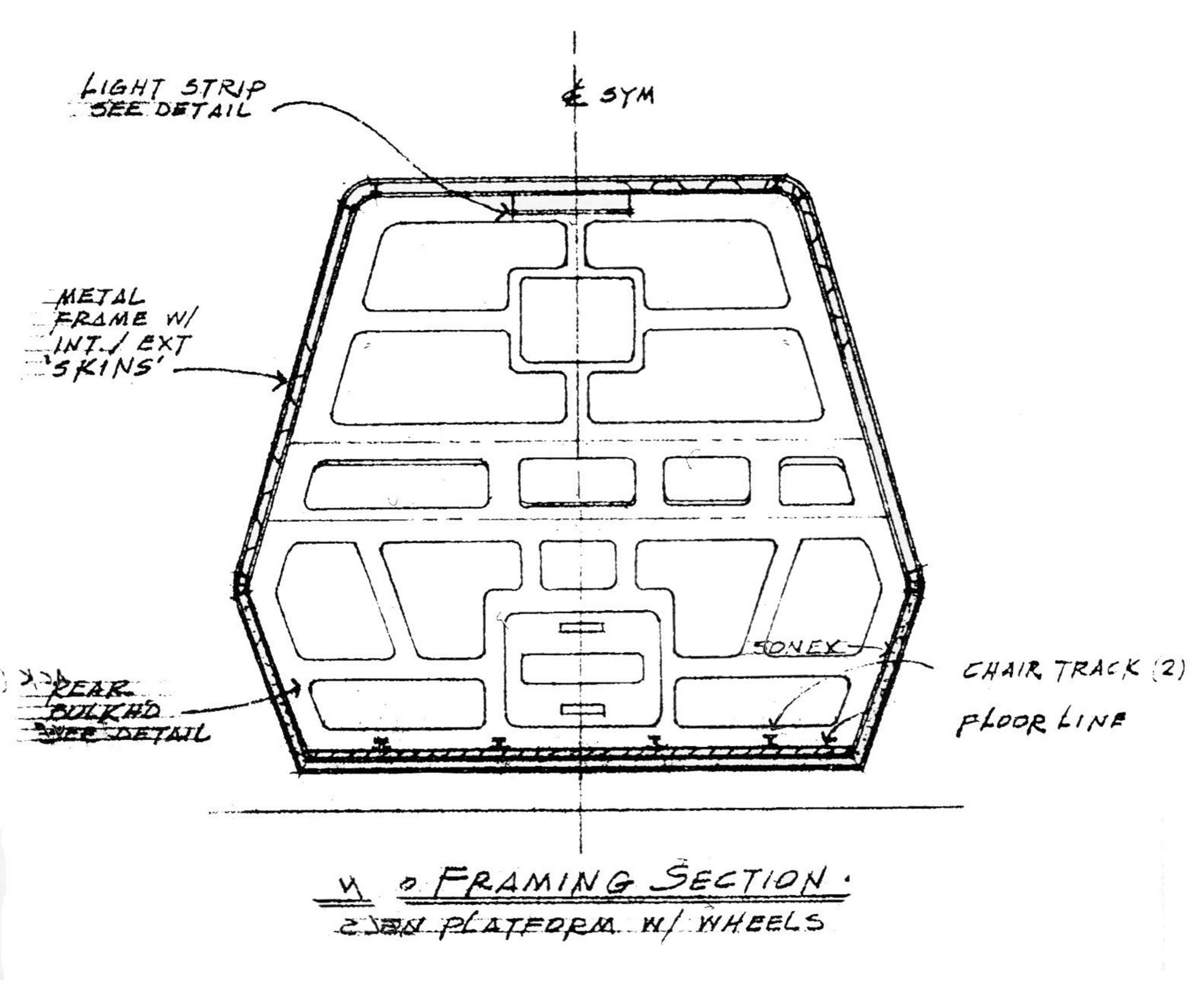 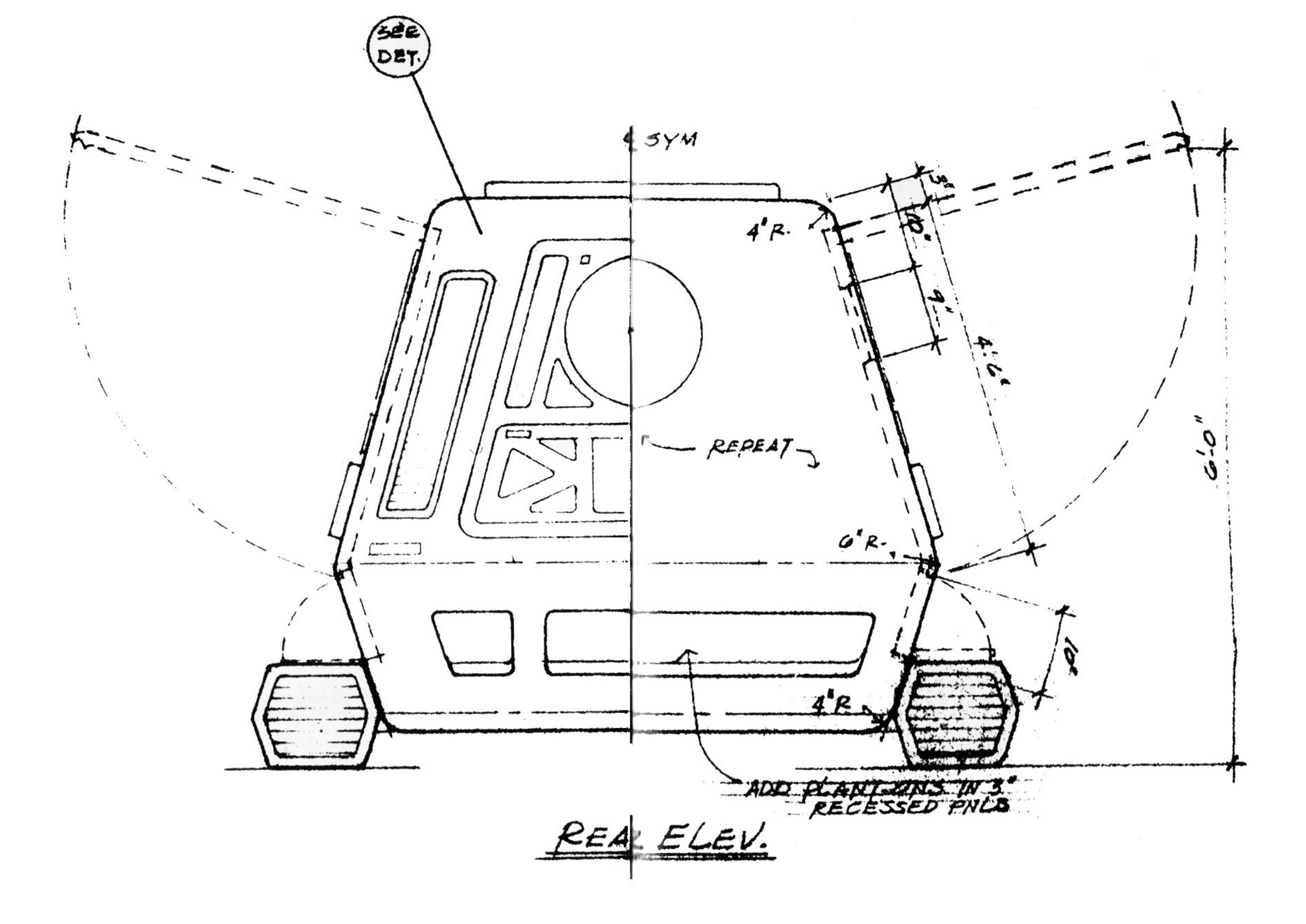 These drawings are not true to the actual finished prop, but they do provide the general dimensions and identify some of the materials.

In the same issue they also published some pictures taken during production that were not shown on-air. (Note the cables protruding from the rear of the engine nacelle). 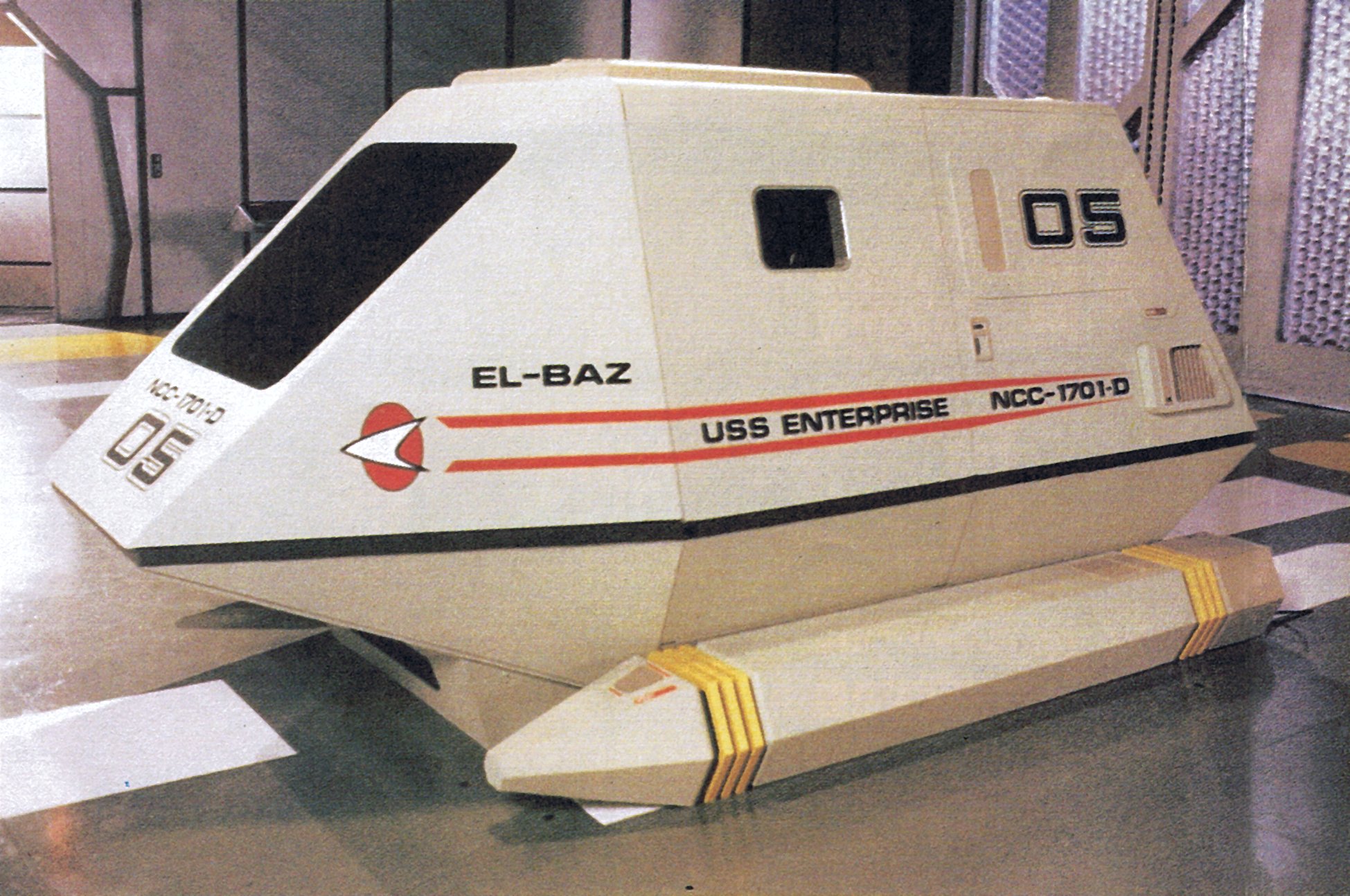 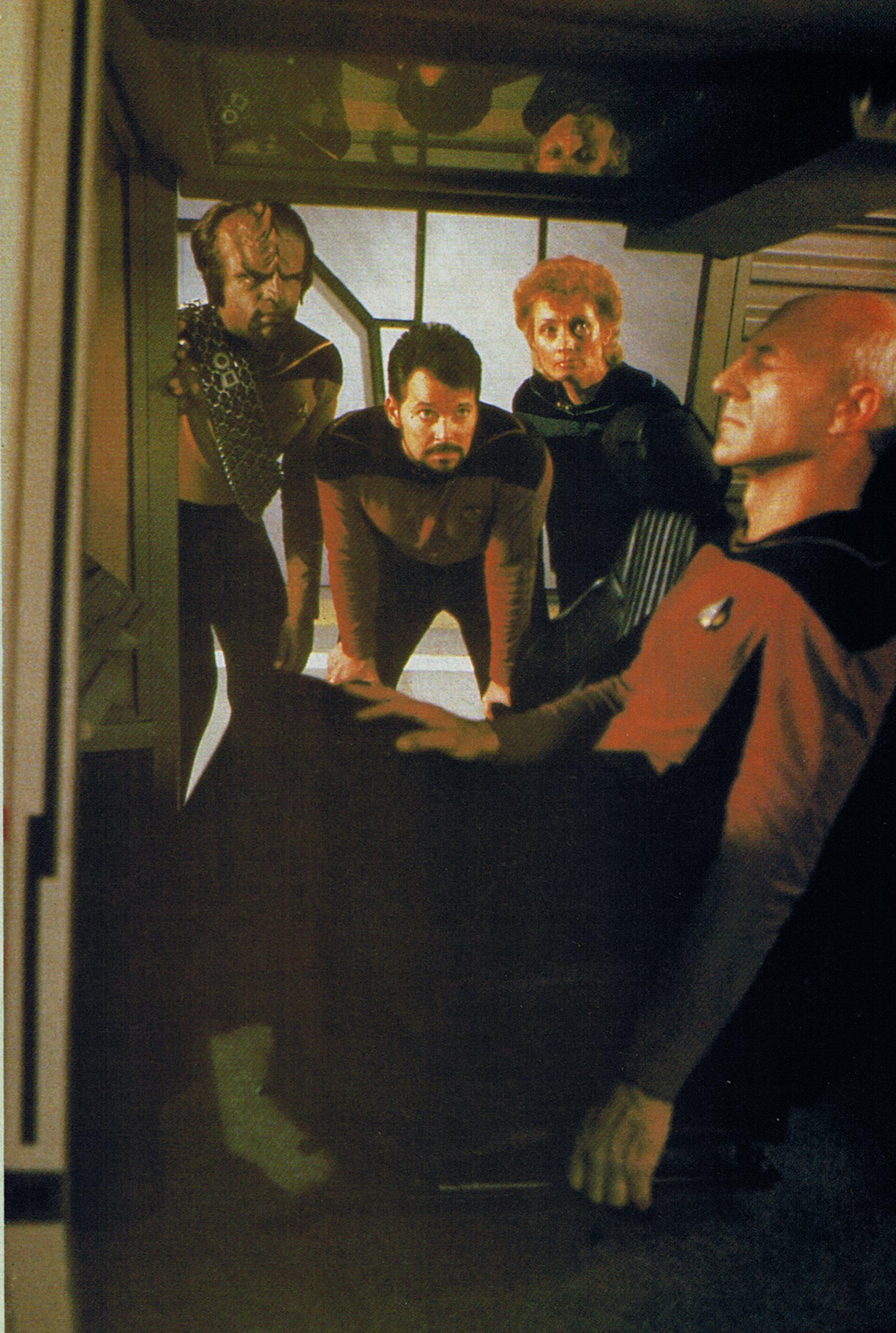 Over the years I have made many sketches and then migrated them onto CAD files and started building a detailed solid model.

Once the series was released on DVD I could finally get some decent screen captures of the details of the shuttlepod. (I photoshopped the actors out whenever possible). 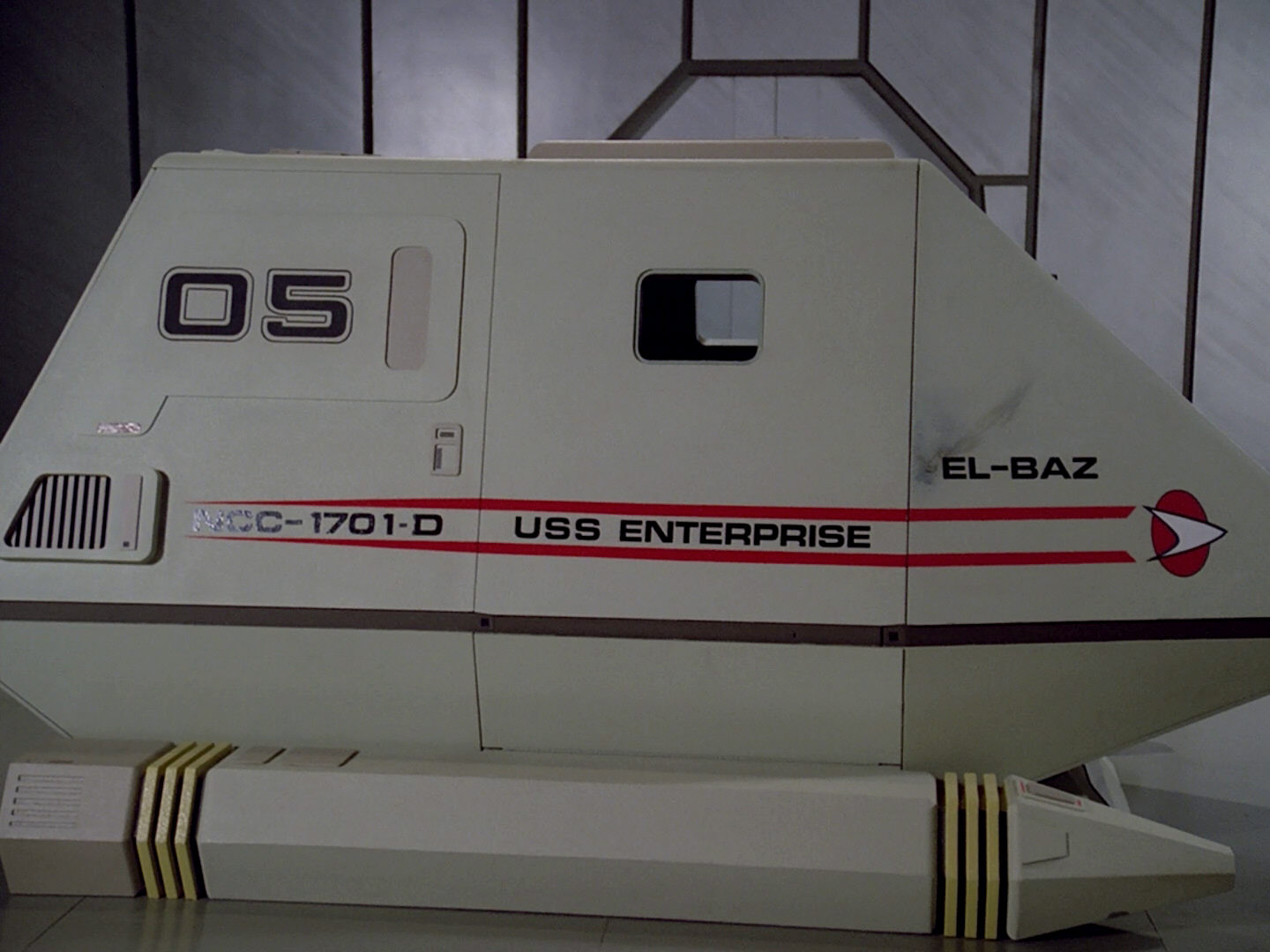 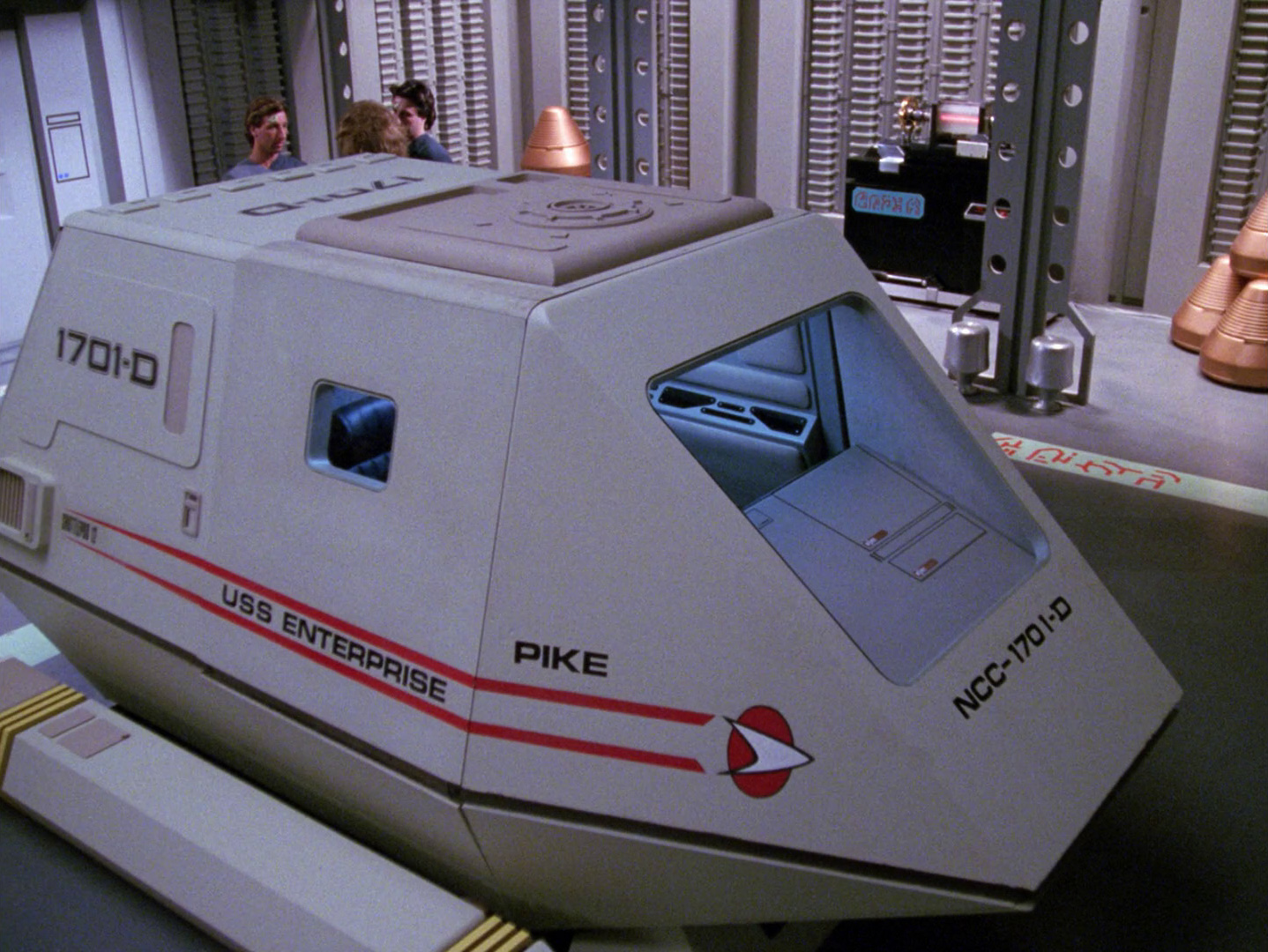 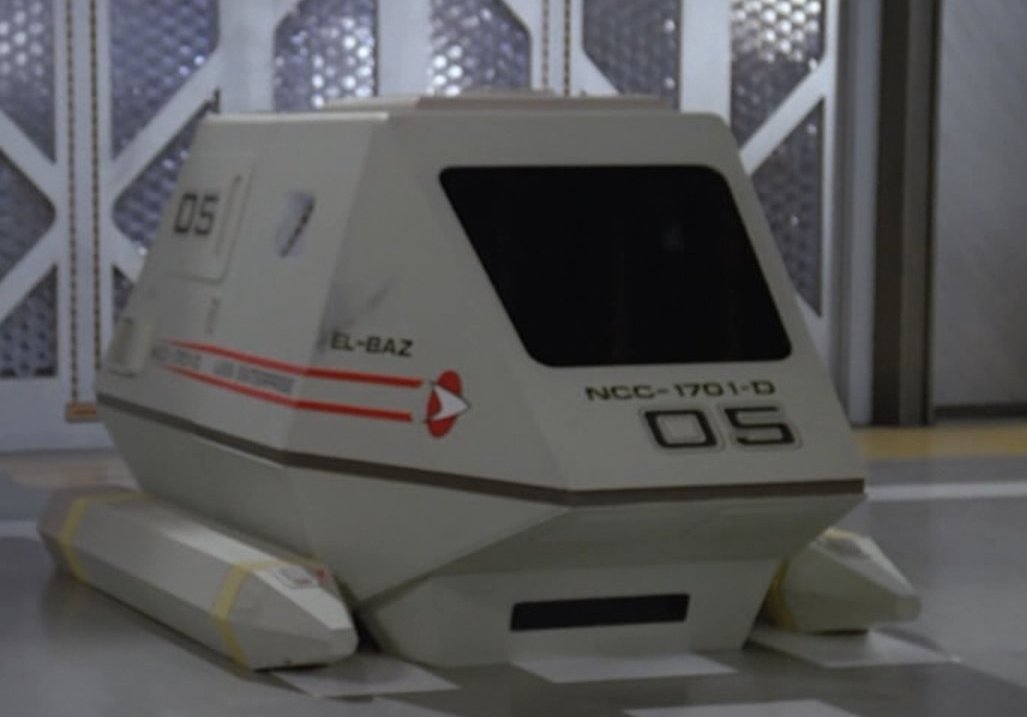 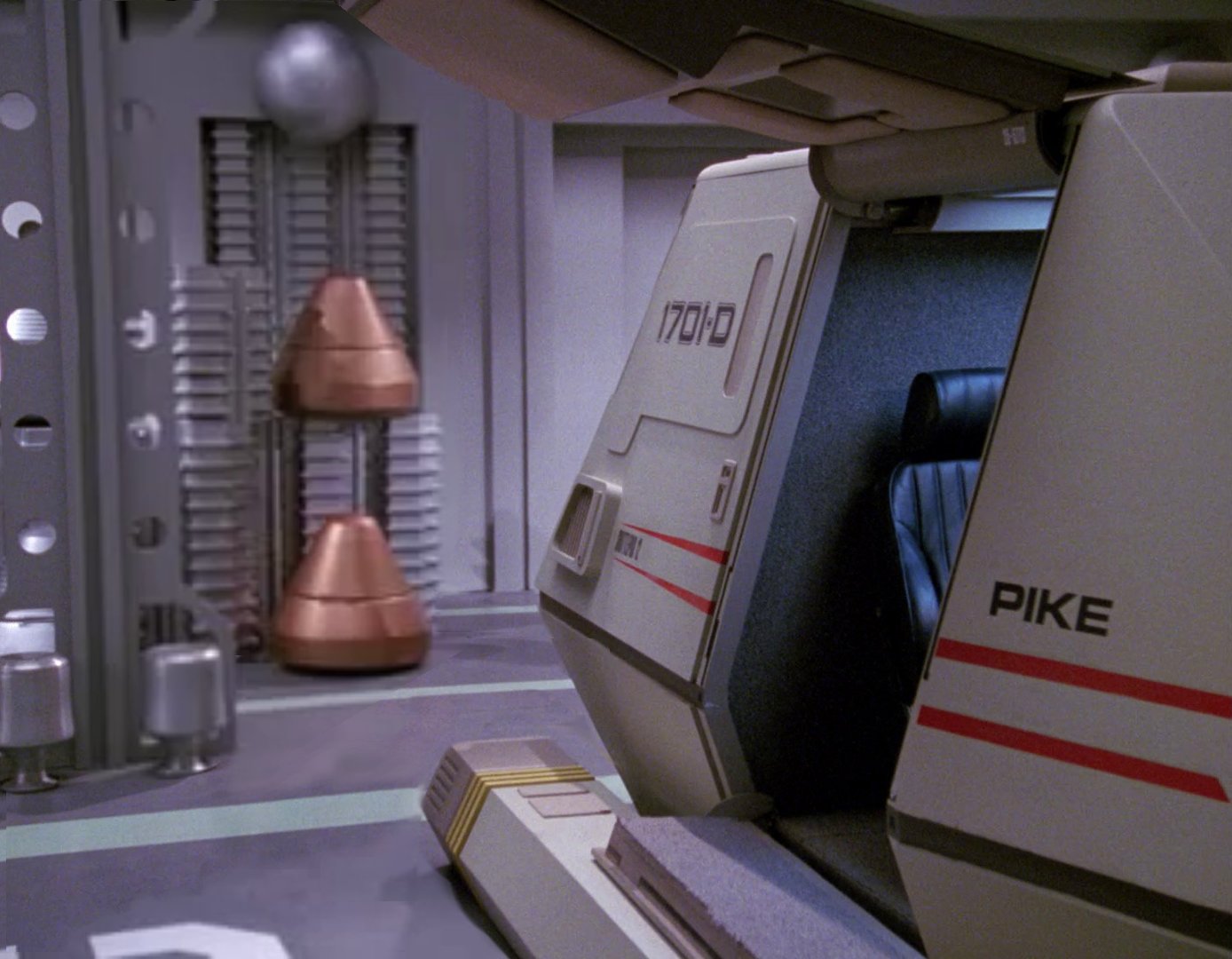 In addition from the information in the pictures I learned the prop was composed of 4 loose pieces. 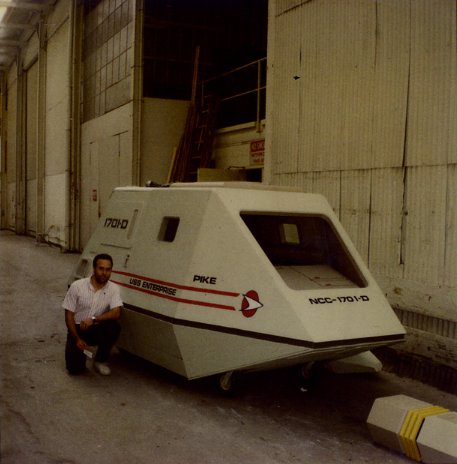 The main fuselage was on wheels to simplify moving the prop around the set. The engine nacelles were not attached and were simply placed along side of the main fuselage. The wedge under the nose was not in the original concept drawing and I believe it was added as an afterthought to hide the wheels. The stage crew tended to be inconsistent in assembling the prop. The engine nacelles do have left and right hand versions and sometimes they would reverse them. Also the nacelles would sometimes be placed further forward or further back than others. Sometimes the wedge under the nose would be upside down.

I also know there were several re-dresses of both the interior and exterior of the prop for various story lines but I plan to focus on the original El-Baz appearance,

I am still missing some details. I have posted in various Star Trek forums asking for any details on the original prop. I know it had been to some conventions in the 90's and thought some Trekkie might have some pictures, but no results. I contacted Rick Sternbach and asked him about the full set of plans and what became of the original prop. He actually did reply and said the full plans were probably in the hands of Paramount Studios and he has no idea what ever happened to the original prop.

I see there are a lot of Trek fans here who are also model/prop builders so I'm asking if any of you may be able to help with the following..

This is still in the design stage and would be my most ambitious build yet, but I keep thinking how cool it would look in my driveway.
Last edited: Jan 10, 2020
S

Go for it. Sounds like a fun project. I'm planning to build a full size TNG bridge within this year

StarTrek101 said:
Go for it. Sounds like a fun project. I'm planning to build a full size TNG bridge within this year
Click to expand...

Do you have a soundstage-sized space to do this in?
S

Yes. I have a huge, huge room in my basement that fits all the measurements. I'm also going to add the captains ready room and the conference room.

RPF PREMIUM MEMBER
Go for it!

Sadly the original is in the dump somewhere most likely.
S

That's the thing that stinks. People don't realize the importance of some things until after they take them for granted. The bridge could have been in a museum surrounded by fans. Mean while, when I start my project I will show my progress on a new thread for people to see. I really don't know how long it will take, yet. Talking specifically, I think the hardest thinks to construct are going to be the wood tactical console, and the star view images for the windows. I think I might have some functioning touch screens to turn on the power for the whole thing.

I have a thread on my forum with the graphics for the shuttle. You should check it out. LCARS for the Type-15 shuttlepod

Nothing new. Cannot find any additional info and am still unsuccessful in my efforts to contact Mike Okuda :-(

I am waiting for the release of the type-15 TNG episodes in HD. I may be able to capture additional details from them.


JoeRalat said:
I have a thread on my forum with the graphics for the shuttle. You should check it out. LCARS for the Type-15 shuttlepod
Click to expand...

I have seen that post previously, your site seems to be currently be suspended.

RPF PREMIUM MEMBER
Have you seen this?

Do they have pictures of it in either the Enterprise Tech Manual (for TNG), or the Star Trek Encyclopedia?

WOW! Please do, I would LOVE to see how it turns out.
I remember this episode "One Of my Favorite" "EL-BAZ" Nice design

anakin starkiller said:
have you seen this?

that is awesome! Thanks!
K

Hi Pyrojocky, I've been considering a similar project, not as detailed, as a Burningman art car. It would have an Argo or Max 6x6 as the base car, and the body would be created by a Shopbot from plywood or coroplast. May be some time before I start, but in the planning stages it would be very useful to look at CAD files of the basic hull. Would you be willing to share the CAD? Thanks.

Due to an illness int the family this project has been on hold for some time, but it is not forgotten. I jump back on it when I have the time. I am still working out the interior details and the frame construction. I have been unsuccessful in my attempts to contact Michael Okuda regarding the LCARS displays. I was able to get some screen captures from the remastered TNG episodes but there was minimal improvement. Most of the time the camera is focused on the actors, not the LCARS display.

I have however made some progress. I knew that many of the graphics in the various LCARS panels are reused over and over. With the HD screen captures I was able to identify patterns and match up 90% of the objects in the navigation and operations panels from the shuttlepod with their counterparts on the corresponding bridge consoles. These are clearly printed in the Star Trek The Next Generation Technical Manual so now I have most of the markings. I will post updates when I can.

trekcore.com is a great place to get hd screen caps from any episode that features this shuttle pod. I need to make a 1/6th scale one for my Dragon tng trio figures.

I've had it in mind to build a 1:1 scale replica myself for a few years now, but for some reason every time I bring it up my wife's not in agreement, lol.

Would probably help if our backyard was bigger than it is, so it wouldn't end up taking up too much room out there

Any chance you could share which pages in the TNG Tech Manual show the corresponding LCARS elements that were used for the Shuttlepod controls?

simonwaters said:
trekcore.com is a great place to get hd screen caps from any episode that features this shuttle pod.
Click to expand...

Nice find, thanks. I got some additional info from those. Unfortunately they are only part way through season 5. The shuttlepod is in a few episodes after that. Of particular interest are The Outcast, True Q and Descent parts I and II.


Eric Ardros said:
I've had it in mind to build a 1:1 scale replica myself for a few years now, but for some reason every time I bring it up my wife's not in agreement, lol.

Would probably help if our backyard was bigger than it is, so it wouldn't end up taking up too much room out there

Any chance you could share which pages in the TNG Tech Manual show the corresponding LCARS elements that were used for the Shuttlepod controls?
Click to expand...

I can relate to the wife issue, mine just doesn't understand why I need my own shuttlepod..