RPF PREMIUM MEMBER
I forget where this picture came from, but I took inspiration yesterday, made plans, and did a big thing today. 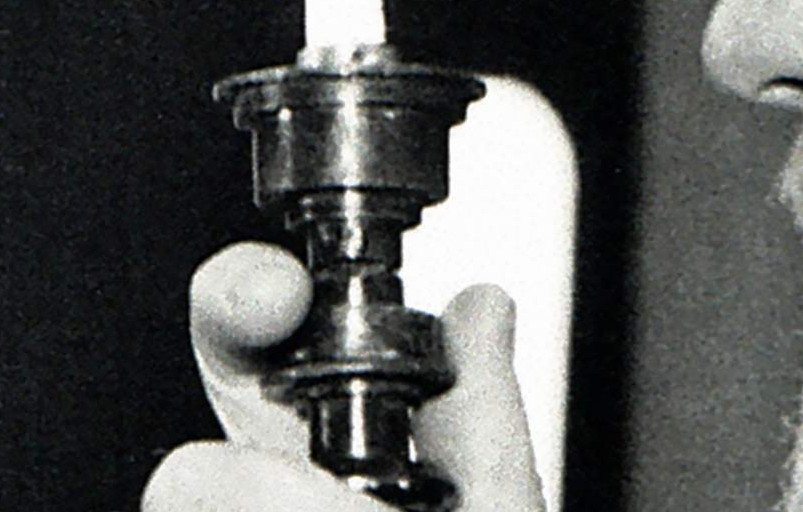 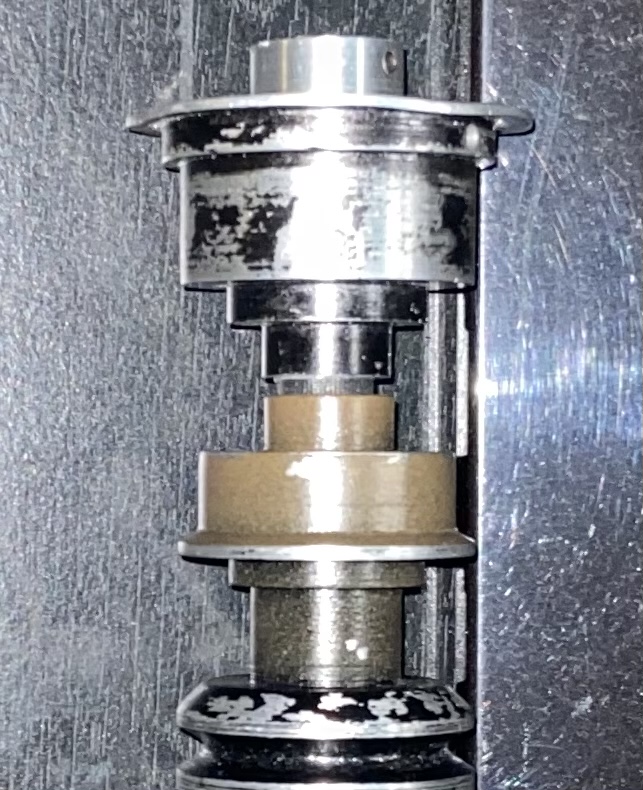 I am insane, after figuring out some of the V2 internals we knew but never thought much about… I made my own.

I removed the emitter stem (which I still think was a really good idea) and drilled and installed a cheap steel bushing. I kind of want to make a better one, it’s just pressure fit in there so I can probably twist it out and put a thicker one in. I used gaff tape as the shim, could have been anything really! Mine is a bit too clean

so, yes, I calculated the length of the bushing so that it would hold the emitter 3mm off the body. And there is no reduced area in the neck anymore, both pieces are the same thickness. The included recess into the body section made this possible too! 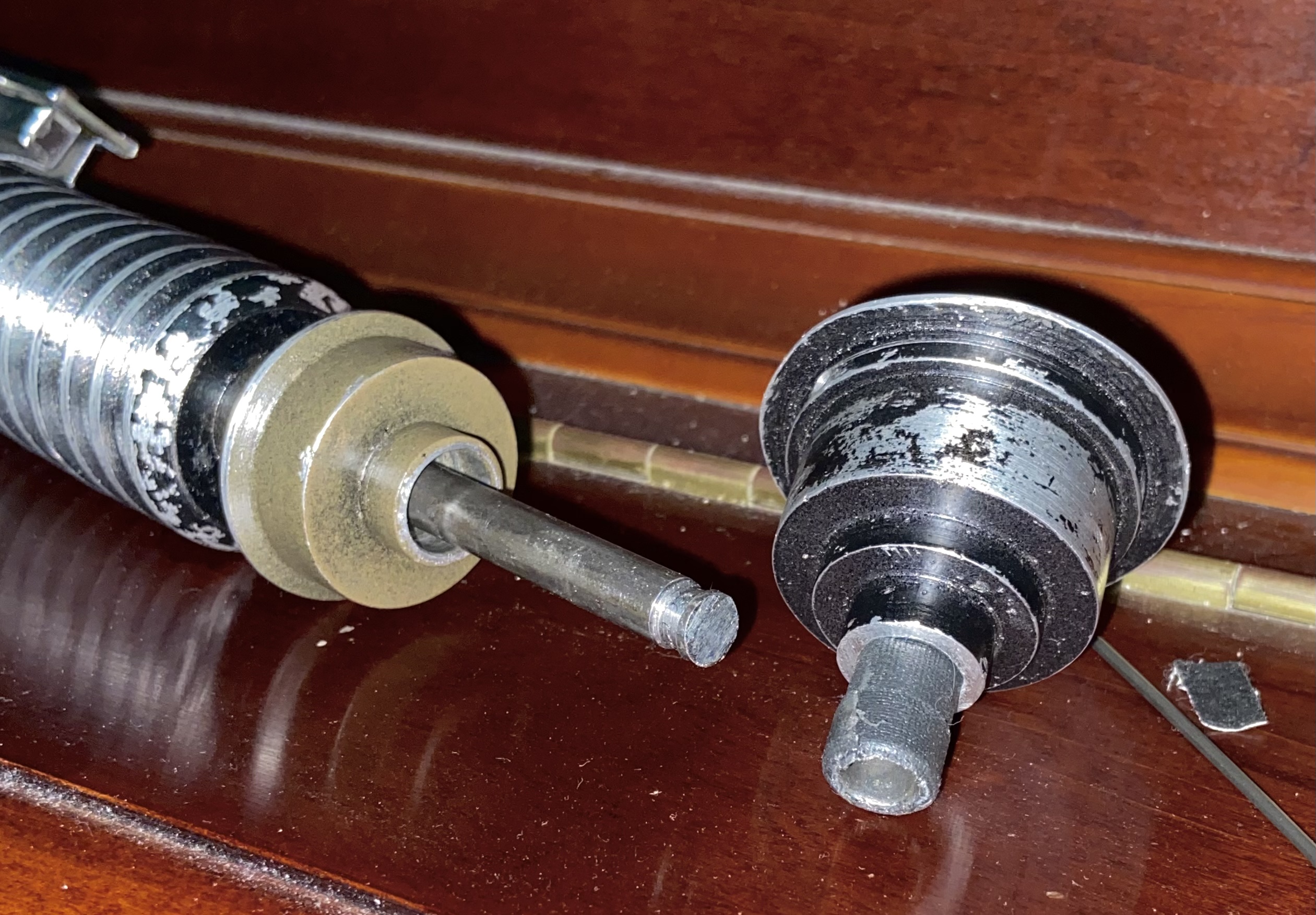 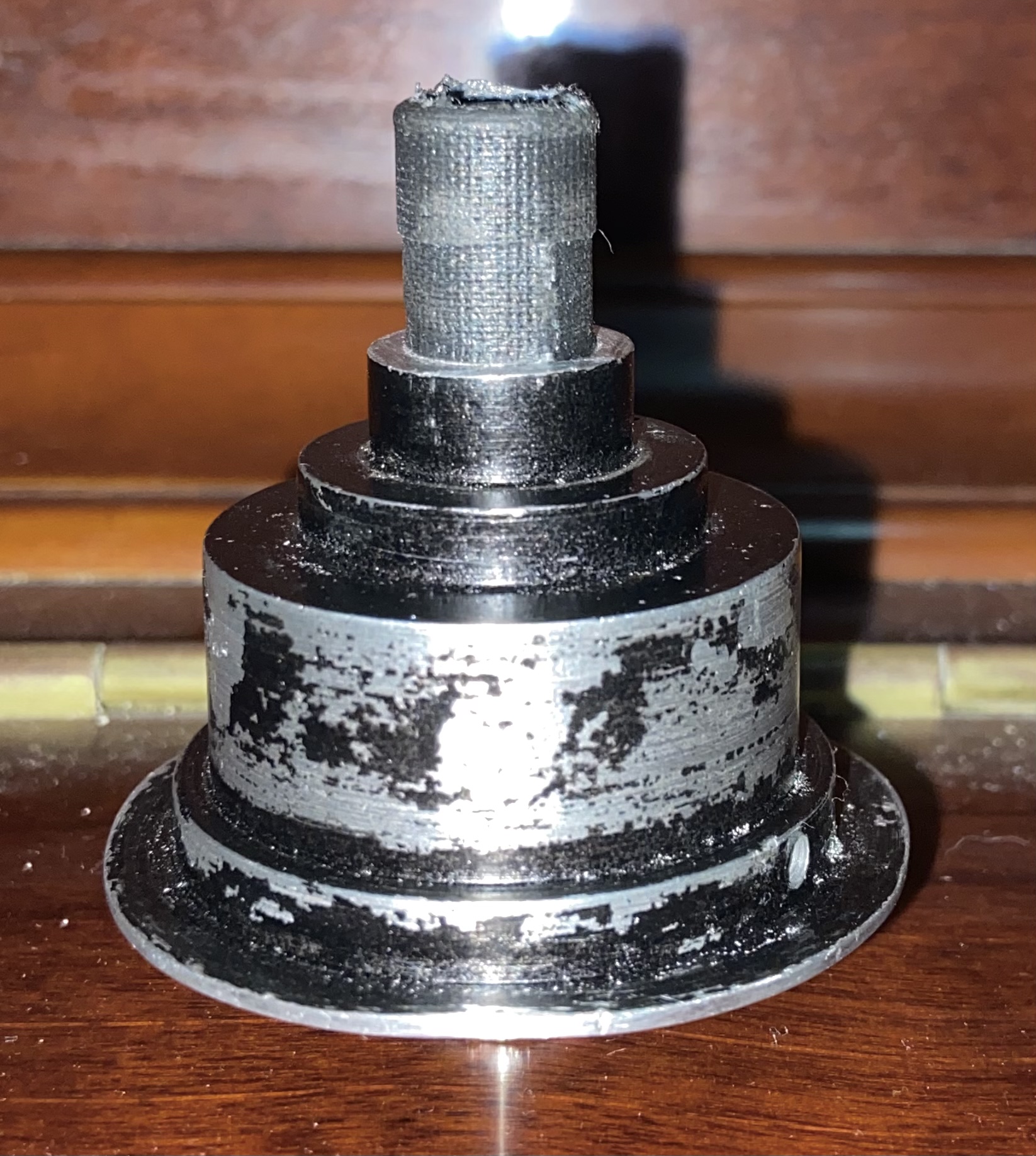 RPF PREMIUM MEMBER
I would really like to see the evidence that suggests this is what this is. I had this exact feature on earlier prototypes I made. I wonder what makes it that I should go back to it. Not that this would be hard to add to my current emitters, I just need to machine a little bit more further up the neck (this also fits with what Brandon has said about it). As a separate bushing, that's what I'm curious about.
Last edited: Jul 1, 2021

RPF PREMIUM MEMBER
Hey, so, I filled the blades with expanding window foam to mimic the foam in Vadermania's blades. it works. You don't need very much... I put too much in... and the excess that squirted out bonded to the blade. Like that Gorilla Superglue with a high amount of catalyst or kicker.... holy crap. Acetone and sandpaper saved the blade, sort-of

Also, drill out your tang hole only when the foam has cured. It needs O2 to cure, so it will most likely be sticky deep inside if you have a long tang on anything. Maybe it will cure now that I drilled deep?

Anyway, I put a base-coat of BBQ Black on the hilt itself. I am still in the process of picking the official colors. I also bought some 5/16 steel and cut myself a longer tang, like 5 inches or so.

in order to save money I realized I still had a square sample sheet of 3M 680 reflective film. Square.... so.. since this saber is a stunt that gets beat-up a lot... the "leftover" fx blade doesn't have to be perfect.

(I had already sprayed half the blade with black BBQ paint in the workshop. the trapezoid shape is wider than half, so you get very clean lines when you overspray underneath.) I was gonna maybe do a satin black coat over that, I still may, I can easily tape off... the tape. )

So, I got some painters tape, and put it on the floor at length. I measured the width I wanted at the tip and base of the antenna with a little piece of gaff tape for each. I placed them at the top and bottom of the tape, centered. connect the ends... then you have you trapezoid shape for the blade!

unfortunately, I didn't have a straight edge that was... almost 4 feet long.... so, being a stunt blade, I just said screw it and did the best I could. I was in the zone! it's not that bad.

** I laid the square of graphic film underneath the tape stencil, cut it to shape with an x acto blade, and then moved the leftover square of film up to the next section, cut it and did the last bit. This left me with 3 pieces of graphic film, matching, with painters tape on top of it all holding it together. I just peeled the back off, and laid the whole thing on the blade, smoothing it out. I think it's pressure/heat activated adhesive, so I massaged it down. **

like I said, not half bad, and I plan on abusing it a little

It is only 3.5x the hilt, but looks soooo much longer when lit up

RPF PREMIUM MEMBER
I made proper flat surfaces for the set screws in this project. (Didn't have a lathe to make a ring on such a long thing) Lots of measuring and fitting. Dremelled the area with a cutting disc and used a file to seat the area

RPF PREMIUM MEMBER
Update for y'all. I originally had placed an M5 grub screw in the windvane. I saw it in this image:

but the M5 was a bit too big. I don't know how to braze anything yet, so, instead, I cut the stem from an M5 machine screw and stuck it in the hole with some E6000. I used a dremel sanding drum and a fine metal file to smooth out the surface to match the curved windvane. The drilled the proper screw. My casual eyeballing and caliper comparisons gave me lots of measurements... 2.7, 3.3 mm etc. so it's probably an M3 screw. Lots of Rapid Tap lubricant and two different drill bits made it work. I also used a dewalt hand drill to run the threads with the tap after to clean out the channels. That was satisfying, albeit slow.

I then, of course, had to repaint the darned thing. Originally I had used BBQ black as an under base, and did some work to the emitter and windvane. This time, I used a proper final type of black paint and re-did the windvane and emitter to my liking, as some paint had worn off. Can you tell there was a plug there!?

It's not the weathered state it was in the warehouse video though. Not sure if I want to marr it up or not! 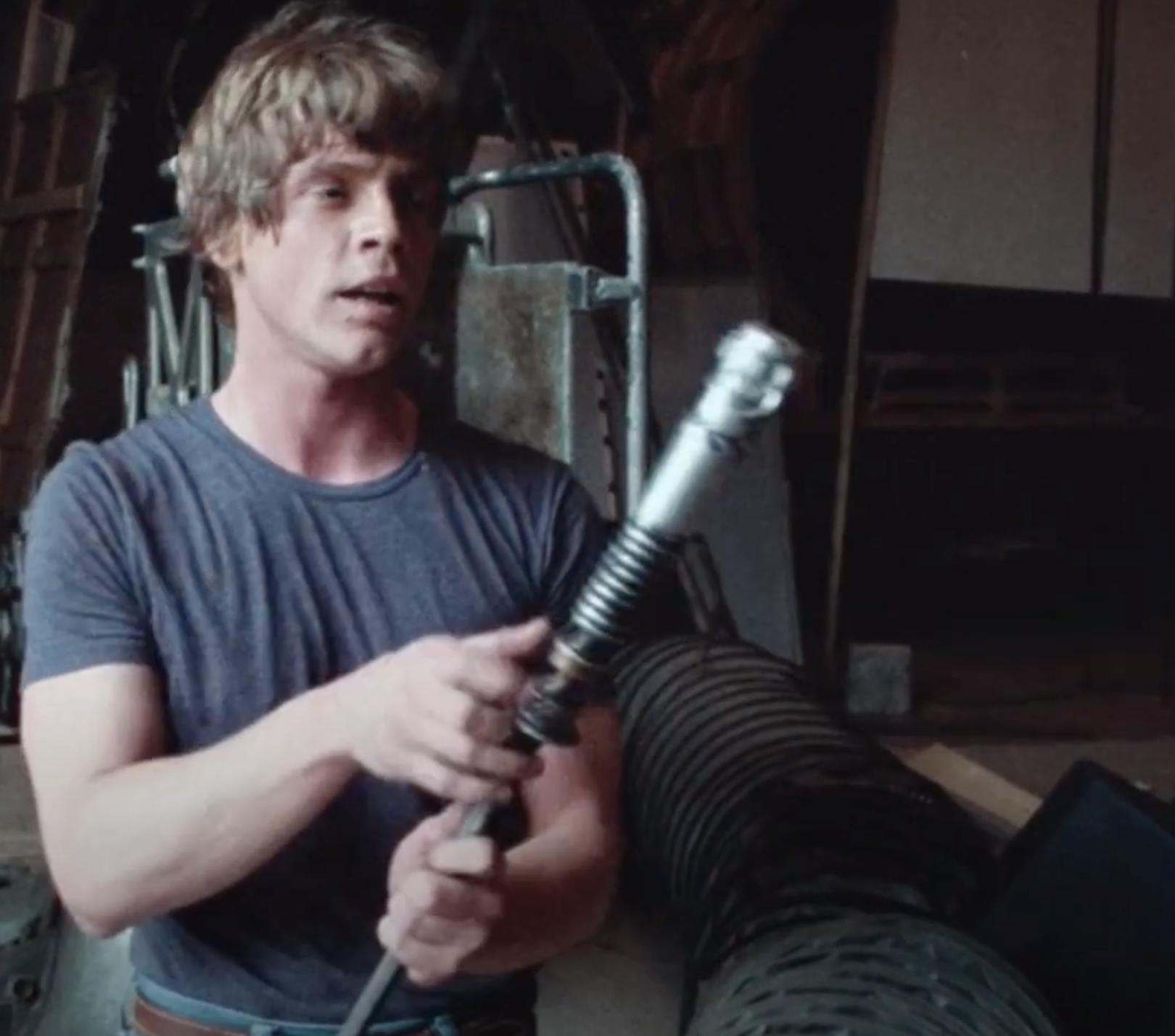 I think I still need a D ring and maybe a thinner blade! 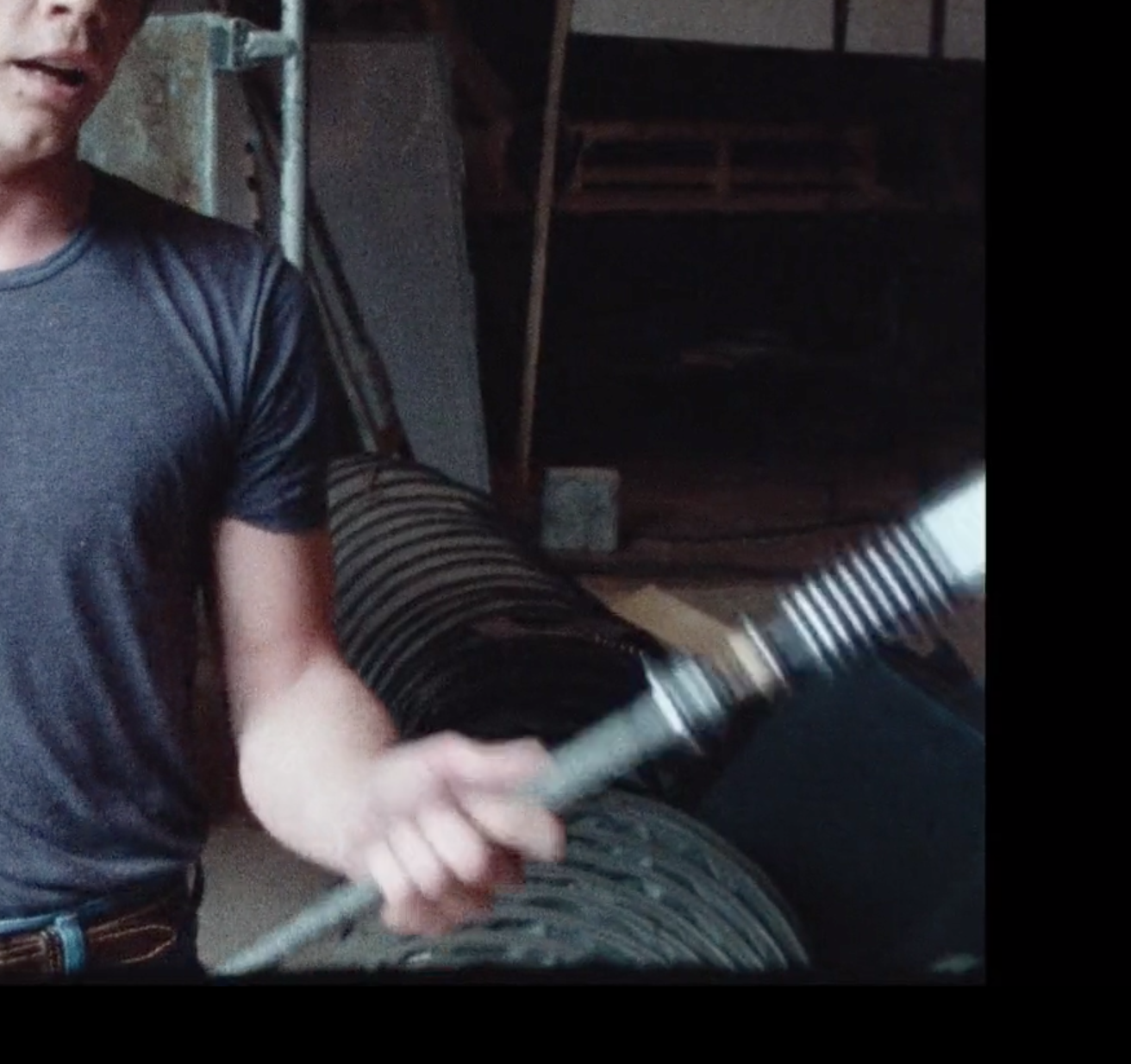 RPF PREMIUM MEMBER
I did some more work on this V2 of mine. This has certainly been a journey, and like asavage says, you follow the project and turn mistakes into custom work. I tried to add 2 more screws to the motor housing, and it turns out my M4 taps have a different thread pitch than my screws, So I grabbed the M5s. And on a DeWalt package the M5 tap is stacked on top of the M6 drill bit! So.... these are M6 screws now. Not really happy with this but... c'est la vie (click photos for larger version, they're huge)

I then had to re-finish the saber because I screwed up the paint while clamping it down to drill through. (By the way, I drilled perfectly aligned holes through both sides with rapid tap and my new understanding of feeling the right speed to drill... neat stuff...

So, out comes the Tamiya Lacquer for some custom details and a little aluminum black on the booster. You're going to laugh, this paint is so good, I couldn't remove the paint with Gaff tape like I usually do for weathering. It's just... stuck on. So, **** it, this is a mid-production paint job.

I tried to make the burn mark on the emitter with tape, black paint and steel wool

and added some overspray onto the body and acetone to the windvane areas. these details seem accurate

RPF PREMIUM MEMBER
We need a closer picture of that knob you tease!!

RPF PREMIUM MEMBER
Halliwax Here is the knob - I believe it is an M6 threading, there are 7 threads I can tighten, maybe 1 more inside - but there is some empty space that ends in a flat cone shape with a bump inside. The knurls are inverted like a bellybutton. 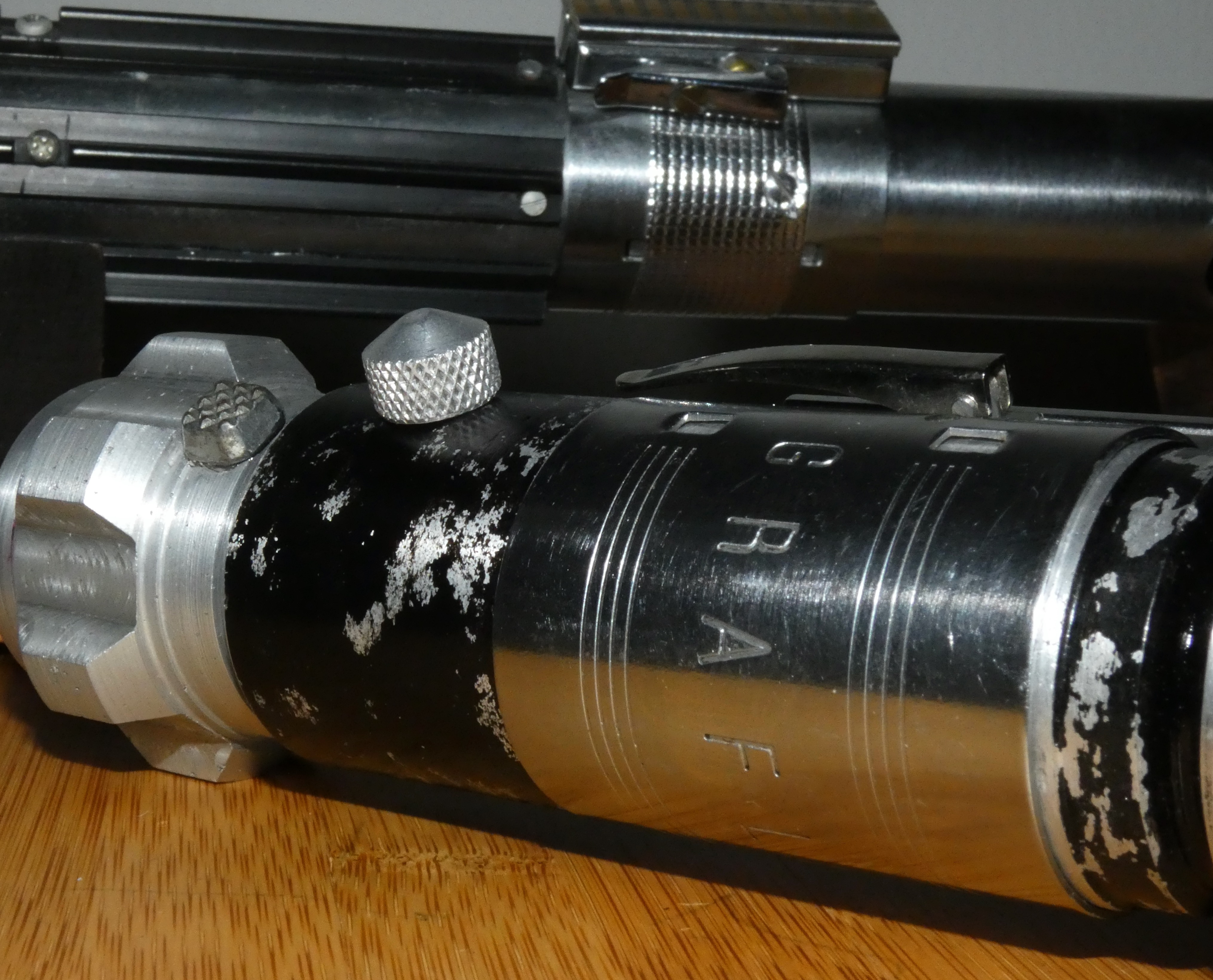 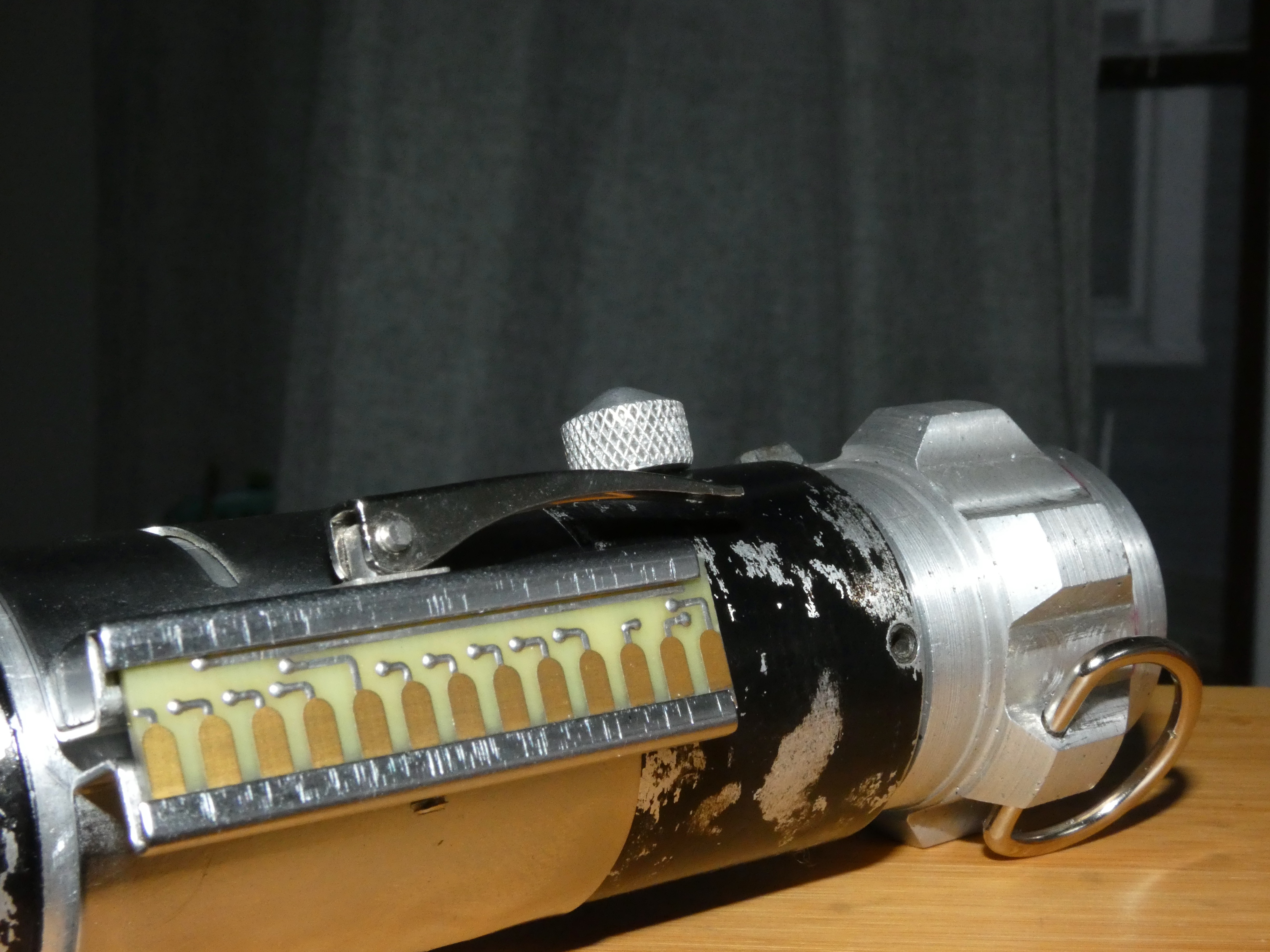 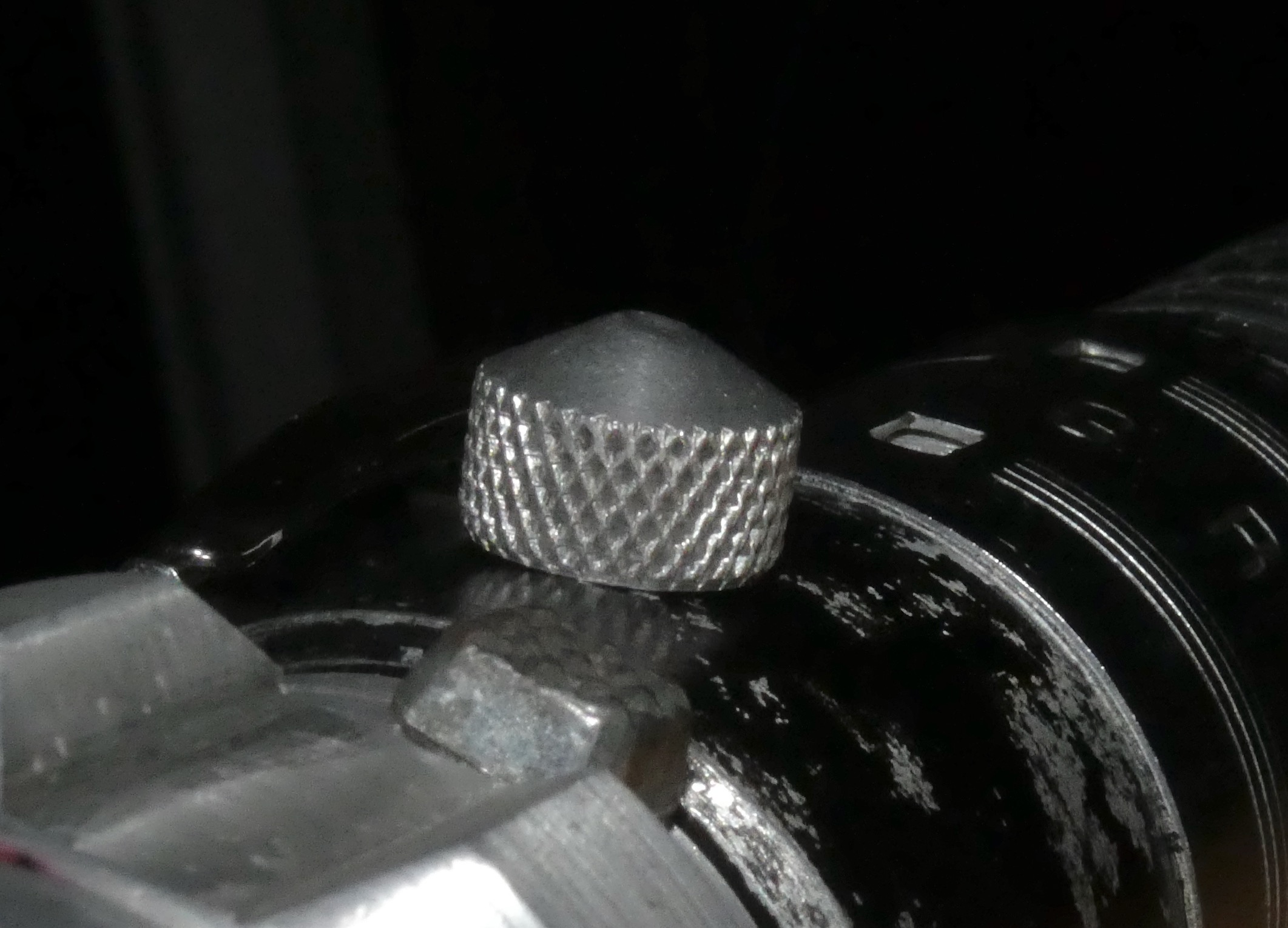 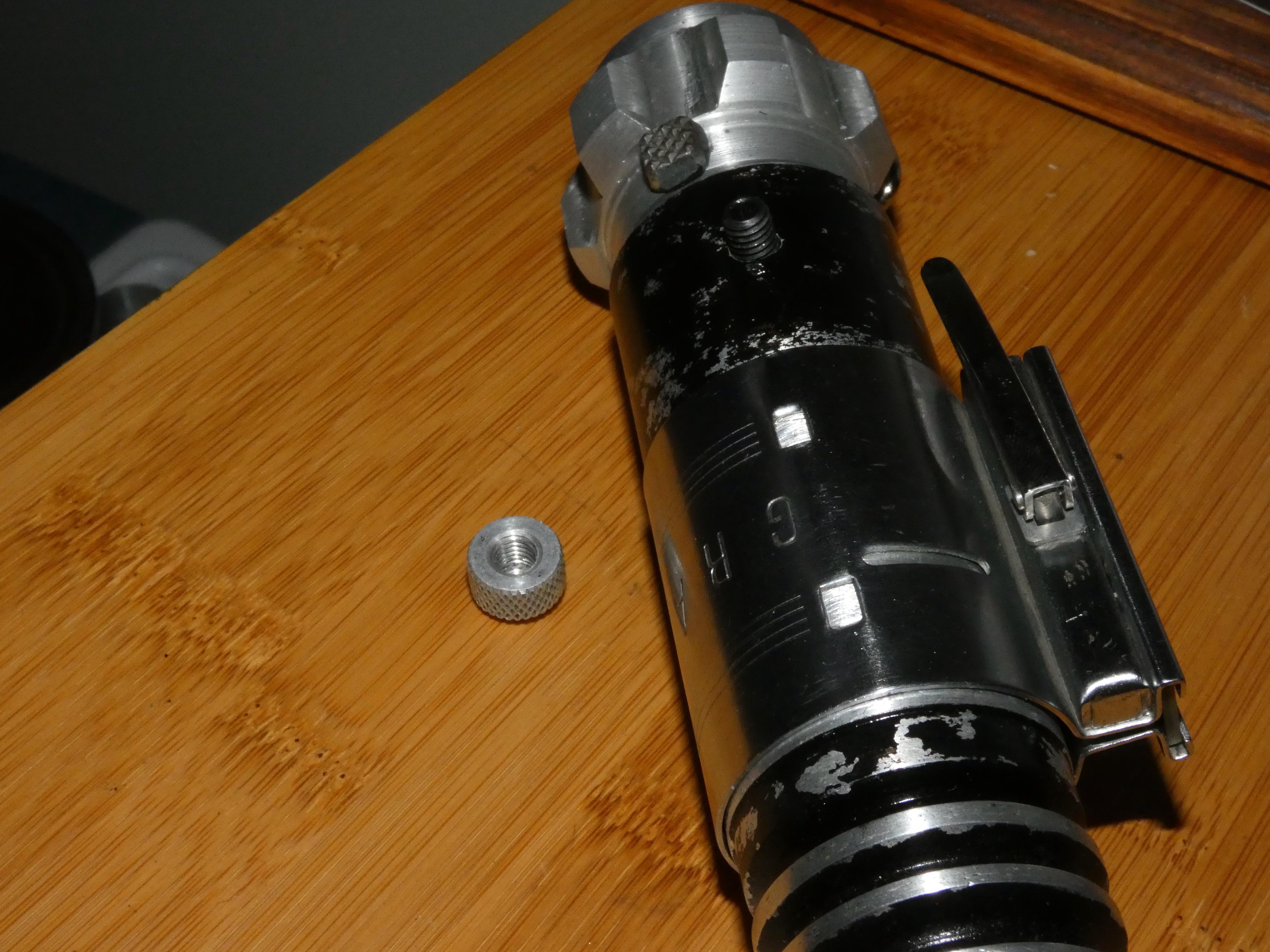 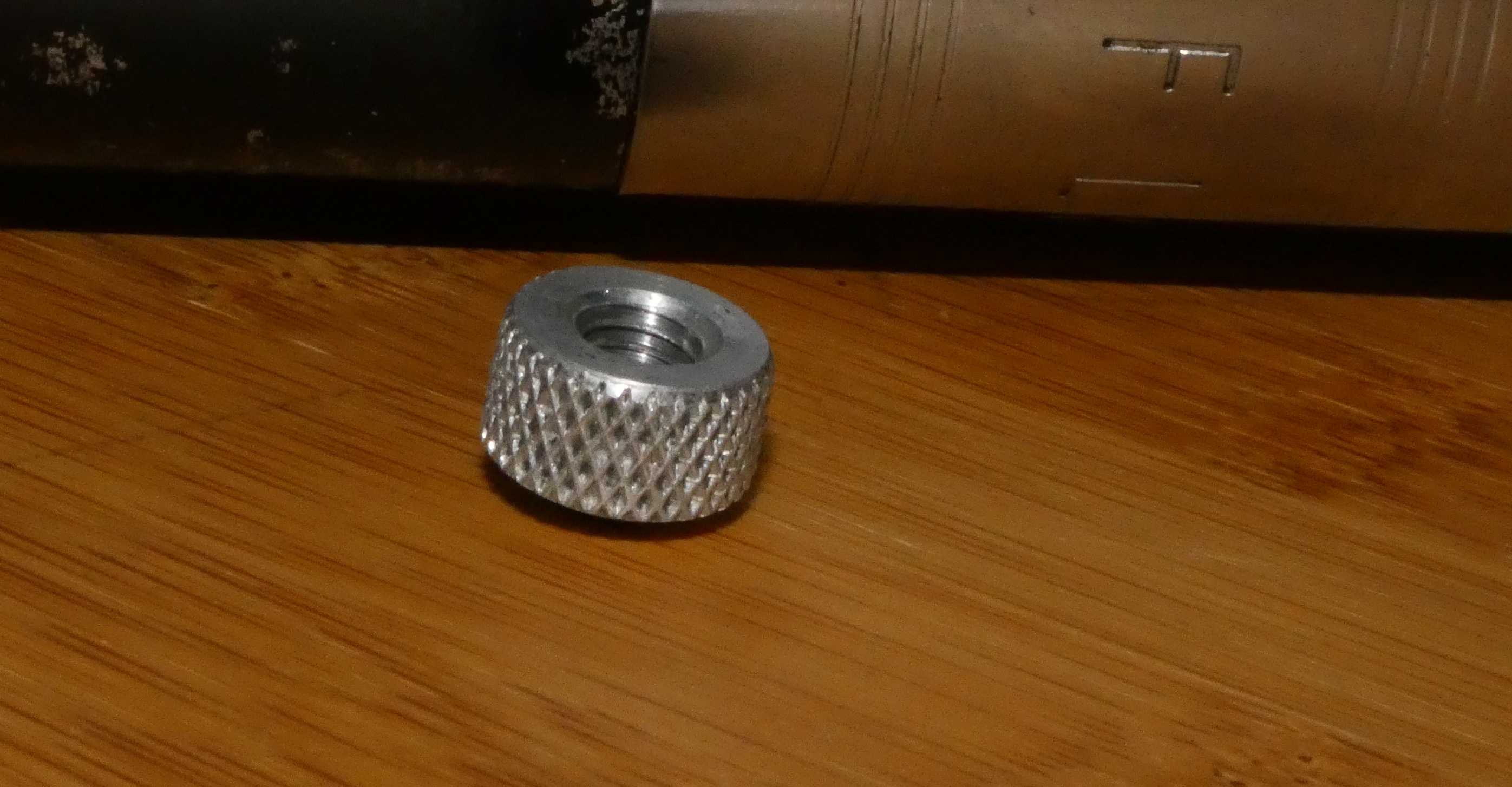 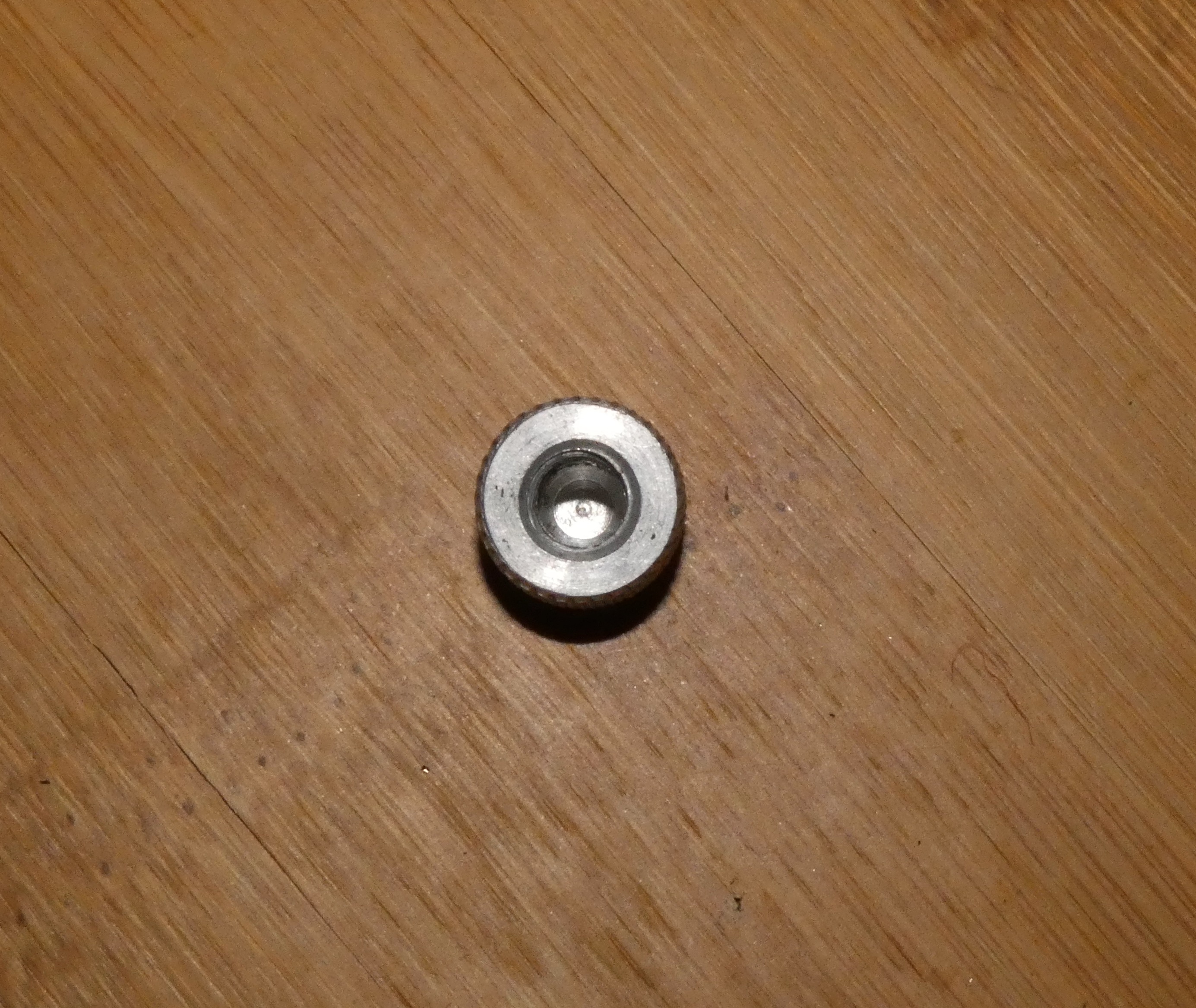 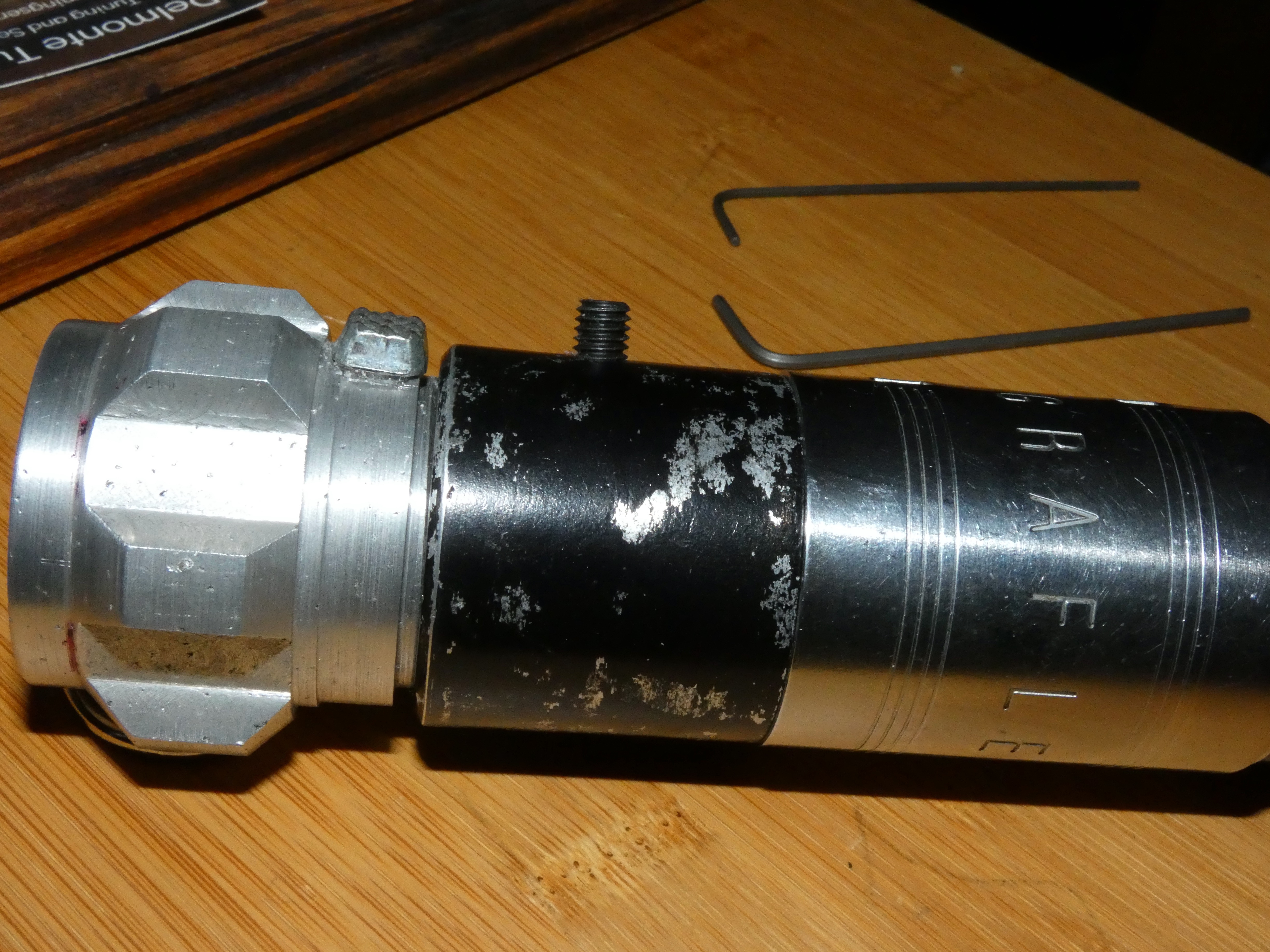 RPF PREMIUM MEMBER
6m for sure, I dont own a inverted one I need one to complete the collection

Halliwax said:
6m for sure, I dont own a inverted one I need one to complete the collection
Click to expand...

it's much deeper than I expected! They had a lot of confidence for not drilling through the damn small shape

hey if you have multiples of the outward knurling I'll trade you, but if not, I'm happy to have a unique special version!

I will say, it's awful aligning the nipple pinched by the set screws without the rod running through everything. Sometimes even with the rod, I tighten stuff down and the emitter tilts or slides sideways!

Wednesday at 6:43 AM
Anakin Starkiller