This is my first post. I thought it would be good to start a thread detailing my outfit display creation over the coming months.

To start, I have been a huge TR fan since I received the very first game when I was 10. That and Indiana Jones were both a large part of my childhood, but TR always remained the favoured. Years ago, in a tiny picture (which I have since lost unfortunately and cannot find anywhere online either, maybe someone here knows what I am referring too?) there was a picture of the Tomb Raider team in front of a display cabinet which hosted the classic outfit on a torso. It looked really cool and decided that I was going to do the same. As a bloke I cannot wear the outfit (obviously!) but I have always loved costumes being on display busts like the Bat suit. Therefore this outfit display is not intended for wear, but as a sort of collectors piece and homage to my 15 year long enthusiasm. (although I have conveniently bought the sizes in that of my wife just in case, hah!)

To cut a long story short, after collecting the odd bit here and there over the last 5 years, I have decided to make a push and actually do it. Since then of course, the release of the 2013 game has put me in a new direction. This game was fantastic and really saved the franchise as far as I am concerned. Now my outfit display is going in the direction of this new reborn style.

I love things to be accurate, so I will be trying to create it as if it really were the actual outfit and tools that were used in Yamatai. HOWEVER, at the moment, the tank top I have started with is more a green/blue like the classics. Whilst I would dare say I actually prefer the new take on Lara, I felt that I needed to keep something of a tribute to the franchises success, and that is her iconic colour. I will do a grey tank top at some point, probably the last thing, but for now I'm sticking with this colour. Everything else will try to be as accurate as possible.

There are alot of truly great TR costumes out there, some of which has really pushed me on to finally do this piece. In partiular Kristen Henry who just did a superb job with the accuracy of hers, which I have taken much advice and inspiration from. Not to mention some of the other great cosplayers out there.


So, here we go, a quick sketch (minus the bow and quiver). I was just fleshing out what I wanted to do. It will sit in a custom display cabinet once completed, along with a reference photo at the bottom.

some quick snaps so far.

I bought a mannequin and have covered it in plastic whilst I distress and paint the clothing, I do not want to ruin it. I have painted scale models for years so this was just like painting and roughing up a life-size version! I have used my airbrush mostly, although it started playing up so I had to finish up with sponge brushes. There is still plenty of colour adjustments to do like more browns, but this is it so far.

I am quite pleased with the strap sizes of the two tops. I purposely bought two different styles so that the blue straps would sit nicely in the wide white ones.

The bow is just plonked on temp and the shirt will be tucked under the body and sit flush. This is very much a WIP.
I have actually done a few more bits to this since so I will snap some shortly and post up - including more dried blood on the right (our right) where the stick goes through her side in the game. My DMM Rebel arrives tomorrow so cannot wait for that!

All comments and feedback is welcomed and I will post up again shortly. Would be great to hear from others also who have made their own TR outfit. Thanks guys!

As mentioned, here are a couple of extra shots. I can't do much from here as I am awaiting delivery on the bits so I can make the holster which will hopefully be next week. My ice axe was supposed to arrive today but did not Have a great weekend!

Bummer about the axe not showing up.

A quick update on the start of the belt and holster. Lots of cutting, hammering, distressing and painting to make these....the 3 rings on the back to hang tools from.

Now it currently sits like so. Waiting on the holster part now which will need tweaking. Getting there slowly.

I've been more productive over the last week - continuing on with the holster. I am actually really pleased with how this has turned out.

Throughout this project I am making the parts out of 'real things' rather than making up my own templates etc. Reason being is, as this is for display, I want it to appear almost as if it were the real costume, so I have opted against foam and the like. Using an old holster, chopping it up and adapting it gives it a real leathery, bodged together piece - Don't shoot me for butchering a cool holster! Sorry!

Here are some of the progress steps.

I managed to buy an old holster quite cheap of an auction site.

I then chopped off the lid and used parts of it to extend the left back panel (so the gun would still fit) and the rest with the latch to create the magazine pouch cover, which this holster did not have. Then created a slit on the right for a bit of the belt to get through and under. Here's the result

Now all I need to do is create the leg wrap for it, then colour match to the rest of the belt. It feels nice to hold so pleased so far.

Oh and on another note - MY AXE FINALLY ARRIVED YAY!

I will probably make a resin cast of this as I need to make it battered etc, but do not want to ruin this real one really 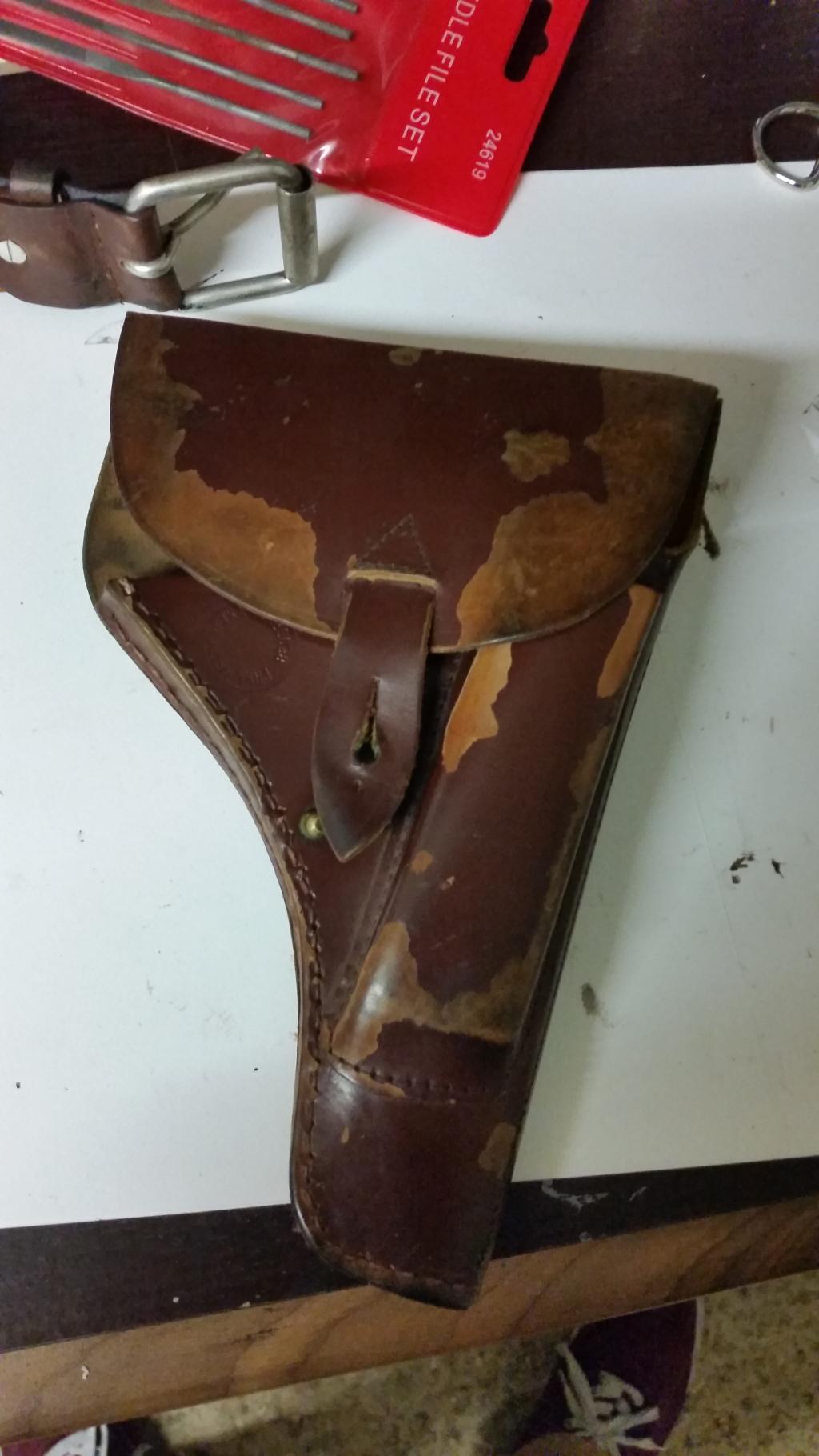 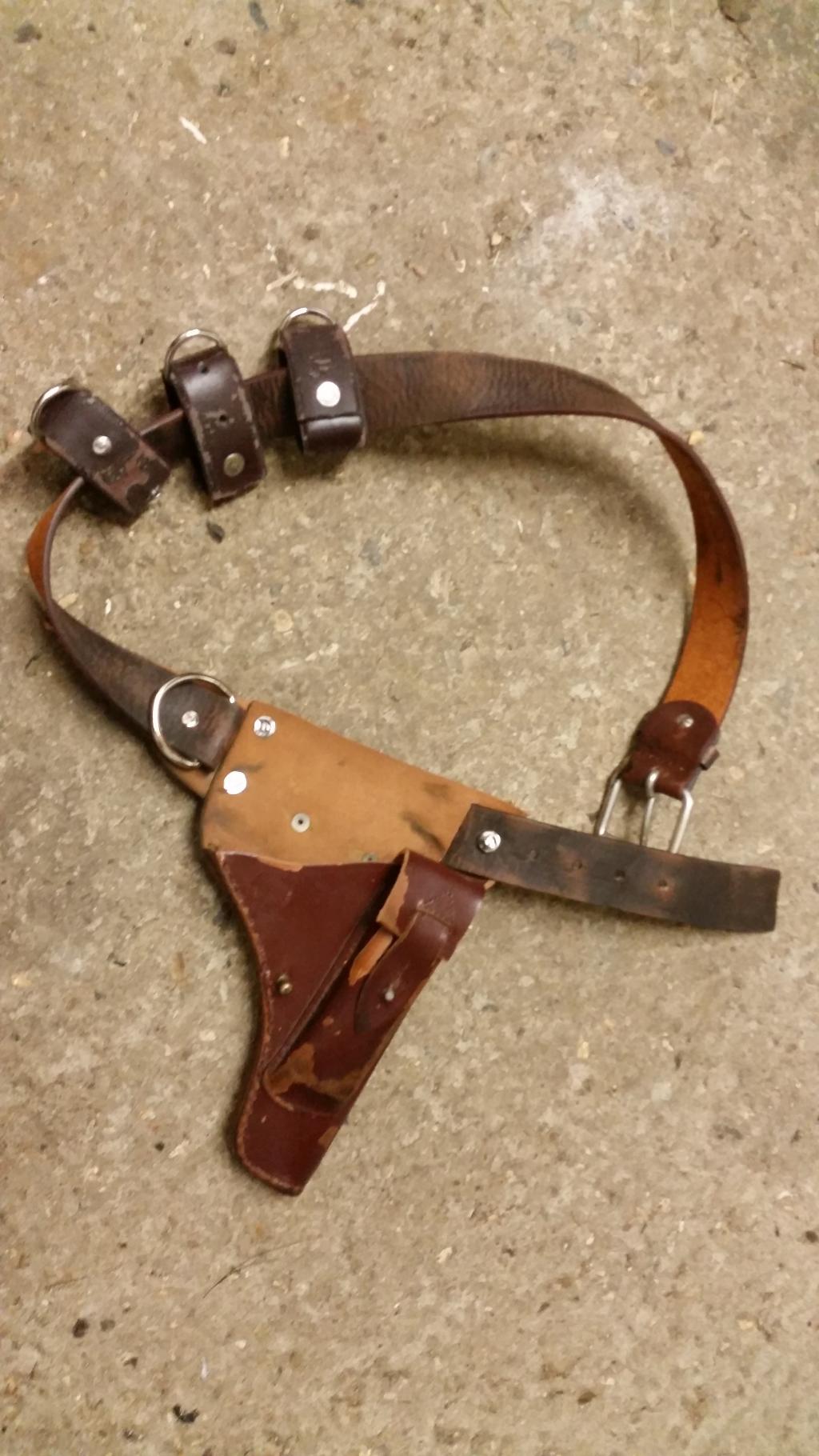 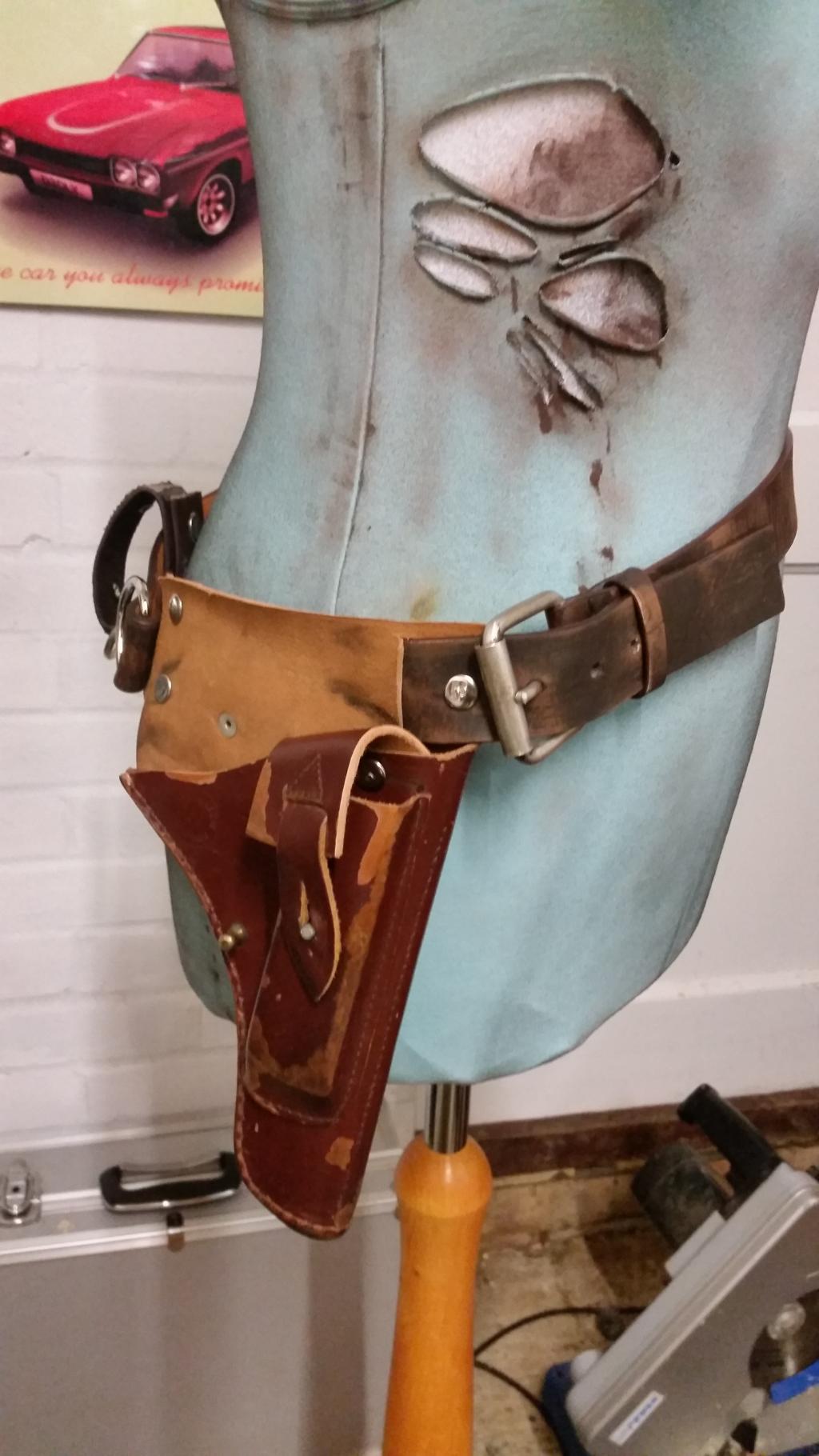 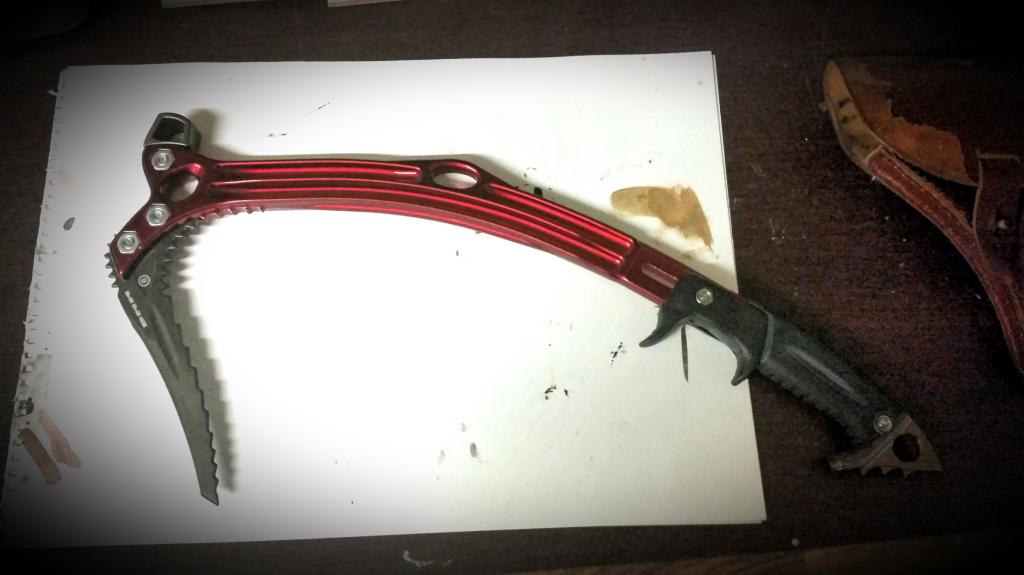 LOOKING GREAT! And I do love that you're using older/existing pieces. You're absolutely right in thinking it'll bring more character to the display as opposed to a "manufactured" look.

And yay on the axe!

A quick update. I have started colour matching the holster a bit better and placed the axe in place - I have not put bandages or anything on it yet as I want to make a cast at some point.

Materials for the pouches, necklace and rope are all on their way so hopefully I can start those soon.


Climbing rope - This stuff is expensive! So I found a cheap alternative at a local store for about £5. Dipped in black watery paint and then dry brushes it with various dark browns. The original blue still shows through which is good as it's supposed to be well used. I will probably swap this out for a more traditional rope colour if and when I come across it.


Pouches - Found some great pouches on an auction site. One is vintage and the other is new. Both will need distressing. The one nearest in the photo is actually the perfect size for a jaffa cake box. How handy!


Gun - Is just temp until I get the correct one. Had this cowboy gun lying around The holster felt empty with out one!


Belt - Secondary belt is now in place. Needs a bit of colour matching. I am debating if I should get some cheap cargo pants and just cut the top off for the display with the belt in place. It would neatly fold under the stand if I chopped the legs off. What do you guys think?


Awaiting on a necklace I ordered but delivery is not until the end of the month which is disappointing. Patience, I must learn!


Quiver will be started next month as I have spent enough on this for one month!