About a month ago I started on this project and I thought now might be a good time to get some feedback on what I'm planning to do because eventually I'll be doing a run of these.

I'm creating the "definitive" Tobin's Spirit Guide. A lot of people have the RPG version of the book but I always found it disappointing. For starters it's full of RPG stuff which takes away from the feel of a real reference text. My biggest problem with it though is that it's clearly written for kids. By that I mean that the writing is cute and light hearted. Not nearly what the true volume from the films would have been or was meant to be.

I'm no stranger to printed props. In past I've done the Grail Diary, Rasputin's Spell Book, and countless other smaller items. I've even made a starting dent in the Gutenberg Bible (that dream is not dead!).

I'm creating it do be organized in a similar fashion to how the RPG Tobin's is laid out. It will have 13 sections:

The book will have a publishing year of 1920 so the hope is to write it as a text of that era would be written with all the predjudices of the age (hence the "Dark Continent" instead of Africa and "Former Russian Empire" instead of the Soviet Union). The idea is to include every pre-1920 ghost/spirit from all the different Ghostbusters films, games, and cartoons. For filler I'll be adding famous ghosts from other sources, both real and imagined.

I already have some help on this. dbalschi has graciously taken on the RGB ghost list and has been doing research for me sending me notes on each goul. He will be rewarded with a free Tobin's and his name in the story of his select ghost (but I won't tell, you guys will have to find it!).

Organic Mechanic has also sent me his 1950's volume of the Encyclopedia of Deamons and Witches which I will be able to pull some valuable info from.

For the presentation I have a large collection of books from that era (WW1 is one of my favourite history topics and so I have a lot of first hand accounts from 1912-1922) so I think I'll be able to make this look very accurate to what it should be.

For illustrations I'm thinking sticking with B&W ink drawings in a similar style to this gentleman's work:

When I do finish I will be getting these professionally printed and will be using edition numbers to mark my runs. First Edition, second edition, etc. That way those who get them early can still have the feeling of exclusivity. I would LOVE to get one of these puppies signed by all four ghostbusters!

So. What are people's thoughts? Are there any pre-1920 ghosts from outside the franchise that you'd like to see in the book? Does anyone else want to help Daniel and I with research?

Any and all thoughts/criticism is appreciated! This is NOT an interest or sale thread. I'm looking for your imput.
Last edited: Jan 23, 2013

This sounds like a fantastic project. There are indeed a lot of great references on the Real Ghostbusters cartoon, throughout the series. I wish I saw this sooner as I am on the tail end of a marathon and could have provided some screenshots if I remembered which episodes showed pages of the book. It might not be too late. :lol

PM Sent I will have you that info!

Here is a shot of the RGB book, which I am sure you have seen: 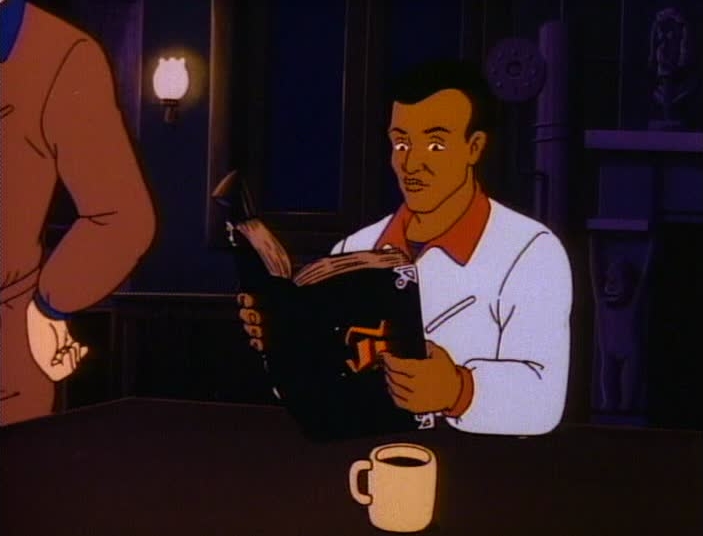 Once again, sure you saw this, but this is a great site that lists every episode of RGB that references the book!

I own every episode, so let me know if you need any screenshots.
P

As a person who loves to have prop books i think this is a great idea.

AS a GHOSTBUSTER, Its an ABSOLUTELY AMAZING IDEA!

When i get mine, i might try adding some post its with "notes from egon" giving some references to the episodes or such

You need Hob Anagarak, the First Demon! The critter that was frozen in Black Ice by Inuit shamans, and doing so brought about an Ice Age.

Thanks for the pic & link. I've seen a lot of different resources so I couldn't tell you if I've seen them or not.

I chose the 1920 date based on the RPG copyright date but just a glance at your link says I should probably make it late 1920's so that we can get the Gozer stuff in 'cause we know it's in there.

For the look of the book I want to stay as true to real life as possible. This won't be a "cartoon accurate" book (although you could convert it easy enough). It will however be black with simple gold foil lettering like a true reference book of the period.

Wow, very interested in where this goes. My girlfriend would be able to help with some weird foreign ghosts like Indonesian pocongs and japanese stuff, not sure if those would be relevant.

EDIT: Btw, do you need writers/editors for this so you aren't simply cutting and pasting from real "ghost" reference books?

Holler if you need any help! I don't need anything in return, just glad to see this getting
done correctly.

@Protokev - You'll get a PM from me this week.

@Benhs - I would absolutely love Indonesian & Japanese input! I'd like to flesh out all the different regions as much as possible. For writing I'm writing it myself, by that I mean I'm taking the reference material and giving it all a "common voice" rewriting it to fit what I need. I would be open to help in that regard but I'm really keen on the whole book reading like it was written by one person. Same with the artwork.

Good idea on the "one voice" thing. I would love to read some of what you come up with if you feel you want an editor.

I can also see if my girlfriend will help. She has an entire book about japanese ghosts. Perhaps if I get some time I could type out some of it for you.

Very cool, I remember Fifthrider book from the Proptopie Forum. It includes the pages from the game...

I want to make it myself, just the easy version, print the stuff out, and bounded in black leather, thats it...
C

I think this is a wonderful idea! I'm excited to see how it turns out. Making it one of those leather-bound-stuffy-old-library-reference-styled-books is perfect :love


benhs1898 said:
Good idea on the "one voice" thing. I would love to read some of what you come up with if you feel you want an editor.

I can also see if my girlfriend will help. She has an entire book about japanese ghosts. Perhaps if I get some time I could type out some of it for you.
Click to expand...

Having an editor is never a bad thing. I'm still fleshing things out (have chapter 1 just about finished but think I will make some changes) so when I have a more solid base I'll look at having it reviewed.

Japanese ghosts works for me! I have a feeling that the European chapters will be the fullest so anything that beefs up other regions would be very appreciated!

More info coming your way when I get to work.
W

I'm a bit late to the party but I bet you can find ghost stories and legends from before the 1920s floating around the net. Too bad the jersey devil isn't a ghost as I've always been fascinated by that legend.

I'd be in for a first edition :cool (add me to your list when done)

not sure if I can help out in anyway, some uk ghosts perhaps, what sort of stuff do you need?


Wes R said:
I'm a bit late to the party but I bet you can find ghost stories and legends from before the 1920s floating around the net. Too bad the jersey devil isn't a ghost as I've always been fascinated by that legend.
Click to expand...

Well in the RGB, the book covers more than ghosts, and includes gremlins, witches, and other things that go bump in the night.

Mothman maybe? My girlfriend LOOVES the mothman. She's also into some weird cryptozoology as well. I think I am going to the mothman museum. Could bring info!