Visit the Project Run thread for details on ordering


"The smuggler Han Solo owned a pair of gold dice that he used to play the sabacc variant known as 'Corellian Spike.' During a game of Spike against Lando Calrissian, Solo won his opponent's YT-1300 light freighter, the Millennium Falcon, thanks to those dice. Solo kept the gaming devices and hung them in the cockpit of the Millennium Falcon as a lucky charm." -Star Wars: The Force Awakens: The Visual Dictionary
Click to expand...

After seeing The Last Jedi, I just knew what my first project was going to be. Han Solo's Lucky Sabacc Dice. These are seen hanging in the cockpit of the Millennium Falcon. They are shown in no less than three separate scenes in the movie. 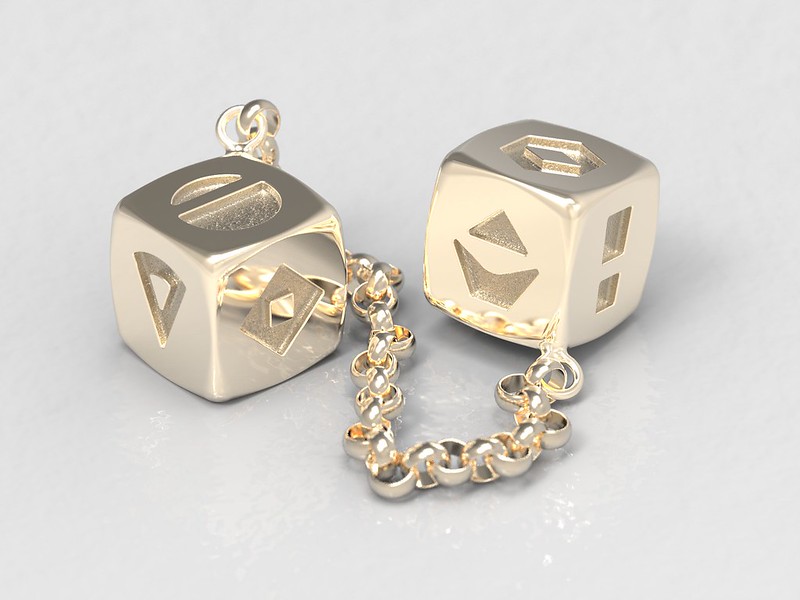 They are held by Luke, Leia and Kylo Ren.
There is of course much more to say about these dice in the Star Wars Lore, but it would be too much of a spoiler at this point.

I carefully compared all the images that I could find and extracted the sides of the dice. Looking at the hands it is held in, the dice seem to be standard 16mm dice. Considering that the Force Awakens dice were regular "Earth" dice with dots instead of symbols; I bet the original prop was just some common dice painted brass or gold. These "Earth" dice even made into the Visual Dictionary and on Wookieepedia.

In The Last Jedi they updated the dice with some nicer symbols. You look closely you can see that the symbols even make some sense. The "i" symbol is one, the "split circle" is two, and the rest of the symbols work off of how many sides each icon has.

The sixth symbol was not very visible in the film. However there are leaked images of TLJ Visual Dictionary out there, and in it you can see some "Hazard Toss Dice" with some familiar symbols on them. This unlocked the final six symbol and I could get to work designing a 3D printed version. I will make these available on my Shapeways store, see the Project Runs link at the end of this post.

First I drew the symbols in CorelDraw over the cropped screen captures. I then had to carefully figure out which symbol went where, and in what orientation compare to the surrounding symbols. Once I had that, I exported them into SolidEdge to convert them into a proper CAD file.

I added a built-in chain loop. A screw-in loop would be easier to break. I added rounds to all of the corners, as this will make it closer to the smooth nature of the dice in the movie. The actual movie dice is quite a bit rougher in the shape of the symbols and aged, but that can be done by hand if needed. 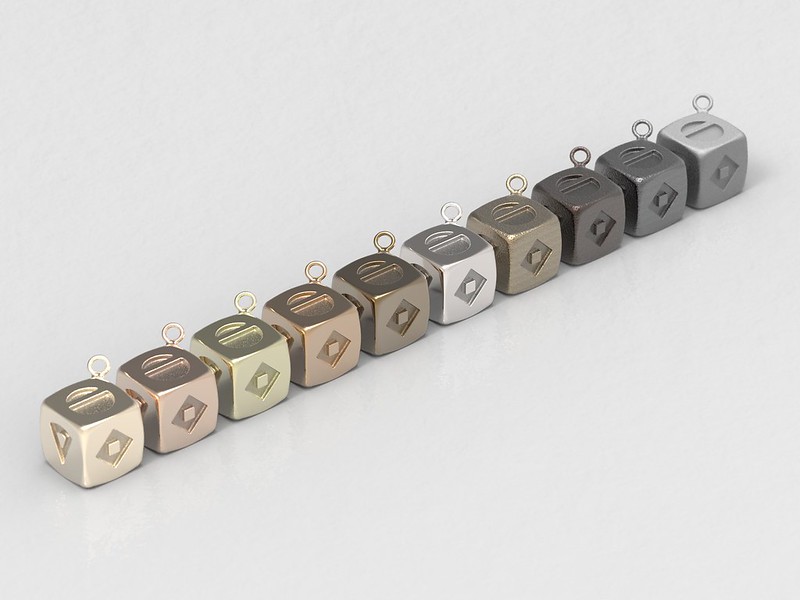 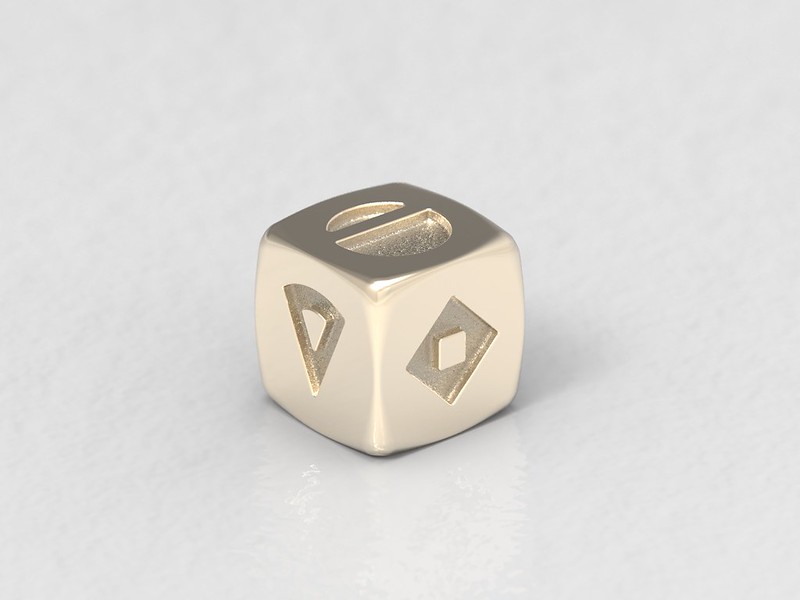 I created some photo-real renderings. Again these are NOT photographs. I hope to have the actual part in a few weeks.
I have also created a pendant, and single game-ready die version.

This was a fun one-day design. I won't be releasing the CAD files until the Bluray release, in case I missed some detail.

Visit the Project Run thread for details on ordering

RPF PREMIUM MEMBER
I am going to assume that these dice will be depicted in the "Han Solo" movie; probably in the game in which he won the Falcon.

Made a quick 3D model of the dice.

RPF PREMIUM MEMBER
TB-7021 if you going to put the design on Thingiverse I might as well do so too.

Here is the game-ready dice version.

I am using the CC, Attribution, Non-commercial licence to protect at least against some of the eBay/Etsy vampires. If your going to use CC Attribution, perhaps you should credit the source as per the licence.
Last edited by a moderator: Nov 8, 2018

RPF PREMIUM MEMBER
Both sets of dice look great thanks for sharing. I know what i am going to be printing when i get home.

RPF PREMIUM MEMBER
I updated the dice design to be much closer to the movie.
Modeling dice in a vertex editor is actually pretty easy, but modeling them in a parametric program is hard. Getting just the right corners required a lot of experimentation.

I also added more finishes to the end product.

RPF PREMIUM MEMBER
I added the 19mm size, as well as raw brass. For those wanting Casino sized dice, or want to polish and plate the dice themselves. 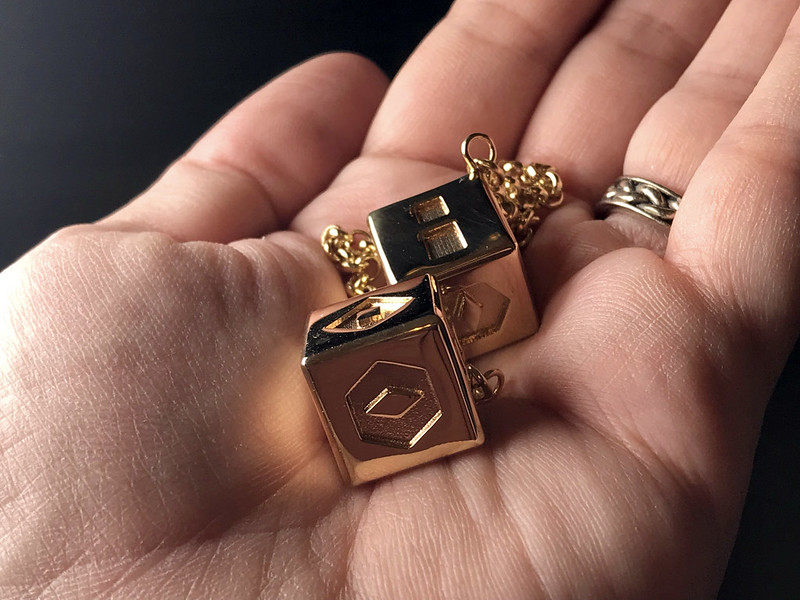 So my prototype has arrived! The prototype, as the current version has more accurately rounded corners.

These are the 16mm size, and I have to say that I am happy with the size. I also have a 19mm prototype on the way in a plastic just to see the difference in size.

I had the prototype printed in polished brass. And man are the dice beautiful. They are also heavy. The brass has not started to tarnish yet, and it is as bright as the 18K gold chain I have attached.
(The chain I ordered is here: https://www.amazon.com/gp/product/B01M2622UP)

Click on any of the images to go to the projects run page. 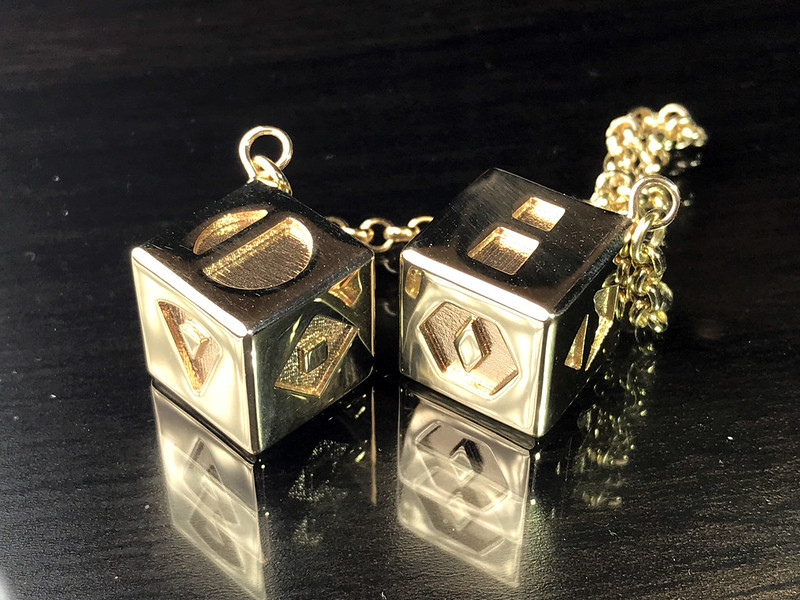 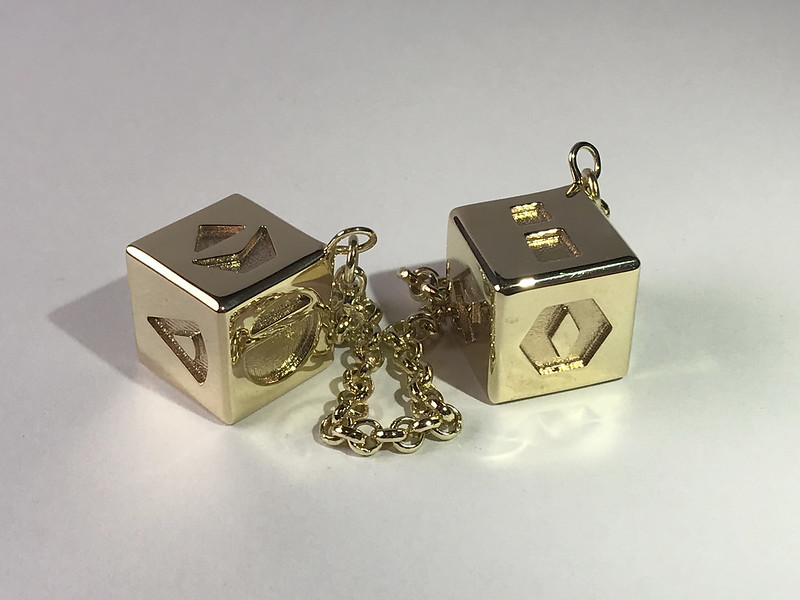 These look great! Could you possibly share the files for the ones with the loops would love to get some!

RPF PREMIUM MEMBER
Jacks1411: Sorry, I will not share the files for the high quality version. I have already seen some people 3D printing low-quality, spray-painted copies and selling them.
Last edited by a moderator: Nov 8, 2018

You did such a great job with them, i hope i’ll be able to print them sometimes!
Btw. here’s a video from the star wars show and they talk about the dice at 5:20. There are some good shots of them
https://m.youtube.com/watch?t=725s&v=p09c0MXDxto

RPF PREMIUM MEMBER
@Torron, thanks for the link. They really did get some good shots in there. I need to make some tweaks to things which I was assuming was just a camera angle distorting the icons. (Time for Rev 3)

You’re welcome. I immediately thought of this thread when i saw the dice there 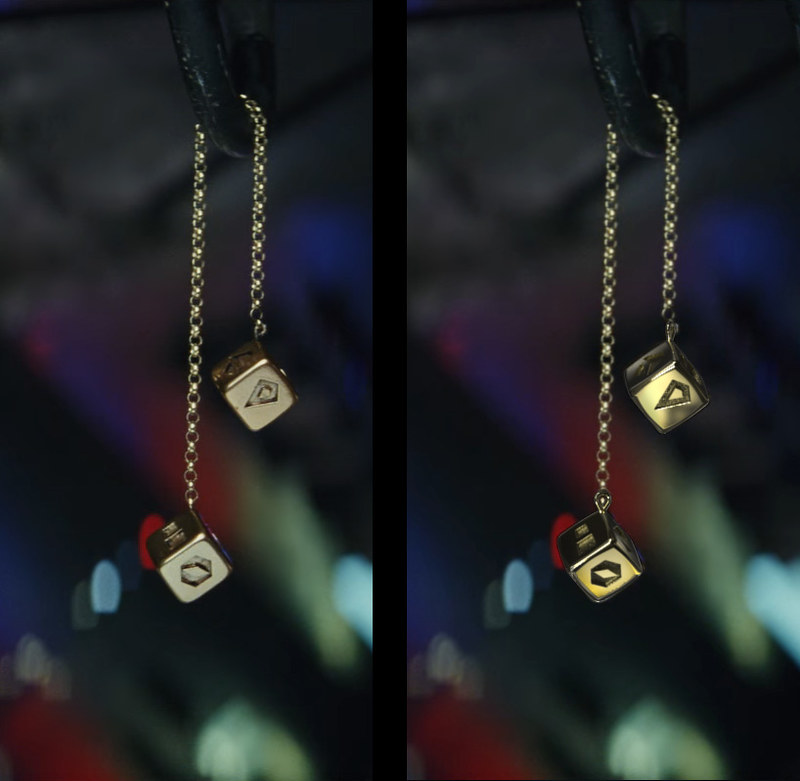 Okay, I have updated the design with the tweaks from the higher-res images.
The render above is a side by side comparison of the in-movie to my replica. The files have been updated on Shapeways, but it will take me some time to redo all the various material renderings. You can look at the Shapways rendering in 3D however if you want to see the updates. Click on the image above for the sales link.

RPF PREMIUM MEMBER
Here are some updated renderings of the newest design. 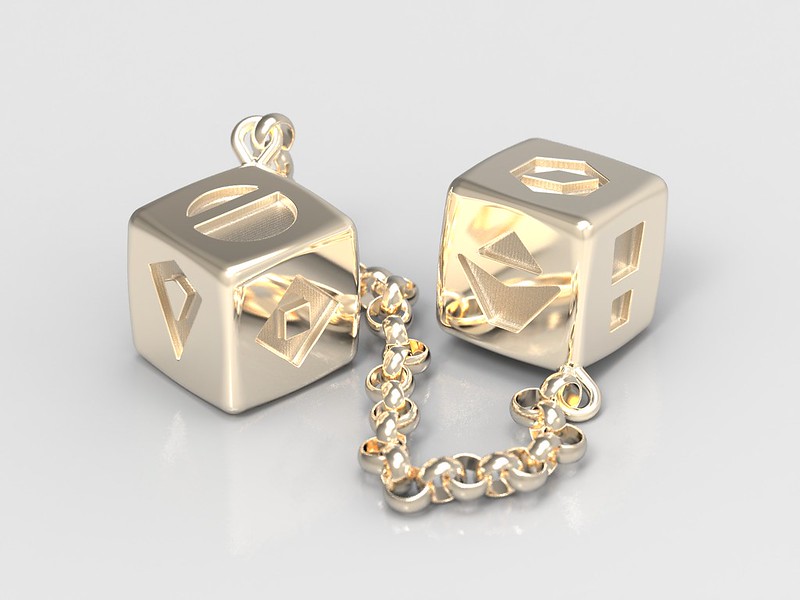 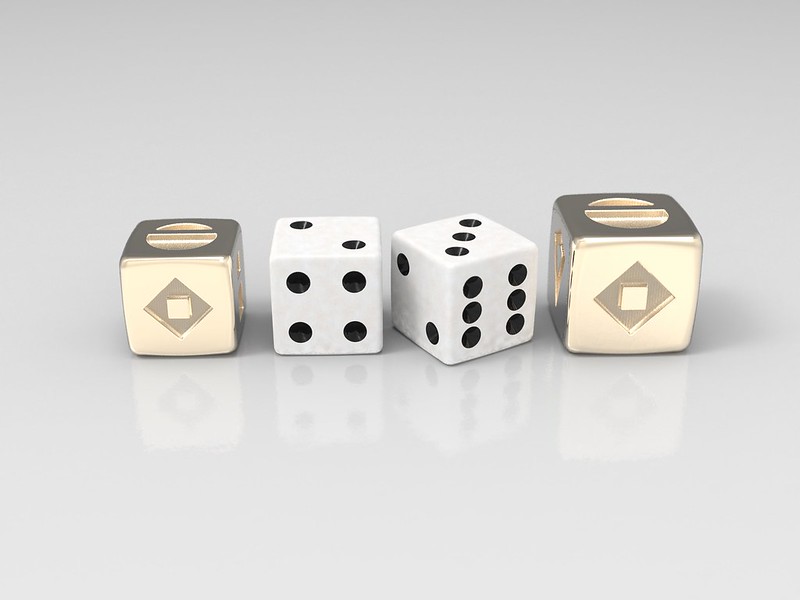 This image shows the 16mm (standard dice) compared to the 19mm (Casio dice)
After holding the prototype in my hand, I am very happy with the 16mm size. Also the 19mm size gets quite a bit more expensive due to the much larger amount of material required to cast it. 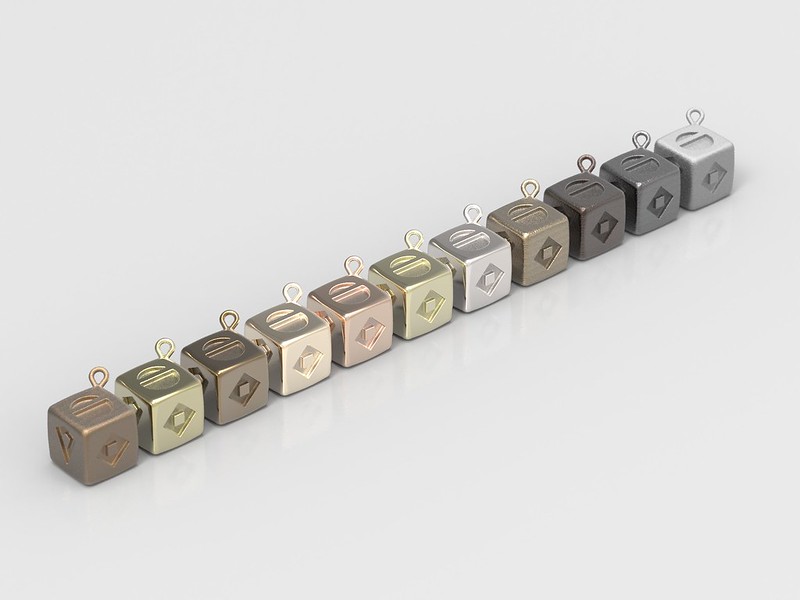 It takes a lot of time to re-generate all the different renderings on each design change. The dice com in two sizes, eleven finishes, and three variants.

RPF PREMIUM MEMBER
Today I received the 19mm size in Polished Metallic Plastic. Note these are the Rev 2 design. So they are less accurate to the movie than the current Rev 3 design.

But they show the look of the material, as well as the size in my hand. After holding both, I feel that the actual movie dice may be not be a standard die size. They may be somewhere between 16 and 19mm. 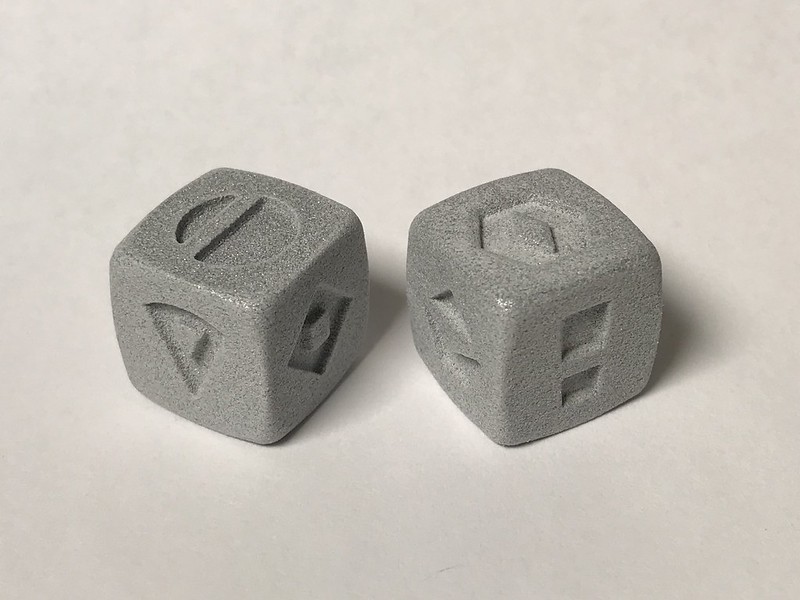 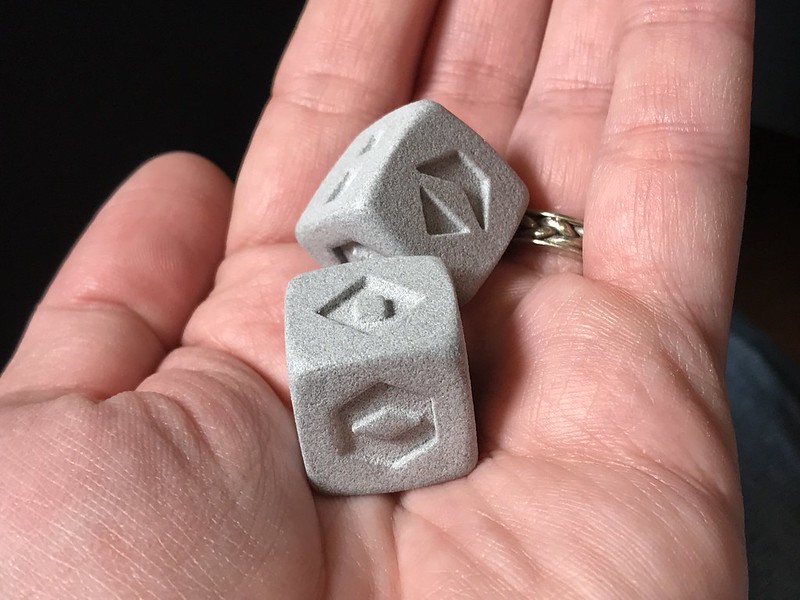 Dice in movie
U

Looks really good, working on my own currently! How did you go about figuring the depth of the designs? I've done all my own designs using reference images from that youtube video, only thing I can't seem to get is the depth currently at 2mm. Going to cast them in brass using a lost wax method.

RPF PREMIUM MEMBER
I just did the depth based on what I felt matched the movie. I did renderings with multiple depths. I decided on 1.5mm but 2mm probably would look fine also.

The Shapeways brass and gold parts are done in wax then cast traditionally, and finally hand polished. (And plated if needed) So your own build should come out great.

The steel and plastic materials are cheaper, but have a tougher surface. They are directly laser sintered metal.

This is really a great project for anyone wanting to make their first prop. Heck you could make them by cutting a dremeling a block of brass by hand.
U

zapwizard said:
I just did the depth based on what I felt matched the movie. I did renderings with multiple depths. I decided on 1.5mm but 2mm probably would look fine also.

The Shapeways brass and gold parts are done in wax then cast traditionally, and finally hand polished. (And plated if needed) So your own build should come out great.

The steel and plastic materials are cheaper, but have a tougher surface. They are directly laser sintered metal.

This is really a great project for anyone wanting to make their first prop. Heck you could make them by cutting a dremeling a block of brass by hand.
Click to expand...

This is my first attempt ever at a replica prop so thank you for the advice!

I think I will go with 2mm depth to hopefully get a bit more detail when casting. Thought about using the Dremel but I don't know how steady my hands are.

Hey, there's yet another video from the Star Wars Show where they show the dice stored in the Lucasfilm archives.

I noticed two differences between your prop and the original:
I think they show one of the sides in a clearer view, I believe it's the “five” symbol. You have it with a cut-in triangle in the main base, but on these screenshots, it seems flat.
The second is the “one” symbol. It appears that it isn't narrowing as you have it but rather straight.

Take a look for yourself