I'm going to preface this with the fact that I kind of just jumped into making a bio without doing enough research...so the first part of this post is about the "Beta" Thor bio. Basically I just wanted a bio with Mjolnir as the brow or crest of the bio.

The whole story that popped up in my mind was that a Predator accidentally crosses path's with Thor either in Asgard or somewhere else and a fight ensues. The Predator gives Thor a run for his money and vice versa and a mutual respect develops. Thus Thor creates a bio for The Predator in honor of his strength. Or perhaps the Predator creates a bio in honor of Thor. Anyway, it would be epic. I drew a couple of rough sketches then decided to do a budget build with cardboard and Bondo. Here is the ensuing result.


First I made the basic shape out of cardboard and duct tape then covered the whole schpeel with Bondo. 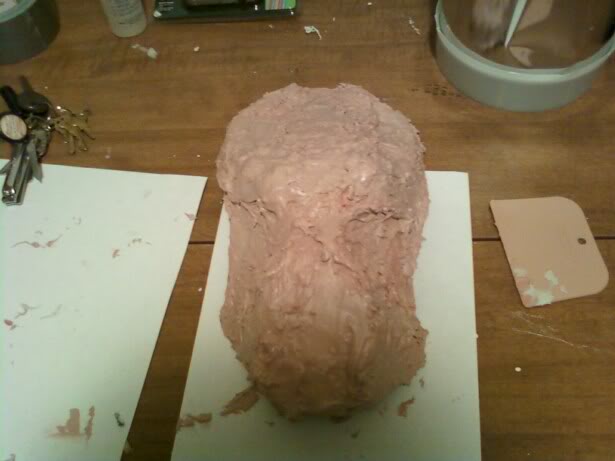 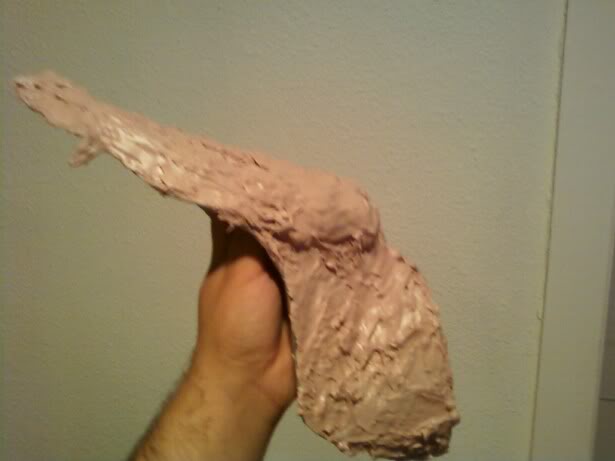 So it's pretty rough and I ladled it on there pretty thick to give me plenty of room to work.

Here's after the initial sanding and some patch work: 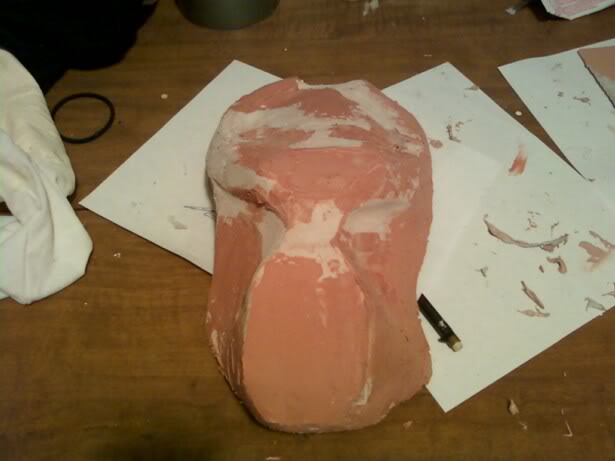 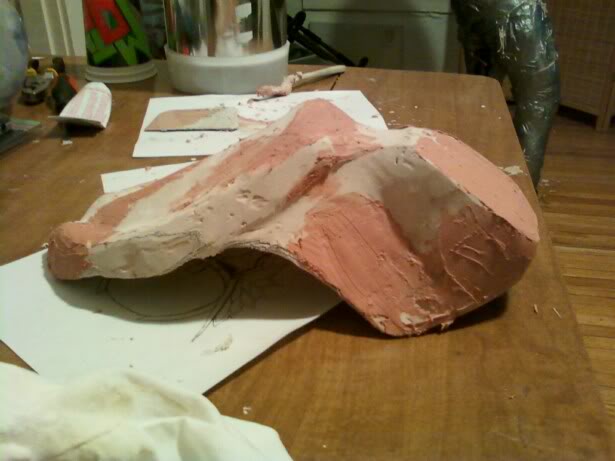 Then I added details with the trusty ole Dremel: 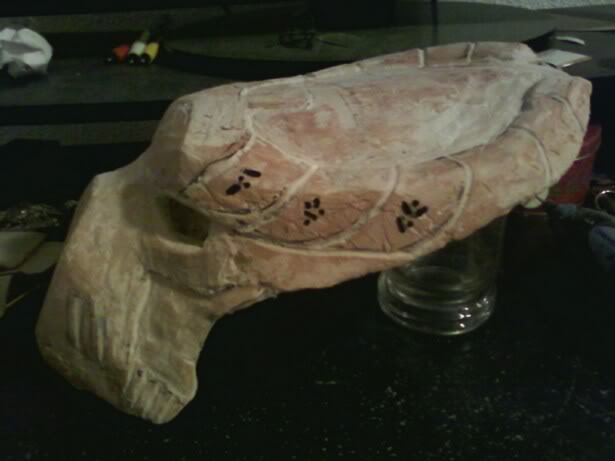 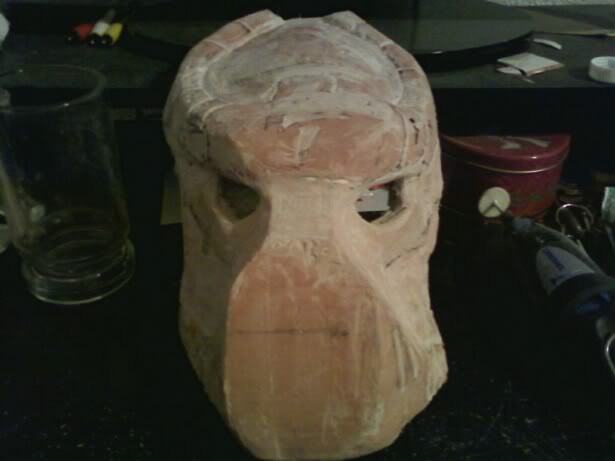 Then I primed, painted, and weathered the beast: 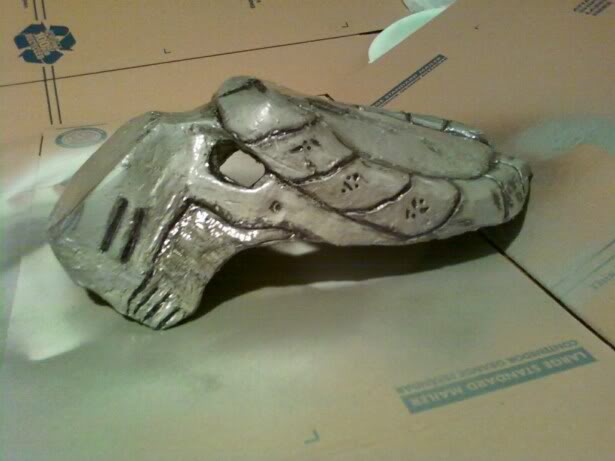 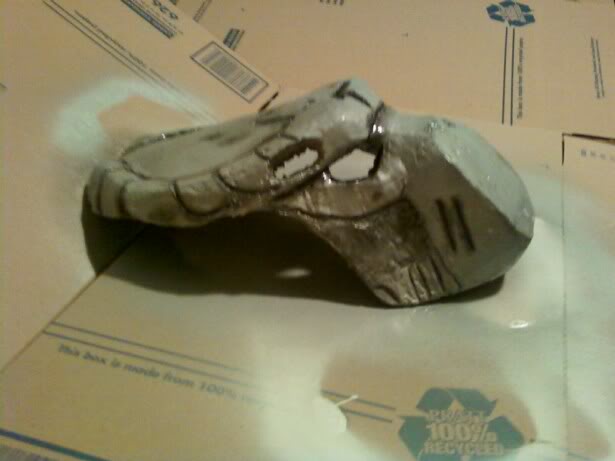 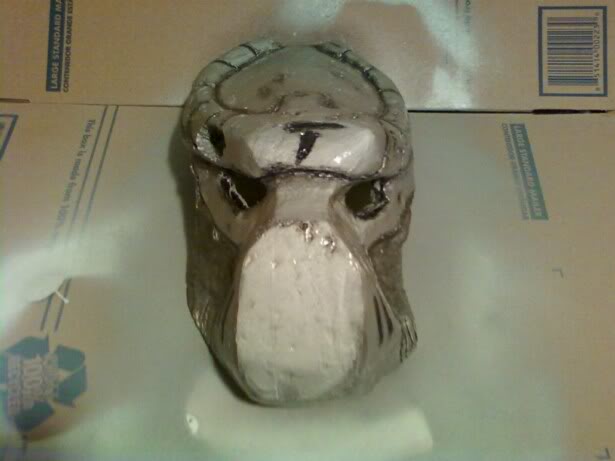 So I didn't like my first weather attempts and tried again: 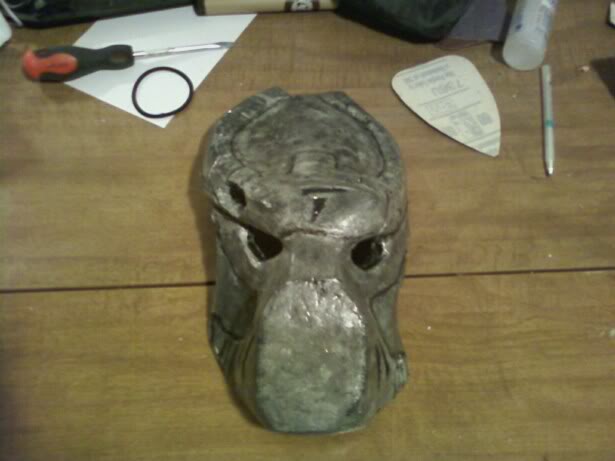 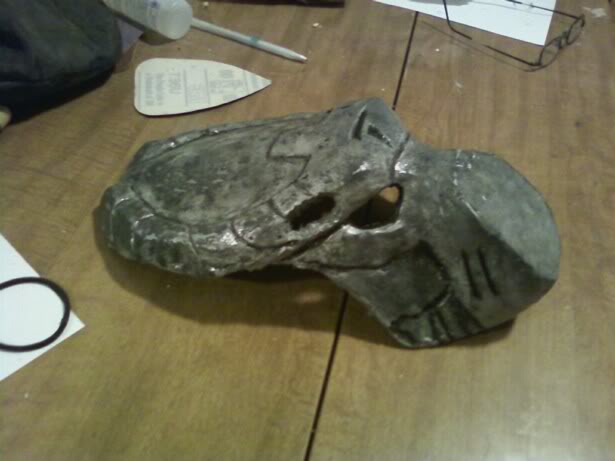 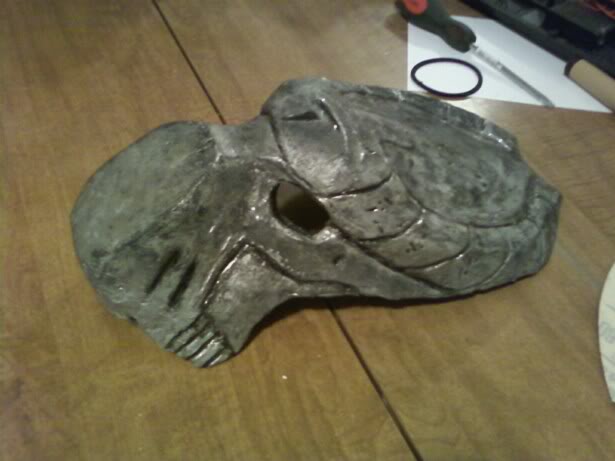 Then...after all this hard work I decide I don't like the bio at all. It's too small, the dome's not at all right and it's not very symmetrical. So I order some clay from Monster Makers and draw up another sketch based on the bio that I have and I get this. 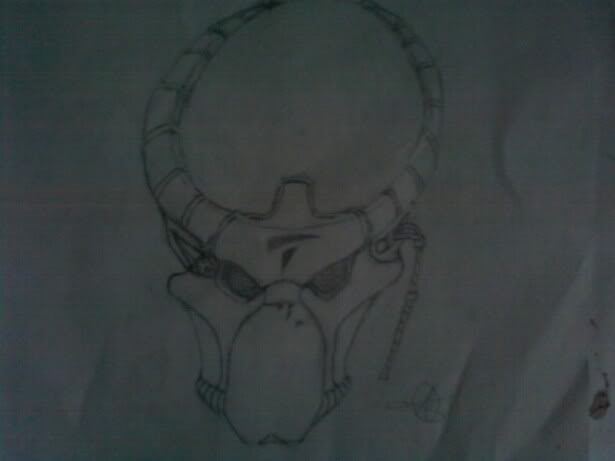 Needless to say I have started sculpting my new and improved bio with actual measurements on an armature. That journey will be outlined in subsequent posts...probably tomorrow. I figure that's enough for now.

So I (as promised) am adding to my journey with the beginnings of my actual clay bio sculpt. I intend make a cast in silicone then make a resin mask after finished. First I made an armature and covered it in clay to get started: 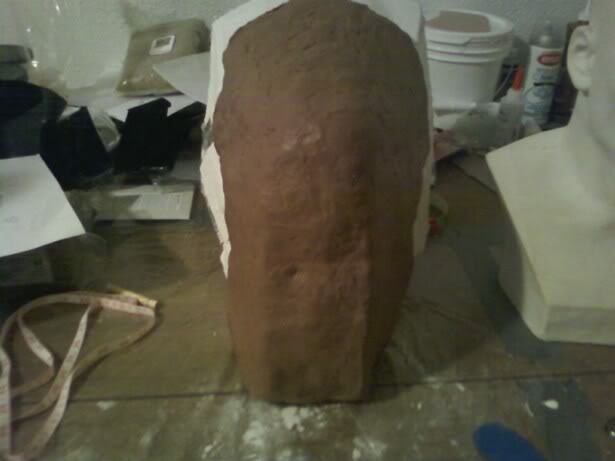 Then I just started to get the rough shapes down. 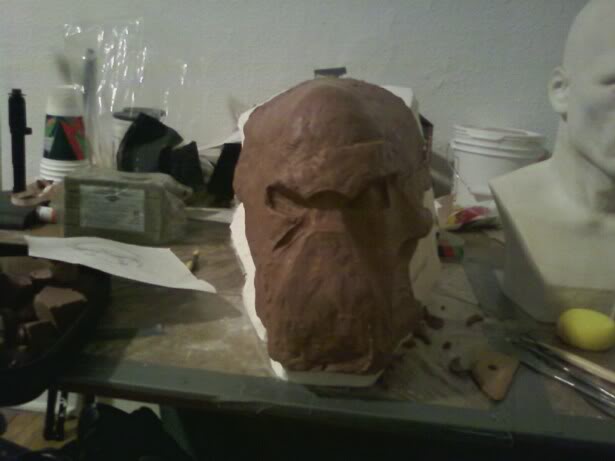 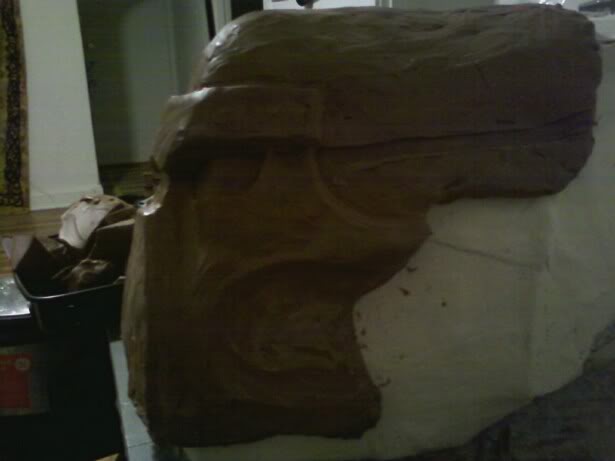 As you may be able to tell the dome and slope are all wrong...mainly because I was too hasty with my armature construction.

Here's a pic after I added more of a dome and slope...sadly I over did it and he came out looking like a conehead. 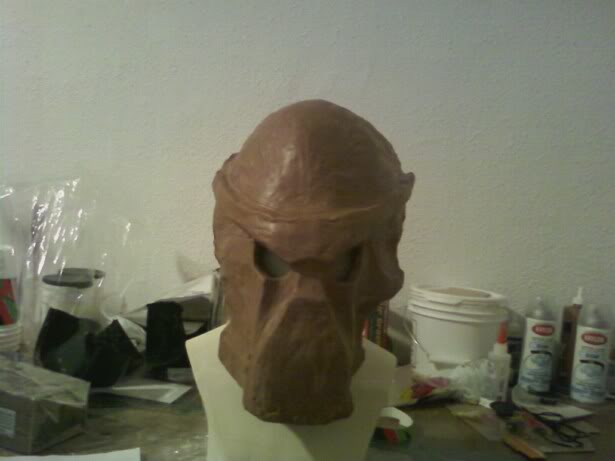 Also during the process I added alot of clay and my armature broke...once again due to shoddy construction on my part...but the quest must continue.

Here I've reduced the dome quite a bit, worked on overall symmetry as well as removing some excess on the bottom of the mask...He was looking a little long in the face. 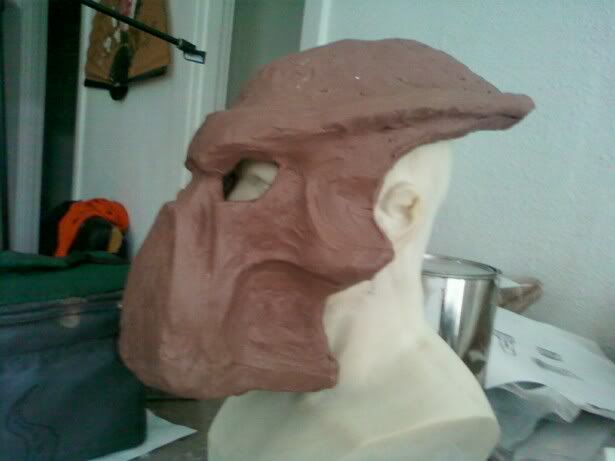 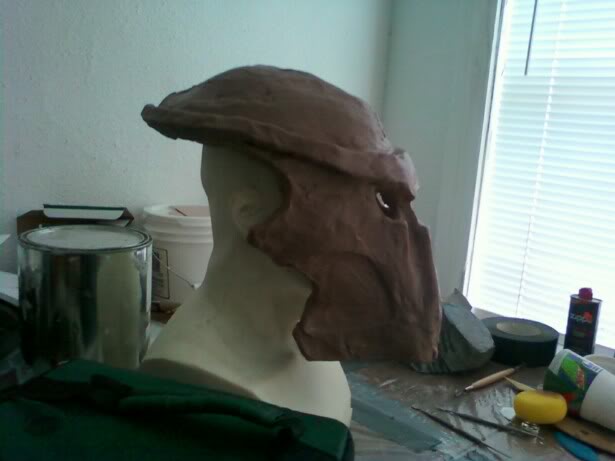 And here I've added some detail, smoothed, and begun work on the shroud. 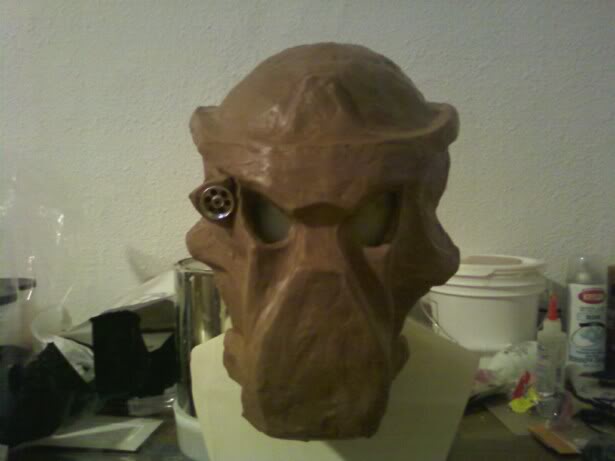 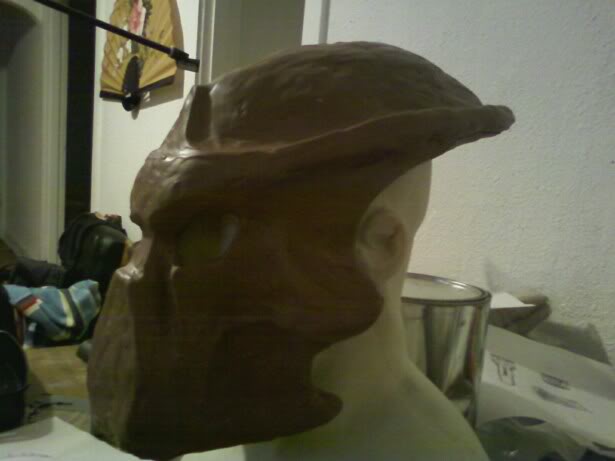 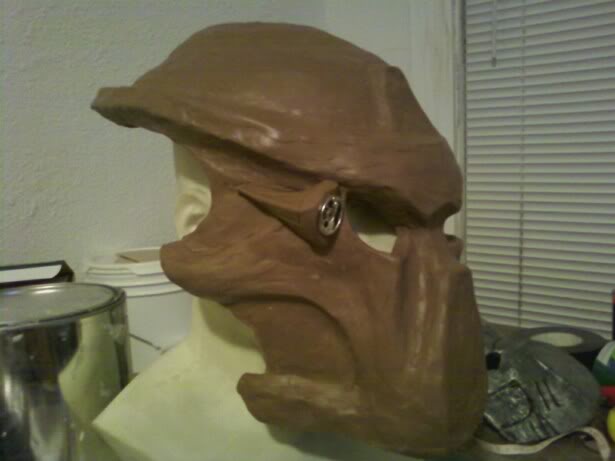 He's getting there but the slope is still a bit off so I'll be working on that as well as adding more details and doing a final smooth over. Getting very close to the casting process. More pics soon.

i like your drawing. that bio has a really nice style to it.

about your sculpt. i think that you need to fix your scale a bit. either the face is too big or the crown/dome is too small.
it's probably a bit of both actually.

but first i would try to make your crown/dome a little bit longer and wider.

preds have a tiny face in comparison to the top of their crowns.

keep up the good work. for this being your second try, you have made a lot of progress.
Cheers

Great concept, I would agree though about looking at the scale. I would make the whole thing considerably bigger, particularly the dome. If you search the site you'll find dimensions for other Bio's which will give you a better idea of just how huge they really are. Would also add that on all Bio's, the back of the dome doesn't come down like a normal helmet, they tend to level out to allow for the slope of the Pred's massive noggin.

Only my two cents worth though, keep up the good work and don't rush yourslef to get finished. Time spent getting it the best you can is well worth it when you get the end result made up.

So here's the set of pictures I was too lazy to put up last night. It has some smoothing and work on the dome and some detailing work as well as squaring off the eyes a bit better. Who thunk a dome could be so frustrating to get correct. I also put clay as a backer to the eye holes and laser holes so that I can actually cast it without having to deal with the gaping holes. 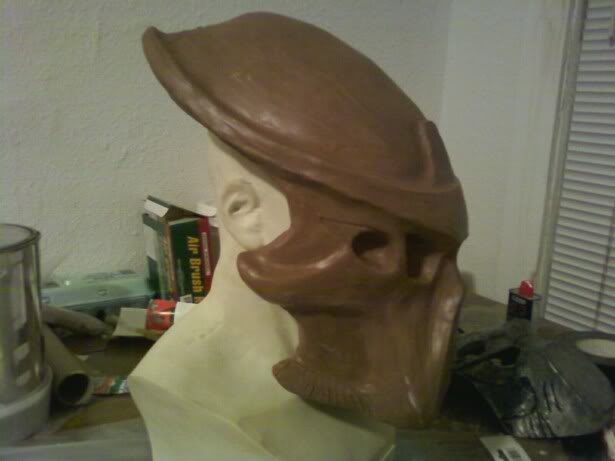 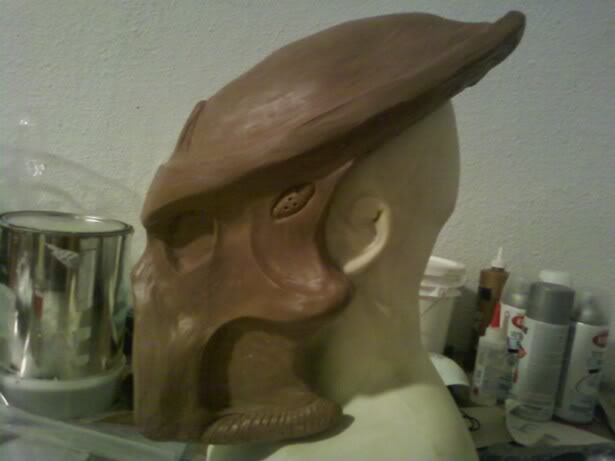 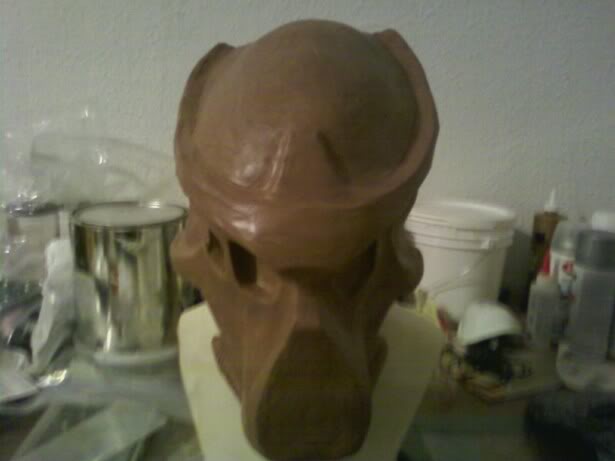 Since I had this already done before I added the post last night I wasn't able to take your suggestions into account until tonight. So tonight I dropped the brow thus simultaneously making him more menacing looking and making the face a bit smaller. I also lengthened the dome. Still not exactly right but I think I'm getting there. 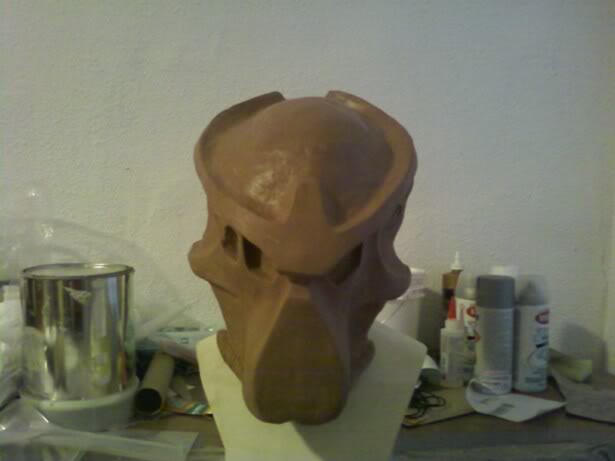 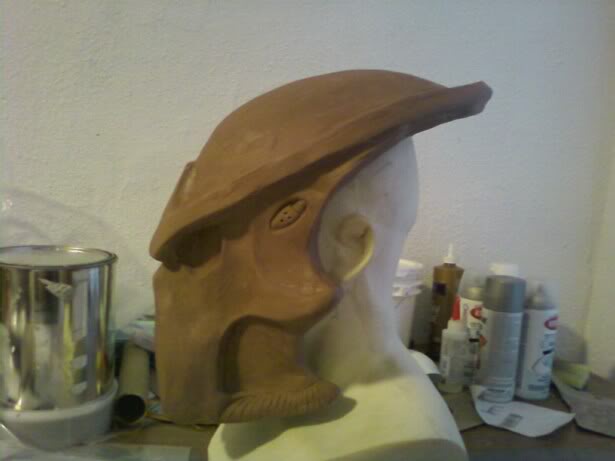 I also made the fins or the crown...or the...you know the little wrap-around-thingies extend back a bit more along with the lengthening of the dome. I've been going off some measurements I pulled of of "The Lair" and so far the length from chin to back of the dome is 21" and the width at the widest part of the dome is roughly 11". The width isn't quite where I want it but it's pretty close. I'll do more tomorrow.

I also tore apart my shroud...I didn't like it as it was and it wasn't fitting right with all the expanding and changing I've been doing so I'll remake it tomorrow and actual dremel it out so I can fit the laser diode's I scrounged into it. Thank you all for all your support and suggestions...this place rocks my socks off.

Perhaps for the clan symbol you can use thor's hammer