Here's my next project for January 2021! 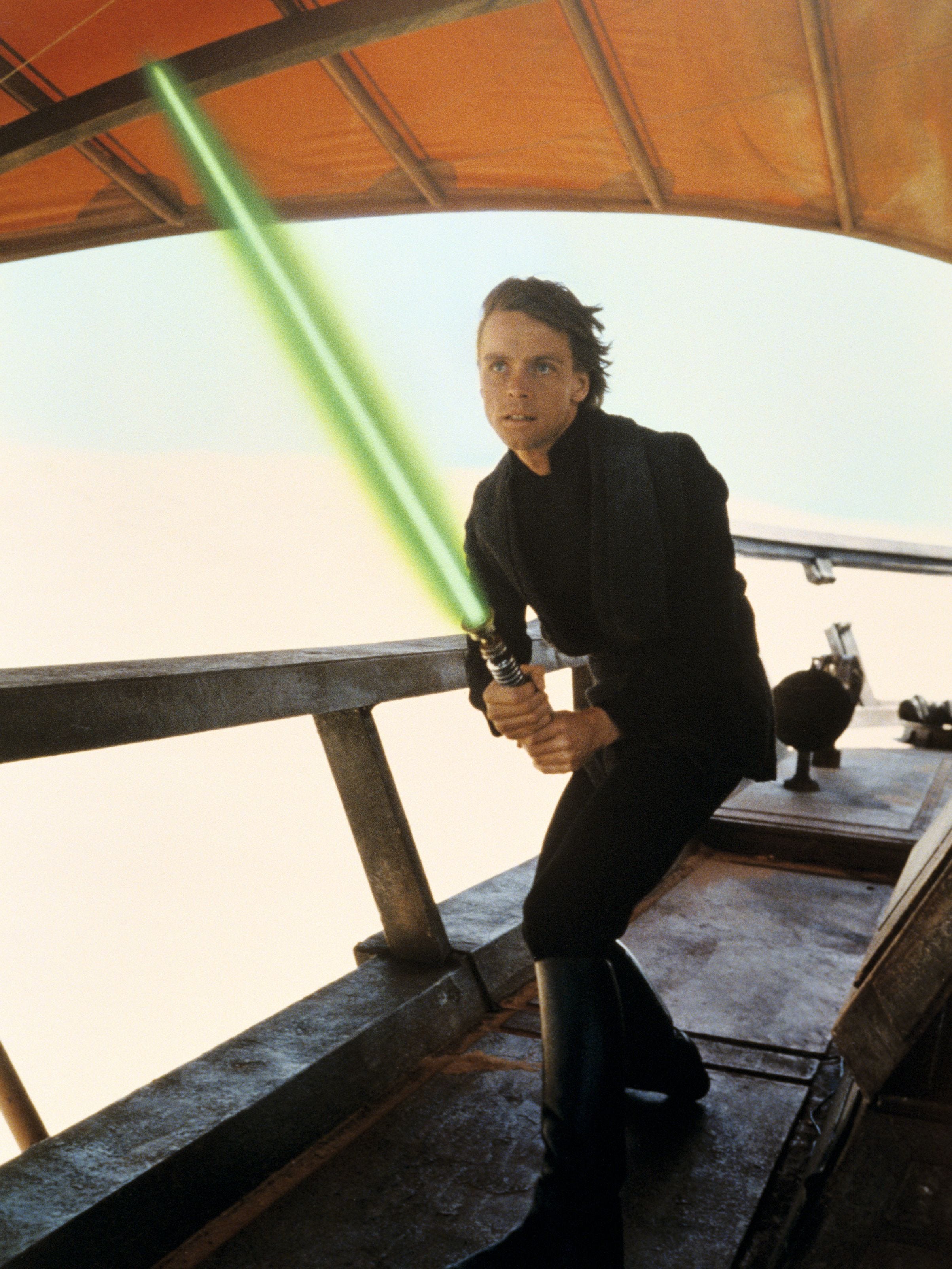 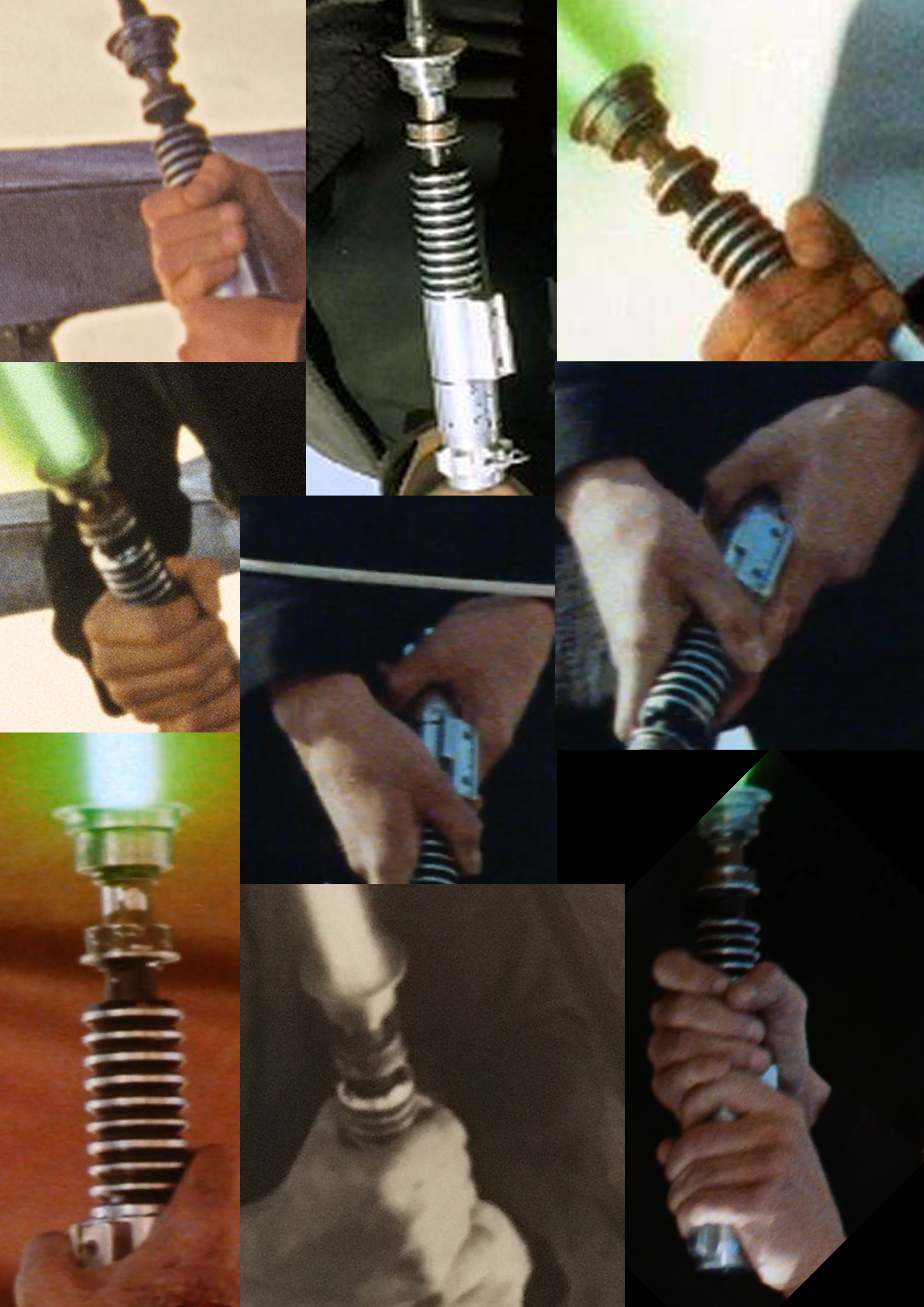 I originally intended on stepping away from the Hero (and Yuma) to focus on other projects, and to make way for the MoM static Hero, which I believe is just around the corner. I felt that the two projects would be too similar to be running along side each other. For that reason, as some of you already know (and requested), I moved on to researching and developing the V2 behind the scenes, with the intention of doing a run in the new year. That project is VERY close to going ahead (and still will be *eventually). I've become aware however that there is another V2 already in development and very close to production. That's perfectly fine, of course (and I wish everyone involved the best of luck), but it has made me reconsider my approach to choosing projects...

There is ALWAYS going to be someone working on the same project as you. It's unavoidable in this game. NOT going ahead with something just because someone is working on a similar project, or because a fantastic version already exists, is nonsense. At the end of the day, I do this because I have a passion for the subject matter, and for the creative process.

So, going forward, I'll be working on the things that interest me. You've just got to do what you want to do at the end of the day, and if people want to come along for the journey, that's great! My area of interest, as you probably know, is the props of the original trilogy. My approach, is to recreate these props as they were. Inside and out. I'm immensely proud of the work I did on the Yuma/ISYHCANL/Hero, and whilst I do intend on moving on to other things at some point in 2021, there is one area that I have continued to develop beyond the work I did for the run...

When it came to building my own personal Yuma from the 1st run. I always intended on installing a stunt blade. As with the hilt itself, it was important to me that the blade was thoroughly researched in order to reproduce it as accurately as possible.

There have been countless discussions surrounding which materials were used for the OT stunt blades (various over the years). The Yuma is a special case however. The blade never came in to contact with anything, and was used as a reference for the special effects department only. I set about researching it's dimensions for a start and found that it was NOT tapered. I also determined its length/diameter using both 2D and 3D photogrammetry: 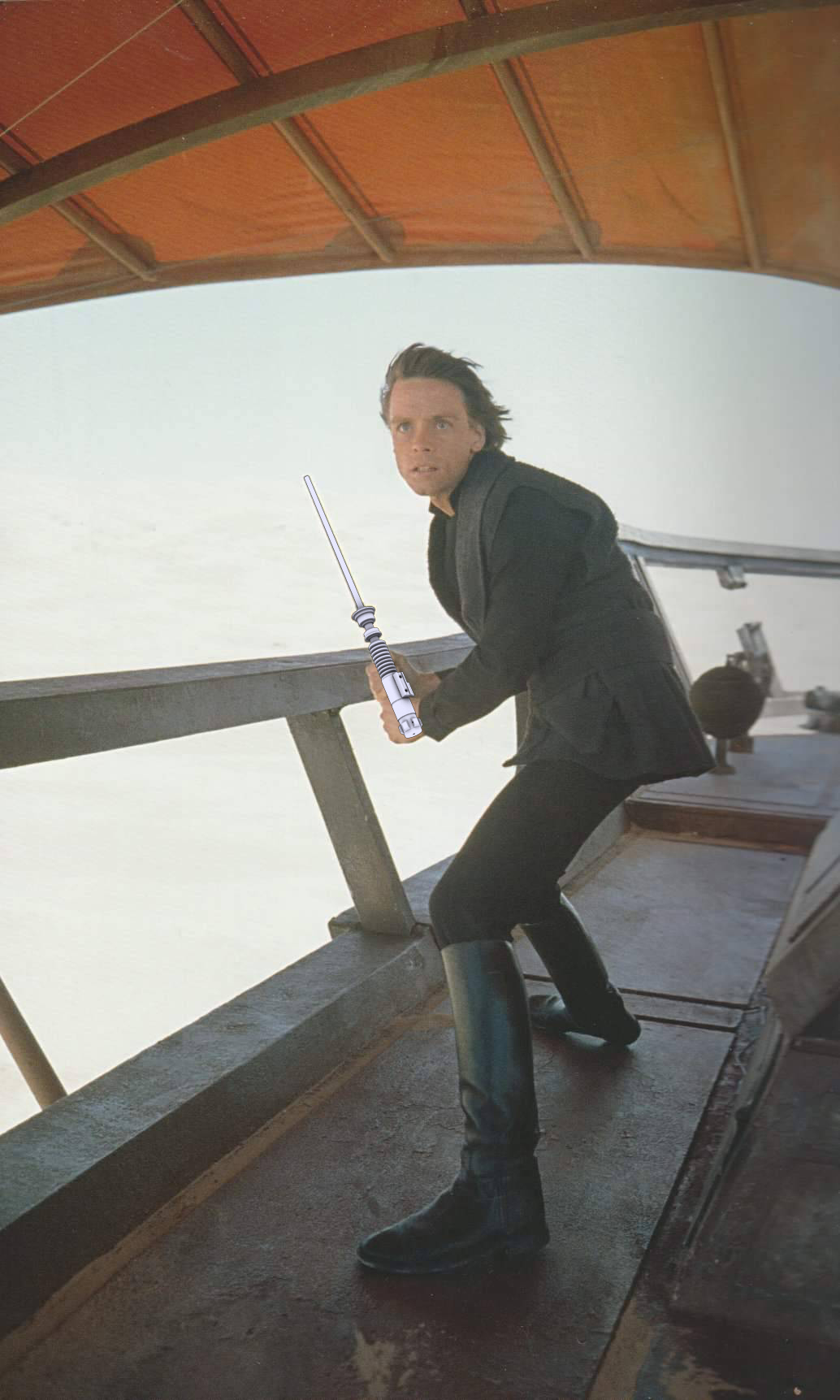 I found the blade to be 1/2' (12.7mm) in diameter, which brought me to the conclusion that it was likely standard stock. Either wooden dowel or fiberglass. It's hard to say for sure, but I opted for Fiberglass, as I believe it to be the more durable choice when it comes to installing the tang/collar.

It's also already black, which it needed to be in order to stand out against the bright outdoor backdrop.

Another area that I have developed is the paint work. Following the first run, I developed a layout of the weathering, which I printed out on to self adhesive paper and cut out by hand. This was incredibly time consuming, but ultimately worth it: 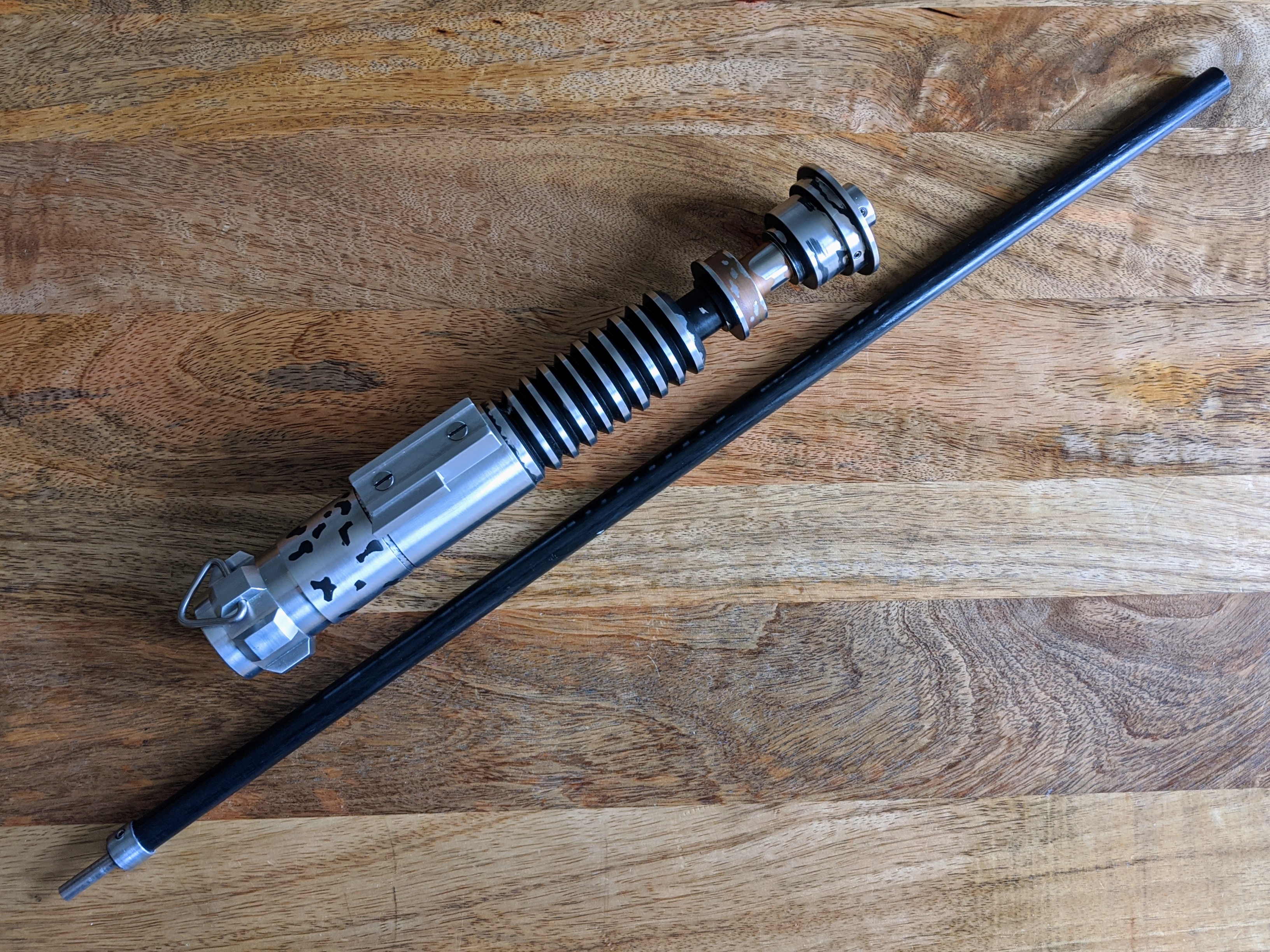 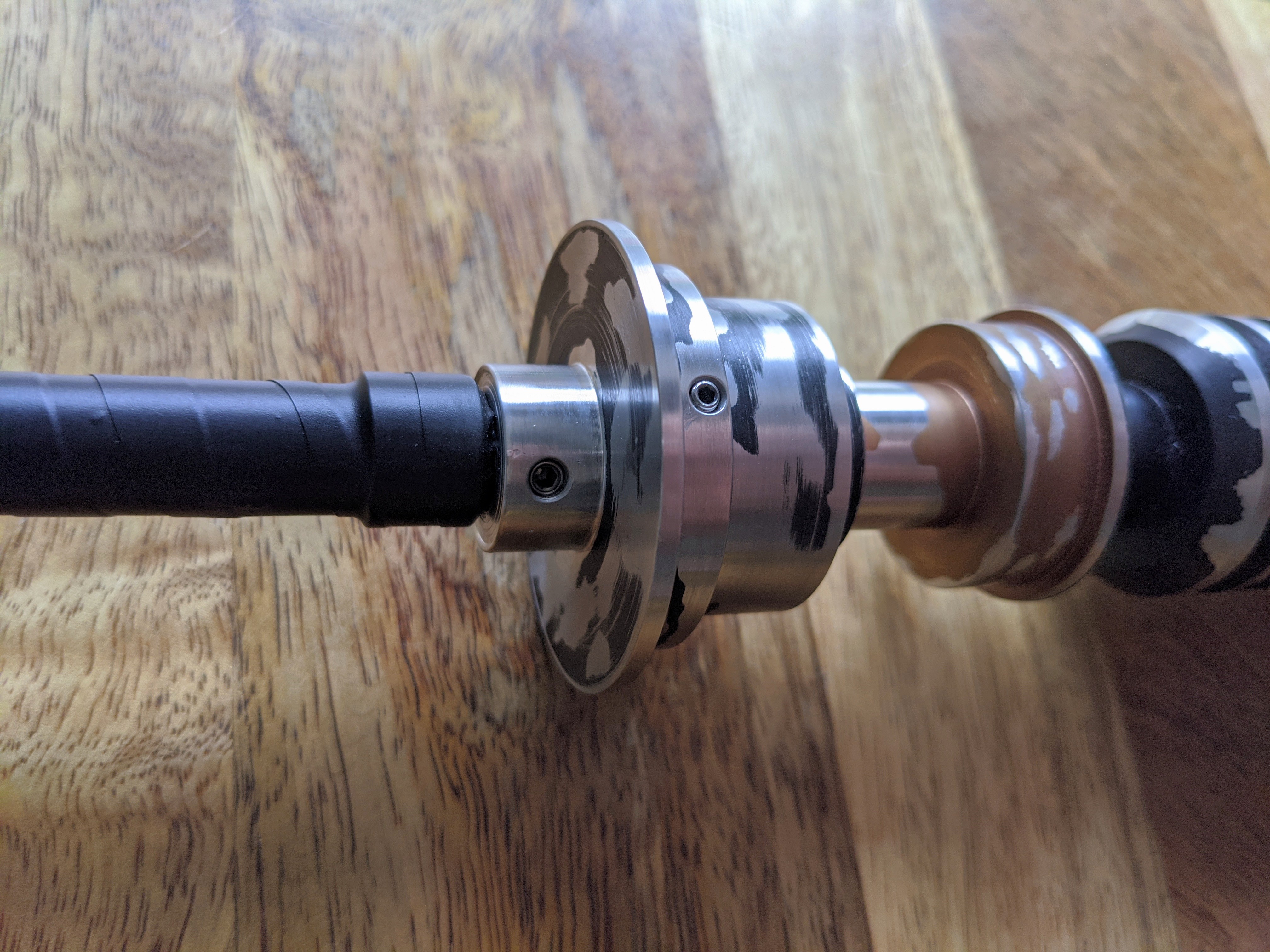 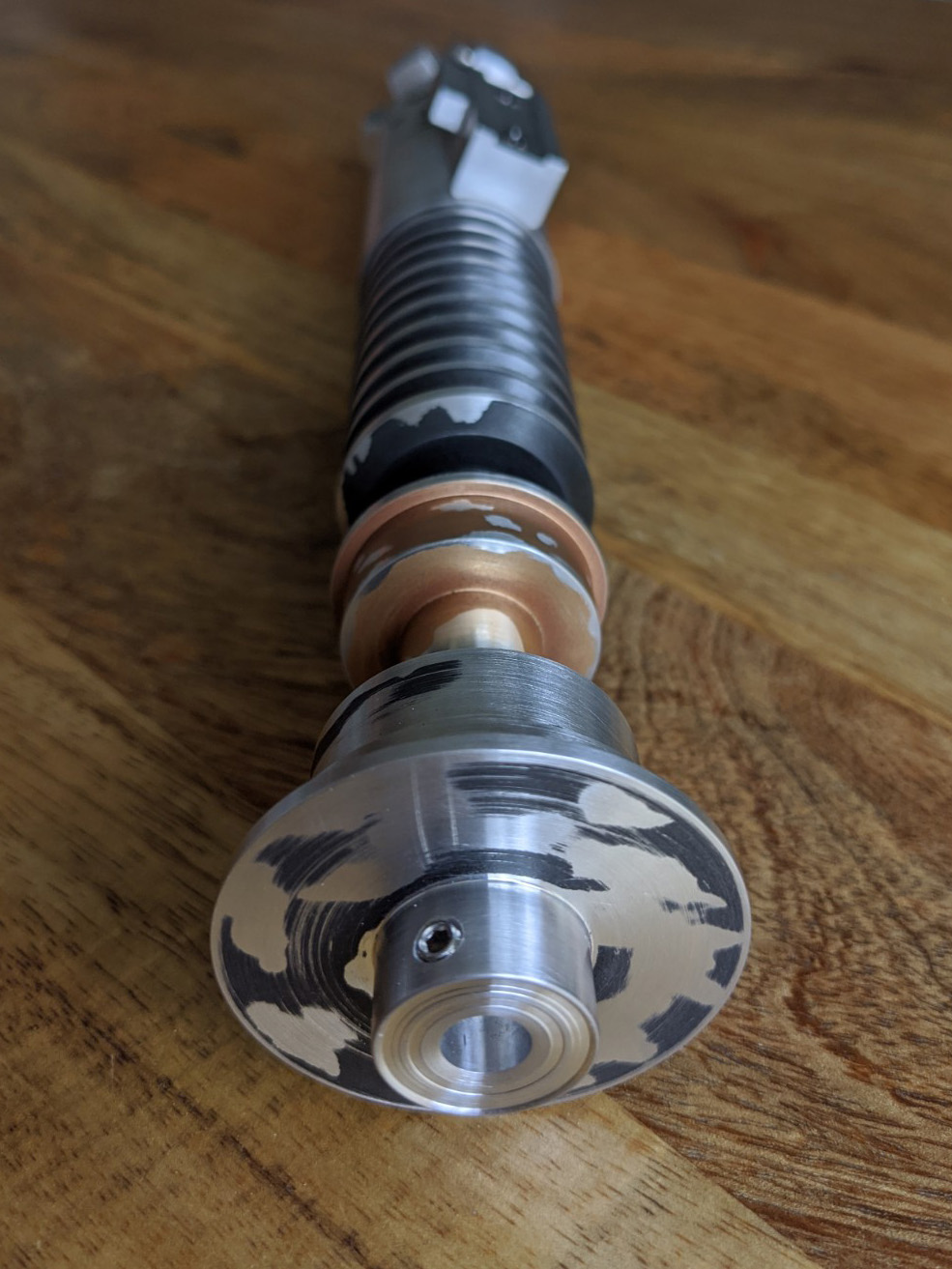 I always intended, for my next Yuma build, to have my weathering layout professionally printed/cut as a vinyl stencil. Mainly to make my own life easier, but also to offer to those who have already purchased Yumas from me on previous runs, to aid them in their builds. Well, now that it's ready, I figured why not do another Yuma specific run? 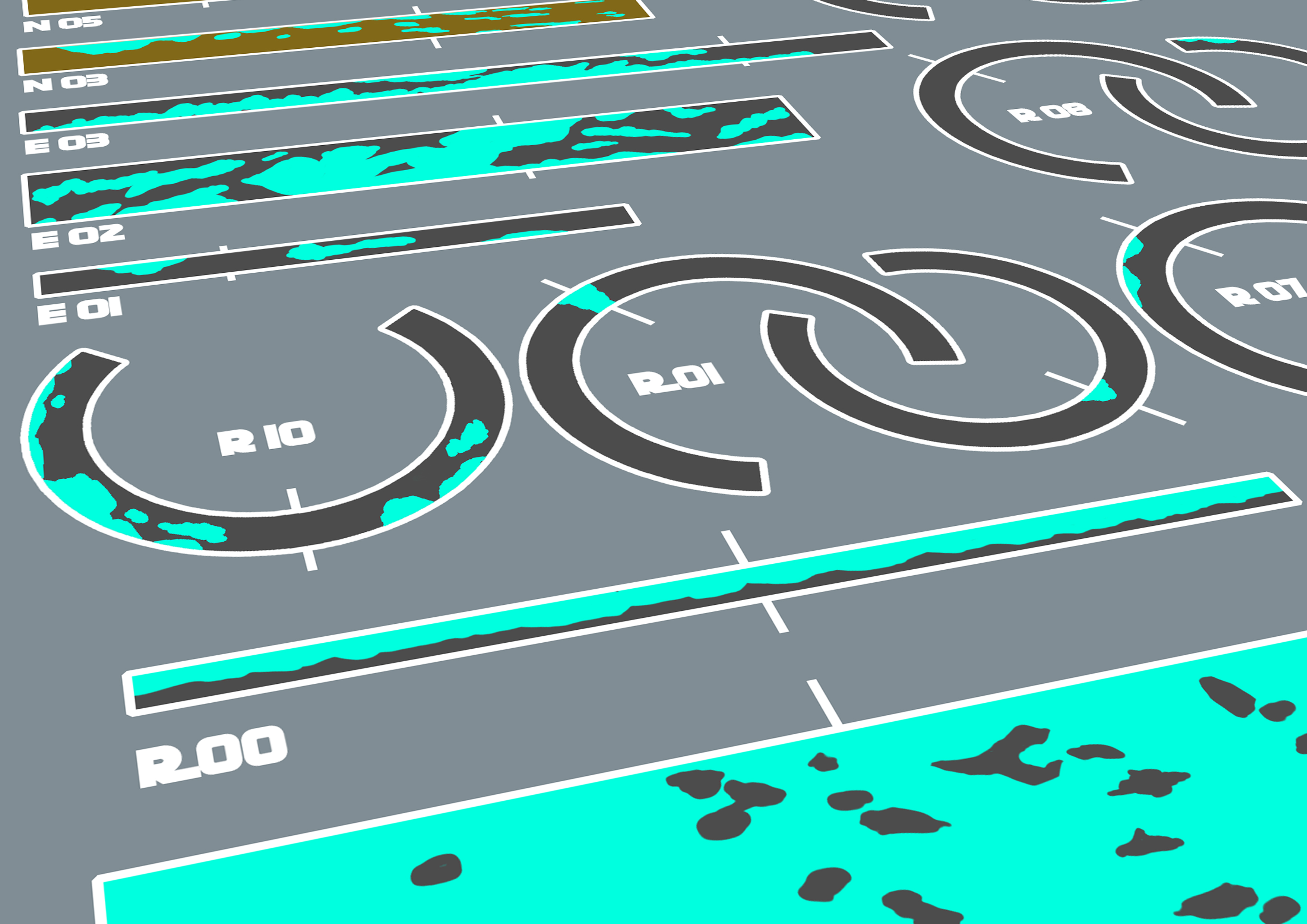 Since posting the interest thread, I've had an opportunity to test the new stencils on two commissions from my last run (using the exact files/parts that will be ordered for this run): 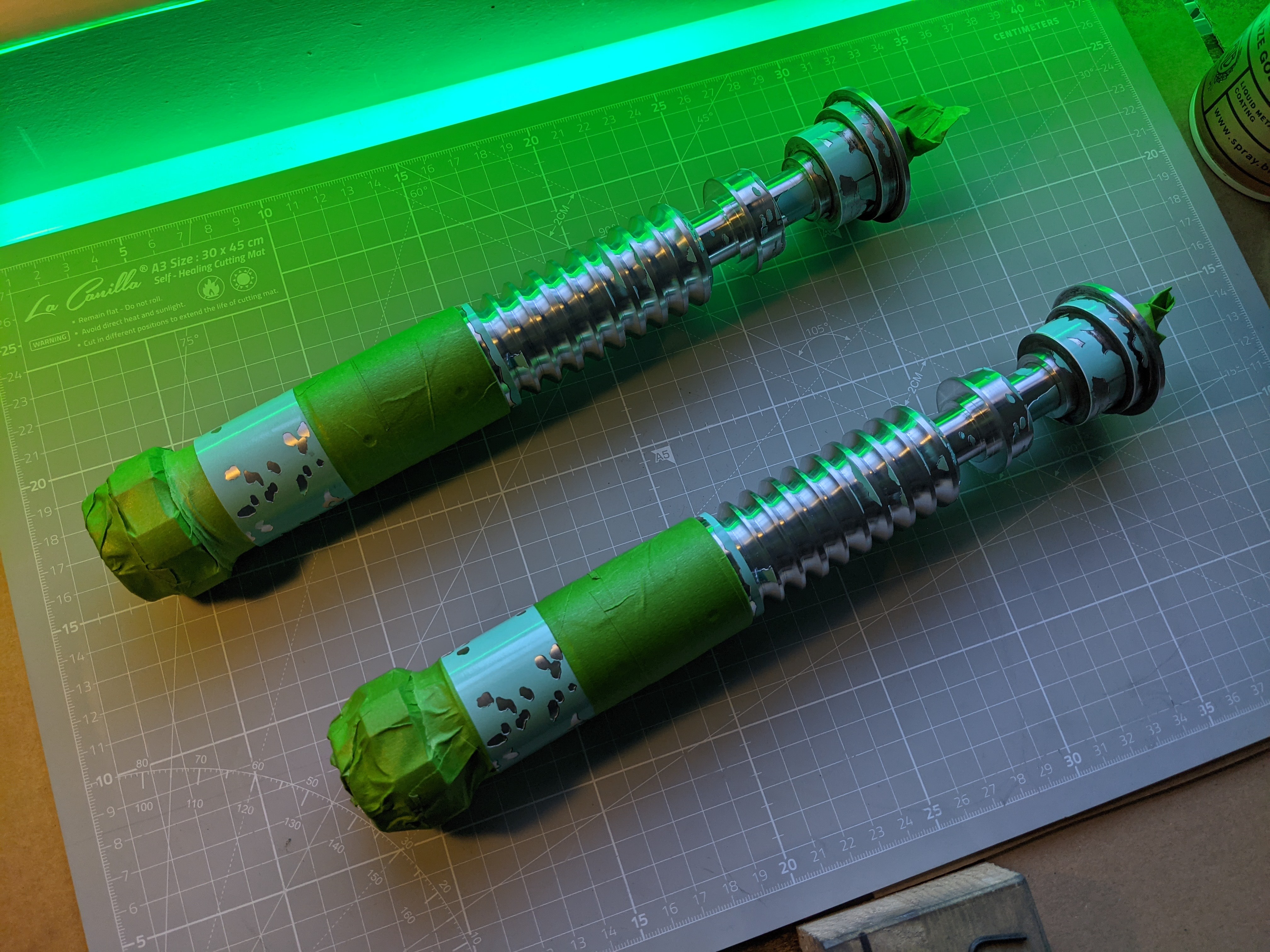 I was really happy with the results! 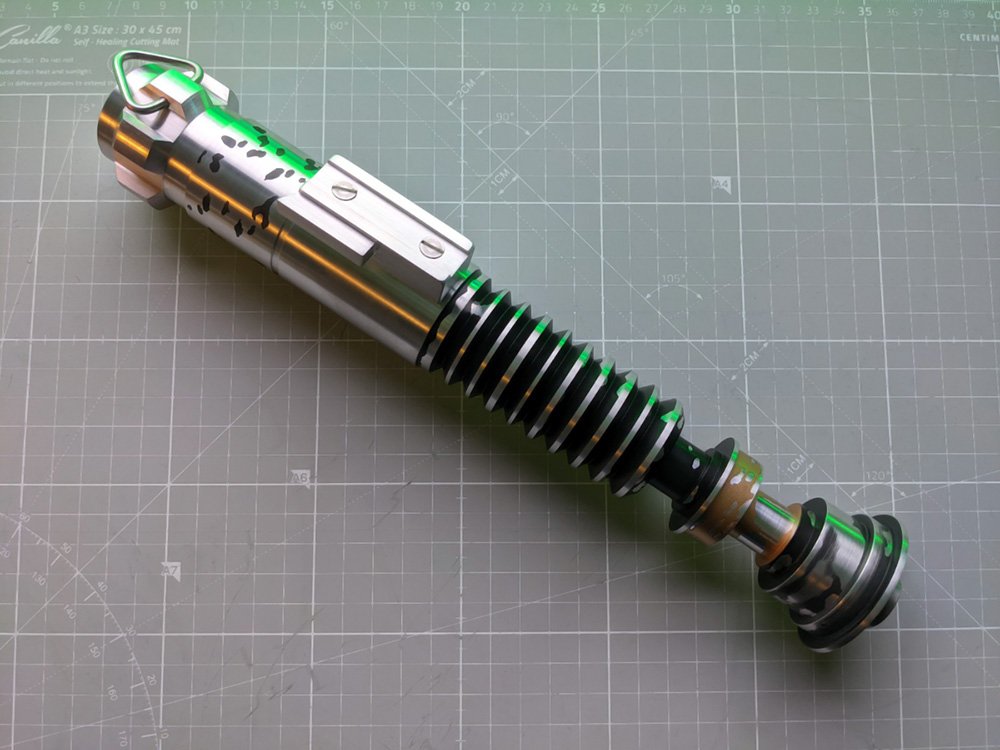 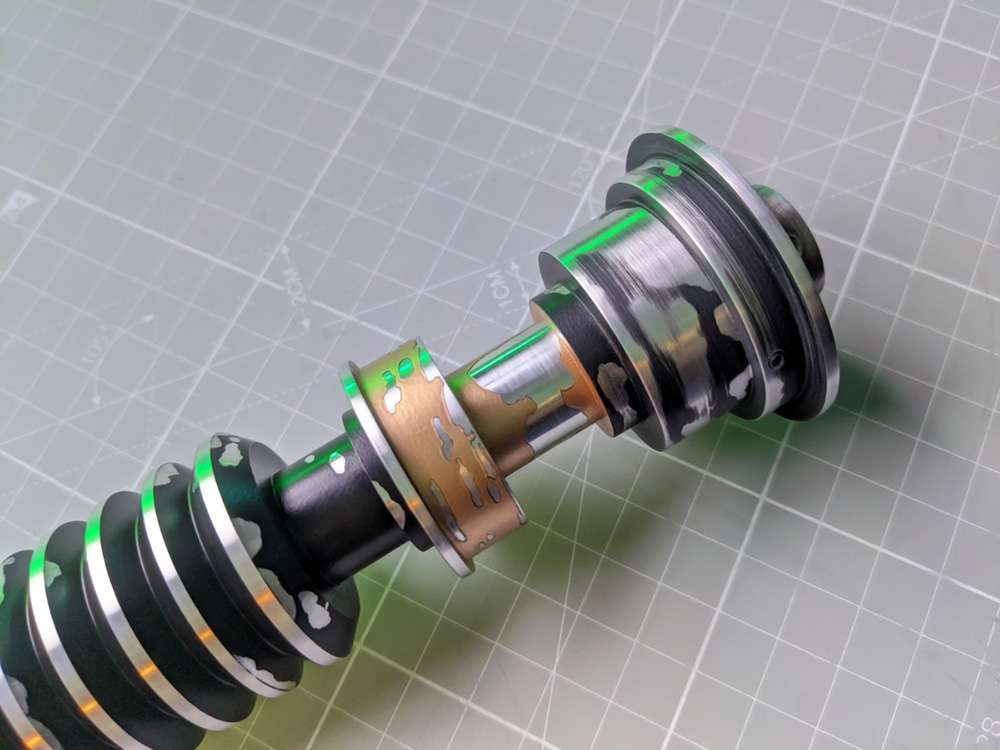 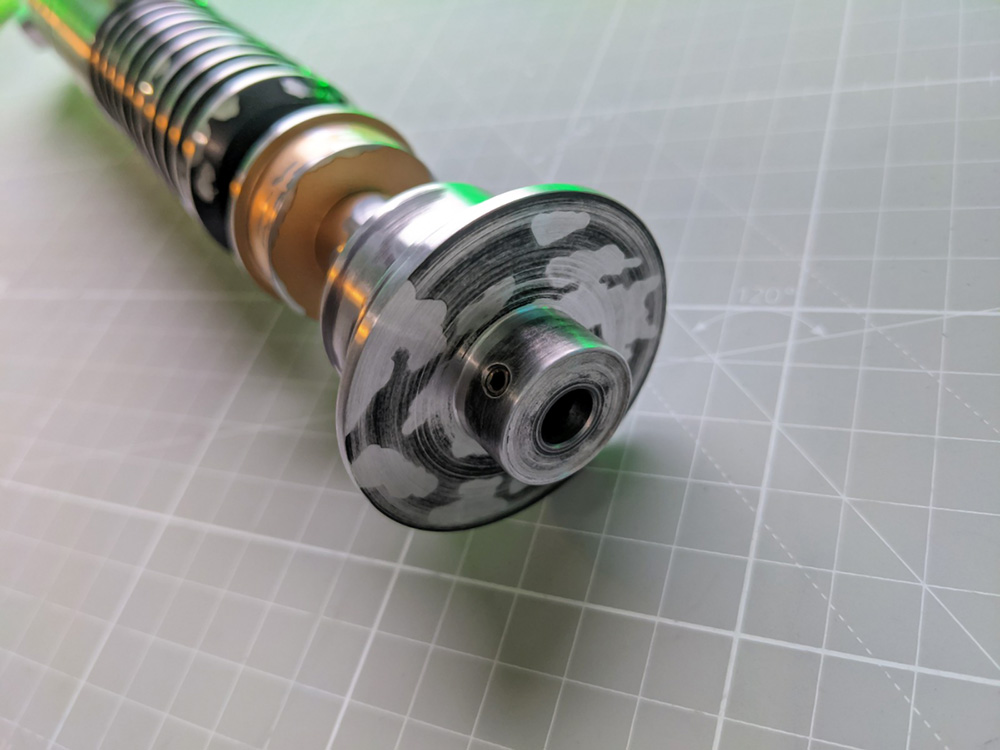 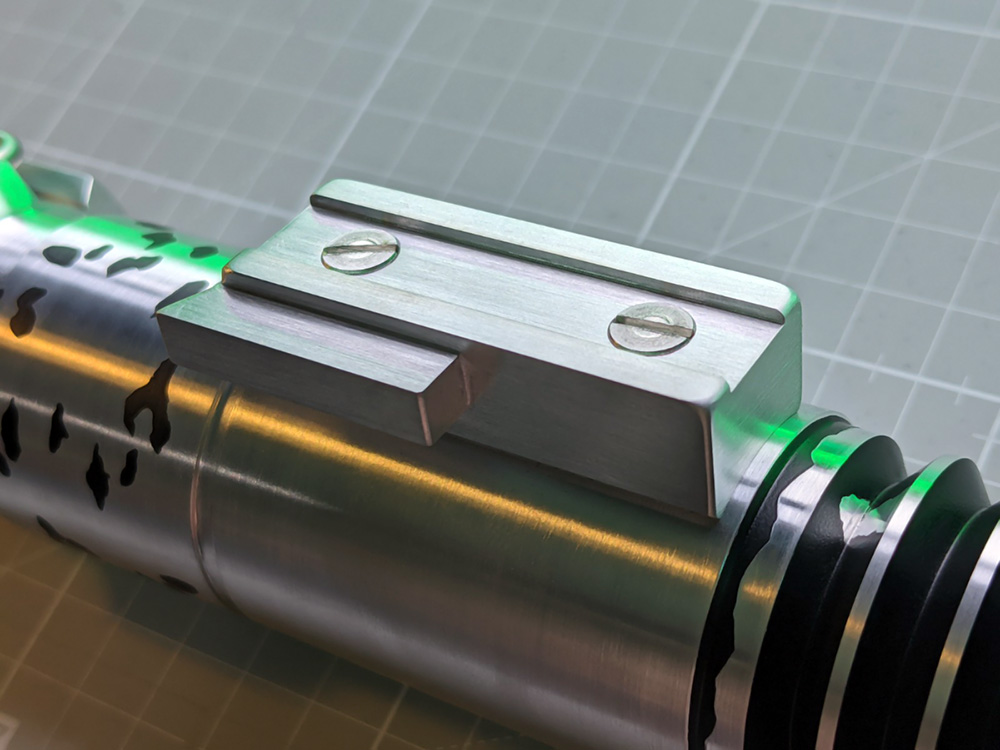 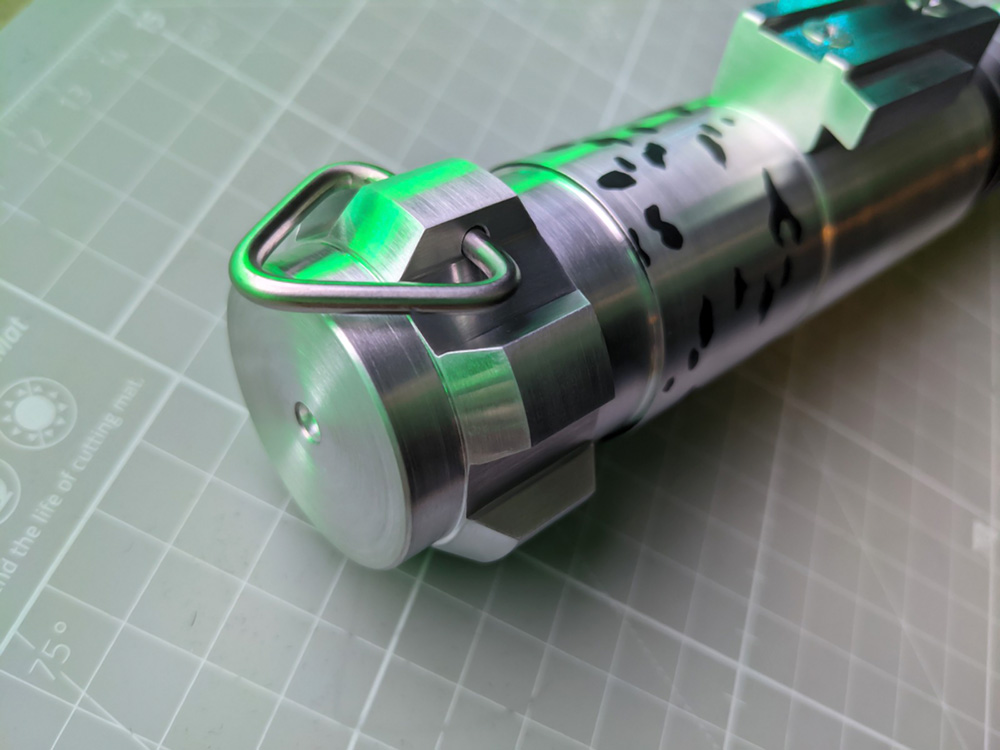 For those of you unfamiliar with my previous project, and the work that went in to developing the hilt itself, you can find the related threads here:

The models themselves were painstakingly referenced using both 2D and 3D photogrammetry to match the original Hero prop (which started life as the Yuma) in every detail!

The kit will include:
I will be offering blank Yuma bodies, along with Yuma control boxes which will be compatible with all of my previous runs. I'll also be offering blades and stencils separately for those who need them.

I can also offer the kit as a complete build if needed: 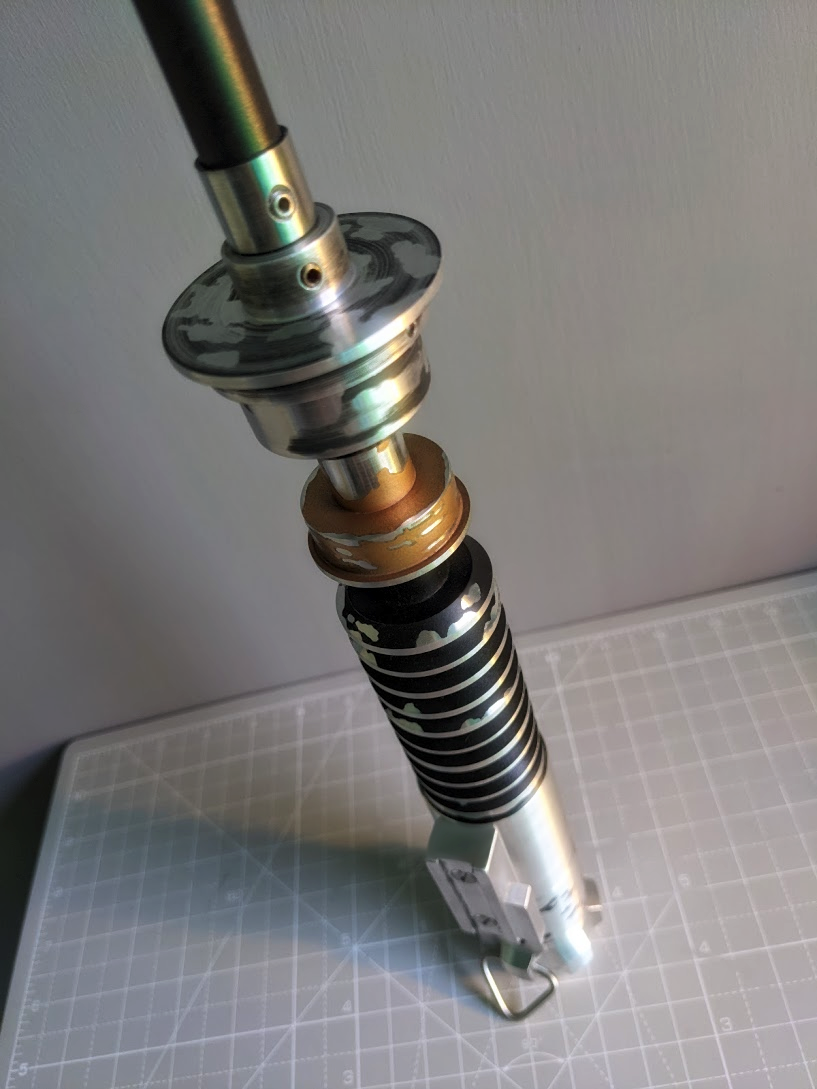 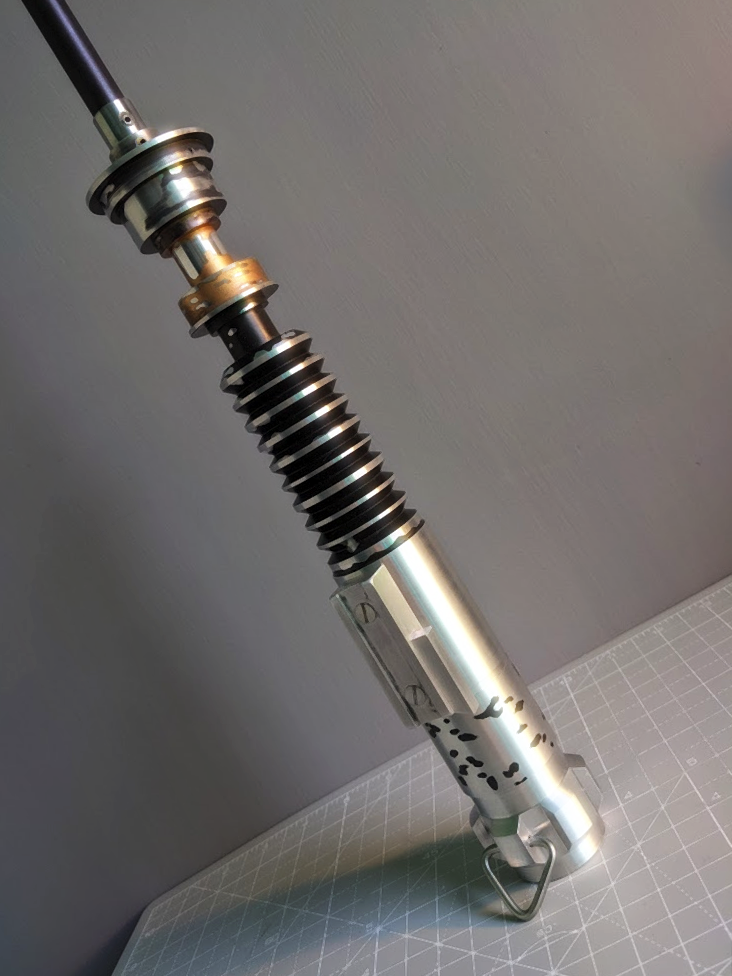 The price of the kit/parts will vary depending on your location as they have been calculated to include PP fees (as per the classifieds guidelines):

*Upfront payment is required in order to pay for manufacturing of the parts, but for those ordering a Completed Yuma Build, I can give you the option of paying the commission on completion of the work to help spread the cost. This is optional of course, so whichever suits you best.*

Thanks for taking the time to read the thread. Any questions, feel free to drop me a message.

All the best and, as always, MTFBWY!


* A quick note for those of you waiting on my V2/Shared stunt project... It IS still going ahead at some point in the new year. The models are pretty much completed. There is a lot of research and general musings that need to be written up, along with diagrams and artwork/overlays that need to be created. For those who are interested, it will be a prop replica. It will therefore NOT be installable as an FX hilt. It will however take a motor and stunt blade, as the V2 did in it's original configuration. I'll be posting more about this in the new year.

RPF PREMIUM MEMBER
Im in for a completed build

Presume complete means painted and finished and will turn up ready to slap a blade in and hit people with?

BobaDan said:
Im in for a completed build

Presume complete means painted and finished and will turn up ready to slap a blade in and hit people with?
Click to expand...

I take no responsibility for what people choose to do with these after they've received them!

RPF PREMIUM MEMBER
Then it shall be mine!

Count me in for a finished one anyway, UK of course.

DannyP91 said:
Im in for a complete kit please and thank you dave
Click to expand...

DannyP91 said:
Im in for a complete kit please and thank you dave
Click to expand...

Full kit i mean to save any confusion.
B

Put me down for a stencil set

DannyP91 said:
Full kit i mean to save any confusion.
Click to expand...

BansheeMan005 said:
Put me down for a stencil set
Click to expand...

Dave this is great! please put me down for a stencil kit!

I'm in for the full yuma kit im uk based

I take it thats the build it yourself option? Because I love putting them together

Han Solo fan said:
Dave this is great! please put me down for a stencil kit!
Click to expand...

NagorbArt said:
I'm in for the full yuma kit im uk based

I take it thats the build it yourself option? Because I love putting them together
Click to expand...

Hi. Yes, that's correct. The Kit has all the parts to build yourself (including the blade and the stencils). Thank you! List updated

RPF PREMIUM MEMBER
Oh Dave. Just when I thought it was safe to come back into Project Runs you do this to me. You know how I feel about your runs !
Just pondering the combo to ask for

nailuj said:
Oh Dave. Just when I thought it was safe to come back into Project Runs you do this to me. You know how I feel about your runs !
Just pondering the combo to ask for
Click to expand...

Oops. Sorry about that, Julian. I can do a full kit, minus the Yuma box if you already have one. Or whatever you need obviously. Thanks (again!)

RPF PREMIUM MEMBER
I’m in for a blade and a stencil kit!

I'm in for stencils only. please

Saturday at 3:43 AM
Ryan Clinton