The Wand Company to reissue their Star Trek communicator?

PicasoX said:
how do you get to these secret bits?
Click to expand...

"Hold down the left button while pushing the right button UP, keeping holding, you get through Spock and then Pike has a line. "

I don't think I'll bother with the newer version, sounds like DS or AA voice clips. You'd think they would have added different chirps and perhaps generally made it worth the extra money it costs compared to the original since it is supposed to be a limited edition/run (the new box doesn't count lol). As it stands it sounds like you're getting something that's not as good as the original but costs more money.

RPF PREMIUM MEMBER
Is it true the newer ones don’t come withe the Starfleet carrying hard case like the first one?

PicasoX said:
Got mine today too, no shipping notification or anything. Kind of fun to get a surprise like that but I would prefer notifications when a $200 package is on the way.

The antenna and the speaker grill are a slightly darker, like a more antique brass looking finish, where as the old ones looked more like bright shiny gold.

The moiré on mine looks like its ticking, like the old stopwatch models, there is almost a slight pause every half second or so, don't know if it's supposed to be that way or not. (Seems to be running a little smoother after a full charge on the battery and letting it run a while)

Also, the lid opening and buttons are all very tight, in a good quality way, not like the manufacturing is less polished or anything like that.

I really think they could have done a much better job with the actors voice files, the old ones do make it seem more like you are captain Kirk and the crew are responding to you on the com, the new phrases are not as good, in my opinion. Some of them don't even seem like real coms chatter, just quotes from the show. Also, there is something a little off with the Ururah clip "Enterprise, Lt Uhura here, its a bad recording, almost like its not her real voice but a voice over with a stand in, definitely not the same quality as the other actor voice clips.

If this was the first Wand Com I had received, I'd say this is the absolute best! version of the communicator replica available for all time, (and I do have just about every good com replica that has ever existed, all the best at least) but since I have 2 of the older Wand Coms, I'd still say they are still better, solely because of the voice clips.

If you follow the production of the Master Replicas Communicator, down to the the Vegas Experience, down to the 1st Art Asylum version with the metal grid, all the way down to the Diamond select with the Plastic antenna version, they were all the same communicator degraded in quality over and over, until it was just crap like a fisher price toy, the oldest version was the best. Every time that chinese factory resold it, it got worse and worse and holy crap they made a killing in that worm hole that was left open by Master Replicas, and they never cleaned up their mess.

Obviously Wand has controls in place to avoid a repeat of that $#it show, or we would already be swimming in it.
Click to expand...

Are they slightly different sizes? or is that just the angle of the camera?
A

They are the same size with just minor cosmetic changes and come with everything the originals did.

AJK001 said:
They are the same size with just minor cosmetic changes and come with everything the originals did.
Click to expand...

Gotcha. Those pics made it look like the new one was slimmer. Just angle I guess. 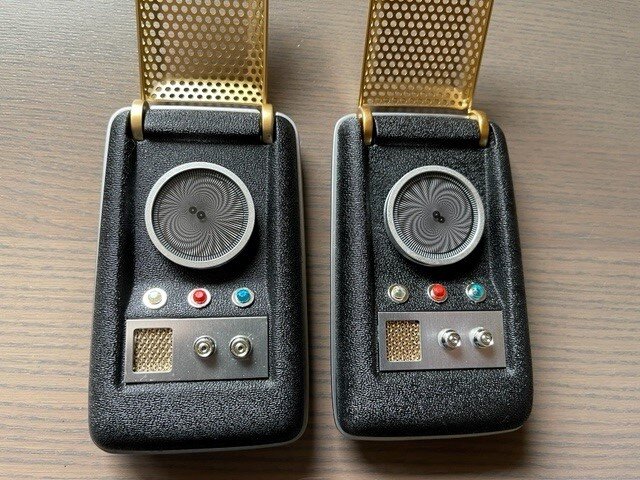 Simonized said:
I don't think I'll bother with the newer version, sounds like DS or AA voice clips. You'd think they would have added different chirps and perhaps generally made it worth the extra money it costs compared to the original since it is supposed to be a limited edition/run (the new box doesn't count lol). As it stands it sounds like you're getting something that's not as good as the original but costs more money.
Click to expand...

Yeah if you have an old one, there is not a big incentive to buy this. If you missed out it makes sense, or a completist collector or gifting. It does support this fantastic company so I really want them to be around for years to come doing as much classic Trek as possible. TNG being classic too now I guess if they ever go there.

Yes they are physically identical, its just the angle. Matter of fact I pulled out another one of my older wand communicators too and the antenna material on that one is a little darker too, pretty much identical to the new antenna finish.

Simonized said:
I don't think I'll bother with the newer version, sounds like DS or AA voice clips. You'd think they would have added different chirps and perhaps generally made it worth the extra money it costs compared to the original since it is supposed to be a limited edition/run (the new box doesn't count lol). As it stands it sounds like you're getting something that's not as good as the original but costs more money.
Click to expand...

To be fair, they probably cost more to make now, I think Wand Companies price point is extremely fair considering what you get compared to other high end prop replicas, I've never had any complaints about their pricing.

I'm ok with the $30 more considering everything that's going on in the world to raise prices on everything. The new Wand Com is just as good as the old one, but the new voice files are a severe downgrade in my opinion.

Just got home from work. Here is a quick pic. I wish they would gone in a different direction with the holster. Now where’s that Tricorder…L! 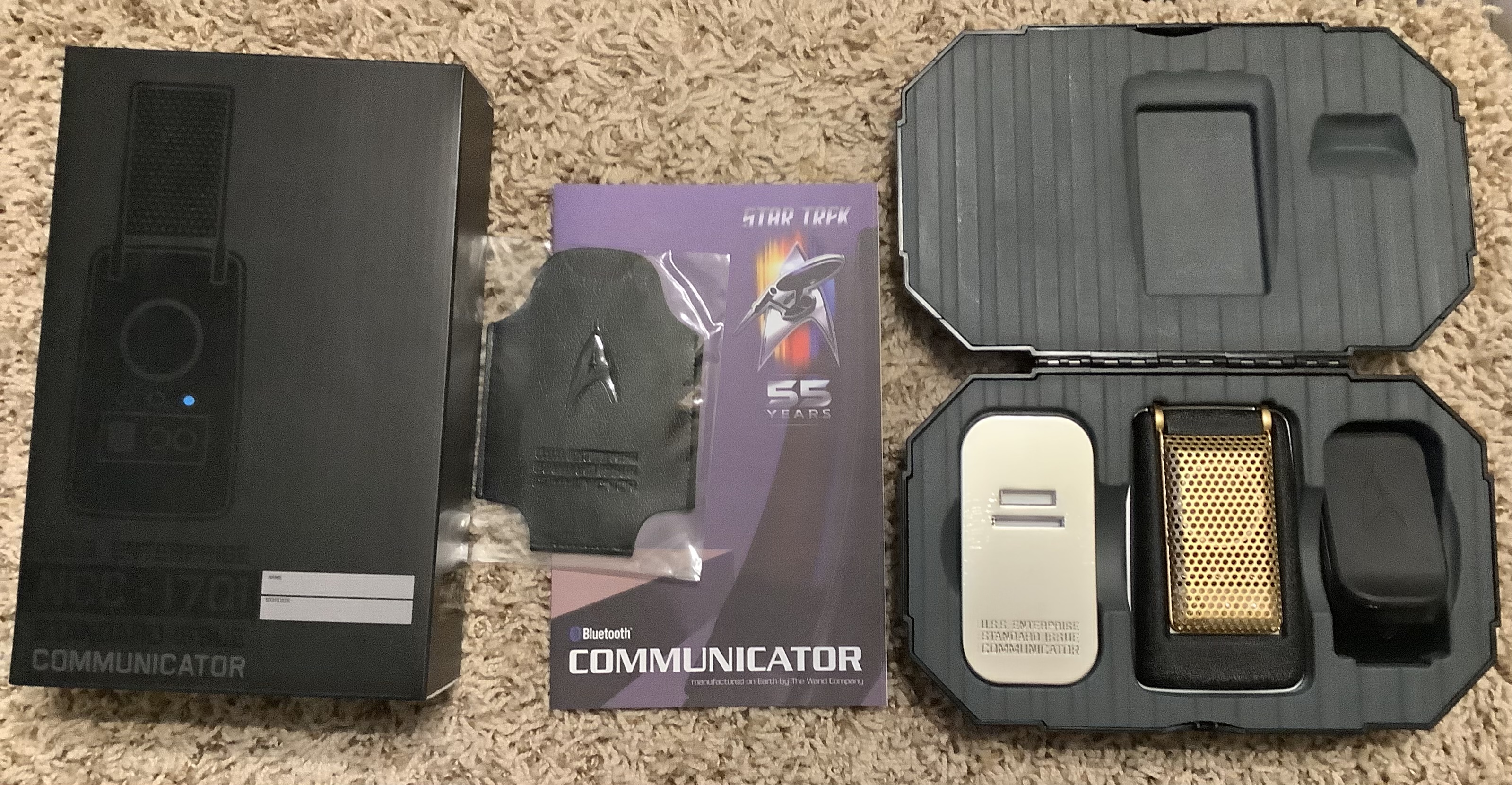 I'm selling both of mine if they go for that!!! LOL

What's the chances with this reissue and the tricorder coming the TOS phaser gets re-released as well?
A

All along TWC has said they are not going to reissue anything but then they did the Comm without anyone knowing about it. I would say it is a toss up at this point but if the Tricorder sells really well they may do it.

I've suspected that the comm reissue was to build funding needed to kick off the manufacture of the tricorders. It makes sense to me and also helps gauge the current state of the monied fan base.

I picked up the reissued comm recently and will be getting the Tricorder when its released. I am going to risk it and hold off buying an after market phaser in hopes that they will reissue it to complete the "exploration set" all with updated packaging etc. A replaceable battery for the phaser would be an added bonus as well.