So I have now got to the stage in the project where I want to make a proper thread for it...

As some of you know I made the Unused Voyager Tricorder based on Rick Sternbach concept designs, finishing the project last year.

That prop used various modules and custom boards jammed into a tricorder chassis... While it worked it wasnt without faults. The electronics were fragile and 1 led died while making the video for the project.

And last year I was going to make one for someone, the plan was simple. Take what I made already using the modules and incorporate most of that into a single pcb design. That way it would be easier to fit, and should also not break down if you stared at it too harshly.

So i came up with this design, 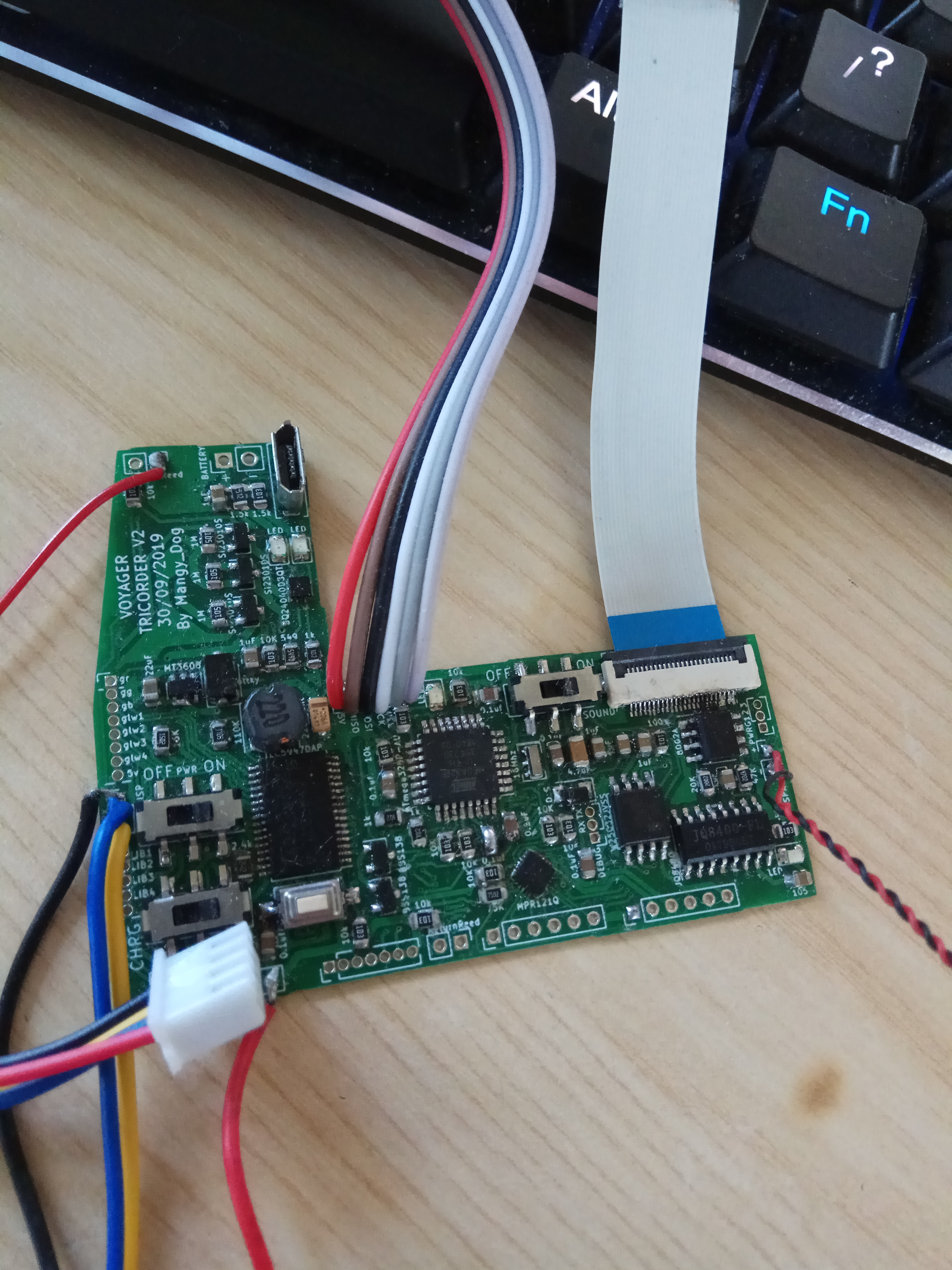 Quite simple really, It really was pretty much just the original circuit but in a single board.

At this time I was still using a nextion display to drive all the animated graphics. This was how it worked in my first build.
I've never been a fan of Nextion. In fact these days I down right despise them.

As i have eluded to in the old thread, the LCD quality had drastically dropped since I made my first build...


This was last November. I wanted to get this prop to him for Christmas..... But because of this terrible quality display, it wasnt to be.

I and the friend I was making one for were not happy. So I made a promise. Give me time, and Ill develop a whole new system, one where I could control all the hardware that went into this, including what display. This way I could promise a high quality build.

The thing is, i knew this wouldnt be a quick thing. Before hand I had considered making this new fully integrated system, but this quality issue forced my hand.

The plan, make a robust PCB design that included an FTDI/Bridgetek Eve graphics co processor chip. This chip not only would mean I can run any RGB parallel based display I like, but ultimately would provide a far higher quality of image rendering, and UI control.

Nextion wouldnt let me animate locations of objects. Everything was static, all I could do was change an image or push something forward in the image layers to make things appear. While it worked for the effect ultimately it was a cheap trick. Here I can now render real UI elements through code and script. Making a far higher UI quality experience. Heck if I wanted to I could make fully functioning UI with real data.....

The downside was time. Not only did i need to develop a new PCB design, I needed to make a prototype for the display as I had not build one from scratch before.

That was the easy bit. 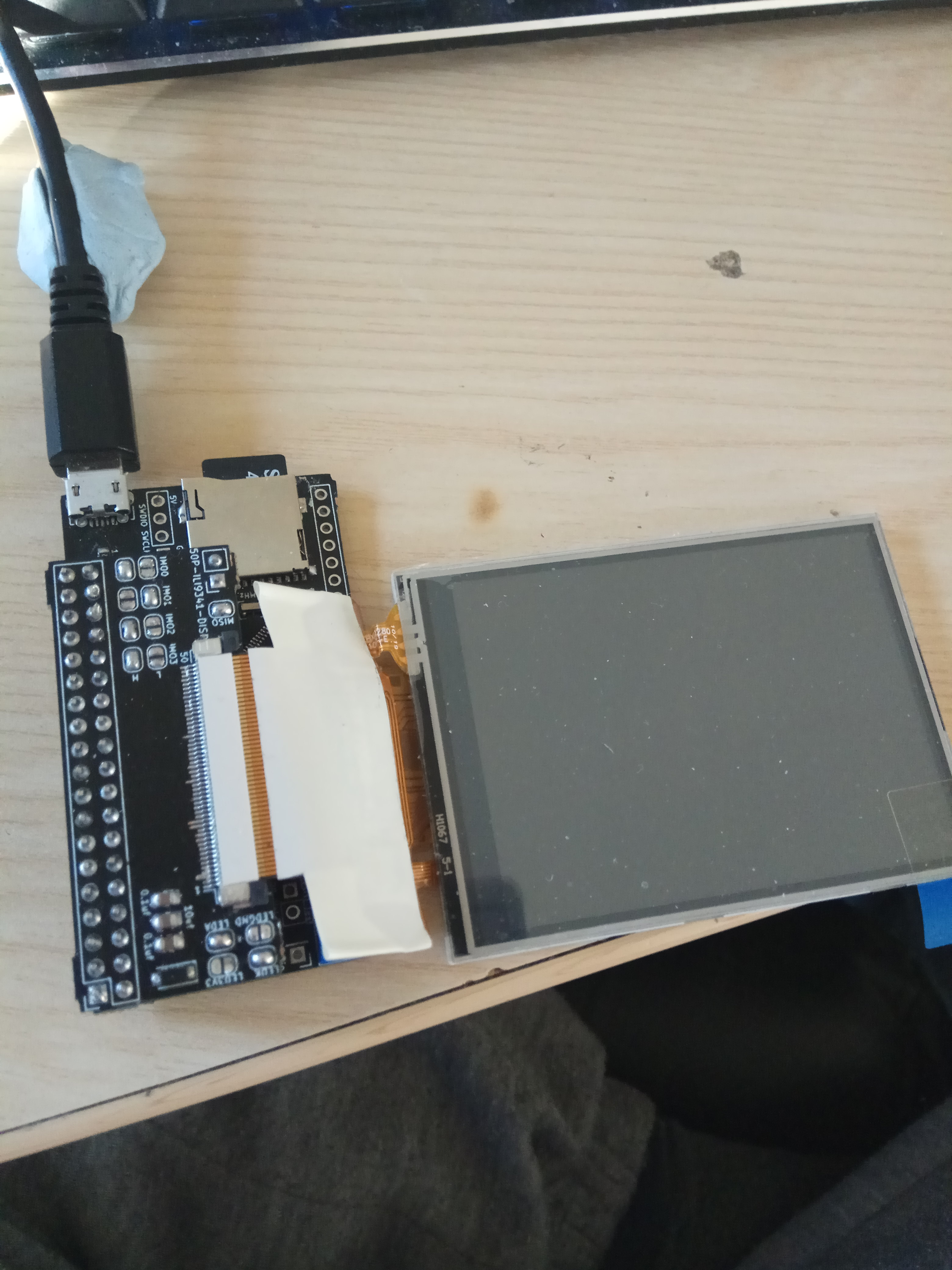 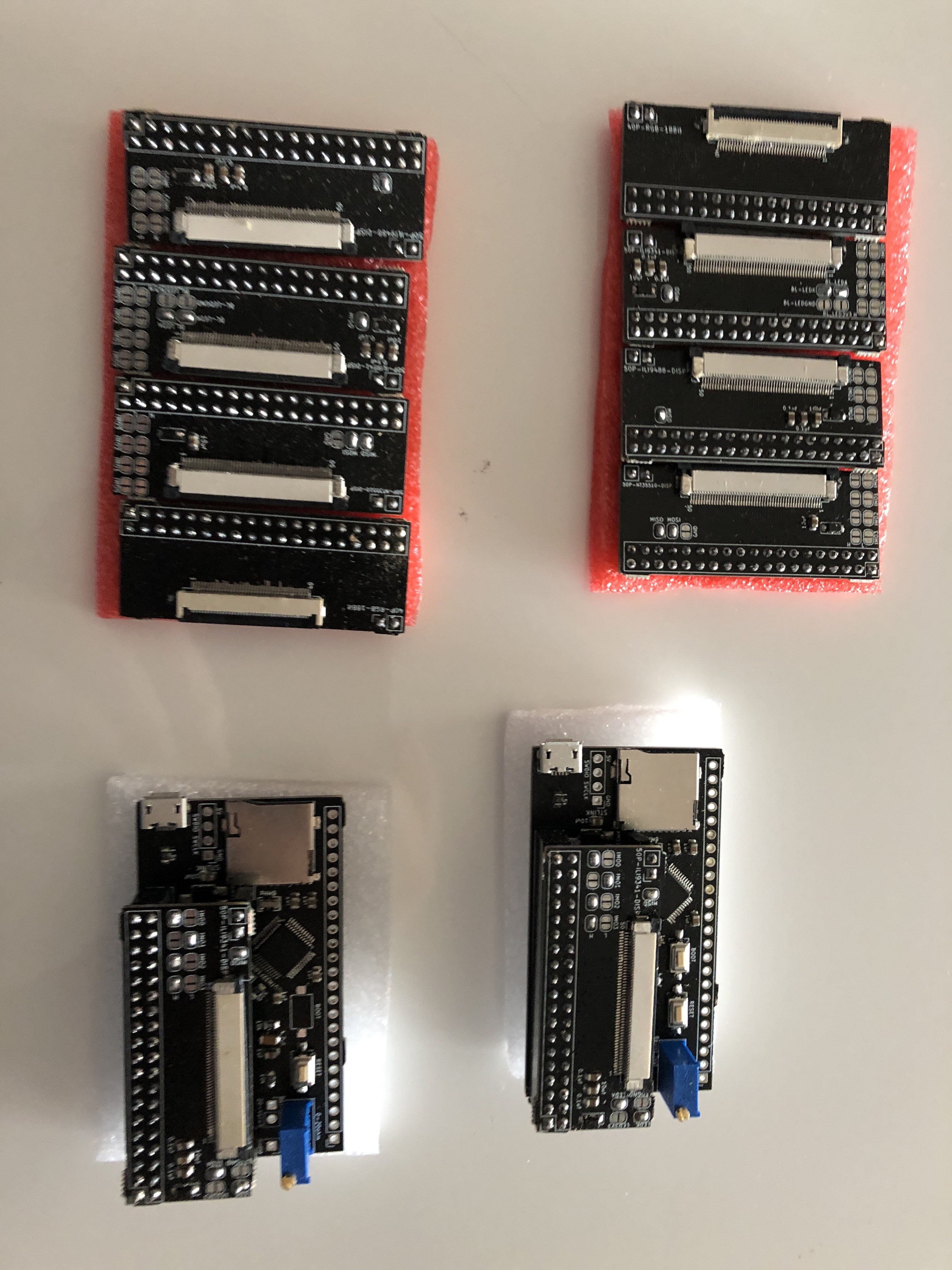 This didnt take too long at all. By around March I finally managed to get a working display prototype (after fixing a few stupid little design mistakes in the PCB)

With these I was able to do a few tests to see , 1 if it would work and 2 how best to run the tricorder code. Including picking good quality displays.

This dev board includes a breakout that could fit a whole array of different popular LCD connections. (within the rgb parallel style)

And as an early UI test, I made this.


From there, I took the design and began working on the design for the new tricorder PCB. And over the next several months (till now) I went through too many PCB revisions and designs, often correcting mistakes I had made or over looked. 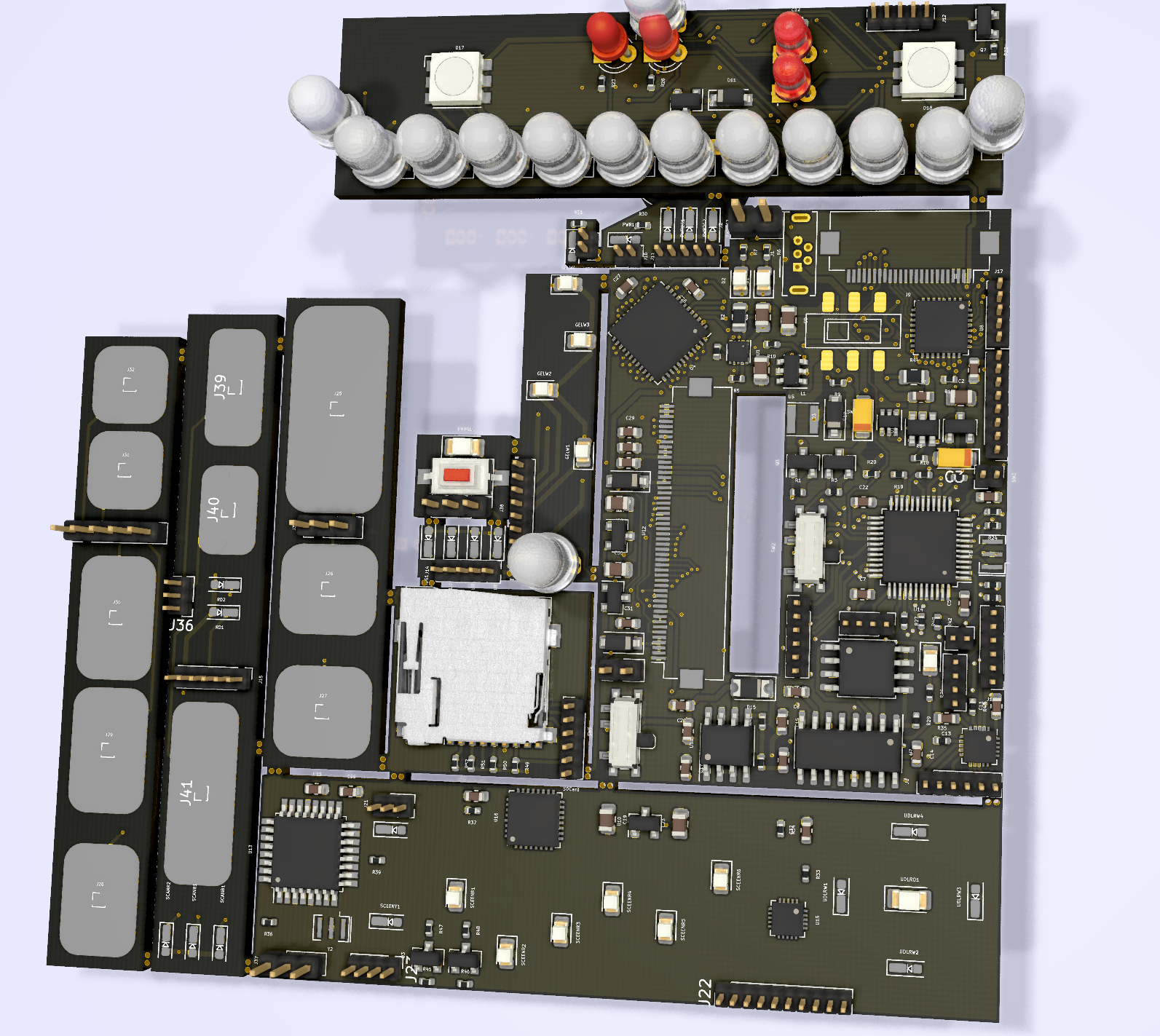 Above is an earlier render of the PCB during the design.

I went through around 4 or 6 PCBs designs and orders, constantly correcting stupid little mistakes I missed, before I finally have this! 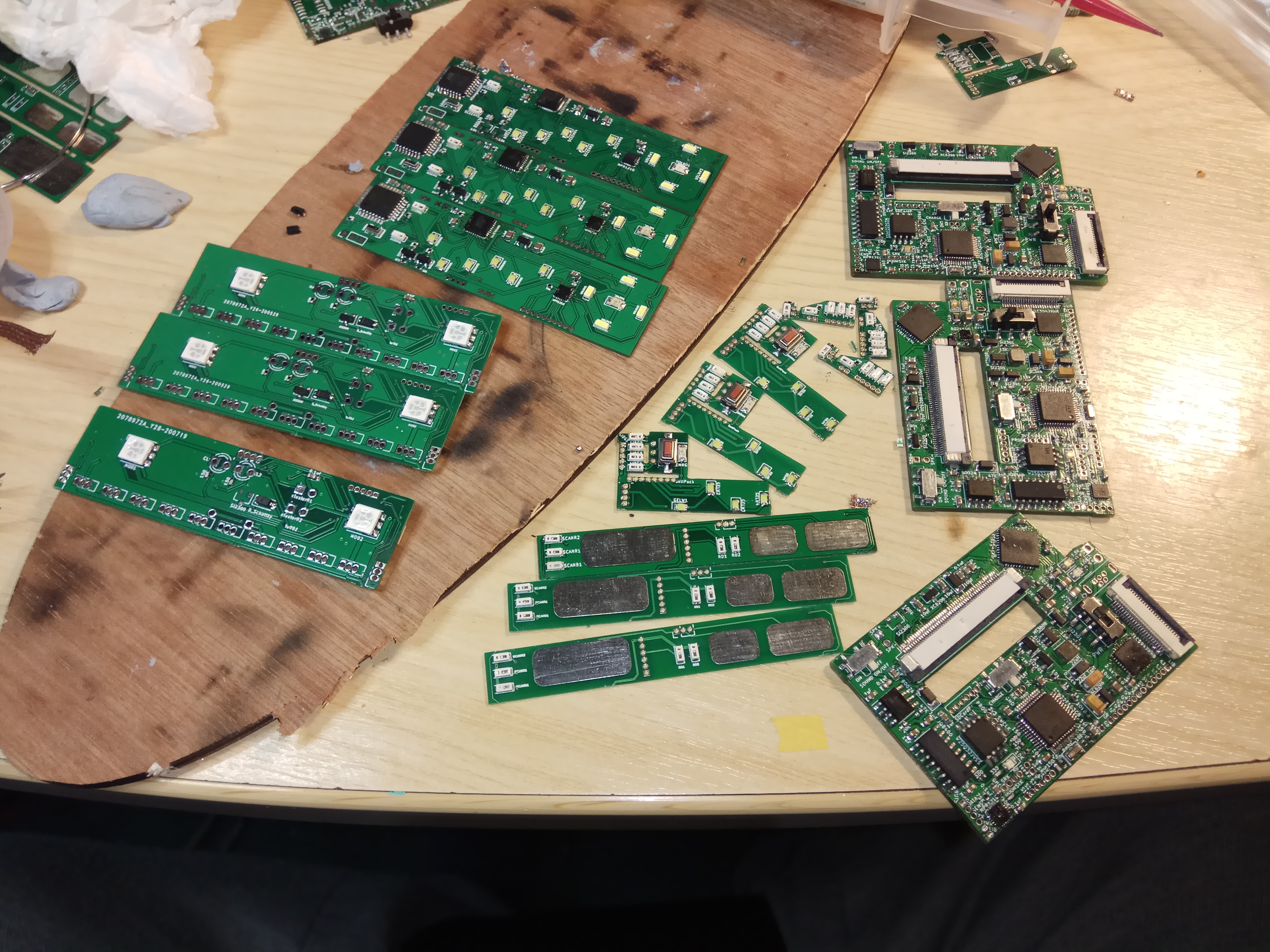 Now Im still a fair bit away from finishing this, and while I still hope to have this finished by chirstmas to send out one to my friend. Its going to be tight.
There should no longer be any more suprises electronics wise. This "SHOULD" work... The only real issue I still have is.... ........

I need to write a HUGE amount of code.

Writing that little UI test took me several days. And I need to make that for every single UI display page. Some are far more complex than this one. I also need to port most of my code from the old version over to this. As well as create a new serial interface two way protocol between the main board MCU and the door based MCU...
This is one of the new developments. I have reduced the number of wires going through the hinge, from 12 down to 4. Because of this reduction, I can run insulated multithread wires through the hinge now. 2 wires for power 2 for rs232 serial. So there should never be any risk of the connections breaking or wearing and shorting, a fear i had with the original enameled wire setup.

But this all just offloads more complexity to the software design.

As i need to handle all the led data and button presses through this same serial interface. Im hoping this wouldnt introduce any lag or perceivable delay between presses and beeps, but only time would tell.

The next major change is the prop chassis itself. 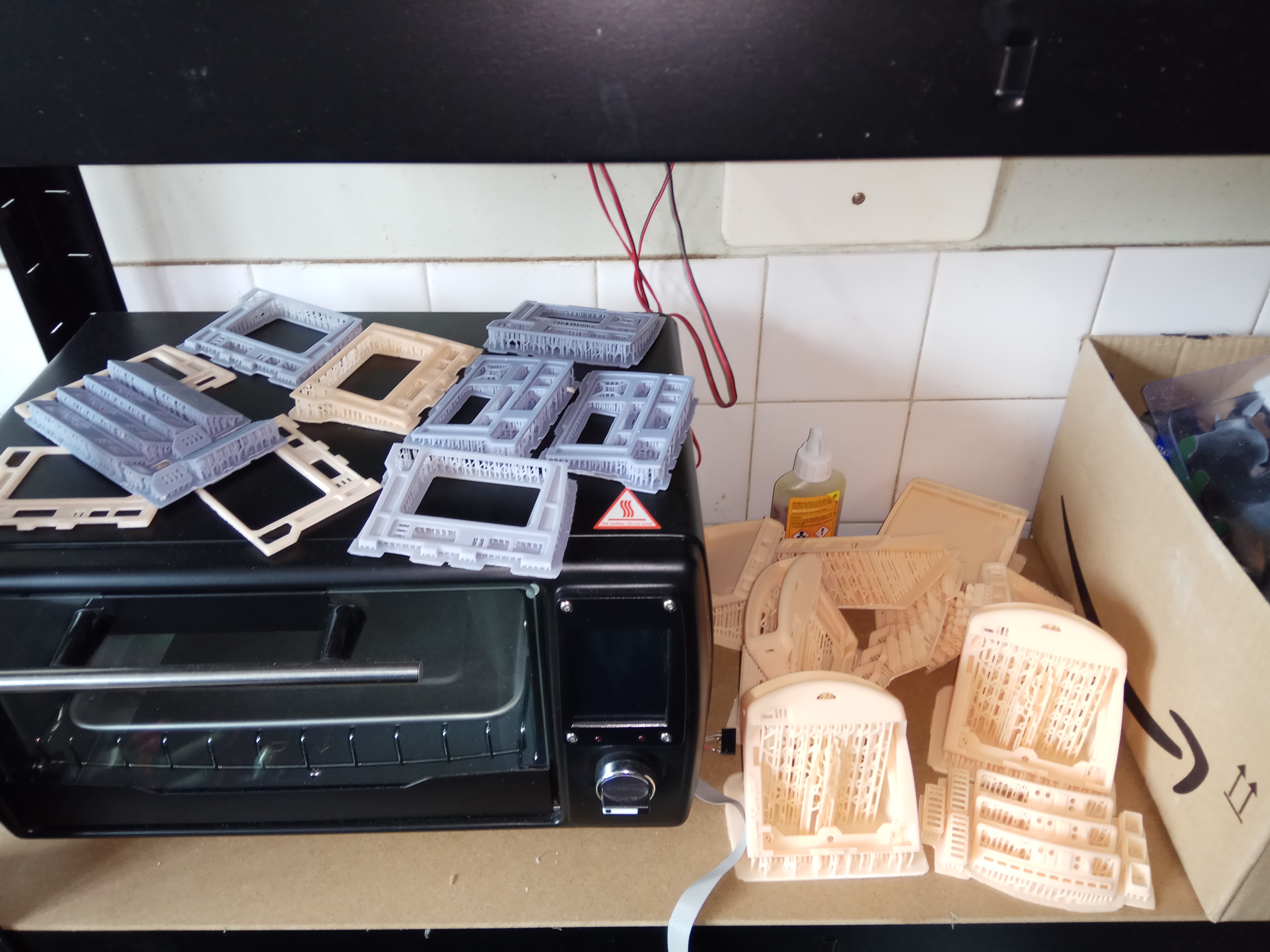 Before where I FDM printed most of the parts, I am now trying making all of this with the resin printed. not everything has come out perfectly accurate and I may need to do some filler correcting but it should ultimately reduce post processing. I also used an ABS like resin so it shouldnt be as fragile as usual resin, though maybe wont stand up to real ABS strength, it should still do really well.

So here is where I am now. Still A LOT to do. And at the same time trying to get some gains on the stargate.... I kinda feel bad as I feel like ive been really slow on a lot of things, but if anything I kinda think I might be stretching myself a little thin. Anyway hopefully it wouldnt be too long before I have more updates...
Last edited: Sep 11, 2020

I understood about one word in 50 here, but I am blown away by the dedication and ability. Wish I had paid attention in physics class when we did electronics. Was that Physics class? 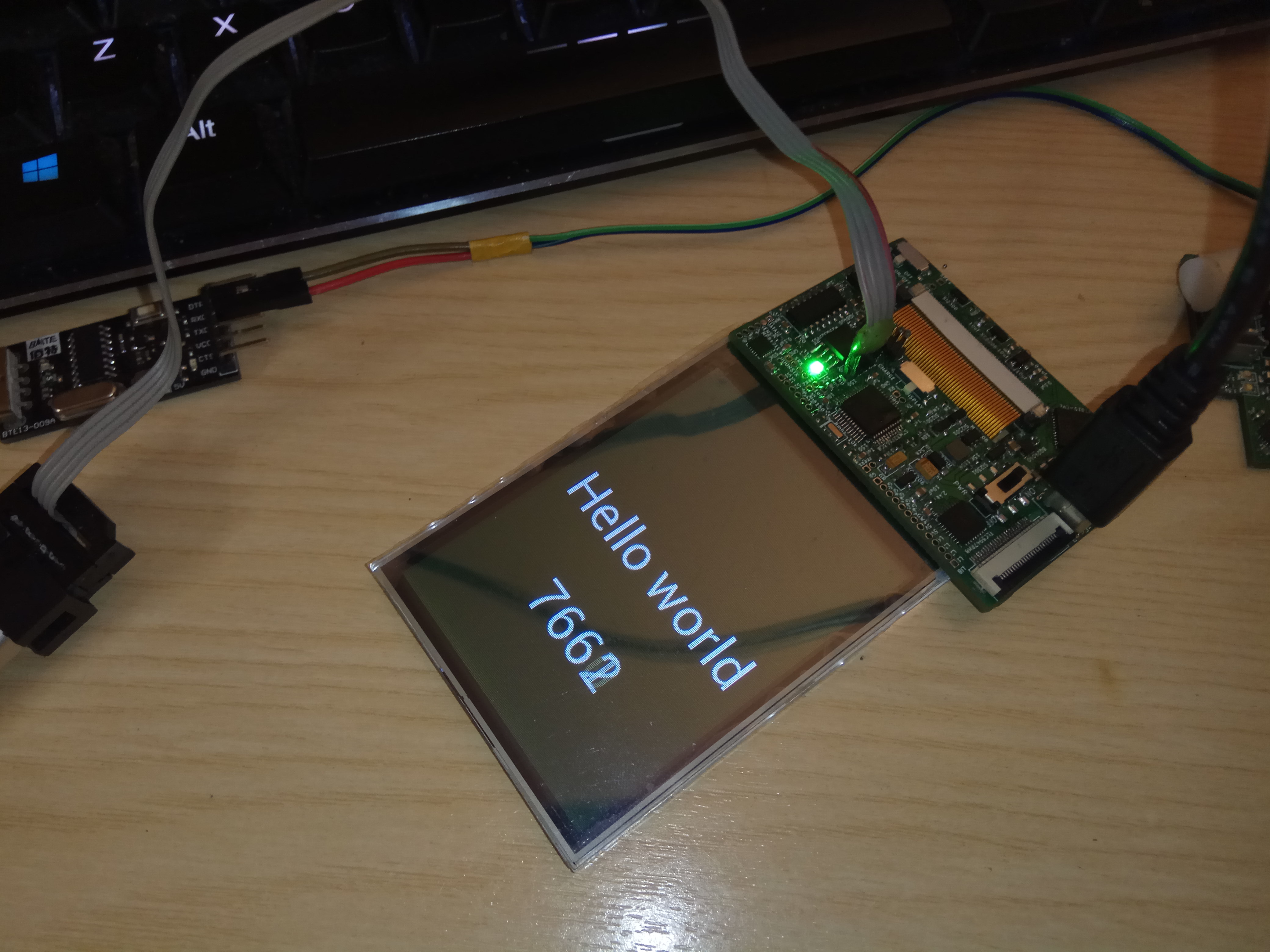 Was genuinely getting worried there..... After putting these three boards together, none of them worked. The MCU would power up but nothing worked on the display side. Ive been soldering and desoldering all weekend and I started to think there must have been some design fault..... but no... Luckily.

Just the solder i have is crap. And while some chips looked soldered up with contacts on pins, many wernt.

After literally checking each and every connection with a tester i managed to find and fix all the bad connections. And now have a working board.... Thank fook for that.

Ill go over the other two boards now get them working and then solder up the daughter boards to test the led circuitry.
Once im happy everything is behaving ill start assembling them into the chassis.