The Ultimate Guide to Lightsabers eBook

RPF PREMIUM MEMBER
2018 Update!
The guide is now live on the front page of wannawanga!

So if you're anything like me, you forget to bookmark pages, and you frequently have to go searching for information on this saber or that saber. For awhile I've been wishing there was a master thread or site that had all the information the RPF has come up with on lightsabers. Like Parts of Star Wars, but something lightly more updated than a geocites page.

I decided to make my own wish come true. After doing the lightsaber tree I had all the photos and information at hand-- but what that chart lacked was the lore. I put all these things together and decided to make an all-inclusive, cover every OT saber ever guidebook that talks about the props, their history, their individual parts and accompany it all with the highest res bestest photos I could find.

Before I go unleashing it to the world, I have shown it to some of the vets here for input, and now I'm hoping to sort of beta-test it with the rest of the RPF.

See anything that needs correcting? Anything to fight over? Post it!

Beautiful, just had a quick flip through got my reading for the next few nights now, will keep you posted. most interested in reading up about the shared stunt ROTJ (looking forward to Spirit of Ob1's run).

RPF PREMIUM MEMBER
This is AWESOME. Very nice work. I've always been confused about the Luke/Obi shared stunt and when/where it was used, now it makes sense. It's nice to have all of this info compiled in one place.

RPF PREMIUM MEMBER
I suddenly sensed great disturbance in the Force. It's as if a million prices just suddenly rose up and things... suddenly vanished.

Also, besides some grammatical errors, this is pretty dope. And I'm not saying that because I was (to my surprise) mentioned in the book.
Last edited: Jan 15, 2017

RPF PREMIUM MEMBER
WOW!! So great!
Print this as a book and I will carry it around like a bible! I am a true believer of the Force

Already see I need to change the line about the V2 having even grenade rings after the new video...
I

Wow! That is all. (apart from Thank You).

PoopaPapaPalps said:
Also, besides some grammatical errors, this is pretty dope. And I'm not saying that because I was (to my surprise) mentioned in the book.
Click to expand...

I was really struggling with tenses-- speaking in past tense about how props were made vs. present tense as to how they appear when we look at them now.....

SethS said:
I was really struggling with tenses-- speaking in past tense about how props were made vs. present tense as to how they appear when we look at them now.....
Click to expand...

I can dig it but I mean things like this (the ROTJ Vader segment):

Also crafted by Bies, it was built on top of a maglightflashlight to easily Vader unscrewing the cap to inspect thebatteries.
Click to expand...

There's also some other quibbles throughout, I'll have to go read it again to make a proper list, but it's pretty thorough. A couple things I'd add/adjust concern mostly the two ANH Stunts (semantics but you're striving for accuracy): in the ANH stunt segment, you refer to color on the neck as being "copper" to match the original, but copper is seen on the re-dressed Shared Stunt, the original was brass (as you know, I'm sure); in the Shared Stunt segment, there are two holes on either side of the clamp on the bottom (or rather, the top as the clamp is upside down) along with the scuff in the foil tape.

And without getting too into it, the "Sail Barge" may be a hollow resin cast of the ANH stunt, possibly of same lineage to the "Artoo launcher", given the cast clamp and, well, it's hollowness. A surviving cast is glimpsed in the Discoveries from Inside the Vault clip.
Last edited: Jan 15, 2017

RPF PREMIUM MEMBER
Cool-- thank you-- I banged it out pretty quick and despite my working writer status I'm an insanely terrible typist. I think I have two sentences happening at once there.

And don't get started on your bronze/copper/brown/orange niggling ;P

...I'll bust out the pantone color swatches if I have to!

(even though you're correct)

Obi-Wan's hero had a bronze neck, the stunts were mostly matte black to cut down on light bouncing during the duel. To approximate, the necks were hit with bronze, likely on top of the black (as we're noticing on the V2 right now!

The V2 was scraped down to look how it looks.

The V3's neck was painted copper, which the Yuma and close-up "hero" emulated.

PoopaPapaPalps said:
in the Shared Stunt segment, there are two holes on either side of the clamp on the bottom (or rather, the top as the clamp is upside down) along with the scuff in the foil tape.
Click to expand...

I said " foil tape surrounds the clamp; a round hole is present below the oval slot and to the left of the square hole below it through the tape and clamp; a second hole, just in the tape, lies on the other side"

I think we're saying the same thing? Minus the scuff part-- or is my description unclear? I THINK I'm describing what you're saying. I can't find the pic now, but it looked like one hole was just in the foil tape.

Didn't realize the clamp was upside down-- thanks!

PoopaPapaPalps said:
And without getting too into it, the "Sail Barge" may be a hollow resin cast of the ANH stunt, possibly of same lineage to the "Artoo launcher", given the cast clamp and, well, it's hollowness. A surviving cast is glimpsed in the Discoveries from Inside the Vault clip.
Click to expand...

I can be more general about it-- but I recall that from the video.

What do you make of the pic on the V3/share stunt page in the bottom right. I included it cause it was rigged with blade for dueling, and the color looks Yuma-ish... but I'm just now seeing a very black booster section.
Last edited by a moderator: Nov 9, 2018 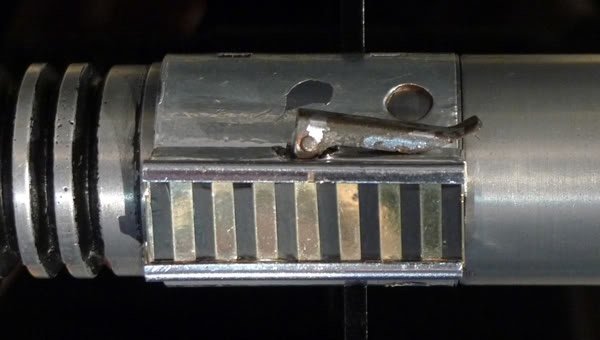 Although I have seen many of these props at Skywalker Ranch over the years, I'm not qualified to comment on the accuracy of what's been written and documented.

That said, I would like to say how grateful I am that you have taken the time and effort to compile this which I know - with the added input of the true guru's here - will result in a saber-bible long sought after.

Thank you very much.

This is a wonderful document to have, Thank you for putting it together and sharing. :thumbsup

Beyond Impressed, Thanks for Sharing this, a fantastic read through on my tablet and quick resource guide
V

That was awesome, thank you!

Seth-
Fantastic work. Thank you for your tremendous effort in bringing this to life.

Another pat on the back from me. Great work!

Sent from my SM-G900V using Tapatalk

Is there a source for a McQuarrie Vader Helmet that isn't the EFX one? Fan Made Maybe?

Today at 5:32 AM
Derelict Ghost